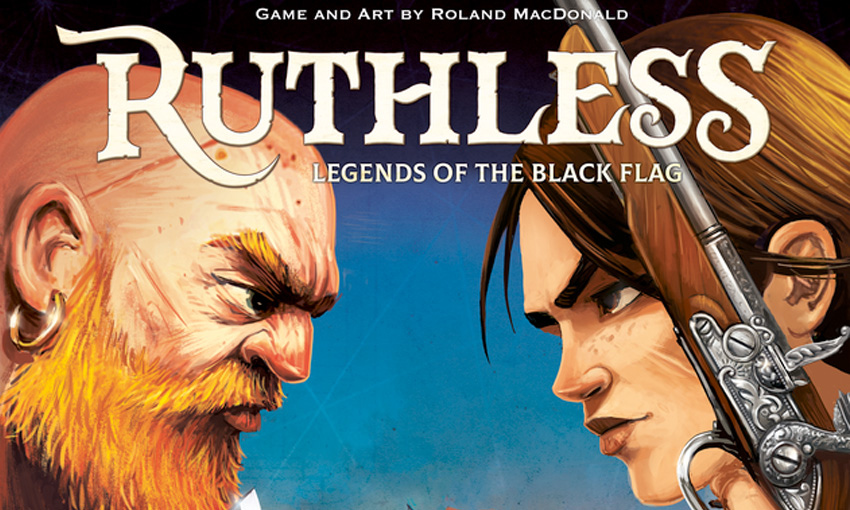 Ruthless: Legends of the Black Flag is a great twist on the classic beats of a deck builder, and features good art and clever gameplay.  While it's not revolutionary by any means, it adds some neat decision points to keep you thinking strategicatlly.

You might think that piracy is all about looting treasure or amassing the toughest, roughest crew, but in Ruthless, the truth of the matter is that your goal is to become the most notorious pirate around!…by looting treasure and amassing the toughest, roughest crew around, of course.  Starting with nothing more than some powder monkeys and a handful of doubloons, your task in this deck building game is to build up your crew, form raiding parties, and carry home all the riches you can plunder!

In Ruthless, each player’s ship is represented by their deck of crew & treasure cards, and at the start of the round, players will draw themselves a hand of 5 cards.  Then, each player will take turns playing cards until none are left in their hand. 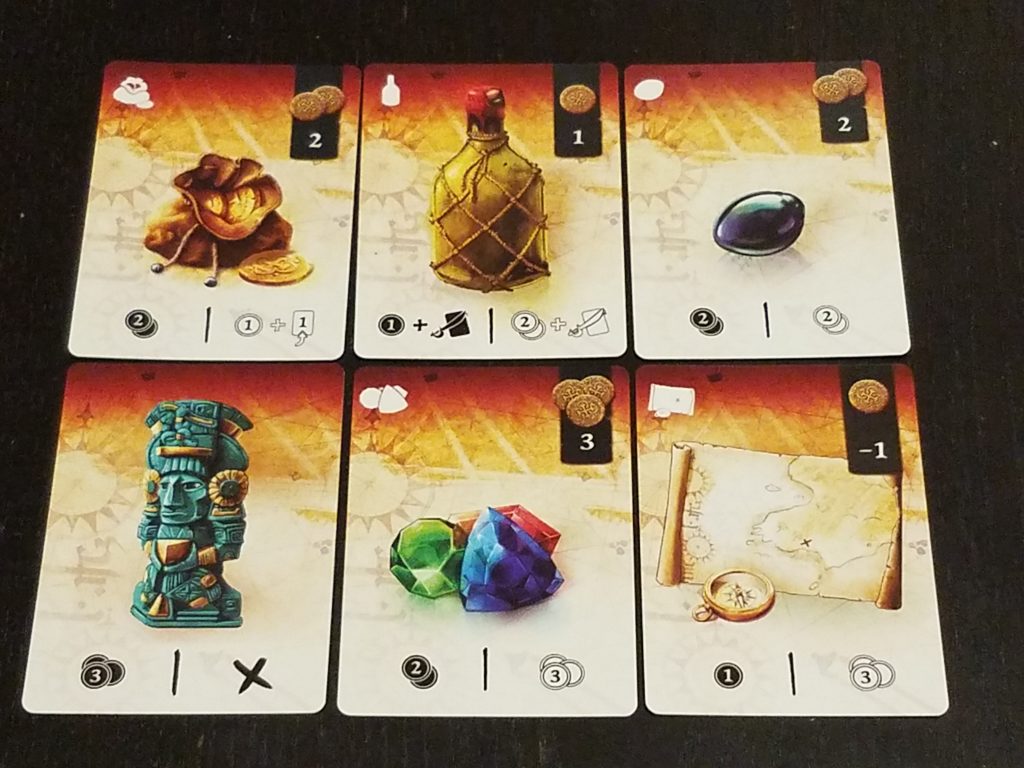 Jess: This is a departure from a lot of deckbuilding games, where you play as many cards as you can, dump the rest, and redraw immediately.  Ruthless is a surprisingly short game, only lasting 5 or 6 rounds, so every card play can make a difference! 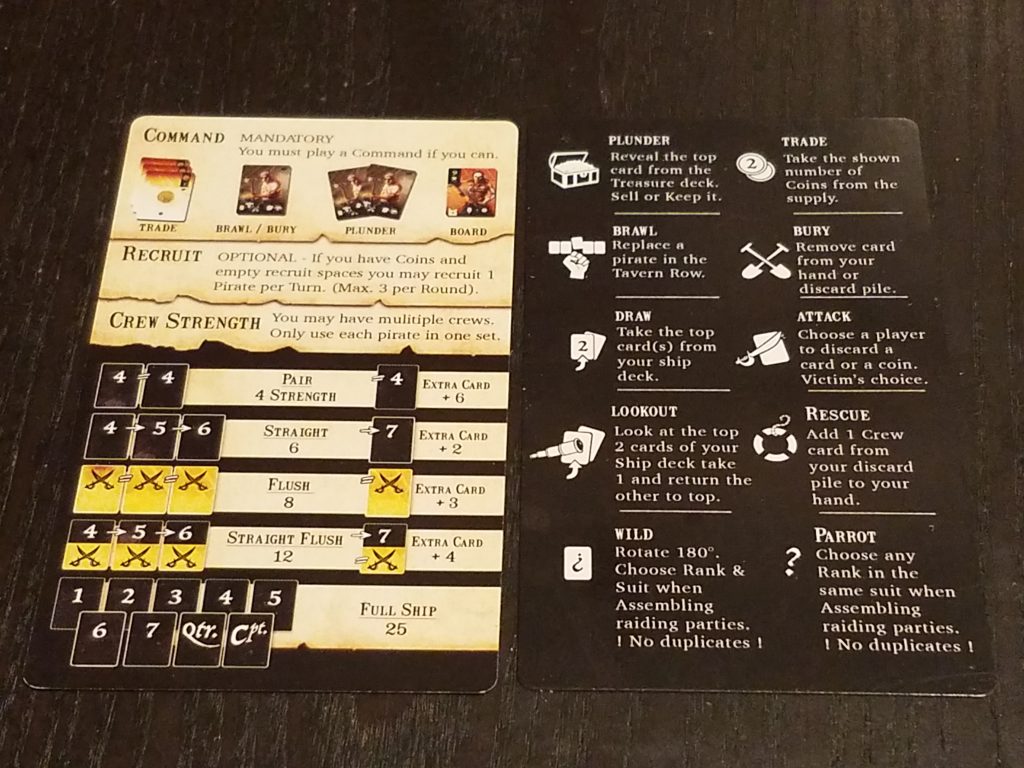 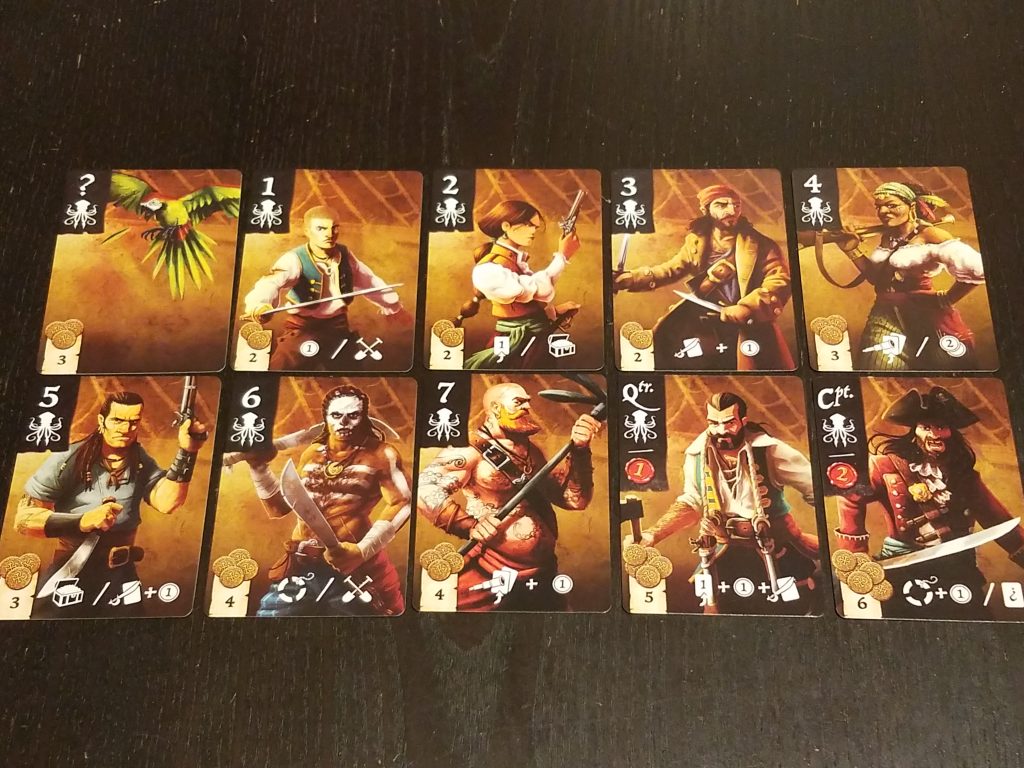 Once you have taken your mandatory command action, you can optionally spend coins to recruit pirates from the Tavern row, adding them to your New Recruit area (and eventually to your discard pile to be drawn on future turns). 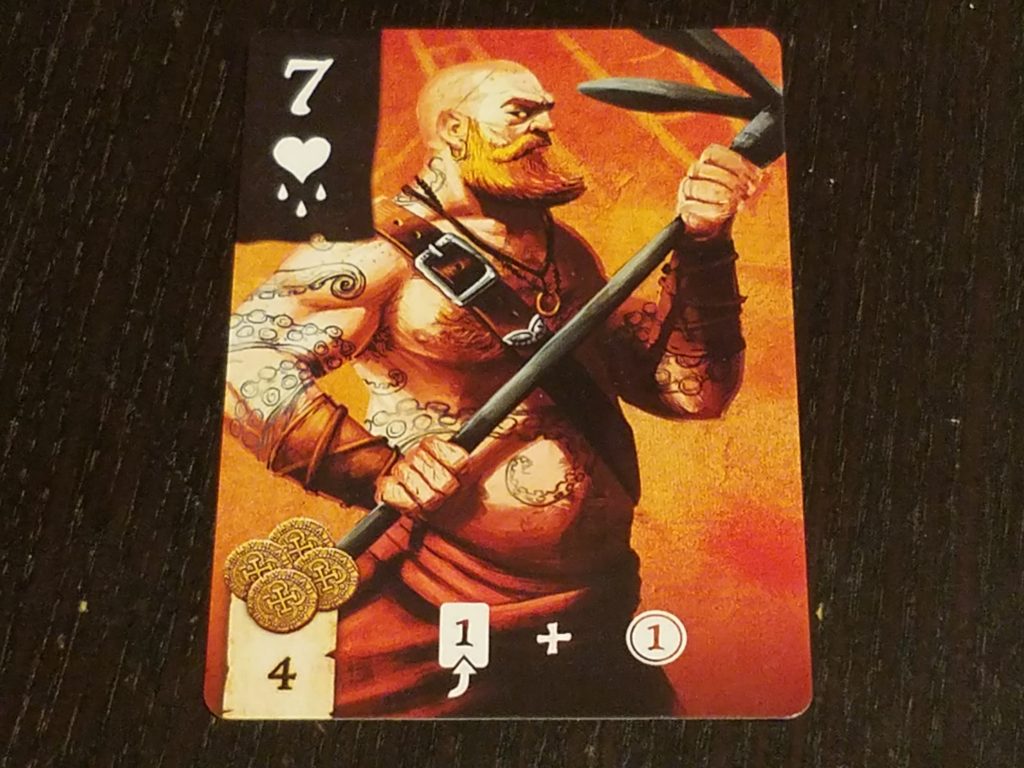 Jess: The Board action is really powerful – pirates have all kinds of useful abilities, like getting coins, drawing extra cards, and manipulating draw decks!

Andrew: Ruthless splits off from traditional deck builders in a couple of really cool ways.  You already mentioned one of them, where you play each card in your hand one by one, rather than just burning through your whole draw at once.  But another cool thing is how all the pirate cards you use for the Board action come back at the end of the round. 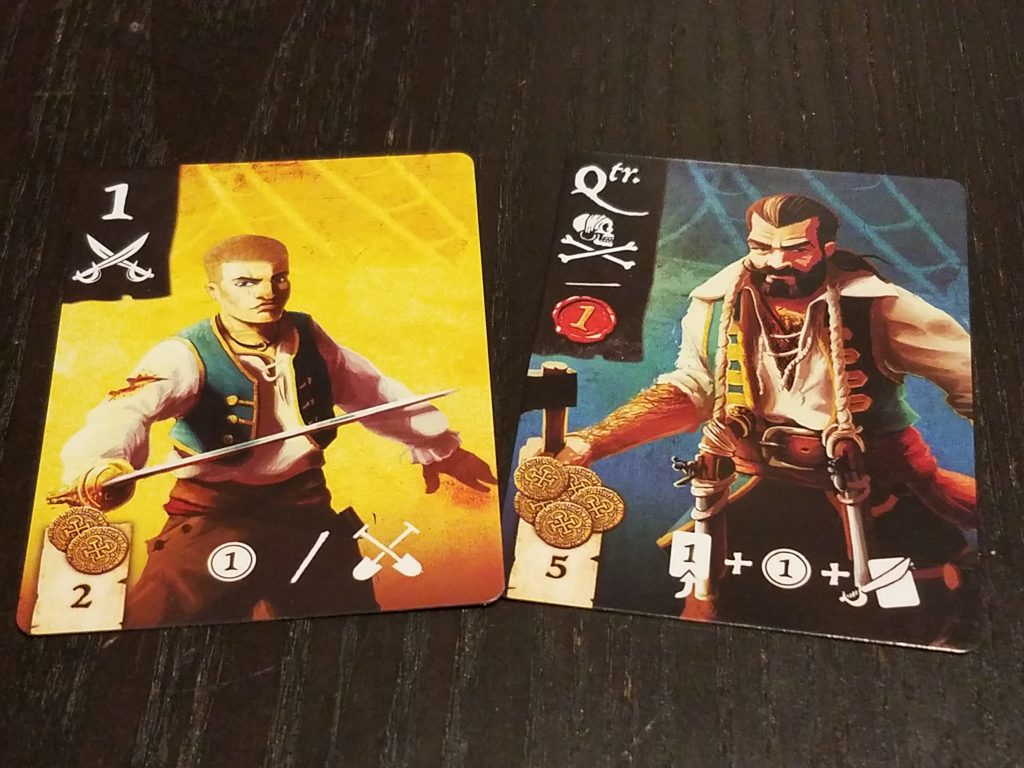 Once all players have emptied their hands, they will form raiding parties from the cards they added to their Ship area over the course of the round by using the Board action as well as any recruits they’ve hired over the round.  To form raiding parties, players will combine their cards into as many poker-style combinations as possible. 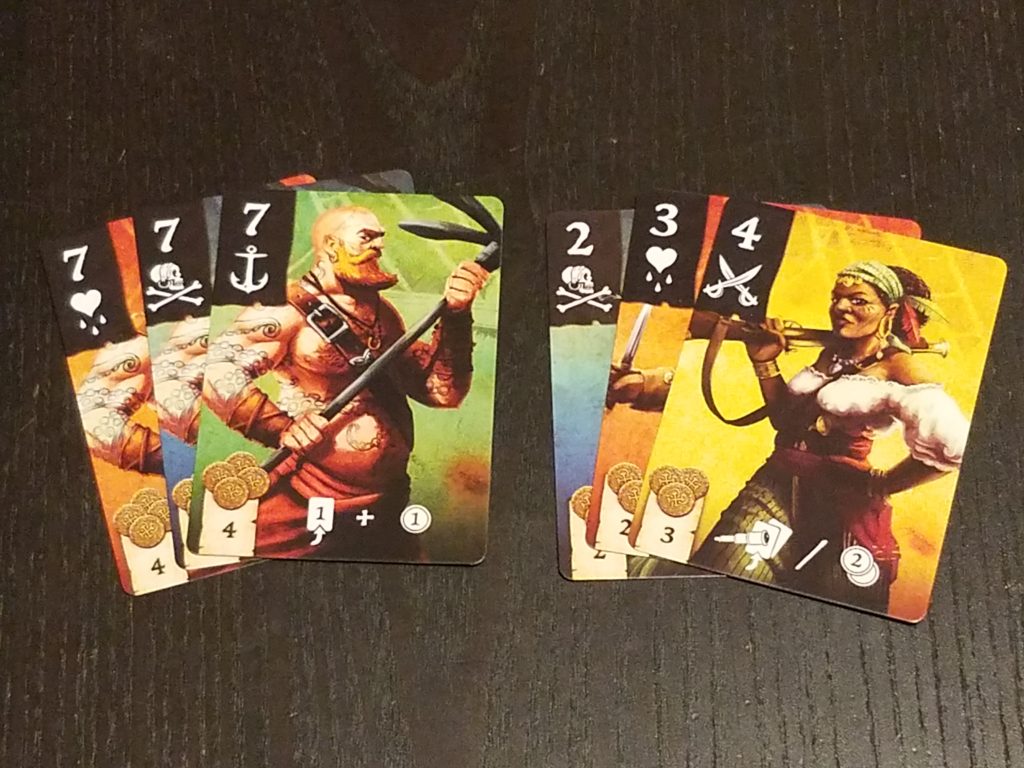 Each combination imparts a number of Strength points.  In the first two rounds, all players who manage to form a raiding party of at least Strength 4 will get a single Notoriety point.  However, from the 3rd round forward, players will compare total Raiding Strength, with more Notoriety going to players who have higher Strength. 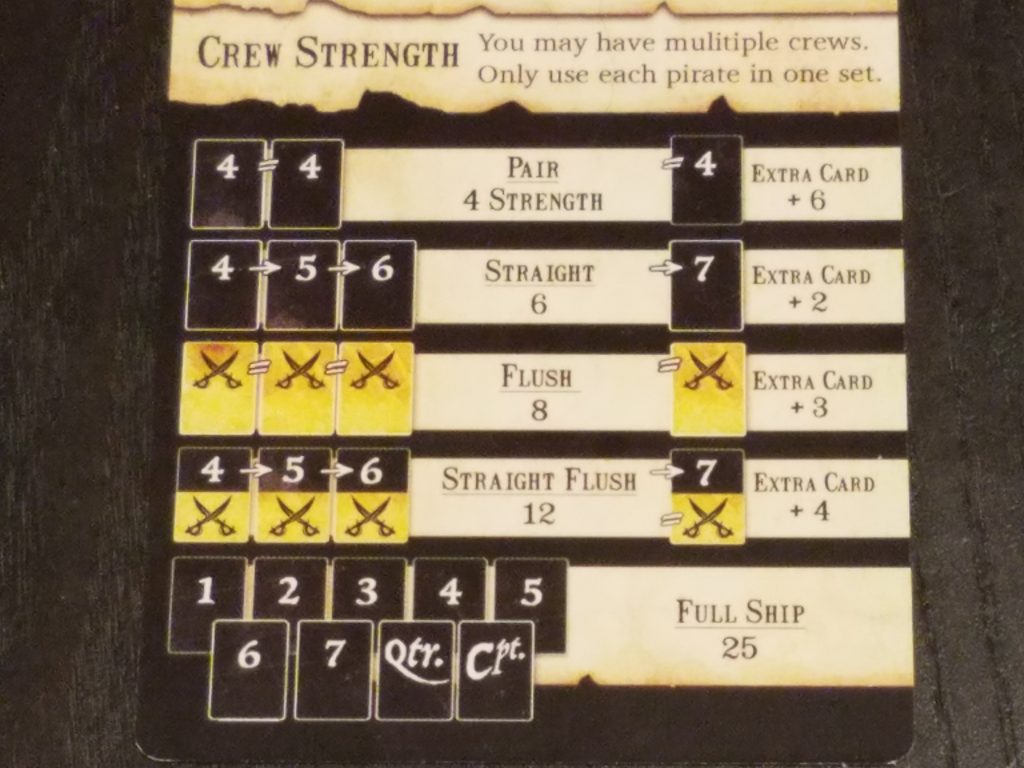 The game ends after a set number of rounds (based on player count), and then players determine who gets bonus points from Legendary Achievements, add up all their Notoriety points, and the player with the highest score sails off into the sunset victorious! 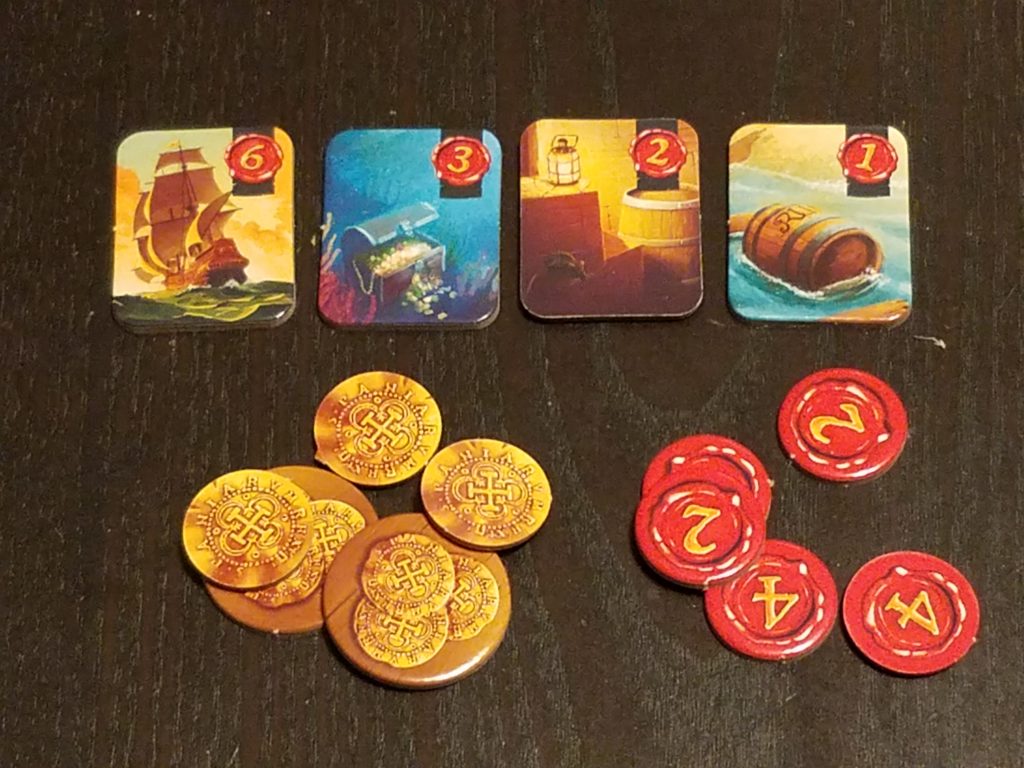 Andrew: I have to say, I really enjoyed Ruthless.  It’s just enough of a twist on the core deck building concepts that it keeps it from feeling generic, but familiar enough that it’s easy to engage.

Jess: I agree!  I also really liked how you had a few key strategic choices over the course of the round, like when and how often to bury cards, whether to take coins immediately for treasure or stack them away for future use, and what cards to add to your deck.  Ruthless isn’t complicated, but it’s not ‘dump all my cards, buy the best card from the trade row, and be done with my turn’ thoughtless either.

There are a lot of great deck builders out there, but Ruthless earns its place on the shelf with its great artwork, slick gameplay, and satisfying scoring mechanisms that works well at every player count.  For those looking for a unique deck building experience, we definitely checking out Ruthless!

Ruthless can be ordered directly from its publisher, Alley Cat Games, who provided our review copy.

Suggestions based on Ruthless… 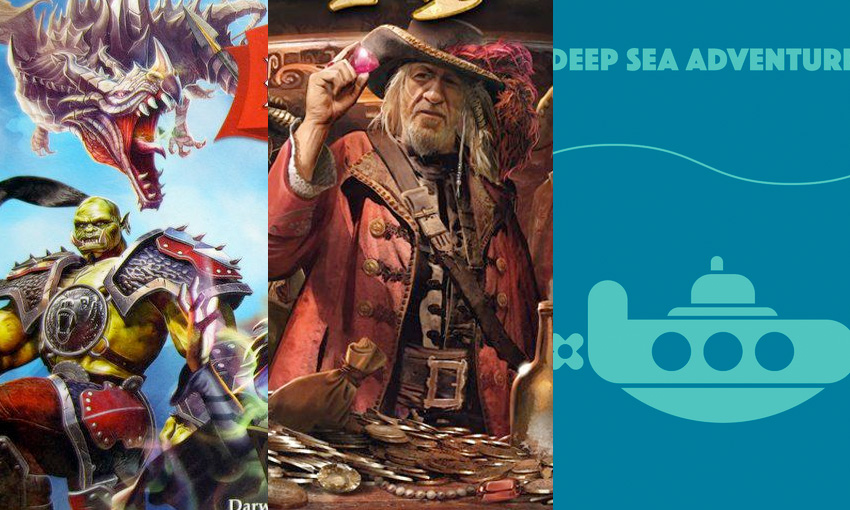