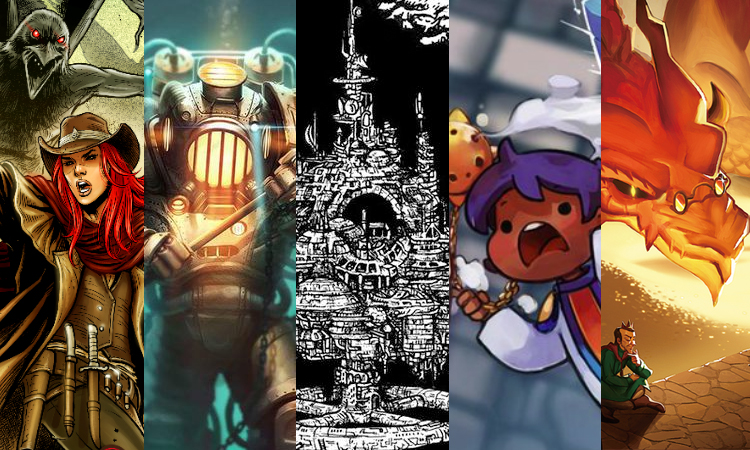 It’s Kickstarter time! What have I been checking out this week? Let’s find out!

The Few and Cursed: Board Game 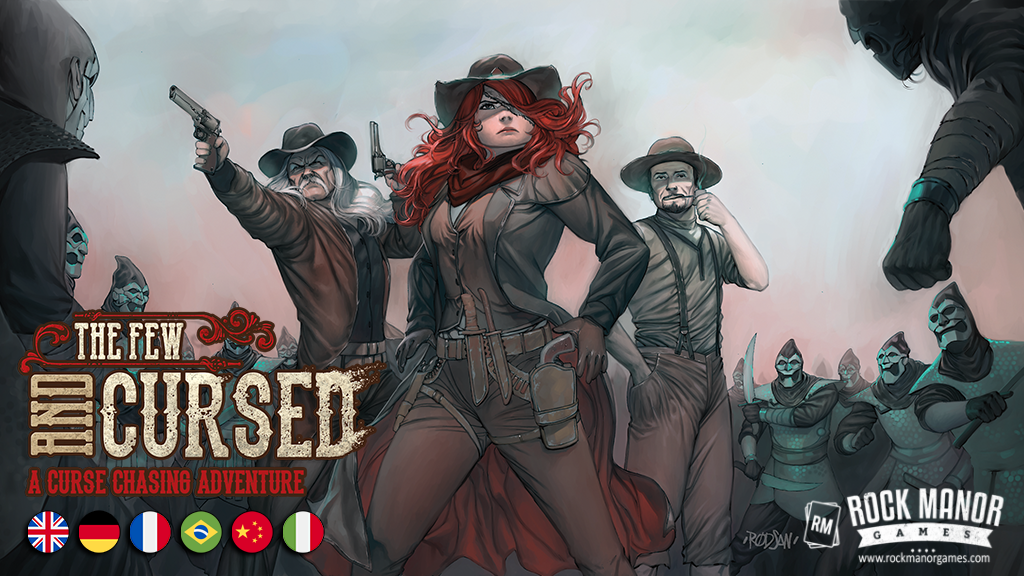 The Few and Cursed: The Board Game is a deck-building game designed by Mike Gnade (Brass Empire & Maximum Apocalypse) and based in the Comic Series of the same name. In a post-apocalyptic wasteland water has become humanity’s most precious currency and people are willing to practice dark magic to get it. 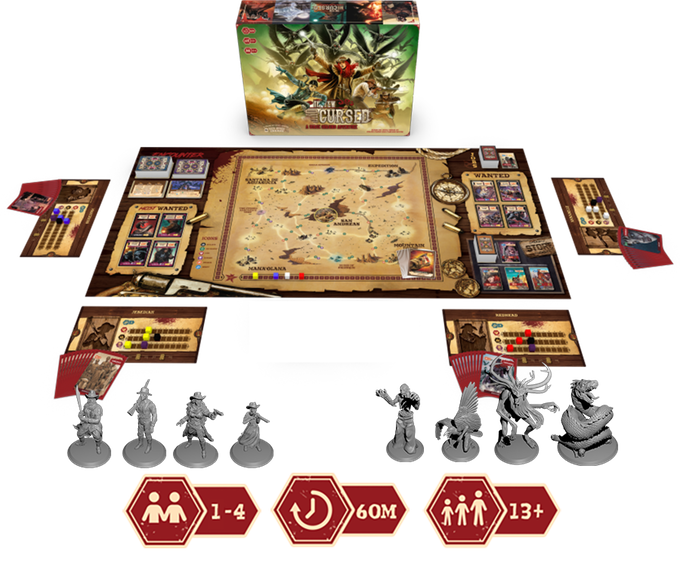 During the game, players will be earning a name for themselves in this brutal world by discovering magical artifacts, completing jobs, and bounty hunting. Each player will have a character called a “Curse Chaser” who comes with their unique starting decks, varying weapon proficiency, abilities, stats, and unique curse transformations. The deck-building part of the game is interesting as it doesn’t have a market. Instead, players draft cards from the upgrade deck to add to their own deck.

The Refuge: Terror from the Deep 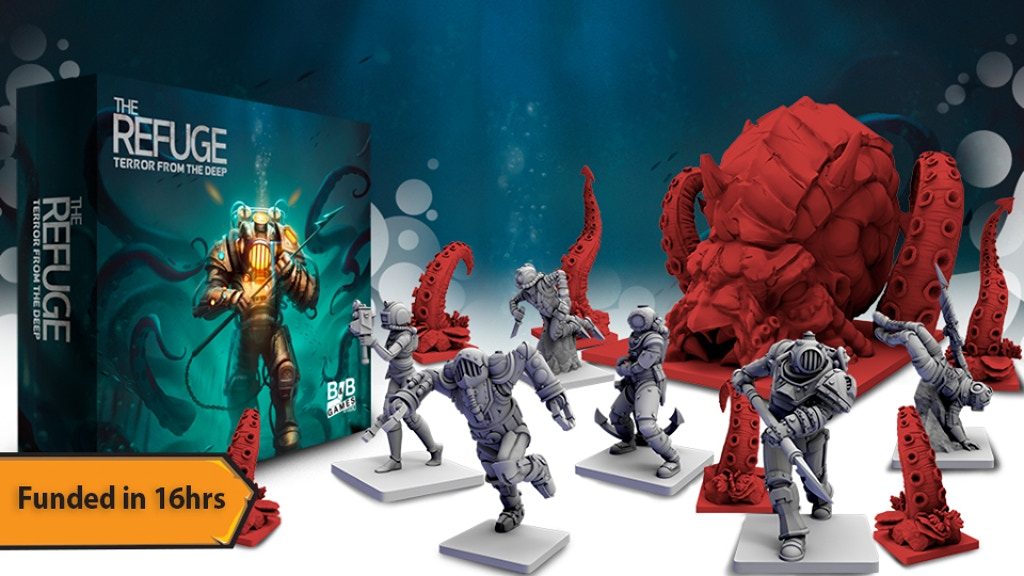 The Refuge: Terror is a competitive racing game, where the players are exploring the wreck of an abandoned German submarine when the unthinkable happens… a sudden kraken attack! You don’t have to outrun the kraken. You just have to outrun your friends. Be the first to the escape pod with your cargo to win. 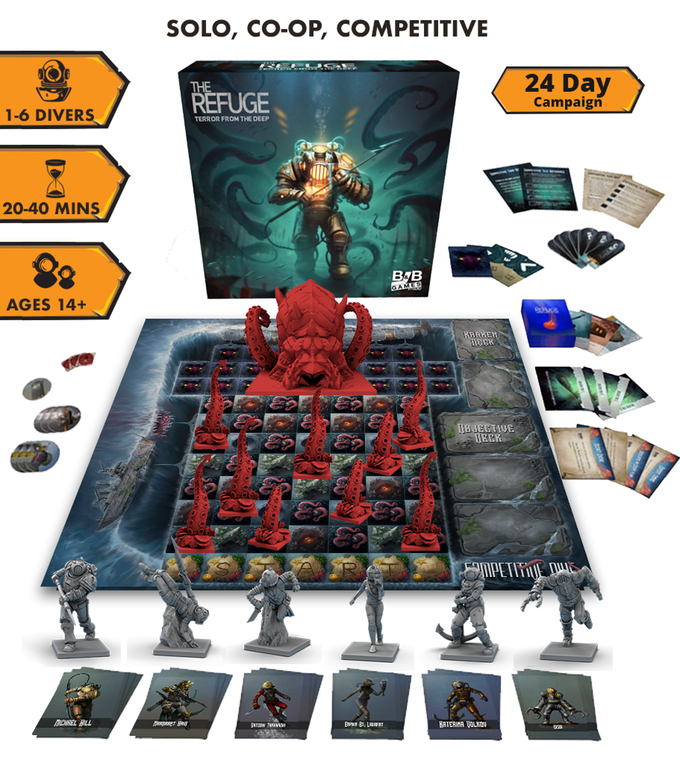 By cleverly using the cards in your hand and spaces on the board, you can use tentacles to slow your opponents down, grab valuable salvage, and move ever closer to escape. I like that the game also has solo and cooperative modes where you can try to accomplish goals while avoiding being devoured by the kraken and the minis are really cool looking. Learn more about The Refuge: Terror from the Deep on Kickstarter here. 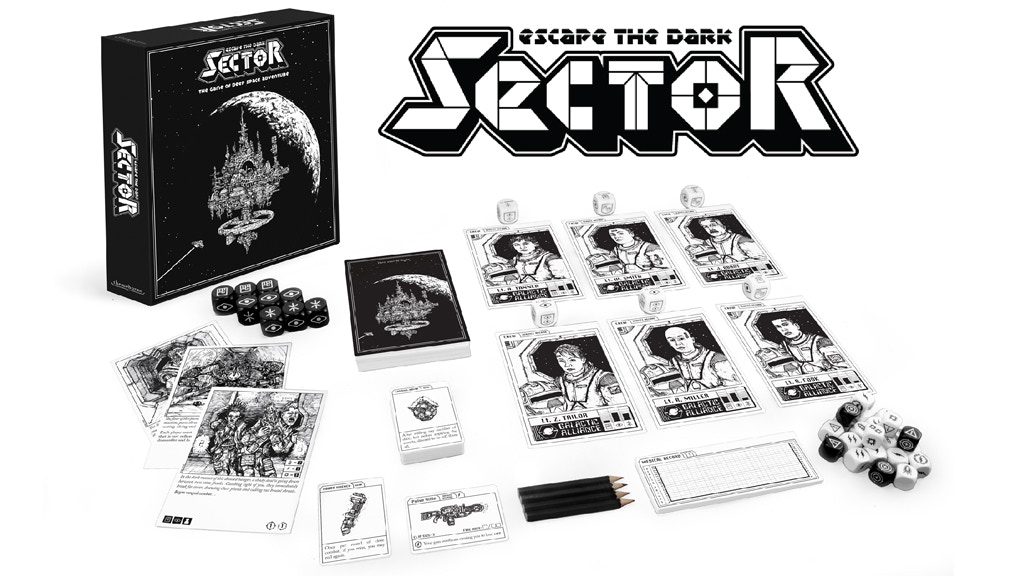 Want more escape-themed fun? Check out Escape the Dark Sector! This time the players are the crew of an impounded spaceship who have been imprisoned and must break out, find their ship, and make a run for it. Inspired by classic gamebooks, Escape the Dark Sector! tells its’ story through a deck of chapter cards. Each chapter card provides a situation the players must react to be it alien monstrosities to broken replicators. If you manage to complete all of the chapters and defeat the final boss, you win! 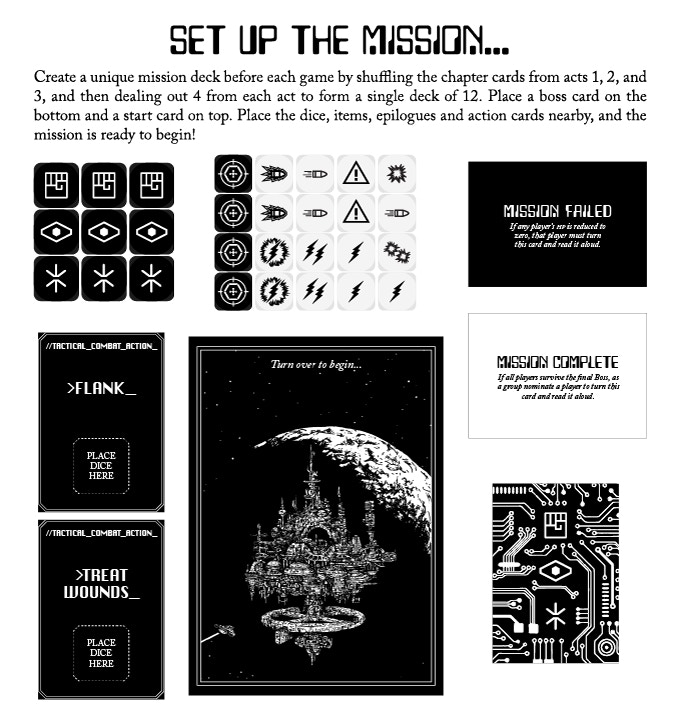 I kinda love the stark black and white art of Escape the Dark Sector!. Between the art and the gameplay, it reminds me a lot of the old Choose-Your-Own-Adventure books. If you’d like to know more about the game turn to the Kickstarter page here. 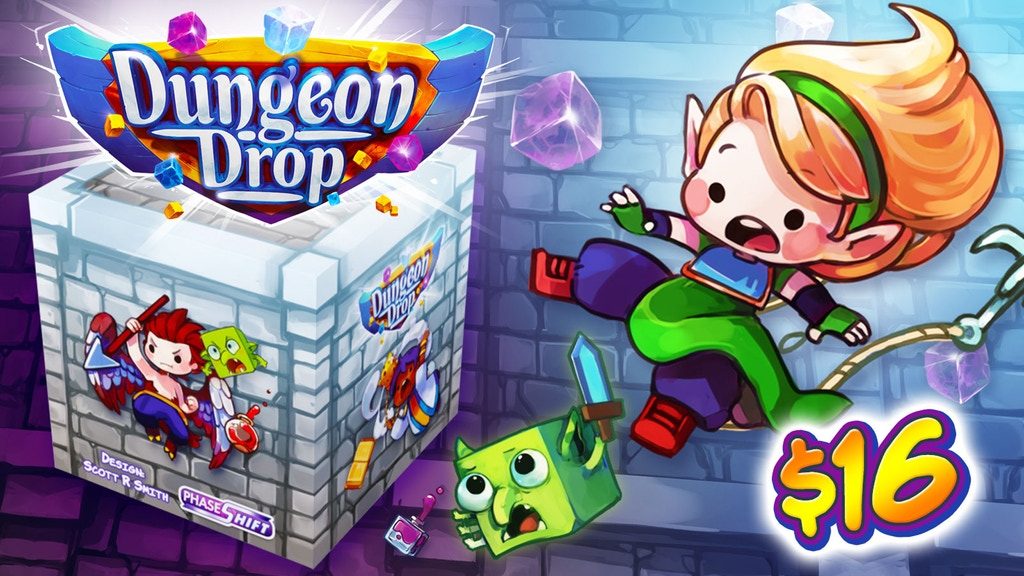 I am really intrigued by Dungeon Drop. Its a randomized dungeon crawler that creates room, encounters, and loot locations by dumping a horde of colored cubes onto the table. The walls of rooms are created by the spaces in-between grey cubes and the cubes inside that perimeter can be collected. The Goblins, Trolls, and Dragon cubes will cause you damage, so you have to be careful when deciding which pillars mark the room you are looting. The hero who earns the most treasure wins. 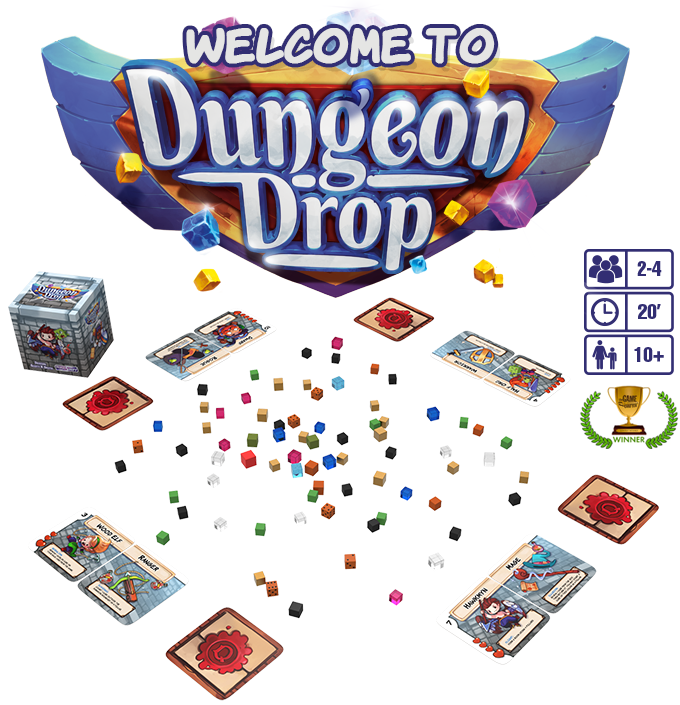 I am fascinated by the visual puzzle that Dungeon Drop creates and it looks like a blast to play. Drop on in to Dungeon Drop on Kickstarter here. 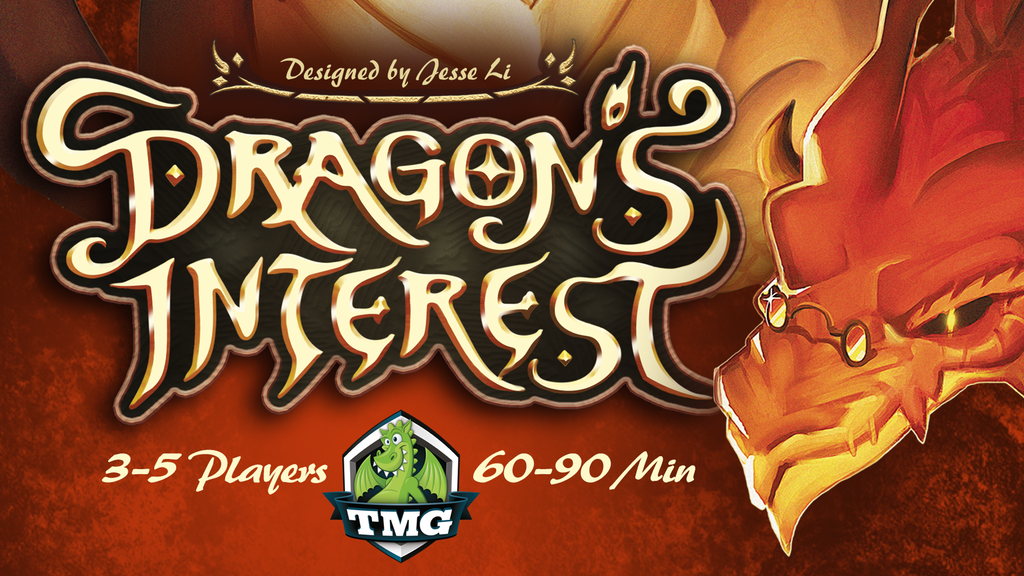 Borrowing from loan sharks is really not a great idea. So borrowing from loan dragons is a whole another magnitude of bad idea. In Dragon’s Interest, the players take on the role of leaders of broke kingdoms looking to rebuild their glory through out-bidding each other and collecting buildings to add to their kingdom.

You’ll need money to do so and the best place to borrow is the dragon’s horde. If you manage your kingdom well, you’ll have the dragon’s money when the comes calling. If you can’t pay the dragon will be rightly upset and the game will end. The other way the game can end is if 1 player manages to claim 10 buildings. Either way, whomsoever can pay the interest in the last round and has the most victory points wins! I absolutely love the theme on this one and Tasty Minstrel always does a fantastic job on their components so I can’t wait to see how Dragon’s Interest comes out. Learn more about the game on Kickstarter here.