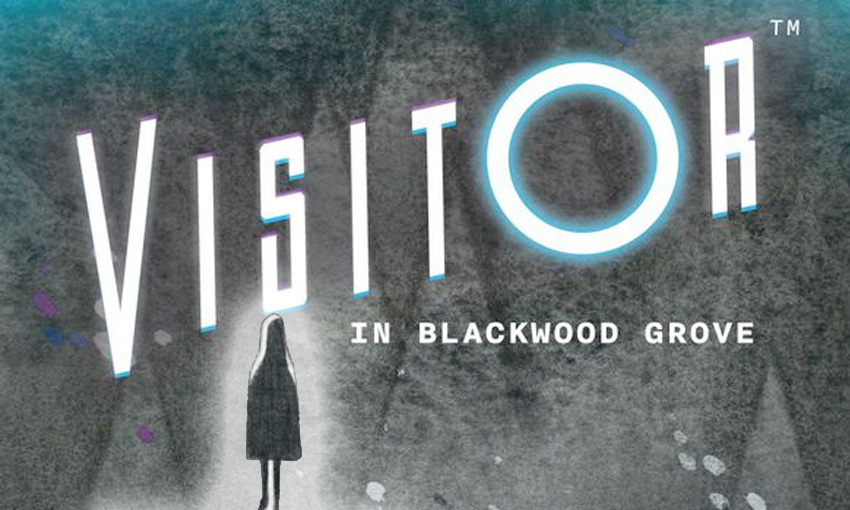 The Visitor in Blackwood Grove brings a unique sort of partnership challenge in its gameplay - the challenge of communicating just the right information without overcommunicating is a particularly unique trait that makes this game stand out.

Visitor in Blackwood Grove reads like a tale as old as my childhood (son of the 80’s that I am) – a kid from a small town sees a strange light streak across the night sky.  Hopping on her bike, she rides out to greet the alien visitor, only to arrive just barely ahead of a swarm of black SUVs, as a cadre of government operatives has taken a keen interest in the crash… 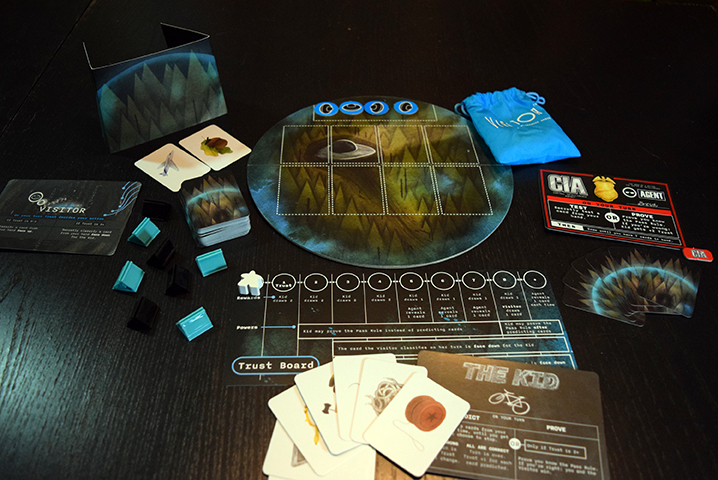 We were provided a review copy of Visitor in Blackwood Grove.  We weren’t otherwise compensated.

Visitor in Blackwood Grove is an asymmetrical deduction game where there are two teams – the Kid works with the Visitor, trying to establish trust between them so that the Kid can move through the Visitor’s forcefield.  Meanwhile, the Agents will try to figure out how to bypass the field before the Kid can, and thereby subject the visitor to whatever nefarious experiments they have in mind.  Because, you know, that’s what government agents do. 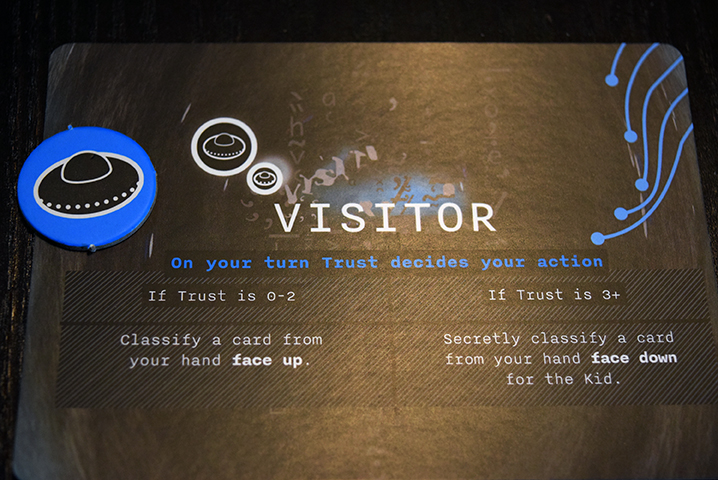 At the start of the game the Visitor flips over 2 object cards and looks at their hand. The they will secretly make up a “Pass Rule”. This rule dictates what kinds of objects will be able to pass through the forcefield. You want to make a rule that is easy enough for the kid to figure out, but hard enough that the agents won’t. 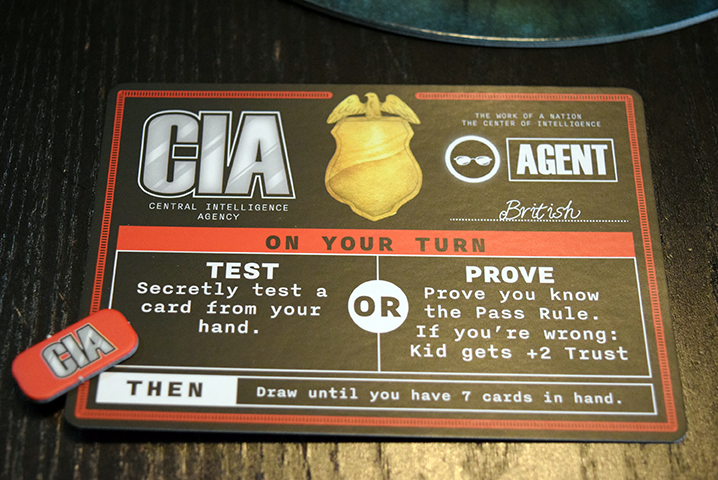 A good example could be “Things that include the color red” as this narrows down the possibilities, but still gives you plenty to work with. A bad example of this might be “Things Meeple will eat” as this could include pretty much everything in the deck (including the cards themselves). 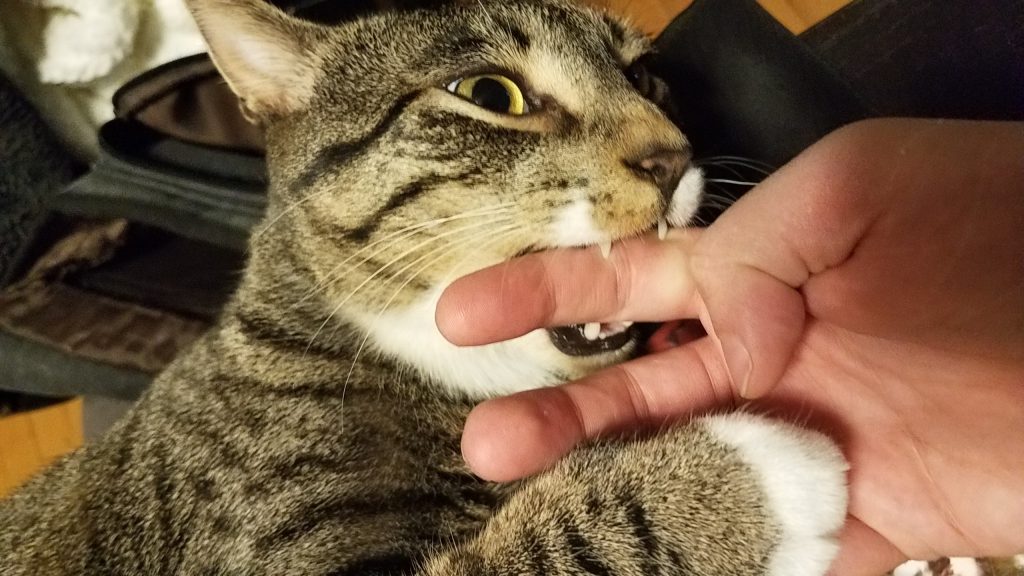 One the rule has been determined, the Agent will test an object from their hand by secretly showing it to the visitor. If the object makes it through the forcefield (which is to say, passes the rule), it is placed on the edge of the board with that Agent’s card marker on top. If the object bounces off, it’s placed face down on top of the Agent‘s role card. 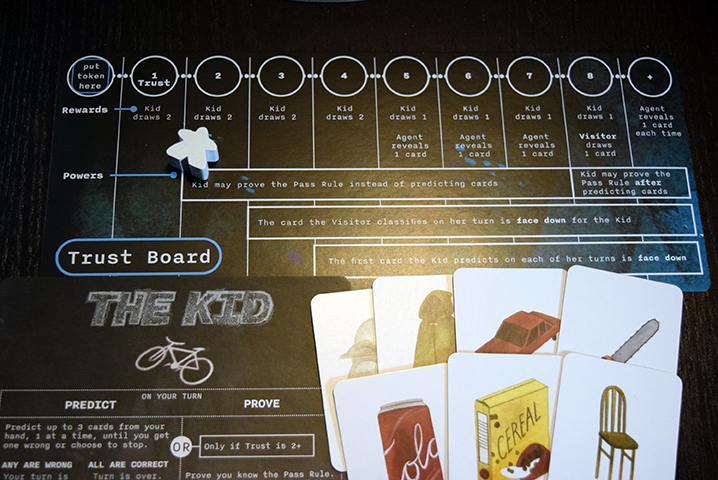 On their turn, the kid will “Predict” an object by showing it to the entire table and saying either “admitted” or “repelled”.  If the kid’s prediction is correct the object placed face up and the kid can predict again or end their turn and gain +1 Trust for each prediction (max of 3). 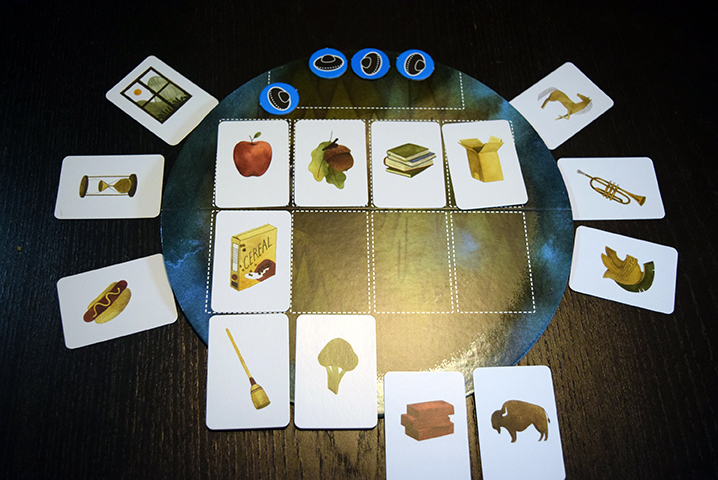 If the kid manages to get 2 trust, they may guess what the pass rule is. With a correct guess the kid wins, otherwise their turn ends. The Agents may also guess the pass rule on their turn. Similar to the kid, if they guess correct they win, but if they are wrong, not only is their turn over, but the kid also gains 2 trust points. 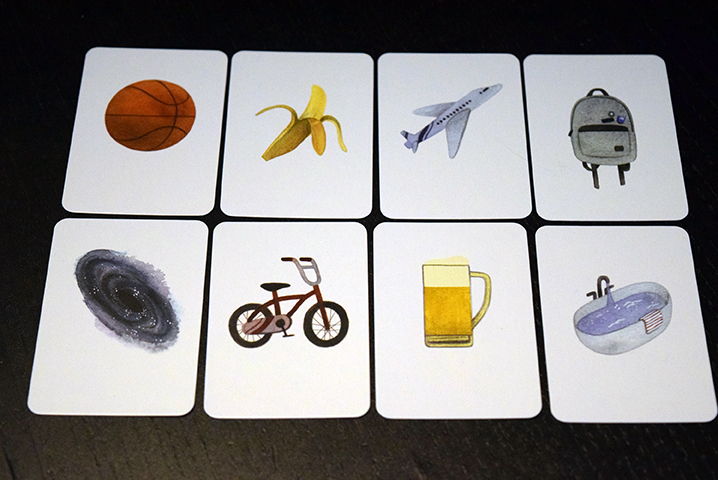 Andrew: This is what makes Visitor in Blackwood Grove unique and potentially really engaging – the puzzle that all parties are racing to solve is a combination of deduction and intuition.  The Visitor’s job of selecting the rule is critical, because it sets the tone for the entire rest of the game, and it will essentially set the difficulty of the Kid’s task.  On the other hand, the Agents play a tense game of walking the line between guessing too soon (and giving the Kid free trust if they are wrong), and not giving the Kid the room needed for her to guess the rule.

Jess: Yeah!  Wait, what do you mean potentially engaging?

Andrew: Well, to be honest?  I’m just bad at it!  It’s not the game’s fault at all, I just kinda suck at deduction games in general.  So whether I’m the Kid or one of the Agents, I’m sorta guaranteed to have at least a struggle, if not a bad time.

Jess: Heh, yeah, you’re not great at these games, no.  But that’s something I really like about Visitor in Blackwood Grove!  The Visitor is on the Kid’s team, but isn’t actually trying to deduce the rule (they set it, after all).  Instead, they are being strategic about what information they show on their turn, either to the table at large, or only to the Kid (once at 3+ trust).

Andrew: So even for someone like me, who is kinda abysmal at deduction games, there’s something for me to do here!  And that’s awesome!

Overall, we appreciated Visitor in Blackwood Grove’s unique take on the deduction-style of game design.  The team dynamic works really well, and both sides will be grinding their teeth every time the other makes a guess at the pass rule.  And for people who may not consider themselves particularly good at deduction, then there is at least one role that they can play which is more about smart communication than deduction.  It’s pretty unique, and worth checking out!