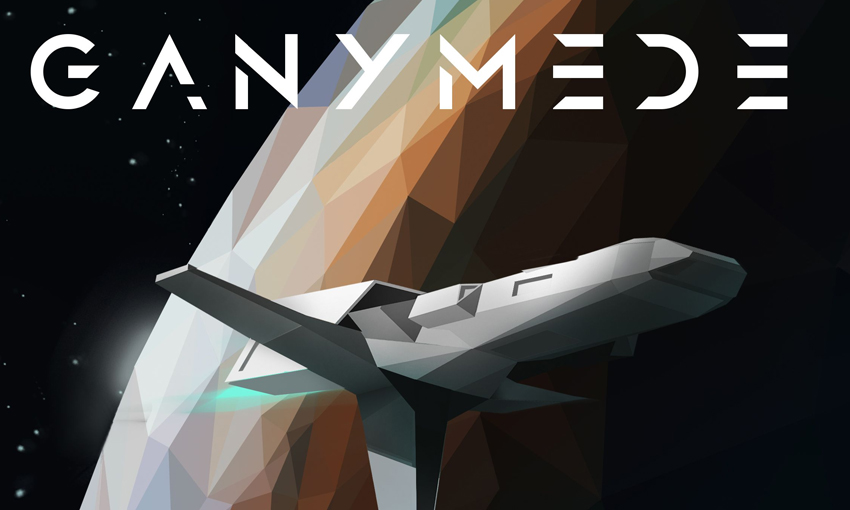 Ganymede is a gorgeous, well-designed set collection/tableau building game that features exciting moments when you get a cascade of bonuses...and relatively unchanging gameplay from session to session.

Some games sit gorgeously on the table, and there is something about the artwork in Ganymede that immediately caught my attention.  In a hobby full of space games, it can take a lot to stand out from the endless star fields and generic space ships.  Of course, looks can only take you so far, and as we dove into Ganymede, I found myself wondering if there would be gameplay that was engaging enough to keep up with the game’s aesthetic. 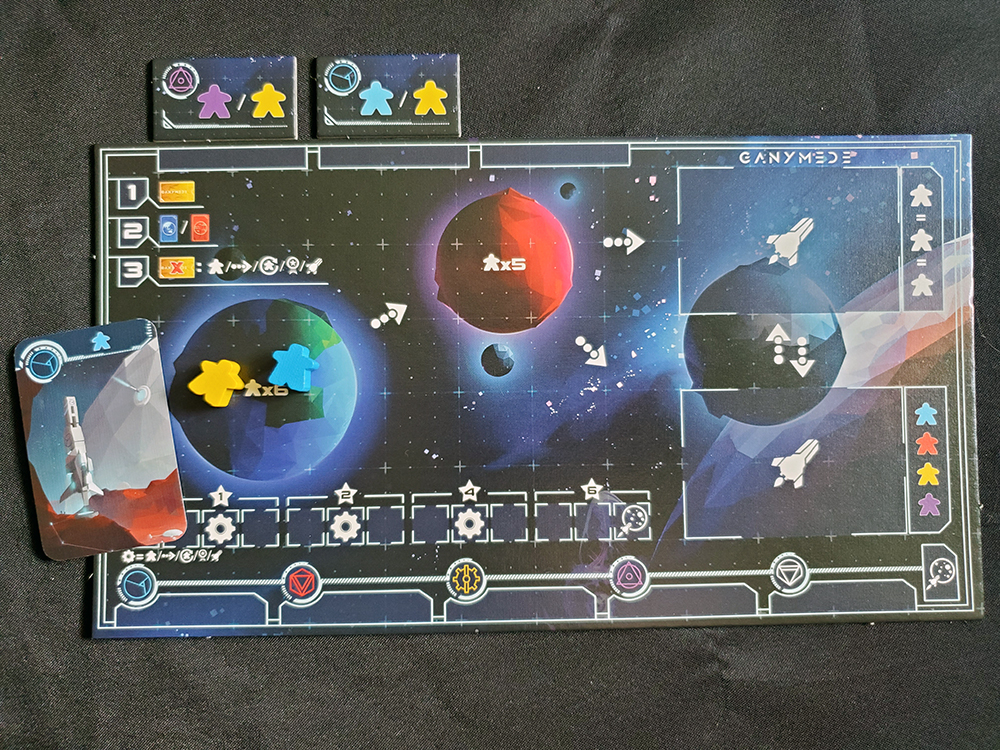 We were provided a review copy of Ganymede.  We weren’t otherwise compensated.

In Ganymede, players are competing to see who can most successfully colonize the universe, and they will do so by recruiting colonists from Earth, move them to Mars via shuttle, and then to Ganymede where they will depart for distant worlds. 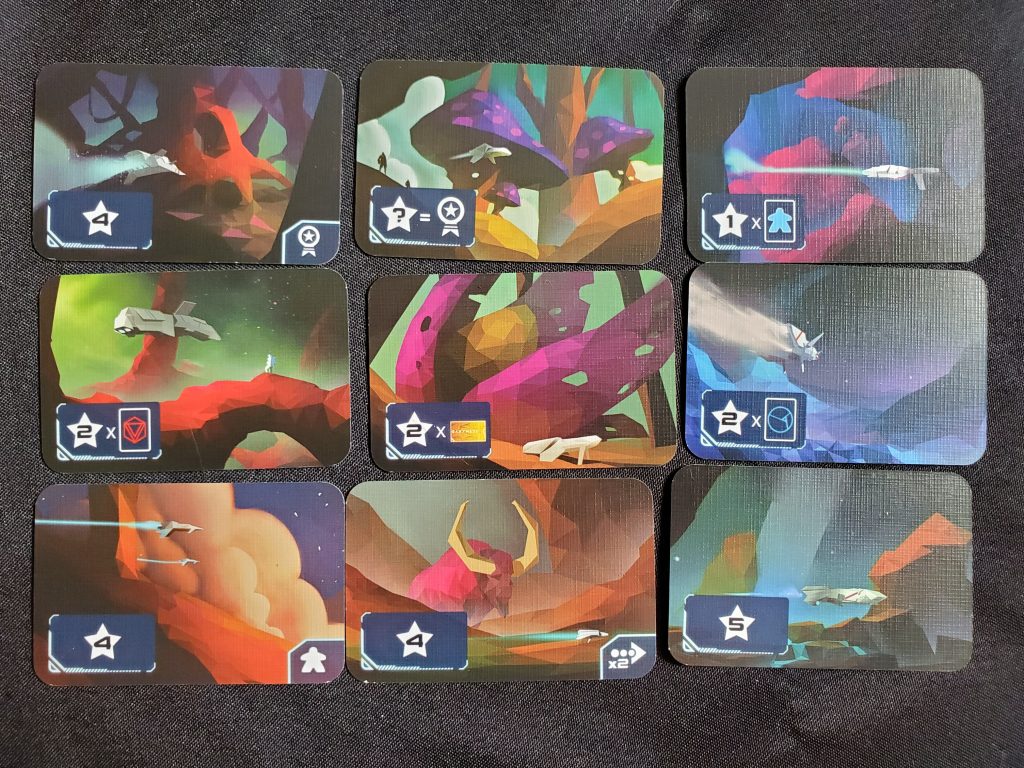 In gameplay terms, Ganymede is a set collection/tableau building game.  Each player gets a player board which will organize their gameplay, and help them visualize the process of moving settlers.  On a player’s turn, they will take 1 of 3 possible actions: 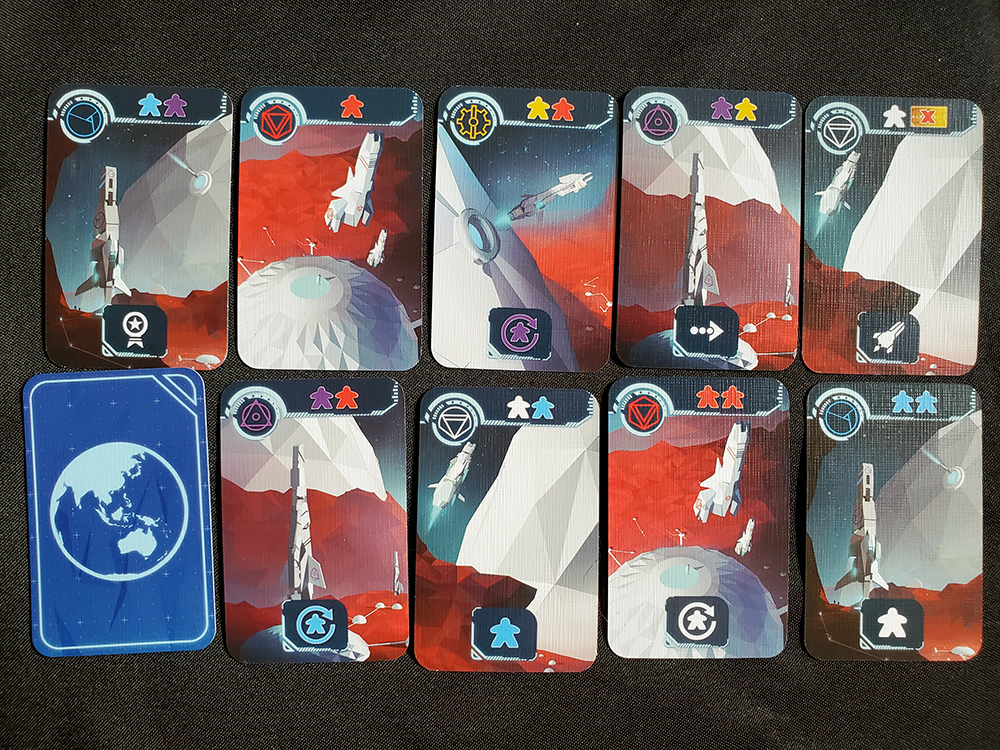 When a Settler ship is filled, its effects (if any) are triggered, and then that ship is added to a player’s score pile.  The game ends when either a player has launched their 4th Settler Ship, or when one of the Shuttle piles runs out. 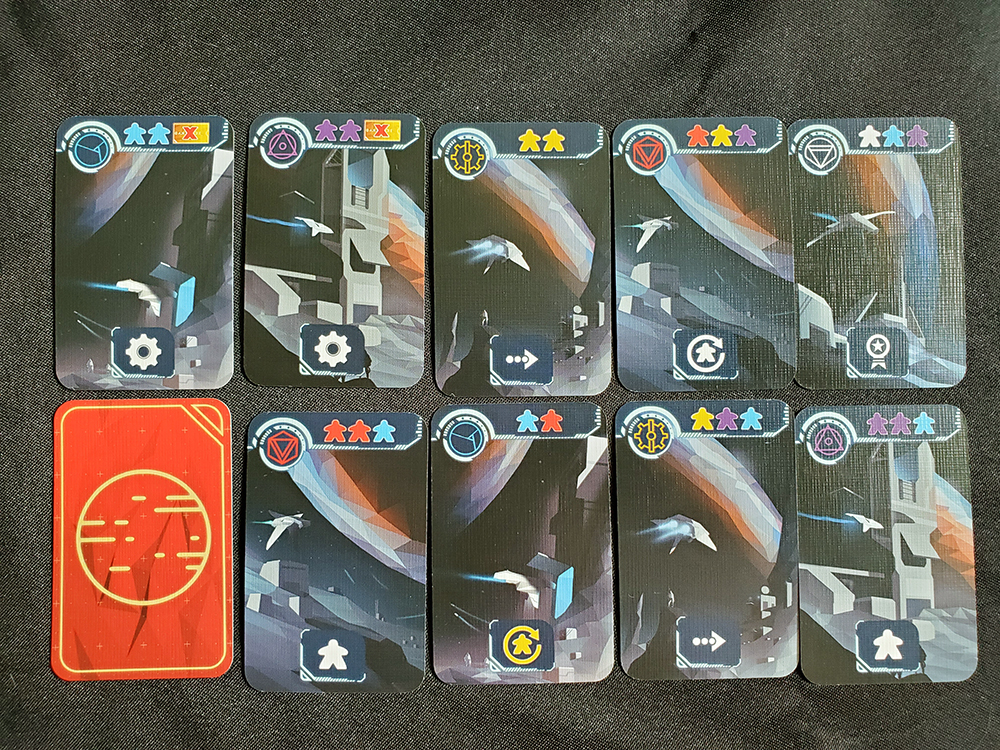 Now, the reality is that Ganymede is a fairly straightforward game.  It’s all about gathering the right sets of Settlers and shuttling them between the different locations so that you can score.  But what makes Ganymede really fun is how things combo off each other.  Every card or tile added is potentially a piece of the engine – every time you add an element, you might trigger bonus actions or multiply that element’s effects.  Use one of each color shuttle?  Bonus action!  Add a third red Settler tile?  Take that tile’s action 3 times!  Even your Reputation track gives bonus actions. 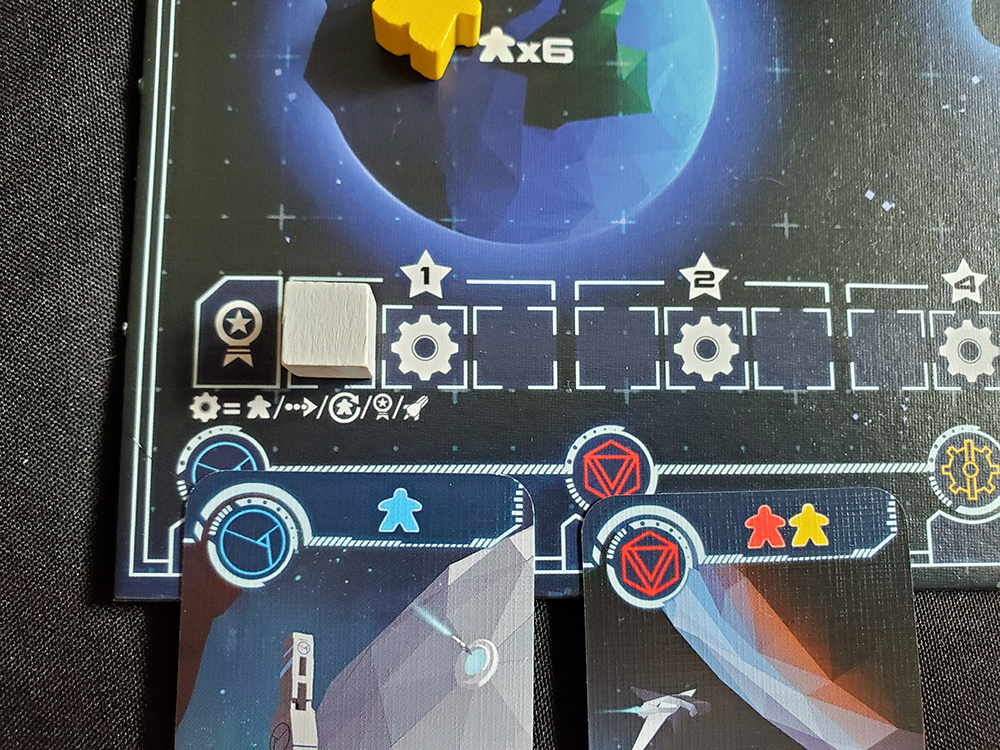 Finding clever ways of chaining actions together was definitely my favorite part of Ganymede, and unfortunately, it also highlighted my biggest issue with the game – it ends too fast.  4 shuttles is nothing, and there is little that prevents a player who knows they’re ahead from rushing hard to end the game before their competitors can catch up.  That means that for a game which seems to be focused on building a clever combo engine, you rarely feel like your engine gets up to speed before the game is over. 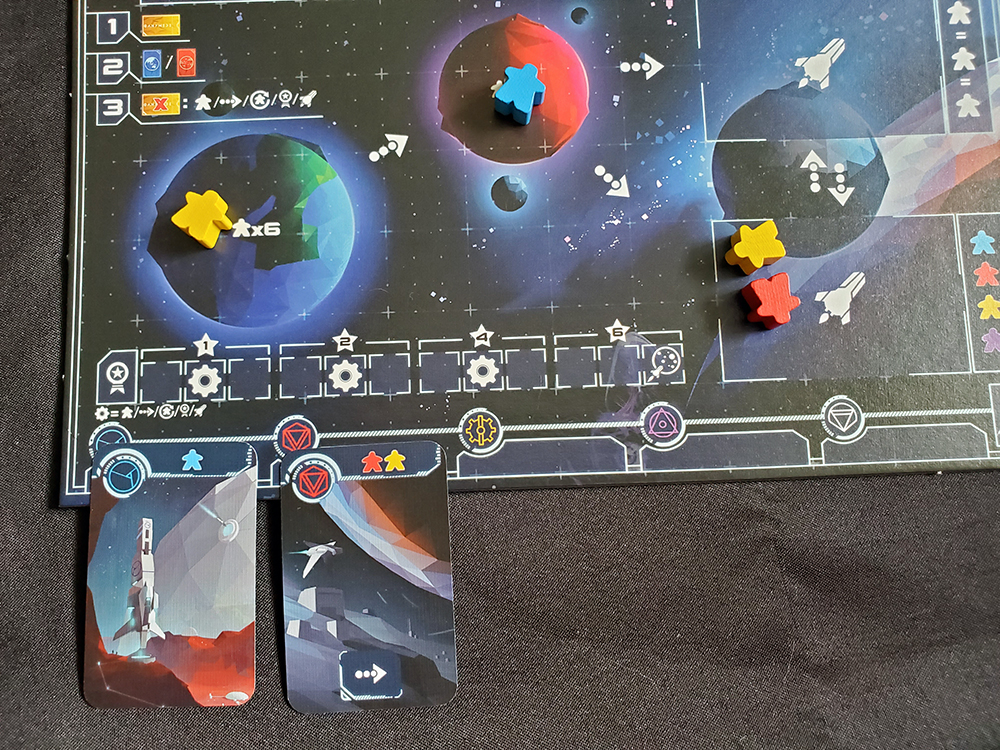 But there is also plenty to recommend in Ganymede.  The puzzle it presents is a fun one, and it really does feel satisfying when one action triggers a cascade of bonuses that mean you get to do so much more with your turn than the one action you have coming to you.  The aesthetic, which initially drew me to the game, is definitely strong throughout, though the meeples feel oddly generic against the beautiful stylized artwork. 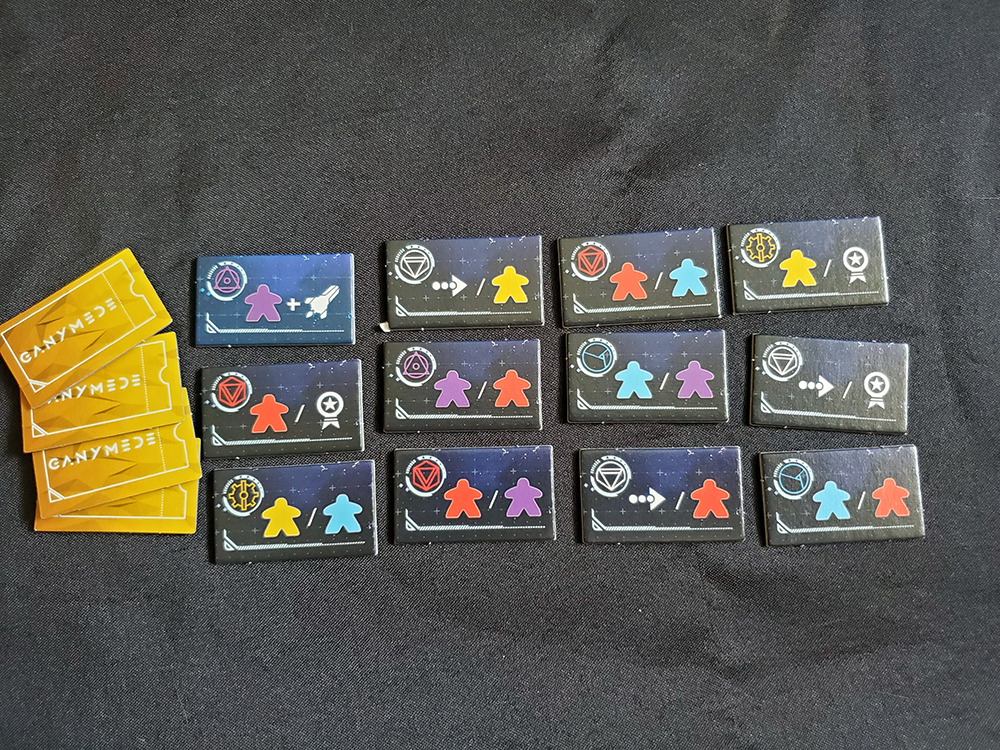 On the whole, I found Ganymede to be the most fun at the 2 player mark, when I could be more strategic about gameplay, and while there was nothing wrong with the 4 player experience, more players didn’t really add anything either, aside from more competition over the tiles and shuttles you might want. 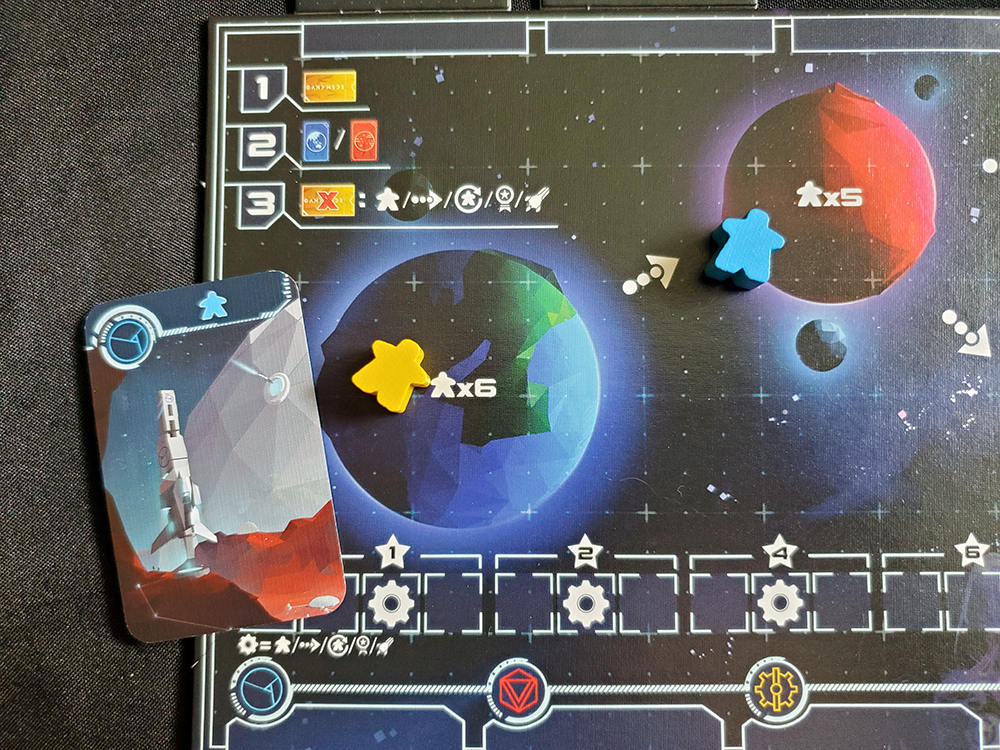 So where does that leave me with Ganymede?  Well, I’m honestly a little torn.  I’ve really enjoyed the plays I’ve had of it – in particular, that moment when you get to trigger a combo that results in some bonus actions and a pile of points is a really nice adrenal hit.  On the other hand, Ganymede can feel like it lacks variety in its gameplay (despite those combos), and while I’ve had fun with it every time I’ve pulled it off the shelf, I’m not sure how frequently that will be, now that this review is written.

But that said, and recognizing that this criticism comes down very much to personal taste, I definitely recommend Ganymede for people who are a) drawn in by its art, as I certainly was, and/or b) feel they can appreciate it for exactly what it is, which, in all fairness, I certainly did.