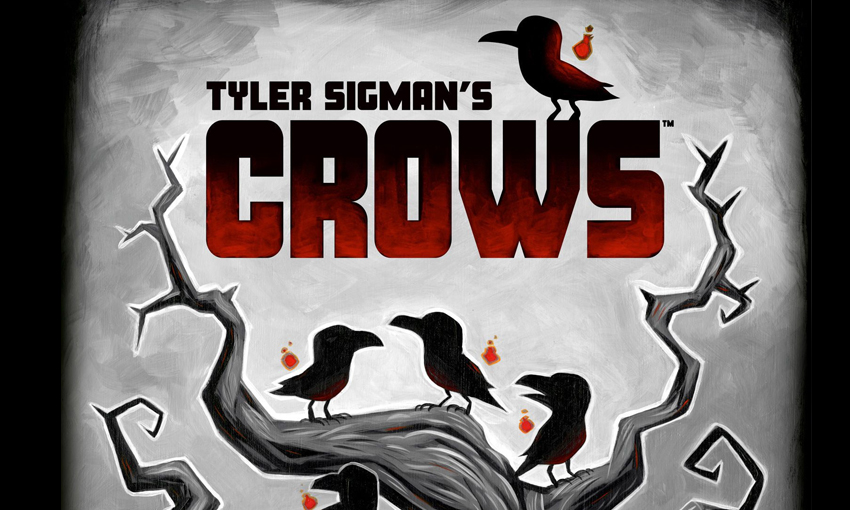 Aesthetically, if my teenage self was concentrated into board game form, I think we’d get something very close to Tyler Sigman’s Crows.  Adorned with moody art and utterly bereft of color beside black, grey, and sanguine red, Tyler Sigman’s Crows is visually quite striking, for a certain definition of the word, and the variety of crow meeples only emphasizes the morose, eerie soul of the game.

Jess: The touch of whimsy in the character artwork works surprisingly well with the macabre aesthetic, and when you pair it with the tile-laying mechanics, you get something sorta like a  ‘Gothy Carcassonne’. 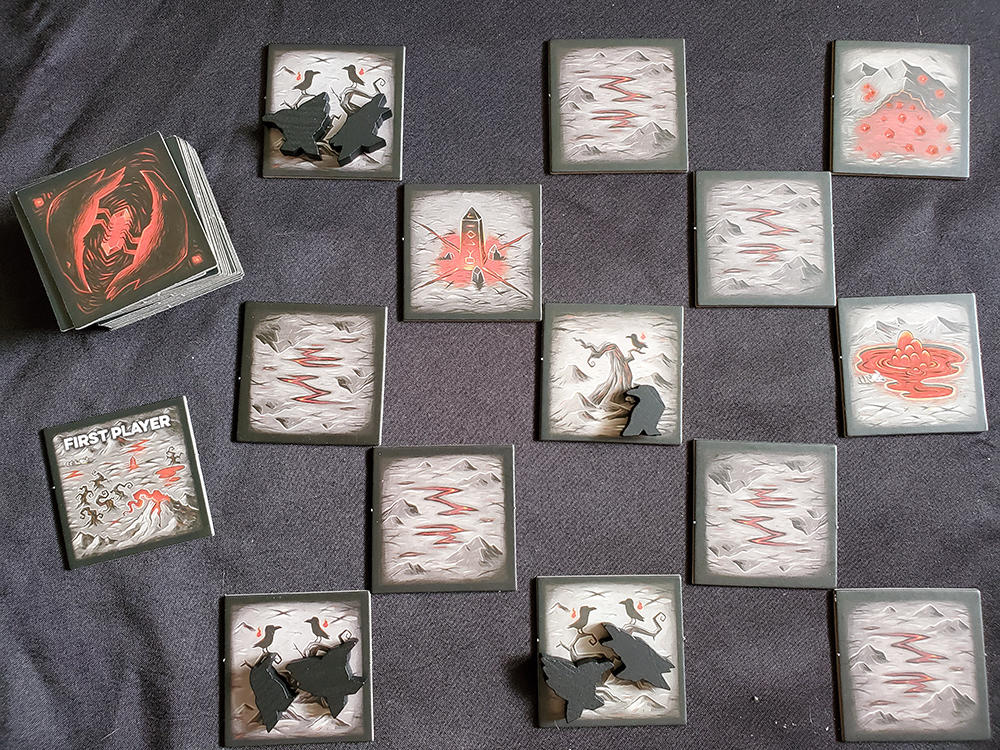 We were given a review copy of Tyler Sigman’s Crows.  We weren’t otherwise compensated.

Tyler Sigman’s Crows (so named because it is an expanded re-implementation of an older game simply called Crows) is a tile-laying game where players will compete to see who can gather the most Mana Stones – the crows of the Obsidian wastes are potent sources of power, and the Outcast Mage who manages to attract the most will be the best suited to survive the coming of the dreaded Nightfall… 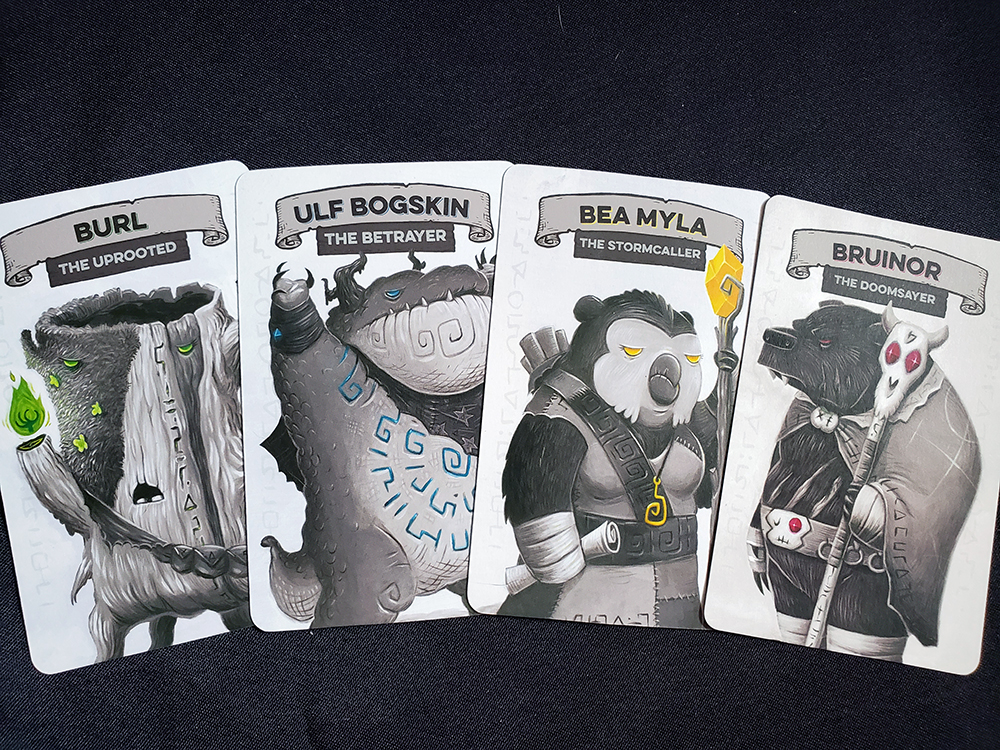 Andrew: Or something – look, the theme’s pretty darn pasted on.  But it’s a good paste job, at least. 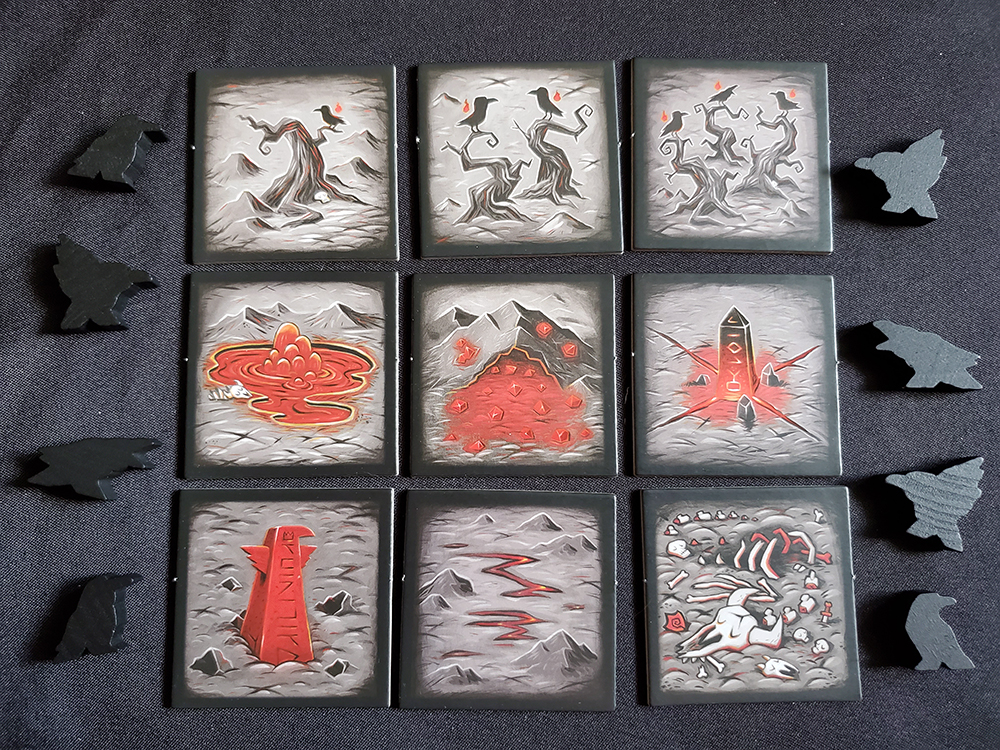 With every turn, players will add tiles to the landscape, looking to draw magic-rich crows to their Mana Totems, and occasionally dropping spells to manipulate the board and mess with their opponents.  After adding a tile, the active player will move their Mana Totem to an unoccupied tile and can optionally cast a spell. 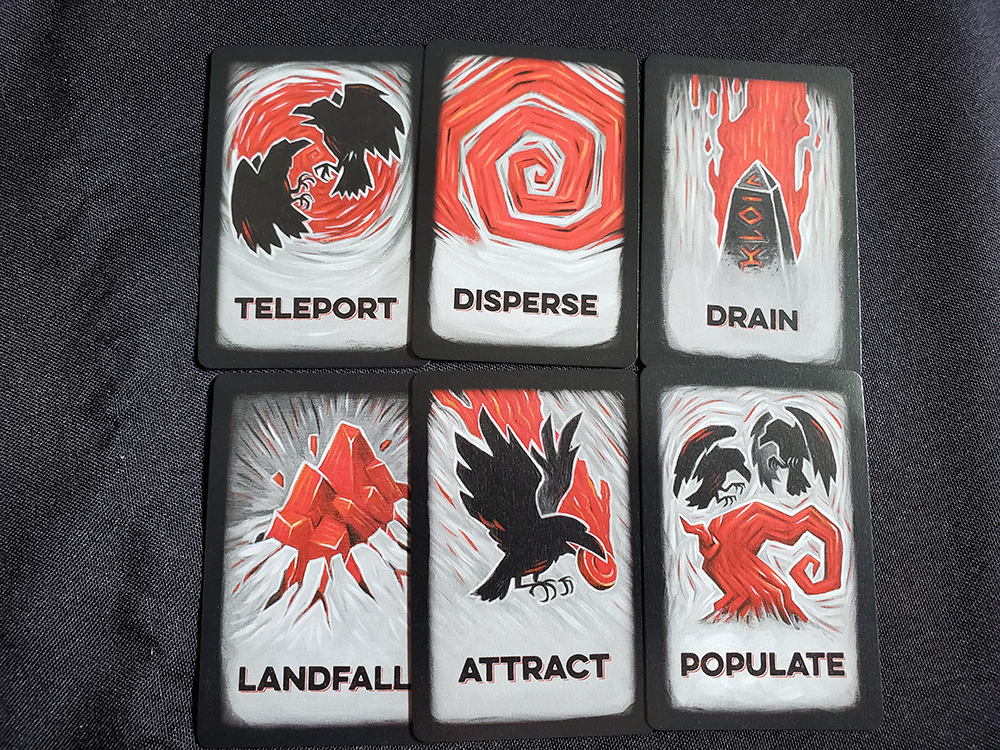 Different tiles will trigger different effects, like crow tiles that add the titular avians to the board, lava pools that interrupt crow movement patterns, and ley nexus tiles, which double the value of crows which flock there.

Once all players have added a tile, moved their totem, and had the chance to spell-sling, the crows will flock to the nearest Mana Totem, moving in straight lines to do so.  Players will score Mana for each crow that lands on their Totem, and should 6 or more crows congregate on the same tile, a Murder is formed, and the crows will spiral across the land, redistributing themselves to be gathered once more. 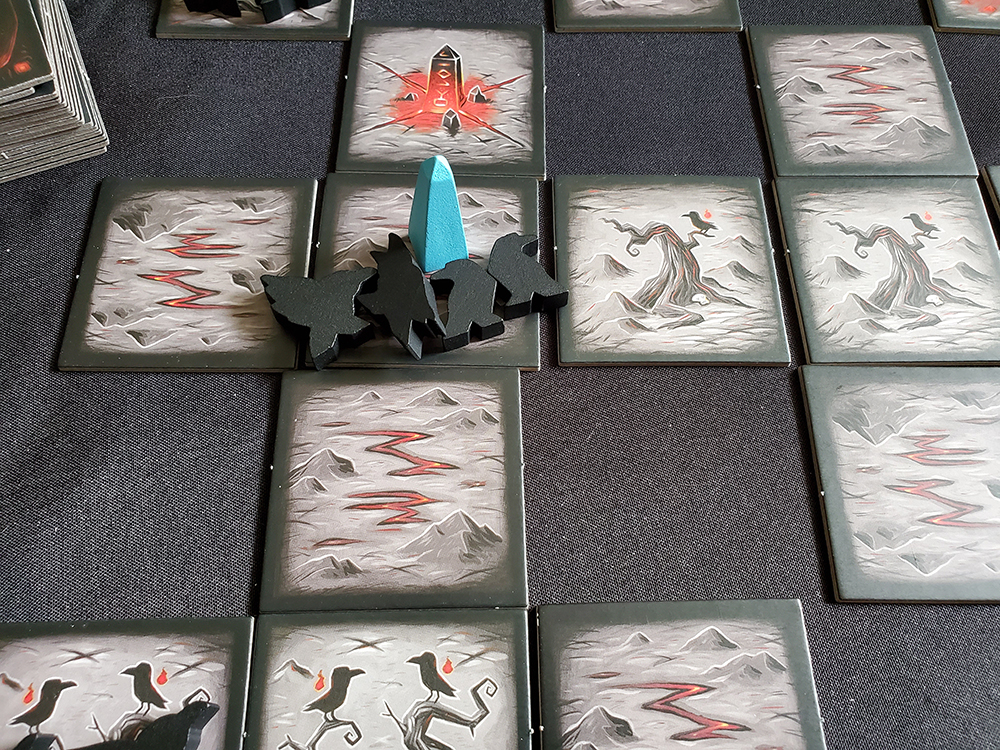 Jess: So even though it might look like you’re laying tiles and all that, it really pays to realize that Tyler Sigman’s Crows is really a puzzle – you’re looking to drop tiles and move your Totem in such a way as to gather the most crows you possibly can!

Andrew: And that puzzle can sometimes turn mean – messing with each other using spells, strategic tile placement, and just plain giving the crows a closer Totem to gather to means that Tyler Sigman’s Crows can occasionally be a nasty little game.

Jess: But with such a dark aesthetic, were you expecting anything less? 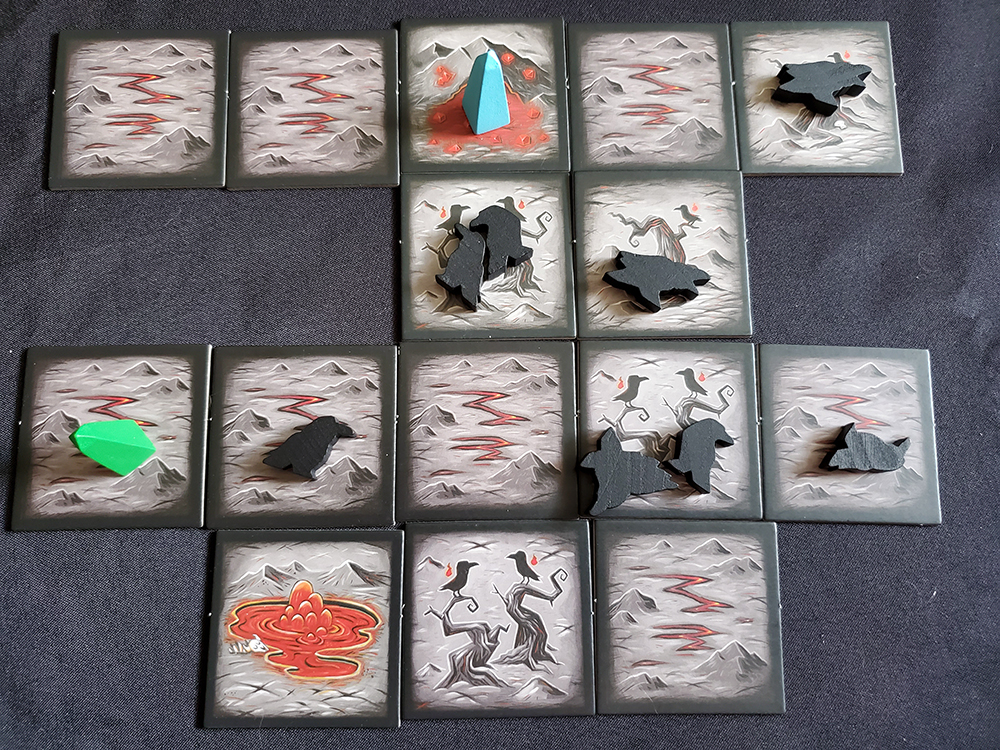 Tyler Sigman’s Crows ends when the Nightfall tile is drawn.  At that point, the player who has harvested the most Mana, which is to say been the most successful at overcoming the turn-by-turn puzzle of Tyler Sigman’s Crows’ mechanics, is the winner!

Andrew: So, bottom line here is that I had a good time with Tyler Sigman’s Crows.  I like tile-laying games in general, and while I know I’ve yammered a bit comedically about the aesthetic, I really do like how the game sits on the table.

Jess: Me too, on both counts.  I think Tyler Sigman’s Crows looks really cool, and I love it when you manage to pull off a big turn and get just a huge pile of crows as a reward for your clever placements. 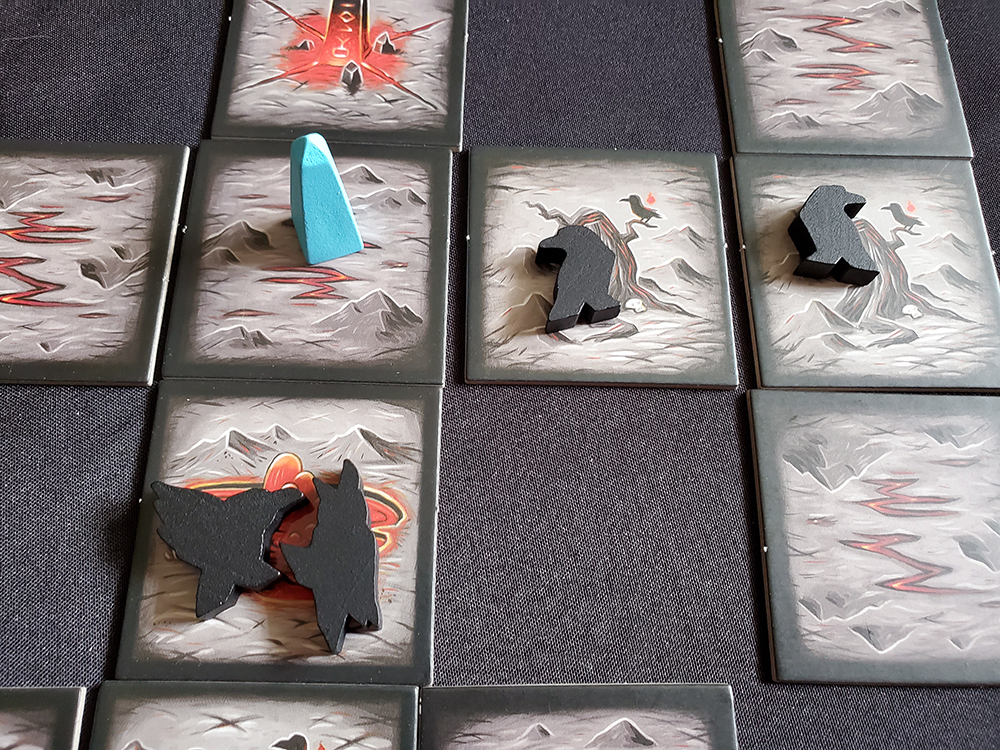 With more players, the landscape of Tyler Sigman’s Crows becomes even more treacherous, as you’ll have more outcast mages looking to mess with you and therefor less control overall.  We found it most satisfying at 2, but that’s only because that’s the number of players where scores are highest and you have the most control over your destiny, however dark and ill-fated it may be. 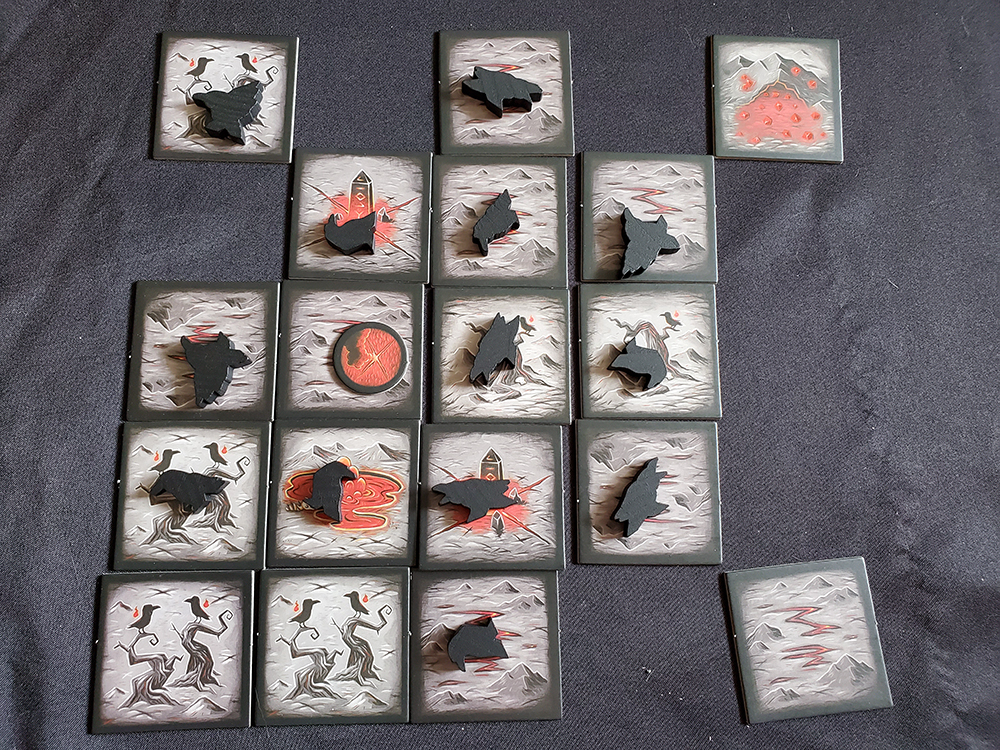 Tyler Sigman’s Crows isn’t a complex game, but it provides enough of a turn-by-turn puzzle that we found it engaging without being overly thinky.  Solid at 2 and no worse at more, this one makes for a decent date-night game…as long as you and your partner are into both the color scheme and its sometimes-toothy gameplay.  For tile-laying enthusiasts who might find its gothy theme to their liking, we totally recommend checking out Tyler Sigman’s Crows!

Recommendations based on Tyler Sigman’s Crows… 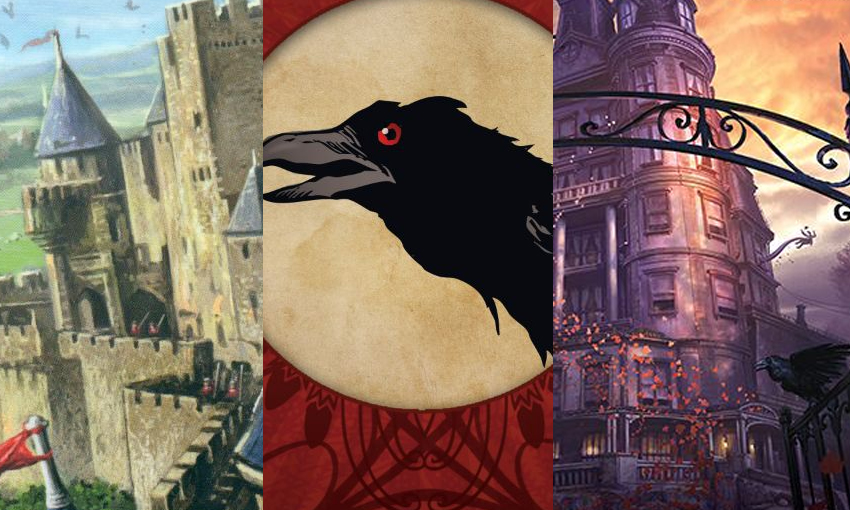