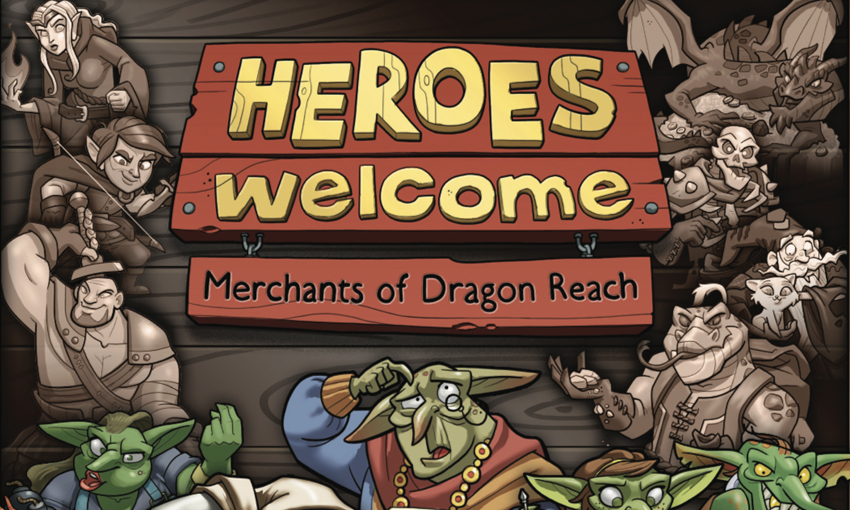 Heroes Welcome is a fantastically-presented economic puzzle that truly celebrates the unsung heroes of every great fantasy epics - the shopkeepers who sell the heroes all that awesome stuff.

Heroes come and heroes go (often by way of a dragon’s gullet), but in Heroes Welcome, profit is forever.  The enterprising (and cutthroat) merchants of Dragon Reach have set up shop just outside a dungeon where heroes will inevitably delve.  And who better to supply them for the trip, and to relieve them of their gains, than you? 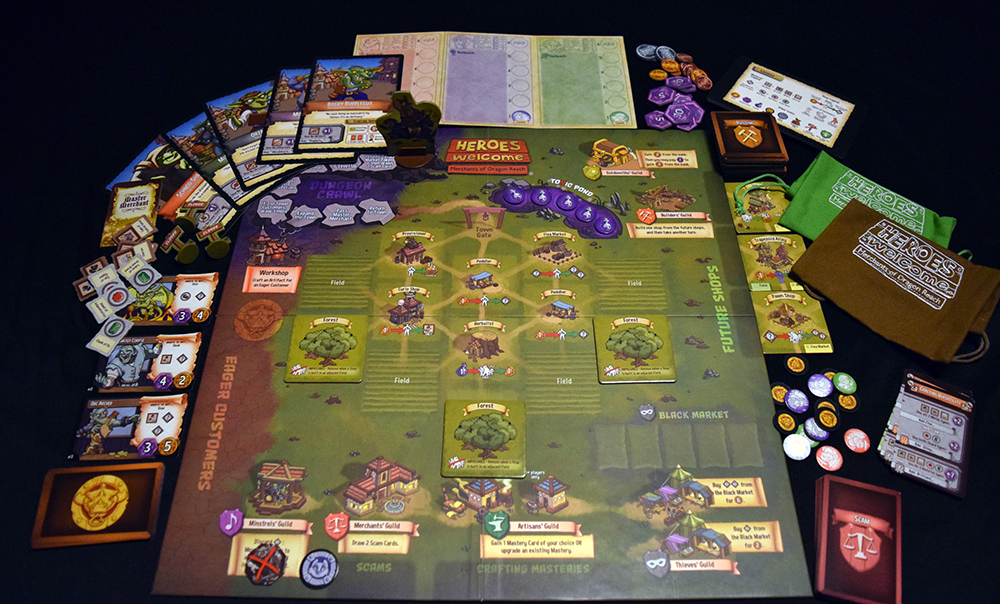 We received a review copy of Heroes Welcome.  We weren’t otherwise compensated.

Andrew: Heroes Welcome really celebrates the oft-unsung heroes of all fantasy adventures – the people who sell the heroes stuff! 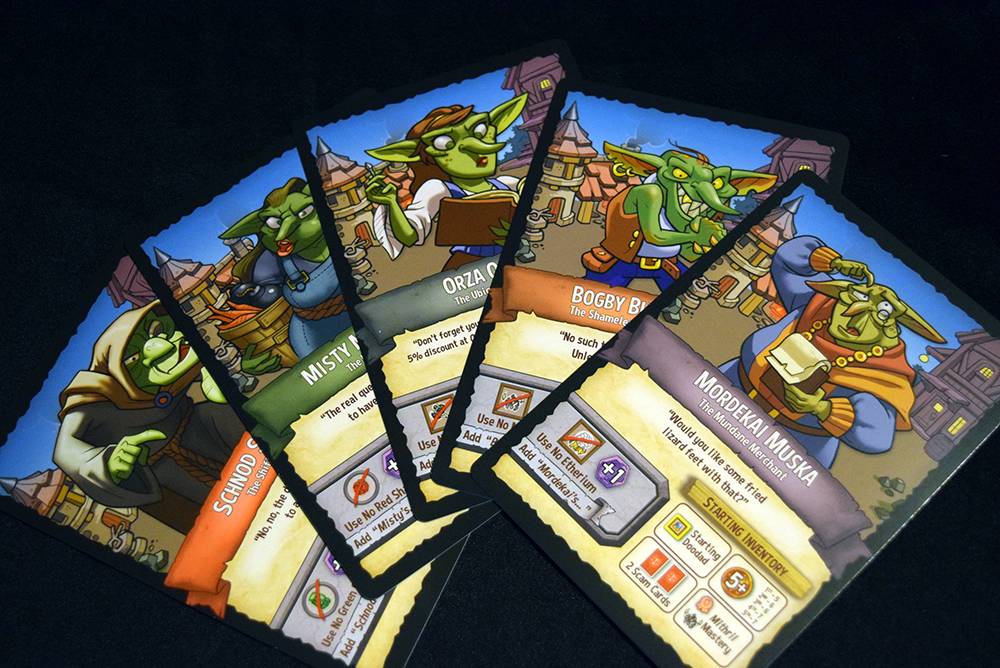 In Heroes Welcome, each player will work to maximize their profits, both in gold and in vorpal pieces (VP for short, the currency of the goblin homeland), and will do so by catering to the needs of both the waves of heroes who come through to clear out the local dungeon…and the monsters looking to defeat them.

Each round begins with the heroes coming through town, stopping at various establishments to buy supplies.  In turns, players can run shops for the heroes, visit the guilds to take special actions (such as adding new shops to town or increasing their specialization in the different building materials used in crafting artifacts. 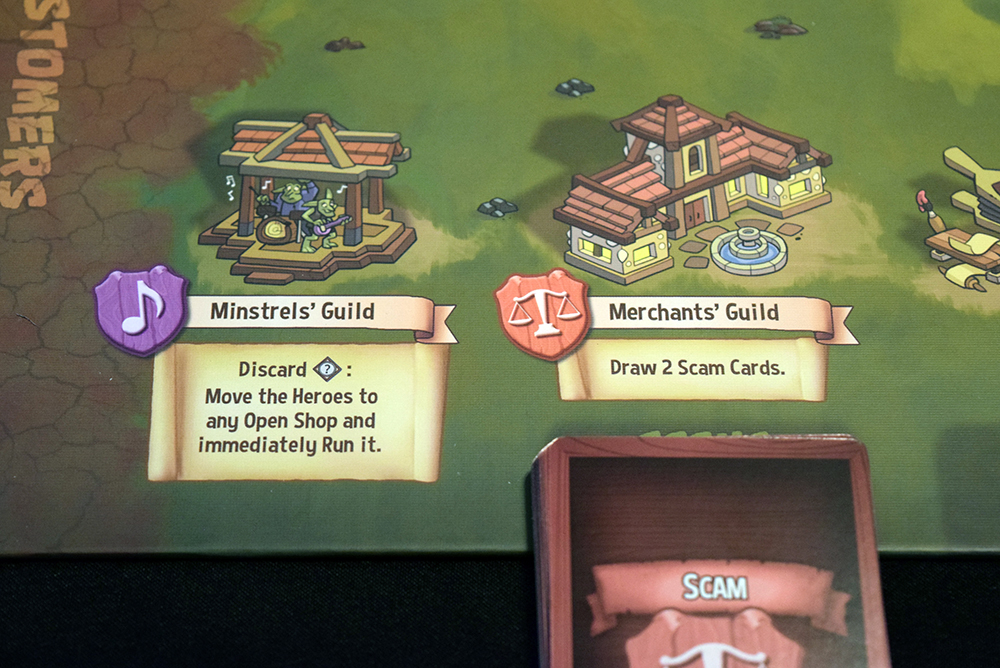 During this phase, each player also has the chance to interact with the heroes by moving their party around town to the different shops.  Each adventurer has their own inventory, and items get bought and sold from there, meaning that as players run shops for adventurers, the opportunity to make money off them (or acquire treasure, etc.) changes over the course of the round, creating a clever internal economy. 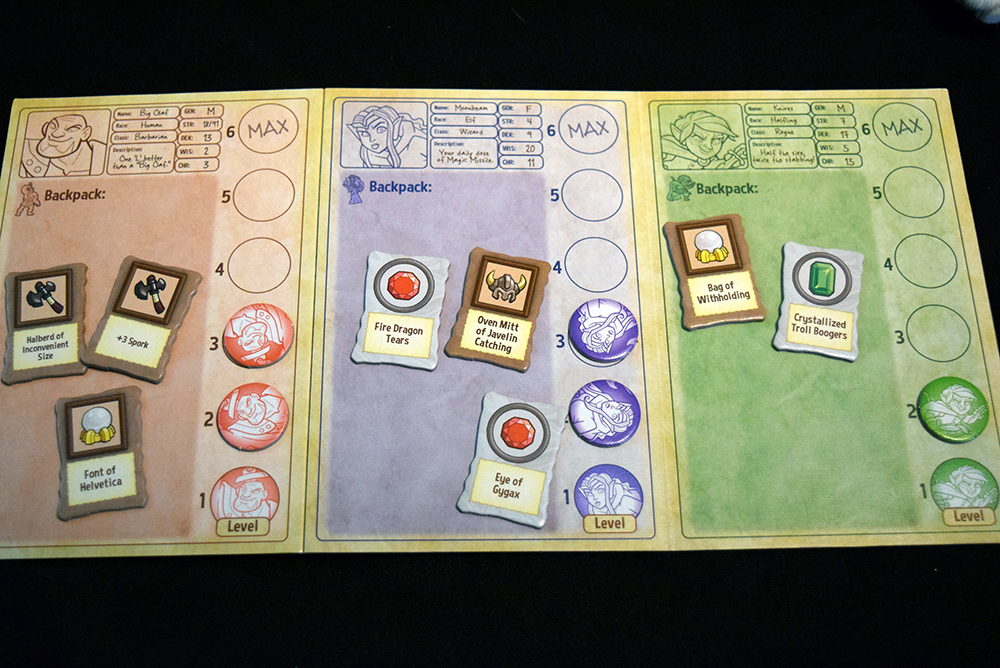 Players can also spend resources to build artifacts for the monsters from the nearby dungeon (aka Eager Customers).  Completing these orders can be a major source of Vorpal Pieces, especially once players being to take advantage of the specialties which they can develop over the course of the game.

Andrew: Interestingly, the round ends when one player can’t or won’t take more actions, and if anyone wants to keep taking actions past that, then they actually have to pay off the player who ended the round.  That creates a really cool little moment of tension, especially since the player who ends the round even gets a little bonus for doing so. 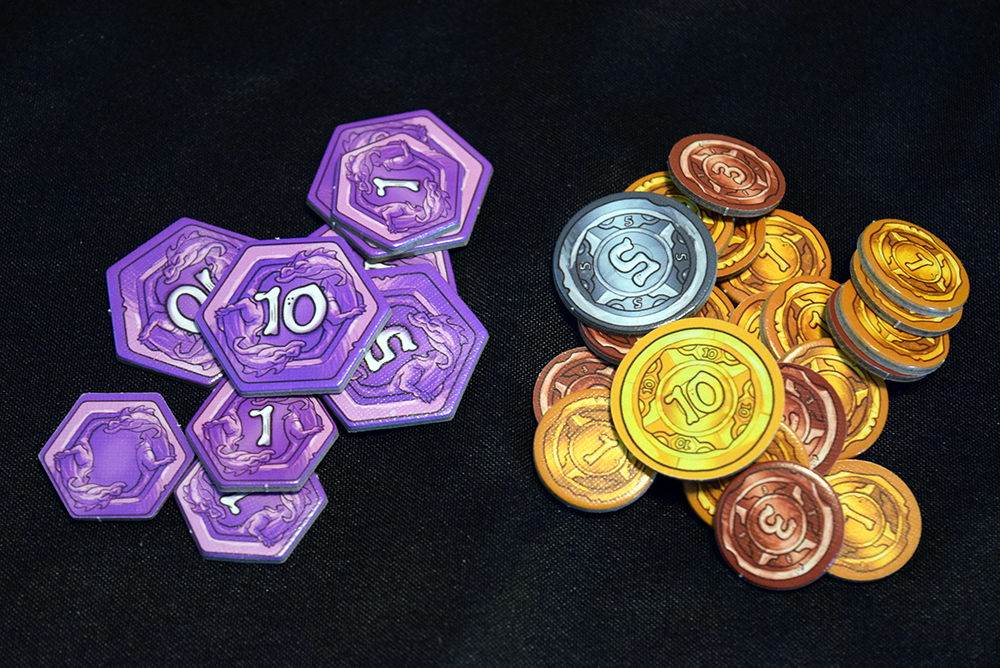 At that point, the game enters its end-round cleanup phase, which it brilliantly disguises as the heroes’ dungeon crawl.  The board state resets, heroes defeat monsters and gain valuable treasure, and then return to town to repeat the cycle until the boss monster is found and fought, and final totals of Vorpal Pieces are tallied to determine a winner among the merchants! 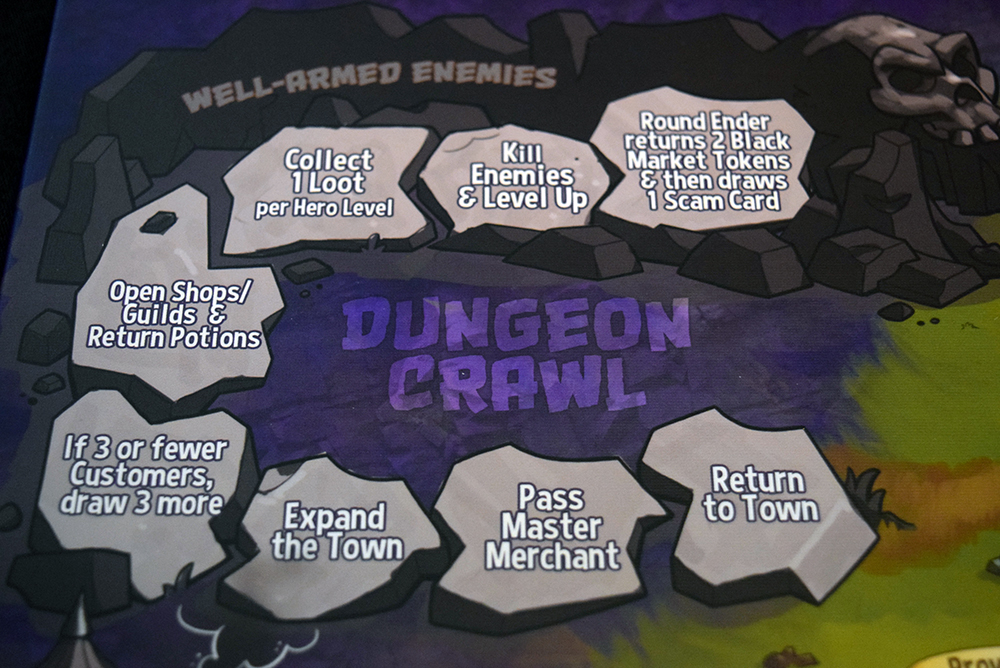 (We don’t really care about whether the monsters or the heroes win.  There will always be plenty more where those came from.) 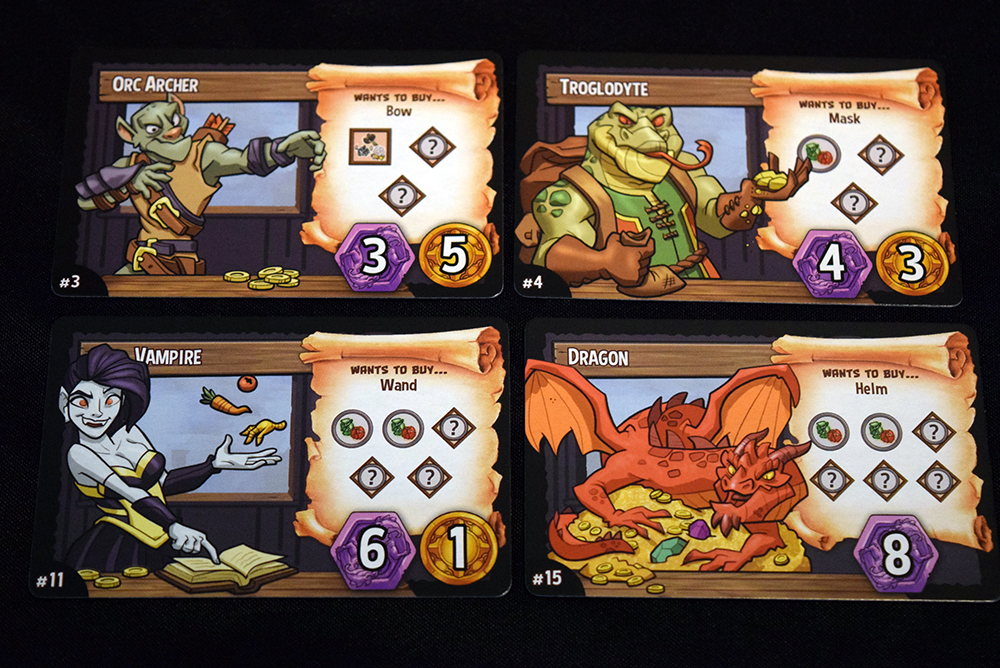 Jess: So, I’ll start by saying that Heroes Welcome did at first feel a little fussy – there are lots of little pieces to track and your turn-by-turn options are both somehow relatively limited and must be thought through pretty precisely – almost every shop can only be run once per round, so if you have a bunch of things you need to do, you’ve got to figure out what order they need to be done in, and you’ve got to hope no one else does them. 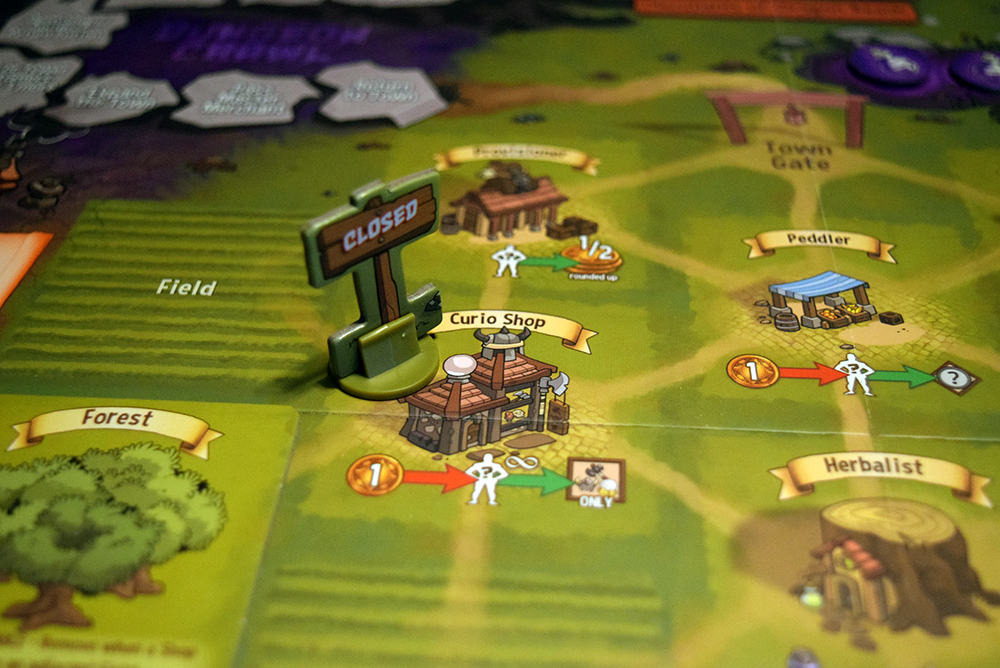 Andrew: Too fussy for you?

Jess: But that’s just it – once we got in the groove of it, I didn’t really find it to be a problem.  And when you manage to get the components you need to fulfill orders and turn a tidy profit, Heroes Welcome really makes you feel clever, know what I mean? 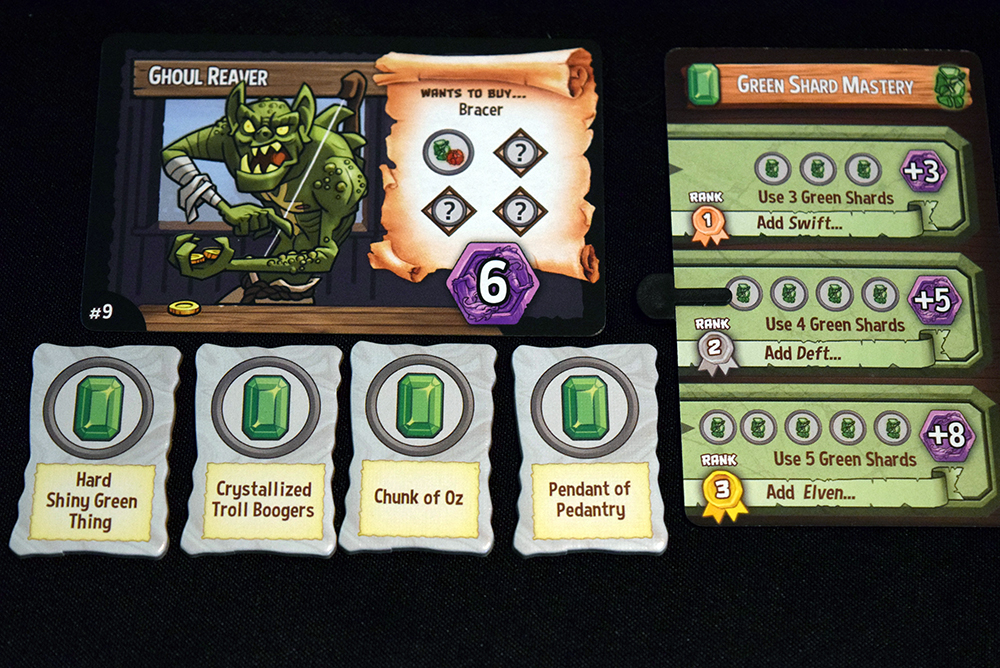 Andrew: Absolutely, yeah.  And on the other hand, it can be really tense as you watch spaces you need get used up by other players, and you have to think on the fly about redirecting your turn.  Most of the time there is something good for you to do, just not necessarily what you planned on doing at the start of your round.  It’s this interesting mix of tactical and strategic that I really enjoyed, too.

Heroes Welcome has great production, which is perfectly common for Pencil First Games.  From the artwork to the tiles to the little Closed signs you will put up on spaces when they get used up, Heroes Welcome is all about little details.  Every single piece of treasure has a tiny bit of flavor text, and the care that went into its design really shines through. 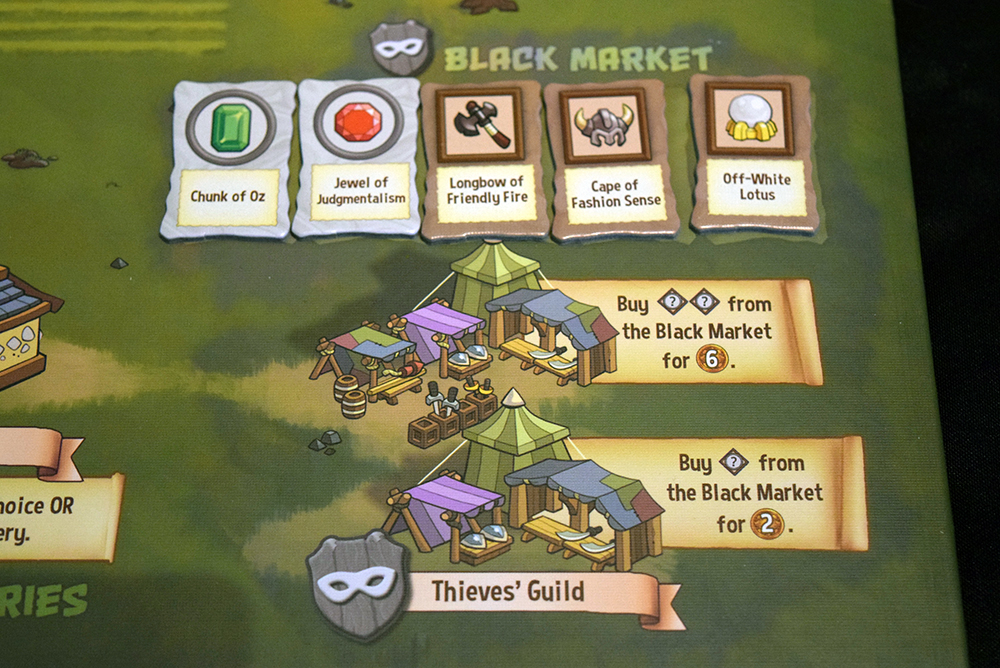 That said, there are a lot of little moving bits in Heroes Welcome  – every round, treasure needs to be distributed, customers show up, shops open, monsters shift, and the beginning of any player’s turn is likely to stall slightly as they take in the possibilities and limitations of the field.  And while every turn serves to limit that field, these restrictions can, as we mentioned, mean players will need time to adjust their thinking mid-stream, possibly forced to abandon a round’s plans a turn before they could be completed.  That can be frustrating, sure, but our biggest criticism was that it was just a bit, well, fussy, and all the little moments lost to that recalculation felt like distractions from the otherwise satisfying core of Heroes Welcome’s gameplay. 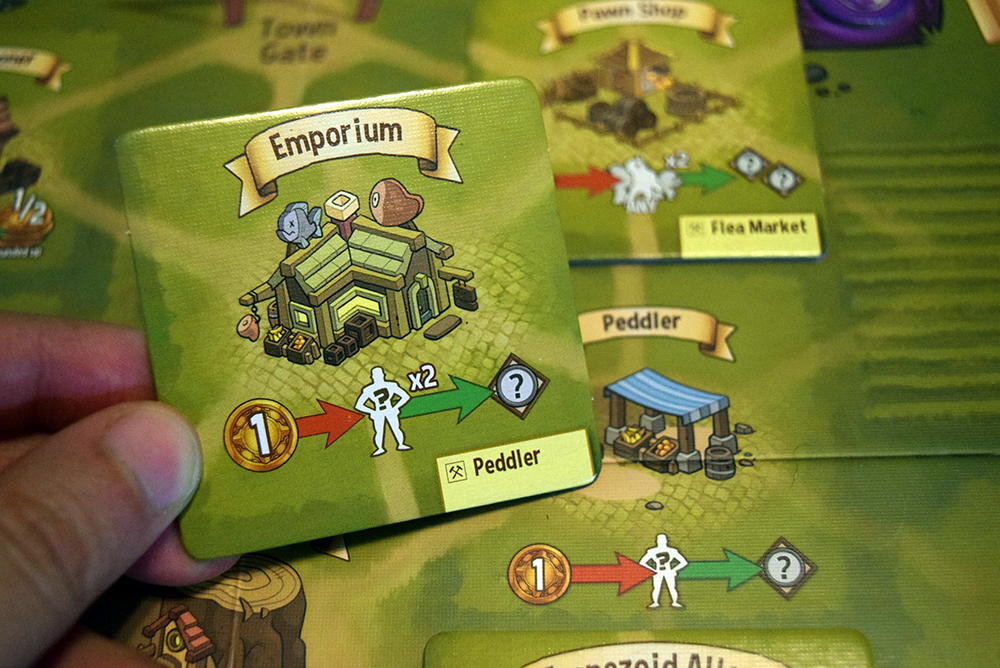 But that aside, we found Heroes Welcome to definitely be enjoyable.  And while it scales just fine at different player counts, we liked it most at 2, when we had the most options and could more reliably complete our plans without being fouled up by the machinations of our fellow merchants.  But at any player count, with solid mechanics and excellent production, Heroes Welcome is definitely a game we recommend for those who would rather earn some coin than bother trying to slay some silly old dragon.