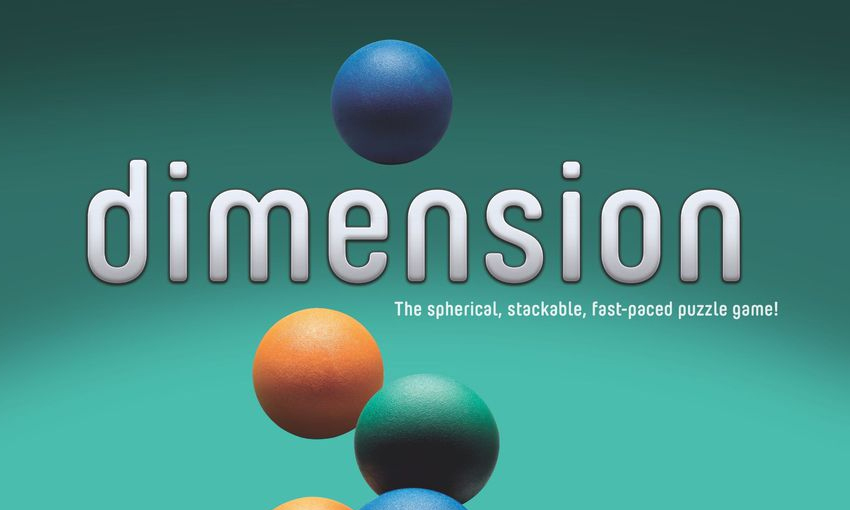 Dimension is a devilishly uncomplicated spacial puzzle, where the otherwise-easy task of stacking spheres in sequence gets complicated by the simple addition of a sadistic sand timer.

It shouldn’t be this hard.  Dimension presents its players with what should be a reasonably easy spacial puzzle – take the 15 colored spheres that each player begins with, and stack 11 of them while respecting a handful of adjacency rules.  But by adding nothing more complex than a simple sand timer, Dimension goes from a walk in the park to an exercise in panic-induced confusion that will leave you wondering why your hands have turned traitor and your mind has lost the ability to process simple concepts like ‘orange shouldn’t touch blue’.

Jess: Oh come on now, it’s not that bad!

Andrew: Ok, maybe it’s just that I’m bad at it.

We received a review copy of Dimension.  We weren’t otherwise compensated.

In Dimension, each player will start out with a tray full of spheres, specially designed to hold these otherwise roll-prone pieces in place.  Each round, players are tasked with piling up to 11 of those spheres any way they like, but always with respect to the six randomly-drawn Task cards. 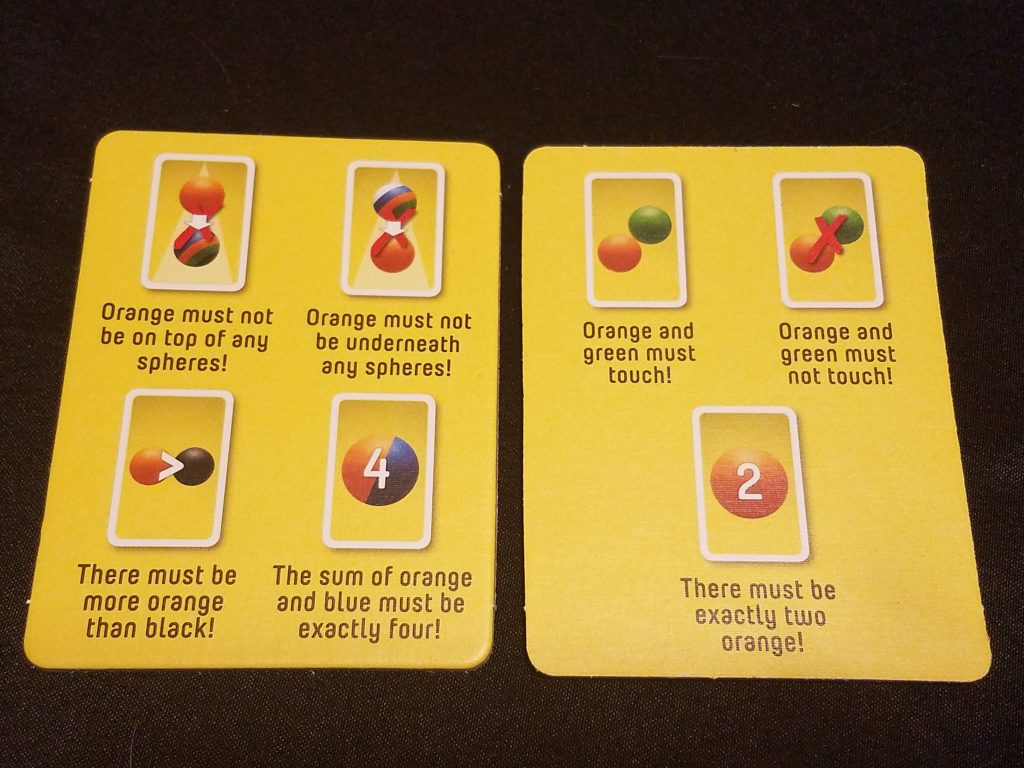 These cards dictate what players will have to do (or not do) in order to score points at the end of the round.  Some cards will act as hard rules on how many of a color needs to be in your stack, or ratios determining which color must be dominant.  Some will dictate adjacency – either colors which must touch each other, or which cannot, or where in the pile a given color is allowed to be.  Taken together, these rules will dictate how you can earn points in a given round, and each of Dimension’s six rounds are played over the course of 60 seconds. 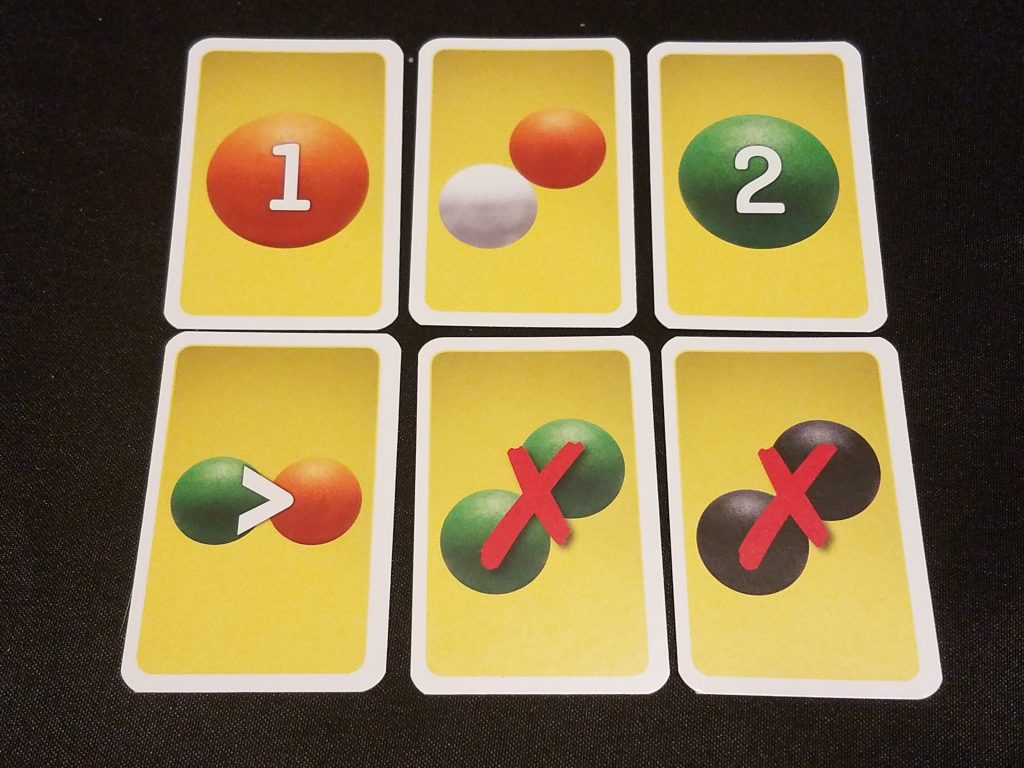 Andrew: Ok, so I’ve been pretty hyperbolic about how frantic Dimension is – 60 seconds is actually a reasonably long time when your only task is to stack 11 spheres.  But you’ll probably find yourself making a surprising number of mistakes as you rush to make sure you’re stacking as many of the 11 spheres as possible while respecting the Task cards. 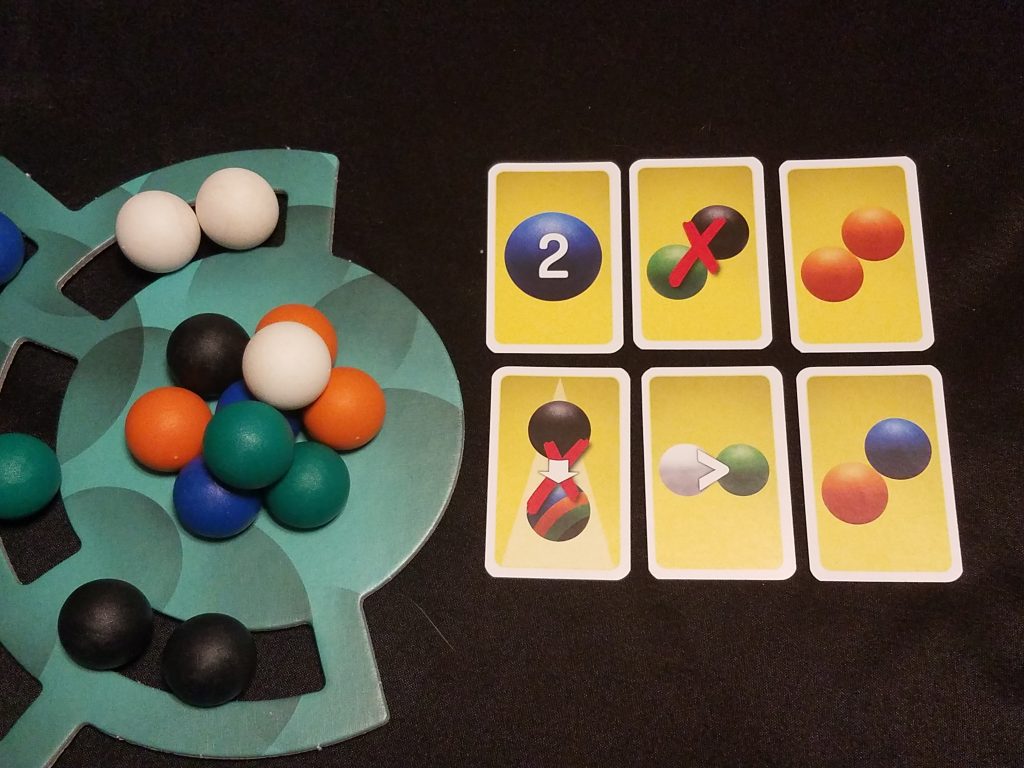 And stacking all the spheres as accurately as you can is important, because players will earn 1 point for every sphere they used, but will take a -2 point penalty for each Task card they haven’t followed perfectly.  And should a player somehow manage to respect all the tasks and use every color sphere, then they will get a bonus token.  These bonus tokens will give a varying number of points at the end of the game based on how many you’ve collected…or a penalty, if you haven’t collected enough. 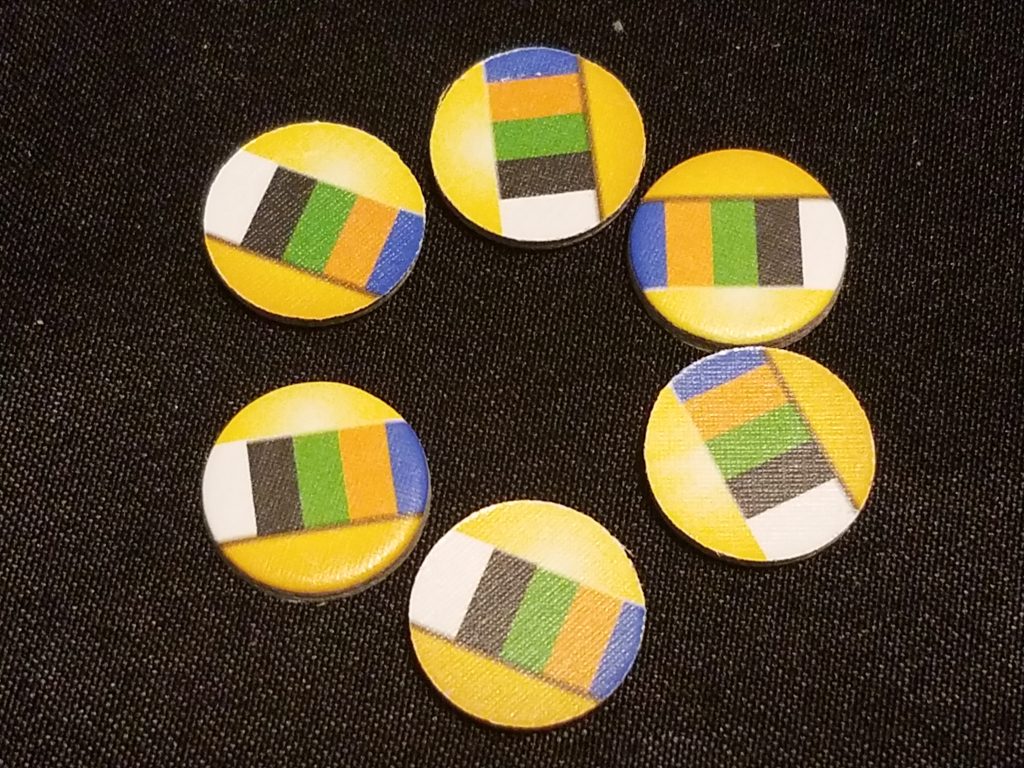 Jess: So, you know I love stacking games, so I mostly had fun with Dimension.  There were some little issues I had with it, though, and I think you did too, yeah?

Andrew: For sure.  Kidding aside about me just being not very good at real-time games, I actually hate games which rely on a sand timer, especially ones where you’re concentrating on something very intently while it runs.  Most of the time, we didn’t even notice it had run out!  So while that’s an issue that’s easily solved with a cellphone alarm, the in-box timer worked against the feel of Dimension.

Jess: Yeah, but like you say, that’s just an issue with sand timers in general.  For me, it’s the fact that the Task cards are random, and there’s absolutely nothing that protects you from drawing a bunch that are mutually exclusive – blue must touch green, blue can’t touch green.  That sucks!

Andrew: Yeah, for sure.  The rules even address it by saying, basically, deal with it – in the event that they contradict, you just need to decide which rule or rules you’re going to ignore.  That feels pretty lousy.  But the saving grace there is that it affects everyone equally, at least, so no one player gets screwed.

Our final complaint about the design of Dimension is, admittedly, another minor one, but oh man, these point tokens are kinda atrocious.  The size progression, colors, font, none of it makes any sense, and for an abstract game with such simple, functional components, these stood out in a bad way.

But please don’t think that the above stopped us from enjoying Dimension.  For a very certain quantity of abstract challenge, it presents an engaging spacial puzzle that absolutely wouldn’t work without that dastardly time limit.  While it certainly won’t be for everyone, if you like this sort of gameplay delivered in a tight, effective package with nicely produced bits (those dang tokens besides), then you should definitely take a look at Dimension!