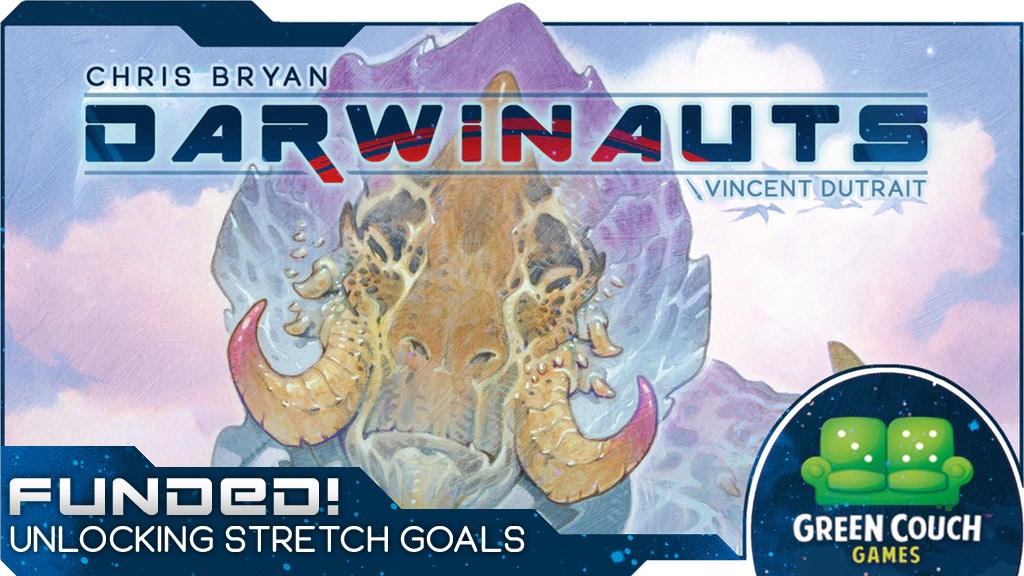 When I first saw Darwinauts, I have to admit, I was a bit confused.  See, when I think of publisher Green Couch Games, what comes to mind are small boxes holding really fun games.  But Darwinauts, up on Kickstarter now, wasn’t particularly small – rather, what we have here is a game of inter-dimensional exploration where players will race to catalog exotic species before finding themselves drawn back through the rift to their home dimension! 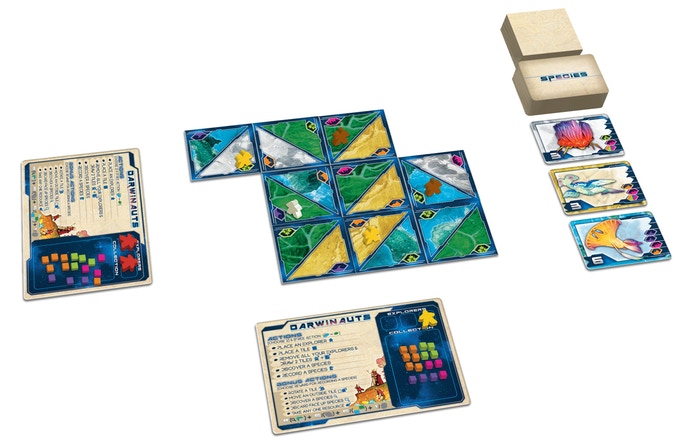 We were provided a prototype for this preview, with the option of requesting a finished version.  We were not otherwise compensated.  Some images used are from the Kickstarter campaign, and everything is subject to change.

In Darwinauts, you and your fellow explorers have gone through the rift into a parallel dimension, where you are working to discover the wondrous species that live there.  Vincent Dutrait’s art is (unsurprisingly) stunning, illustrating these amazing creatures and bringing visual splendor to the game.

Andrew: Now, let’s get this out of the way – Darwinauts is really an abstract game with a very pretty theme pasted onto it.

Jess: That’s definitely true, but when it’s this awesome, I don’t mind a bit of pasted-on theme.  Even our prototype is already gorgeous! 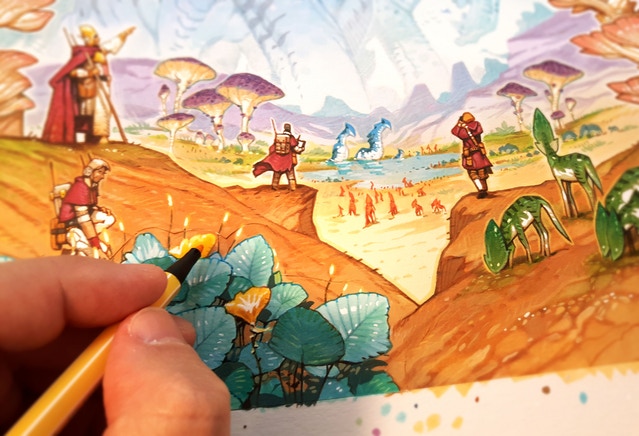 While Darwinauts isn’t the modest box we’re used to from Green Couch Games, the weight of the mechanics certainly aren’t particularly heavy.  Over the course of the game, you will select from a variety of actions as you race your fellow explorers to gather the most prestigious discoveries from this new dimension.  Your per-turn actions include: 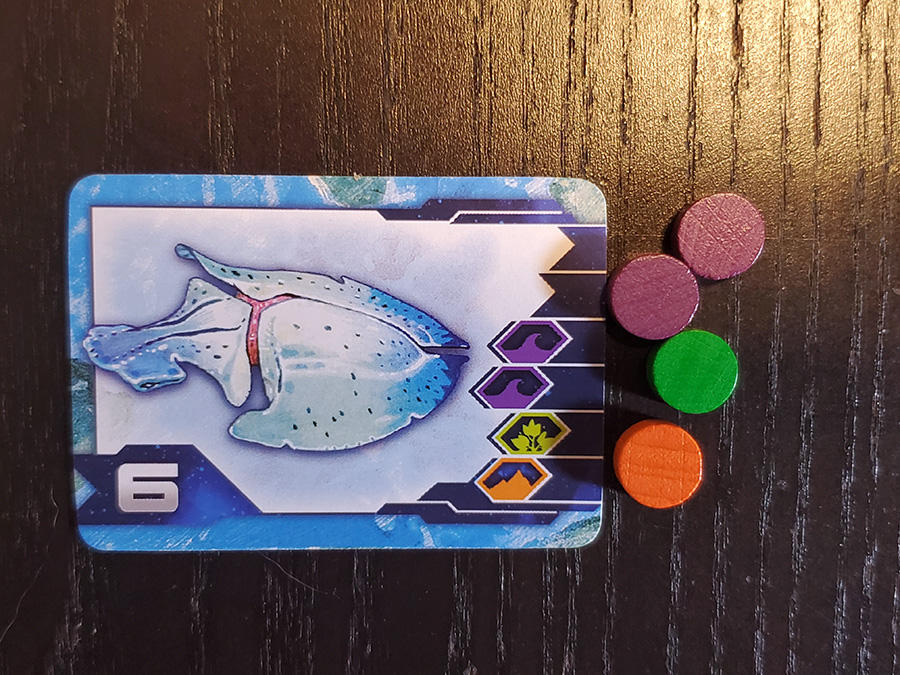 So over the course of the game, you and your fellow Darwinauts will explore the ever-expanding tableau of terrain tiles, trying to gather up resources more efficiently than other players to score the biggest pile of points.  Interestingly, each player has the opportunity to rotate tiles to manipulate the terrain areas, expanding or reducing the placement potential for each resource type (since you can’t place an explorer in the same region as another). 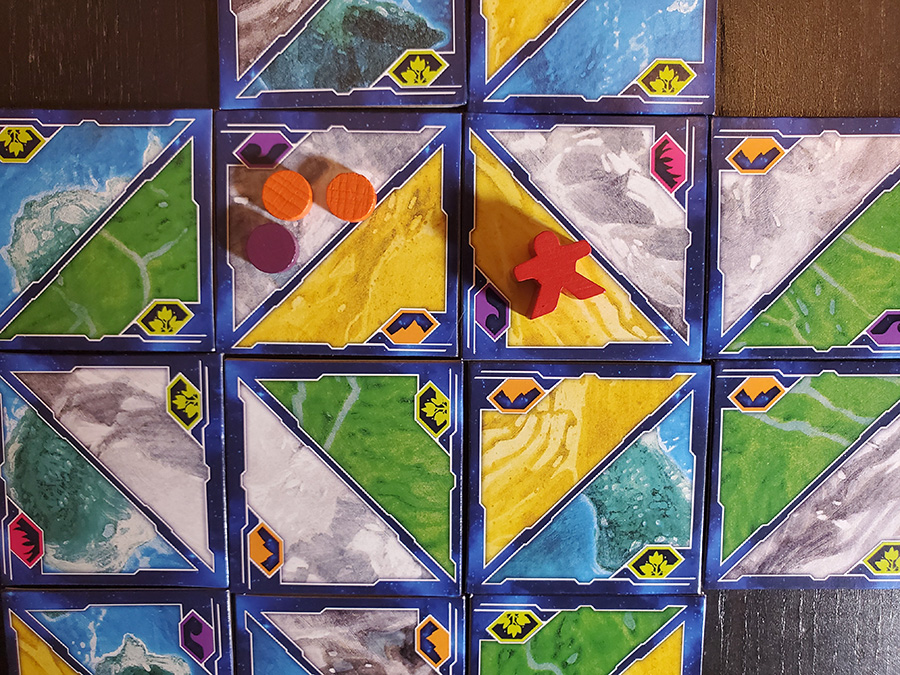 Jess: But not just that!  When you pull your explorers, you’ll get a resource for every connected tile in that color’s region!  By being smart about how you add and rotate tiles, you have the potential to give yourself big piles of resources with each explorer you pull, and that’s critical if you hope to be more efficient than your opponents!

Andrew: Absolutely!  Because it it’s heart, Darwinauts is a race against time.  Sure, you want to score more points than your opponents, but you’ve got to remember, somewhere toward the bottom of the tile deck is the Rift… 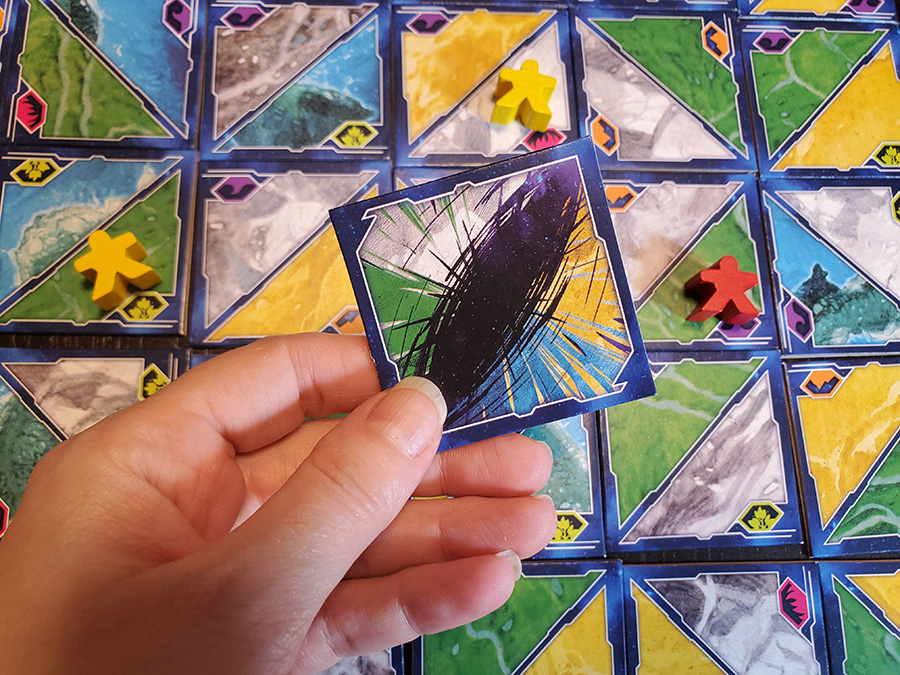 At a certain point, the Rift tile will get drawn, triggering the second act of the game.  From then on, players will remove tiles from the board, collapsing the play space steadily until final scoring.  This second act of Darwinauts takes on a completely different tone, with the play space rapidly becoming claustrophobic and your options limited.  At the end of the game, it’s the player who has cataloged the most valuable species who will take home the most prestige, with some bonus points being awarded for certain sets of species cards. 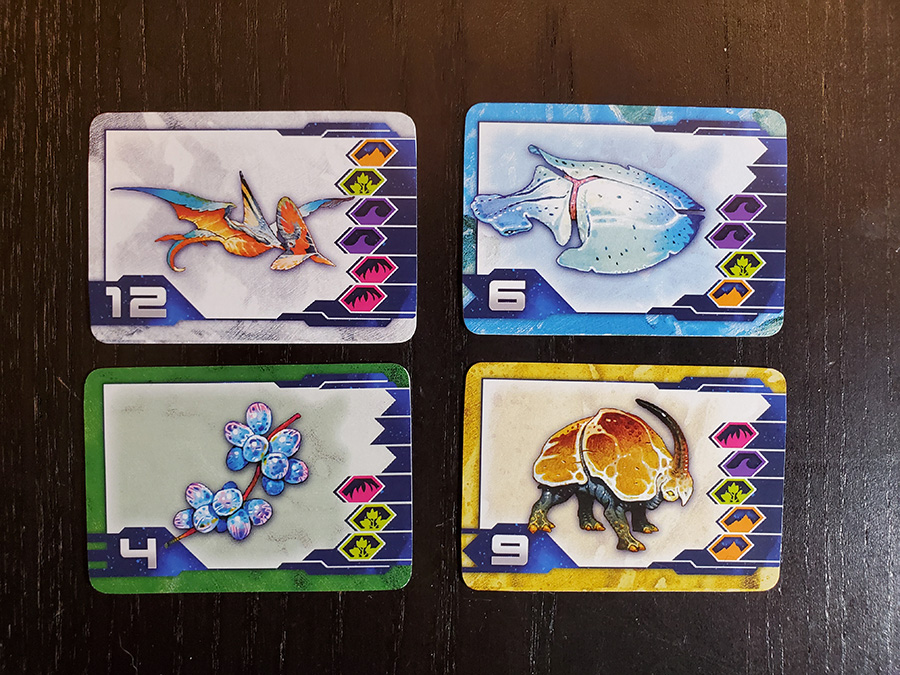 Andrew: Far and away, I think the Rift mechanic is my favorite part of Darwinauts.  Without it, I think Darwinauts would be a fun, if straightforward, puzzle.  But once that tile comes out and the field starts collapsing, that’s when you get all kinds of fun tension!

Jess: For me, my favorite part was the tile manipulation and the set completion aspect.  Well, that and the art.

Andrew: Absolutely, yeah.  It’s a pretty game, and with the Kickstarter stretch goals having made the cards bigger, the final product will be even prettier!

Darwinauts is closing out its run on Kickstarter right now, and it’s well past funded and knocking off stretch goals.  If a clever abstract game with a gorgeous theme sounds like your speed, we definitely recommend heading over to the Kickstarter and checking it out!