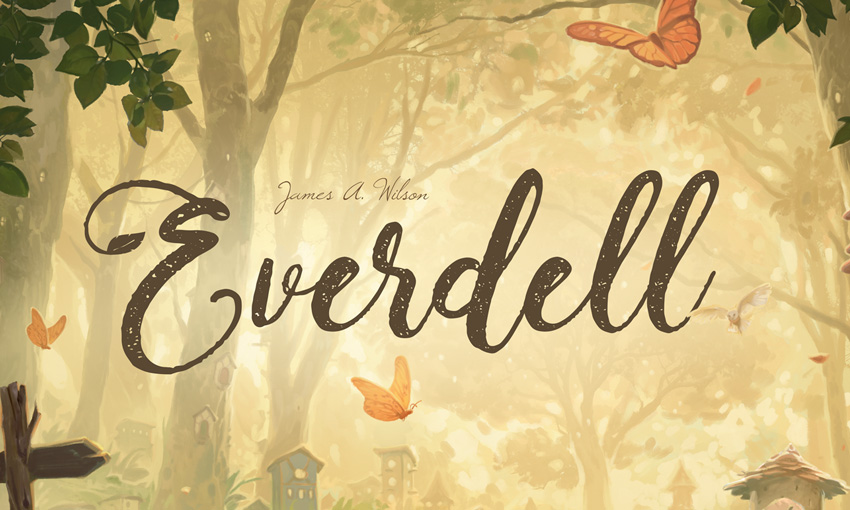 In the Valley of Everdell, the time has come for the animals to form new cities and prepare for the coming winter. As the leaders of these newly established territories, you and your fellow players will direct workers, construct new buildings, and convince animals from all over the forest to join you budding community. You only have 3 seasons to expand before the winter comes and whomever creates the most prosperous city before the turn of the season wins! 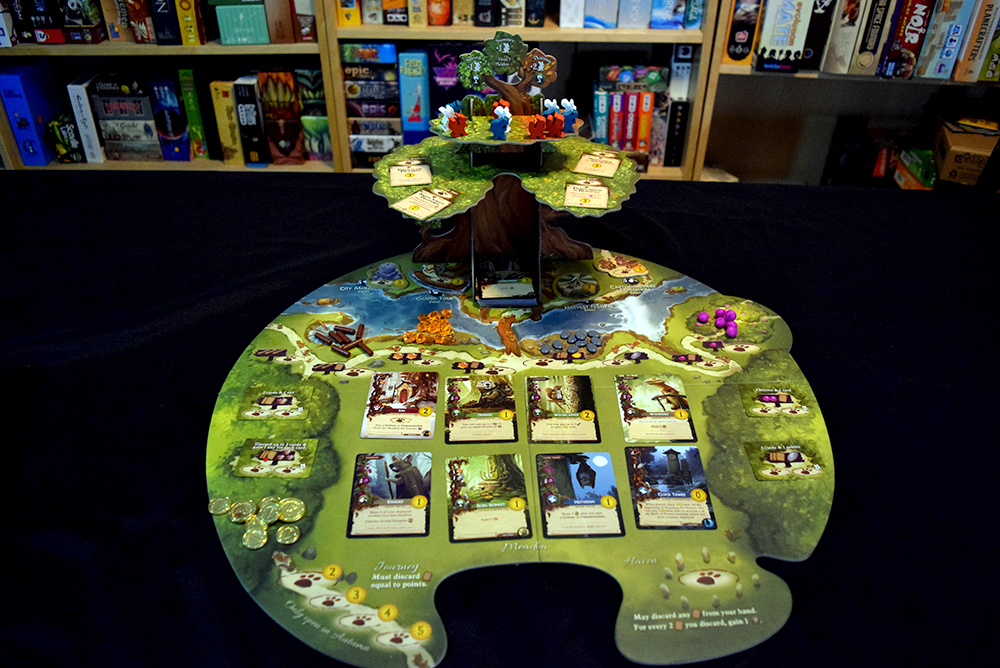 At first blush, Everdell has an impressive table presence. An array of beautifully illustrated cards are laid out on the board which sits beneath the large, central tree and wonderful, high-quality components like squishy rubber berries and resin sap tokens are nestled against the river bank. The first time I saw the game I was entranced. 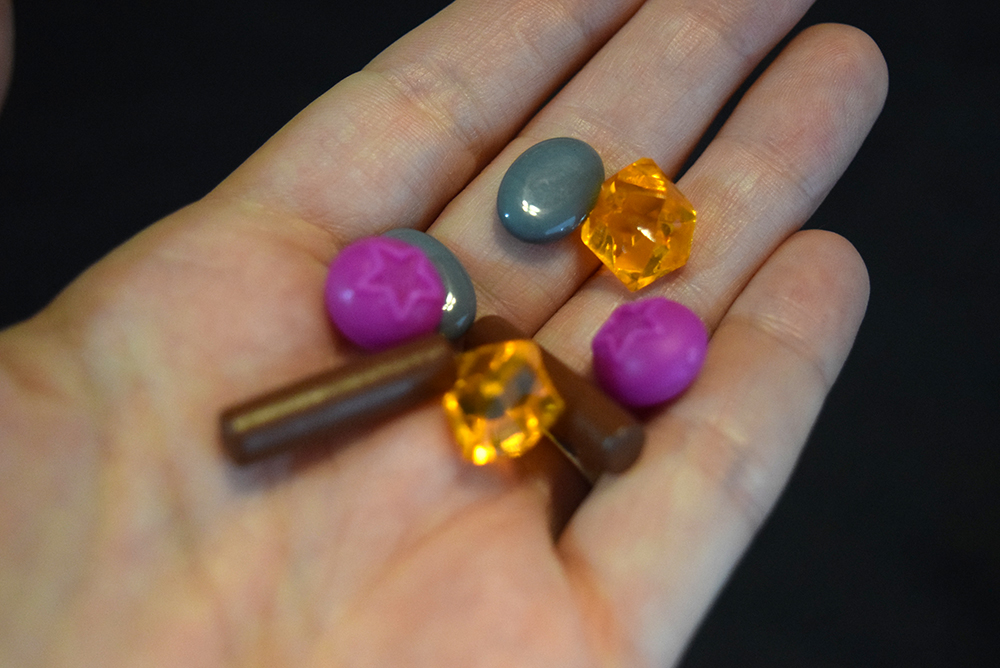 Gameplay is where it falls apart for me a little.  But I’ll get to why in a bit.

Everdell is a worker-placement/engine-building game. Each turn, you will either place a worker, play a card, or prepare for season (an important cleanup action that recalls your workers and runs your productivity engine). The game is broken up into 3 seasons and at the start you only have 2 workers, gaining more at the end of each season. Many spaces on the board have room for only 1 worker (unless you are playing with 4 players), so this means your choices are severely limited at the beginning of the game. Between a lack of meeples and spaces to place them, the first two placements will feel crucial to determining how the rest of a player’s game goes. 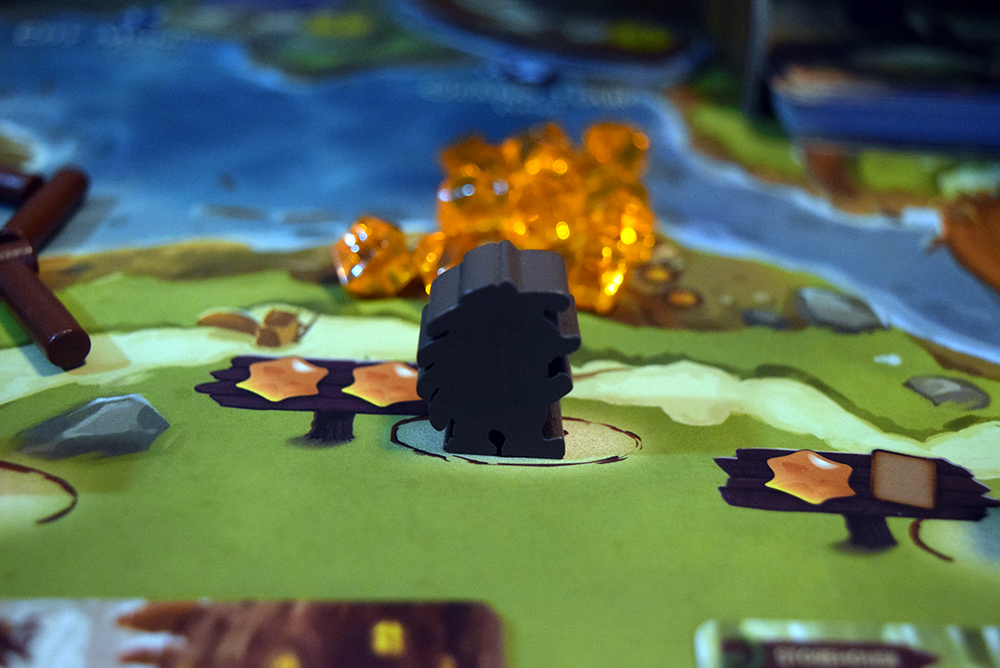 There are three types of spaces that workers can be placed on: locations, events, and destinations. Most locations will give you a small amount of resources or help you manage your hand of cards. Once a worker is placed, they cannot be removed until the end of the season. This means the resource spaces are precious and, more often than not, you’ll spend quite a few turns cursing out a hedgehog that has parked itself on the one stone production space. 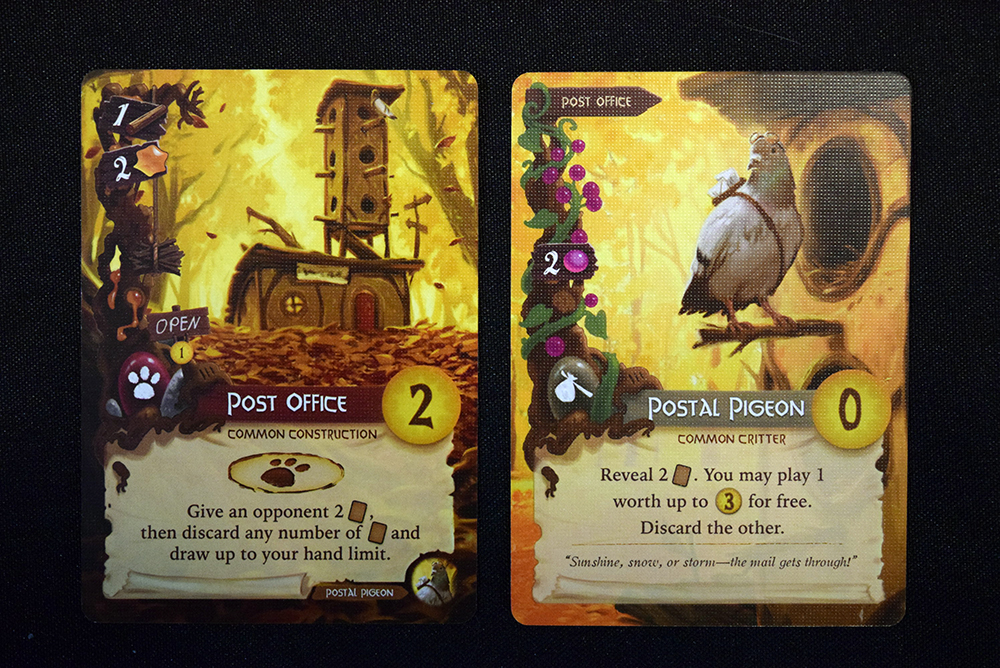 When you have enough resources, you can play a card from your hand or from the selection available to all players. The building cards are pretty expensive, but they offer you the ability to hire matching animals for free, so if you get lucky enough to have access to a set you can get two placements for the cost of one. Both buildings and animals give you bonuses or abilities as well as points to be scored at the end of the game. 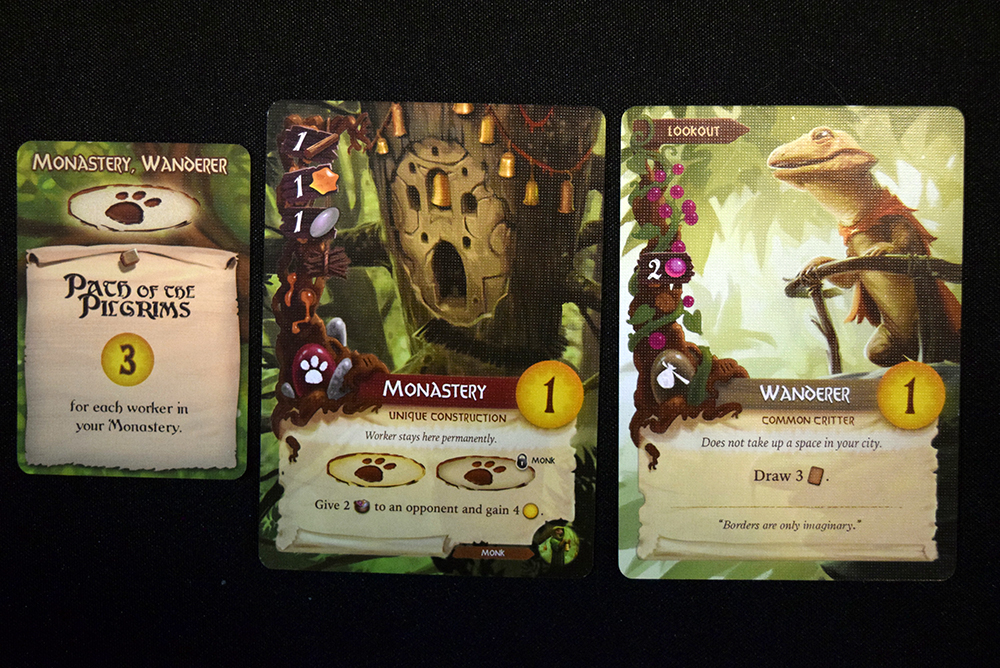 Event cards are basically goals. If you have the requirements for an event (usually a set of buildings and/or animals), you can fulfill it to score points.

Lastly, destination cards are locations that you build in your city that become spaces that players can place their workers on. 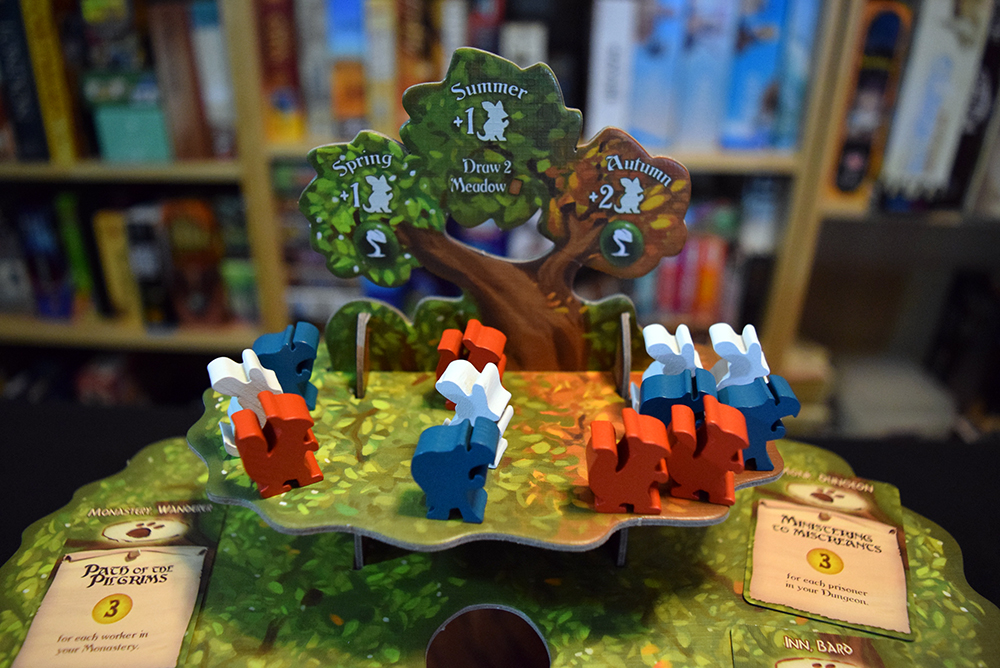 You’ll play through your turns placing workers, hiring animals, and building up until you decide to pass. Once you do, you will go through the Prepare for Season action, which mean you’ll take back all your workers and take the action of the upcoming season. In Spring you gain 1 new worker and activate all the Production cards in your city. In summer, you gain another worker and you may draw up to 2 cards from the board. Autumn is the same as Spring except that you now gain 2 workers. 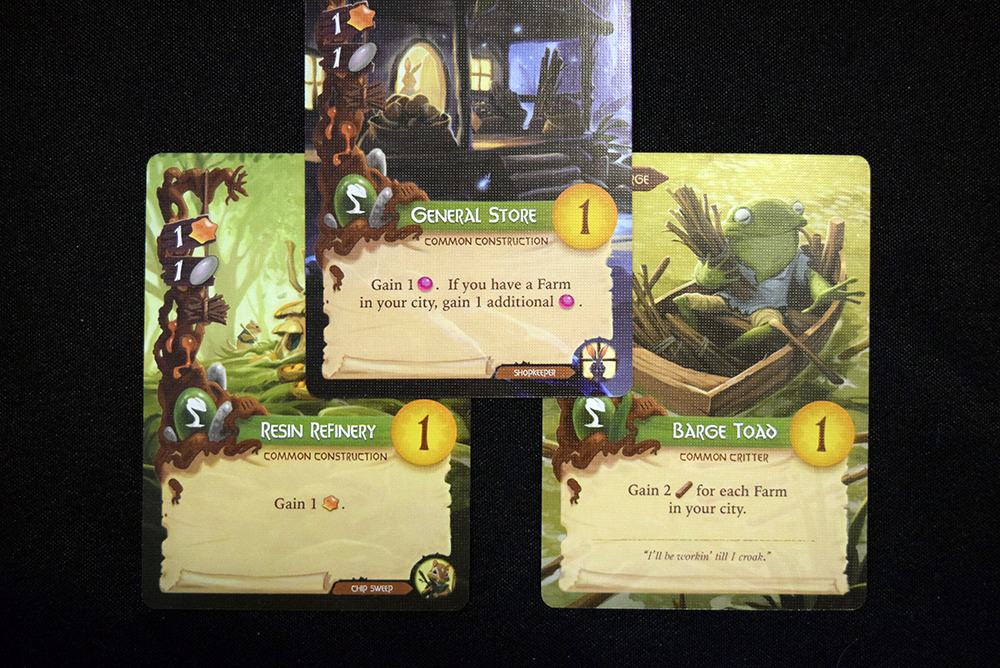 The fascinating thing about Everdell is that you can Prepare for Season any time you like and you do not have to wait for the rest of the table to finish their seasons before continuing, meaning players can be in different seasons at different times.

While it can be a little odd that one player might be in summer while another is wrapping up spring, I like that there aren’t blocks of time in the middle of the game where players are sitting around waiting, since that takes the pressure off players who haven’t quite finished their season, and it keeps the game moving. 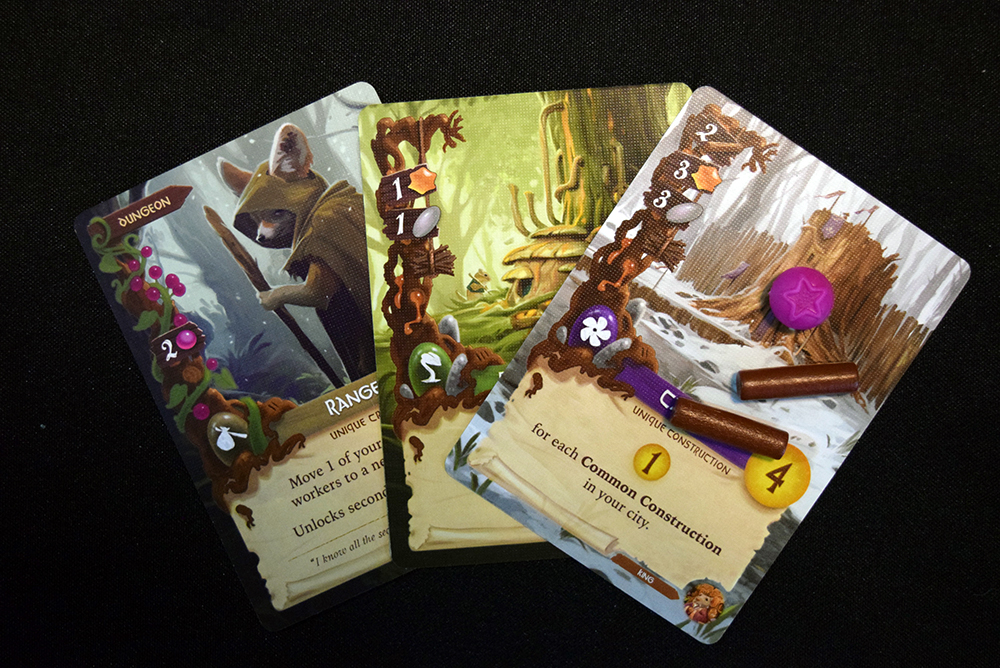 As a whole, the game is wildly appealing for me. You’ve got adorable animals, building cities, and goals to achieve through the game – all of these things are stuff I love to see in my games!  I should adore Everdell!…  But you probably remember that I said Everdell kinda fell apart for me in its gameplay, and here’s why. 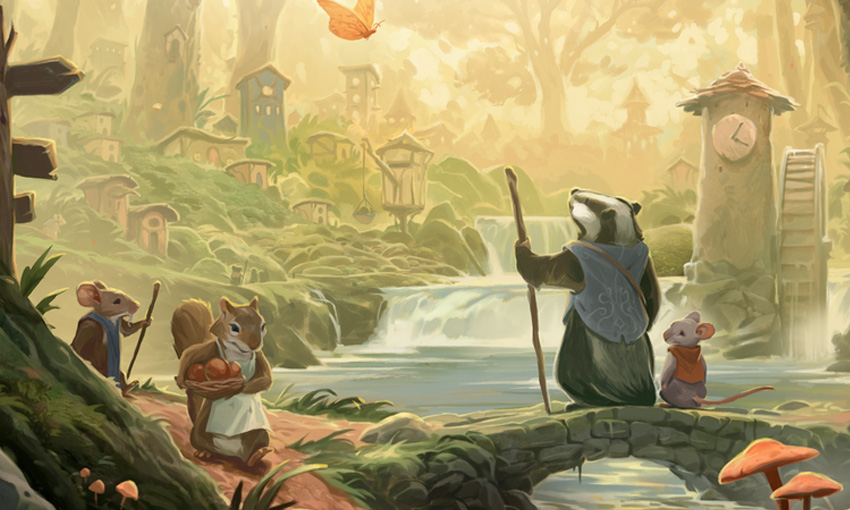 First, part of it is that the serene beauty of the theme is mismatched to the actual gameplay. The razor-thin tightness to each turn speaks to something a little more cut-throat than the pastoral woodland theme, and I almost feel like I am playing a post-apocalyptic game where resources are so scarce that animals are almost coming to blows over tree sap and pebbles. I might have a hand of awesome buildings and animals to hire, but to play most of them I need to wait an entire season or two for a placement space to free up before I can get what I need to add them to my territory, and that’s kinda half the game gone, right there.  I also found that very few if any events were being scored. There are plenty of places to gain points, but getting the combos you need for those spaces is up to luck most of the time. 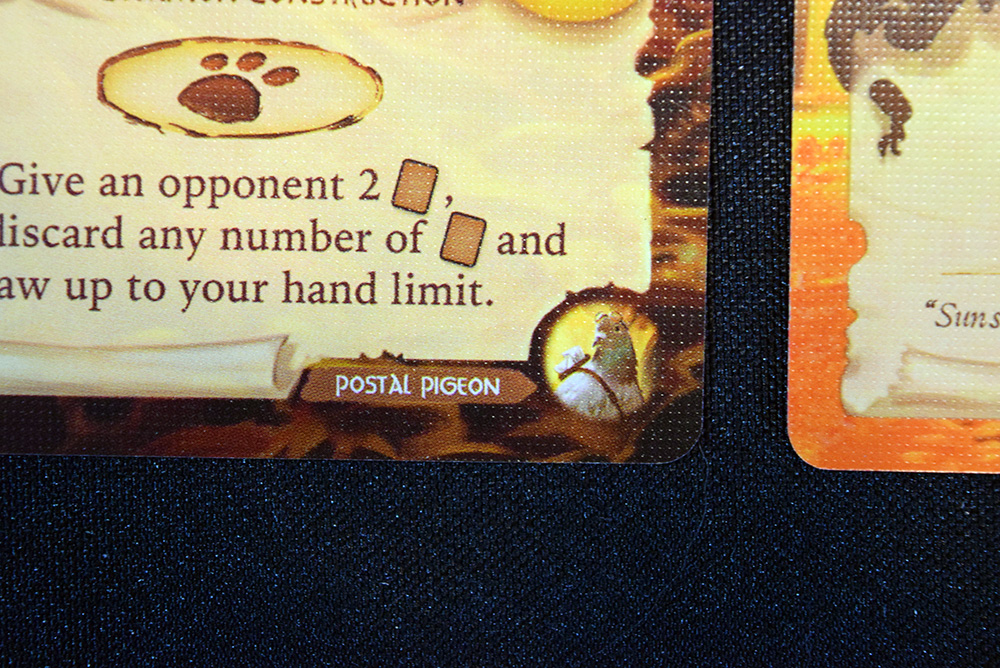 And that’s another huge thing – there are tons of synergies in Everdell.  Buildings that let you recruit characters for free.  Characters who let you take advantage of other players’ spaces.  End game scoring bonuses that reward certain combos of cards.  I don’t know if there is a single card in Everdell that just does one thing.  And that’s really, really cool! Except that you’re basically never guaranteed to get the cards you need to make your awesome combo work, either because another player scooped them up or because you can’t quite manage to get the resources, or because they simply never got dealt out at all.  In a lower-player game, the cards don’t get churned enough, and in a higher player game the cards you need are just as likely to get taken or discarded by other players.  The engine-building is satisfying when it works, but just as often, it simply doesn’t, given Everdell‘s huge pile of cards. 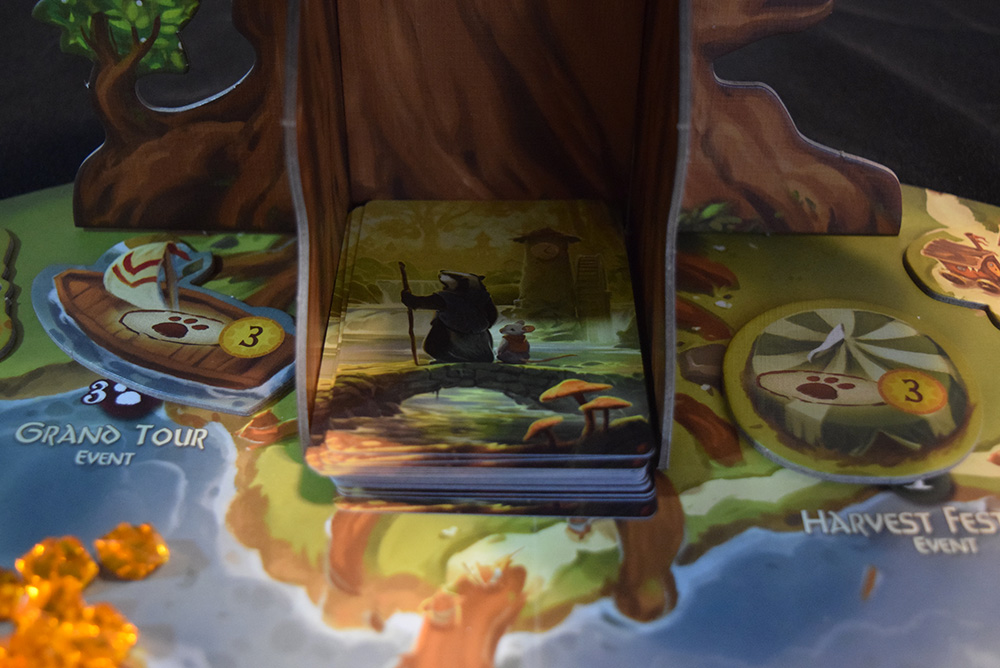 And ‘huge’ is one of Everdell‘s strengths, but definitely one of its weaknesses.  Aside from the cards, the physical presentation, the thing that attracted us to it, is also a real problem.  That giant tree in the middle of the table?  In a 4 player game, someone is probably going to get stuck sitting behind it, especially since each player is creating a tableau of 15 cards apiece (which may contain cards that rely on seeing other players’ cards to be used).  There are cards and bits in the tree as well as beneath it, and it’s really difficult to get a sense of the state of the game at a glance. 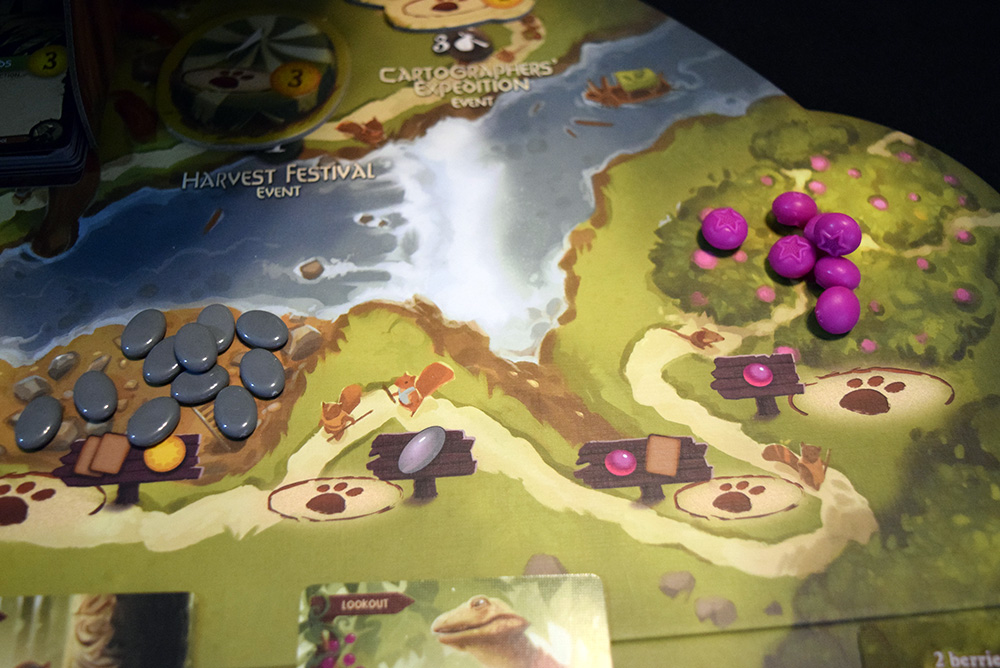 Everdell is beautiful and clever.  It’s also extremely fussy and never quite gives you the opportunity to do everything you wish you could.  For every moment of awesome synergy, there are a dozen moments of quietly reading too-small text across a dozen cards trying to figure out what to do with your last badger, now that some stupid squirrel has taken the berry space you needed to make your whole plan work.  I hate that I don’t love Everdell, because it has all these amazing pieces, but somehow the whole just didn’t come together for me, and that’s made me genuinely sad.

All that said, I think Everdell is a fine game for anyone who will enjoy its tight gameplay and won’t mind some of the oddities caused by its gorgeous presentation. If you are looking for a challenge, Everdell will deliver.

You can Pre-order here: