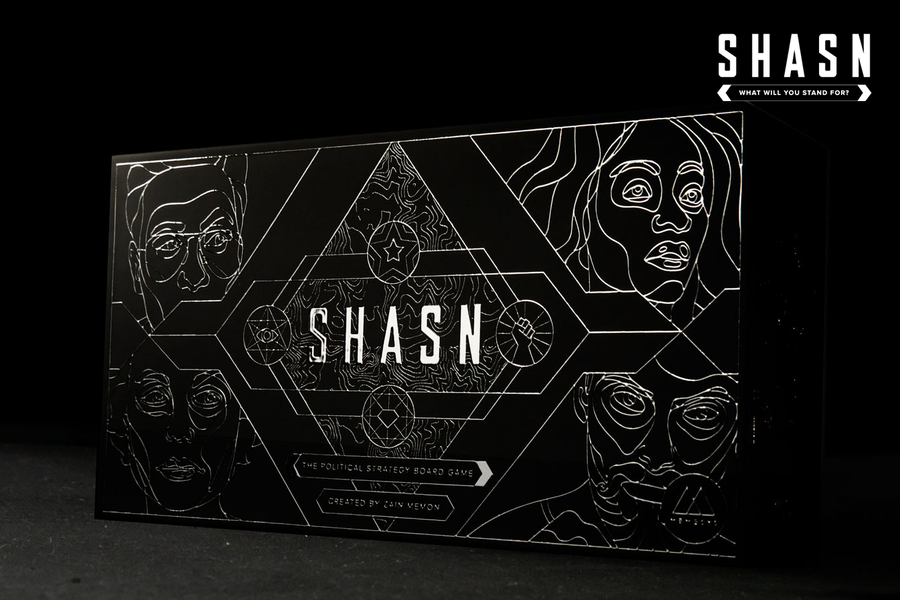 
When we first saw SHASN, we immediately featured it in one of Jess’ weekly Kickstarticles – the game looks stunning, and as soon as we started diving deeper into its mechanics, this ‘political strategy’ game captured our curiosity.  During Gencon, we were fortunate enough to meet Zain Memon, SHASN‘s first-time designer and we got to get some of the story behind his magnificently-funded and beautifully presented game.  Memon was also kind enough to send us home with a prototype, and it has only continued to intrigue us as we have dug into it. 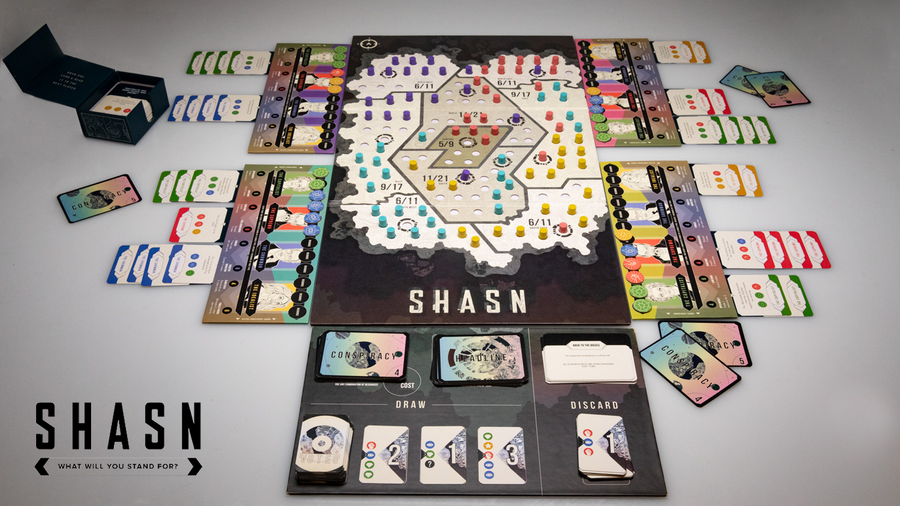 SHASN is, at its mechanical heart, an area control game.  Players are politicians who are trying to win by establishing majority control over key voting districts.  In order to do so, they will be spending various resources in order to secure votes.  In this way, SHASN is something we’d seen before – familiar gameplay concepts which were easy to grasp and dive into.  However, where SHASN diverged from the expected was in the mechanism by which players get their resources. 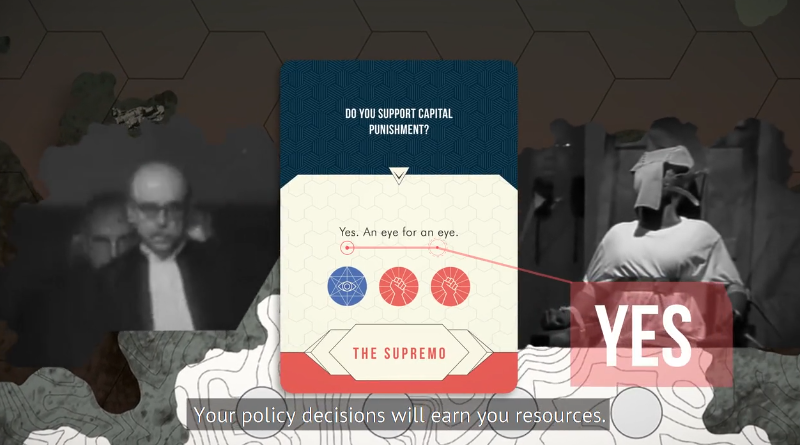 Each round, you will answer a question – these questions vary in subject and seriousness, but the position you take will give you resources appropriate to the particular political leanings implied by your answer.  Each answer you give also gets added to your politician – the character you are playing in-game – and as turns go by you will build out what sort of political animal you wish to be.  These broad archetypes, the Capitalist, the Showman, the Supremo, and the Idealist, each have their own strengths, and by leaning hard into one ideology, you will unlock new abilities. 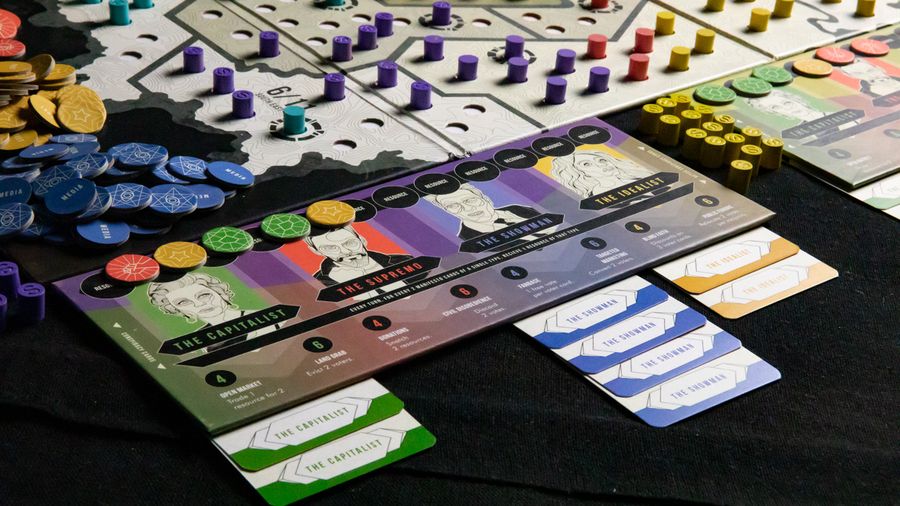 And this is where the heart of SHASN comes to light.  Because it is entirely possible that you will be faced with making a choice between your own personal views, the answer that will earn you the resources you need, and the answer that will align you with your politician’s growing political platform.  But there’s a catch.

Zain Memon told us that he wanted to make a game that would stoke conversation around politics, without people getting mired in the cult of personality which inevitably forms around politicians.  In keeping with this theme, you actually won’t know which answers align with what ideological platforms, or even what resources they will give you.  You need to focus on the policy question itself and deal with the consequences! 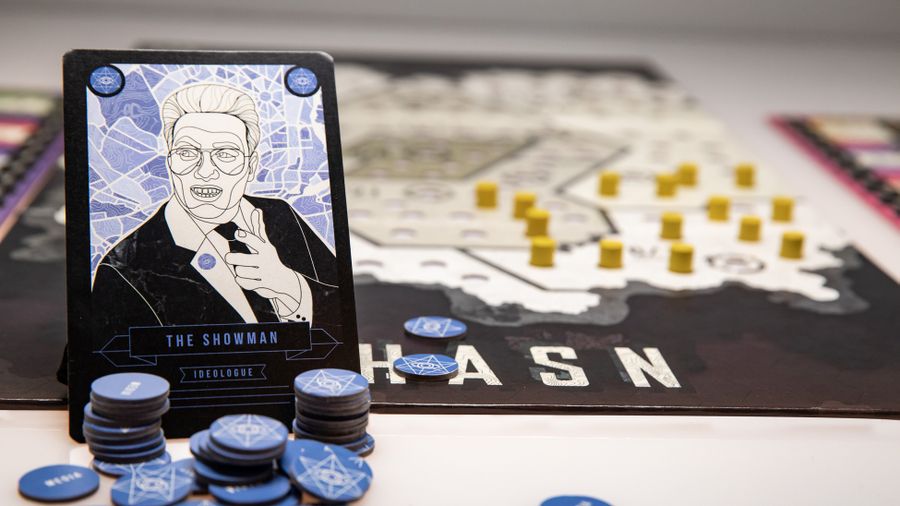 Over the course of the game, you will rapidly shift from simply answering questions and securing voters to making bigger and bigger moves.  Gerrymandering, that bane of modern politics, is a devastating influence in SHASN, as players move voters around to break up majorities and shore up their own weaknesses.  Conspiracies shift the state of the game in unpredictable ways, and Headline cards can punish (or possibly reward) players whose voters live in the ‘volatile’ zones within districts. SHASN ramps up nicely, with early turns being quick and decisive, while later turns are meatier and require more planning and strategy. 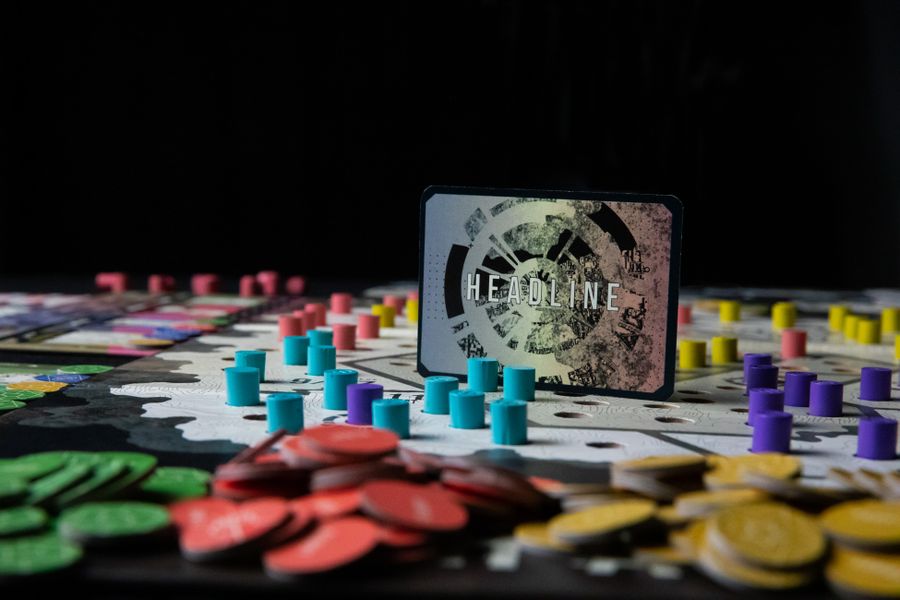 Overall, we’ve been very impressed with SHASN – the presentation of even the game’s prototype is simply stunning, and by making the components abstract, it lacks the identity politics which its creator was trying so hard to avoid, while making it viable to act as a sort of console for a variety of different political scenarios – the Kickstarter features modern American politics, modern Indian politics, the politics of ancient Rome, and a political campaign based on Earth 2040.

SHASN feels incredibly unique – at once new and familiar – and feels less like a typical ‘political’ game of arguing and debating (which inevitably falls flat with us), and more like an intriguing exploration of political questions, all the while featuring a deliciously cutthroat mechanical core that will leave you gnashing your teeth in annoyance as your opponents gerrymander your majority away – or grinning viciously as you do the same. 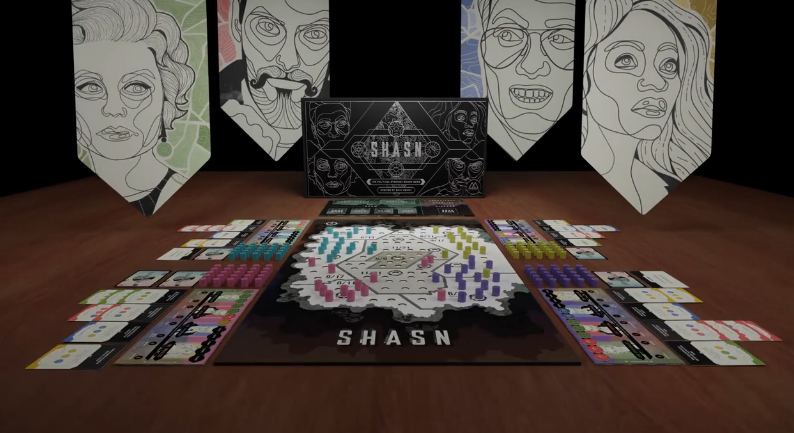 SHASN is now in its final 48 hours on Kickstarter, and we highly recommend checking it out, even if you’re not a fan of ‘political’ games.  We certainly aren’t, and we’ve found something here that feels really special. Check out SHASN here on Kickstarter.