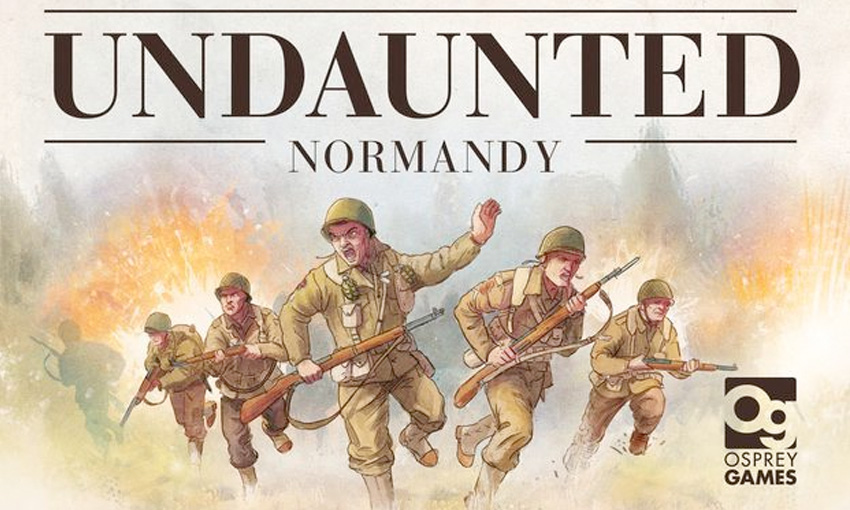 Undaunted: Normandy is a really unique take on 'war gaming' (without ever really being a war simulator).  The asymmetrical gameplay, thanks to the scenario-driven variety in setup, makes for an engaging 2 player experience, while the mechanics never feel overwrought or fussy.

I have a confession – I don’t really love games that glorify (or even just simulate) historical conflicts.  I know, I know, great game design ideas have germinated in the fertile soil of real-world warfare, but as subject matter, it usually puts me off.  And furthermore, the more accurately a game seeks to simulate the grueling realities of those conflicts, the less interested I am in engaging.  And with that preamble firmly in place, I can say that Undaunted: Normandy defied at least some of the expectations its name and cover art set in my mind, and I enjoyed it far more than I thought I might. 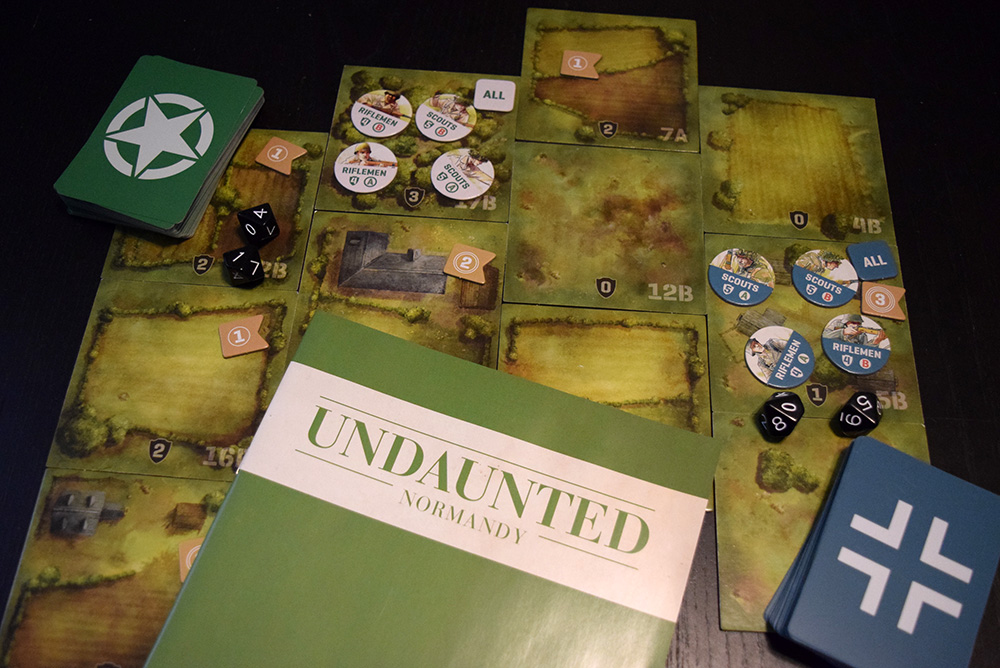 We received a review copy of Undaunted: Normandy.  We weren’t otherwise compensated.

Andrew: Now, I realize that doesn’t sound much like a ringing endorsement.  ‘Liked it more than I thought I might’ isn’t the same as ‘this is a fantastic game’.  But I wanted my opinion grounded in some context.  Liking a game I’m immediately excited to play is easy.  Having a game challenge my first impression is something else.

Jess: Same here, with similar results.  But we can discuss after we do the gameplay thingie. 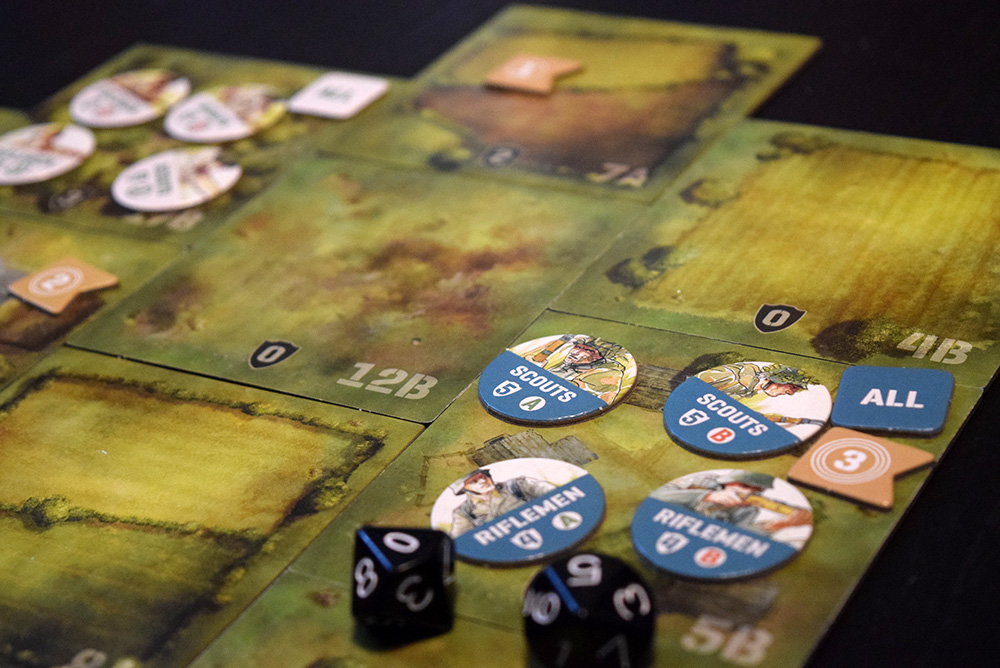 In Undaunted: Normandy, players will control one of two rifle platoons deep in the French countryside, each vying for control over various strategic locations.  The terrain is comprised of map tiles, arranged according to whatever scenario you are playing, each of which confers different defensive bonuses for units hunkered down on them.  Your deck of cards depicts your soldiers, and each card played will allow you to take an action with that specific unit. 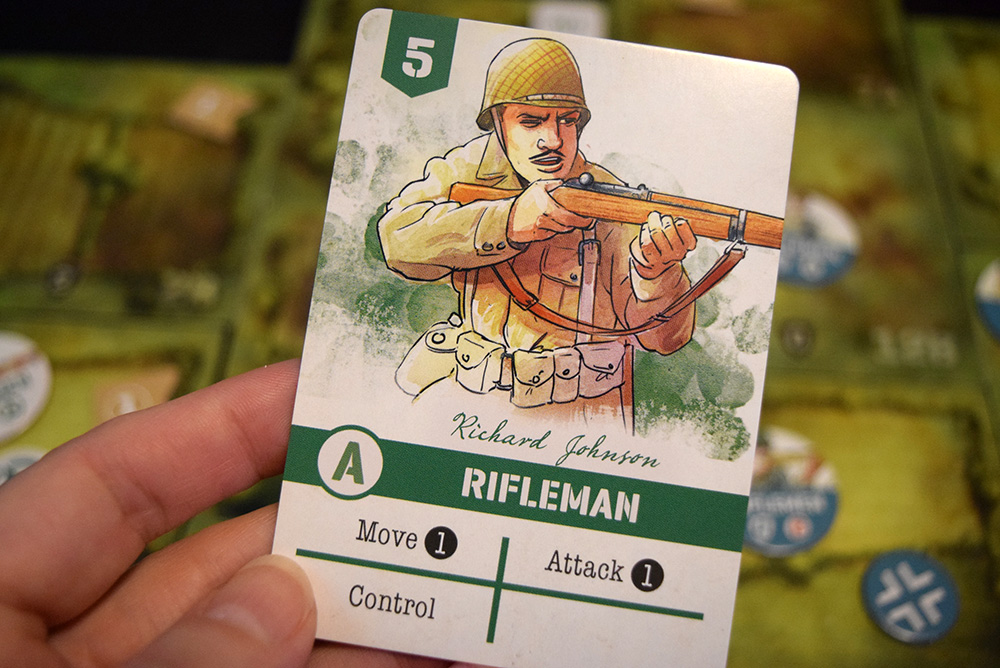 Your soldiers are represented by tokens on the board, and each type of soldier by a single token.  That means that when you want to move your Rifleman A, you will play the matching card from your hand and move that token across the field.  There are a handful of officer cards in your deck which aren’t represented by tokens, but instead (appropriately enough) act as coordinators of the battlefield, letting you draw more cards, move extra units, and add more cards to your deck from your supply (a limited pool of reinforcements based on what scenario you are playing). 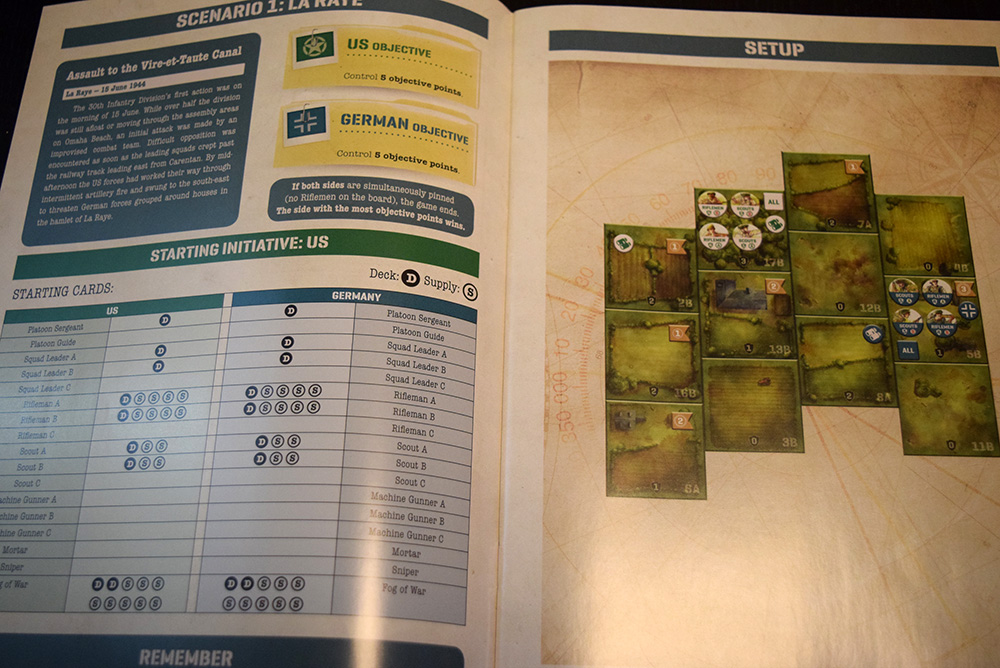 The balance of cards in your deck is where the design of Undaunted: Normandy starts to show some real genius.  Every card you add to your deck allows you to activate that unit more frequently, as they will be drawn more frequently.  However, when your unit get successfully attacked (a simple calculus, comparing your unit’s defensive value against a die-roll by the attacker), then you must remove cards matching that unit – first from your hand, then discard pile, then deck.  Finally, if you have no cards to remove in any of these locations, the unit’s token is removed from the board. 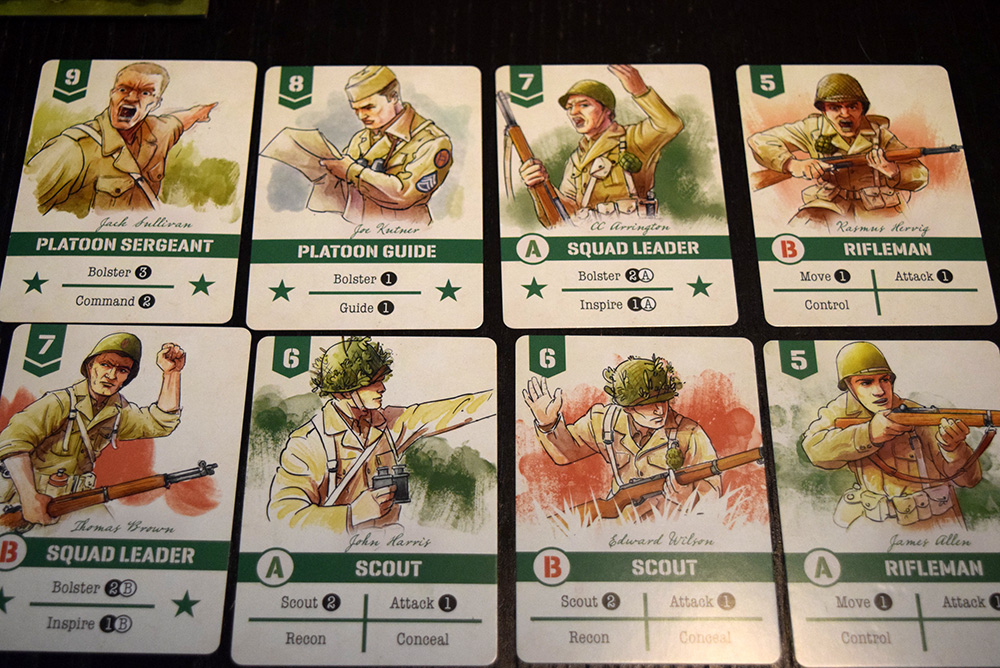 Jess: That ‘casualty’ mechanic is really clever.  It means that every time a unit gets attacked successfully, it’s less likely that you’ll be able to draw cards for them, which is a neat way of showing the chaos of battle as you are less able to coordinate the movements of troops under attack.

Andrew: Absolutely.  And not only that, but the cards you remove are gone from the game.  Forever.  That permanence makes for a sense of weight – with every attack, you are permanently damaging the opposing side…and they are likely doing the same to you. 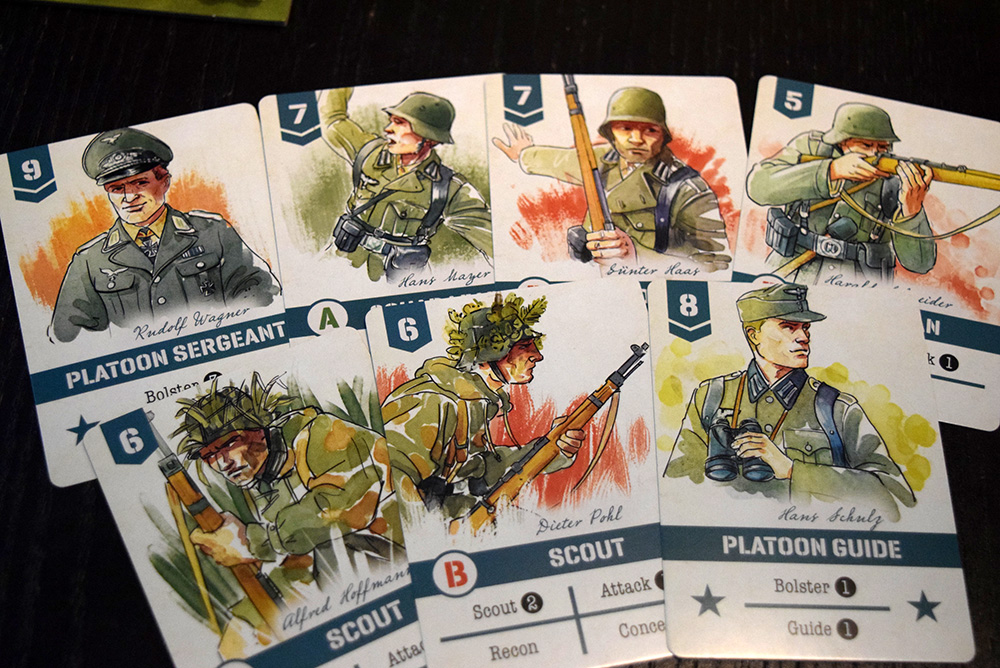 Victory in Undaunted: Normandy is determined by which scenario is in play, but usually revolves around controlling a certain number of control points or pinning your opponents in place.  The scenarios occasionally introduce asymmetrical goals and decks, so that each player has a different challenge to overcome. 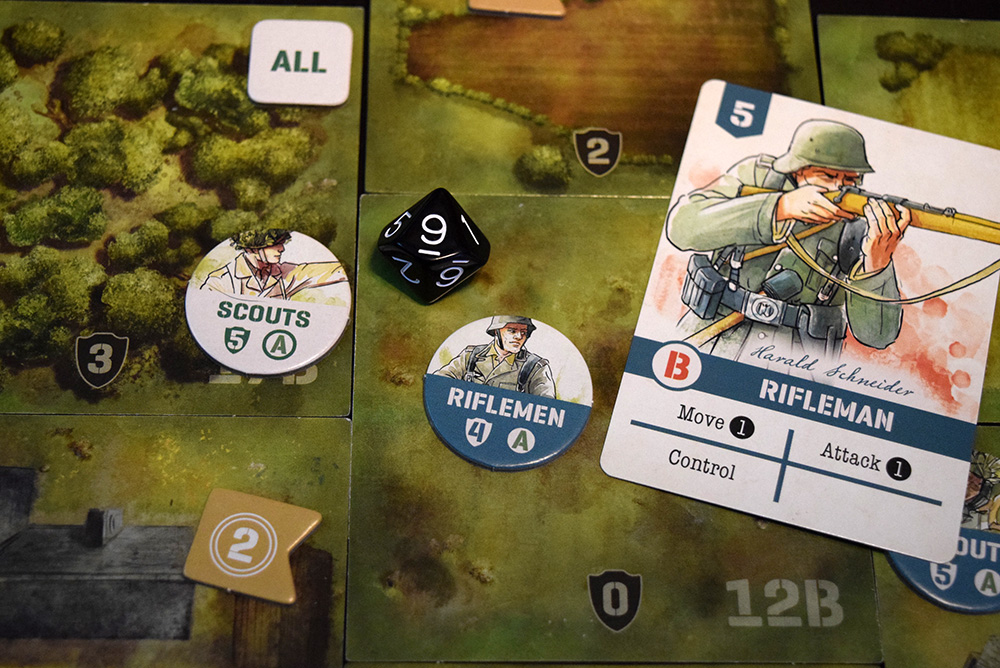 Jess: Speaking of challenges, as far as my opinion on Undaunted: Normandy, I think I like games about wars even less than you do, and dislike highly-contentious games in general.  So, to be honest, Undaunted: Normandy really had its work cut out for itself.  And just like you, I’ve got to say it surprised me in a bunch of ways.

Jess: Well, like I said, the combat system is simple and elegant, and it’s a lot easier to engage than most ‘war simulation’-style games I’ve ever played.  Not that Undaunted: Normandy is a war sim by any stretch, it’s definitely more abstract than most of those, but it surprised me how playable it was. 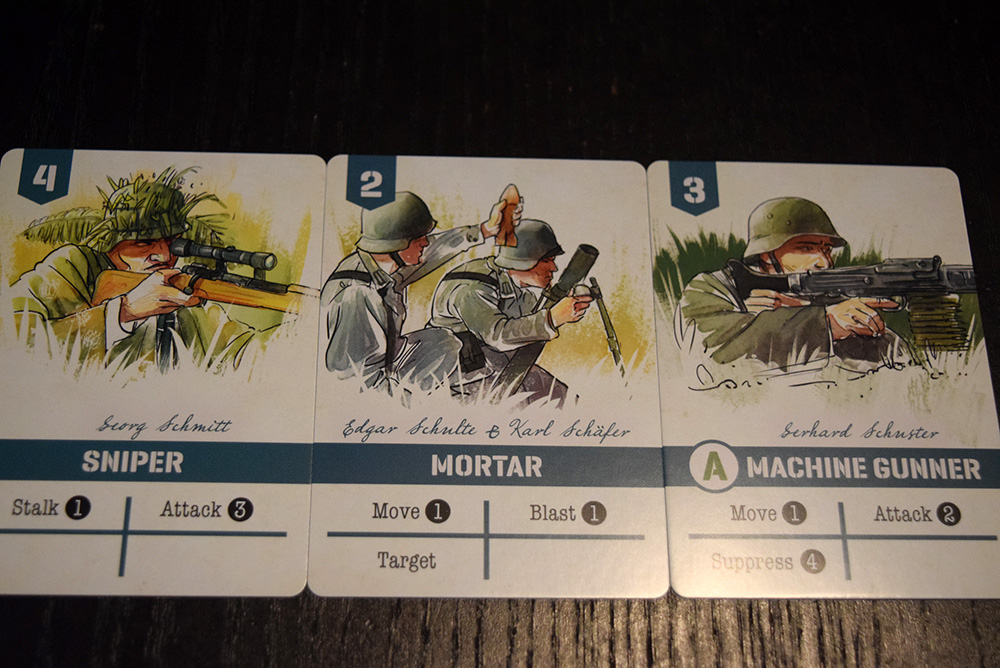 Andrew: Same, honestly.  I think the combination of deckbuilding and strategic area control is a really effective one.  It’s going to provide an experience that people who enjoy either will appreciate, while giving other folks somewhere in the middle to meet.  I think there’s just so much to like about how Undaunted: Normandy is designed, and it comes through in a million little ways which make it genuinely inviting for people who might not want to get bogged down in an hours-long military simulation.

Jess: On the other hand, strategy gamers don’t always love randomness, and between the card draws and the dice, Undaunted: Normandy is definitely has that flavor.  But it’s all about making the best of the cards your dealt.

Andrew: For me, that was the best part – It was fun to adapt on the fly, as the luck of the draw dictated which of my units could engage and how I was able to advance across the board.  I also thought that, presentation-wise, Undaunted: Normandy’s best visual element were the cards themselves, a splash of art in an otherwise abstract game. 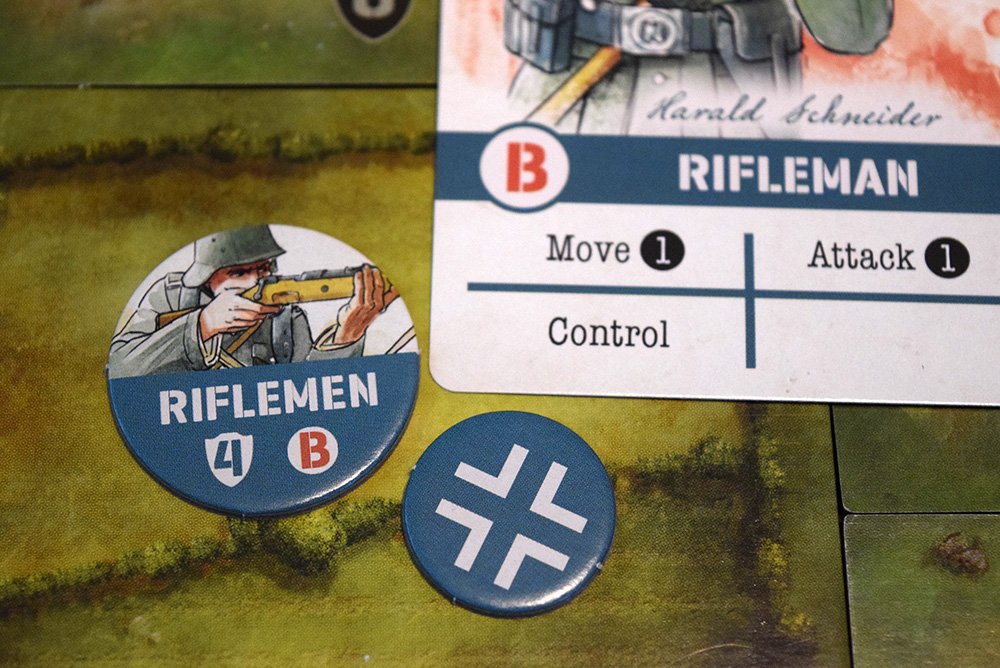 Now, what is lost on us, what will almost never be a selling point in games we play, is the game’s historical underpinnings.  Designer David Thompson has gone to great lengths to try and capture the story of the 30th Infantry Division and their time in Normandy in 1944.  Not being history or war buffs, any details about the accuracy of the scenarios (which are based on historical events) were lost on us. 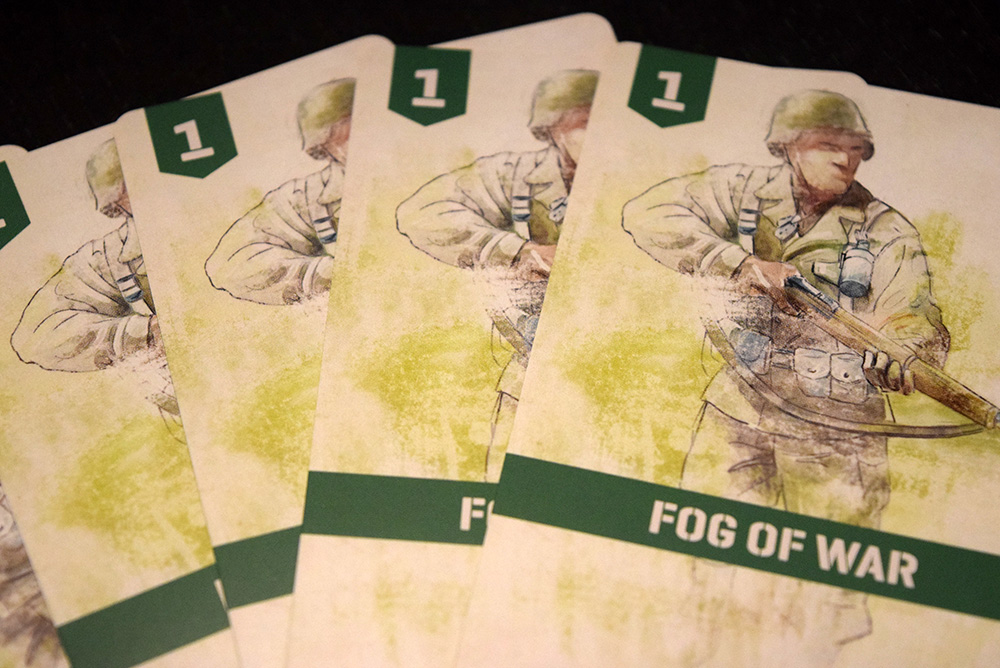 However, the inevitable reality is that, being a historical war game set in World War II, it meant that one of us had to play the Germans.  Which, I’ll be honest, doesn’t feel particularly good in this context – the word Nazi is completely missing from the rules or scenario book and there aren’t any swastikas to be found, but even sanitized thusly, there is no avoiding the reality that one player is controlling their military.  The acceptability of that is entirely for each player to decide, but we found it distasteful to say the least.

Jess: I feel like we sort of had this conversation when we reviewed Escape from Colditz, another Osprey Games title.

Andrew: We did, and that game was brilliant in a lot of little ways too, despite, or maybe because, of its theme.  It’s just a matter of taste, really. 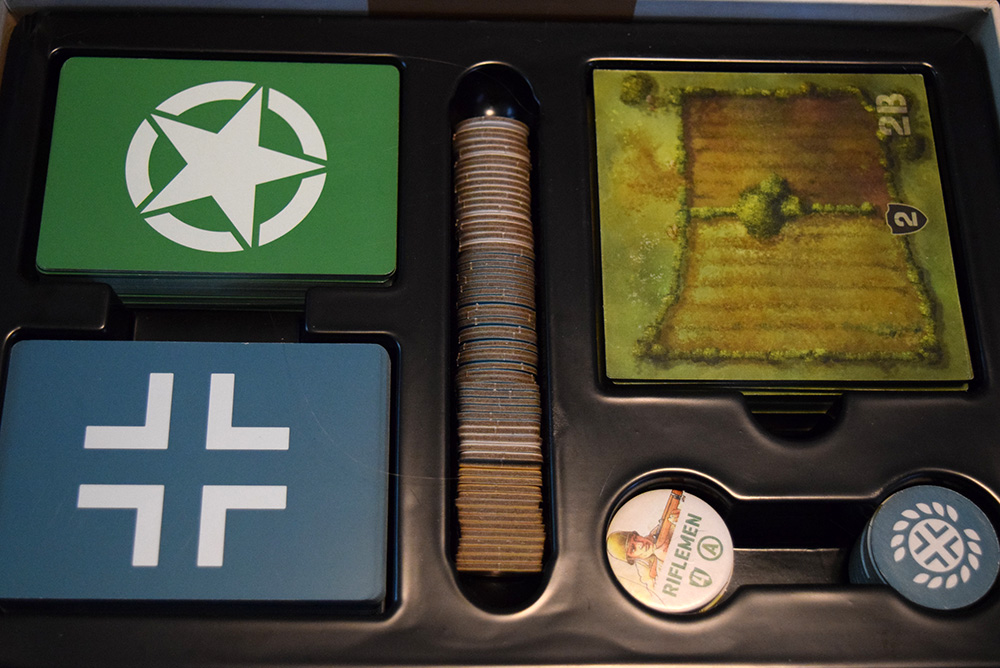 That said, Undaunted: Normandy did many things right, and while it definitely had an uphill struggle with us, in the end, we did enjoy it for precisely what it was, surprising us both at how smoothly it played and how accessible it was.  Though it’s ultimately not our sort of game, Undaunted: Normandy did more to invite us into its genre and mechanics than tons of other titles, and we firmly believe that for the right players, it will be a fantastic addition to your 2-player library.