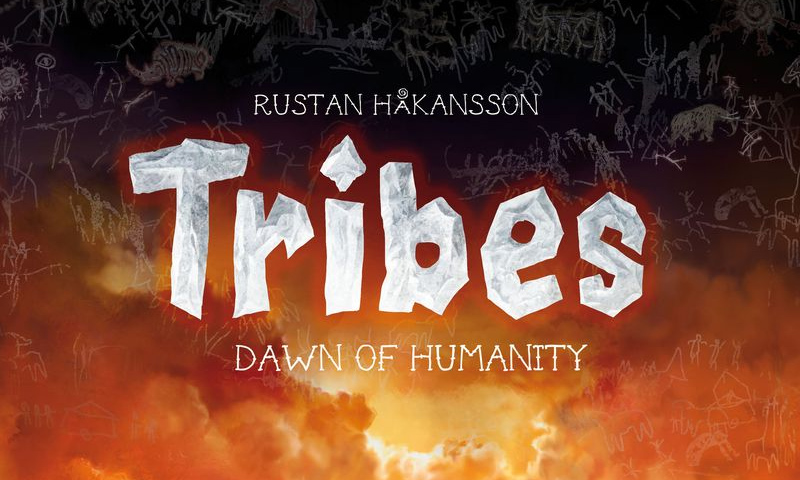 Tribes: Dawn of Humanity streamlines the whole 'civilization building' theme, combining a clever action selection mechanism with straightforward resource-management mechanics to deliver an experience that is more of a 'civ-themed' race for points than anything else.

The design of Tribes: Dawn of Humanity seeks to do something fairly extraordinary – pack a ‘civilization building’ experience int a tight 30-45 minute package.  In order to accomplish this feat, it delivers simple resource-gathering, smooth engine building, and a really clever action-selection mechanism to keep the flow of the game moving.  Does it succeed?  Well, let’s take a closer look and find out! 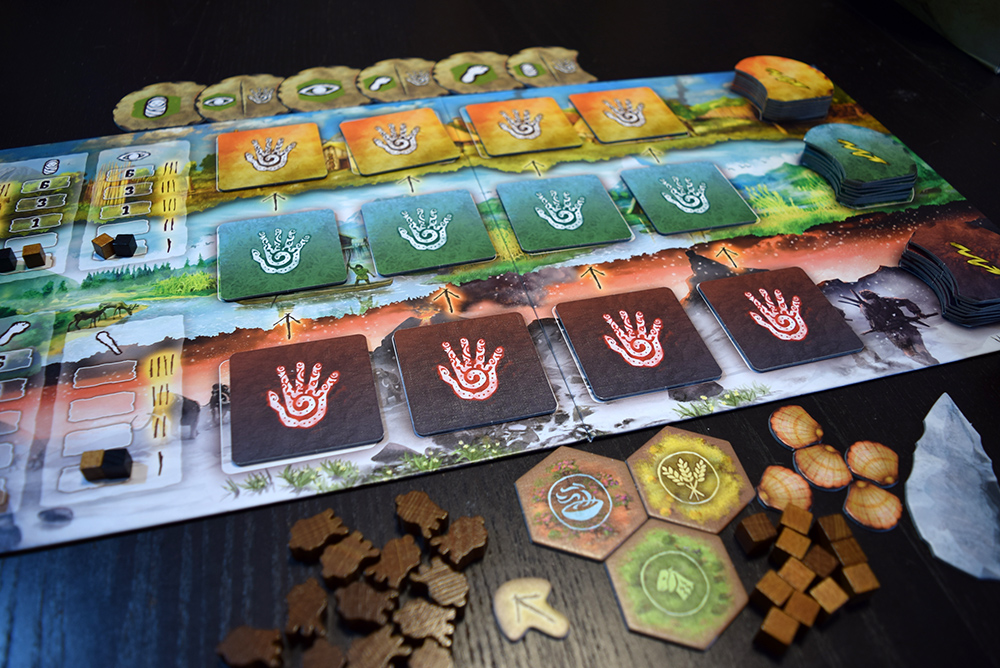 We received a review copy of Tribes: Dawn of Humanity.  We weren’t otherwise compensated.

So, when someone says ‘civilization-building’ game, most people likely picture vast tech trees, increasingly complex military clashes, and probably eventually needing to deal with some guy in a toga who wants to trade grain for your clay or something.  Blissfully, Tribes: Dawn of Humanity chooses to focus on the early days of human civilization, when net fishing was considered high tech and togas were a long way off.  This choice is very much in line with the goal of streamlining the gameplay experience, and has the added benefit of keeping things thematically unified – you won’t have one player developing advanced zen philosophy in the Bronze Age while another is leading a nation of illiterate barbarians who somehow figured out how to drop a nuke on your capital city.

Andrew: I don’t want to talk about it. 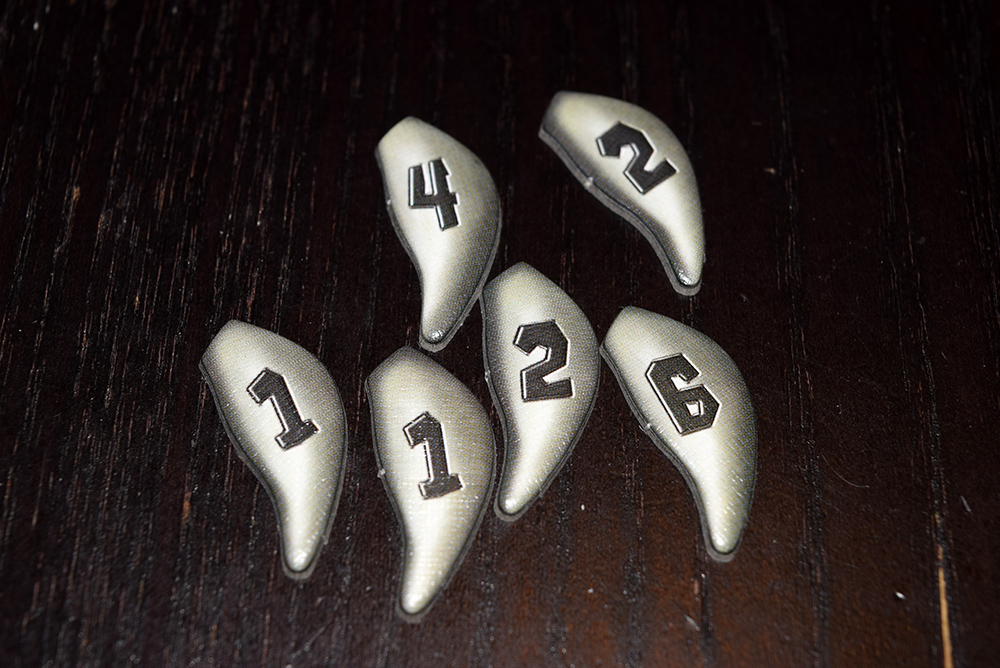 Each tribe’s goal is to have the most points by the end of the game, and will do so by developing achievements, claiming resources, and improving their tribe’s capacity in the 4 key pillars of human development: 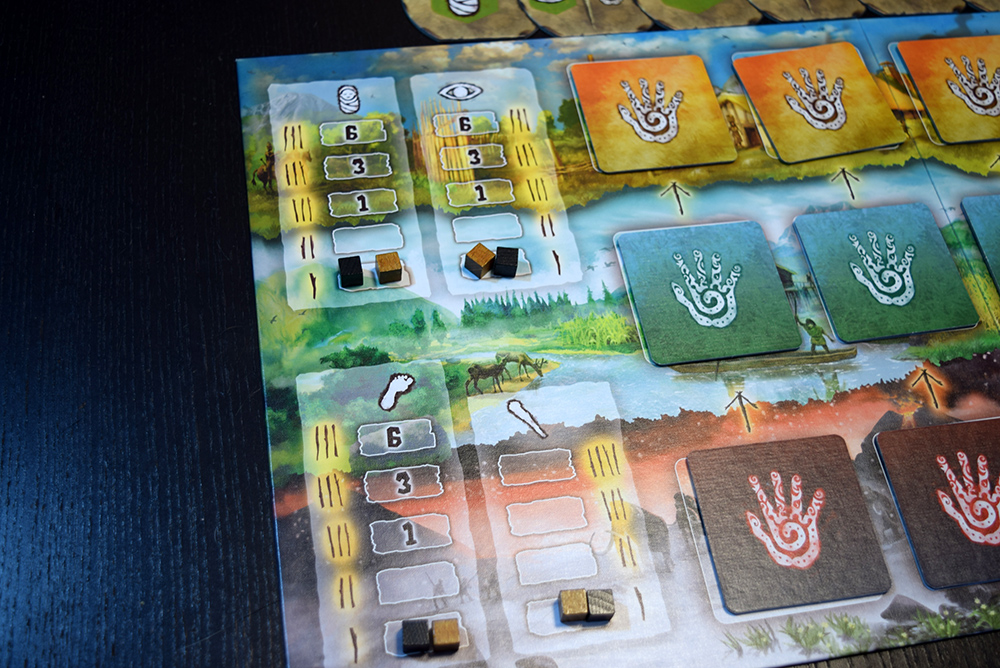 Jess: I think it’s really interesting that each player gets their own plot of land to expand and explore – I was really expecting to compete with other players for resources.

Andrew: That’s another streamlining mechanism, right there.  Instead of fighting over who gets some goats or whatever, Tribes: Dawn of Humanity is more of a race, which each player striving to secure achievements faster than their opponents. 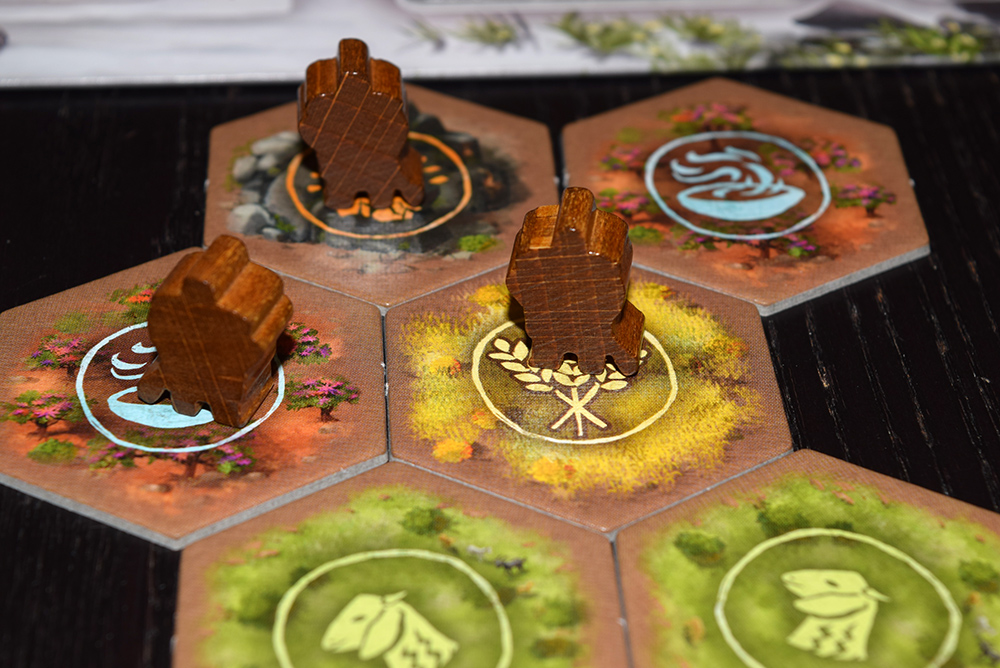 Achievements are the key to scoring big in Tribes: Dawn of Humanity, and claiming them is as simple as having your tribe control land tiles that match the requirements on an achievement tile.  You can then take the Achievement action to claim it. 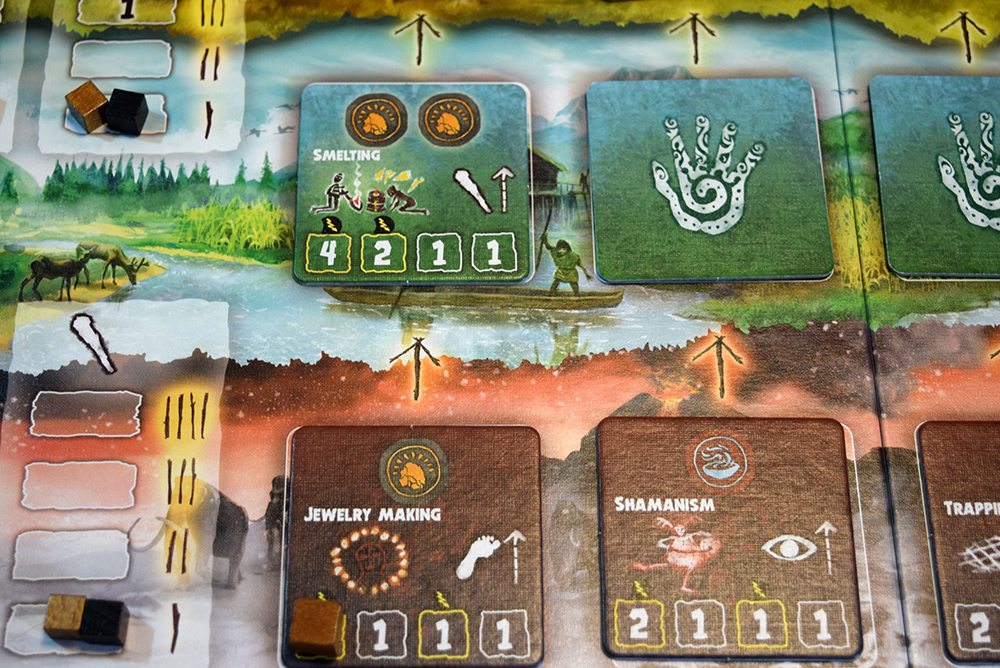 Achievements are divided into 3 groups, with simpler tiles opening the way to unlocking more complex (and more valuable) ones – scoring achievement tiles gains you both points and an increase in one of your tribes attributes, which in turn multiply the effect of the actions you select. 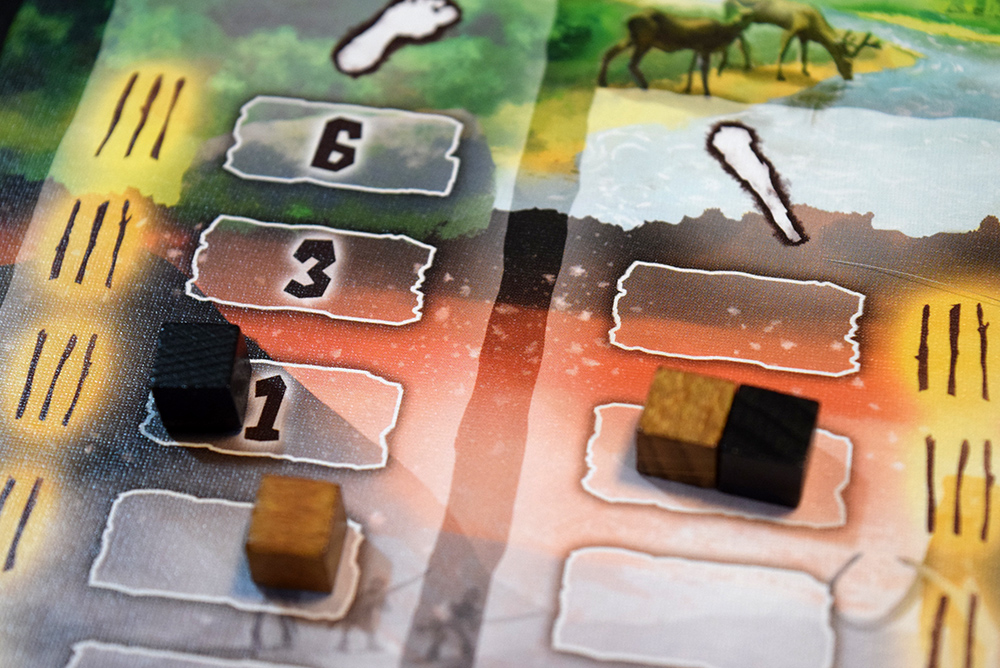 The mechanism by which you select your action though, that’s the hook that brings Tribes: Dawn of Humanity together.  The action tiles form a row at the top of the game space, and you can either take the leftmost action, or you can pay in shells to skip over actions in order to claim the one you want.  Paid shells get placed on actions, and players get all the shells left on actions they take.  And once an action is taken, it moves to the rightmost side of the line, only working its way back to the left as the intervening actions are taken. 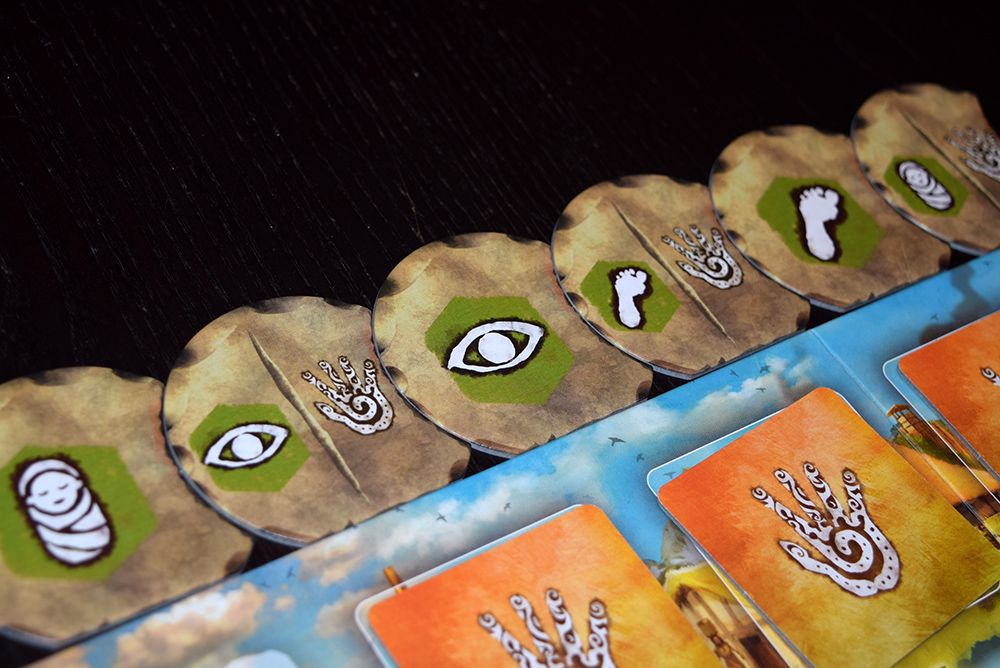 Andrew: And this is brilliant, because it means that you can’t just take the same action over and over again.  Well, you might be able to take it more than one turn in a row, but you probably have to pay shells to do so, and you won’t always have those resources at your disposal.

Jess: Yep! And because of that, you have to be a willing to adapt on the fly to whatever actions you have access to.  I really like that sort of challenge, especially since the number of shells in the game is fixed – players pass them back and forth as they skip and claim action tiles, but it’s a closed economy, and you’ve got to plan around that. 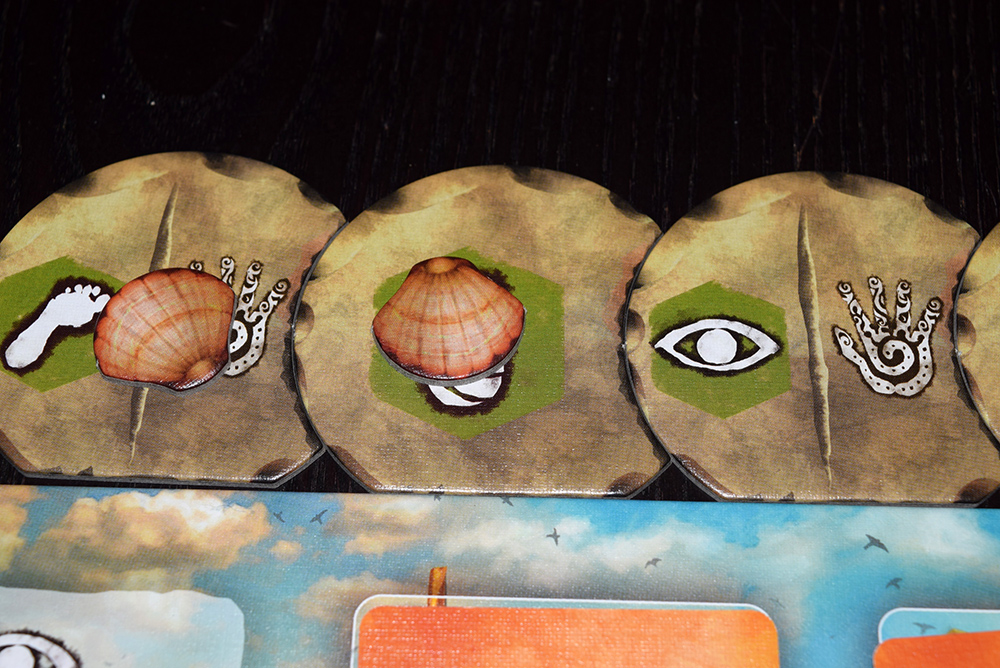 Another clever use of the action row is how ‘event’ tiles work.  As players score achievements, event tiles will get added to the action row.  When claimed, they will trigger a variety of effects, some good, some bad, which will tend to shift the tide of the game in various ways.  Many events check the relative strength of tribes, so it pays to avoid triggering many of them unless your tribe is in a strong position.

And how does one avoid triggering an event?  You pay shells to skip it, just like action tiles.  Of course, every shell you spend to avoid an event will end up in the hands of the player who eventually triggers it. 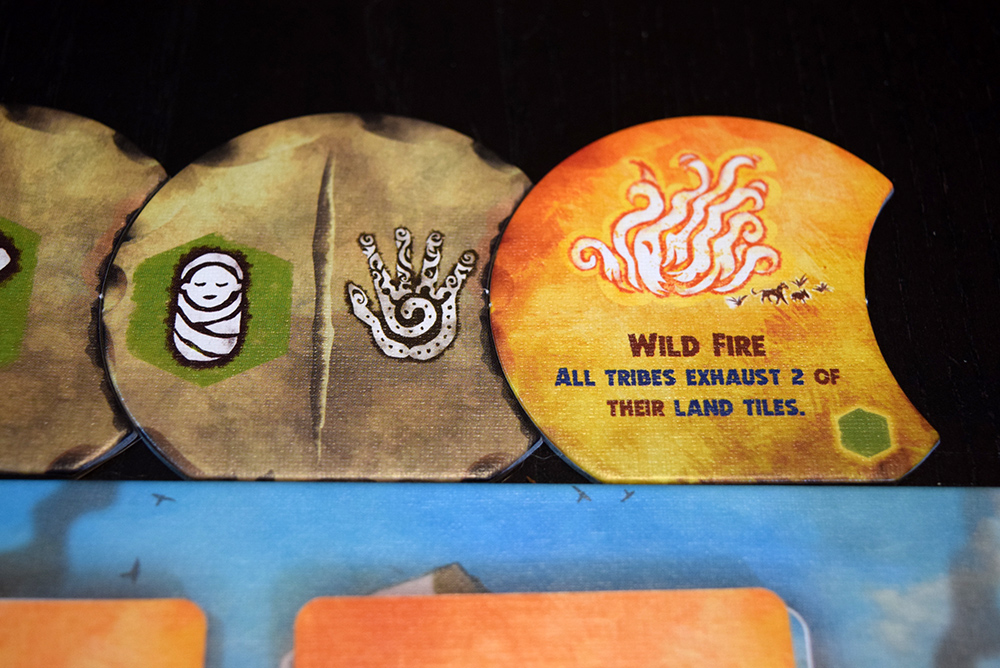 Jess: So, I liked Tribes: Dawn of Humanity well enough, but I have to say there was something about its cadence that didn’t quite work for me.  I had this constant feeling of being just slightly behind no matter what I did – it wasn’t that I wasn’t completing achievements, but since, like you said, Tribes: Dawn of Humanity is more of a race than it seems, the random draw of land tiles could be the difference between easily chaining achievements together or being left to scrabble across the board, desperate to find that one extra horse you need.

Andrew: I do get what you’re saying.  For me, I think my least favorite part of the design is how the game end is triggered by a set number of late-game events.  That tends to mean that the player who is scoring the highest value achievements is also ushering the game to a close.  Effective, as mechanisms that make the game more streamlined go, but there is no catch-up mechanism to speak of, and with a few lucky achievement chains, yeah, it can feel like a little bit of a runaway. 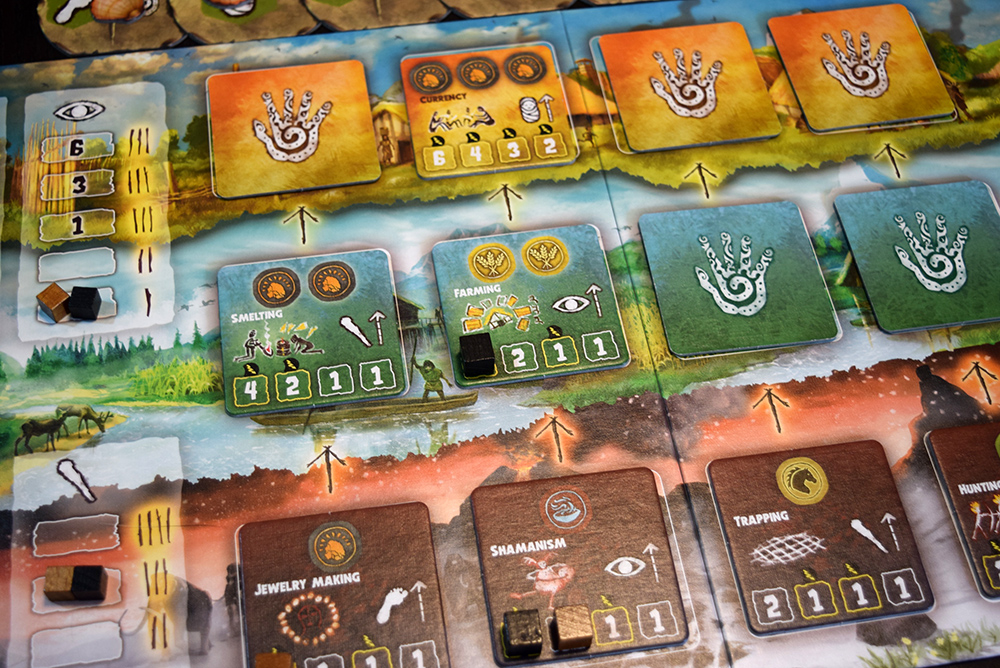 The chains of achievements themselves are another somewhat strange note in the game’s design.  While at the beginning of the review, I might have poked fun of civ games with huge tech trees, Tribes: Dawn of Humanity’s achievements are really just abstract sets of resource requirements.  While they do get progressively more difficult, they are randomly sorted into vertical groups, and that means that jewelry making might lead you to farming which leads to philosophy.

Jess: Yeah, that little oddity just drives the point home that Tribes: Dawn of Humanity is civ ‘themed’ more than it is a ‘civilization building’ game.

Andrew: Absolutely, yeah.  But once you meet it there, then I also found it to be pretty fun.  I liked the simplified mechanics and straightforward gameplay, and, yes, the reasonable time commitment.

Jess: Those things are definitely normally selling points, but somehow Tribes: Dawn of Humanity didn’t quite land for me.  I didn’t hate it, not by a long shot, but I also didn’t have a particularly good time with it.  I guess it’s just that I love games where you get to build something, and at the end of the day, Tribes: Dawn of Humanity never actually let me feel like I was doing that.  For all its cleverness, and parts of it were definitely clever, this one just sort of missed me.

Andrew: I think I see your point completely, and from that lens, yeah, I can understand how you’d have a lukewarm response.  For me, there was some real cleverness in the action selection core mechanics and I didn’t need the game to be anything other than it was, so I had a fine time with it.  But your point is well taken.