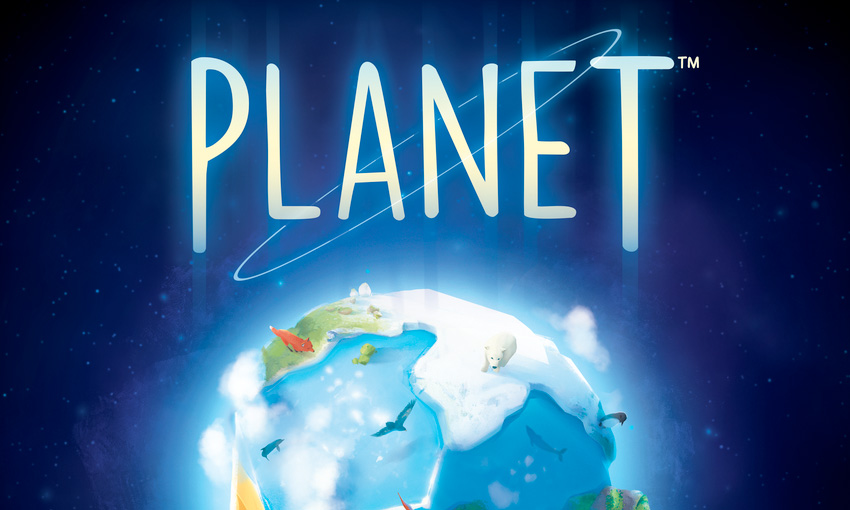 Planet manages to somehow deliver both an easy-to-engage family-level game and a (slightly) thinky strategic experience at the same time, all wrapped around some extremely clever component design.

The first time we saw Planet, we immediately wanted to check it out.  I mean, how could you not?  One look at that colorful dodecahedron, resplendent in its various terrain types, and we were instantly curious about what sort of game would take advantage of such a cleverly designed personal play-space.  And most critically, would the game be engaging and fun?  Or was the material design nothing more than a visual gimmick? 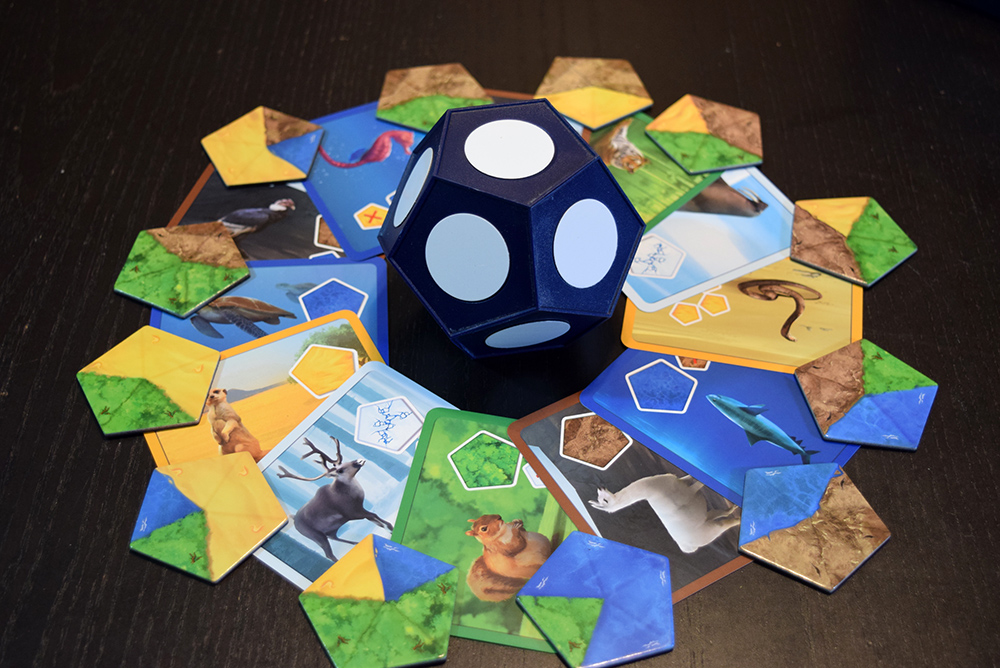 We received a review copy of Planet.

Jess: Well, let’s just address that last part right up front – Planet is definitely a fun game, and the component design isn’t just for show – it actually makes a gameplay difference, and looks awesome, too!

Planet is played out over the course of 12 rounds, and on each round players will draft continent tiles to be added to their planet core.  Each continent piece has 5 ‘areas’ – single-triangle segments in one of 5 different terrain types.  As you add continents to your planet, you will look to create regions of terrain – multiple areas of the same habitat which touch each other (regardless of whether the are on the same continent tile or not). 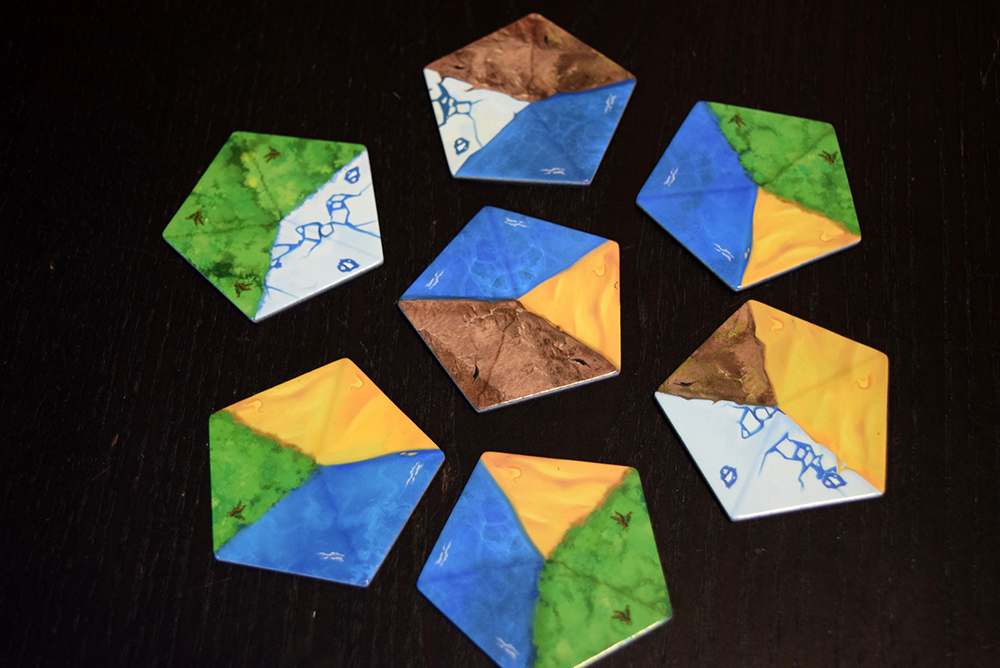 Each player has a secret ‘Natural Habitat’ card, which will let them score points based on how much of their planet is covered in that biome.

The core and continents magnetically fit together, and once a drafted continent piece is added, it cannot be moved for the rest of the game.  The 3-dimensional nature of each player’s ‘board’ makes for much more interesting adjacency calculations, which is critical to earning points. 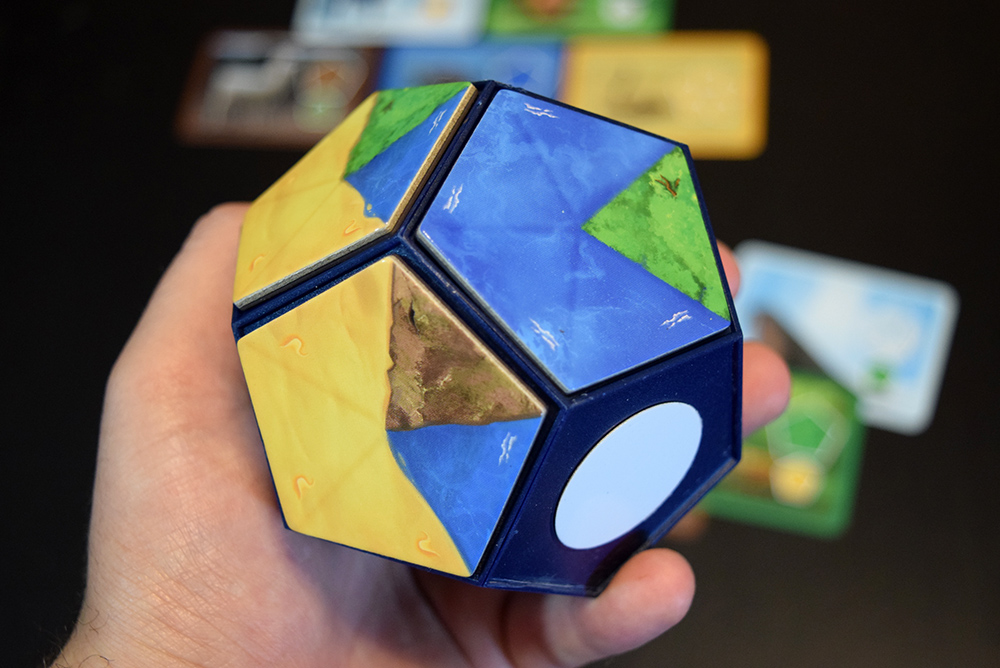 And that’s because, starting with the 3rd round, animal life will begin to evolve on planets with the right composition.  Each round will feature a few animals which have specific rules for what planet they will evolve on.  Some examples are: the planet with the largest arctic region not touching a desert or the planet with the most ocean regions.  All animal cards are comparative, so you’ll want to at least nominally keep track of what your opponents are doing in order to make sure you can earn the cards you want to score. 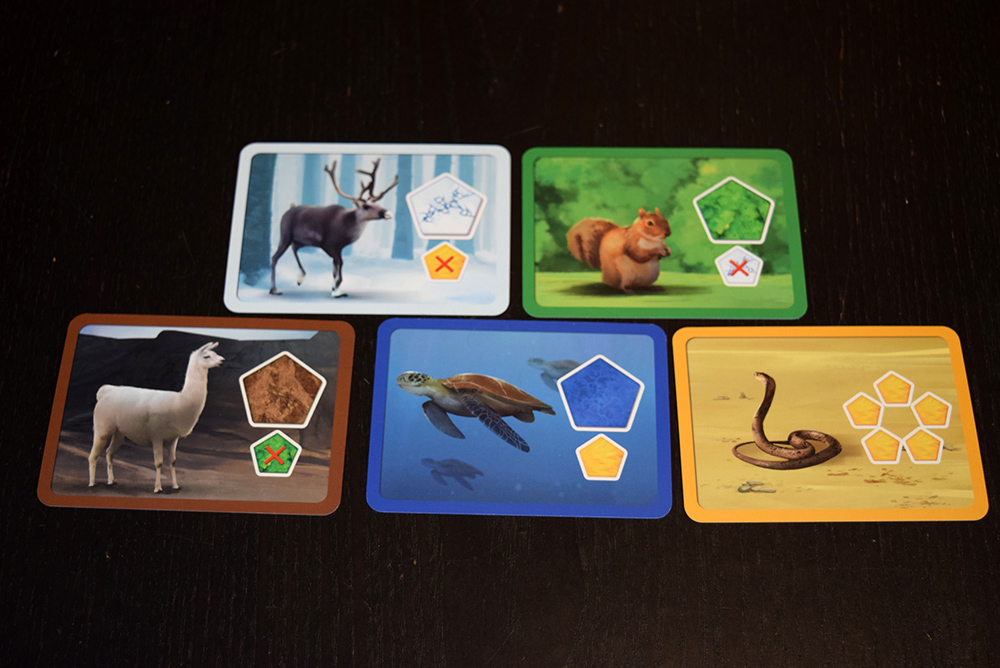 Andrew: Being the player who claims animal cards is critical, because you can earn a lot of points by doing so – each animal you evolve that matches your Natural Habitat is worth a point at the end of the game.

Jess: But animals you evolve that don’t match your Natural Habitat are worth double!  So if you’re having a tough time drafting continents that match your home biome, then you can reasonably try to switch tactics and just go for a pile of animals to score you points. 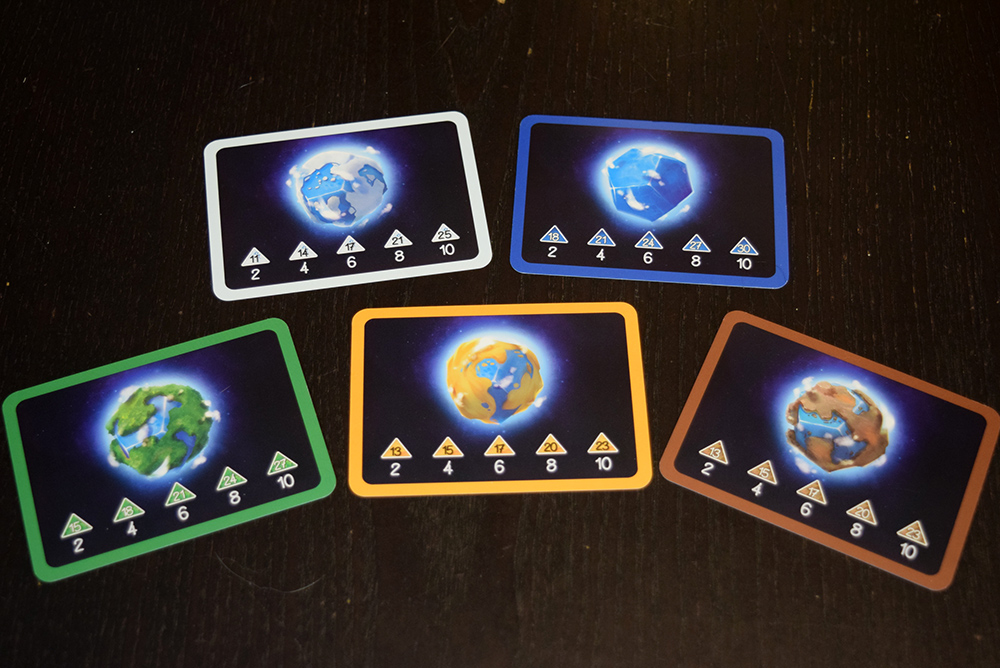 But critically to all of this is a degree of planning.  Players won’t know what tiles are going to be available to draft each round, but the animals are face-up for all to see.  And since Planet features this unique sort of comparative area majority, you’ll definitely want to plan ahead, crafting your planet with future scoring opportunities in mind. 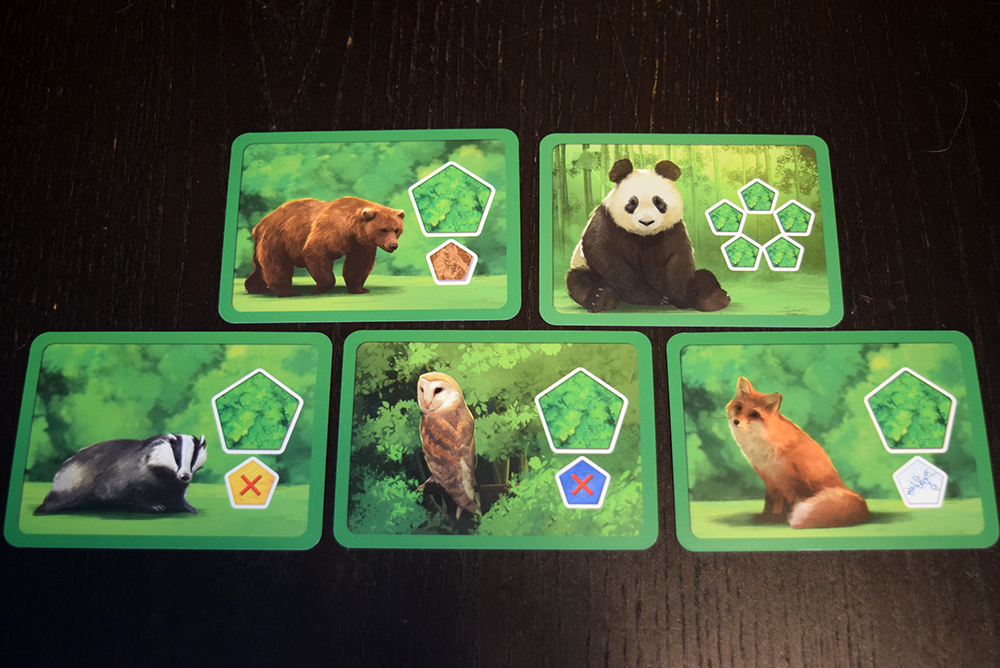 Andrew: And that’s how Planet manages to somehow be both family-friendly and a little strategic all at the same time.  The rules are really pretty simple to engage – you draft a single continent piece every round and slap it on your planet.  But if you want those animals, you’re going to need to plan ahead to make sure you’re best positioned to meet whatever their criteria is. 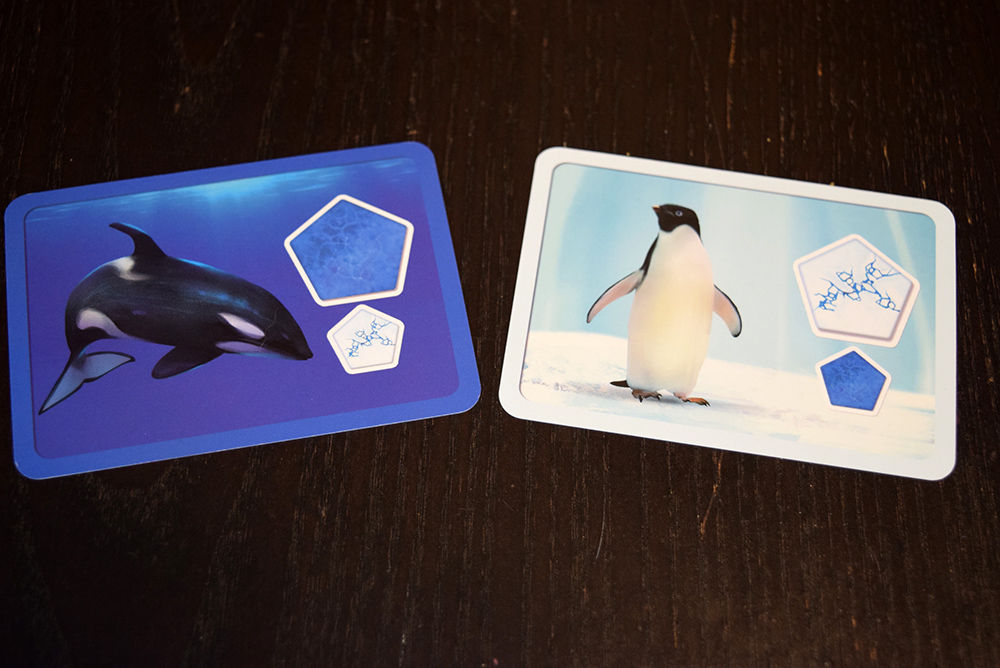 Jess: Yep!  And I can’t tell you how many times, late in the game, you will likely find yourself turning your planet over and over in your hands, trying to figure out how to squeeze in just one more forest or how to keep your mountains from touching the ocean or whatever.  Despite how colorful and almost toy-ish Planet looks, it actually has a neat bit of strategy in its gameplay.

Andrew: I have to say, that really surprised me, though I guess it shouldn’t have, considering publisher Blue Orange’s track record.  But what surprised me even more was how functional and integral the planet core itself is – strictly speaking, it’s just a tile-laying game, but for the purpose of visualizing adjacency, the 3-dimensional board is just awesome. 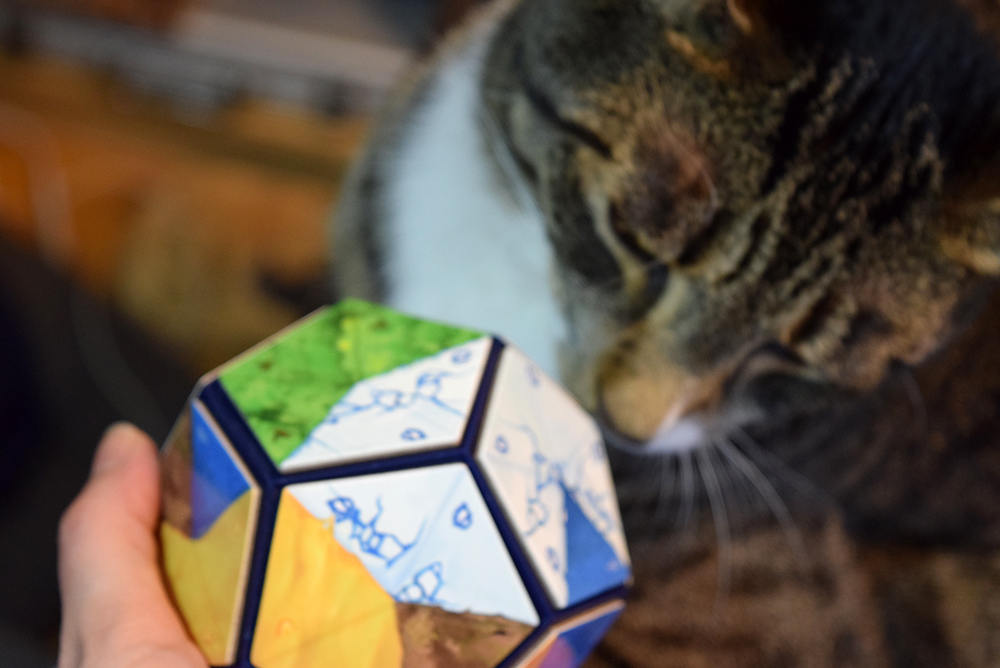 While Planet isn’t a complex game, it’s definitely not mindless, and players who plan ahead on how to win animals will be at a distinct advantage.  That said, you can still earn a huge pile of points by leaning hard into your Natural Habitat card, so there is a balance to be had between those strategies.  Overall we had a great time with Planet, and while we feel its unique appearance will be a major selling point, the fact is that there’s a real game in here, which we think a wide variety of players could enjoy!