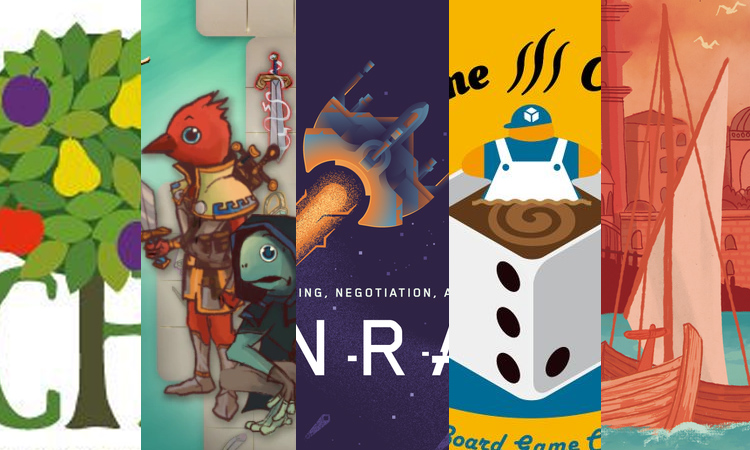 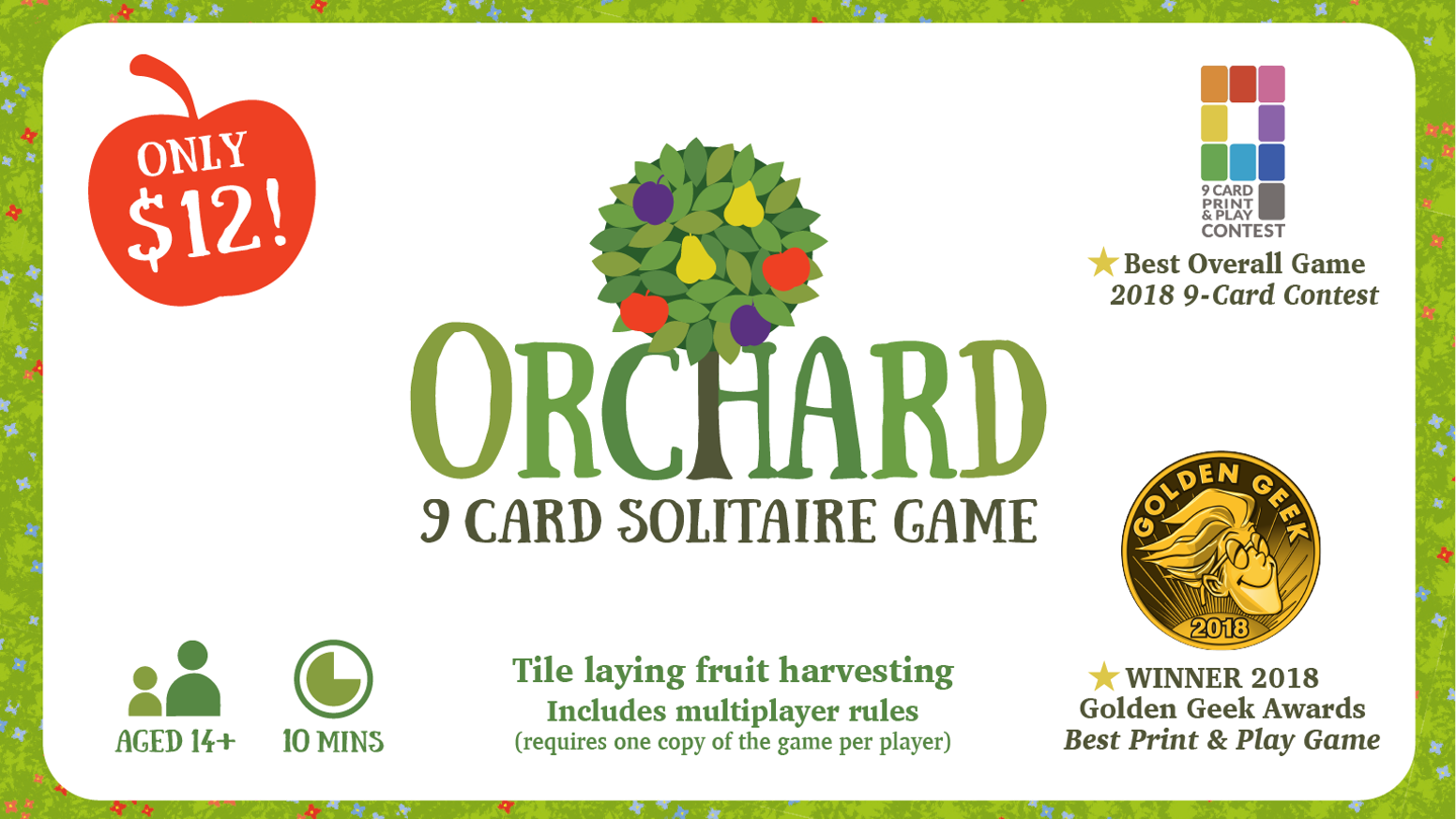 Solitaire games are a hard sell for me. If I’m going to play a game by myself, I usually opt for a video game, but give me a solitaire game that is quick and puzzley and I’m more likely to try it. Orchard is just that. Playable in under 10 minutes, Orchard is a tile-laying style game about harvesting fruit. You build your orchard by placing tree cards. Any trees that overlap with matching fruit are harvested so figuring out where best to place each card is the strategy of the game. 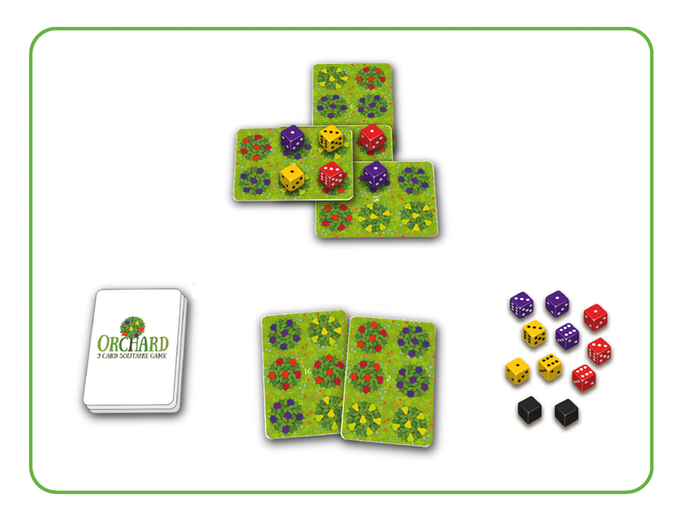 The first time you overlap a tree with matching fruit you will place a matching fruit die with the 1 face-up. Every subsequent time you overlap that fruit the die will rotate, increasing your harvest points. With only 18 cards (you play with 9 at a time), Orchard looks like a fun puzzle to unlock. You can learn more on the game’s Kickstarter page here. 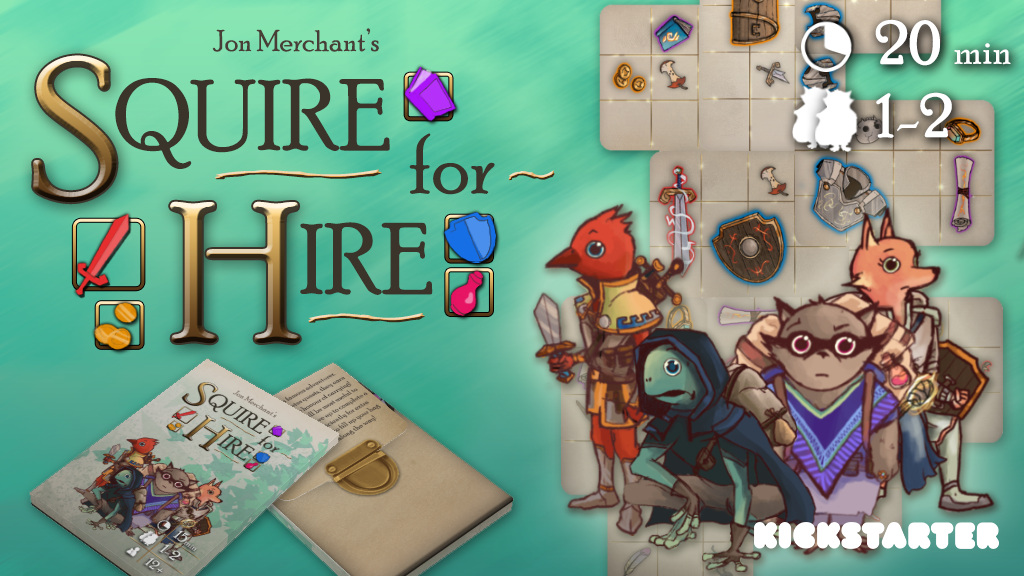 Squire for Hire is another 18 card, tile-laying game, but this time we’re dungeon delving… kinda. Heroes do the actual delving and, as their squires, the players do the carrying of the loot. Every turn two item cards will be placed face-up next to a story card. The story card has requirements which, if met, will allow a player to take one of the item cards and organize them in their backpack. what you choose to store and what you choose to cover up is just as important as trying to figure out where you can place it as the item cards are what allow you to complete a story.

As an inventory management game, Squire for Hire looks cute, small, and a little puzzley. I really like the theme of the game and the fact that it can easily fit in a pocket; perfect for on the go gaming. Learn more about Squire for Hire on Kickstarter here. 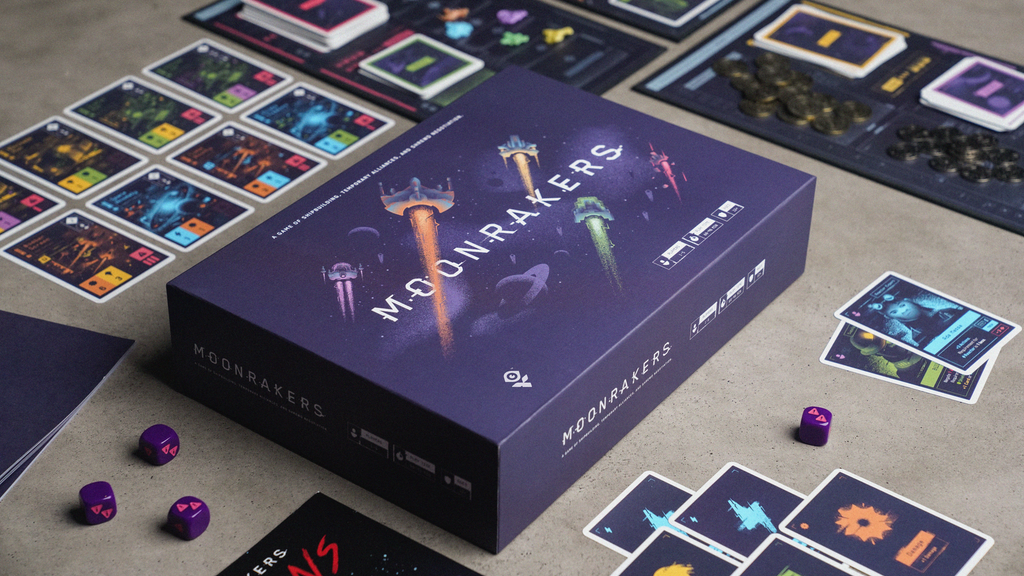 As a loosely formed alliance, the players of Moonrakers will be plotting against each other in an effort to become the next of Leader of the outlawed group. Moonrakers is a deck-building gameabout building ships, completing contracts, and negotiating your way through a social minefield.The main thrust of the game comes from the negotiations. Contracts give big rewards and players can choose to attempt to complete them alone of by forming allies with other players. Once the players come to terms they will play action cards to fulfill the contract. So-called allies can betray one another so trust will be a hot commodity in the game. 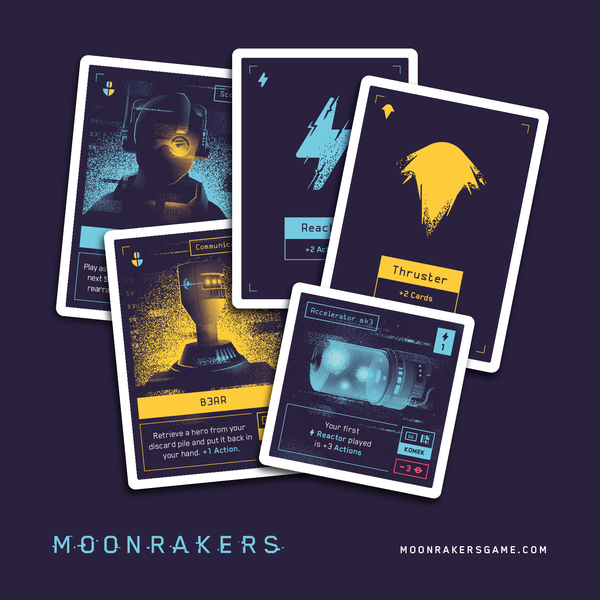 The art design really pulled me in on this game. The colorful graphics remind me of retro travel posters from the 1950’s. I like that there are options for players to take on contracts themselves even though it’s most likely beneficial to ask for help. I find that negotiation games break down if you don’t have that option as players can ostracize an individual by refusing to negotiate with them and that plain sucks. Moonrakers is a highly polished cross between social games and deckbuilding. Check it out on Kickstarter here to learn more. 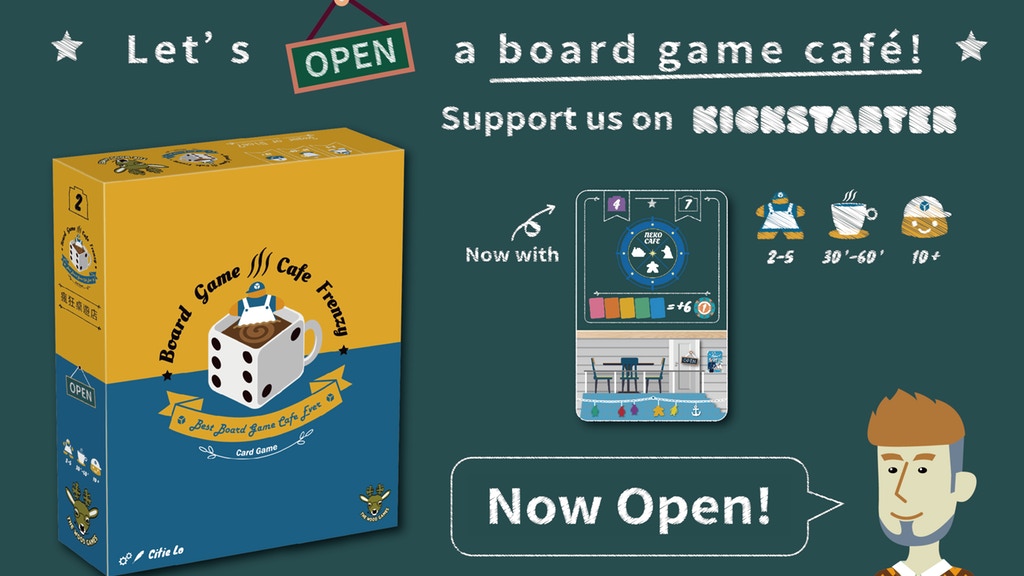 Board games about cafes? Cafes about board games? Why not both? Board Game Cafe Frenzy is a trick-taking, card-drafting, tableau-building, worker placement, set collection game about running your own game cafe. 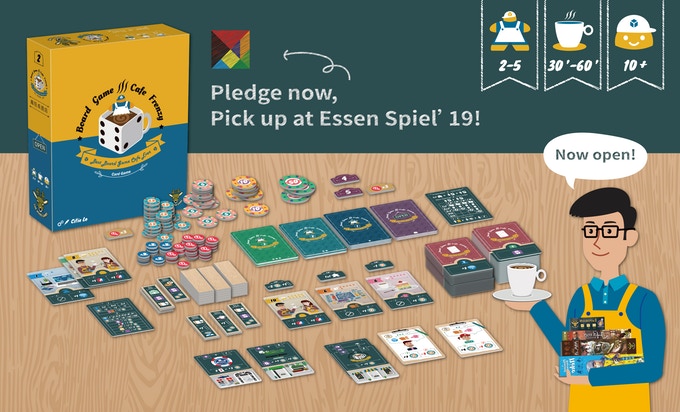 Players will need to prepare their store each round by buying cards from the market that will provide them with Wifi, Meals, and Games. Afterwards their stores will open and players will play cards from their hands trick-taking style (playing successively higher numbers that those previously played). Points are scored for WIFI points, completing customer’s orders, remaining action discs, and more. Whoever has the most points is the winner. Board Game Cafe Frenzy looks like it packs in a whole lotta game while still being pretty accessible. Visit Board Game Cafe Frenzy on Kickstarter here for more info. 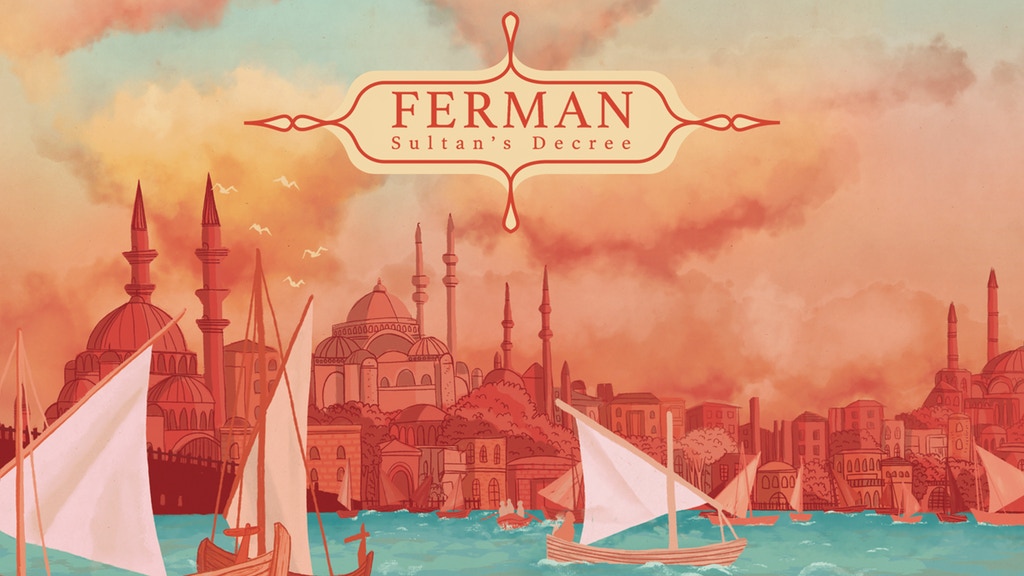 It’s time to restore Constantinople to its former glory.  In Ferman: Sultan’s Decree, the Sultan has tasked the merchants of the city with building up the infrastructure and completing tasks for the people. By placing their workers, players can collect resources and trade them at the docks, sell them at the market, or use them to complete quests. 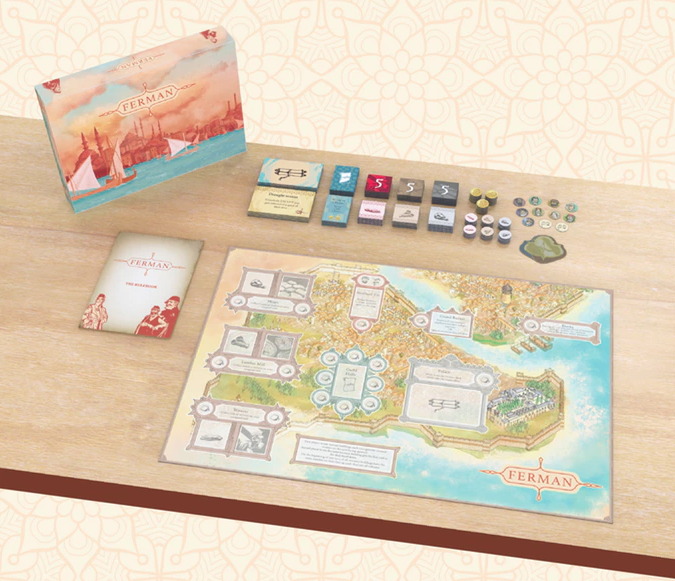 During the game players can also pick up Ferman cards, which are one time use cards that have effects such as giving the players resources or causing players to lose coins. Once any player earns 11 coins the game goes into its final round and at the end, whoever has the most coins wins the game. Ferman: Sultan’s Decree looks like a fun economic/worker-placement game with a gorgeous color palette. Check it out on Kickstarter here.