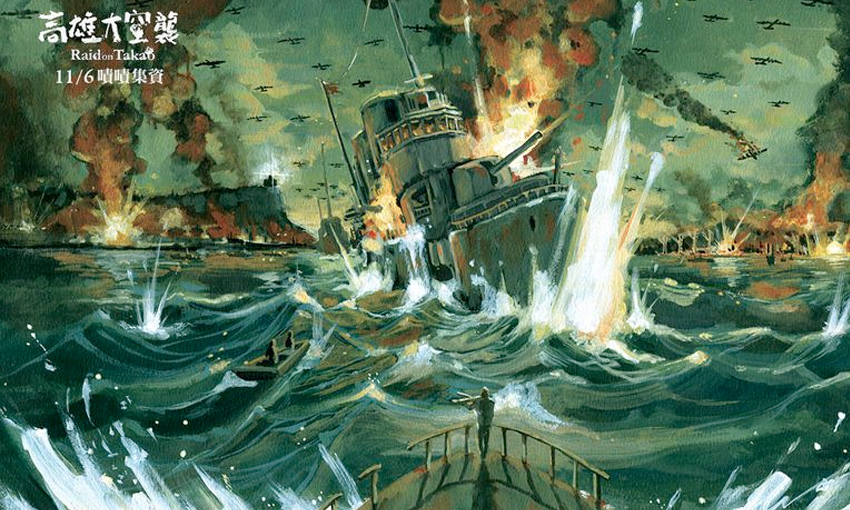 Raid on Takao is a fully cooperative game of individuals striving to survive the horrific conditions of the titular city as it suffers titanic air raids during World War II.  You will need to work together to endure, but tragedy will beset you at every turn.

Andrew
Raid on Takao is something of a brutal game.  Set during a period of intense U.S. bombing during World War II, the players take on the roles of a handful of lost souls, searching for a way to not only survive the violence falling from the sky over their beloved city, but to face down the demons of their own failings, losses, and regrets, as the despair of the war threatens to wipe away both life and hope.

Jess
Not exactly a light subject.  Raid on Takao is tough, man.

Andrew
Absolutely, yeah.  But by working together, these folks stand a chance of coming through not just alive but healed.  Of course, the alternative is at least as likely, and the bombers just keep circling… 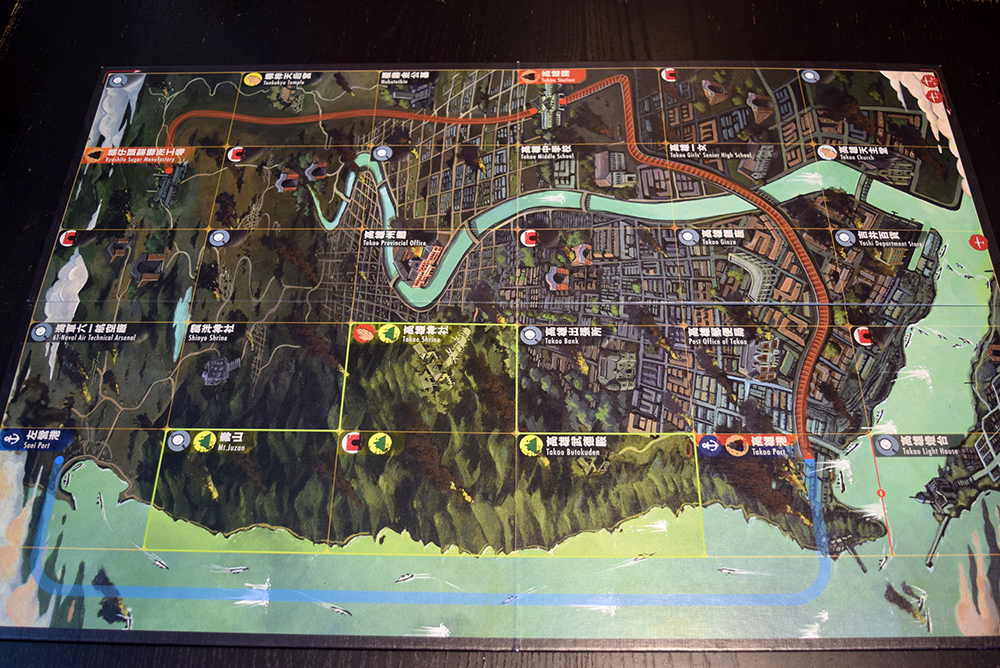 We received a review copy of Raid on Takao.  We weren’t otherwise compensated.

Now, we do want to step back from the theme of Raid on Takao, because it’s so potent that it threatens to dominate any conversation about the game, and for a moment focus on the mechanics.  Raid on Takao is a scenario-driven, fully cooperative game.  Each player will control a survivor in the city, each of whom has unique skills, goals, and emotional baggage.  Players will spend stamina points each turn to move about the city, search for supplies, clear rubble, and accomplish scenario-based goals. 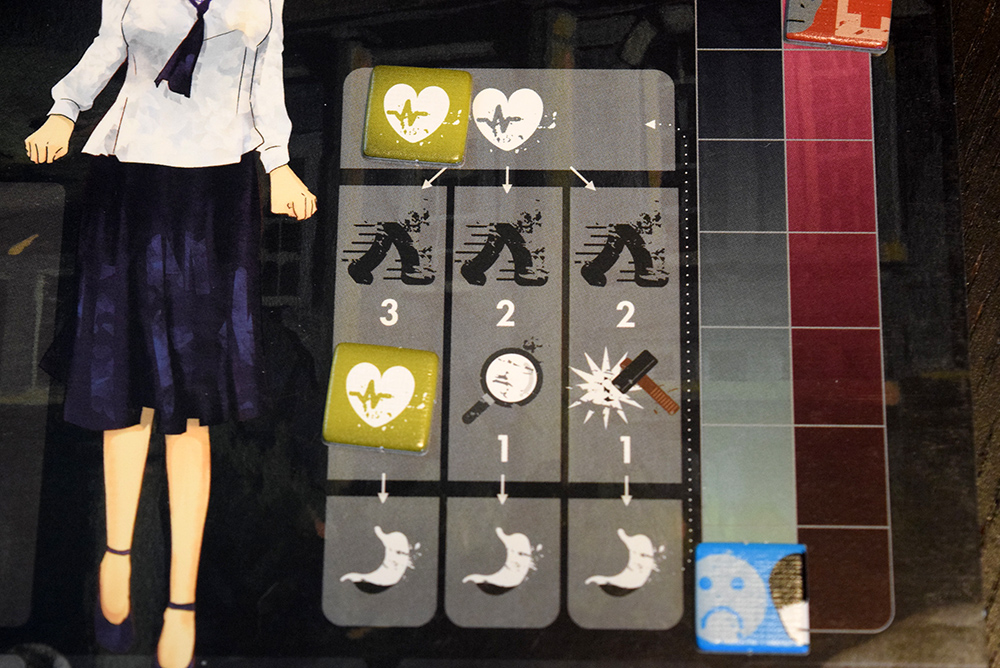 Each stamina point spent allows the players to take one of three actions – moving, moving and searching, or moving and clearing rubble.  Searching gets them gear and (hopefully) food, which is critical as the only ways to regain your spent stamina are to eat or to lower your own health.  Gear can help you overcome the challenges of the wrecked city or keep you nominally safer from danger, which is critical because should any character die, then everyone loses. 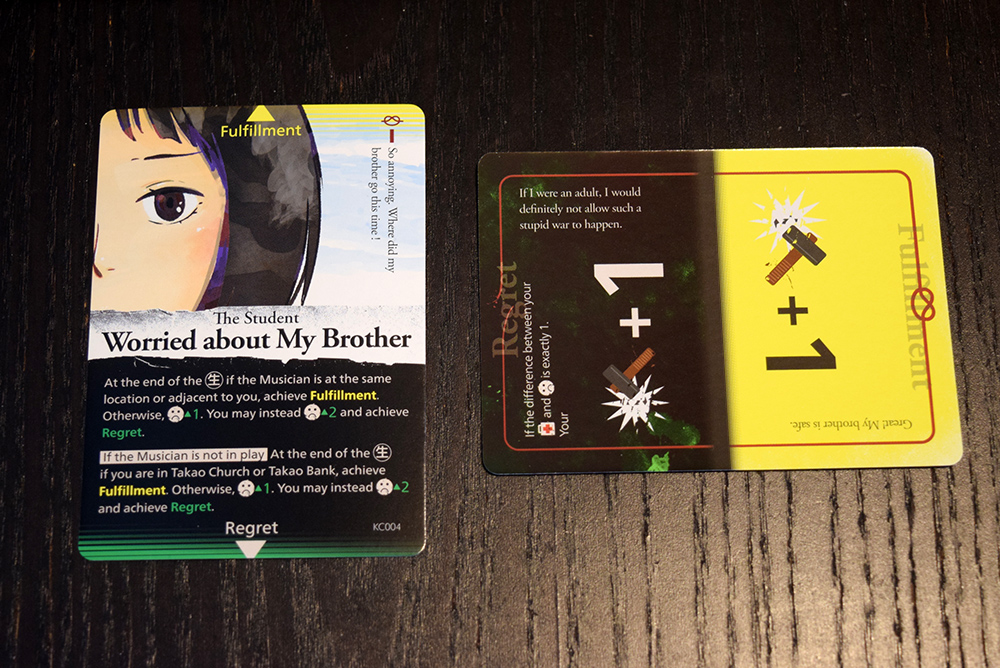 Jess
One of the really interesting things about Raid on Takao is how much story there is behind each character.  Rather than having generic survivors each of these folks has some personal history, documented both on personal objective cards as well as within the rule book.  Some characters have existing relationships, and their personal goals might involve each other, which is really cool. 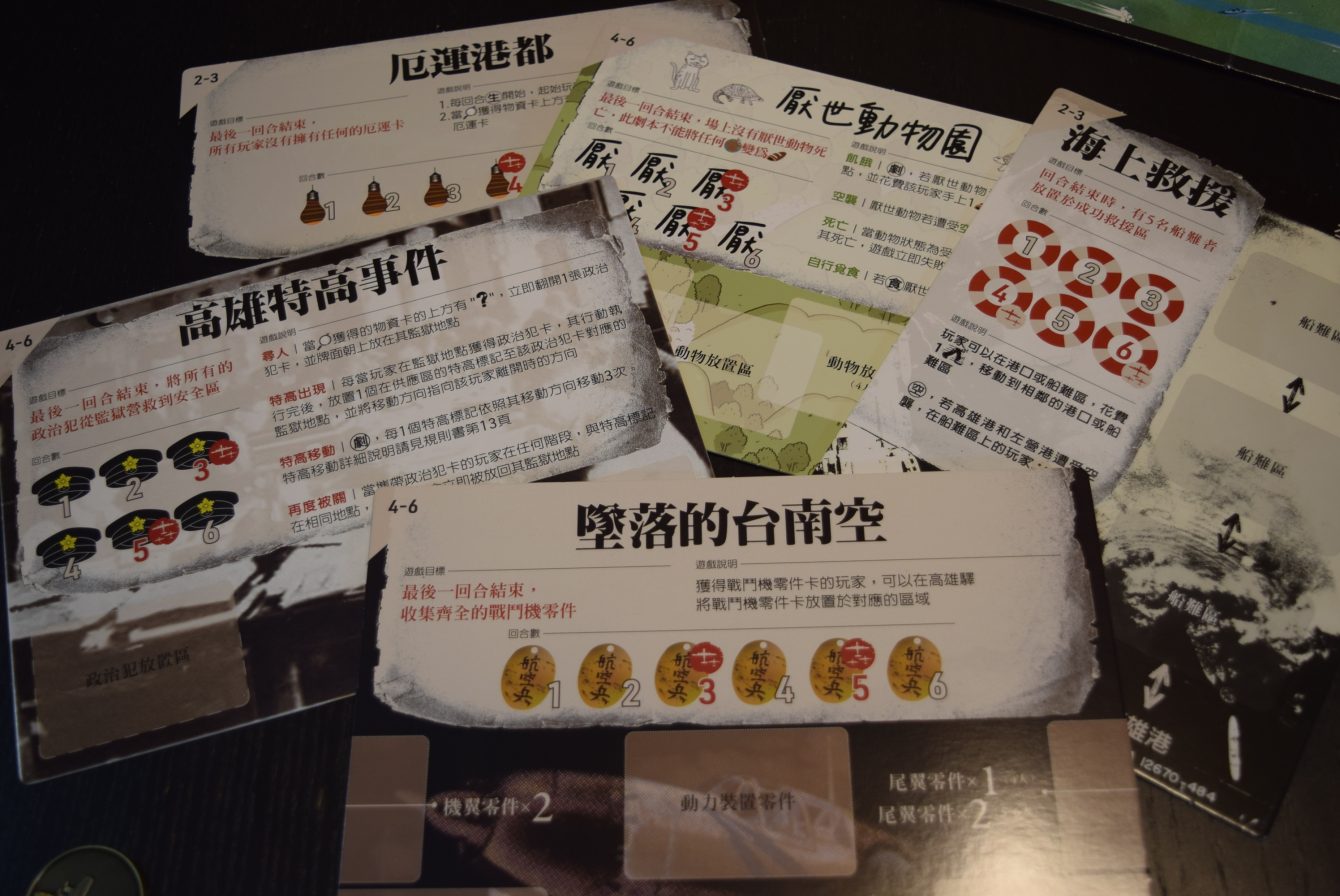 In addition to their personal goals, each game of Raid on Takao will follow one of several scenarios.  These present unique rules, challenges, and victory conditions for each play session.  One scenario might involve characters dealing with ever-mounting traumas caused by the horrors of the war.  Another might involve them trying to rescue lost zoo animals who might fall victim to the bombing.  No matter what scenario you play, though, you can be sure that it will focus on ever-increasing loss and threats, and it will always be a struggle to keep everyone alive.

Andrew
But not just alive – while your health drops when you take damage, your despair raises with each emotional trauma you suffer.  And if those two values ever meet, well, it’s game over. 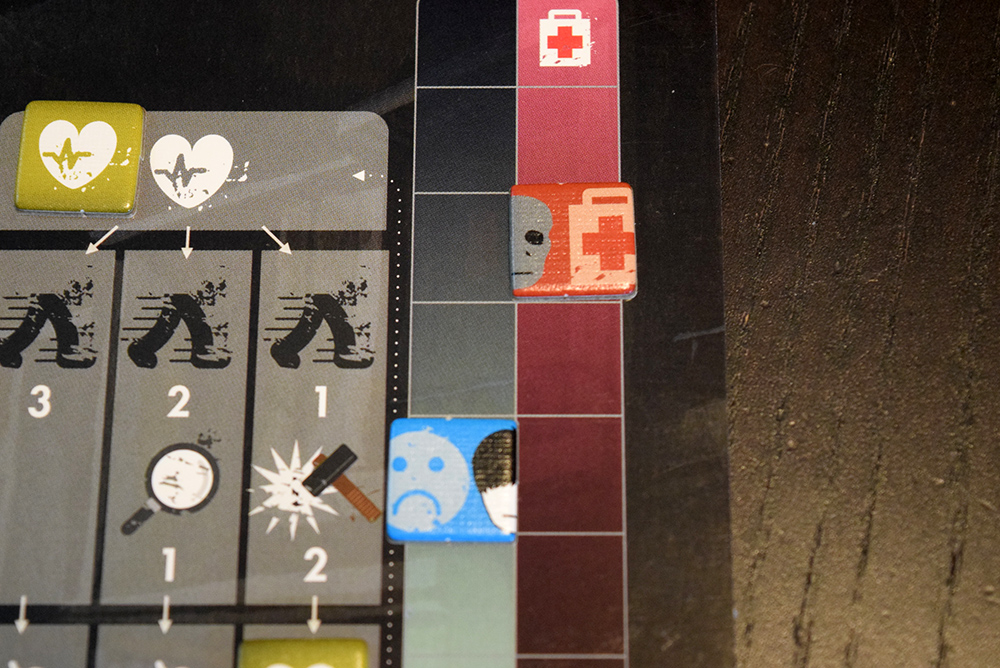 I meant it when I said Raid on Takao was a brutal game.  The theme is just heartbreaking, and the game pulls very few punches – everyone involved is suffering and bedraggled, and the exercise can end in an instant, as a character finds themselves in the path of an oncoming bomber and just can’t get out of the way in time. 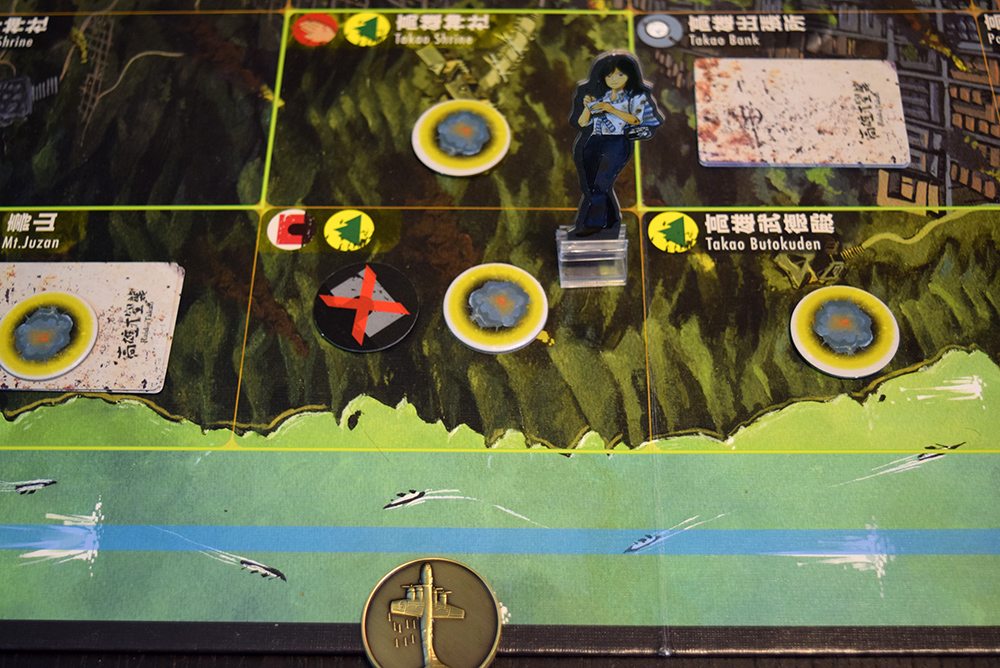 Jess
Honestly, I think the theme is important, because it heightens the tension of the game.  It really sets the stakes, and I liked that it put you in the shoes of very normal people who want very normal things in amidst this very horrible situation.  And the mechanics and theme sometimes get together to feel downright awful – in a good, gameplay-driven way, I mean. 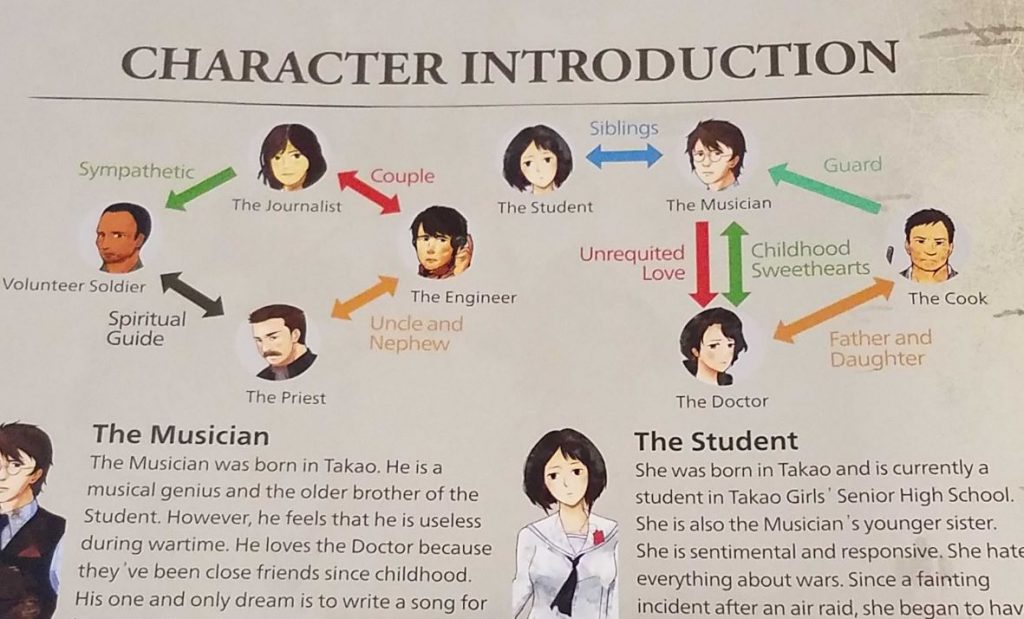 Andrew
I agree with you.  Mechanically, Raid on Takao does some pretty interesting things, all told.  The fact that each player has these mini-goals that they are trying to accomplish gives you more to think about than just ‘we need 4 food this round’ or whatever.  And if you can complete those objectives, you get a permanent little bonus, which gives you even more incentive to do them.

Jess
Of course, you can fail them, too, and you’ll still get some sort of bonus, but it won’t be nearly as good, and your despair levels will go up, putting you (and the game) in danger. 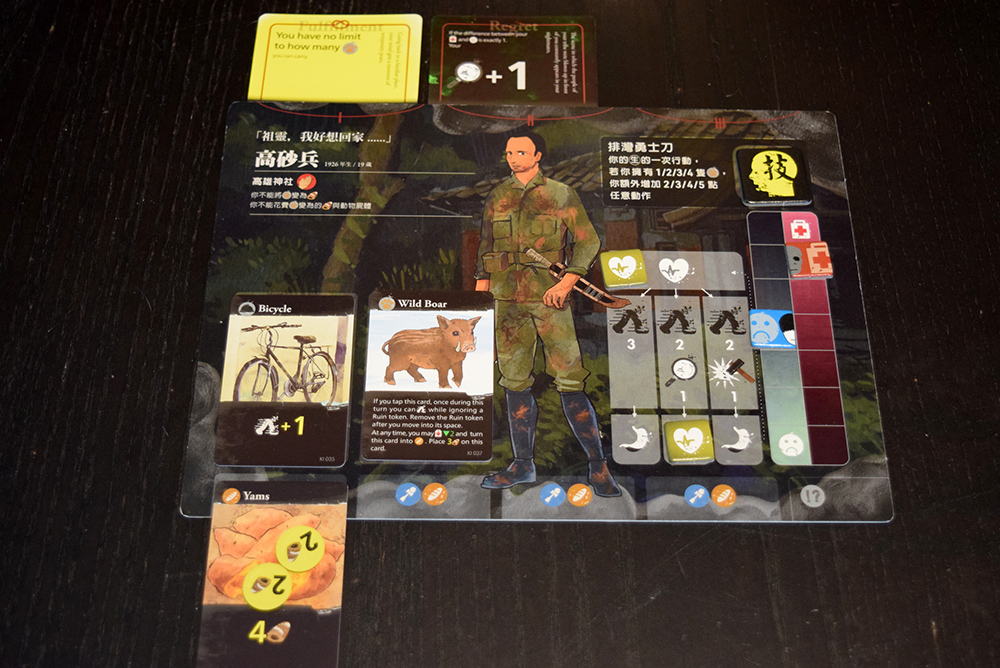 Actually, for as much as we liked the individual goals, they bring to light something of a weakness in Raid on Takao’s design.  Each character has 3 goals, and these goals don’t change from game to game.  That means that no matter what the scenario is, the Doctor will always want to go to one of two specific spaces on the board as soon as possible, or the Volunteer Soldier will need to make his way into the mountains eventually.  It’s a minor criticism, but this lack of variety sits oddly contrasted against the different scenarios in Raid on Takao.  On the other hand, the fact that there are 8 playable characters to combine with the various missions means that there is still plenty of variety to be found in the box. 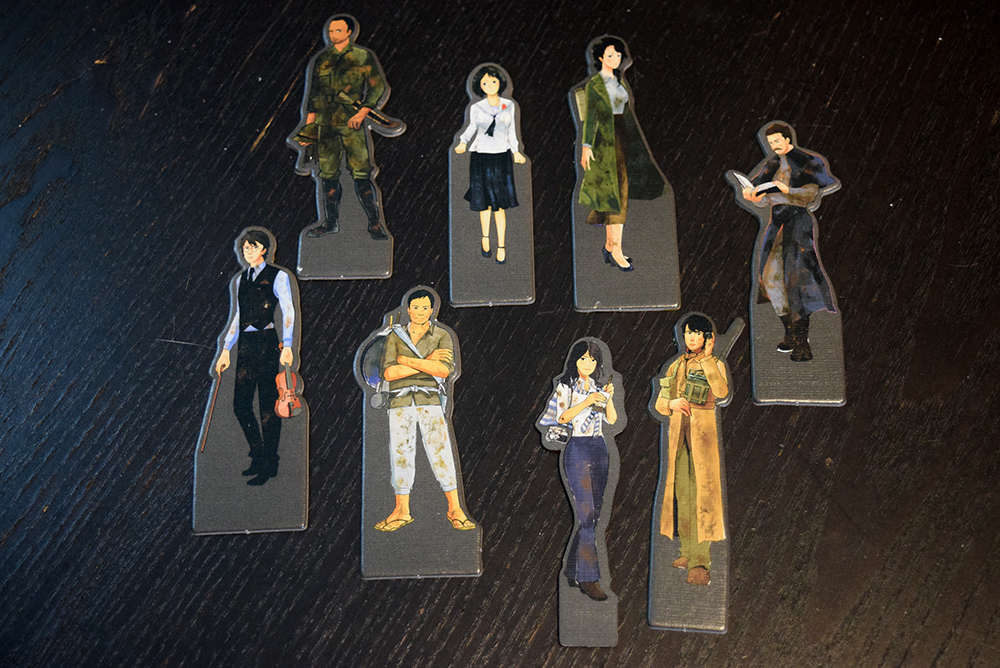 And speaking of odd contrasts, there are a handful of elements in the game that seem strangely incongruous with the rest of the theme.  Once per game, players can call on the blessing of three gods to evoke positive effects, and this is the only instance of anything remotely supernatural in the game.  Also, there are animal buddies which confer on their owner unique abilities…at least until you decide to kill and cook them.

Jess
NO.  Absolutely not!  You’re telling me that there’s finally a game where I can make friends with a capybara, and you expect me to eat it?!?  Hell no.

Andrew
I totally agree.  And that’s possibly a side effect of the fact that Raid on Takao hasn’t been ‘sanitized’.  The theme is disturbing and dark, and there is a lot in there that simply runs with that – PTSD, dead pets, eating disorders, death from despair…it’s not a feel-good game at all. 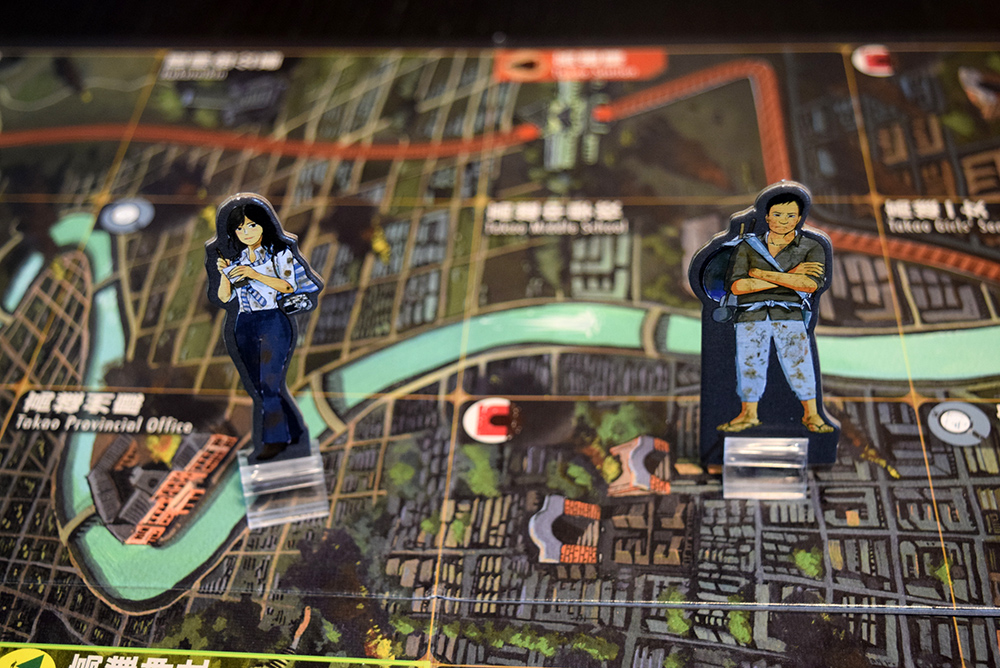 On the other hand, it does feel good when your plans come together.  Accomplishing personal goals is great, and surviving round after round of brutal bombing and scenario-driven danger will make you and your group feel good, hopeful – with every turn you don’t give in to the despair, you come closer to making it out alive if not unharmed.

But then the bombers pass overhead, and it could all be over in an instant. 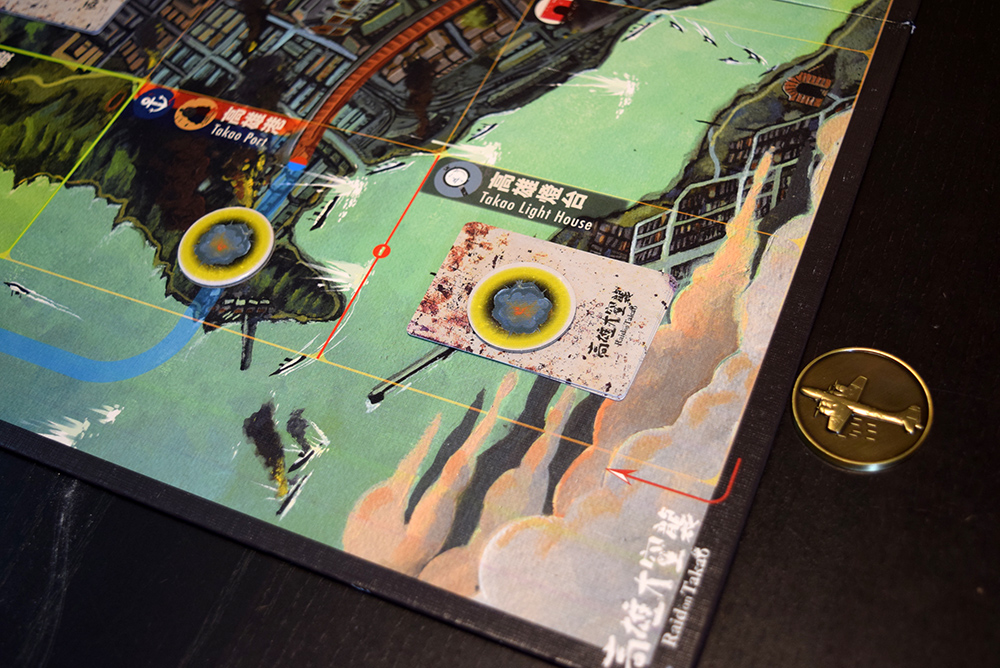 On the whole, we felt Raid on Takao was a pretty strong cooperative game.  While it felt like there were some relatively minor missteps in its design, overall we really appreciated the thematic experience it delivered.  For those looking for an intense, often tragic story of regret and redemption, Raid on Takao might make for a unique experience.