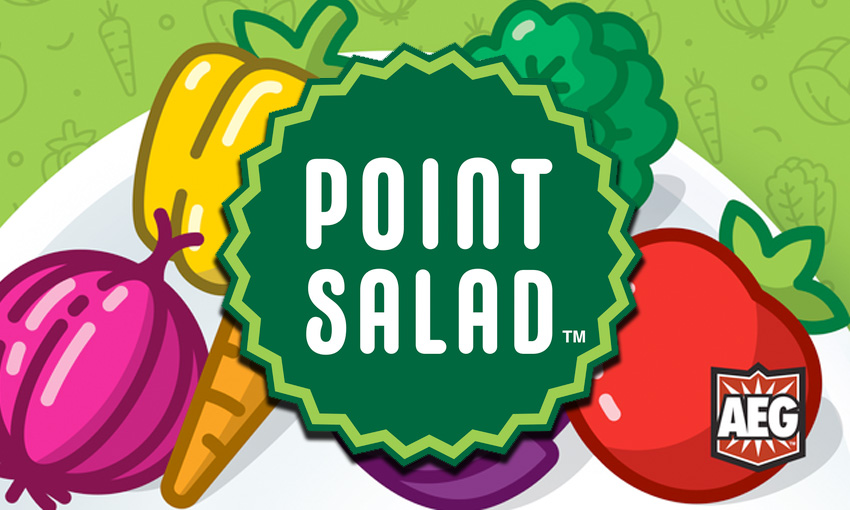 Point Salad is colorful, accessible, and incredibly playable.  It's exactly the sort of game that will make for a satisfying appetizer for bigger game nights, or as the perfect light snack for gamer pairs looking for something they can play while they chat.

Andrew
So, I’m a sucker for a good filler game.  Because of the way I tend to play board games, I appreciate any game that will let me play multiple rounds, or let me have a complete game experience with enough spare time to play a different game altogether.  A gaming equivalent of an appetizer, an amuse bouche, a tasting course in cardboard form.  A filler that isn’t too filling.

Andrew
Yeah sure, I could go for one.  Why do you ask? 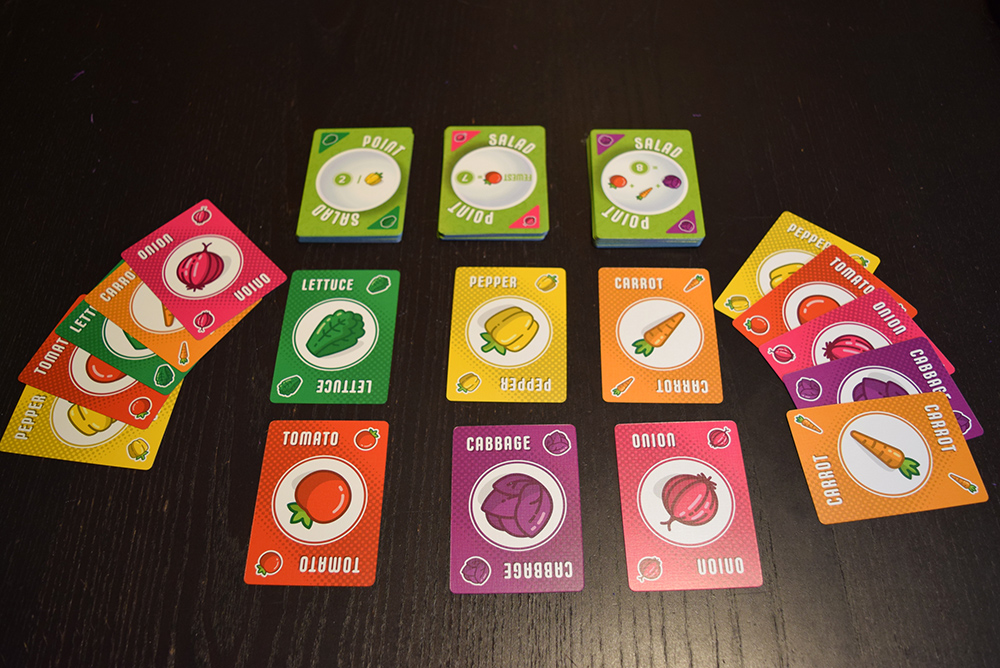 Point Salad is one of those games that does a lot with a little – in this case, nothing more than a deck of brightly colored veggie cards.  These cards are double sided, with one showing a veggie and the other showing a scoring rule. 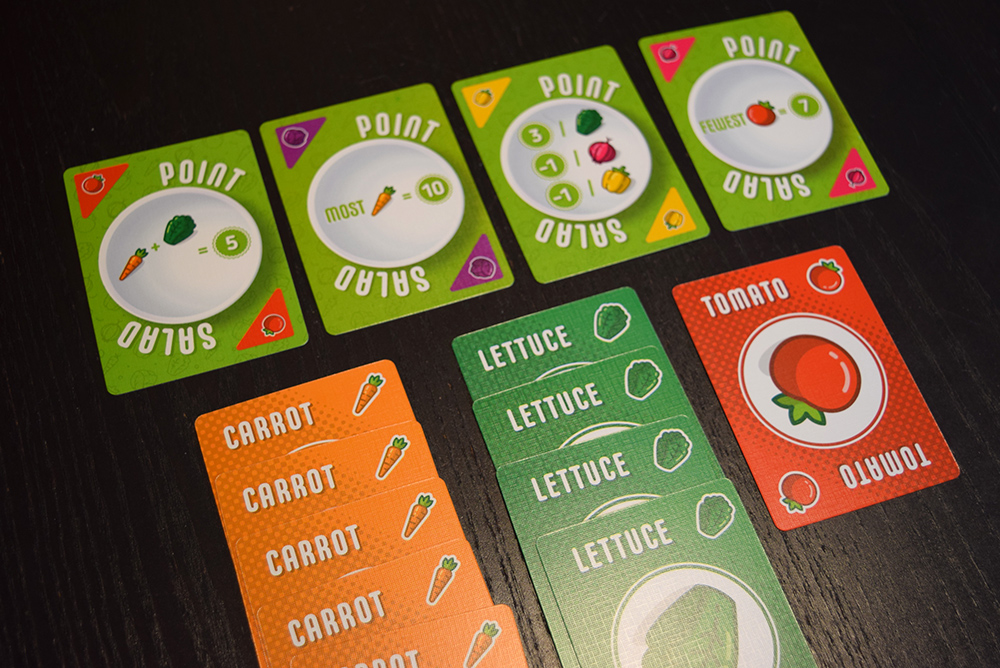 In Point Salad, players will amass a pile of veggie card which they will use to complete sets and score points.  Each turn, players will draft cards from those on offer – either snagging 2 from the veggie-side-up market, or 1 from the point card draw piles.

When the end of the game is triggered by all the cards being drafted, each player will score by comparing the salad they have created against the point cards they have collected.  The player with the most point-ful salad is the winner!

The only other rule is that, at any time, you can always flip over a point card you drafted to turn it into a veggie (but not vice-versa).  That way, an early draft that isn’t working out can still potentially be converted into points.

Jess
And that’s it!  I love that Point Salad is so straightforward, rules-wise.  It makes it a perfect game to introduce to new players, and it’s so easy to pick up and play!

Andrew
Absolutely, yeah!  I feel like it’s a great weight – easy to pick up, with quick turns and accessible goals.

Jess
But it’s not mindless – I love the fact that you build your goals as you build your salad.  The question of whether to grab veggies or a point card is central to the strategy.  And of course, if you can manage to get multiple point cards that score off the same ingredients, then you’re well on your way to a pile of points.

Andrew
And that’s where the interaction comes in, because, of course, if I see you are collecting carrots or whatever, then I might want to draft them away from you.  And, critically, if you see I’ve got lots of tomatoes and a point card shows up that will give me points for them, you probably want to snag it yourself.  And the best part is that you can just turn it into a veggie, in case that helps you score your own points.

Point Salad is simple, yet satisfying.  Something we enjoy in games is that little micro-victory of completing a set, and this game gives you that over and over.  Of course, sometimes the random nature of the cards work against you, but Point Salad is quick enough that even if you struggle for an entire game and never quite get your combos going, you can easily just re-shuffle and play again, with nothing but 10-15 minutes lost.

The only time Point Salad slows down is when players start needing to calculate the relative value of taking a point card as itself vs. turning it into a veggie.  This is most often late in the game, and when I say ‘slows down’, I really just mean takes an extra couple of seconds, given the lightning-quick nature of Point Salad’s gameplay. 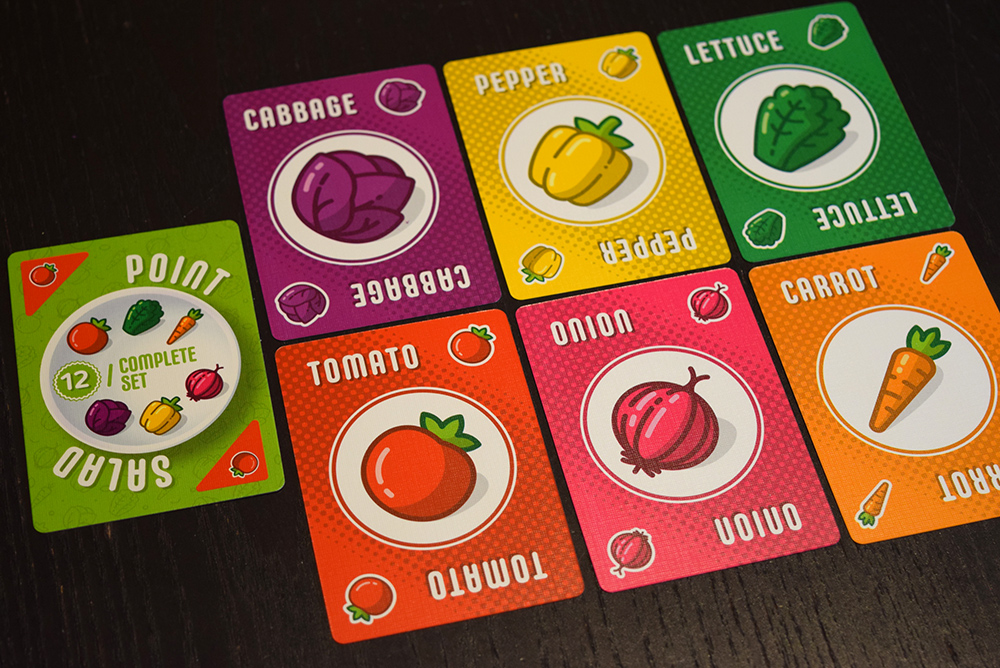 Overall, we really enjoy Point Salad.  It works great at the lower player counts – definitely an awesome game for 2 – while at the higher counts there is a little more chaos and less ability to plan (since by the time your turn rolls around, the market will have inevitably almost completely turned over).  But regardless of your number of players, Point Salad is a fun, light, easy to engage game that will tempt all but the pickiest of eaters – we totally recommend it!