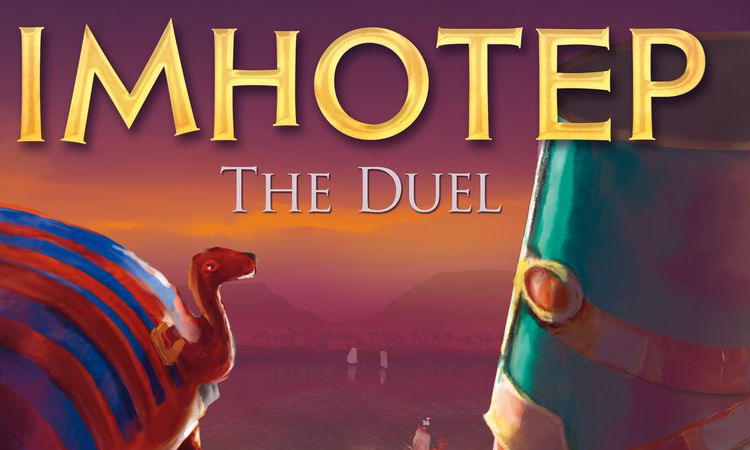 Istanbul: The Duel manages to distill some of our favorite parts of the original game into a tight, fast-playing experience for 2.  While we certainly lamented the loss of the big, chunky cubes, the focus on multiple paths to score points and strategic unloading of ships made this a successful reinterpretation of an already excellent game, which, given how quickly it plays, is likely to see the table more frequently.

Once, in the annals of Gameosity history, Josh wrote a review of Imhotep, a review which left no doubt that a) he is obsessed with cubes and b) it is an excellent game of cube placement, multiple scoring strategies, and some potentially vicious player interaction (who knew loading and launching boats could be so tense!).  Now, Imhotep: The Duel seeks to evoke those same delightful gameplay beats in a dedicated 2-player format and distilled down to 30 minutes.  How does it do?  Let’s take a look! 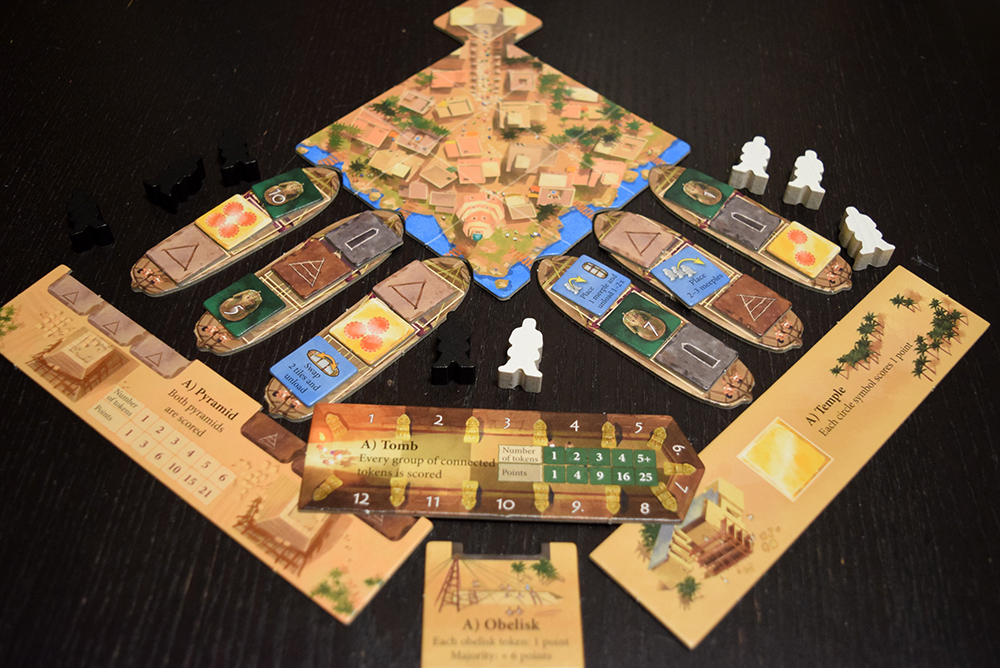 We received a review copy of Imhotep: The Duel from KOSMOS.

In Imhotep: The Duel, two players will square off in a set collection competition, as they assign workers to unload ships which carry supplies to construct each of the 4 monuments.  By strategically placing workers and controlling the timing of unloading ships, each of the builders will look to gather resources while undercutting their opponent’s ability to do so.

Jess
And when you say ‘square off’, I assume it’s because we’re using square tiles to represent resources, rather than big chunky cubes from Imhotep. I have to say, I like the visual weight of the cubes, but Imhotep: The Duel is pretty on the table, and there is definitely a visual element to how the different monuments get built and scored. 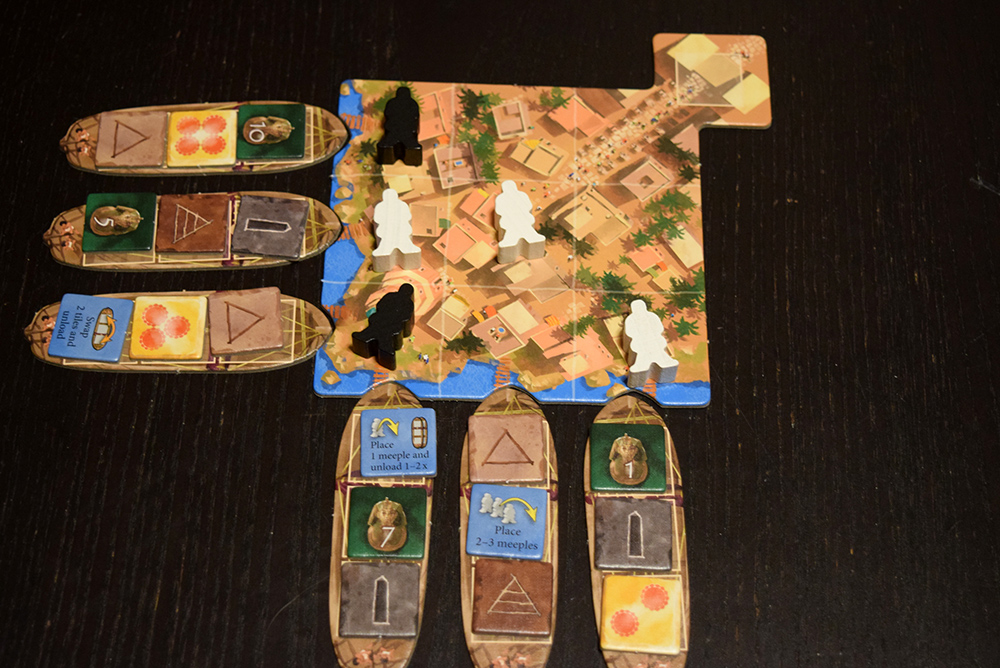 Each turn, players will either place a worker, unload a ship, or use a special action tile.  The meat of the game is in the placement of workers and the unloading of ships.  Workers are placed into the dock, which forms a 3×3 grid.  Each spot can only hold one worker, and workers are committed until they are used to unload a ship. 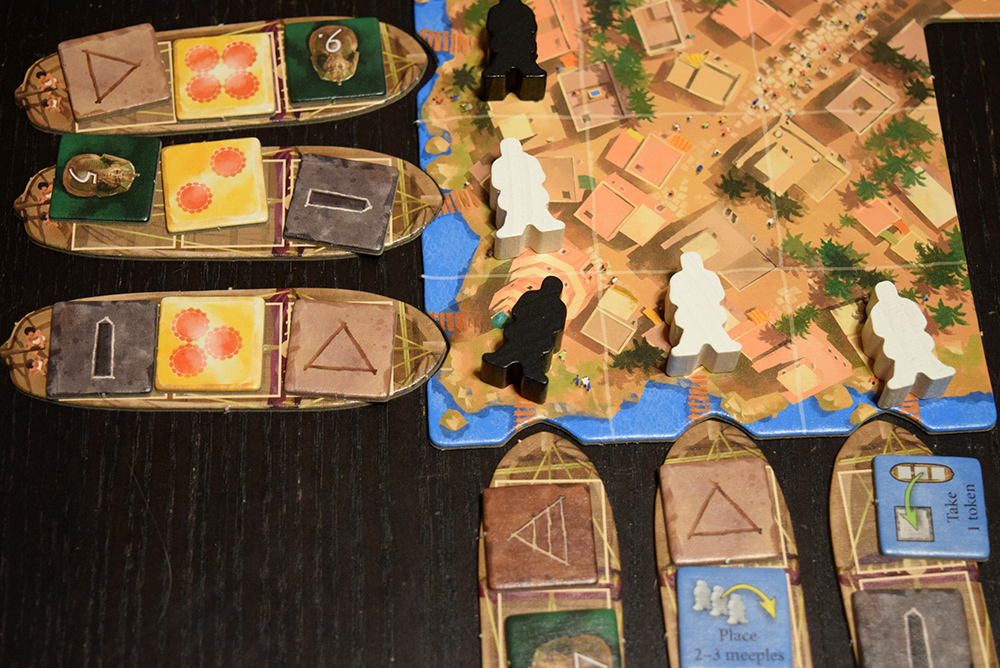 When a ship is unloaded (which can only be done once at least 2 workers are in the row or column matching that ship), each worker brings their player a tile from the boat matching their relative position in line.  It’s a little hard to describe in words, so here’s a visual:

When tiles are gathered, they get added to their respective monument, each of which scores in a different way.  For example, Tomb tiles get piled face-down, and are worth a number of points equal to the golden symbols on them, whereas Obelisk tiles are stacked vertically and are each worth a point, with the player whose stack is the tallest getting a bonus. 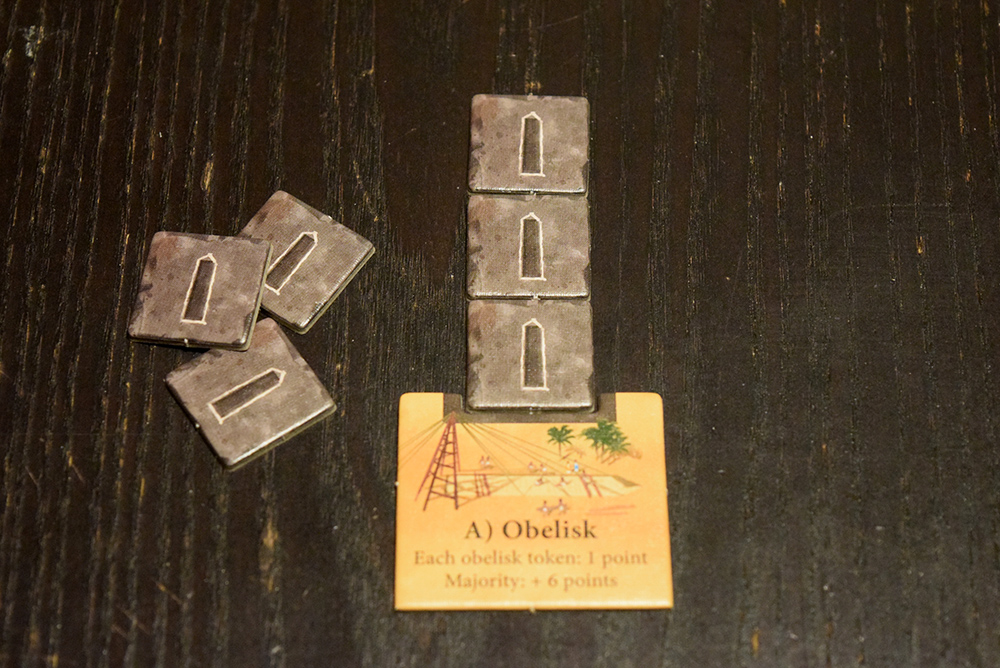 Action tiles let you (surprise) take actions instead of the standard ‘place a worker/unload a ship’.  These actions include rearranging the tiles on a ship, making multiple placements/unload actions, or even just taking a tile immediately.  They can be really useful, but they also take your entire turn to use (and are worth a point at the end of the game if unused). 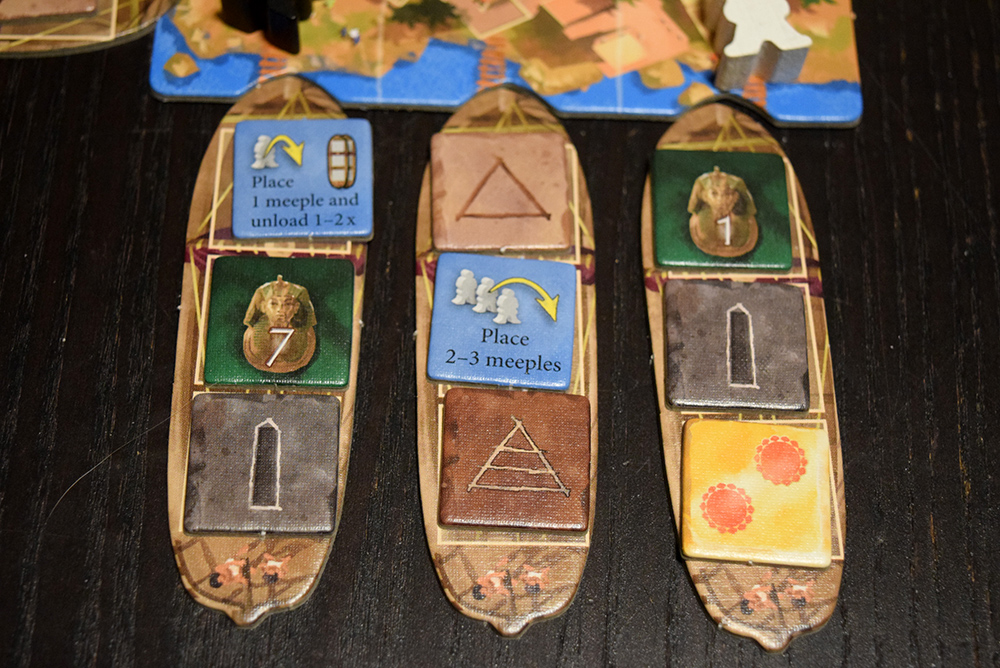 The game ends when the next-to-last ship is empty and can’t be refilled.  At that point, players will total their score to determine a winner, with ties going to the player who didn’t take the first turn.

Andrew
Ok, so we should consider Imhotep: The Duel in two major ways – on its own merit, of course, and how successfully it translates the experience of Imhotep into a fast, 2-player experience.

Jess
Yeah, for sure.  On its own, I think Imhotep: The Duel is really successful.  It’s tight and fast, capitalizing on the limited per-turn decisions to keep things moving.  The description says 30 minutes, but we’ve played it in just about half that.

Jess
Absolutely.  I’m a huge fan of games that give you multiple paths to score points, and for a game of such relatively limited footprint, I think Imhotep: The Duel is hugely successful in that way.  Each of the monuments scores differently but all of them feel equally viable. 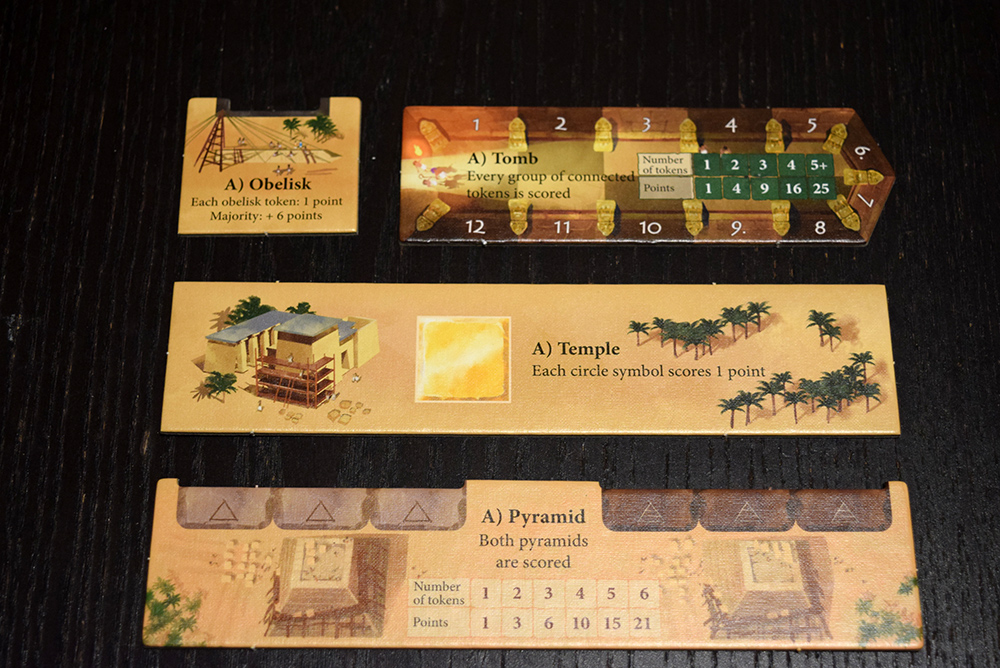 Jess
Yeah, but in my experience, you do better focusing in on a couple rather than trying to get points all over the place.  I tried the strategy of scoring everything, and got trounced pretty badly when I did.

Andrew
For sure, but another part of it is knowing how to undercut someone.  Either player can launch a boat once there are 2 workers assigned to it, regardless of whose workers they are.  So sometimes, it pays to spend your turn unloading a boat prematurely, to stop the other player from being able to jump in to that 3rd slot.

Jess
Yeah, you did do that a lot.  Jerk.  And since unloading a boat removes the workers from the dock, it clears space that can then be grabbed.  There’s a surprising amount of strategy packed into this little box! 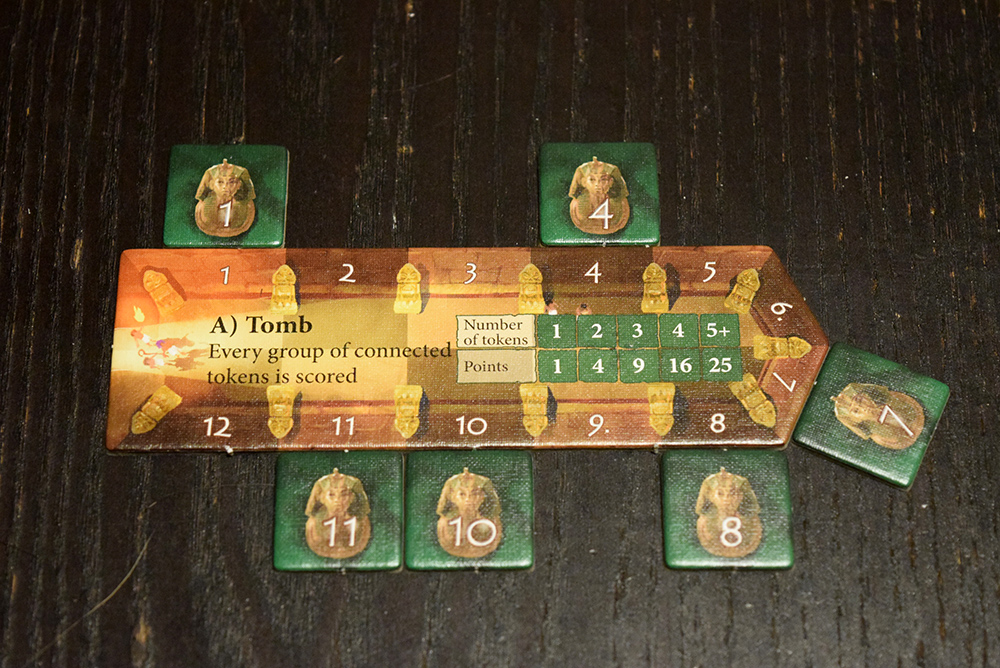 Andrew
I totally agree on all points, maybe except for the ‘jerk’ part.  But yeah, that’s worth noting – Imhotep: The Duel definitely puts you up against the other player in a more direct way, and there are definitely times when the difference between winning and losing will come down to how well you’ve been able to disrupt your opponent’s strategy.  So, you know, just be aware of that. 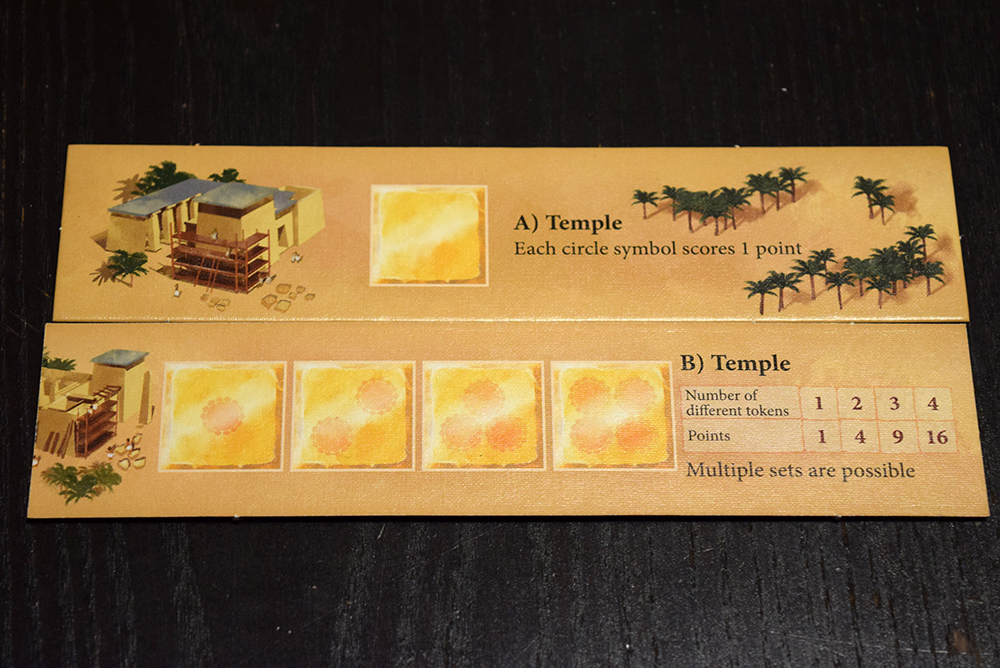 For added depth, each of the monuments in Imhotep: The Duel has both an A and a B side, with different scoring rules for each.  Players can mix and match which side they use each game, as long as both players are using the same side for a given monument, and these changes really will affect your strategies.  It’s great! 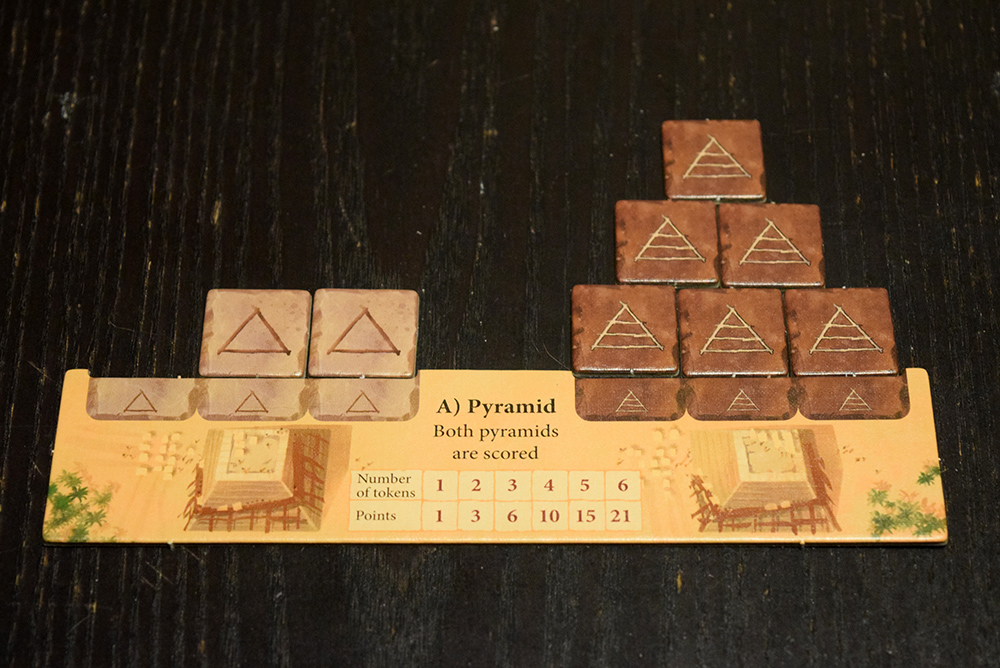 But how does Imhotep: The Duel stack up against it’s cube-laden predecessor?  Well, for our money, we think it does a really excellent job of concentrating down the experience from that game into a smaller package.  Imhotep is amazing, don’t get us wrong (Josh would never forgive us if we said otherwise), but if it’s just going to be the two of us, I think we’re more likely to break out Imhotep: The Duel than Imhotep, and we’ll still get a lot of the same great experience.

Overall, we were really impressed with Imhotep: The Duel.  It’s a fantastic interpretation of a fantastic game, and we highly recommend it!

Recommendations based on Imhotep: The Duel 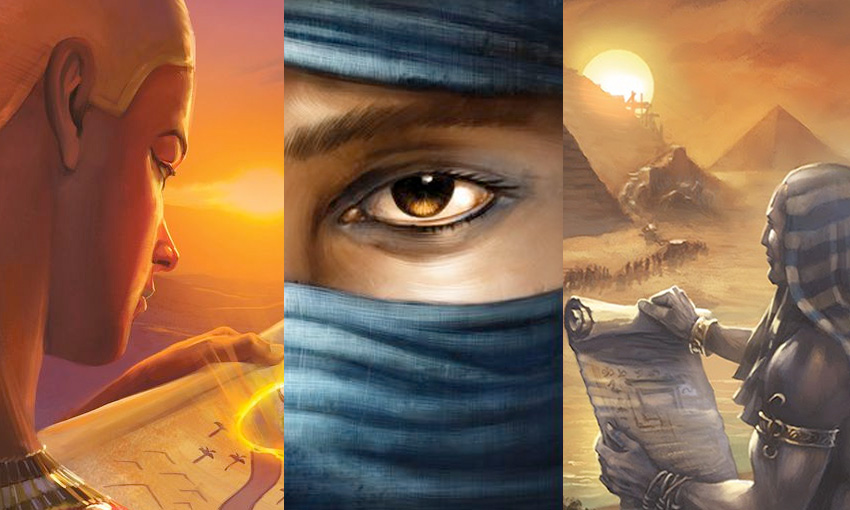