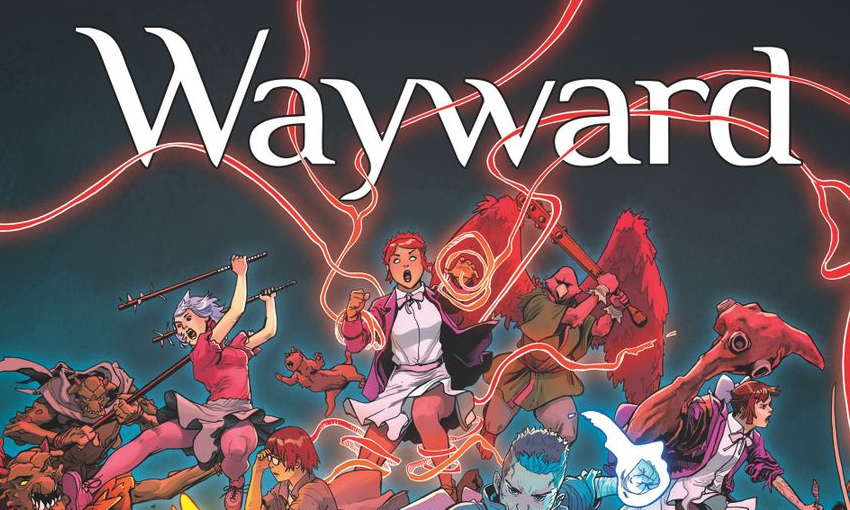 Wayward is a fully cooperative game based on a comic book of the same name.  It features teenagers with super powers, variable scenarios, otherworldly monsters, and dice driven gameplay that will test your willingness to push yourself and your allies to the edge.

Andrew
Drawn from the comic world of the same name, Wayward is a cooperative game where you and your friends will take on the roles of the titular Wayward, a cadre of teenagers born with supernatural powers.  However, the advent of the Wayward has coincided with a spike in the activity of the Yokai, monsters from Japan’s mythic past, who now threaten the safety of all.  Will the Wayward bring their powers to bear in the defense of our world, or will they fail, paving the way for the age of the Yokai?

Drawn from the comic world of the same name, Wayward is a cooperative game where you and your friends will take on the roles of the titular Wayward, a cadre of teenagers born with supernatural powers.  However, the advent of the Wayward has coincided with a spike in the activity of the Yokai, monsters from Japan’s mythic past, who now threaten the safety of all.  Will the Wayward bring their powers to bear in the defense of our world, or will they fail, paving the way for the age of the Yokai? 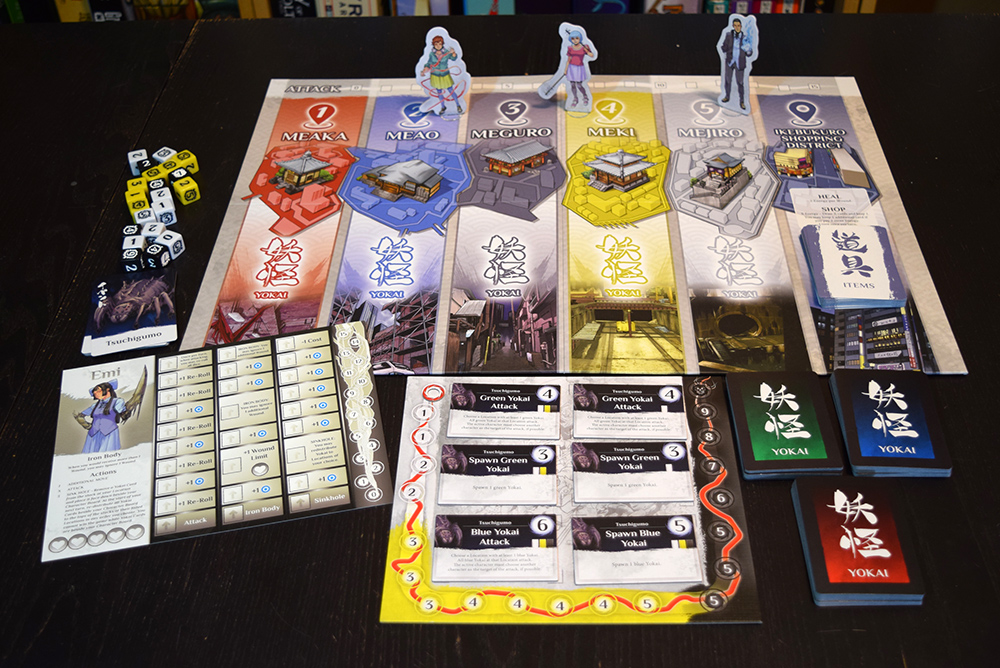 We received a review copy of Wayward from IDW Games.

Now, right up front, I want it said that none of us were familiar with the comic which Wayward is based on, but I will simply say that having played the game, I’m definitely interested in checking out the comic!  Familiarity with the comic isn’t the slightest bit necessary to play the game (though I imagine it would be pretty cool for fans of one to experience the other).  But let’s move on to the game itself! 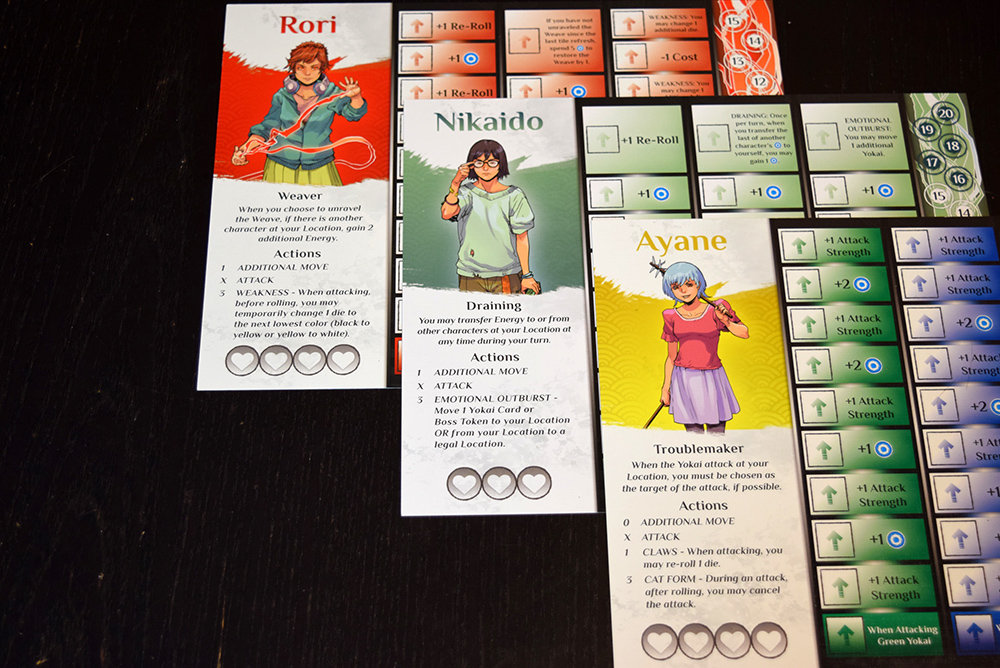 In Wayward, each player will control one of the Wayward.  Each teenager has a different power set, and their abilities will develop as they defeat Yokai and work towards overcoming the scenario goal.  Each time you play, you will decide which Yokai your team will square off against, and each of them features unique setup and game mechanics. 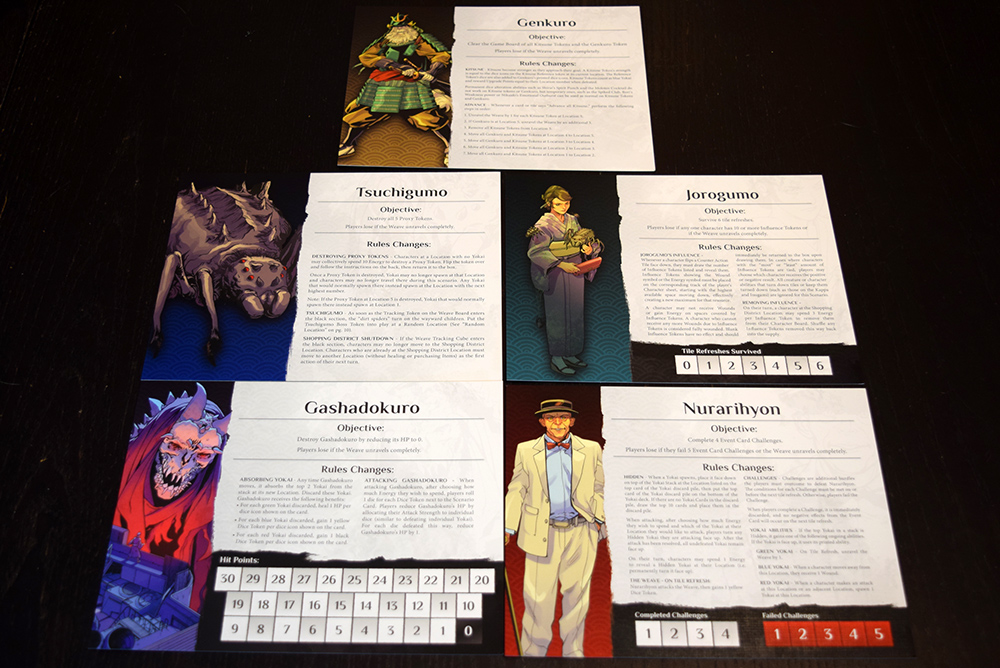 However, regardless of which foe you face, the core gameplay in Wayward works like this.  Each turn, players will move between locations, gathering resources in the form of items and energy, and then spending those resources to defeat the lesser Yokai who appear to attack our heroes and the locations they defend, ultimately trying to destroy the Weave, and thereby our reality.  The jerks. 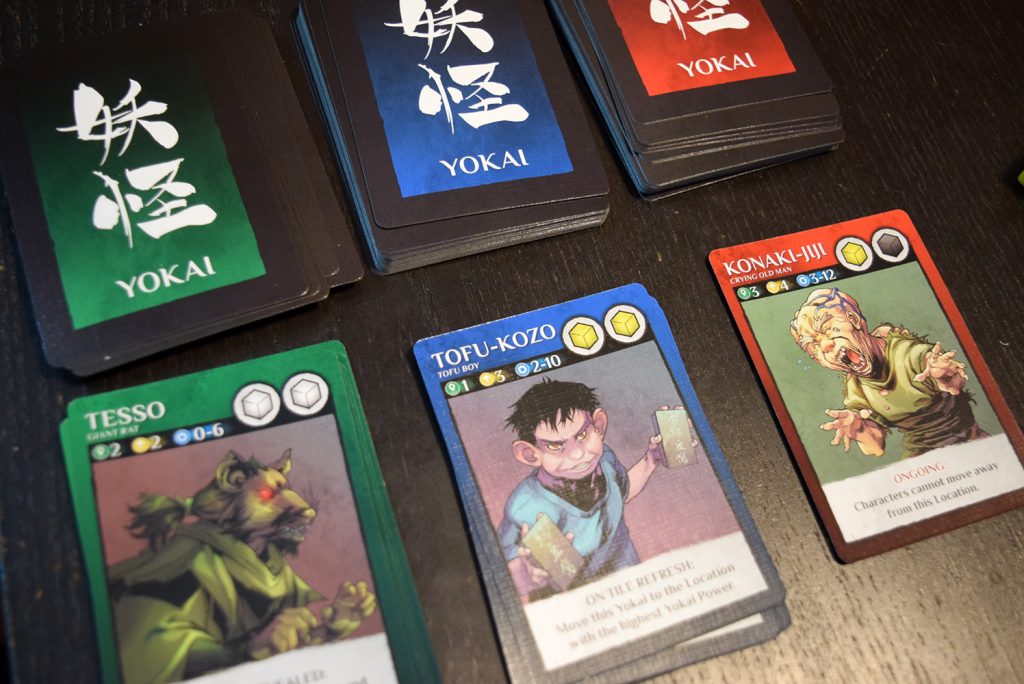 Energy is the key resource in Wayward – it will power your characters’ special powers, and spending it is absolutely necessary to defeat your foes.  Each turn, you will gain energy by activating one of the tiles on the Weave board.  However, the more energy the tile produces, the more harmful an event it will trigger – often either adding more Yokai to the board or triggering a Yokai attack. 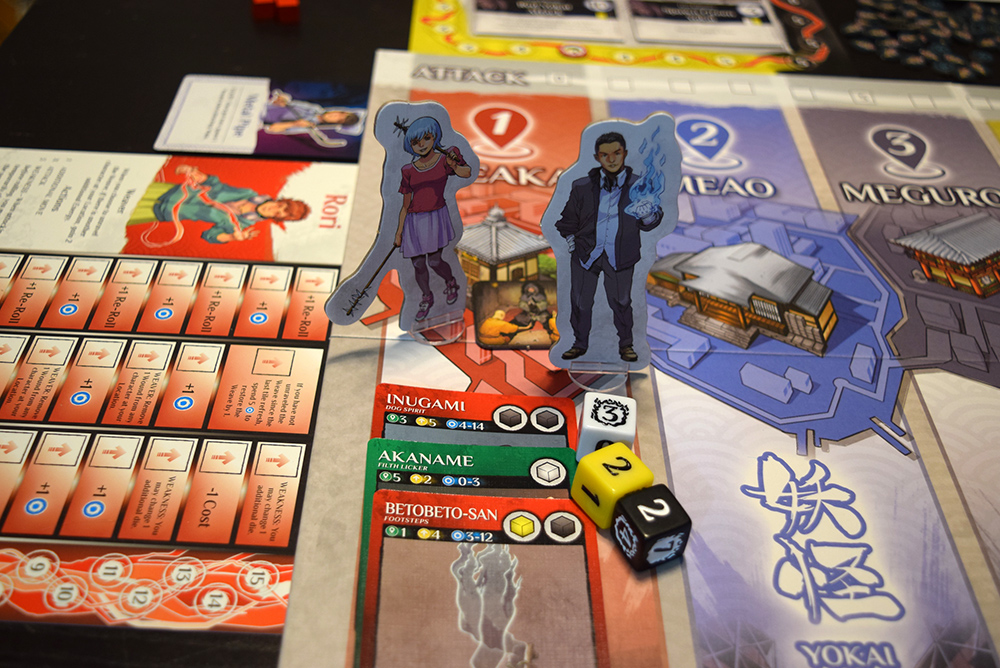 When Yokai attack, they will roll dice to see how many hits they succeed in making.  If a character is at the location, then the character can absorb some of the damage, protecting the Weave at the cost of themselves.  If not, the Weave takes damage, and as it does, things get progressively worse, ending in an eventual loss for our heroes. 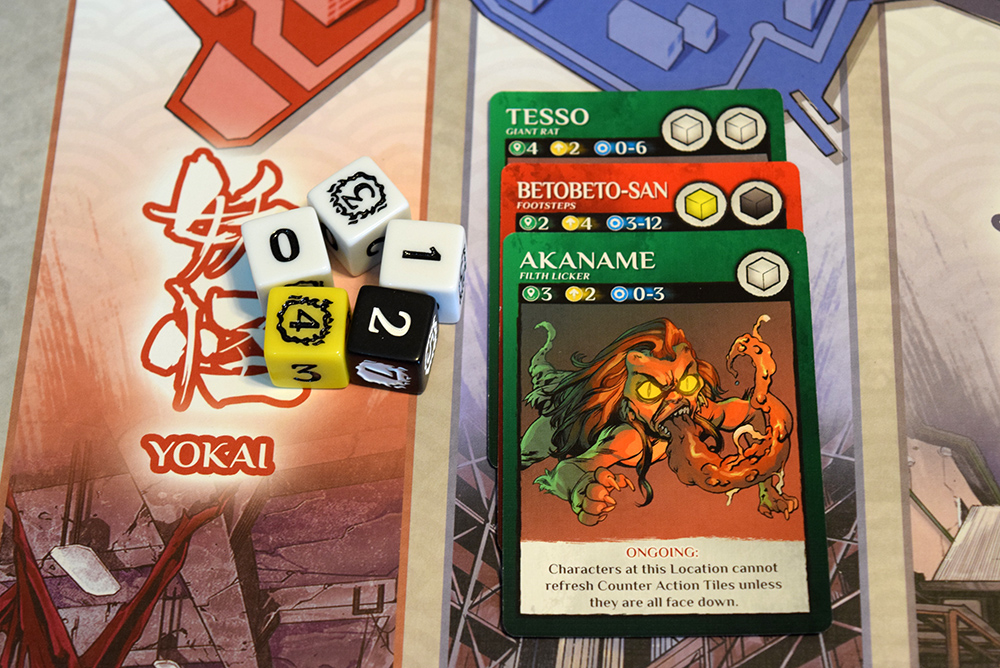 But all is not hopeless.  On their turns, players can travel from location to location, fighting the Yokai by spending Energy.  The Yokai will defend themselves by rolling dice, and if the player’s spent energy meets or exceeds the value of the dice, then the Yokai are defeated.  Of course, if the Yokai survive, they might harm the players in retaliation.  For each defeated Yokai, though, your team will be able to improve their characters’ abilities, making them better suited to facing down the next wave of enemies. 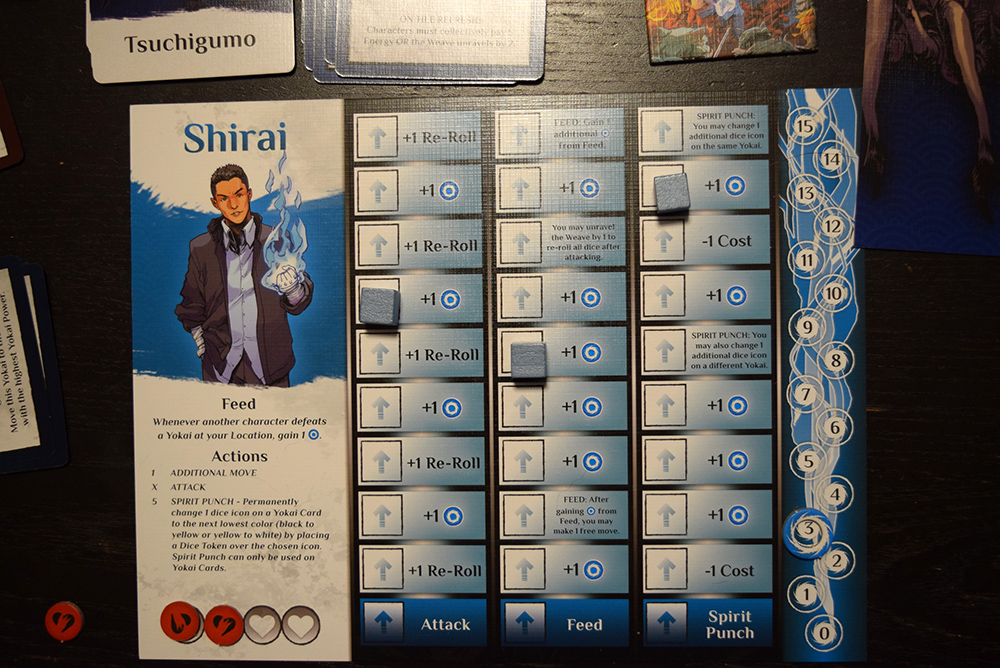 The challenge of Wayward is one of constantly needing to balance the need to control the Yokai which pile up at each location while simultaneously managing to complete goals related to the scenario you are playing and handling randomly-drawn events which are also unique to that game’s scenario; some helpful, others decidedly less-so. 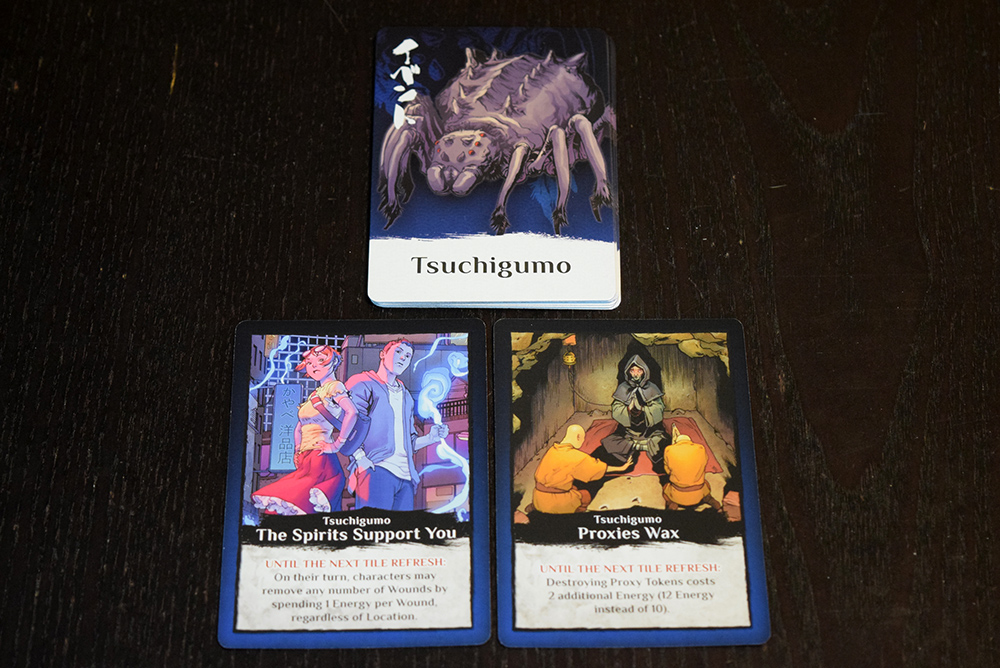 Each scenario sets up differently, with unique goals and rules, and they range from manageable to extremely difficult.  Despite sharing core mechanics, they each feel different, and provide a fresh challenge with each play. 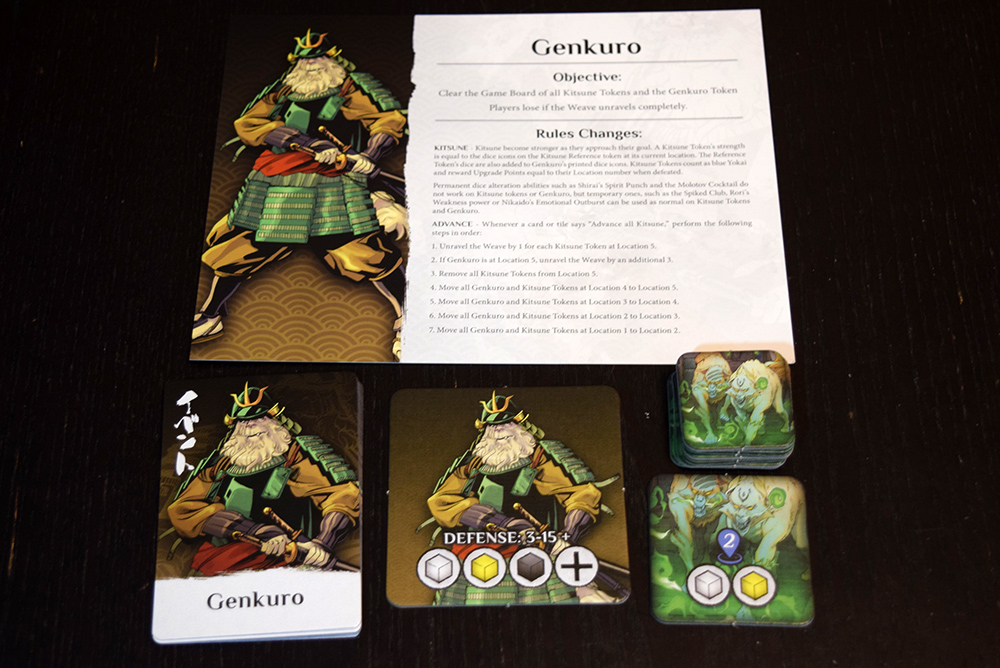 That said, sometimes you’ll be so busy putting out fires that you’ll find yourself making no progress towards advancing your scenario agenda, and that means that your team will eventually fail to stop the progress of the Yokai unraveling the Weave. 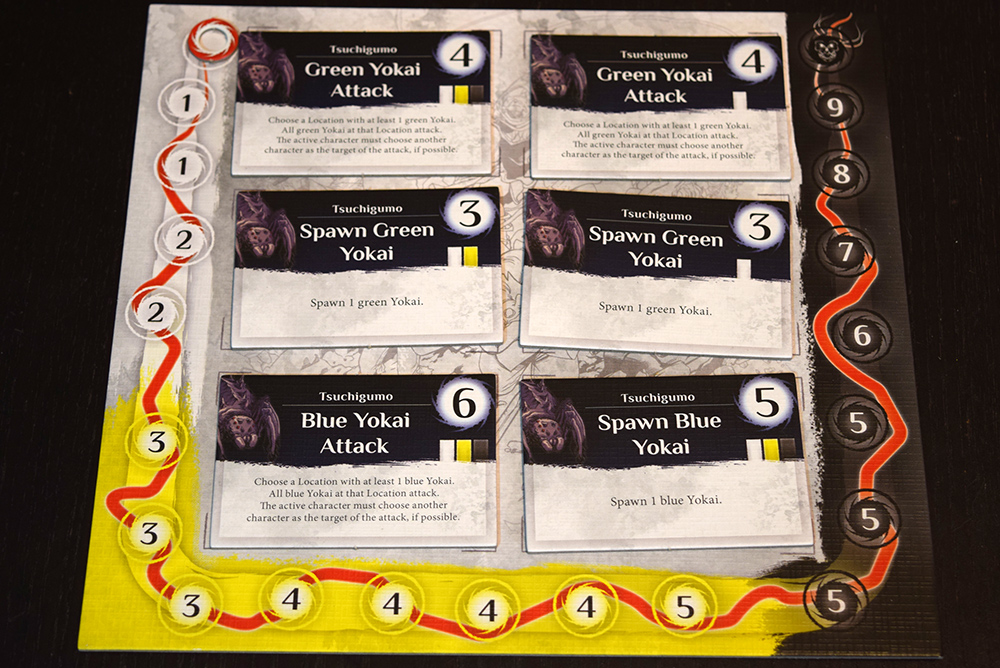 Every point of damage done brings the game closer to a crushing loss, and the satisfaction you’ll get from defeating your enemies will turn sour when you realize that you’re no closer to victory.  Keeping that balance in mind is key, but can be really challenging. 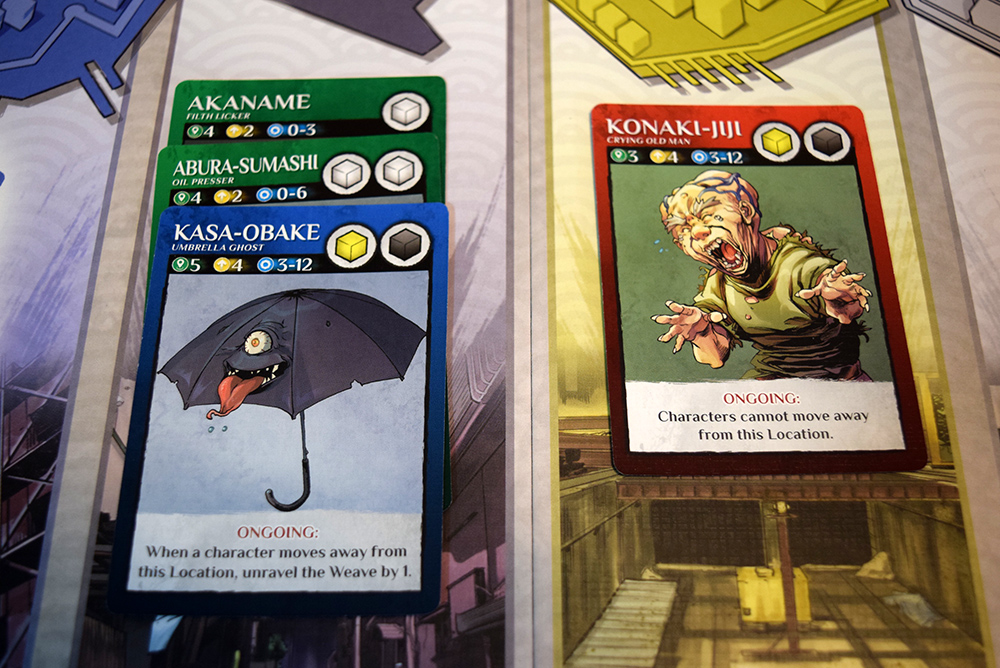 However, the reality is that Wayward is a push your luck game, at its core, and that’s where a big part of the difficulty will stem.  Energy is always in short supply, and overspending to defeat a Yokai will always leave you frustrated, while failing to defeat a Yokai because you were stingy with your energy is maddening.  Deciding when to commit to energy expenditures is one of the toughest decisions in Wayward, and its mismanagement will doom you and your team. 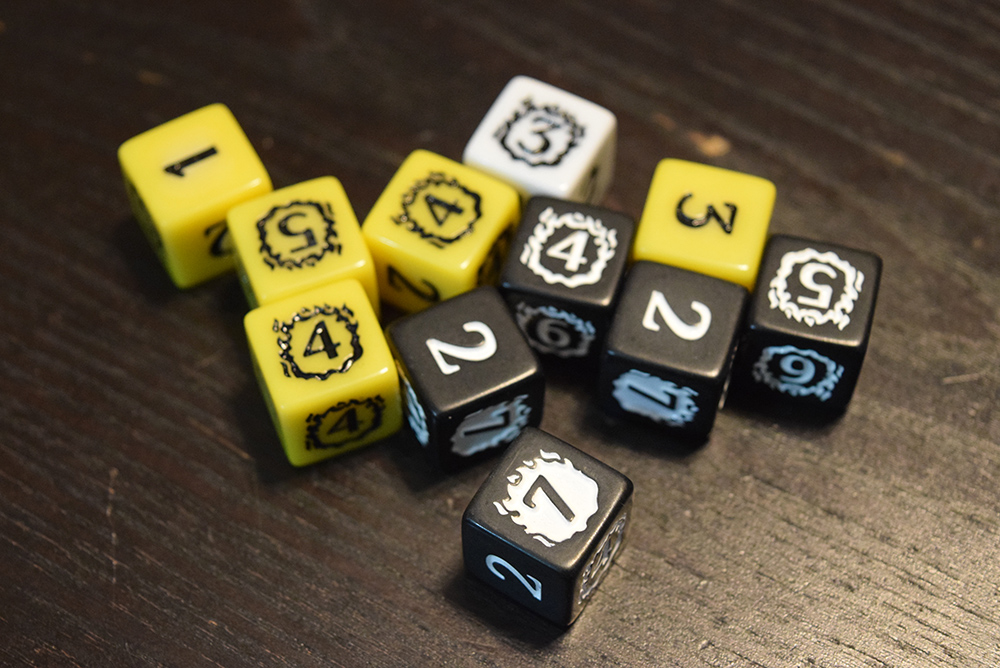 But sometimes the dice will just do that for you. 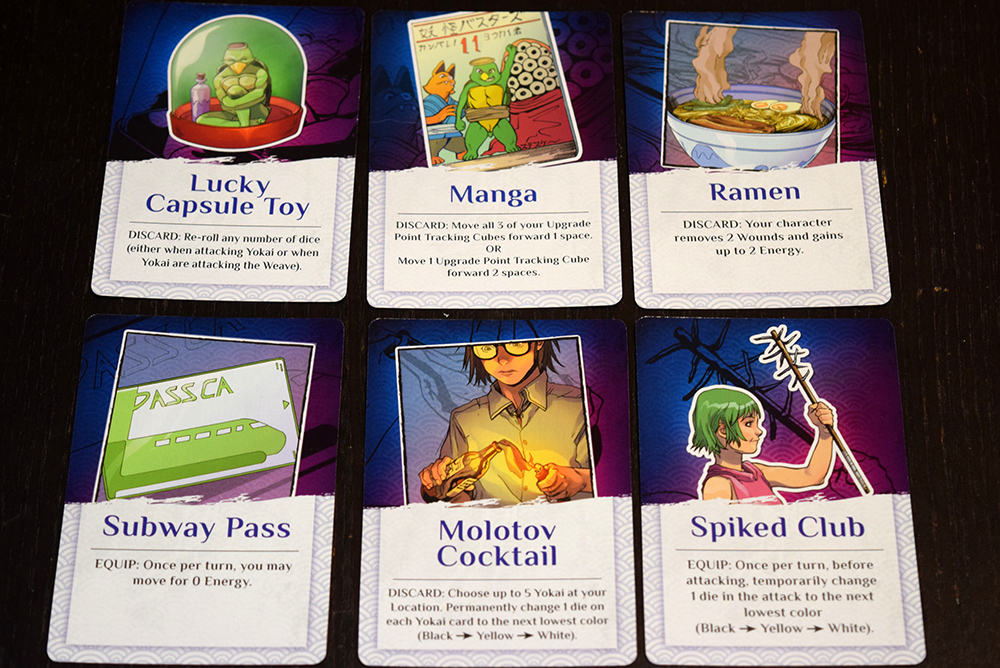 Overall, Wayward is a solid cooperative game.  The combination of randomness from the dice with the strategic differences imposed by the scenarios and unique character powers means that there is a lot of variety in this box.  If you enjoy working together to optimize your chances against a swarm of foes, and if you don’t mind occasionally being stomped on just because the dice were mean to you, then we definitely recommend checking out Wayward!

One thought on “Wayward Review”