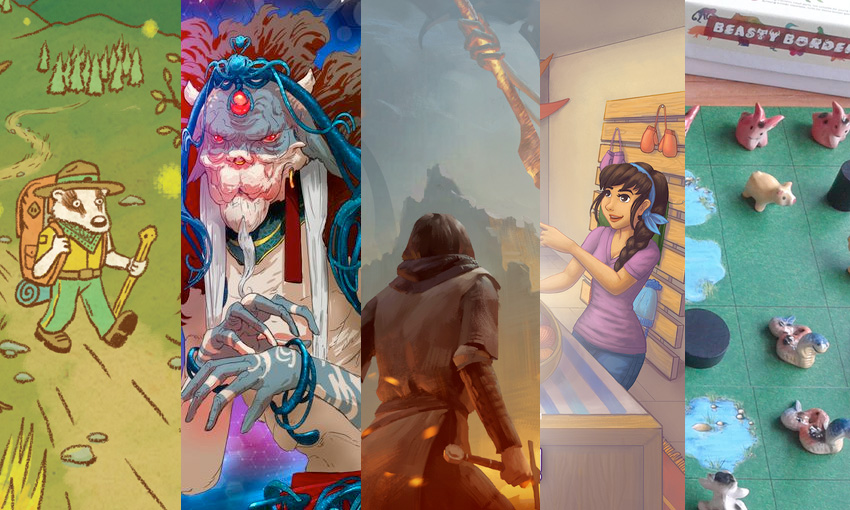 Jess: It’s Friday and I’m leaving for a trip. Circumstances have conspired against me writing this article, but here I am trying to get this together before I have to leave. What have I gotten excited about this week? Lets take a brief look! 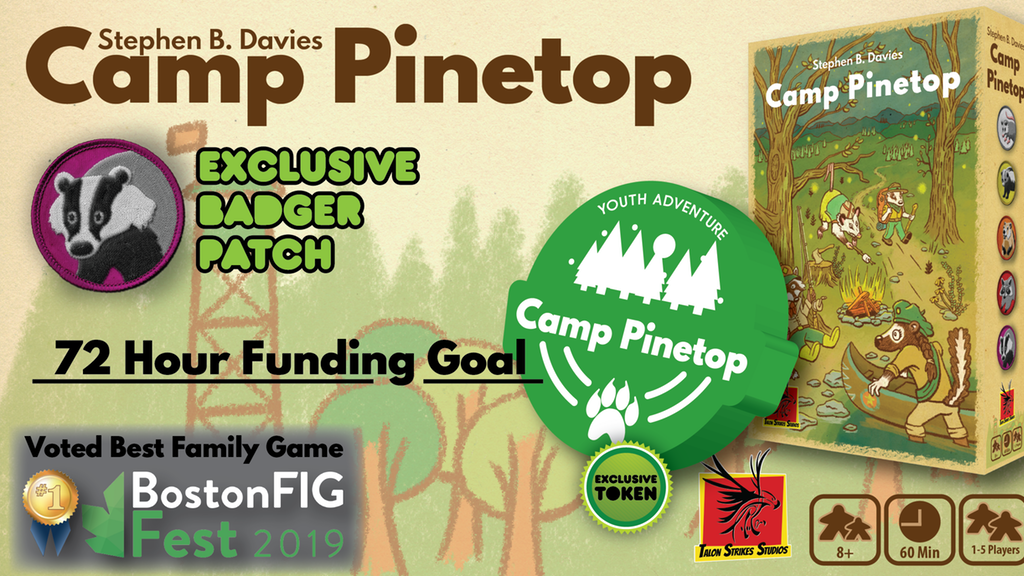 Camp Pinetop is built on the quintessential activity of scouting which is getting badges! In the game, players move between locations collecting supplies and using them to earn badges.To aid in getting badges, players can earn achievement bonuses which give them abilities such as more movement points or the ability to substitute supplies for other kinds. The game is a race to see who can reach Badger, the highest rank in the game. 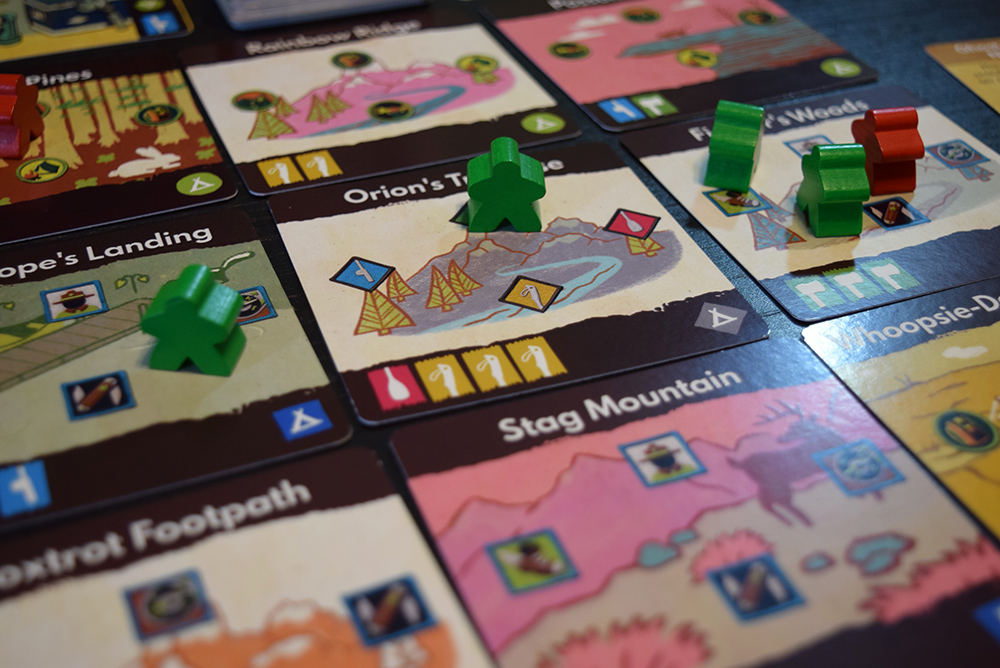 You can read our full review here, but my main impression is that Camp Pinetop is charming, the art is delightful, and overall I think it is a great family game. You can earn your exploration badge by visiting Camp Pinetop on Kickstarter here. 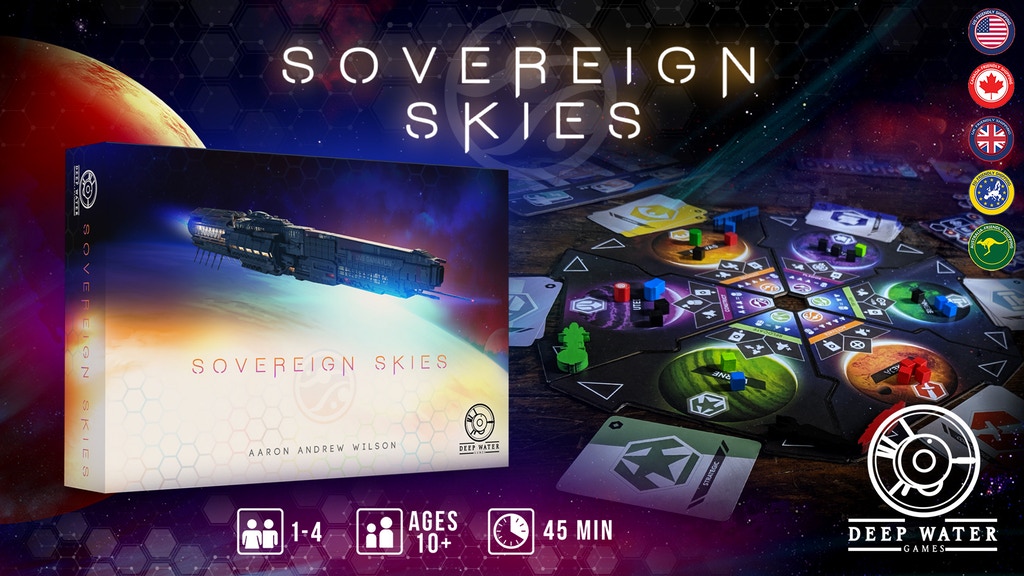 Sovereign Skies is an area influence/set-collection game where players take on the roles of powerful leaders trying to influence alien senators into letting them construct bases on the alien planets. Each turn players will move their motherships and have up to 3 actions: add a Ship, collect a Politic card, and/or perform a Planet’s Special action. Taking these actions will help boost your influence and gain you energy.

I like that the game uses rondel-movement, but you have the opportunity to spend energy to move farther along or to even reverse direction. Also not taking all of the actions allotted is never a waste as players can earn energy needed to make bigger moves. The game is gorgeous and looks like it will be a great time. Head on over to the Sovereign Skies Kickstarter to learn more. 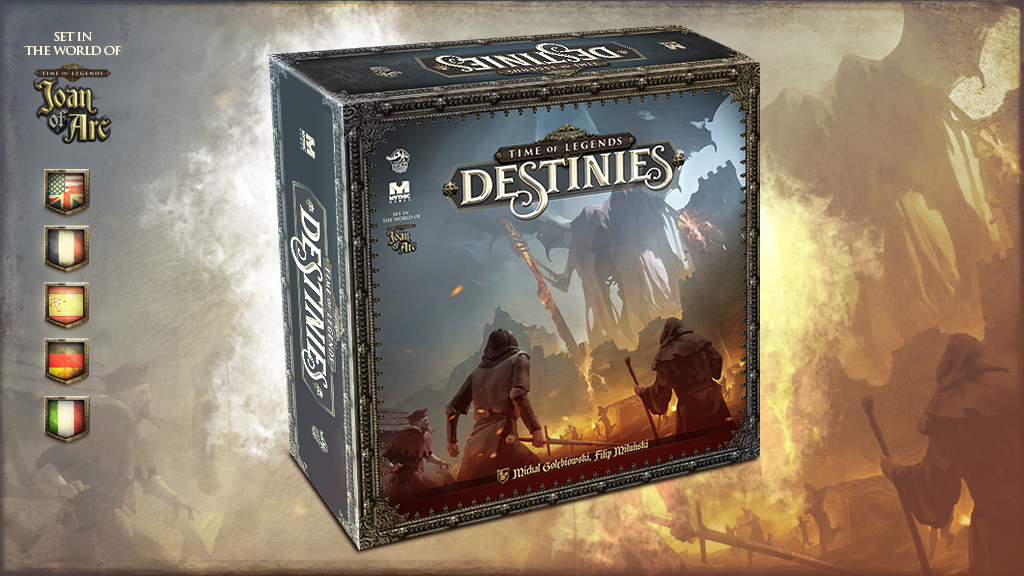 Time of Legends: Destinies combines roleplaying, board games, and an app-driven narrative to bring players into the dark medieval-fantasy universe established in Time of Legends: Joan of Arc. The game is played over a series of scenarios where players will act as heroes trying fo fulfill their destinies (end game goal). There are multiple paths to achieving a goal allowing players to enjoy their own unique story as they build it. 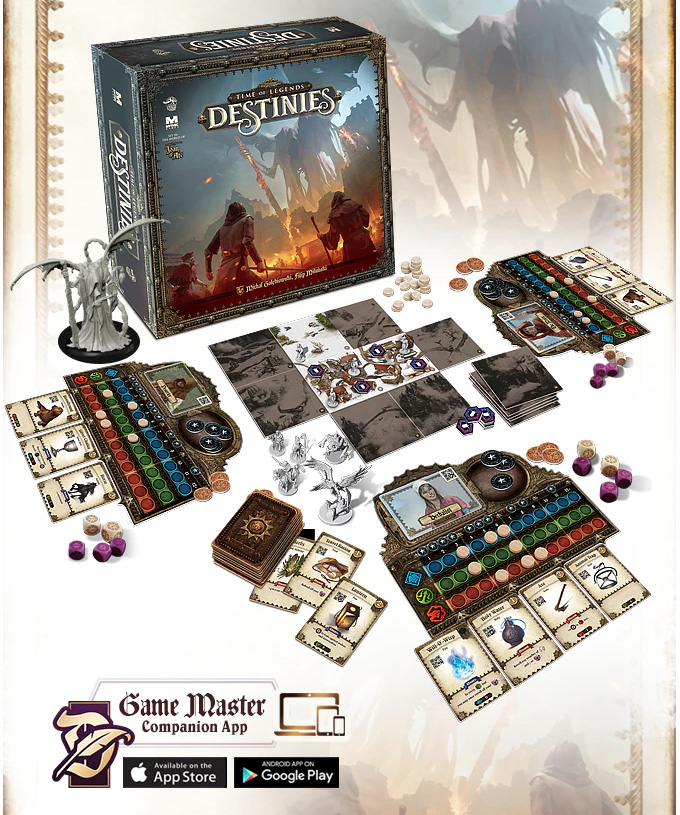 I like that Lucky Duck Games has integrated the Scan&Play app as part of the game. They’ve been doing really fun and interesting work with app assisted games and I look forward to seeing how this one adds to the experience. Join the adventure by visiting Time of Legends: Destinies  on Kickstarter here. 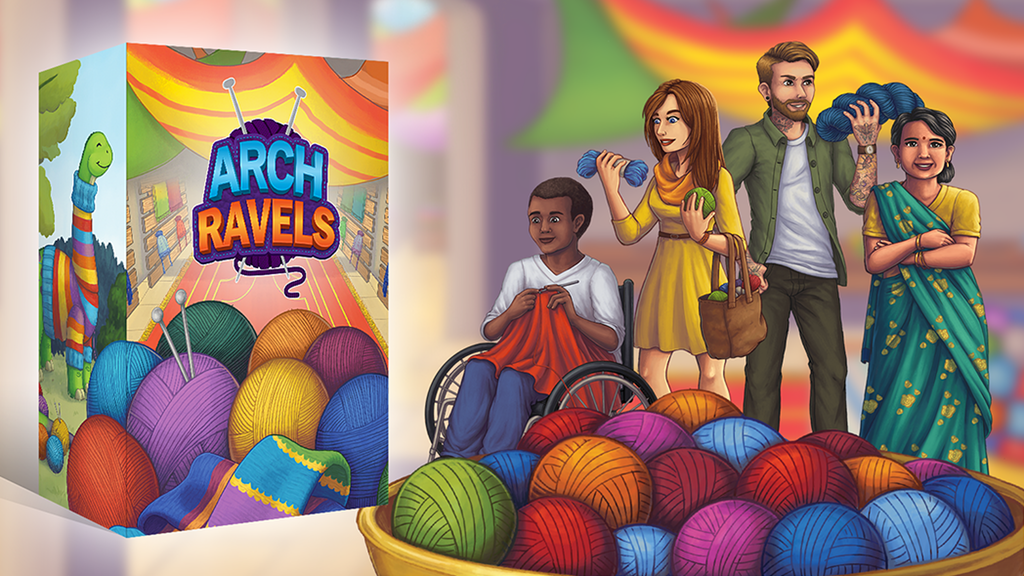 I don’t usually think of knitting as an intense battle of artistic talents, but in ArchRavels crafting is competitive. The game has a limited stash of projects and once they have all been completed, the crafter who earned the most points from their projects wins! 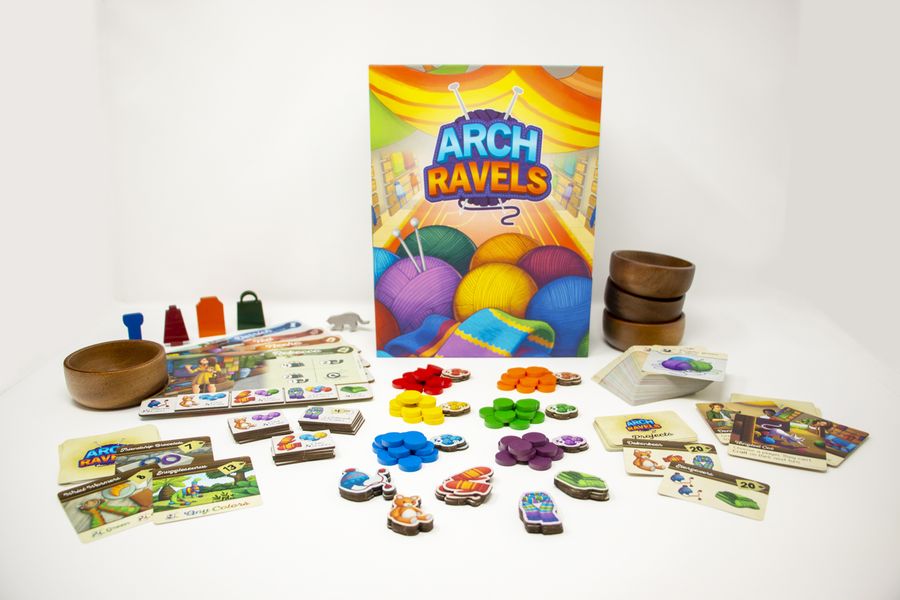 As a card-drafting/set-collection game, ArchRavels looks bright, accesible, and fun. I also love the look of the Gametrayz yarn bazaar tray that comes with the game. Knit and purl your way to success by checking out ArchRavels on Kickstarter here. 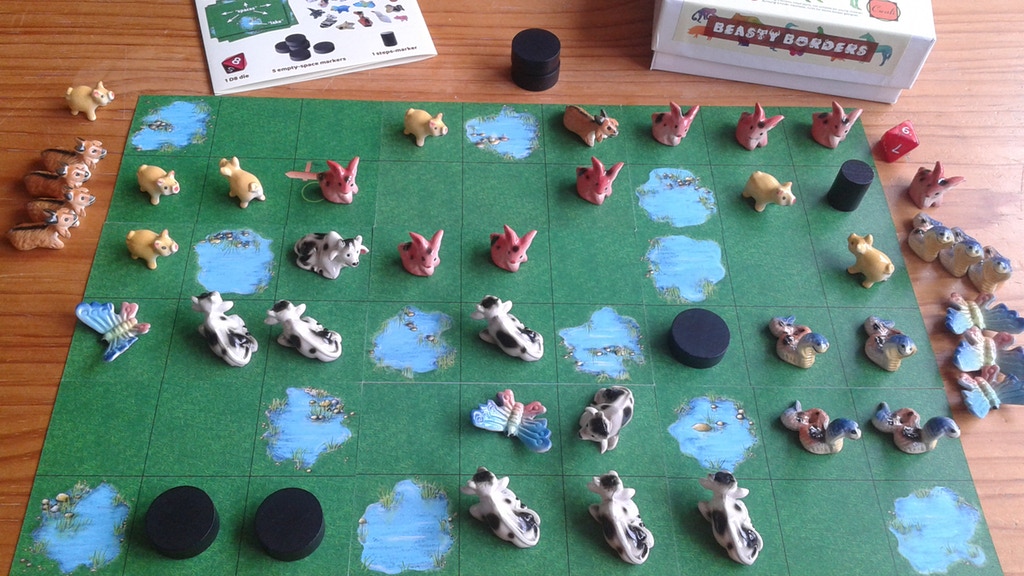 Corné van Moorsel makes great, quirky games that often don’t get the attention they deserve. This time around he’s making a limited run of his newest game Beastly Boarders; a game of animal herding. Each turn a player will roll a D8 and move their step-marker by the rolled number then chooses to place an animal or pass. If you pass, your opponent gets a chance to place an animal in your spot or pass as well. Players score points at the end of the game based on groups of animals. 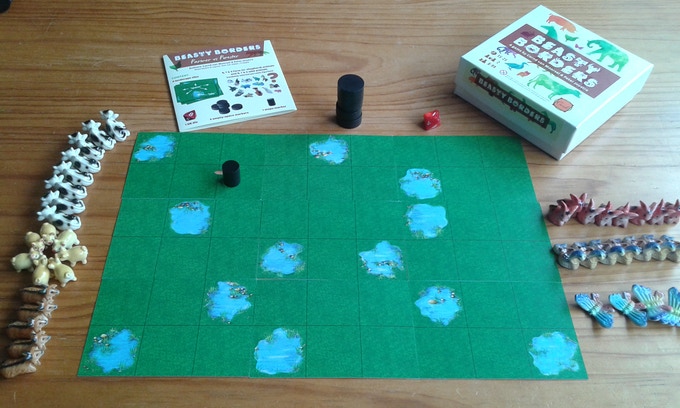 The game comes with small ceramic animal figures and is extremely limited edition. At the moment of writing this there are only 12 copies left for shipping to your home and 54 for Essen pick-up. If you are interested in a small-batch, home-grown game designed with loving care by Corné, grab a copy of Beastly Borders now from Kickstarter before they run out.