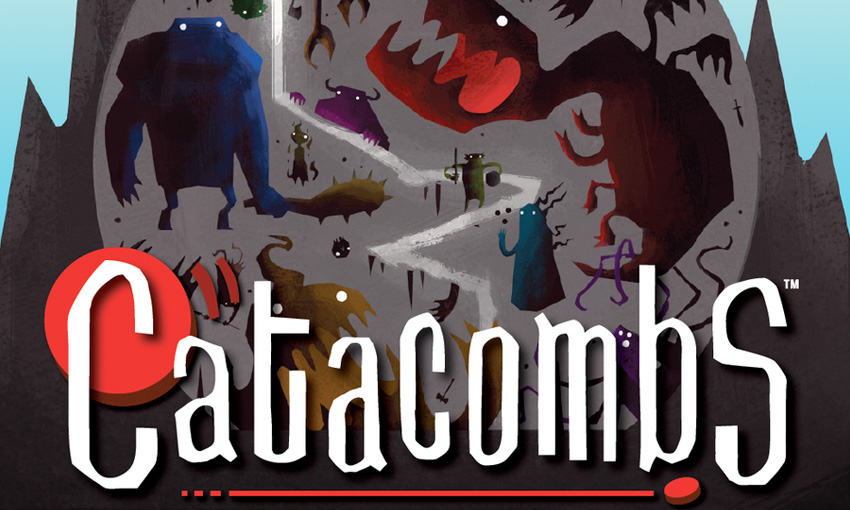 Catacombs (3rd Ed.) features a unique combination of dexterity/flicking and dungeon delving, presented with a phenomenal aesthetic that leads to an experience that feels somehow new despite being comprised of familiar mechanics and settings.

Andrew
Catacombs is, simply, a game that probably shouldn’t work.  While it’s true that we live in a world where new games sometimes feel like their creators took a bunch of descriptive game phrases, spun them in a hamster wheel as fast as the little rodent could manage, and stapled together the first three things that flew out (hopefully not the hamster), if you had asked me if a dexterity/flicking game that was also a tactical, asymmetrical, one-vs-many dungeon crawl would work, I probably would have expressed some skepticism.

Jess
And yet, here it is.

We received a review copy of Catacombs from Elzra Corp.

Catacombs has the thematic structure of a classic dungeon delving game.  There is a band of heroes, controlled by one or more player, comprised of your various fantasy archetypes – an elf, a thief, a barbarian, a chicken, etc….yeah, I did say a chicken.  You know, that classic hero. 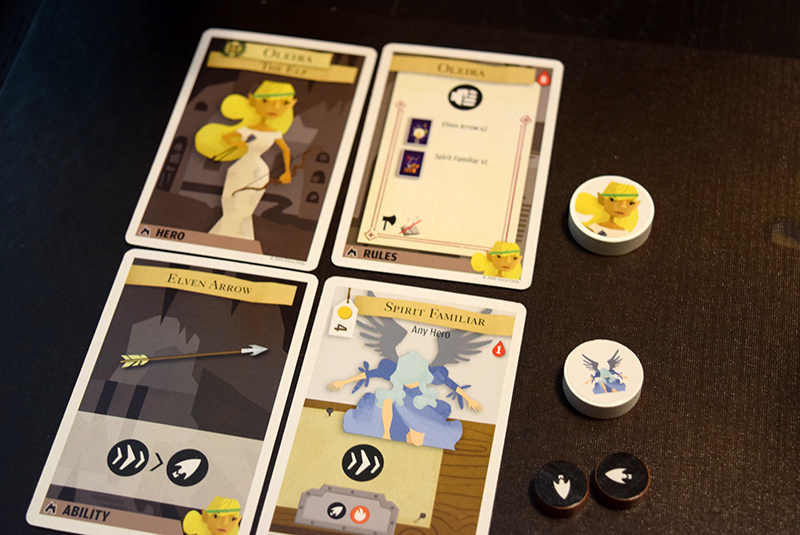 As they search through the depths of the titular catacombs, they will encounter waves of classic monsters, including orcs, trolls, bears which are also owls, skeletons with stabby bits, skeletons with shooty bits, and all other manner of creature who serve at the pleasure of the evil Catacomb Lords. 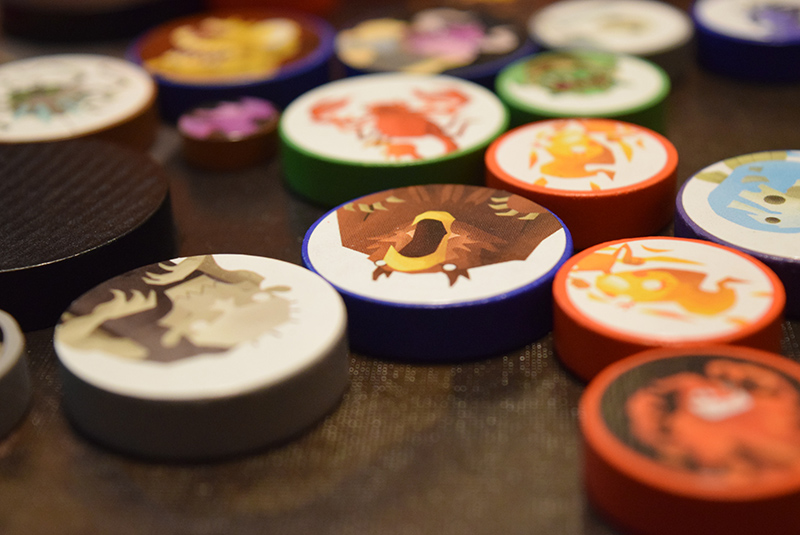 The further down the heroes venture, the more dangerous their foes become, until finally the party finds itself pitted against one such Lord, whose defeat signals their victory…or, just as likely, who will crush their hope and spirits via foul magic and overwhelming power. 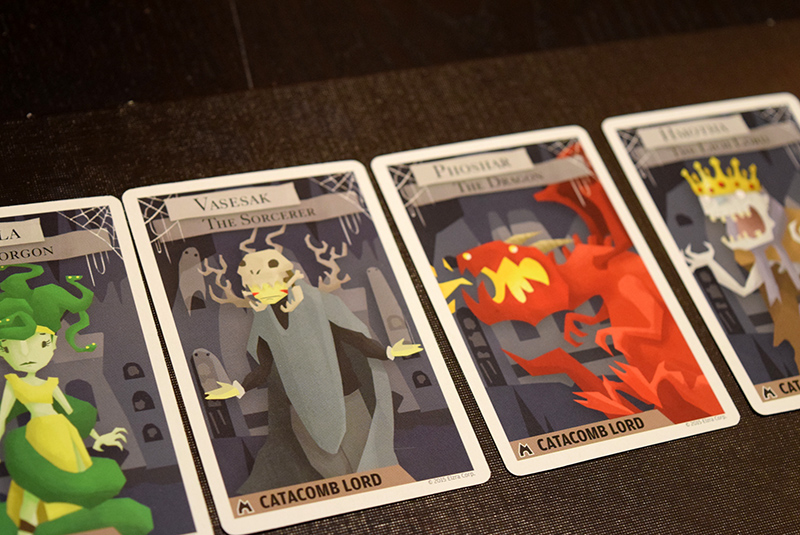 Jess
And if you stop right there, we could be talking about any number of fantasy games.  And that’s neat, because Catacombs has lots of classic flavor that we like a lot!

Andrew
Right, but at this point we’ll start talking about game mechanics, and that’s where things get interesting. 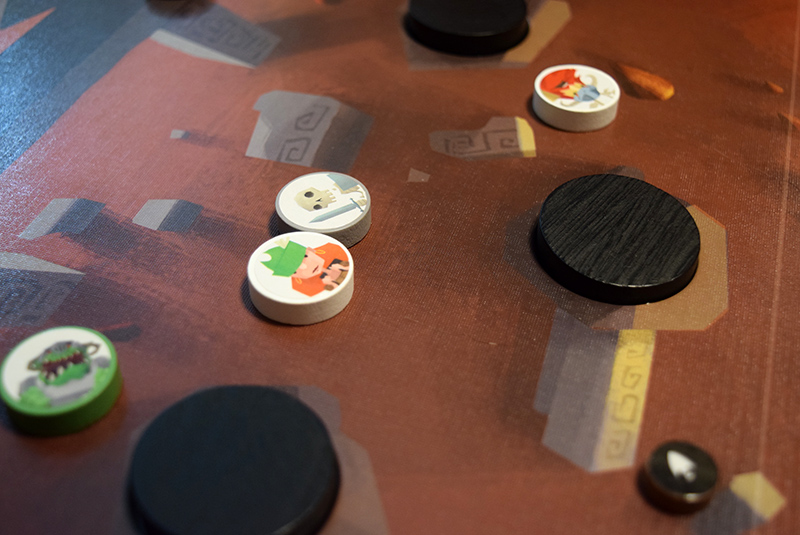 As we mentioned before, Catacombs is a dexterity/flicking game.  And for those unfamiliar with the jargon, that means that the majority of gameplay revolves around players physically flicking their character discs across the dungeon map. 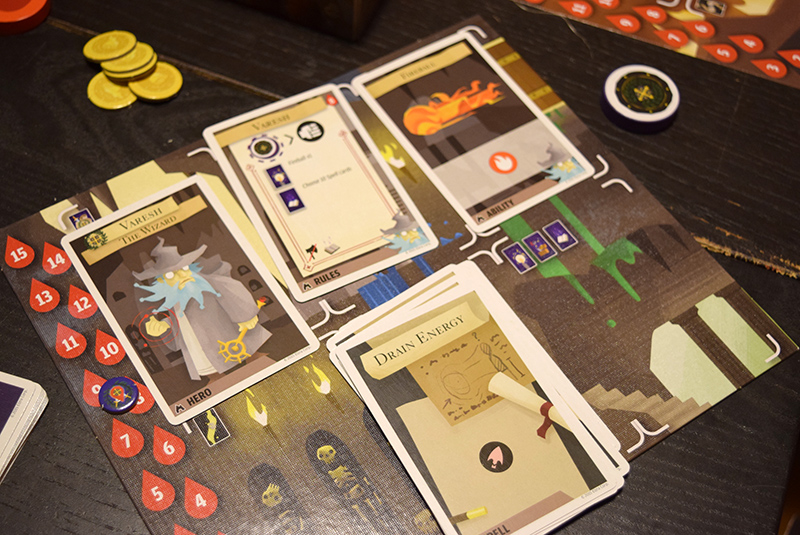 Melee attacks involve sending your character careening into the opposing forces, while ranged attacks and magic spells make use of discs of different sizes.  Each character has its own attack style, like the Thief’s ability to bravely stab and then immediately run away, or the wizard’s magical shield which can be used to buffet enemies around and block their attacks.

Now typically, dexterity games tend to be lighter fare – most are closer to party games than tactical “serious” board games.  So one might be tempted to assume that Catacombs would be extremely rules-light.  That simply isn’t the case.  In fact, when we first started trying to delve into Catacombs, we were sincerely put off by the 27 page rulebook, replete with unique rules and flow charts. 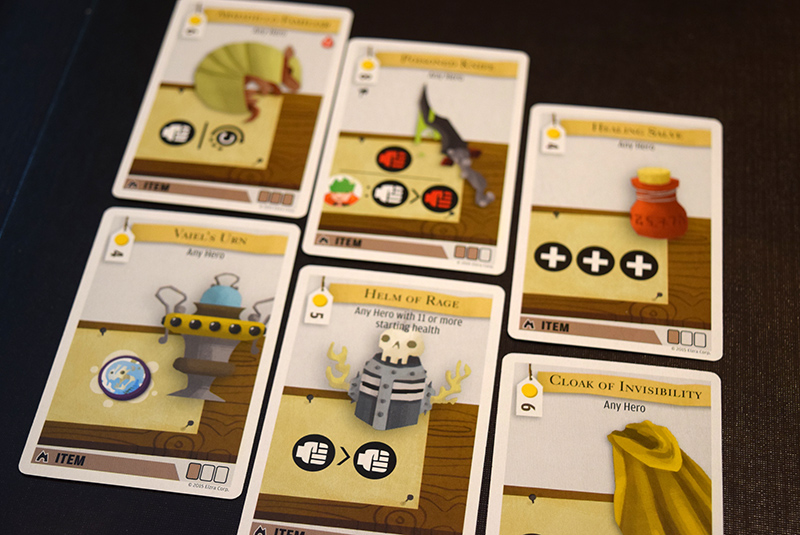 Andrew
But once we got into it, the truth is that Catacombs flows incredibly smoothly.  Turns take moments and every single flick of a disc will have every player engaged.

Jess
Heck yeah!  The dexterity element really keeps the game exciting, since it’s not just about making a strategic decision for your turn, but seeing if you can pull off some crazy bounce shot to take out a couple of skeletons at once, or whatever.  It’s awesome! 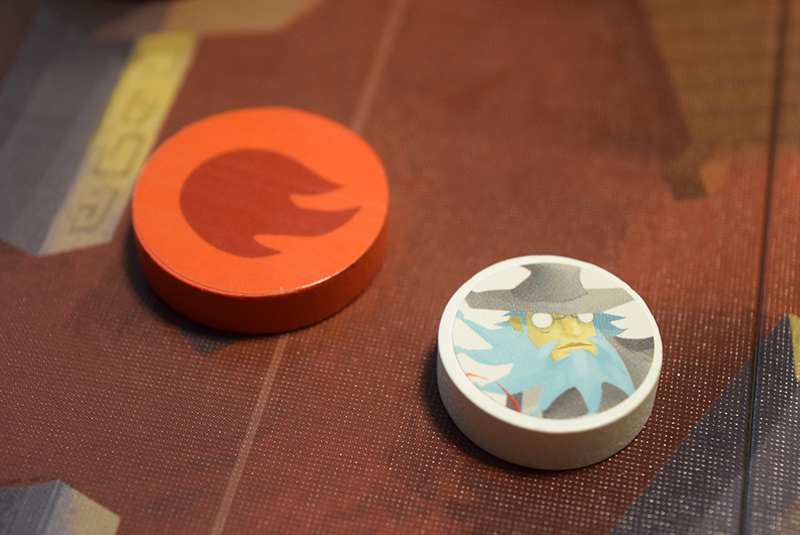 The ultimate goal of most players in Catacombs is to reach the bottom of the dungeon, square off against the Catacomb Lord there, and emerge victorious.  I say most, because in the grand tradition of tabletop roleplaying games, one player will act as the Overseer.

This player will control the monsters, setting up opposition for the party to mow down.  They win if the heroes don’t, and they will use all their flicking prowess to see that the party fails to carry the day.

Andrew
But I have to say, the inherent excitement of a flicking game means that even when I’m playing the Overseer, I care more about getting to see people make awesome shots than actually winning.  And while maybe that’s just my personality, I think Catacombs is such a fun game to play that it will sort of get infectious for anyone who gives it a shot.

Jess
I totally agree, especially given how absolutely gorgeous it is!  The art is so cool!

There is a surprising amount of complexity behind Catacombs’s dexterity-driven gameplay.  Players can amass items, magic spells, familiars, and allies as they delve through the dungeon, while the Overseer will command a host of monsters with unique powers.

At almost every stage, the physical size of discs is used to provide a tactile difference between something like a mechanical beetle and, say, a gelatinous cube (which is literally a giant cube). 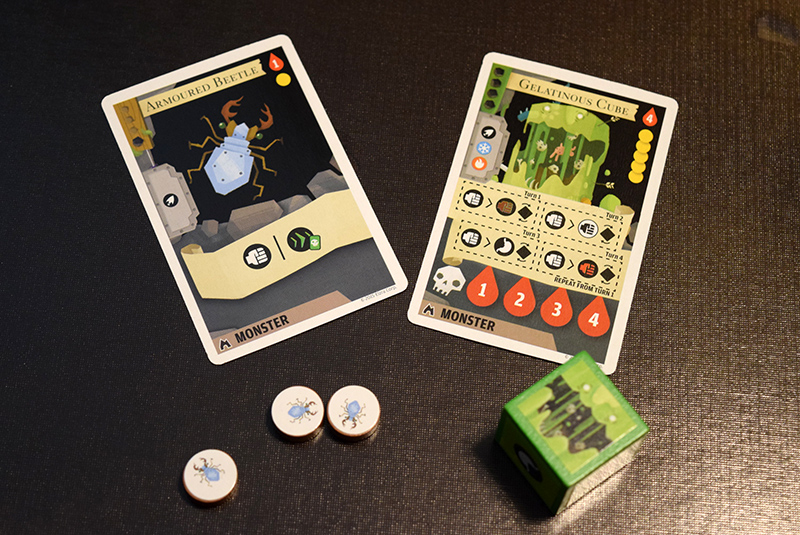 Jess
I think that’s my favorite aspect of Catacombs.  It feels like a dungeon crawl because of the fantastic art and the smart use of components, but the gameplay is pure dexterity and that means it’s quick and engaging.

Catacombs genuinely surprised us.  When we first saw it, we assumed it would be light, simple gameplay with a pasted on theme.  Then, when we started learning it, it became clear that it was a little heavier than we expected, and that the theme was central to the gameplay experience.  And finally, once we were in the groove, that ease of access came back, and while there was definitely strategy to be planned, most of the time we were just flicking discs, laughing, and having a great time. 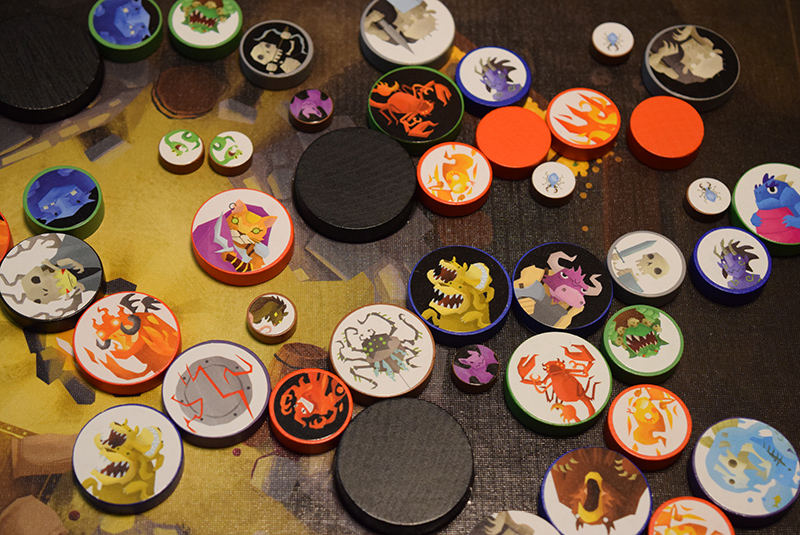 Ultimately, we absolutely recommend Catacombs.  It’s important that players know what they are getting into – this is neither a super serious tactical dungeon delve or is it a lighthearted dexterity-based party game.  What we have here is something truly unique, where the mix of elements absolutely works.  Don’t be intimidated by the rules and absolutely do give Catacombs a shot!