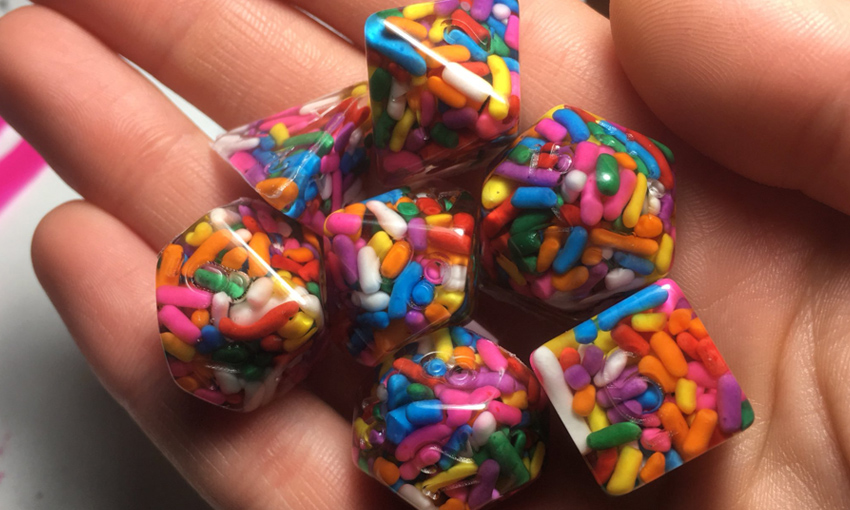 Meeting someone who is passionate about something is always amazing. You can be talking about anything and, as soon as the conversation turns towards their favorite topic, their eyes spark with excitement. For Lauren of Busy Wizard Dice, that topic is crafting. Specifically, dice crafting. 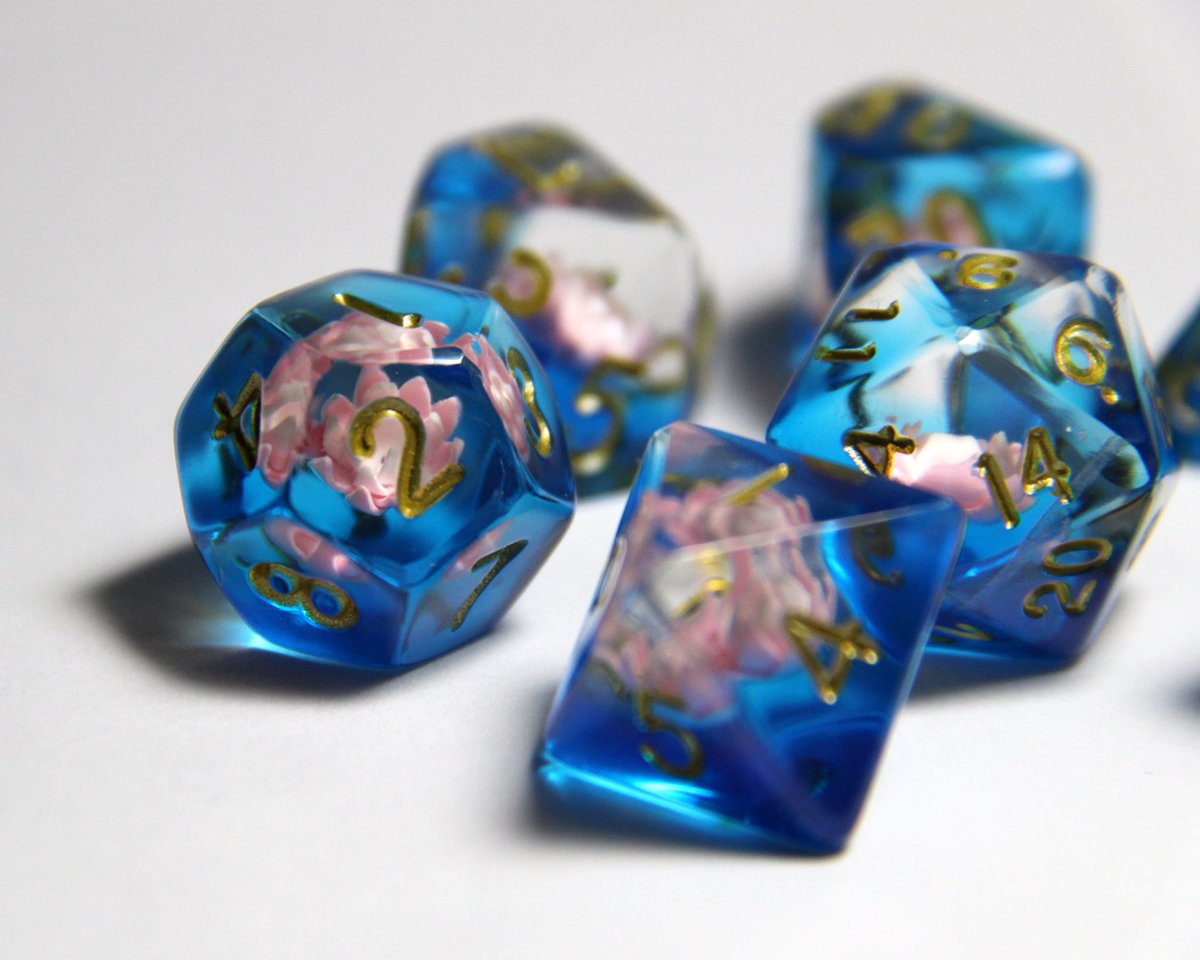 I first came across Lauren’s work via Twitter where someone had commented about her stunning set of Lotus Dice. Tiny handcrafted lotus flowers float in crystal clear blue resin behind the golden numbers of each die. They are a works of art. Smitten with her work, I was curious how Lauren got into making dice and decided to reach out.

Lauren was happy to meet up and talk about her work. As it turns out, she got into the hobby the way many dice-makers do; through playing Dungeons and Dragons.

I started playing D&D and realized that I really liked dice. Because, who doesn’t? I started to want to buy a lot of them which my husband was like ‘lets not’. And I was like ‘what if I started to make them?’

Her husband agreed with the idea and bought Lauren some of the starter materials for her birthday. She got a set of molds, resin, and pigments

I just went running from there. 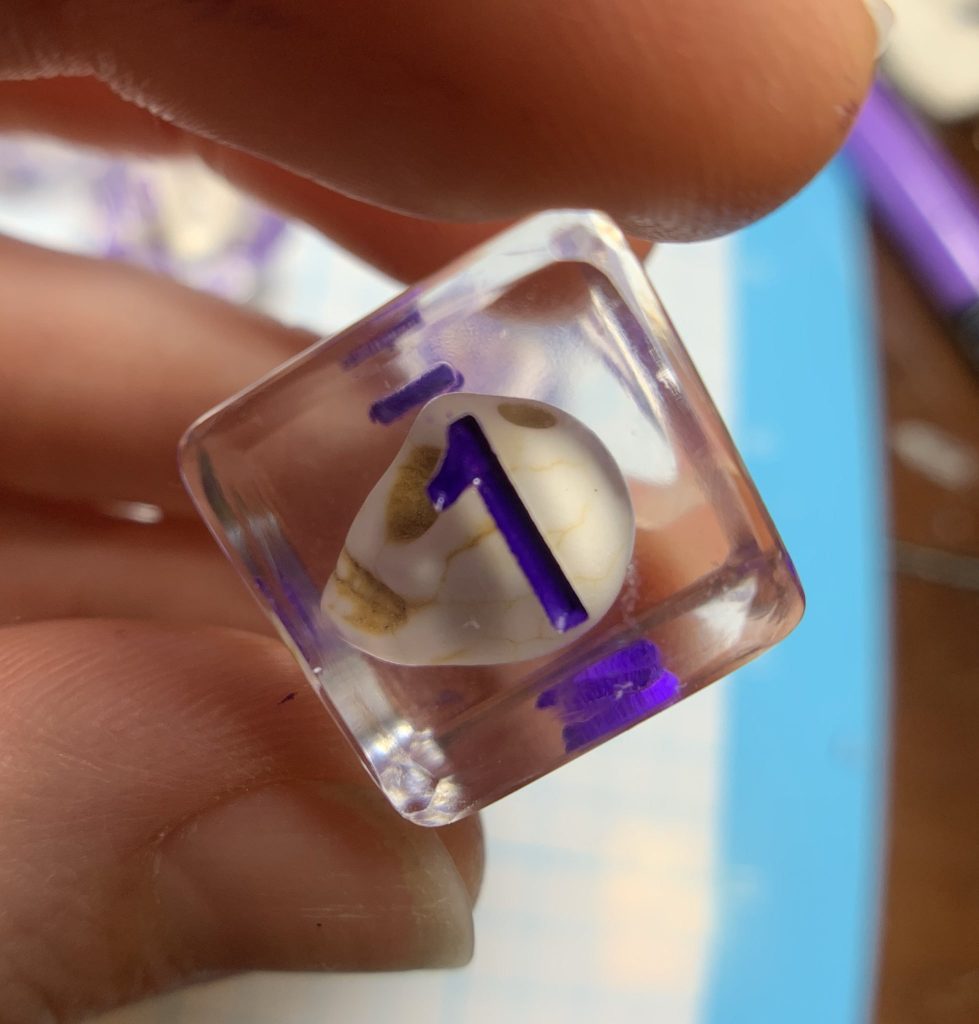 That was in March of this year. Since then, Lauren has been making all kinds of dice; experimenting with glitter, dyes, floating skulls, and more.

It was a way to stop myself from buying a million dice. I just like holding and interacting with dice. A lot of people like having collections. I’m part of some Faceboook groups and they’ll have hundreds of sets of dice and organize them and display them. That’s not what I’m all about. I just want to look at pretty things and then I’ll be done with them. So, this works very well. I look at them. I rate them: ‘these are so pretty!’ and then I mail them off to someone else. 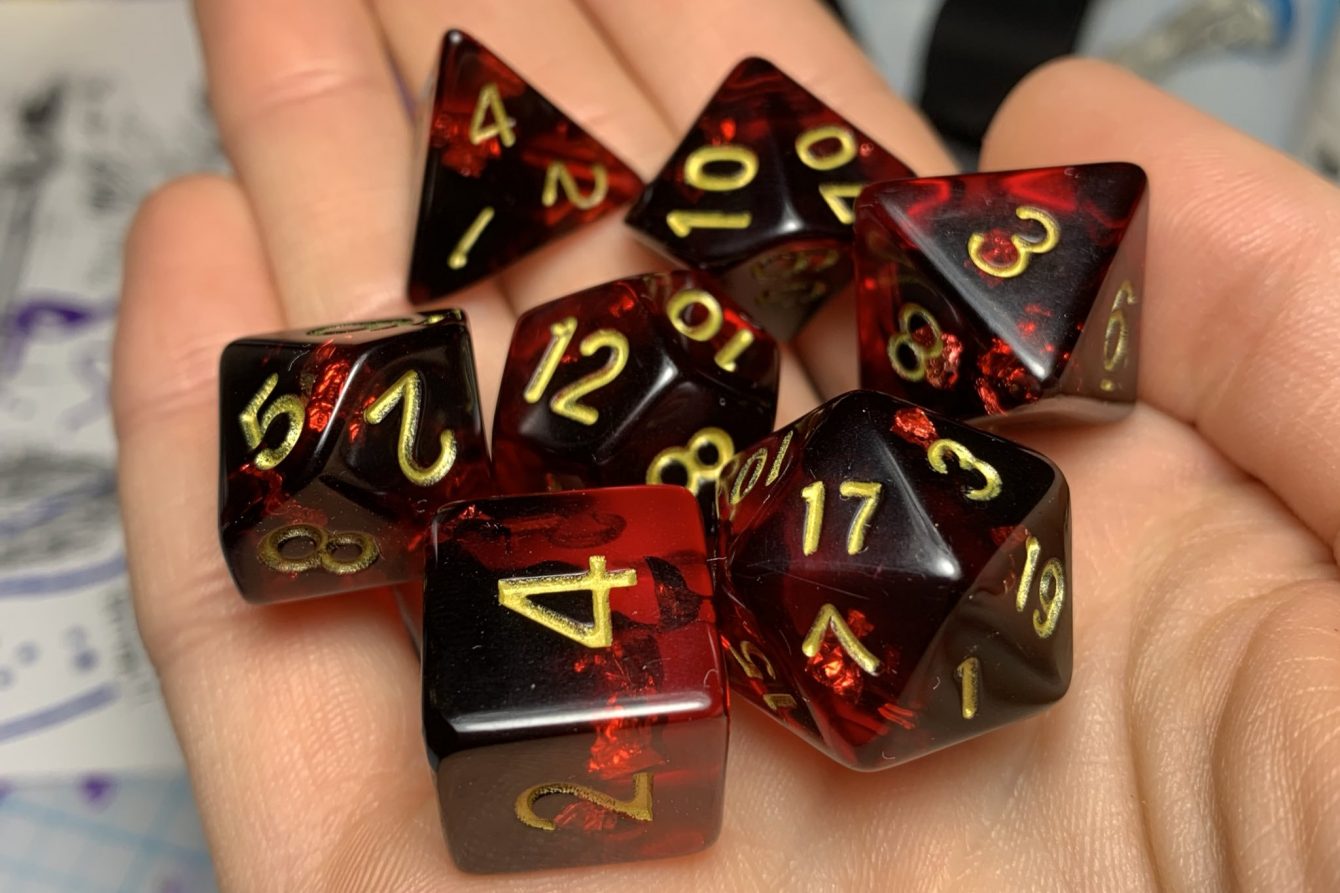 It’s shocking how quickly she picked up the craft. Within a few short months Lauren was already creating gorgeous sets and this she attributes to her love of crafting.

I’ve always been making things with my hands. Before this I did mini painting for Lauren’s Mini’s on Twitter @LaurensMinis, but that did take so much longer. That’s kinda fallen off because all I do is make dice these days. Before that I crocheted a lot. I love cooking. So things where I make things with my hands is very fulfilling to me. I like having an end product. ‘look I’ve done something!’ 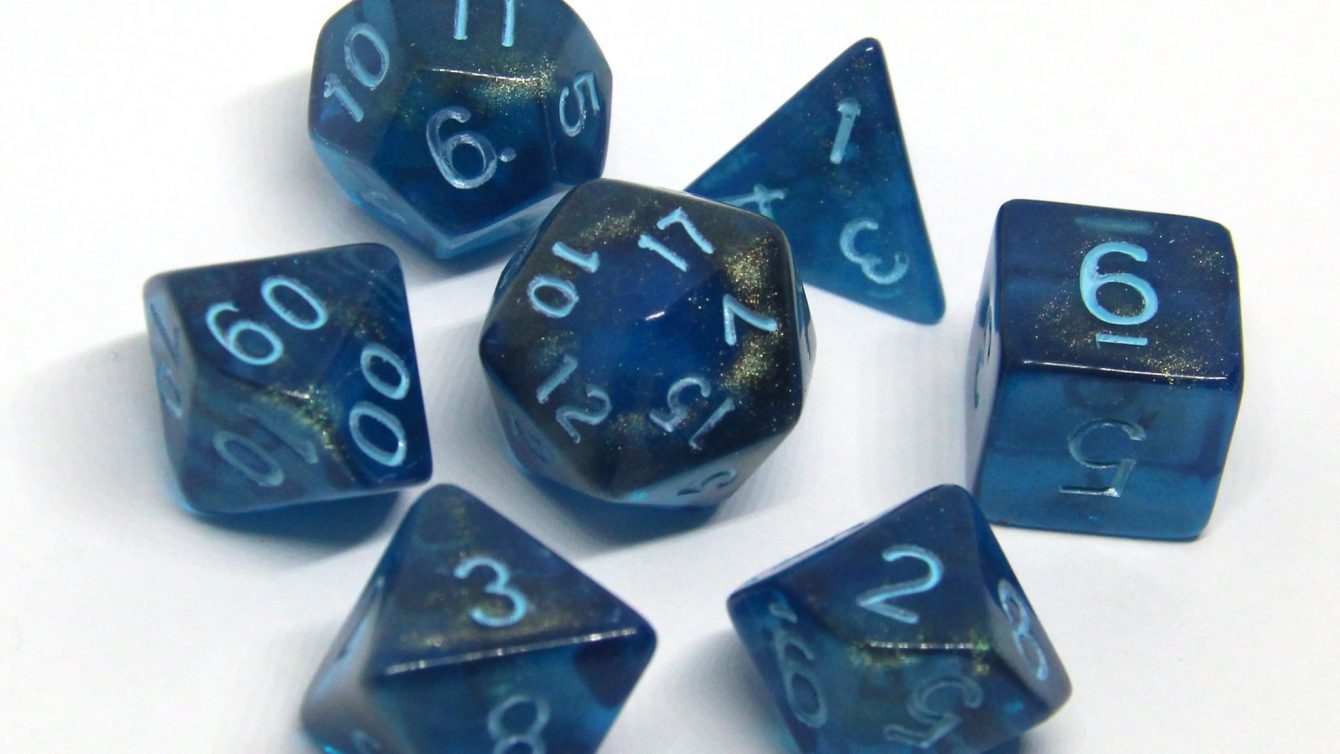 Anything can become Lauren’s inspiration for a new set though she credits her husband with some suggestions that lit the creative spark. Once she has an idea, she gets to work. As I was curious, Lauren detailed some of the process for me.

So basically what I’ll do is I have my 2 part epoxy. I mix equal portions of both to make the resin and I can add pigments to dye it, powders to make it shimmery, or add glitter. All that I do after I mix the two together. Then I have a limited amount of time before it sets and becomes totally unusable. Sometimes I’ll go with an established idea or sometimes I’ll just be like ‘what happens if I put these two things together?’ Then I let them cure for about 24 hours. I put mine in a pressure pot to help squish all the bubbles into nothingness. 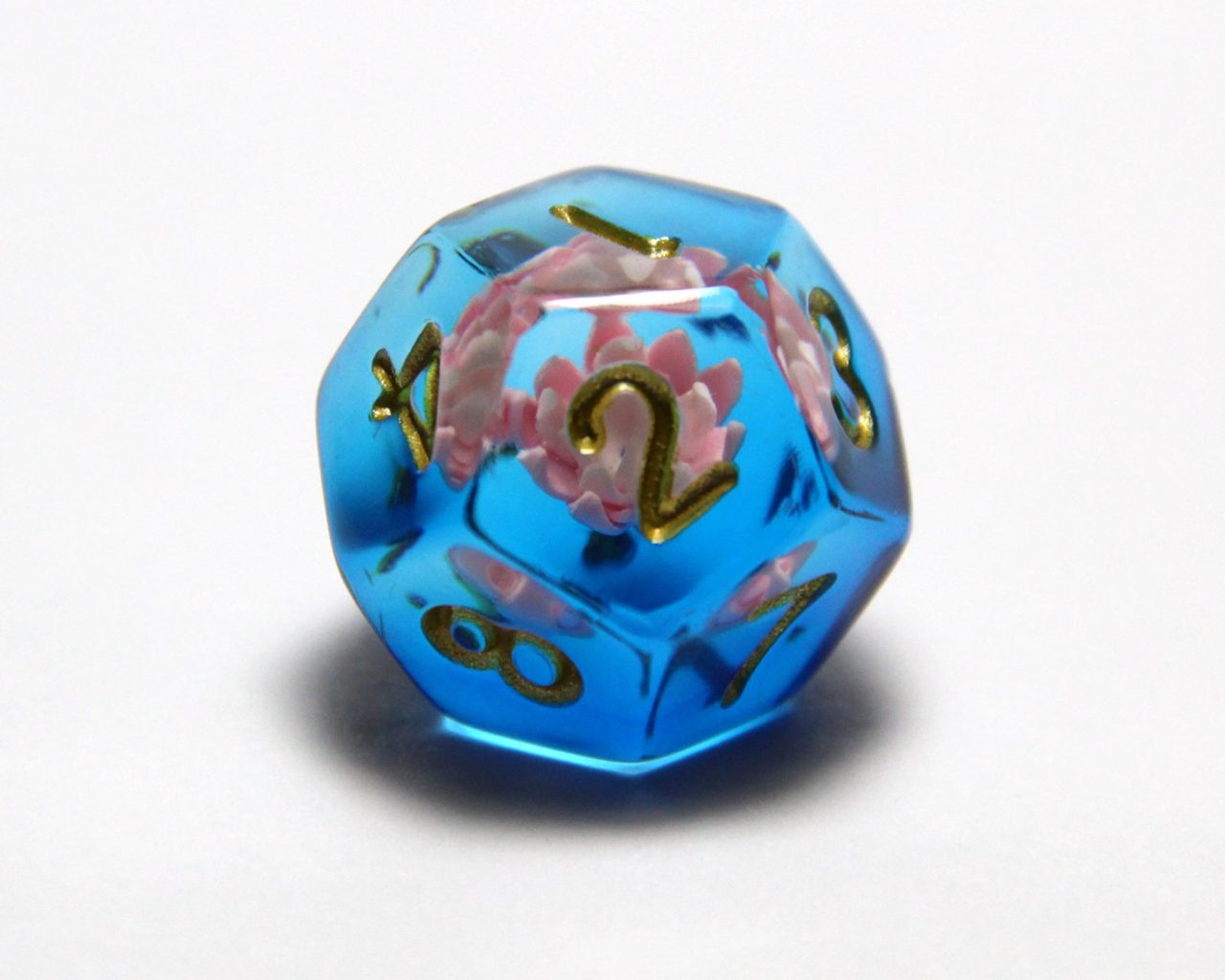 As part of the process, Lauren will occasionally add objects to the resin. For one commission she was tasked with making lotus inspired dice. She usually only takes photos of her commissioned sets with her phone, but the Lotus dice had come out so nicely that she wanted to share. She took some shots with her camera and posted them during a trip to see some friends. Lauren was blown away by the popularity of her lotus dice when she first posted them.

Everyone was like ‘How do I get these dice?’ and I was like ‘I don’t know! I don’t have any more lotuses!’

Getting more was difficult as her supplier hand-makes each flower in the Ukraine. So Lauren has only been able to make limited quantities. Thankfully the flower sculptor was willing to make more though each order takes a few weeks.

She’s making a new batch. Once I get those and get the orders filled I’ll be ordering another set of lotuses. That was a hard set to figure out because the D4 was upside down. It took four separate pours to make one set, but it was fun and now I have a million orders for it. I really liked that one because it was something totally different. it was actually one of my first commissions. 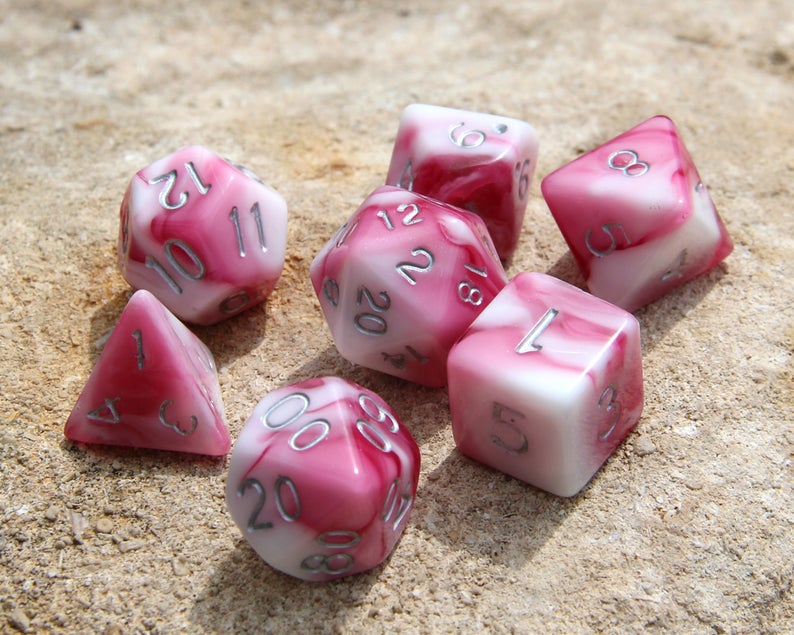 While her lotus set might be very popular, Lauren loves new challenges.

I like figuring out problems and solutions. I don’t repeat a lot of what I do because I’ve already figured out how to do it. I tend to keep bouncing from thing to thing to thing.

I can’t wait to see what Lauren comes up with next. If you are interested in learning more about dice-crafting, Lauren pointed me to a wonderful Facebook group called Dice Making Discoveries, which provides educational materials on creating your own dice and provides a community of artisans that are always willing to help out a new crafter. Make sure to stop by Lauren’s Etsy shop Busy Wizard Dice and her Twitter to see what she’s currently working on.