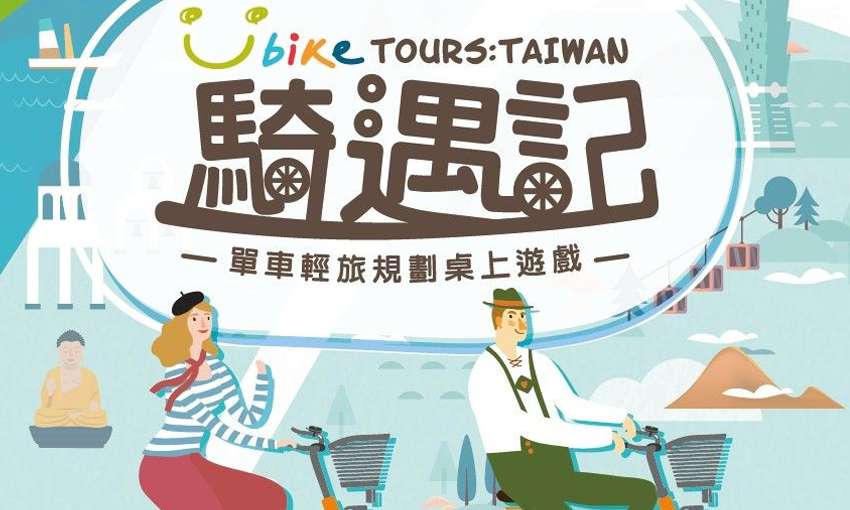 UBike Tour: Tawian is a set collection game that dresses up its sometimes-thinky, occasionally nasty push your luck mechanics with beautiful art and engaging presentation.  But don't let the pastoral artwork fool you - there's strategy to every card pull, and plenty of opportunity to have your best laid plans cut right out from under you by other aspiring cyclists.

Andrew
In UBike Tour: Tawian, players will compete with each other to plan and enjoy a bike trip across the titular island.  They will do so by engaging in a simple push your luck mechanic, where cards are added to different routes, which players can then claim and add to their trip.  With great art and straightforward mechanics, UBike Tour: Tawian is definitely light-hearted, but is it really as relaxing as it seems?

Jess
Not if your fellow bikers have anything to say about it! 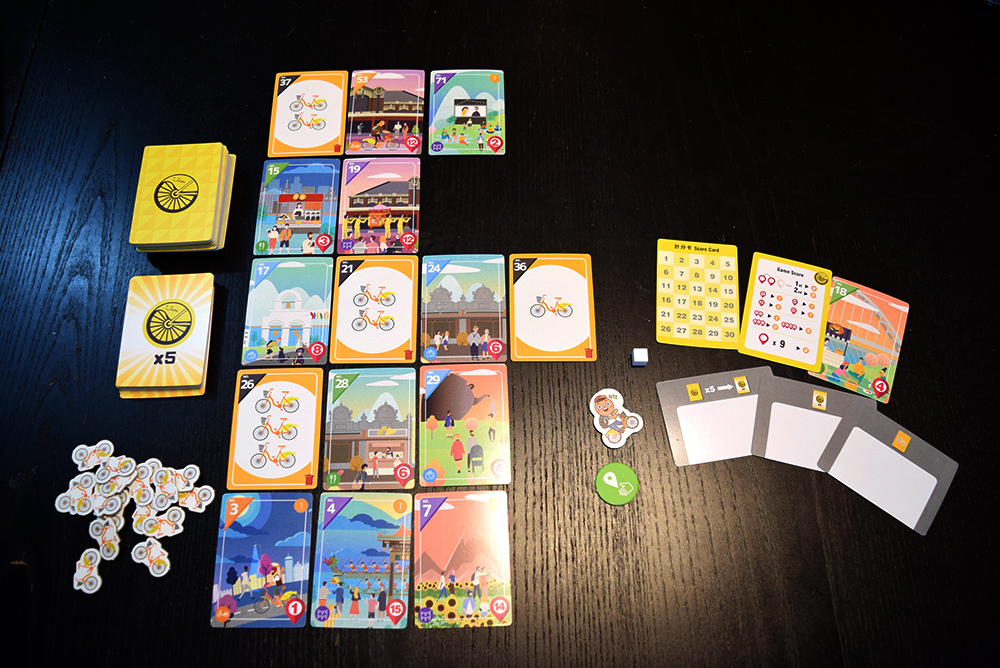 We received a copy of UBike Tour: Tawian for review.  We intend for this review to be a part of a series of articles intended to highlight some great games that aren’t typically in the US distribution ecosystem.

Each turn, players in UBike Tour: Tawian have a simple choice – they will either draw 2 cards to add to the available rows, or they will claim all the cards in a single row.  Each row is composed of bike cards and scenery cards, and as cards are added to the rows, they are placed in ascending numerical order.  Any cards which can’t be placed (because they are lower than all possible rows) get passed to the next player, to eventually be turned in for opportunity cards, but more on that in a moment. 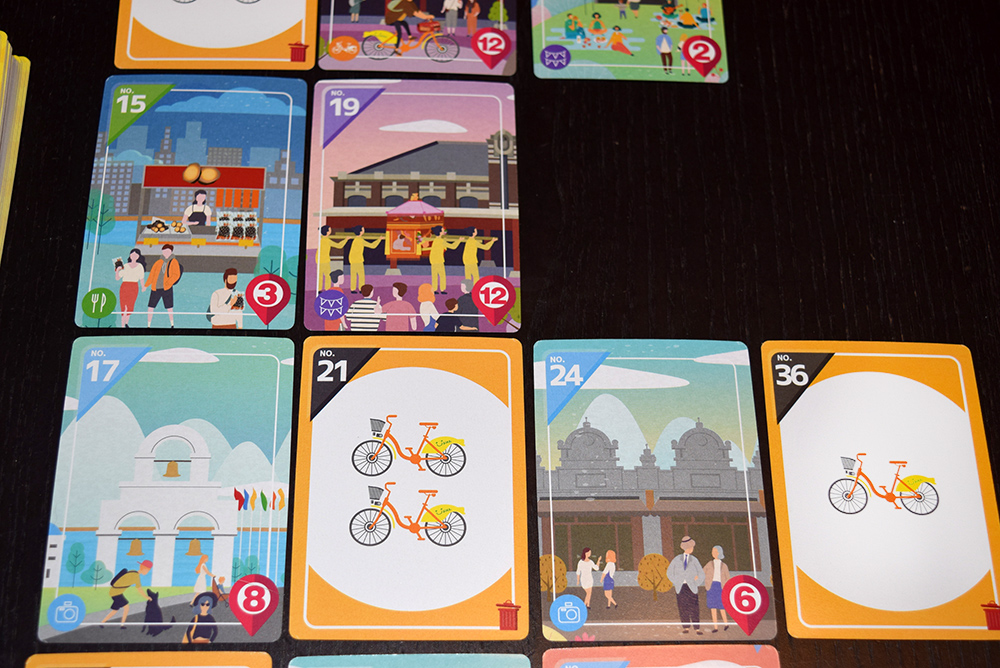 On any turn, instead of adding cards to the rows, the active player can instead claim all the cards of a single row.  Bike cards get added to their supply, and they can then optionally choose a single scenery card to add to their trip, to the right of their most recently placed card. 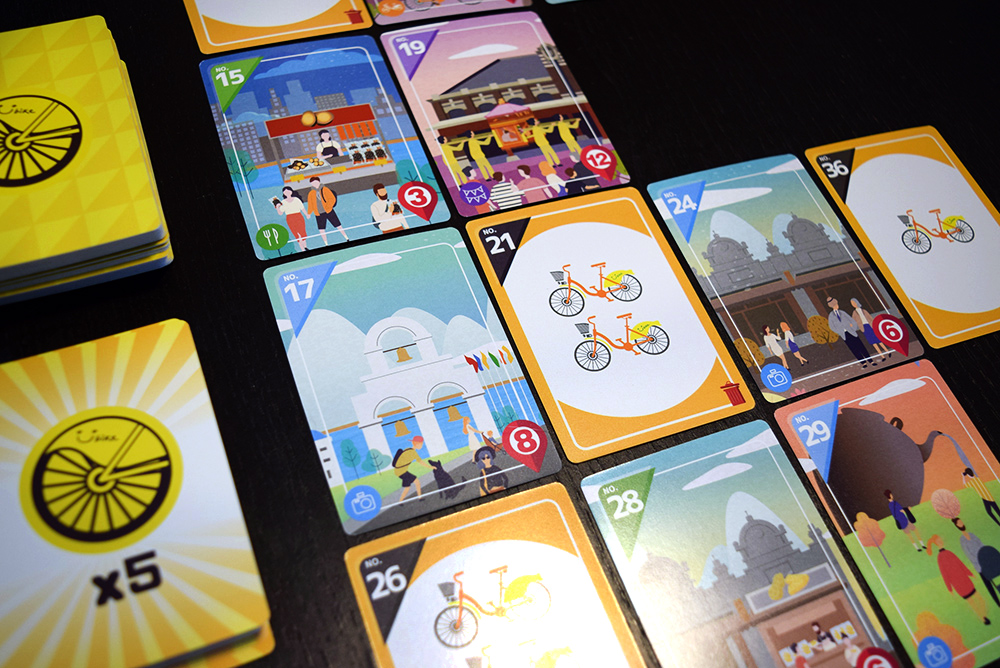 Each scenery card has a distance value on the bottom.  Traveling between scenery which is within 1 distance of your last location is free (so from distance 5, you could travel to 4,5, or 6 without issue), but for distances greater than that, you will need to spend bikes equal to the distance traveled. 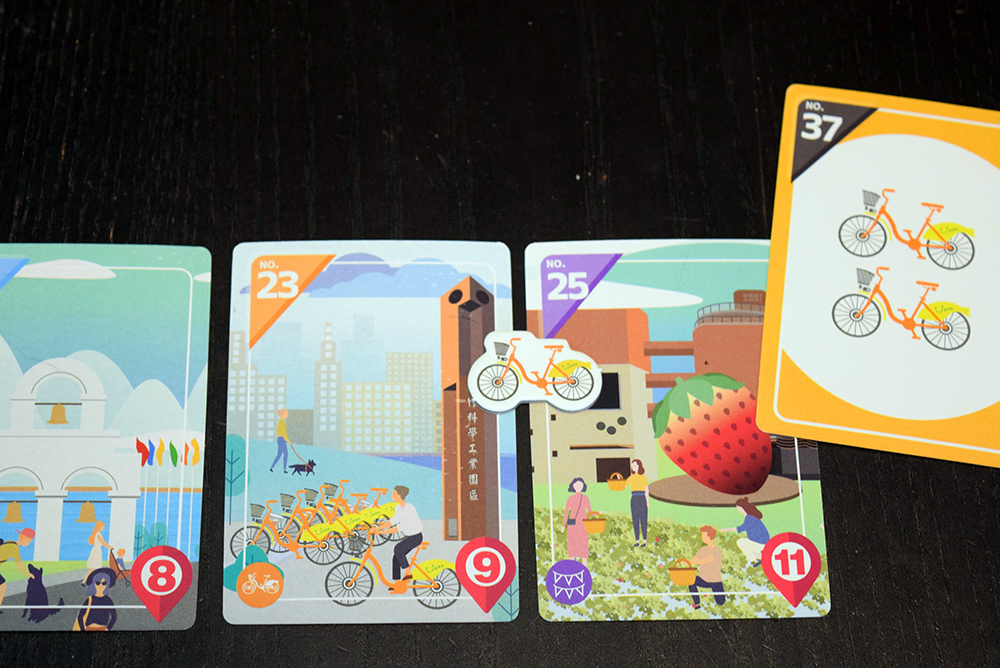 The cards you don’t add to your trip go into your reserve (along with cards you may have gotten when other players couldn’t place them), and as soon as you have 5 scenery cards in your reserve, you trade them in for Opportunity cards.  These are mostly end-game scoring cards, but some are extra bikes or can be spent to add an additional card to your route when you claim a row. 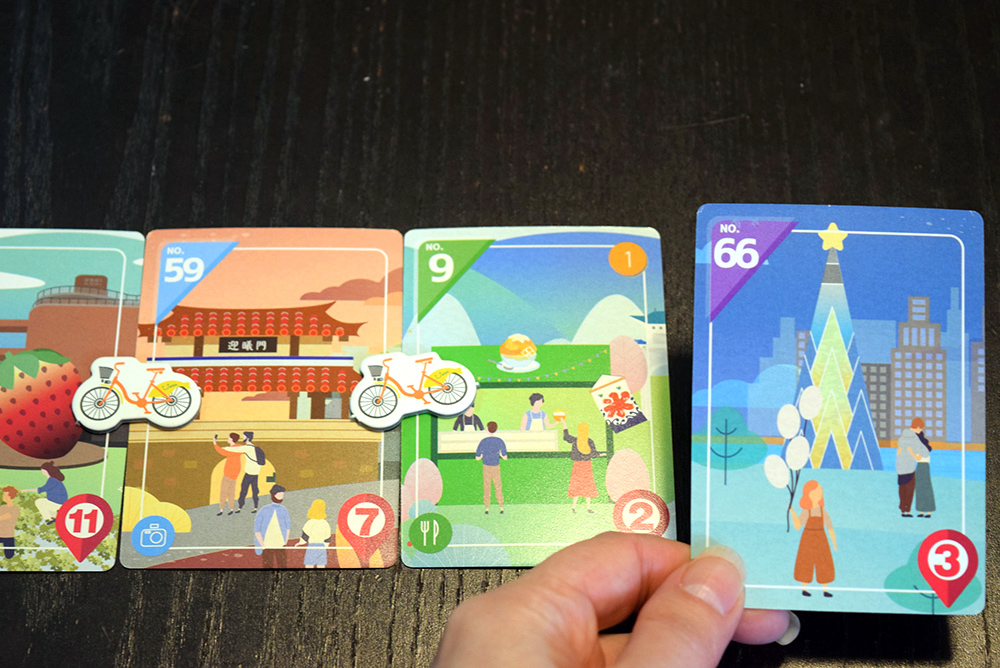 UBike Tour: Tawian continues until a player adds their 9th card to their trip.  At the end of that round, players will score their journey, including points for distance traveled, very high or very low cards, duplicate card values, and other bonuses. 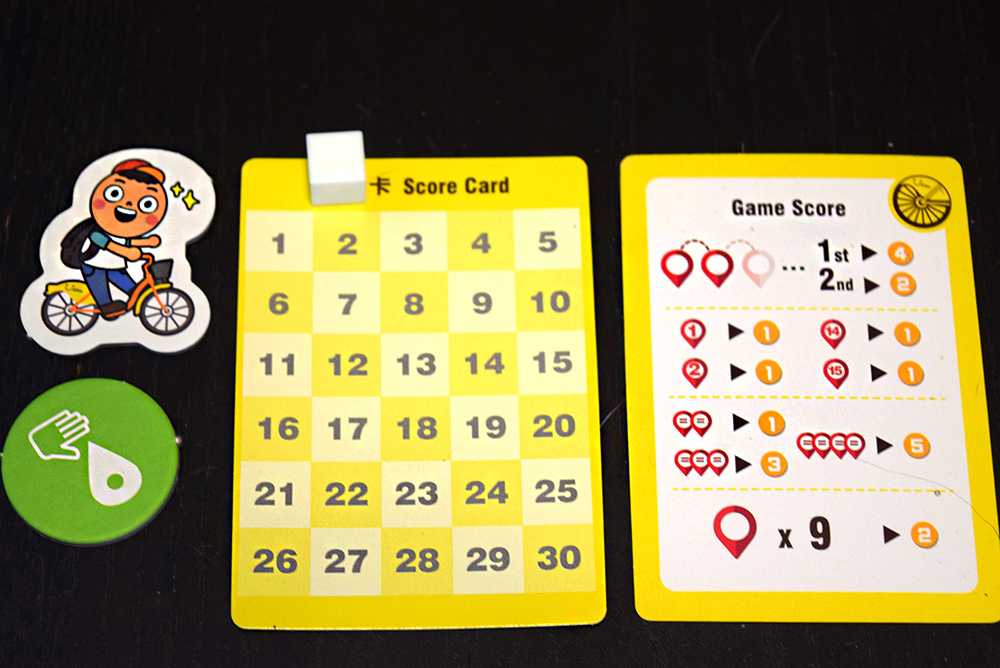 Planning a bike trip through the countryside of Taiwan isn’t immediately the most exciting idea for a board game.  Don’t get me wrong – the idea of doing exactly that sounds like an absolutely fantastic vacation.  But as the premise for a game, does it really evoke the high stakes of, say, railroads or medieval European farming. 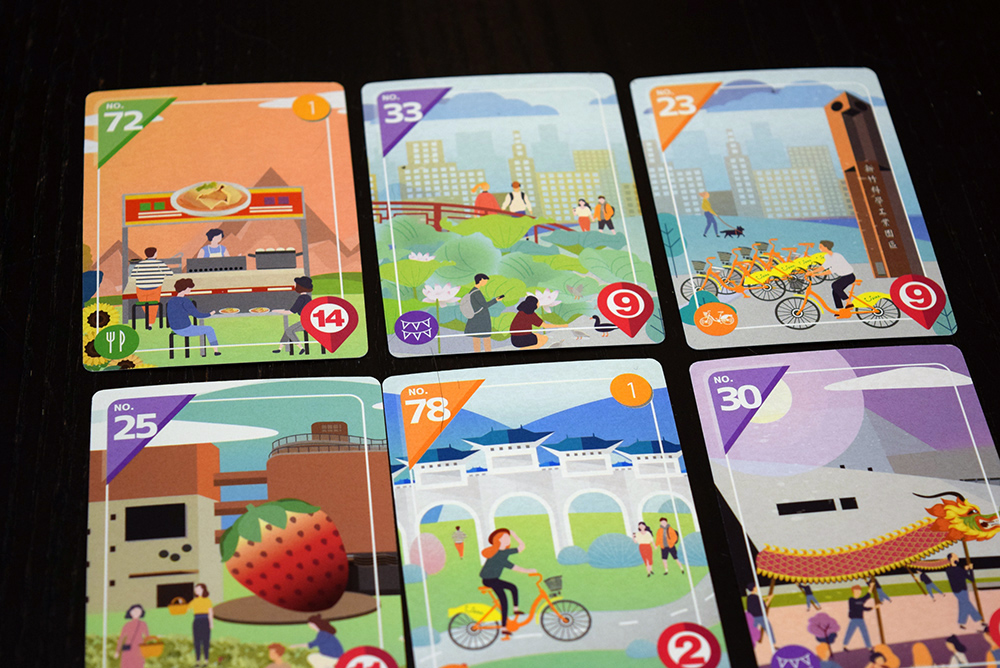 Jess
I love it too!  But not just because the cards are pretty – I think the push your luck elements are a lot of fun. 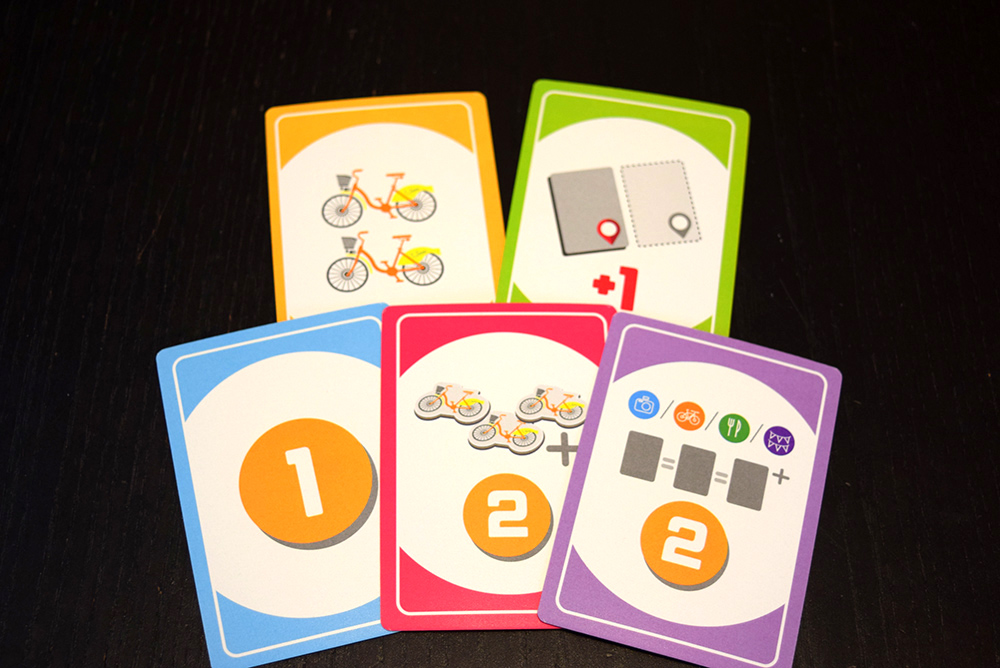 Lots of games that feature a push your luck mechanic threaten that if you go to far, you’ll ‘bust’ or somehow lose a turn, etc.  In UBike Tour: Tawian, the stress comes not from the threat of drawing things out too far, but rather the danger that one of your fellow players is going to grab the row you really, really wanted!  It creates a unique kind of tension in a game that otherwise has no player interaction at all, and it makes for surprisingly strategic moments in an otherwise light, breezy game. 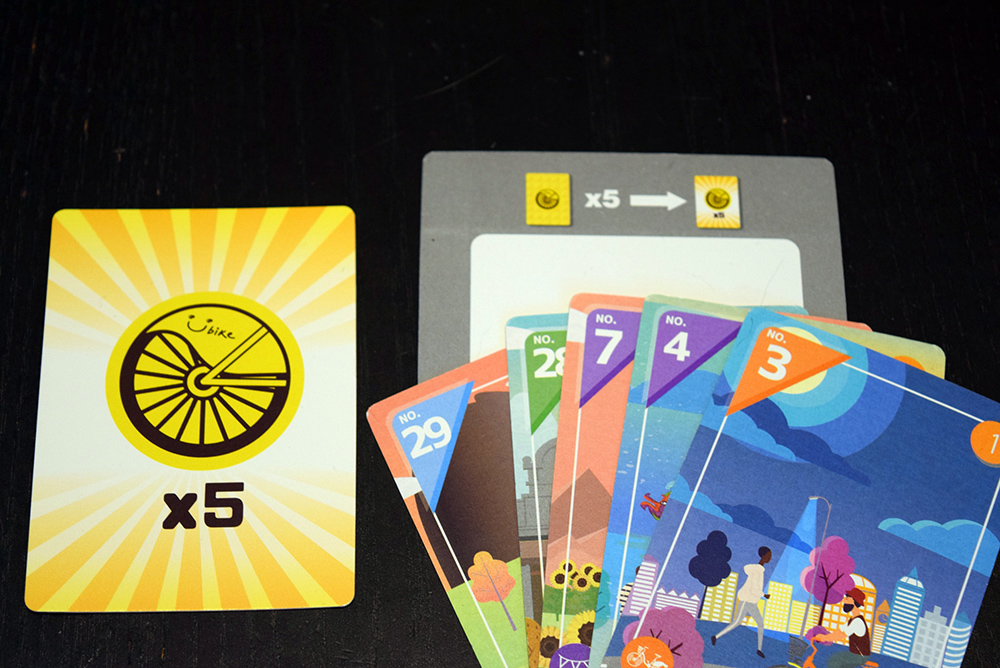 Andrew
I have to say, I really liked UBike Tour: Tawian.  From the theme to the mechanics, I think this is a game I could introduce to a pretty wide audience of folks, and I think it would go over well.

Jess
I agree for sure, especially since it can get surprisingly thinky in places.  While a lot of your opportunities come from the luck of the draw, planning ahead on how to make big swings between distances, or collecting sets of scenery types for bonus scoring, can actually take a bit of foresight and, of course, luck. 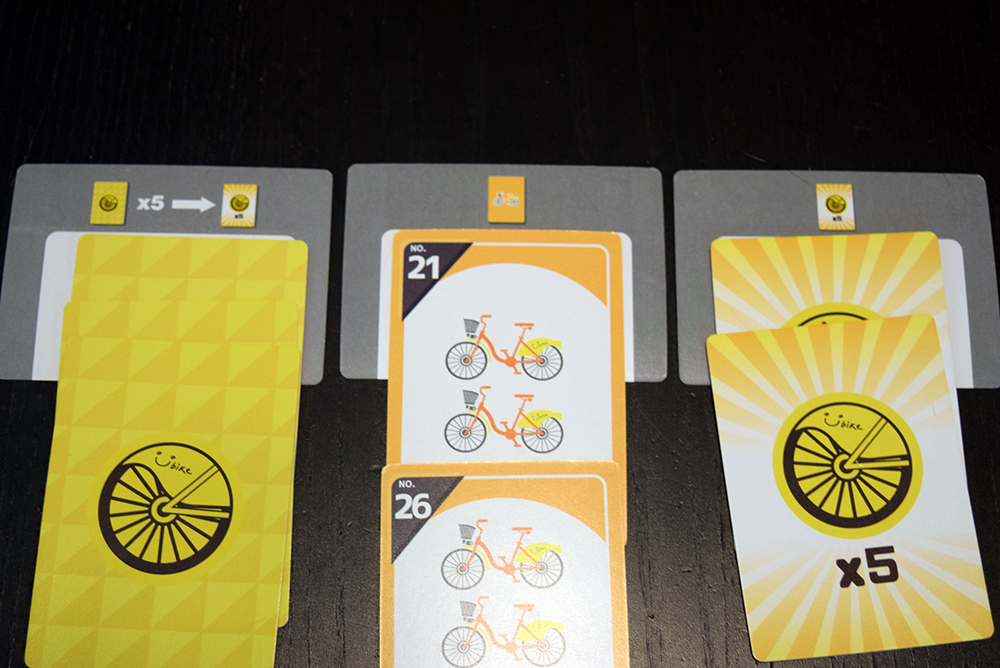 Andrew
And then there’s that moment that you manage to pull exactly the card you need…and someone else steals it out from under your nose.

UBike Tour: Tawian is a fun beautifully-made game.  It doesn’t currently have a US release, but for those of you lucky enough to be at Essen, you will have a chance to snag it there, and we’re sure wider distribution will follow!