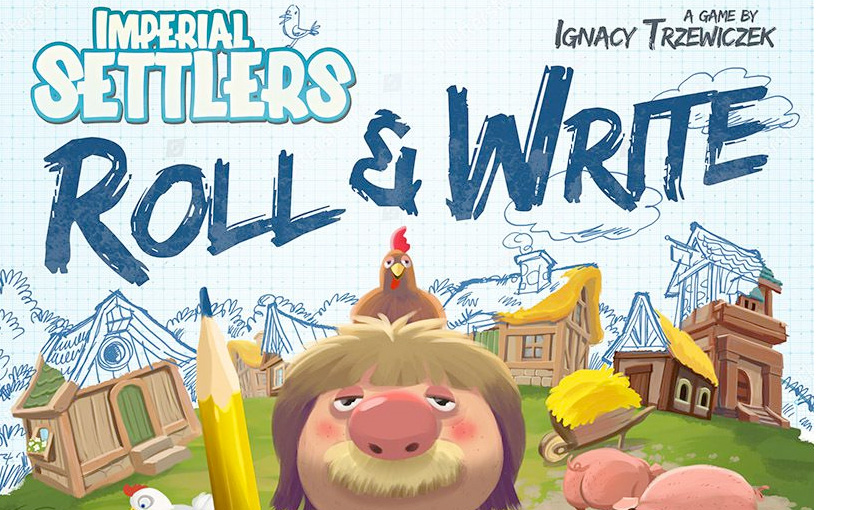 Imperial Settlers: Roll & Write is a surprisingly thinky, attractively presented game. While we're used to Roll & Writes being pretty breezy games, this one is definitely more of a strategic puzzle than most, and we loved that!

Jess
Roll & writes are one of my favorite genres of games. I find it very satisfying to check off boxes and fill the page with little point-scoring doodles. Imperial Settlers: Roll & Write is less about doodles and more about point-scoring, but it definitely hits that same sweet spot and combines a handful of clever mechanics in an engaging way.

Andrew
How does it compare to it’s sibling game, Imperial Settlers?

Jess
I have no idea!  Never played that one.  So this review is entirely on Imperial Settlers: Roll & Write’s own merit. 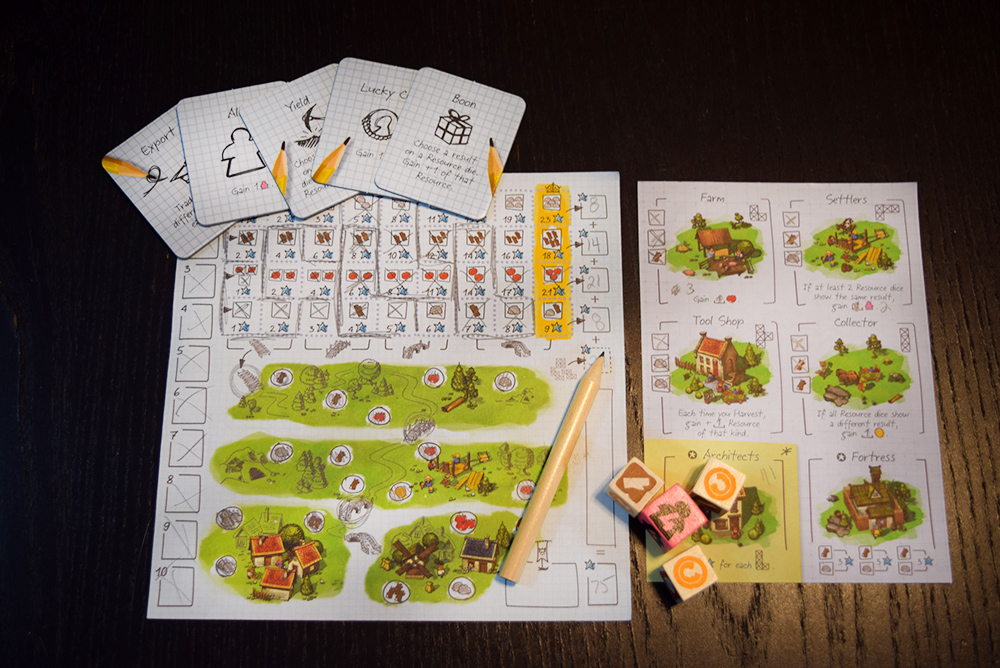 Imperial Settlers: Roll & Write is one of the more thinky roll and writes ever I’ve come across – every roll provides you with multiple choices that compound on themselves. Like most games in this genre, you’ll be rolling a set of dice at the beginning of each round and, based on the roll, marking off sections of the player sheet to score points. 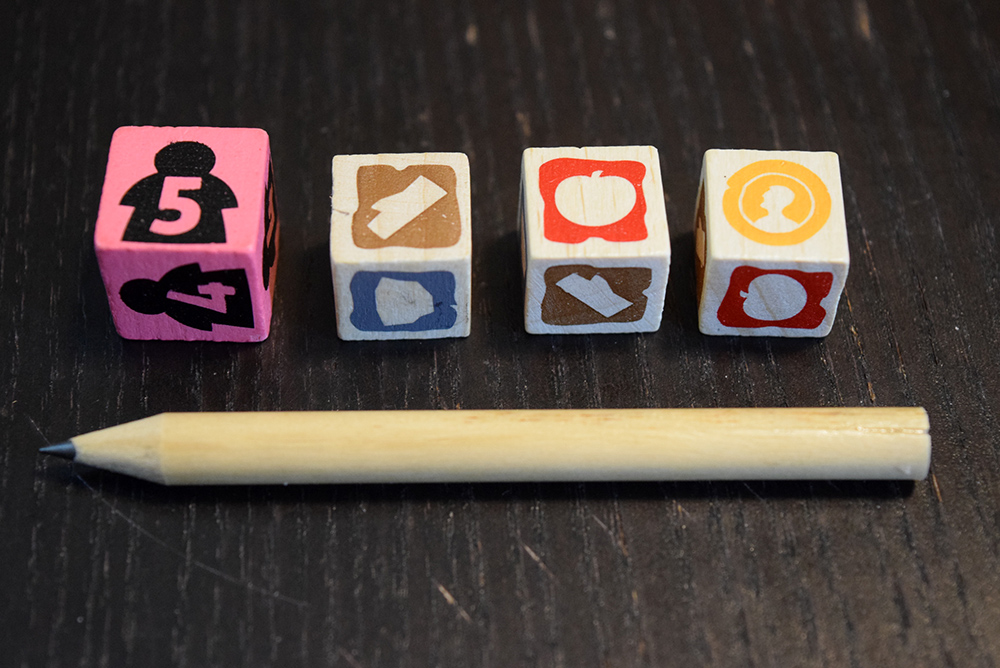 Imperial Settlers: Roll & Write gives you 3 resource dice and 1 action die, and the lead player will roll all 4 at the start of each round to create the shared pool all players will use. The resource dice give you stone, wood, food, and gold (the wild resource). The action die tells you how many actions you have this turn. You’ll use your actions to harvest (crossing off a harvest space to gain resources) or build (using resources to build structures). The buildings you construct give you advantages such as extra resources, actions, or scoring opportunities. 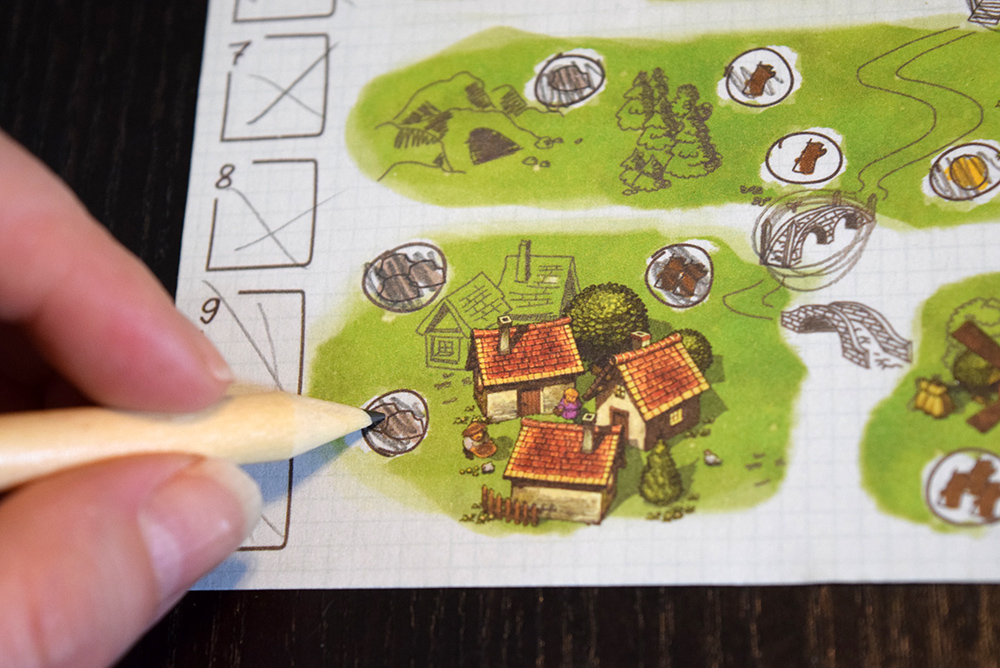 Once the dice are rolled, starting with the lead player for the round, everyone will get a favor token.  These give you a unique benefit for the round, potentially helping you form a strategy for how best to use the dice that were rolled. 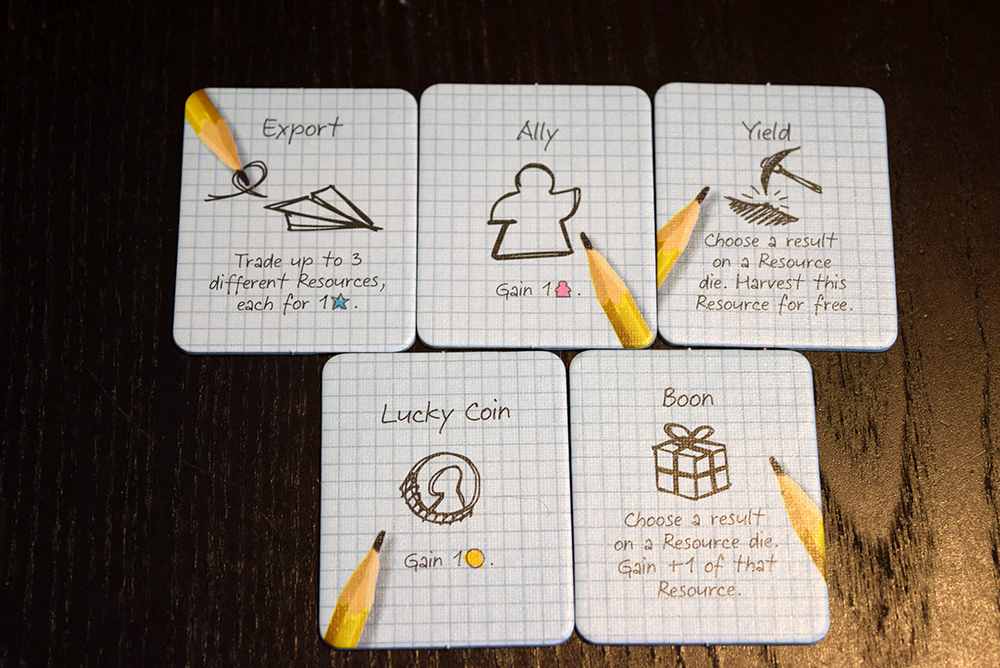 Considering that you gain points from almost everything you do, it might sound like you can’t go wrong with anything you pick to mark off on a given turn.  But the fact is there’s lots of strategy in this little game and, as I said before, every successive round will provide you with more and more to consider as you play. Do you use your resources to unlock more harvesting spaces or do you build another farm to get extra tomatoes each round?  I mean, how many tomatoes do you need?? 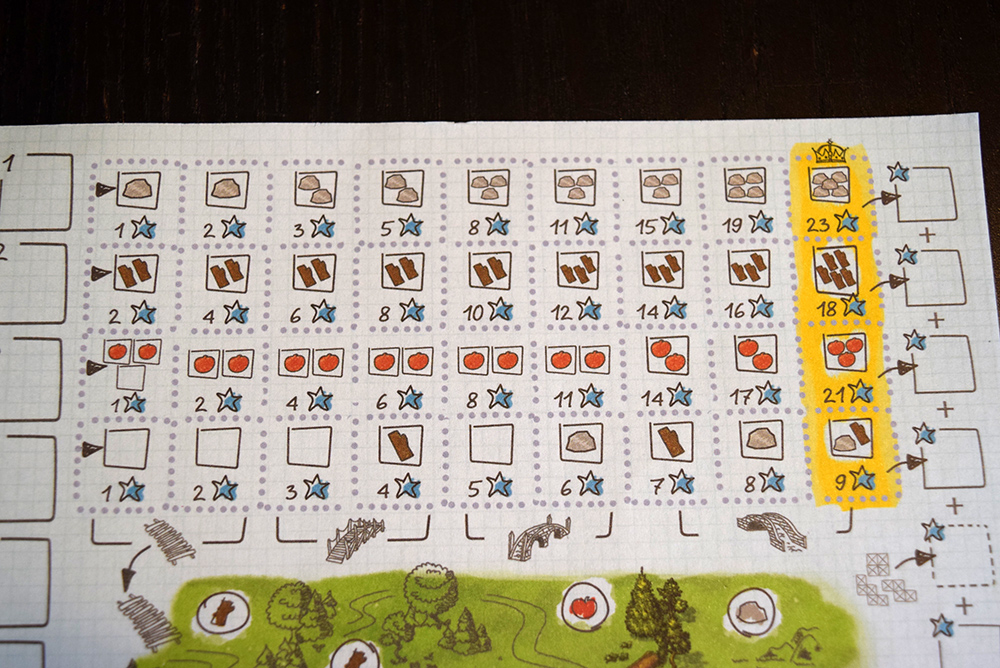 But even though Imperial Settlers: Roll & Write is a more strategic than many Roll & Writes I’ve played, the randomness of the dice do limit the amount of planning you can do.  You might have grand plans for expanding your empire, but that’s dependent on the dice giving you the actions and resources you need.  Like I said before, everyone shares the results of the dice roll, so your choice of favor token and the order in which you get your buildings can have a big impact on how well you do compared to your fellow imperialists.

Adjusting your strategy on the fly is a big part of Imperial Settlers: Roll & Write, but no matter what you do, you’ll only have 10 rounds to make the best empire you can manage! 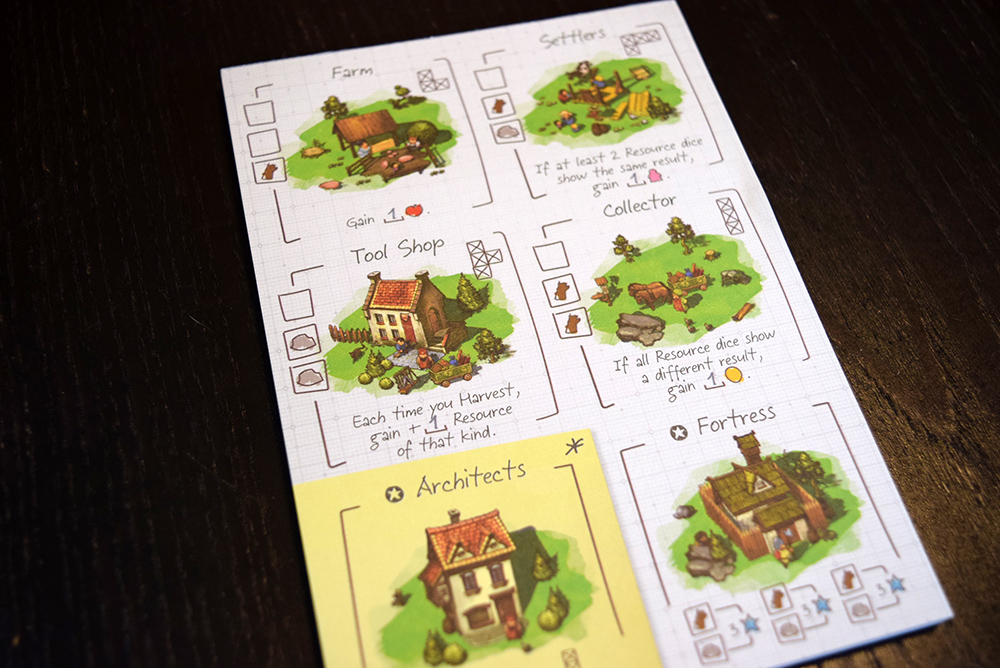 You can add even more variety to Imperial Settlers: Roll & Write with the addition of the ‘advanced rules’, which allow for the creation of settlements.  As you mark off sections of your sheet, you can outline groups that match the shape of a completed building blueprint. You can make multiple settlements of the same building type, increasing that building’s bonus each time.

Jess
I found that the advanced rules were easy to integrate and made the game more interesting as not only did I now have to balance what I was building when, but also where.  It’s just another way that Imperial Settlers: Roll & Write adds strategy to its Roll & Write roots! 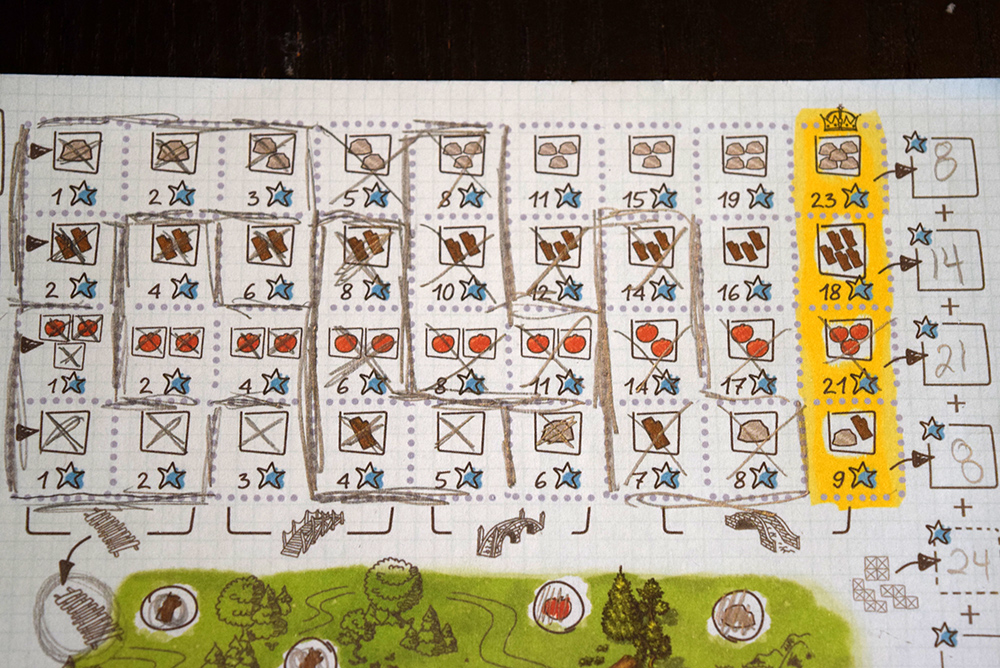 Overall the game feels tight. There will be a lot that you want to do in order to build up your engine, but with just 10 turns, there isn’t enough time to do everything.

Jess
That said, I still really like Imperial Settlers: Roll & Write – it’s not the breeziest R&W game on my shelf, but it’s engaging and puzzly and perfect for when you’re in the mood for something just a little more complex than other games of its kind.

Andrew
It doesn’t give you a huge decision space, but it does give you a lot to think about. Like you say, it’s a roll and write for someone who wants a lot more depth and strategy that someone might assume could be found in that style of game, and I really enjoyed it!

Imperial Settlers: Roll & Write was a surprise hit with us; not so much surprising that it was good, but surprising that it managed to squeeze in just enough strategic gameplay that it was more filling than your average filler without needlessly overstaying its welcome.  It’s well-tuned and fun to play, and we definitely recommend it!