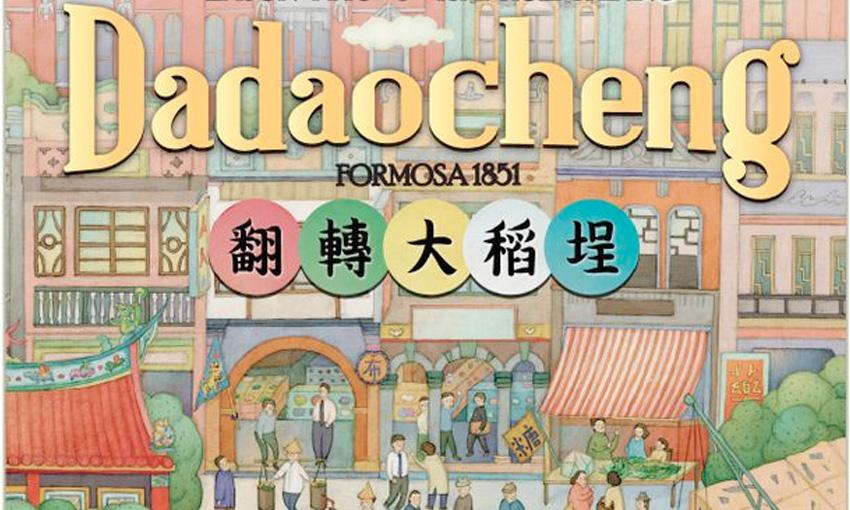 Dadaocheng (2nd Edition) is an extensively overhauled re-imagining of the original (which we absolutely love).  Somehow even thinkier than before, this version of Dadaocheng is a tighter experience overall, where canny strategy is absolutely necessary to make the most out of your very limited turns.

Andrew
In 2016, we reviewed the original Dadaocheng and found it to be a very enjoyable, puzzly challenge that worked best at 2 players and definitely deserved more recognition outside of Taiwan.  And now (practically as I type), at the 2019 Essen game convention, the folks at Soso Studio are releasing a new version of Dadaocheng.  How does it compare to the original?  Is it worth getting if you never heard of it before?  And is it worth considering if you already have the first?  Let’s take a look and find out! 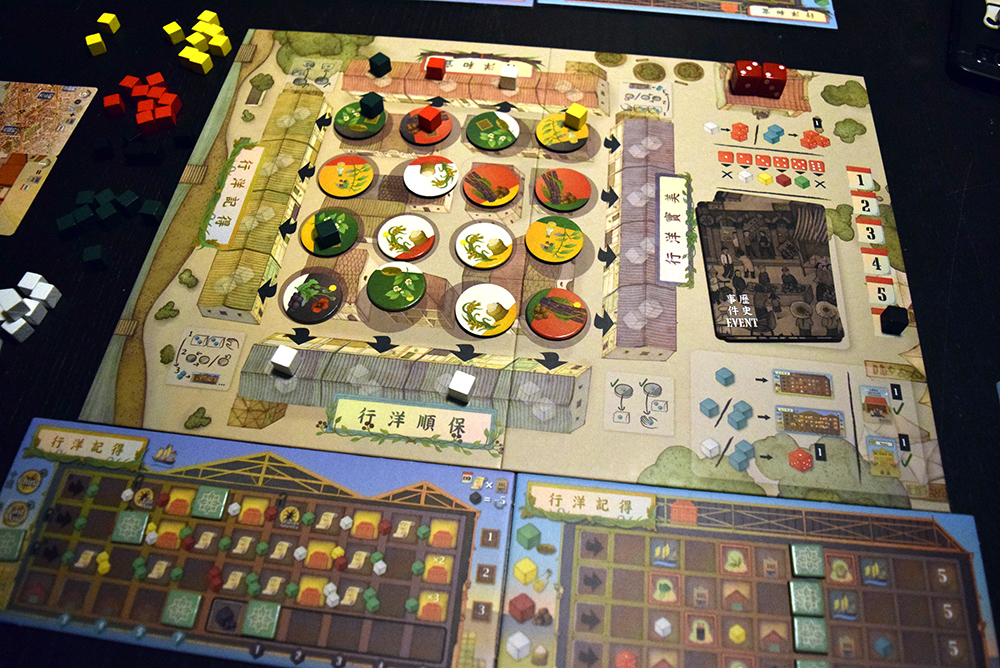 We received a copy of Dadaocheng so we could write this review.

Now, I don’t mean for this review to only be a direct comparison between the two versions – after all, plenty of people might not have discovered the hidden gem which was the original.  So we’re definitely going to tackle Dadaocheng on its own merits.  But for those who have played the first, it should simply be said that while the second edition of Dadaocheng has lots of the same DNA, what we have here is, in almost every major way, a totally new gameplay experience that runs off the same core engine as the original. 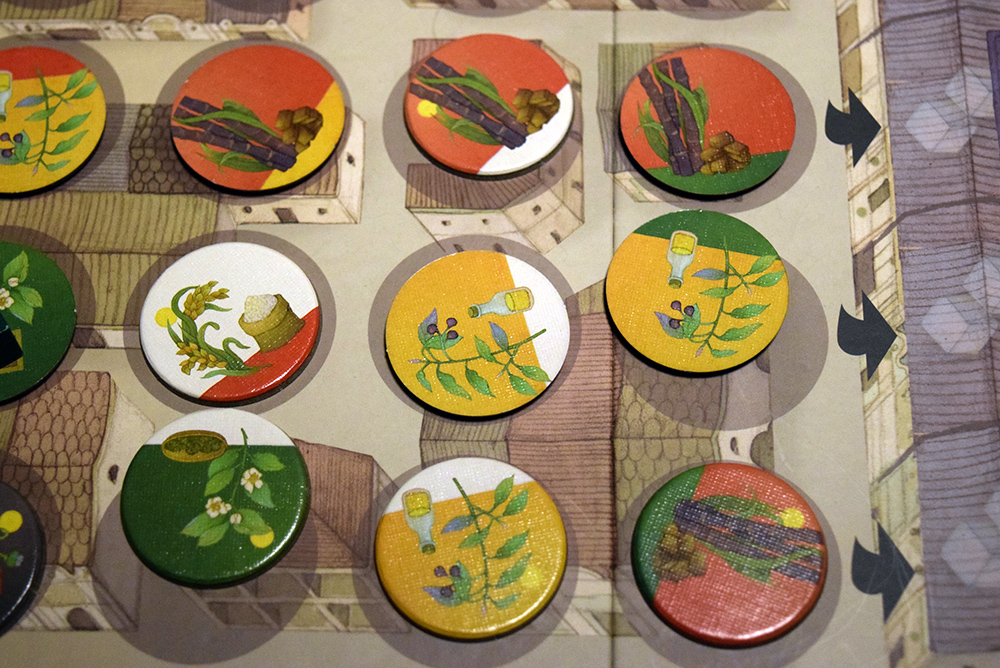 And that engine is built around the acquisition and expenditure of resource cubes.  Dadaocheng is a game where players will compete to be the most prolific, profitable merchant, and the mechanism of gaining goods is the manipulation of the central market, represented by a 4×4 grid of discs.  Each disc shows one of five of the available resources and on each turn, a player will manipulate these discs, either by swapping 2 of them or by flipping one over (each disc’s face is a different resource). 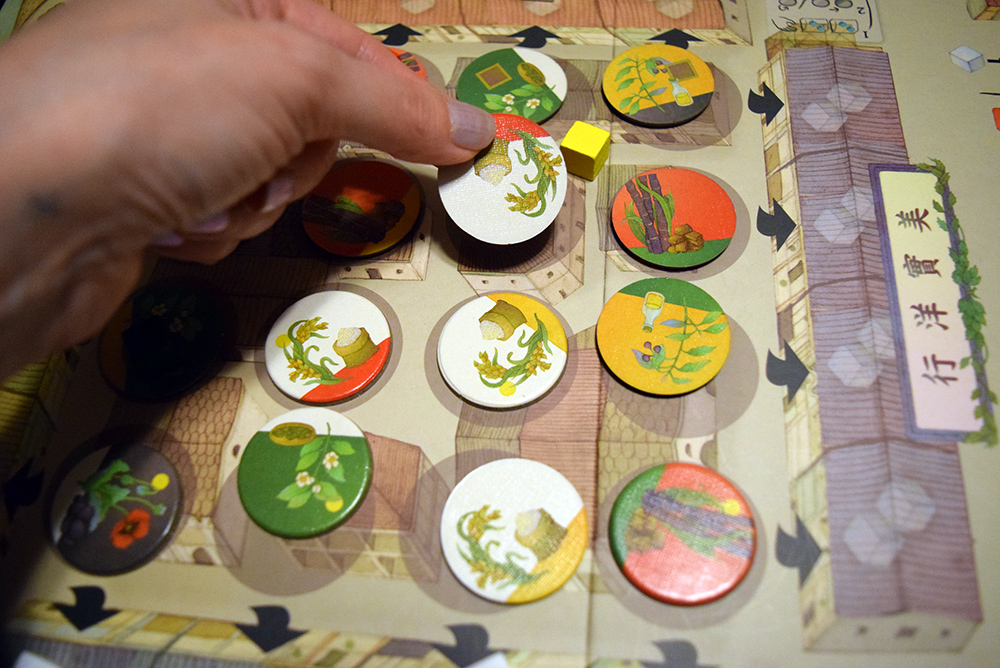 By creating lines of 3 or 4 matched discs, players will secure resources for themselves.  Adding to the puzzle of Dadaocheng, though, is the fact that once resources are rewarded, the scored discs flip over, and if another row of 3 or 4 is formed, then that row scores, and so on.

That’s the brilliantly simple turn-by-turn puzzle of Dadaocheng – how can you maximize your cube acquisition.  However, unlike the original game, cubes in Dadaocheng must be spent on the turn they are gotten and your ‘handsize’ is limited (at least until you upgrade your warehouse), so you’re not just thinking about getting lots of cubes – you need the cubes you can spend now. 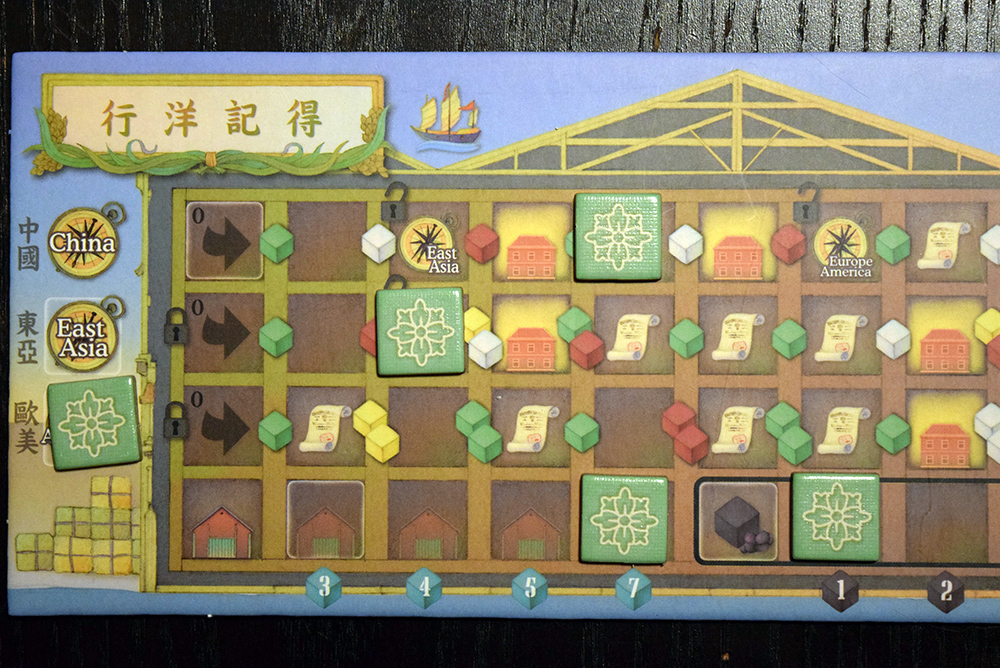 Resources are spent to move your markers along the various tracks of your shipping and warehouse boards, which is where the majority of your points are likely to come from.  Each track will give you benefits as you move along them, including giving you access to buildings (which give you once-per-turn powers), increasing your warehouse size, and giving you bonus resources, all of which can be taken advantage of immediately. 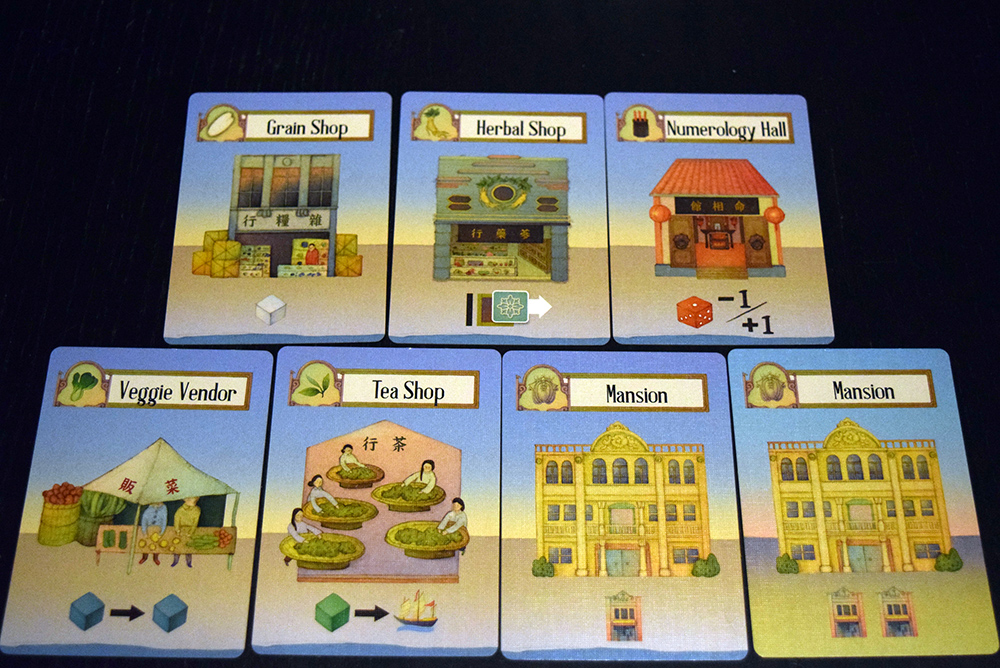 A good turn in Dadaocheng is like a cascade of cubes.  Grab a few from the market to advance your tracks, which in turn let you advance other tracks, which give you bonus cubes, which you gamble away at the temple, which gives you more cubes, and so on.  Since your stores get wiped out at the end of every turn, each round is all about canny maximization through clever disc manipulation and strategic cube spending (and a bit of luck never hurt).

That said, you have precious few turns – Dadaocheng ends after 6 turns at any player count, and you will likely feel (at least at first) that you haven’t managed to accomplish nearly as much as you’d expected.  It’s a tight game, and bad luck on the dice or a weak field of discs can leave you spinning your wheels a little, and with only 6 chances to act, that will feel terrible.  On the other hand, the sheer cube-snatching elation of a good turn more than makes up for it in our experience. 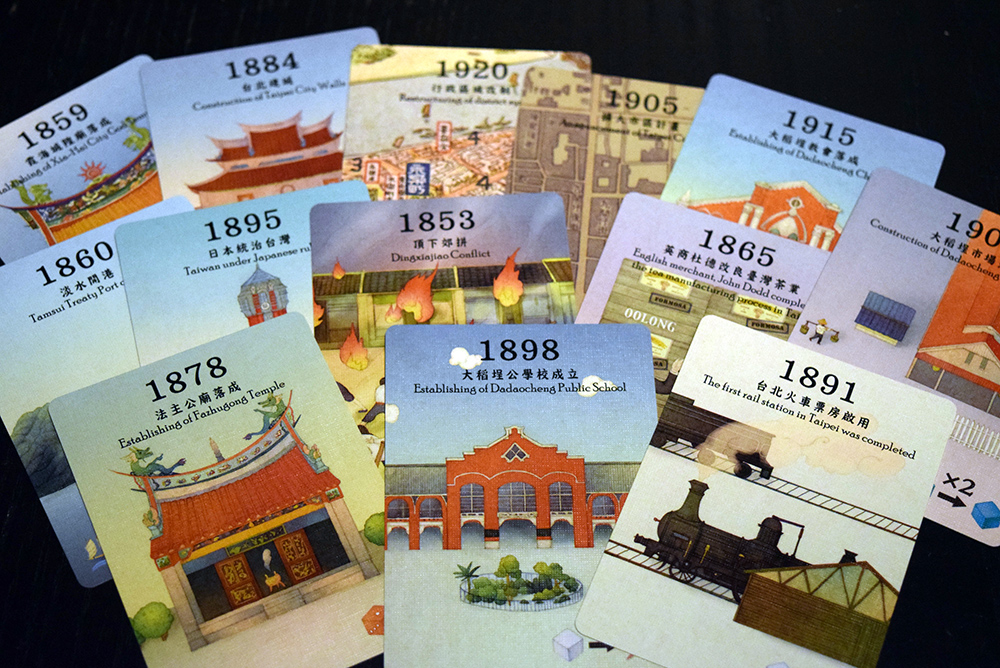 Helping the experience along, each round you will draw a random event card which will affect gameplay for that round.  These will often give you more cubes, or give you new ways to spend them, and all feature significant moment’s from Dadaocheng’s actual history, which we think is really cool.

So that’s our review of Dadaocheng – it’s good, really good, and much like the original, we see it as an excellent game for 2.  Highly recommended, and if you’re one of the lucky thousands at Essen, you can try to snag a copy now!  But let’s take a moment to talk about how it compares to the original. 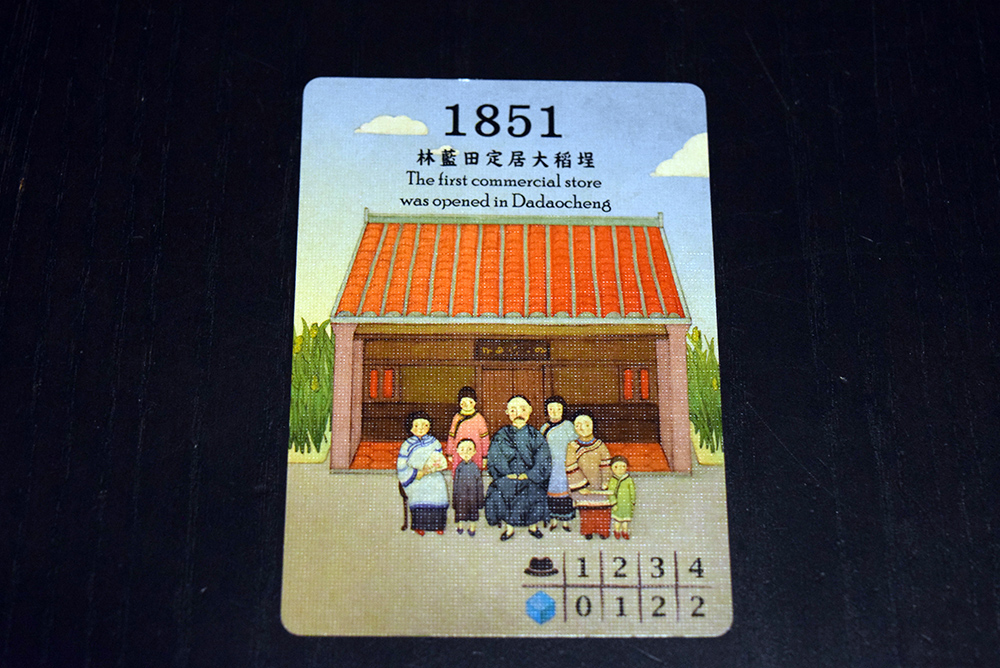 Simply put, there are too many differences between Dadaocheng and its predecessor for us to simply make a list.  Honestly, it’s easier to talk about what’s the same – you flip discs, gather resources, and spend them to secure points.  But the similarities more or less end there – instead of building a tableau of buildings and ships, you’re progress up your various tracks is how you’ll score your points.  And the way these tracks interact with and bump each other makes the second edition of Dadaocheng an even more strategic, thinky game than the original. 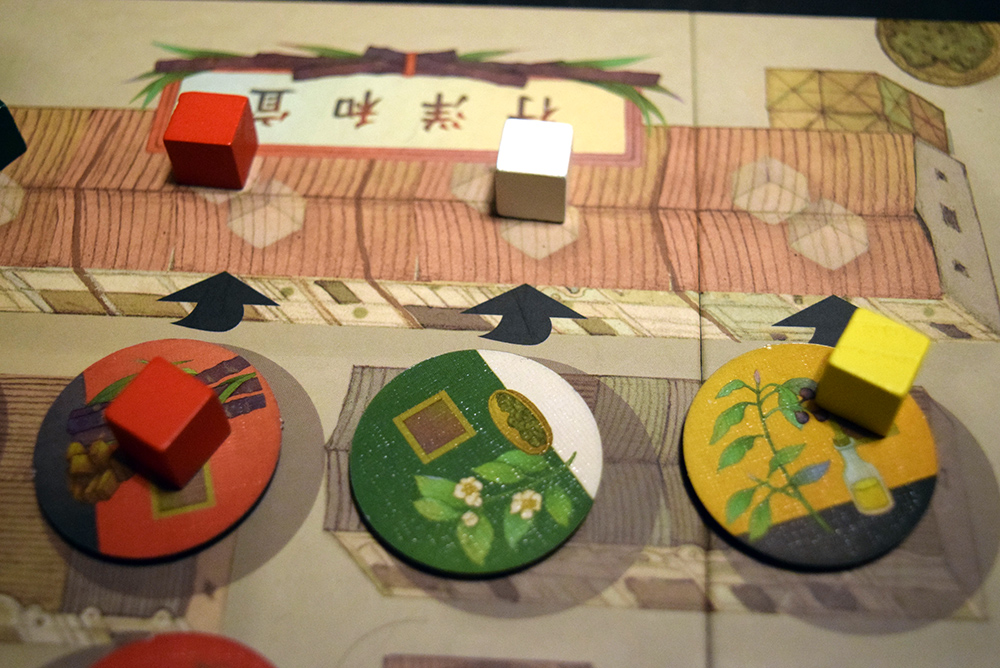 One of our criticisms of the original Dadaocheng was that it was ponderously slow at max player count – we rarely wanted to play it with 3, let alone 4.  The new version of Dadaocheng addresses this mostly – there are new rules about cubes being added to discs, which will get moved into player warehouses, and eventually can be claimed by players instead of moving discs.  That means some turns don’t require a ponderous calculation of match-3, but rather have players quickly snatching a small handful of cubes and taking their turn.  This happens more frequently at higher player counts, and does serve to keep things moving, as does the fact that players don’t need to wait for each other to finish spending cubes before they take their turn; as soon as someone finishes tinkering with the discs, the next player can go, significantly reducing downtime…up to a point.  Dadaocheng still plays best at 2, and is best seen as a strategic puzzle, rather than an economic game. 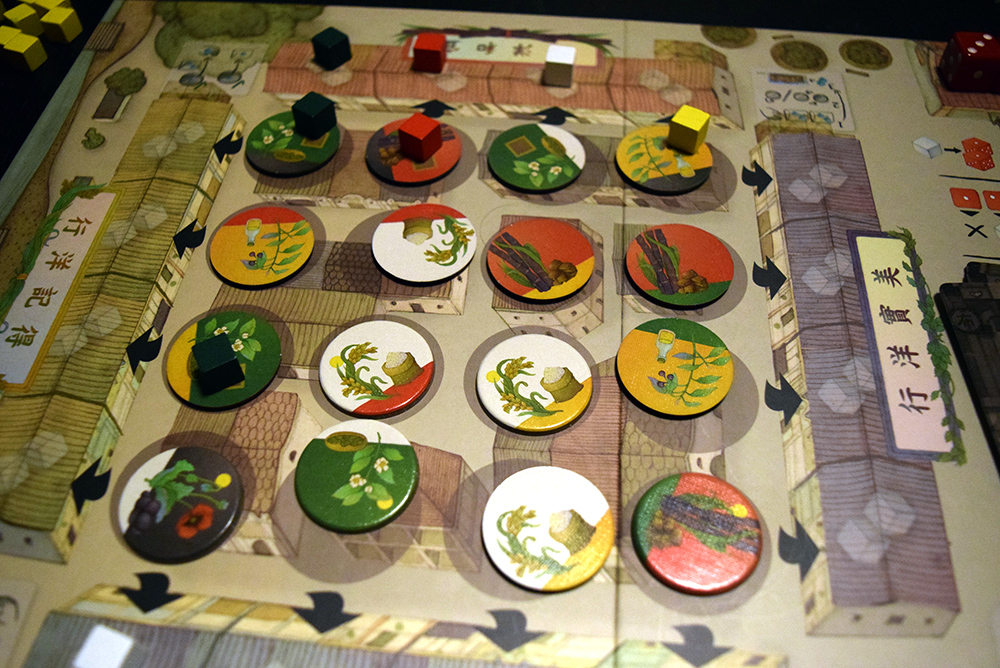 All that said, we highly recommend this version of Dadaocheng.  For those who love the original, we definitely advise giving this one a try.  And if this is your first time hearing about this excellent game, then definitely make it your business to at least find a way of trying it – Dadaocheng is absolutely a good time!