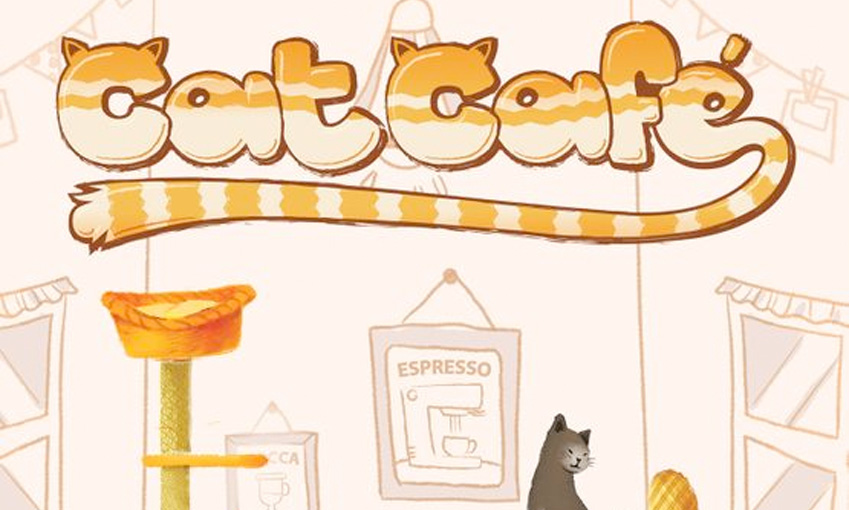 Jess
Cute cats. Roll and writes. Small boxes. These are a few of my favorite things, so when a game proposes to include all these aspects, I get really excited! But despite the fact that you’d think it would be like catnip to me, somehow Cat Café by Alley Cat Game just doesn’t work for me. Let’s try to figure out why. 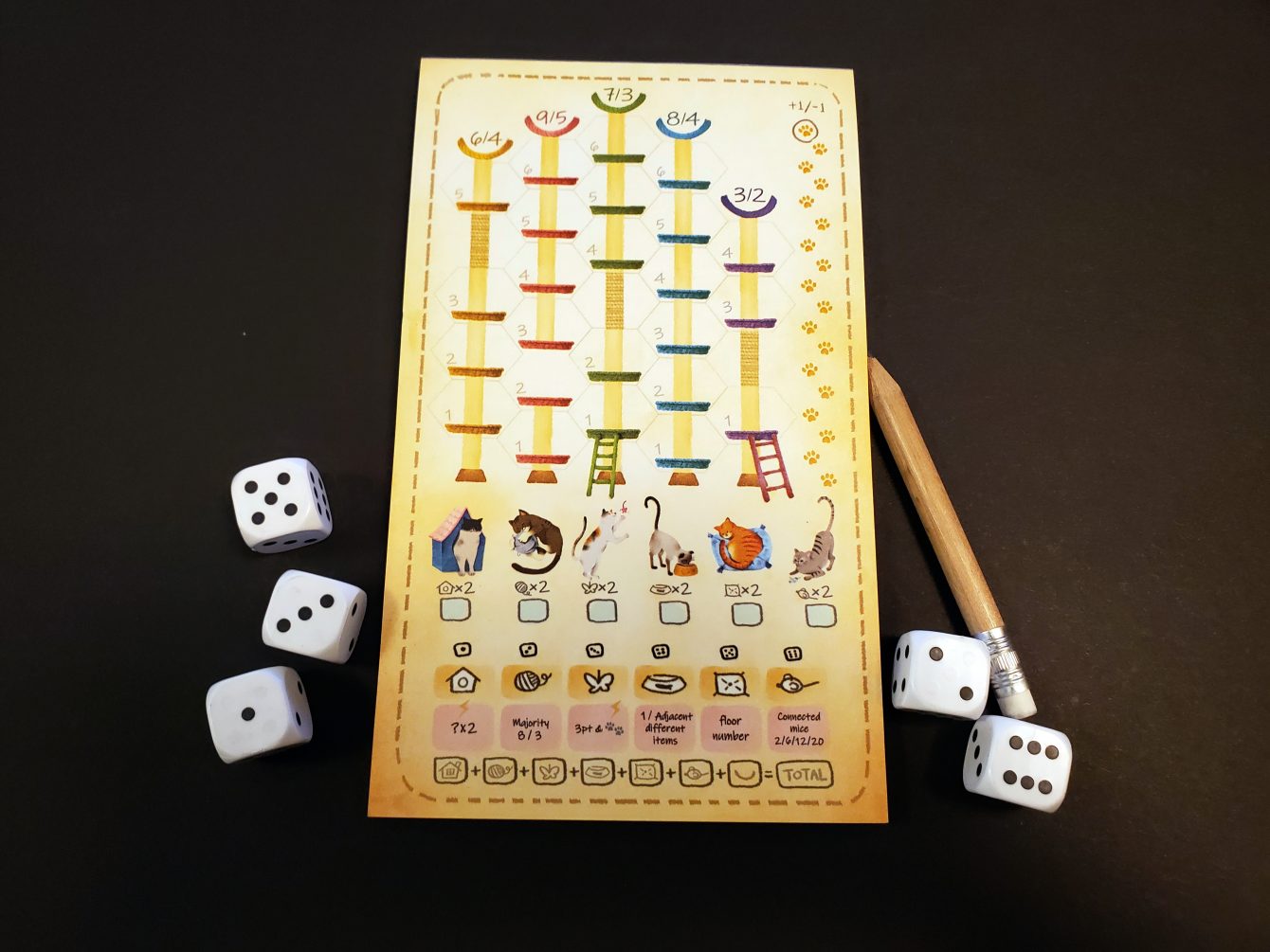 On the surface the game is perfect for me. The goal of Cat Café  is to create a cat café (duh) that’s comfortable and entertaining for your cats. Each turn you’ll be rolling all of the dice and then each player will draft one of the available dice. Once everyone has chosen, there will be one die remaining on the table, and this is the central die. 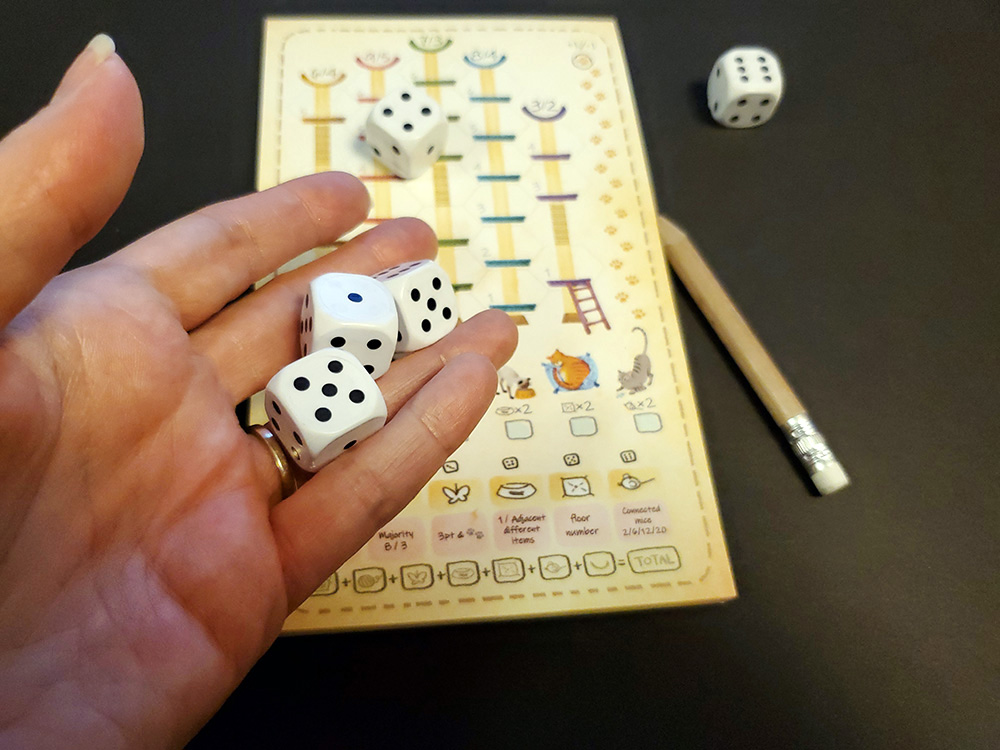 At this point, all players will mark their sheets separately. To figure out placement, you use the values on your die and the central die. One of the dice will determine which item you can mark and the other will show where you can mark it (you pick which is which).

If you choose not to mark an item, you can instead pass and circle 3 paw prints on your sheet. Paw prints can be used to adjust a die value by one and you can use as many paws as you like in a turn.  I liked that, because it meant that on turns when you couldn’t make an optimal move, you were at least banking the ability to alter future turns.  Not exactly a catch-up mechanism, but it works well. 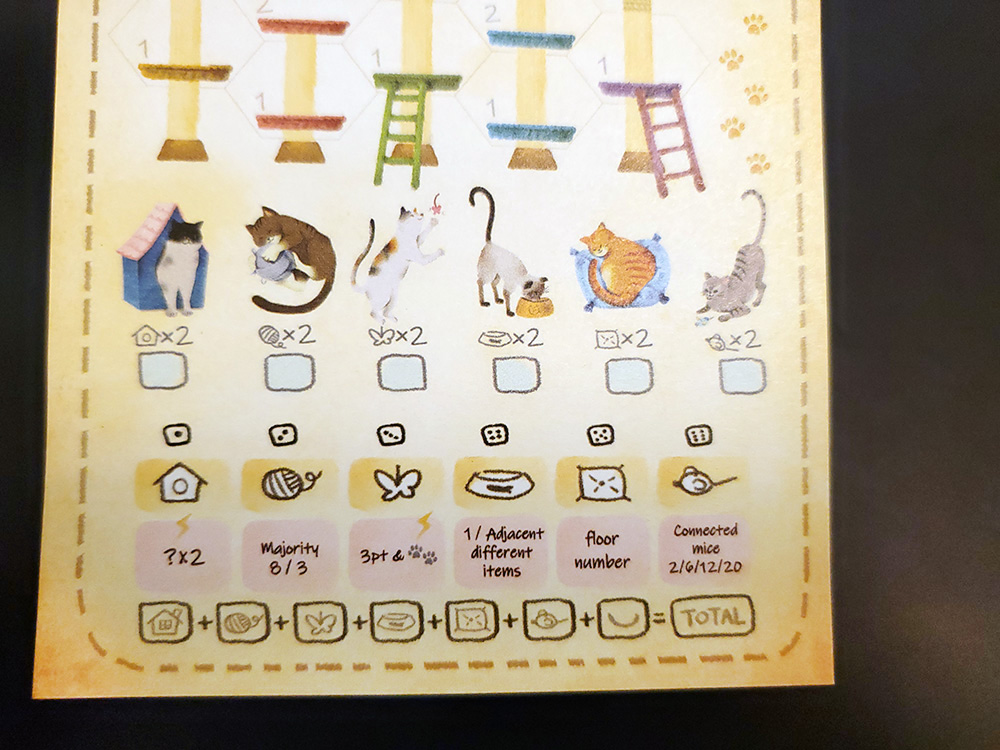 There are 6 different items you can add to your café and each one has a different scoring mechanism.

Once a player has completed 3 cat towers, the game ends that round. 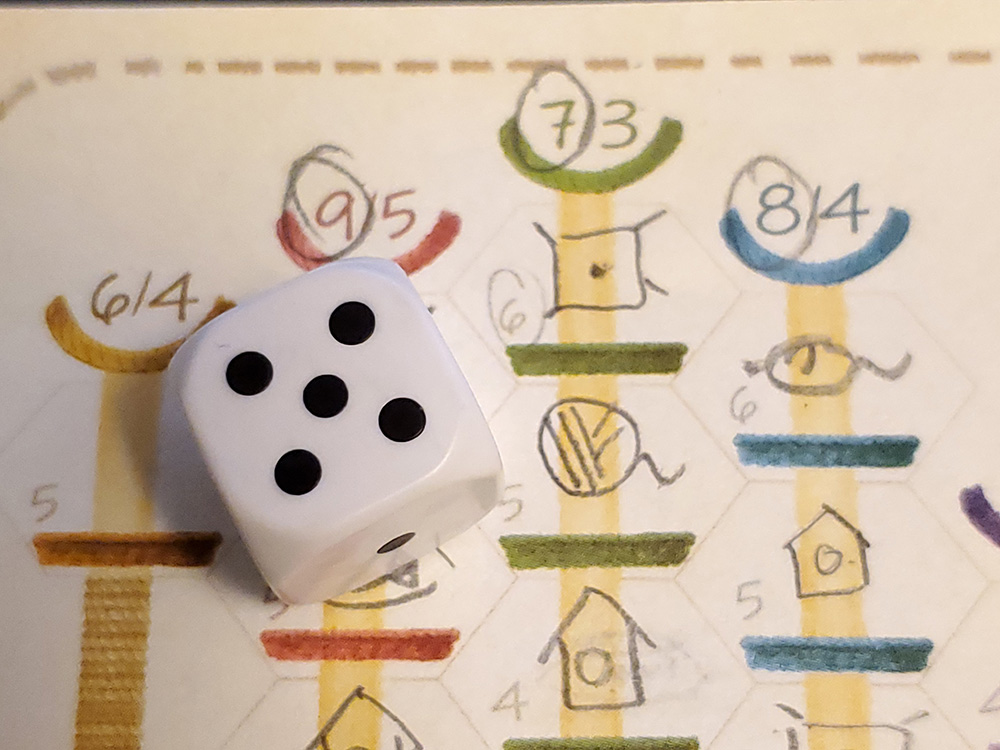 It sounds like a simple to learn, yet fairly strategic game, and it is. I was able to learn Cat Café in only a short few minutes and start playing what would turn out to be a game of many tiny decisions that have a large impact as the game goes on.

If you are particularly competitive, you can keep an eye on what your opponents are doing and try to finish your cat towers before they do to win some extra points or grab up a die you know they need in order to score big.

It all sounds good…and yet, somewhere along the way, the game loses me. 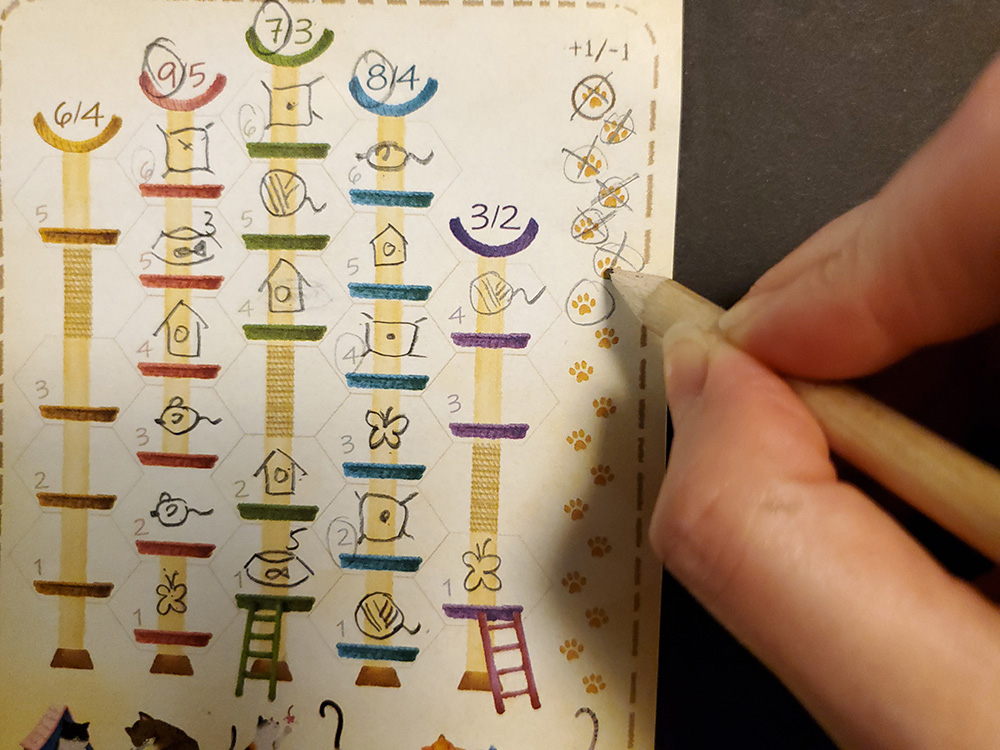 I think a lot of my issue with Cat Café is that it’s fussy. Yes, cats can be fussy, so I guess its thematic in that way, but every turn grinds to a halt as players hem and haw over which die to choose; needing to calculate every single placement possibility to uncover the best possible combo. If you are playing with 4 players and manage to roll a variety of numbers, this can slow everything down significantly. 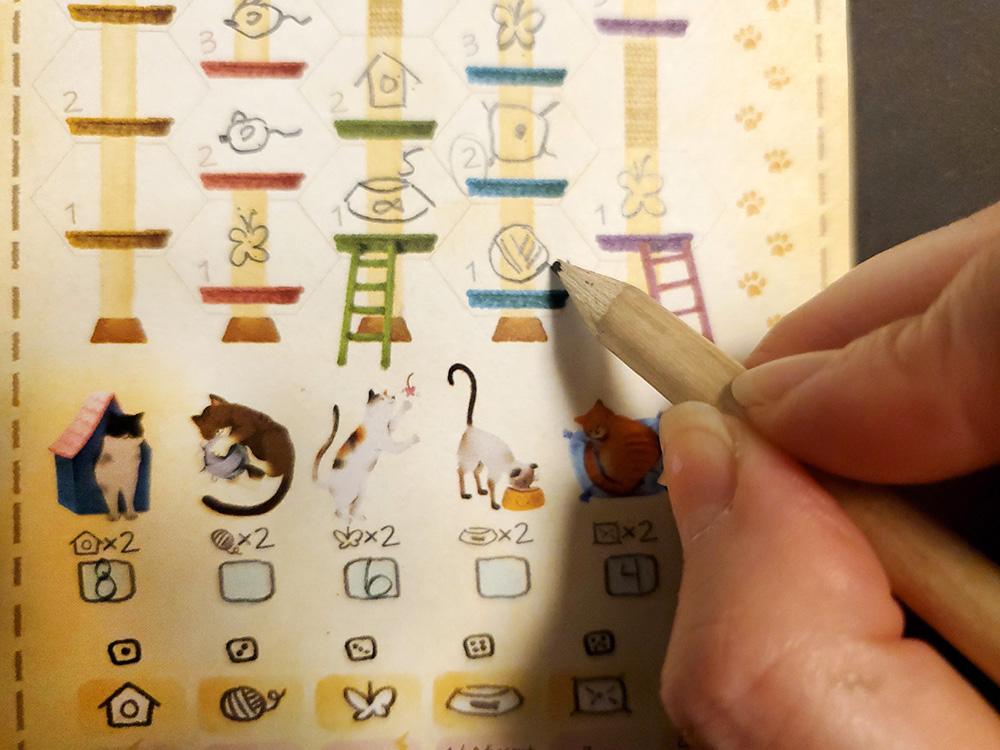 There’s also very little interaction. Even though the possibility for snagging a die your opponent might need is there, I found I was spending the entire time just trying to figure out where to place my own items; having no time to pay attention to what anyone else was doing.

But even with what I just said being true, because everything is based on the dice rolls, you can’t really plan in advance and so all actions must be appraised in the moment. This is high stakes café construction and if you misplace your mousie, your cats will be sorely disappointed in you.  I’m not ok with that. 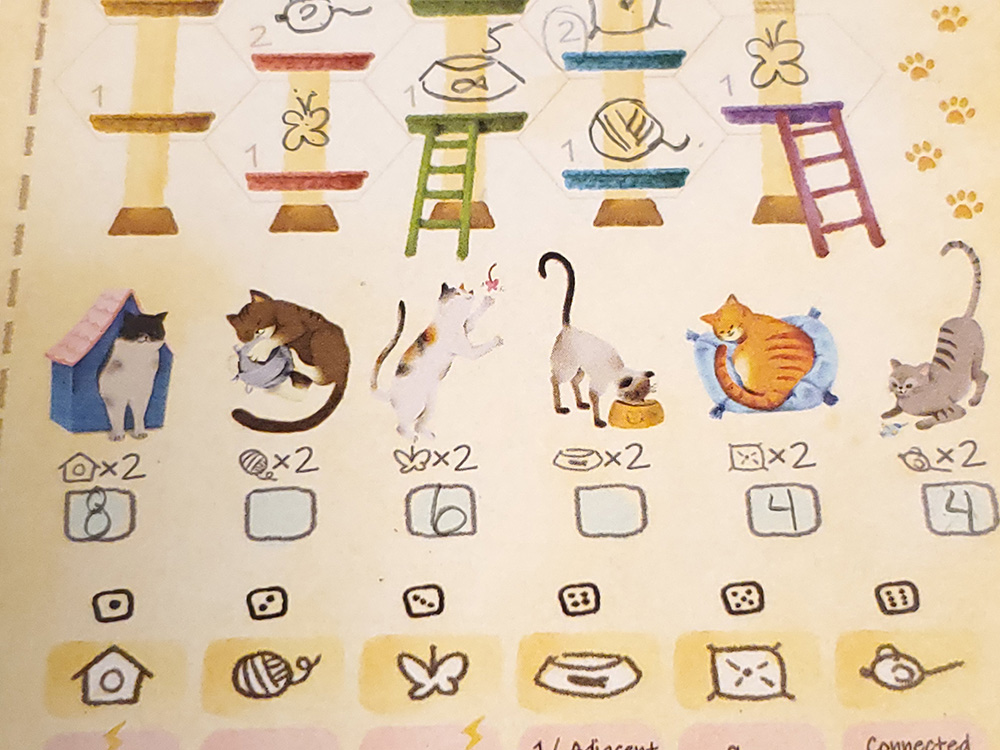 Also, is it strange to say that I wish there were more cats in this game? The focus really is on building the cat towers and the cats displayed are tiny illustrations on the score pads. The art is really nice and I wish it had been utilized more in some way.

Also worth mentioning, and I hate to say it, is that the dice in the print run we got our copy from are very substandard.  Alley Cat Games has acknowledged this, saying it was a decision on the part of the manufacturer they didn’t approve, but the only way to get replacements is to meet up with them at a convention, and that feels pretty lousy.  On the other hand, it’s five 6-sided dice, so it’s not like they’ll be difficult to replace if it really bugs you.  But still.

That said, while I might have not been as delighted with the game as I had anticipated, I’m sure many other folks will enjoy Cat Café. It’s puzzley nature and strategic choices do offer up a more complex game that will appeal to some, it just doesn’t work for me. When I think about cat cafés, my mind goes to relaxing afternoons playing with cats. Not about whether placing this mousie will lead me to a mouse-chain victory or if it will disrupt my plan to fulfill my cushion-topping dreams.

Recommendations based on Cat Café 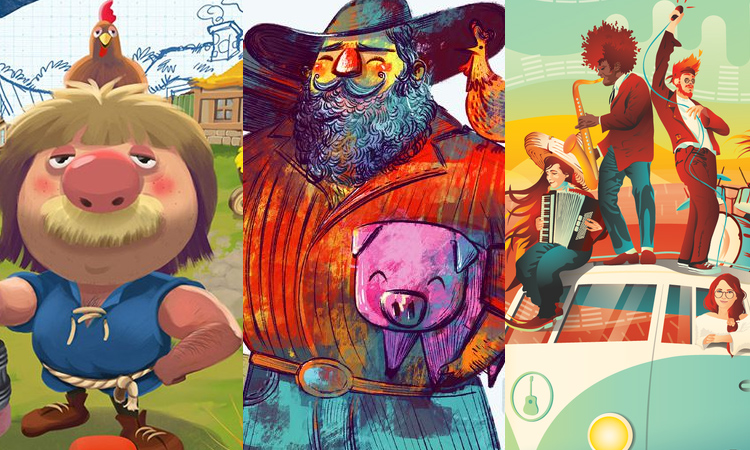