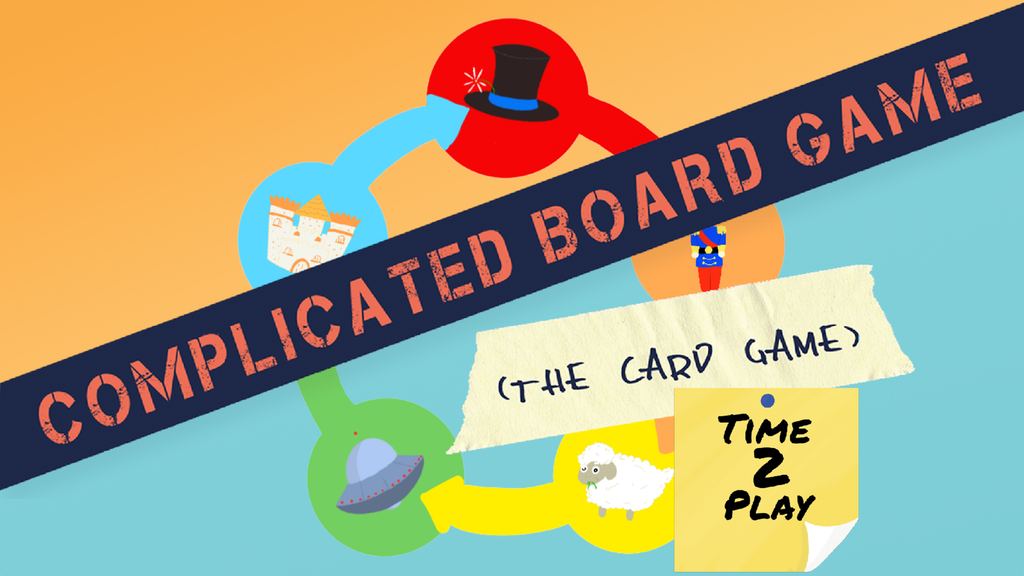 Complicated Board Game The Card Game: Time 2 Play not only needs a shorter title, but also brings back the chaotic, meta-humor-driven gameplay that's all about how convoluted our games tend to be.

Andrew
Back in the halcyon days of 2017, we did a preview of Complicated Board Game The Card Game, a chaotic card game of ever-shifting goals and rules, which we inevitably compared to games like Fluxx (and determined Fluxx to be the inferior of the two).  Well, Offcut Games is back with even more board game meta-jokes, expanding on the idea of the original.  Has Complicated Board Game The Card Game: Time 2 Play grown past its roots?  Or is it still the relatively light take-that-fueled filler that it used to be?  Let’s take a closer look and find out! 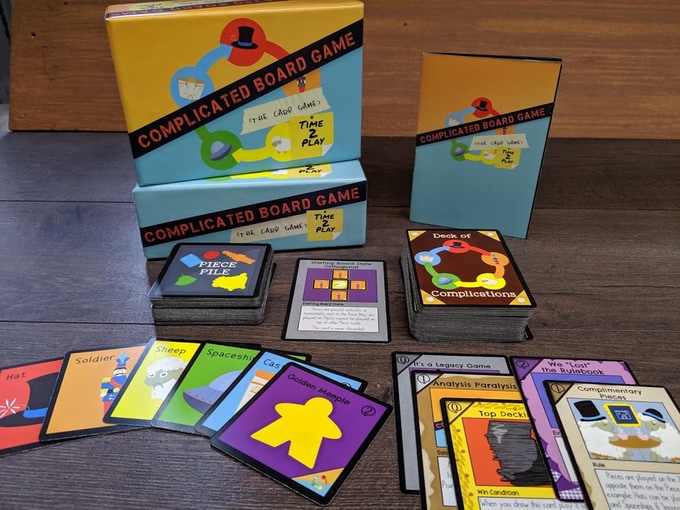 We got a preview copy of Complicated Board Game The Card Game: Time 2 Play, with the option of requesting a finished copy.  We weren’t otherwise compensated for this preview.  Some images from the Kickstarter page. 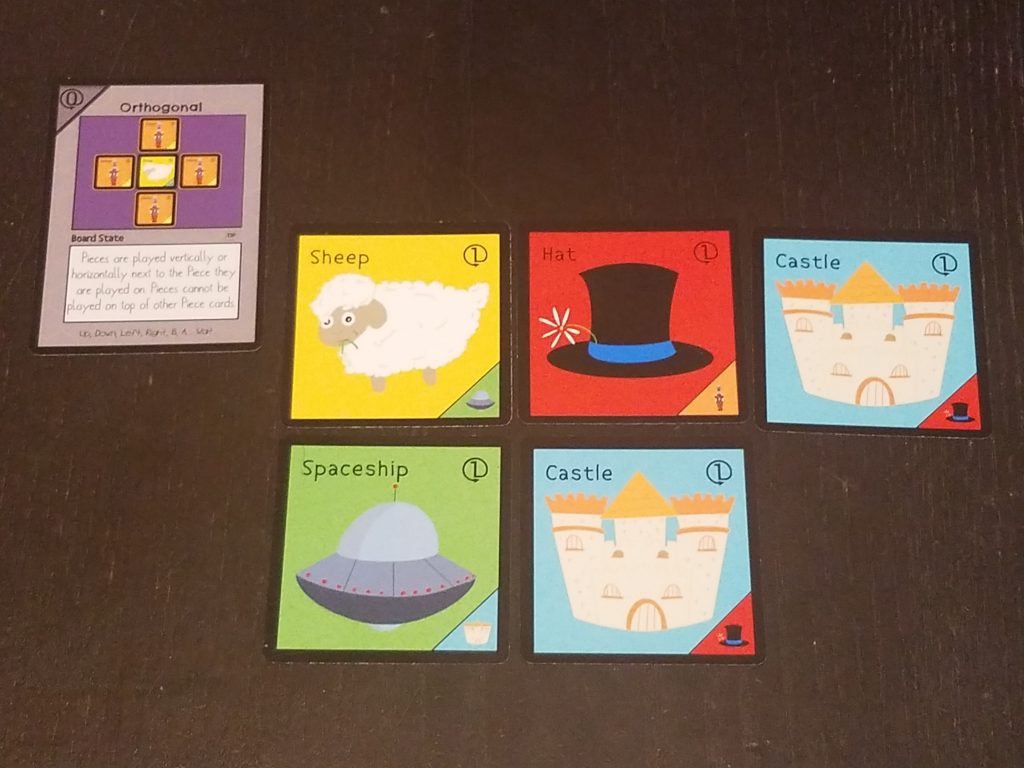 Jess
Geez, they really went with that whole thing as the title?

Andrew
I’m not going to do that whole cutesy renaming thing I did last time.  ‘Time 2 Play‘ it is!

Time 2 Play  is a new standalone expansion (expandalone?) – it can be played all by its lonesome, or integrated into the original game.  But for the uninitiated, the quick summary of Complicated Board Game goes like this: each player wants to win by either playing all of their Piece cards, or by completing some other goal (to be addressed in a moment).

See, perfectly logical.  If you can manage to get rid of all your piece cards, congratulations, you’ve won!  Probably.  I’ll get to that. 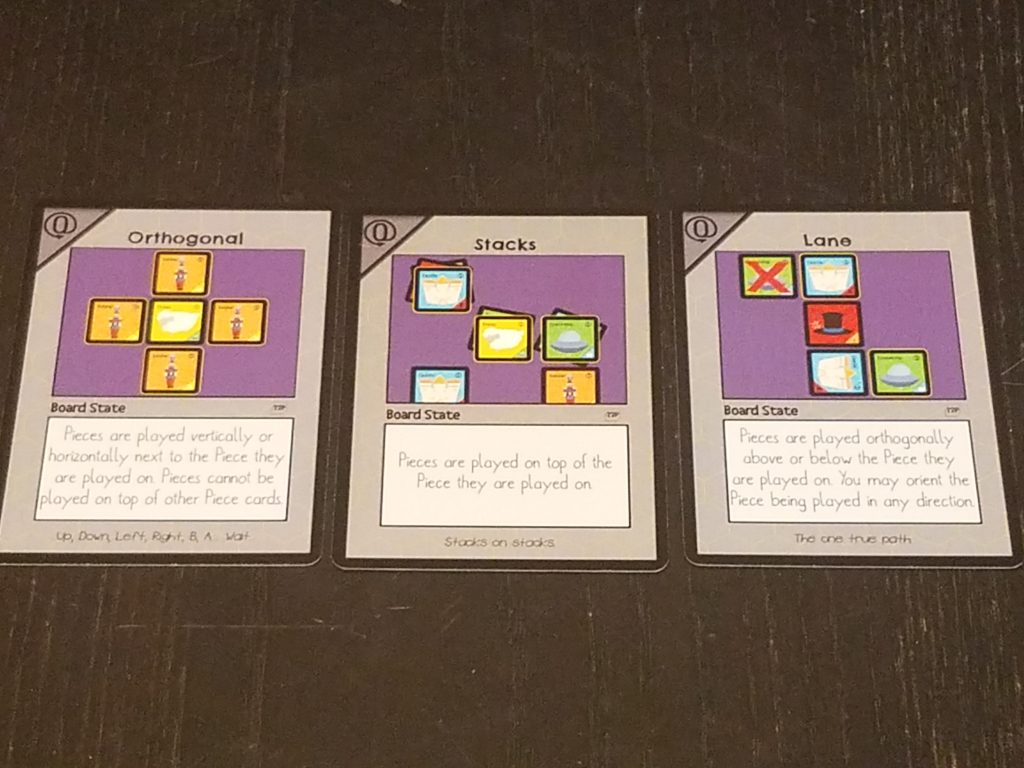 Now, where Complicated Board Game gets interesting are the Complication cards.  These cards fundamentally change the way the game works, imposing new rules and goals, and generally making it possible to screw your opponents’ attempts to play their Piece cards.  Some of these cards change the game a lot, like the cooperative variant, while some just allow for little changes such as the ability to cycle more cards or tweaking the cost of cards entering play.

And that’s a basic look at Complicated Board Game and Time 2 Play.  At their core, they’re the same game, so if you liked one, you will probably like the other.  Something to keep in mind is that Time 2 Play is an expansion more than a new game (though it can definitely be played on its own), so the core game is (somewhat ironically) the same. 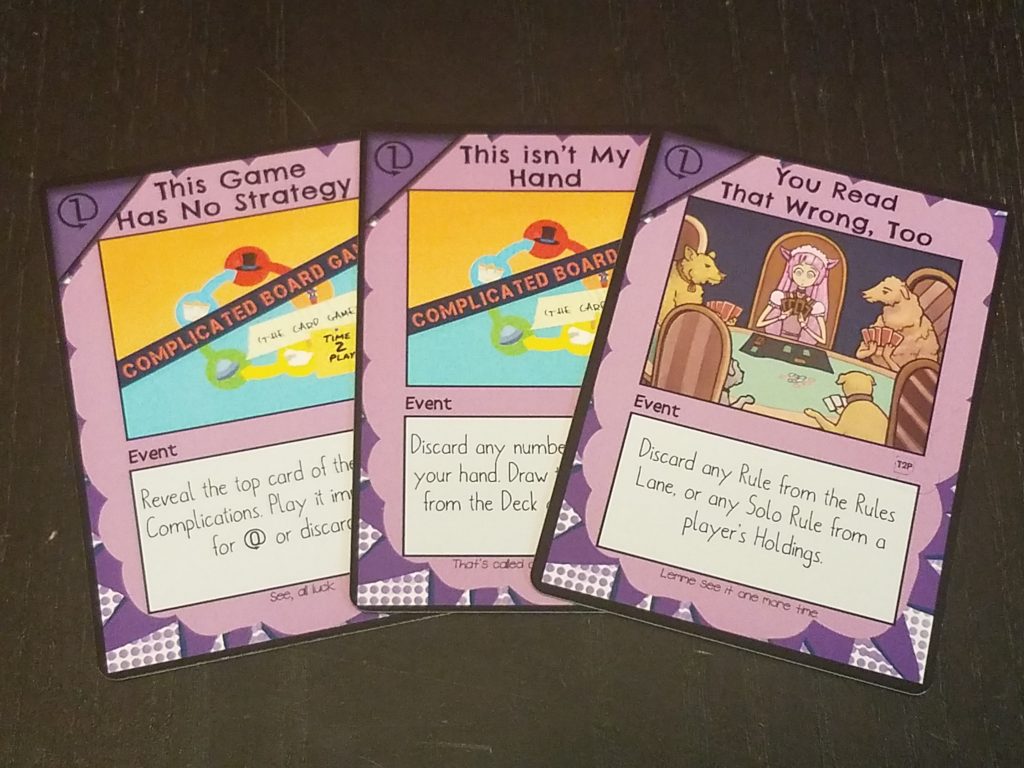 Time 2 Play does add to the original formula, though.  Time 2 Play features a new piece, the Golden Meeples, which are wild but can’t be played ‘on’ (at least at the beginning of the game), which makes them very easy to play and hard to work around.  It has a pile of new rules and game types, poking fun at common (and esoteric) game design concepts.

Jess
I particularly like the addition of Solo Rules, which only affect one player.  Some of them kick ass and you’ll love having them.  Some of them, uh, not so much.

Andrew
I won’t lie; I laughed out loud when I saw the ‘It’s a Legacy Game’ card and realized that it meant we could only play Piece cards to the discard pile.

In our review of the original game, we had this exchange: 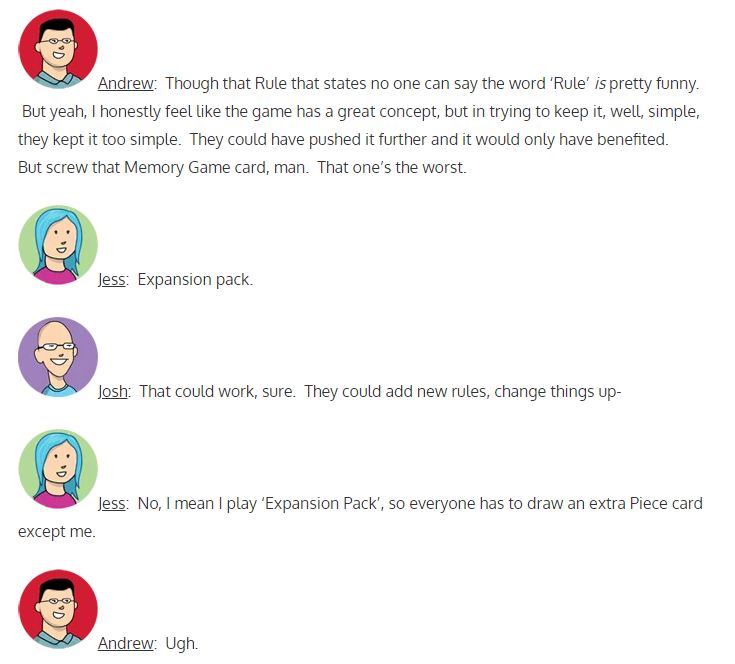 Broadly speaking, we agree with our past selves –  Time 2 Play is a great idea, but doesn’t quite take itself far enough.  We feel like it could have been way more fun (for its highly contentious definition of fun) if there had only been more ways to lean into what makes Time 2 Play unique – the whole ‘shifting rules to mess with each other’ style of gameplay.

Andrew
Because when it works, it’s actually really awesome!  We played in a game where one of us was one turn away from winning.  So, naturally, what did we do?  Changed it to a memory game (exactly like I was whining about 2 years ago), shuffled some pieces around, and forced extra card draws.

Jess
Did it help any of us win?  Heck no, we had to deal with that mess, too.  But it stopped her from winning in a way that was way more clever and satisfying than ‘lose a turn’ or some other such nonsense.

And ultimately, that’s where Time 2 Play delivers best – integrated into the original game, adding more chaos and disorder.  Both ‘base’ games feel just a little neat and tidy – an ironic departure from their stated theme – but once they work in concert, we feel like Complicated Board Game finally becomes the game it was intending to be all along.  So we say if you’re going to get in, go all in – get the original, get the expansion, and have fun messing with each other.

Time 2 Play still isn’t going to be for everyone – it’s aggro and convoluted and also somehow thinky and simplistic at the same time – but if you like Fluxx, you’ll love this; it’s (still) a way better game.  And if you don’t like Fluxx (and Team Gameosity doesn’t), you should still give Time 2 Play a look – Time 2 Play could be that great, mean, fun little filler that might just fit your next game night perfectly!