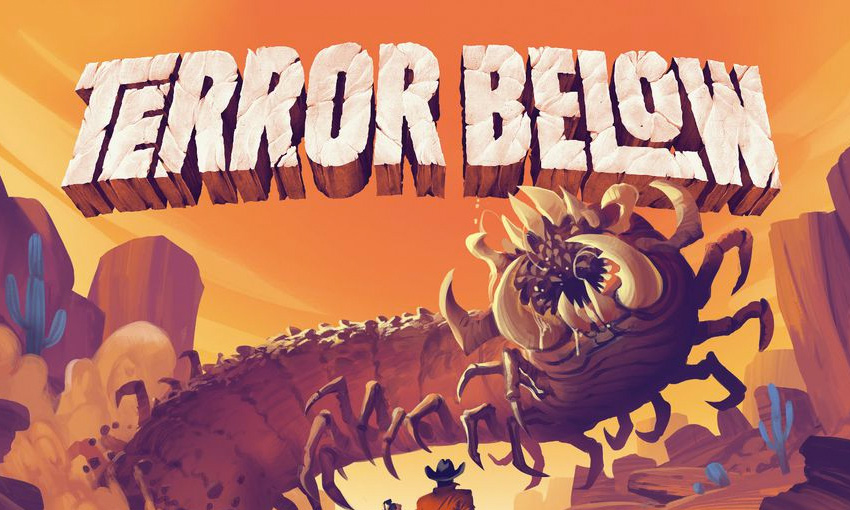 Jess
The desert stretches out before you and somewhere in its vast reaches are tempting piles of precious eggs. Multiple organizations are willing to pay big bucks for those eggs and all you have to do is drive into the wastes and collect them. As Valentine McKee might say, “This valley is just one long smorgasbord”, but are eggs on the menu…or are you? 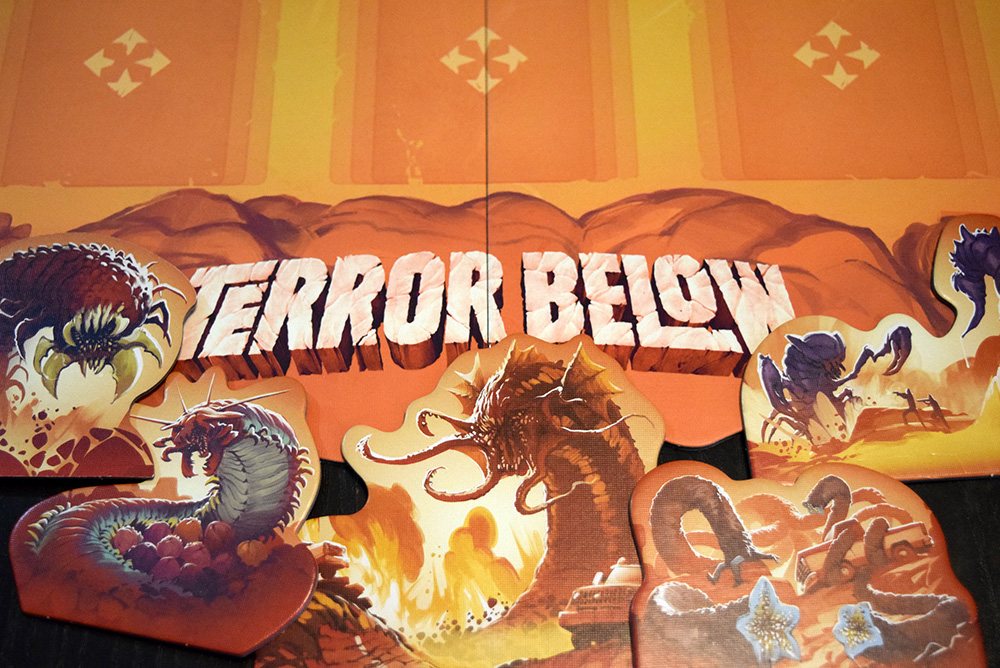 We got a review copy of Terror Below and the Hidden Cache upgrade from Renegade Games.  Most of these photos only feature the contents from the base game.

Terror Below may not officially be a riff on the 1990’s film Tremors, but the spirit is there.  Created by government experimentation gone awry, colossal worm-monsters hunt their prey using vibration sense from beneath the Nevada desert. Make too much noise and you’ll be neck deep in man-eating worms! 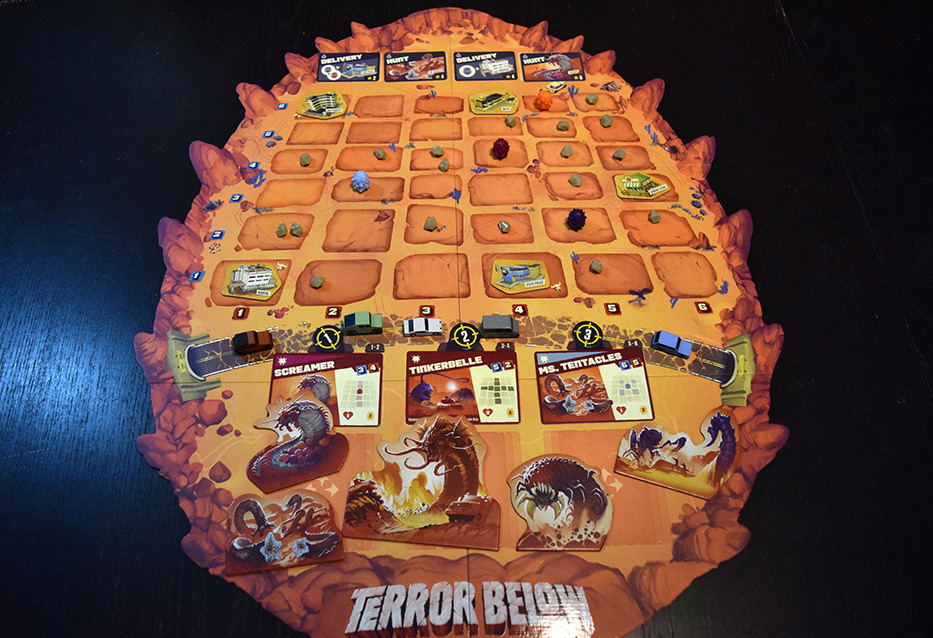 Andrew
More likely it’ll be the worm’s neck you’ll be deep in.

Jess
Do worms even have necks?

Andrew
Do they have anything besides necks? 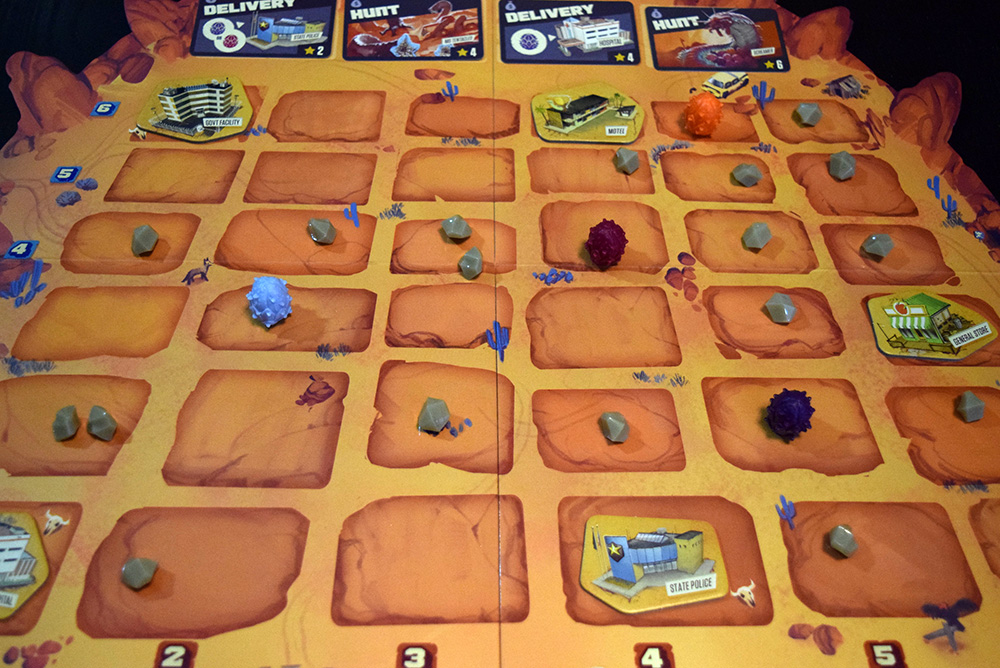 Obviously, in a game filled with rampaging, gargantuan lumbricina, the objective of Terror Below isn’t to escape, but rather to steal the worm’s eggs, and your brave/incredibly reckless teams are more than willing to drive into the valley to collect and deliver. Terror Below revels in its particular brand of lighthearted mayhem, featuring goofy gadgets, hilariously stereotypical characters, and lots and lots of giant worms. 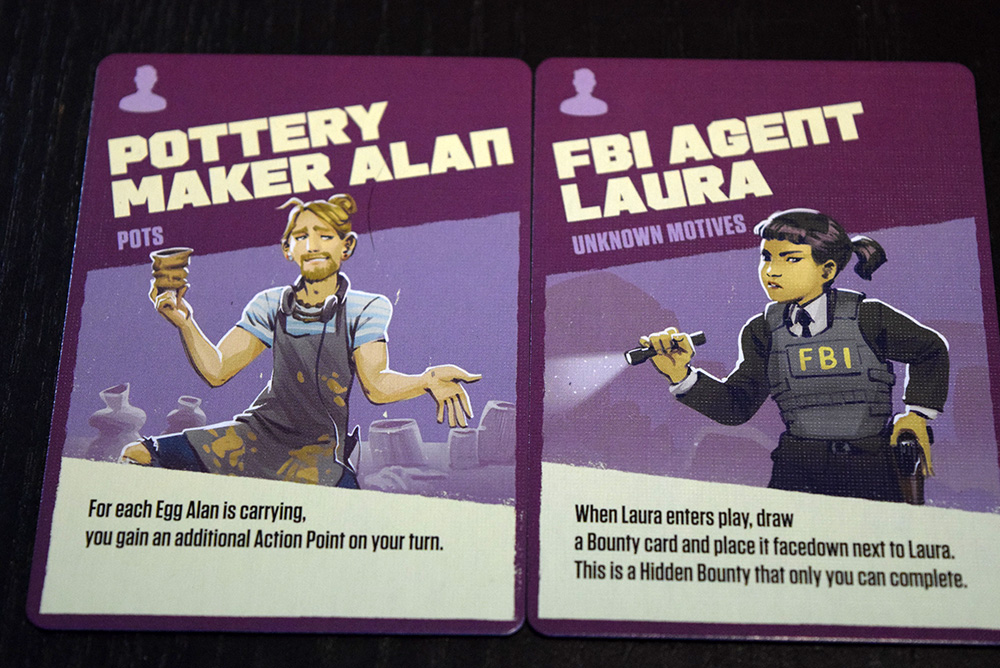 The goal of Terror Below is to be the first player to score 20 victory points. There are a bunch of ways of scoring points, but the primary way is via bounties. These missions will be either to deliver eggs to a location or to kill worms. 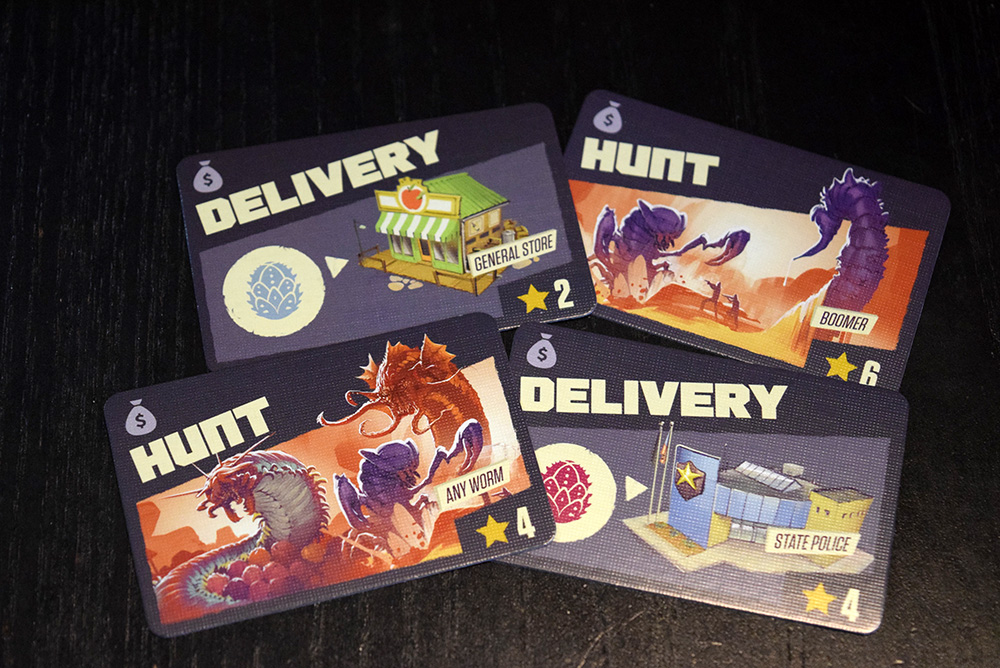 Collecting eggs is fairly easy. On your turn, you play a vehicle card to one of the 3 worm piles (which pile is important, I’ll get to why in a second). These cards will give you action points which you will be able to use to move around the board, clear rubble, and pick up and deliver eggs.

Vehicle cards can also have actions on them that can do a variety of things including causing the worms to move or giving you extra actions. 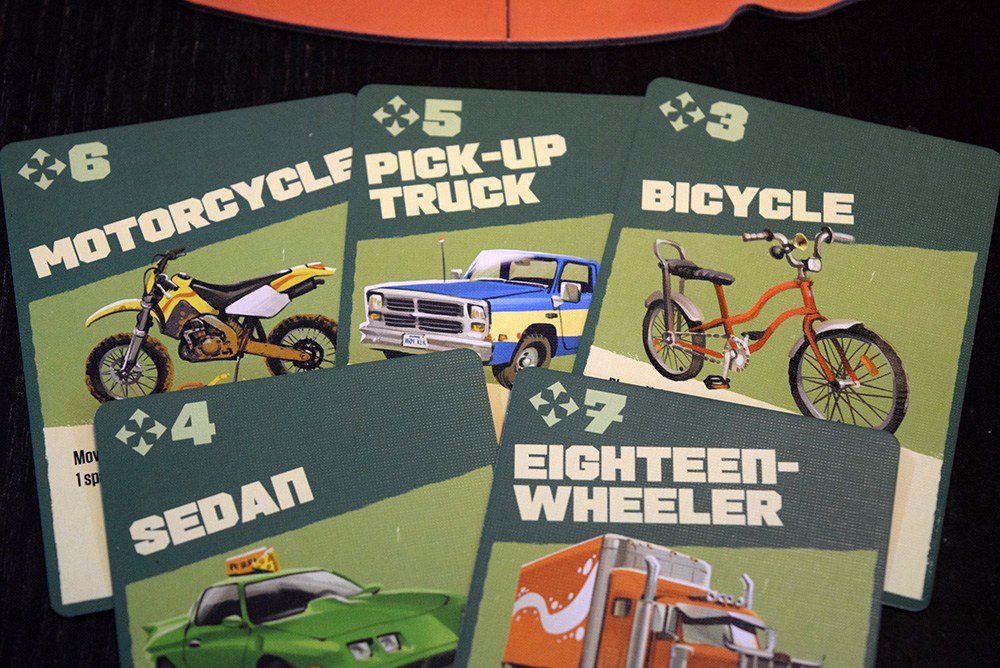 Knowing which vehicle cards to play at any particular time is where the strategy lies. As I just said, which worm you play to can be affected by the card, causing it to move around beneath the board and, once enough cards have been played to its pile, erupting forth to devour anyone in its path! You can actually guide the killer worms away from yourself as you pilfer their eggs or lure the worms towards your opponents, hopefully leaving their party in shambles as the worm attacks.

I say hopefully because causing a worm to attack can be a double edged sword, as your opponents have the opportunity to defend themselves. If they manage to kill the worm with whatever weapons they have stocked up, they can earn points and possibly complete bounties, getting them ever closer to winning the game. Should they fail to finish the worm though, their party leader will be killed off and their next character will have to step in to continue the egg hunt. 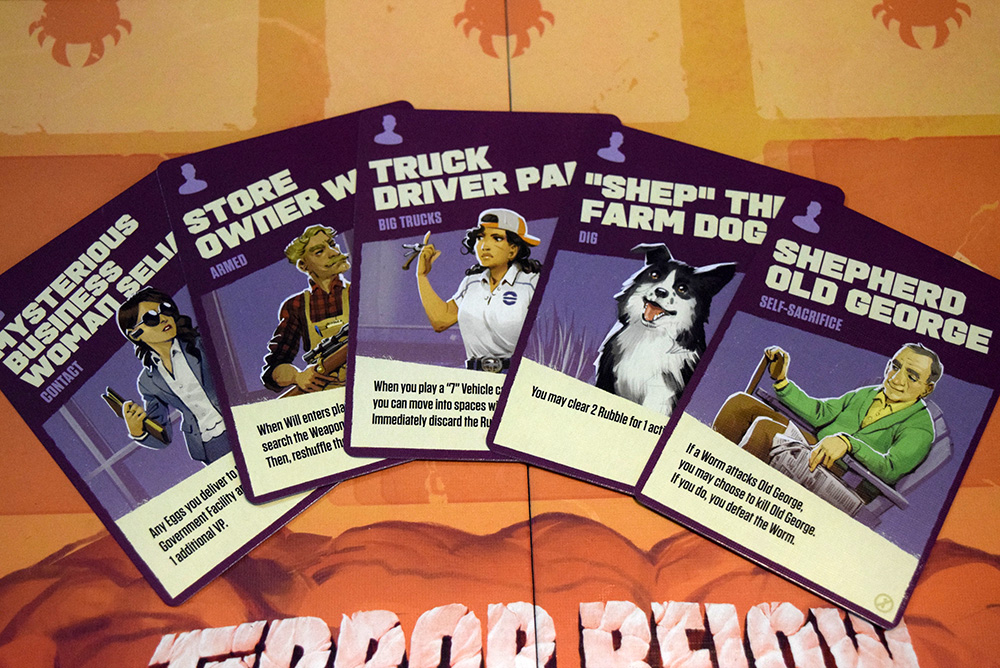 Andrew
Having your leader eaten is a bummer, because they drop all your gear and you lose their special power.  But hey, that just means the next character has a chance to shine!

Jess
And even though there is technically player elimination in Terror Below, the fact is that if a player is ever out of characters, the game ends that turn, so it’s not that bad.  You’ll lose, yeah, but you won’t sit around watching your friends play while you root for the worms.  Not for long, I mean. 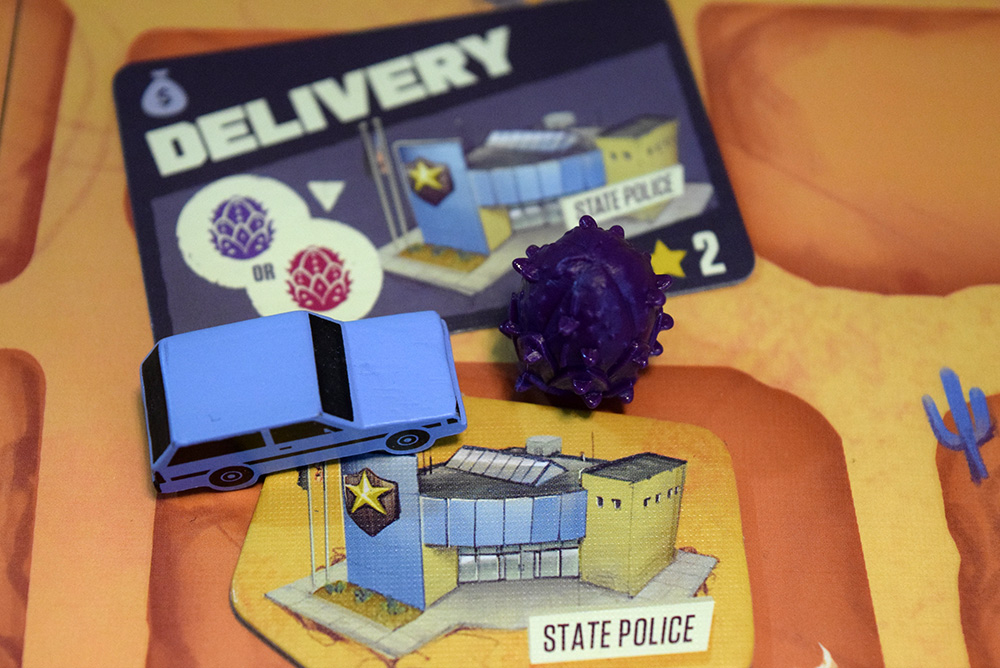 In my experience with Terror Below, the worms were an ever-present threat, yeah, but they didn’t show up as often as I had expected. Worms only attack once their card pool is filled, and while some worms will activate fast, only needing two cards to wake up mad, others (the more powerful worms) can require 3 or four cards. 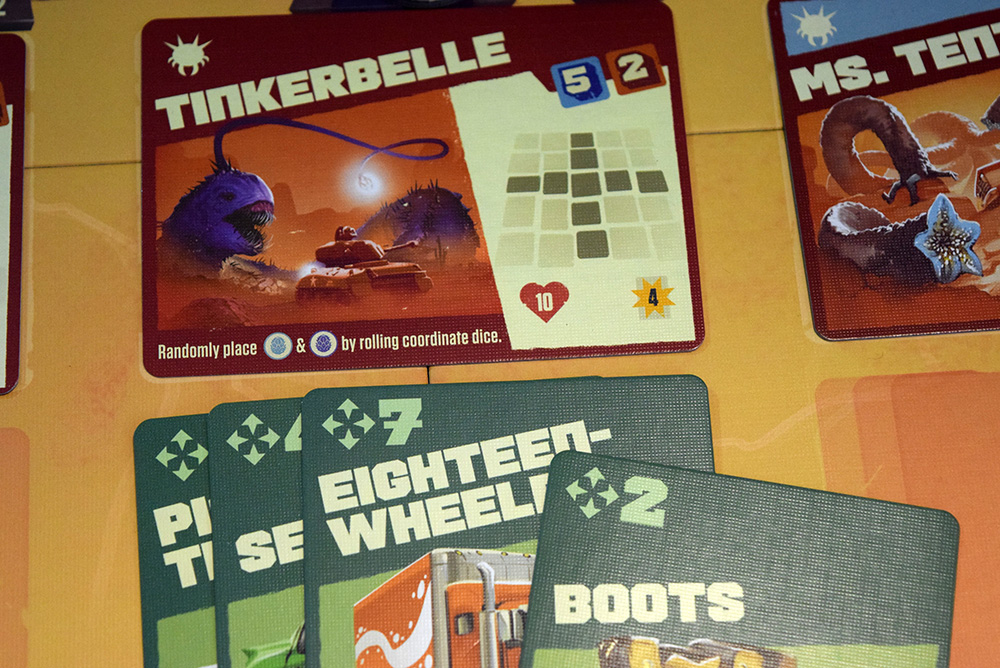 The Queen is a devastating mother who blasts almost the entire board with rubble when she awakens, but she requires 5 cards so if you can stave her off for a while. 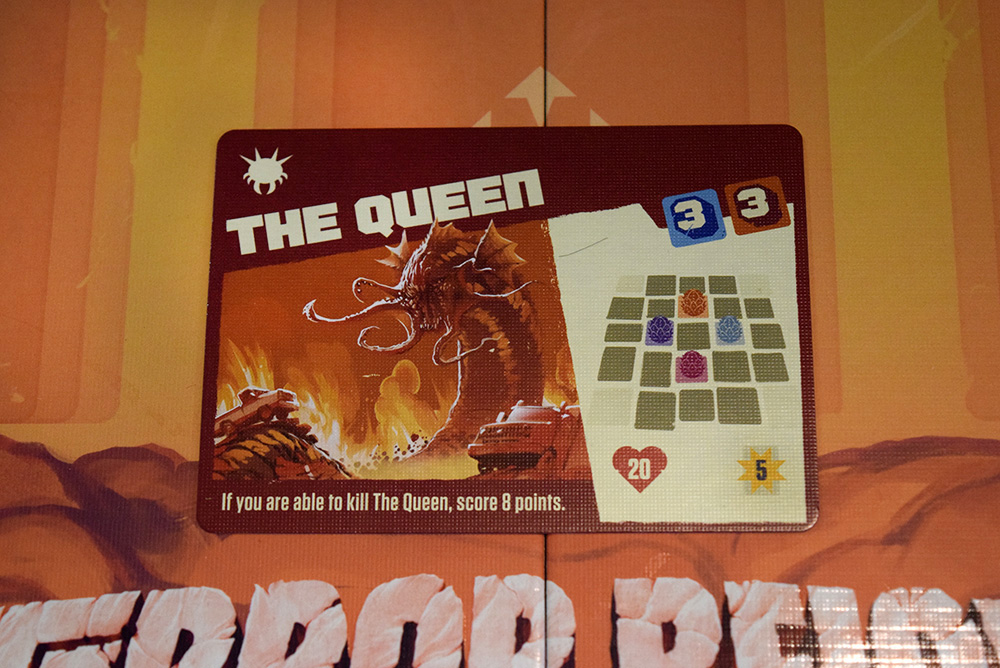 Andrew
I know what you mean.  Honestly, I had hoped for more, you know, getting eaten.  It seems like the obvious thing to have happen!

Jess
I know!  With more players, it felt like worms attacked more frequently, but that was just because you had fewer of your own turns before their piles would fill up. 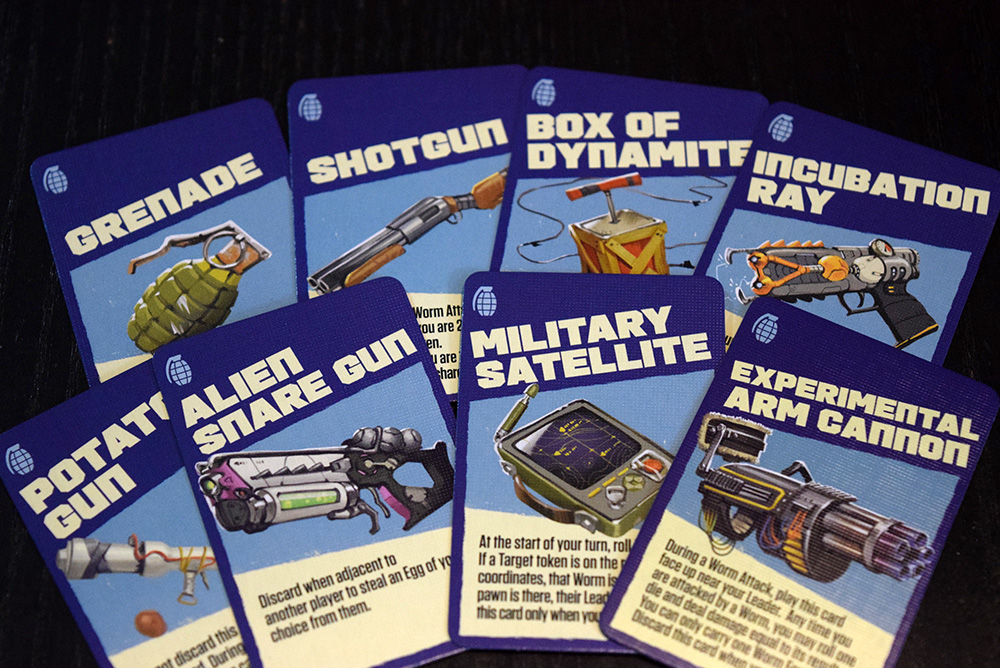 Andrew
I was also pretty surprised that the worms weren’t on the board.  It makes perfect sense from the perspective that they’re moving around underground, and it would create unnecessary clutter to have worm minis on the board since they’re only potential threats.  But the art that they created for them is great! 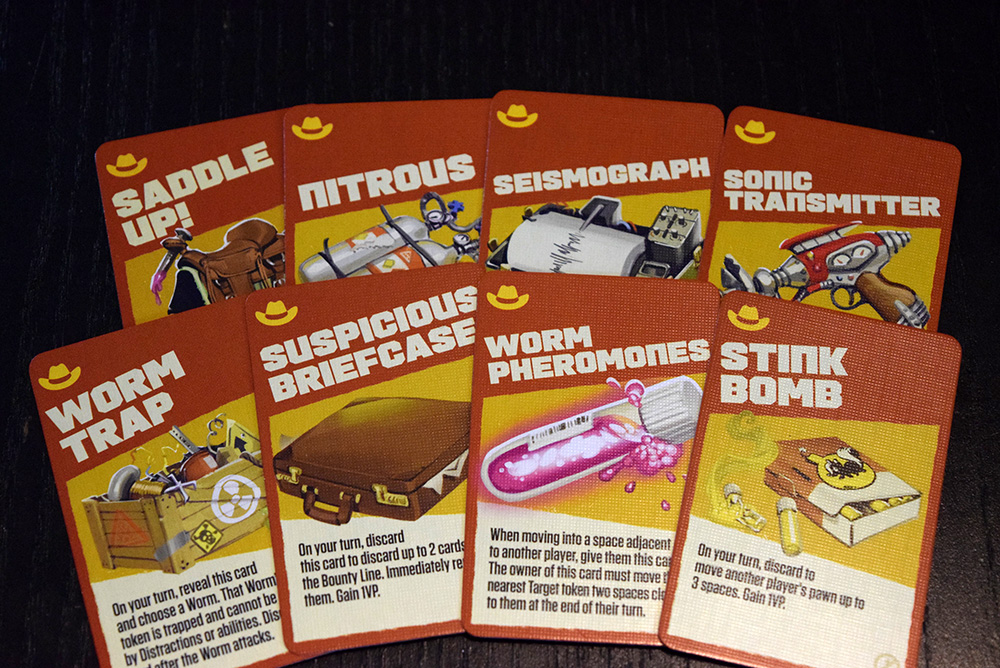 So that’s Terror Below. You drive around in your truck/station wagon/bicycle/other means of conveyance, steal eggs from really angry worms, prod those worms into eating your friends, and deliver your ill-gotten eggs to eager researchers who’ll inevitably create some sort of mega-worm (you know how mad-scientists like to get down).

All in all I think Terror Below works really well, with lots of chaotic, wormy mayhem.  It’s fun, silly, and definitely worth checking out. If you’re a fan of the classic movie Tremors then this is an epic pick that will have you deviously plotting your friend’s demise at the jaws of totally-not-a-graboid. But if you don’t enjoy the player vs player aspect, or if you have no idea what a graboid is, you can definitely still have a good time with Terror Below. With some clever plays, you can actually keep the worms at tentacle’s length for most of the game and what was before a contentious game can become more of a precarious race as everyone does their best to avoid the worms. It all depends on how everyone decides to play.

But let’s be honest – you’re going to try and get a worm to eat your friends. 😉