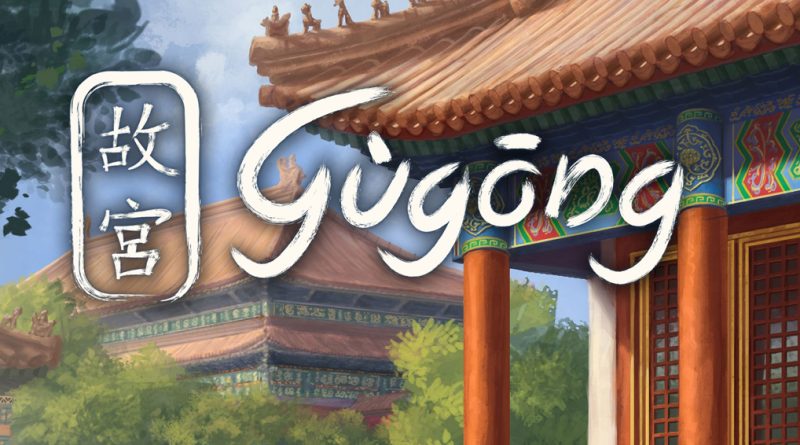 Gùgōng is a brilliant game, gorgeously presented.  It's a unique twist on hand management and worker placement, delivering medium-weight gameplay that is delightfully accessible while also engagingly thinky.

Right up front, I’ll do a bit of spoiling here; I was surprised at how much we enjoyed Gùgōng.  I’ll be the first to admit – we rarely tackle heavier games.  It’s not that we don’t enjoy the denser gameplay of more strategic games, it’s just that, well, we play a lot of games, often at odd hours, and it’s always a question of how a given 90-to-120-minute block of potential gameplay is going to get invested.  That could be 2, maybe even 3 other games!

Well, to our surprise and delight, Gùgōng showed up with lots of little decisions, multiple point-scoring opportunities, and a pile of elegantly-interlinked concerns that delivers a delightfully engaging experience, all the while looking absolutely gorgeous on the table! 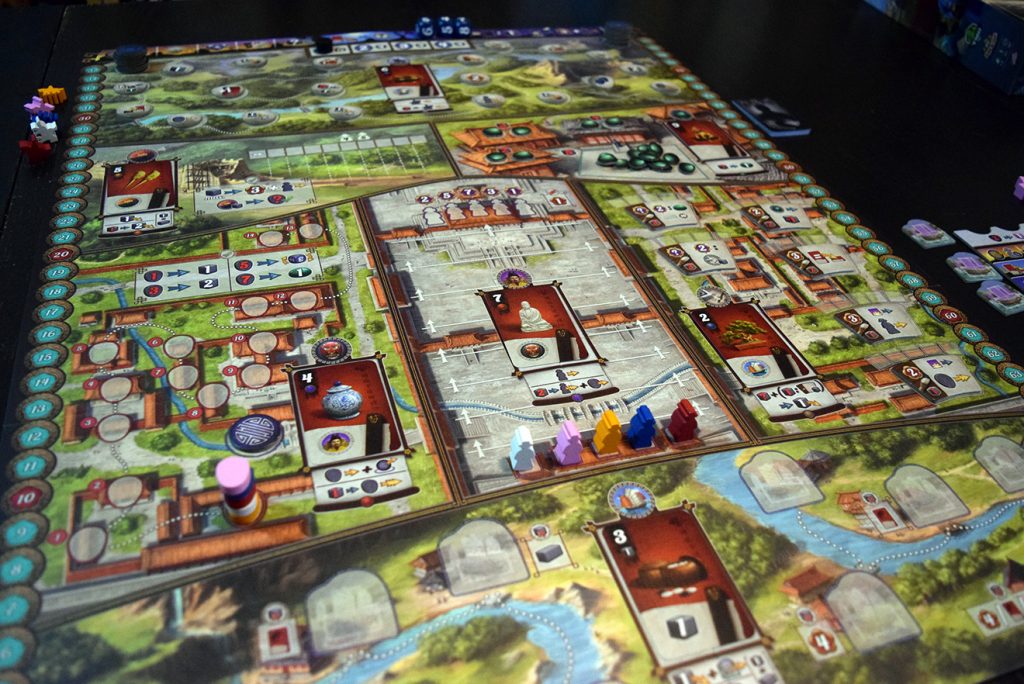 Gameosity received a review copy of Gùgōng.  The game had a fairly spectacular Kickstarter campaign that added lots of deluxe bits, but all photos shown are of the retail version of the game.

In Gùgōng, players will compete with each other to gain control and influence over the court of Ming Dynasty Emperor (who has completely outlawed ‘corruption’), waging subtle political warfare with the most traditional of weapons – hefty bribes, thinly disguised as gifts! 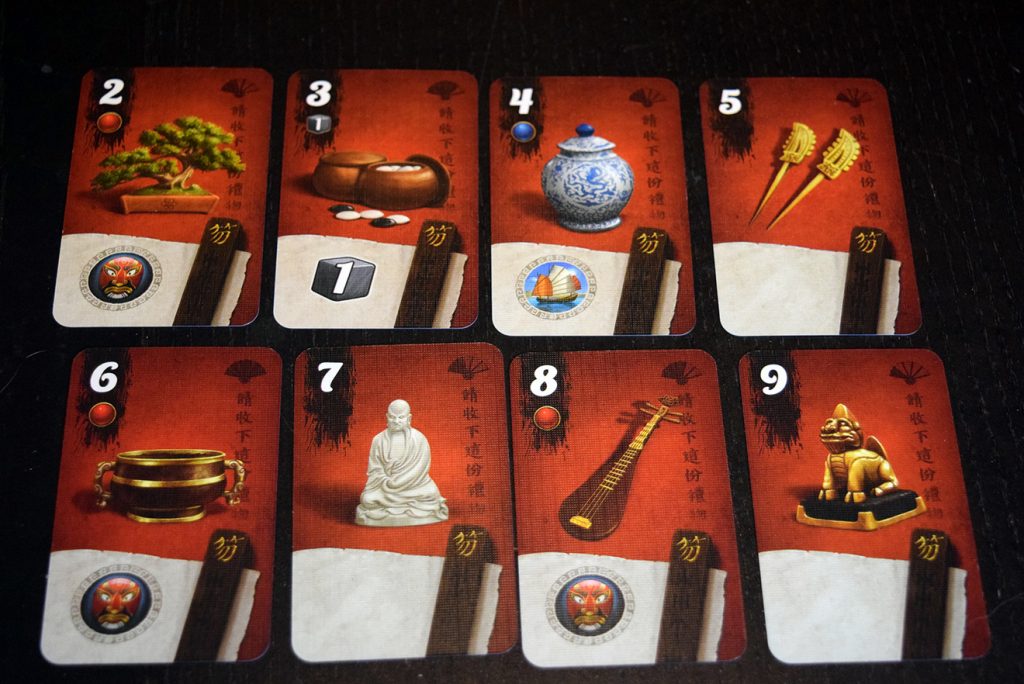 Over the course of Gùgōng’s deceptively short 4 rounds (which each consist of 4 player turns), you will spend your precious resources to advance your agendas and gather influence in court. You’ll spend both gift cards from your hand as well as servants from your supply to activate the 7 actions where influence and advantage can be gained.  Here’s a brief summary: 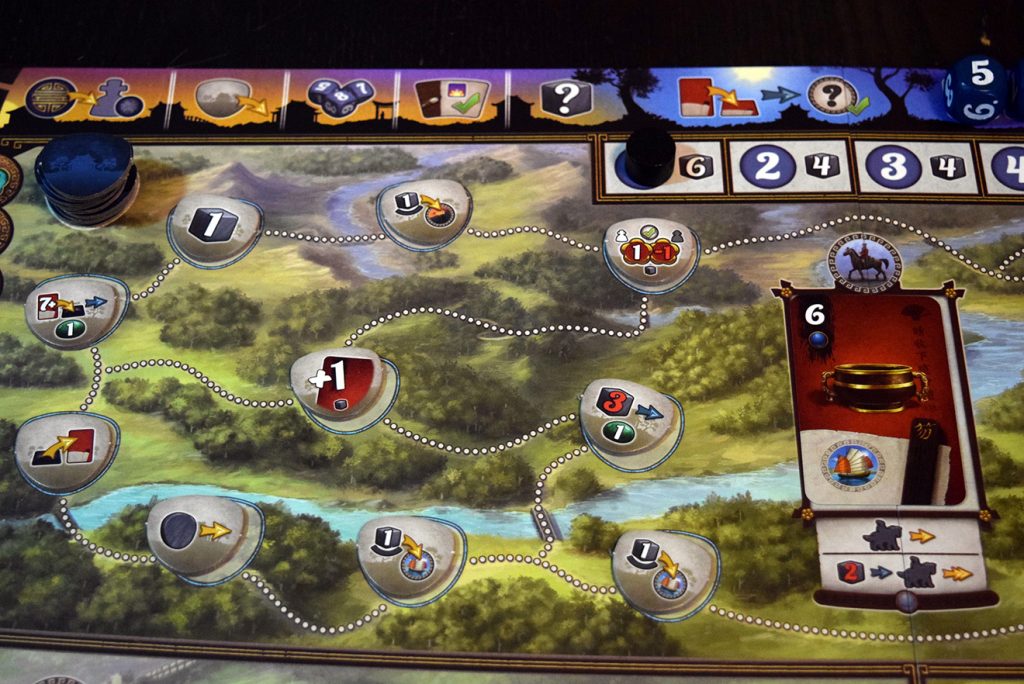 Gathering taxes from various cities – Travel tokens are randomly distributed to the cities, and you’ll get the benefit of them as soon as you stop to pick one up.  You can also spend those tokens for other things, such as points and hired servants. 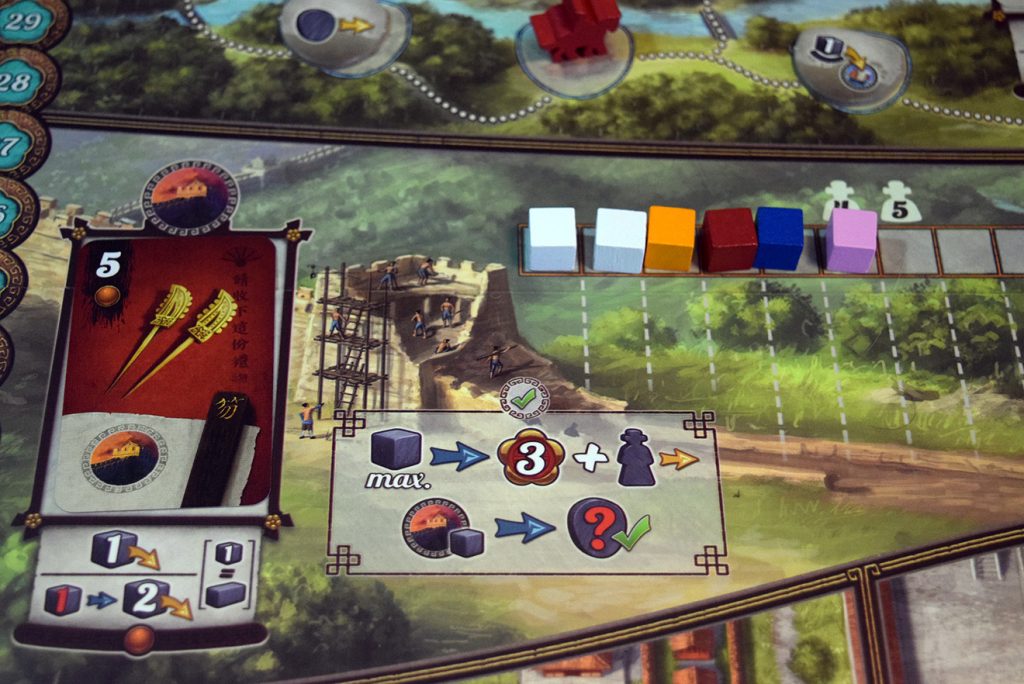 Contributing to the construction of the Great Wall – By sending your servants to assist with the Emperor’s wall, you can gain victory points as well as gaining influence over palace intrigue. 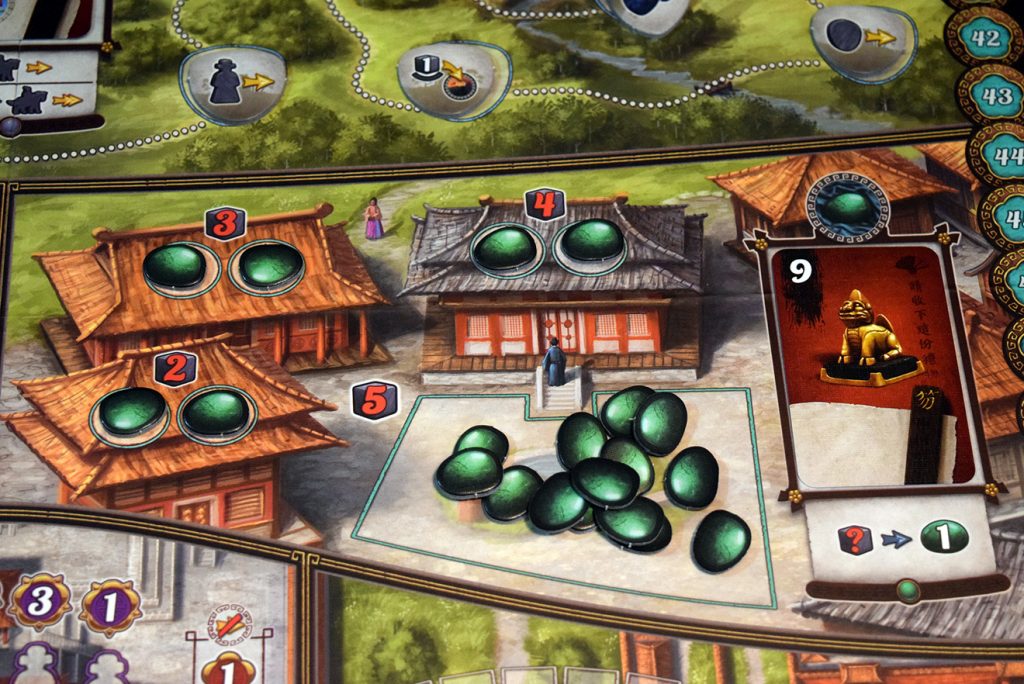 Collecting precious jade – Sets of jade tokens can be a potent source of victory points at the end of the game.  The earlier you can manage to hit the market, the fewer servants you will need to commit to your purchase. 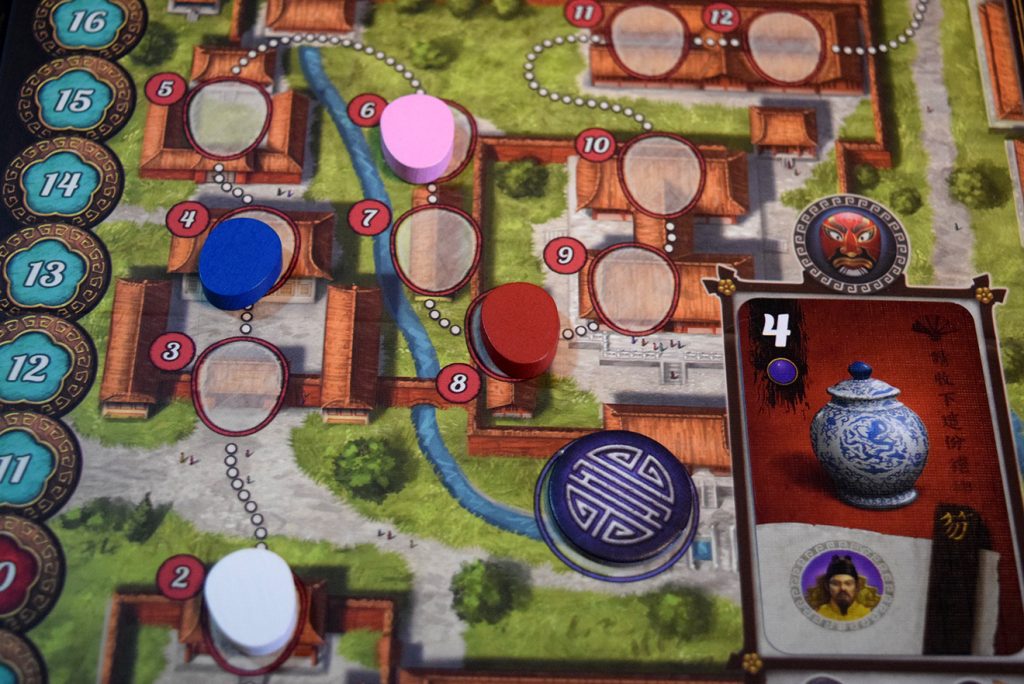 Participating in palace intrigue – In addition to moving the first player marker, the Intrigue track acts as the tie-breaker mechanism for other actions in Gùgōng.  As a bonus, whenever the Great Wall scores, those with high Intrigue can cash in that influence for various effects. 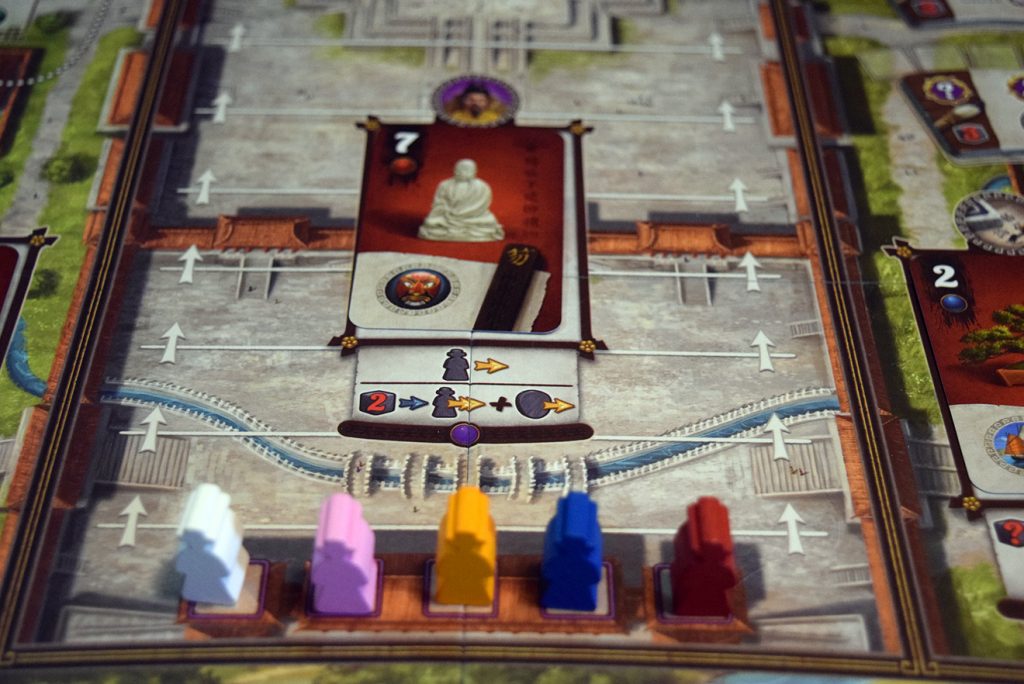 Exerting influence in the Palace of Heavenly Purity – Climbing the path to the Emperor himself is an absolutely critical part of Gùgōng.  Those who enter the palace will gain points, but those who do not simply cannot win the game. 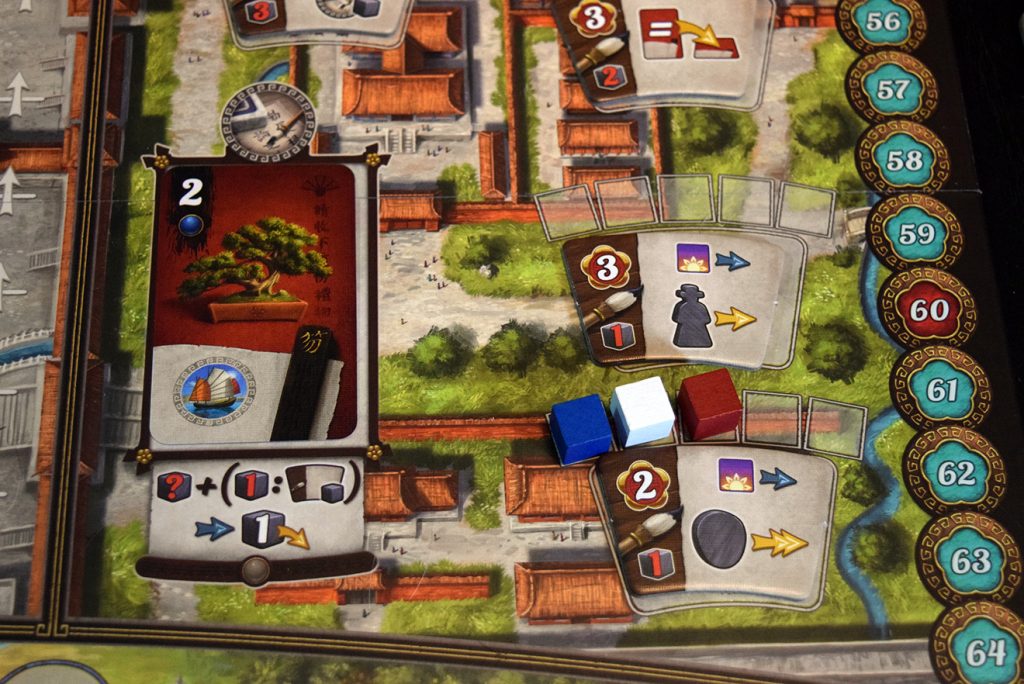 Enforce Imperial Decrees – Once issued to a player, decrees give either ongoing bonuses or end-game scoring opportunities.  Grabbing one early means reaping the reward longer, and will avoid the ever-increasing cost in servants that accrues as the game goes on. 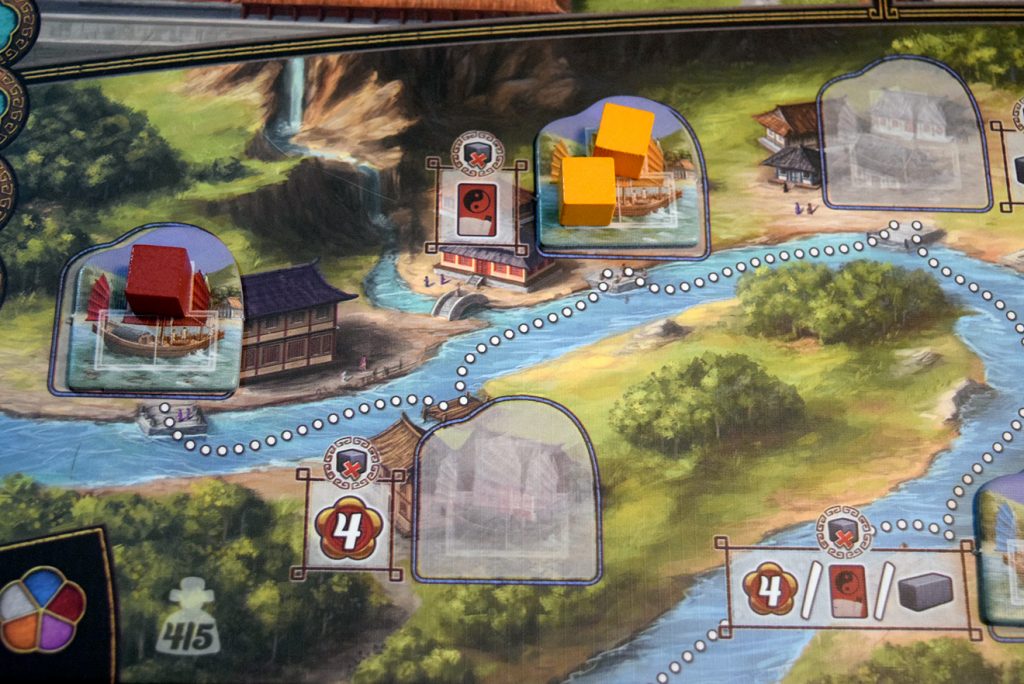 Move your ships down the Grand Canal – As your ships move down the canal, your servants can bring back valuable bonuses and points.  However, the longer you delay your ship’s return, the more valuable the reward!

Wow, those are a lot of options! But to be honest, once you get into the groove of Gùgōng , it’s not nearly as intimidating as it first looks. The iconography is awesome and the puzzle of the game isn’t trying to figure out what you can do, since all the actions are powerful and potentially valuable, but what action will serve you best.

And that puzzle is driven by Gùgōng’s central, highly thematic mechanic – those gifts we mentioned previously.  In Gùgōng, all of the action spaces must be activated by exchanging a card from your hand with the card present in that space.  Every turn, you must exchange cards with one of the 7 spaces.  If the card you place is higher in value than the one you take, then great, you’re good to go.  But if the card you place has a lower value than the card you’re taking, you will either need to discard additional cards or servants, or skip taking actions altogether.

As long as you’re not skipping your actions, you can take either the action on the card you placed, the action of the space you’re placing, or both!

And that makes for a really interesting decision each and every turn. There’s always this tension – ideally, you’re always placing a card in such a way as you get to take two actions you want. But the numbers won’t always allow it.

Not only that, but dropping big numbers isn’t always ideal – yeah, you get to take a couple of actions, but the next person who wants to use that space has to deal with that card – including you!

And not only that, but if someone just wants to pick up that big 8 you just dropped, they totally can! So as you’re taking your actions, you’re also seeding the resources for future actions and a challenge for future actions. It’s awesome!

The card churn (along with the presence of some dice) does add some randomness, which is somewhat surprising for such a strategic game, but honestly, we think it makes for a better experience.  While there are lots of potential actions, you’re always having to adapt to the cards in your hand and the board state. 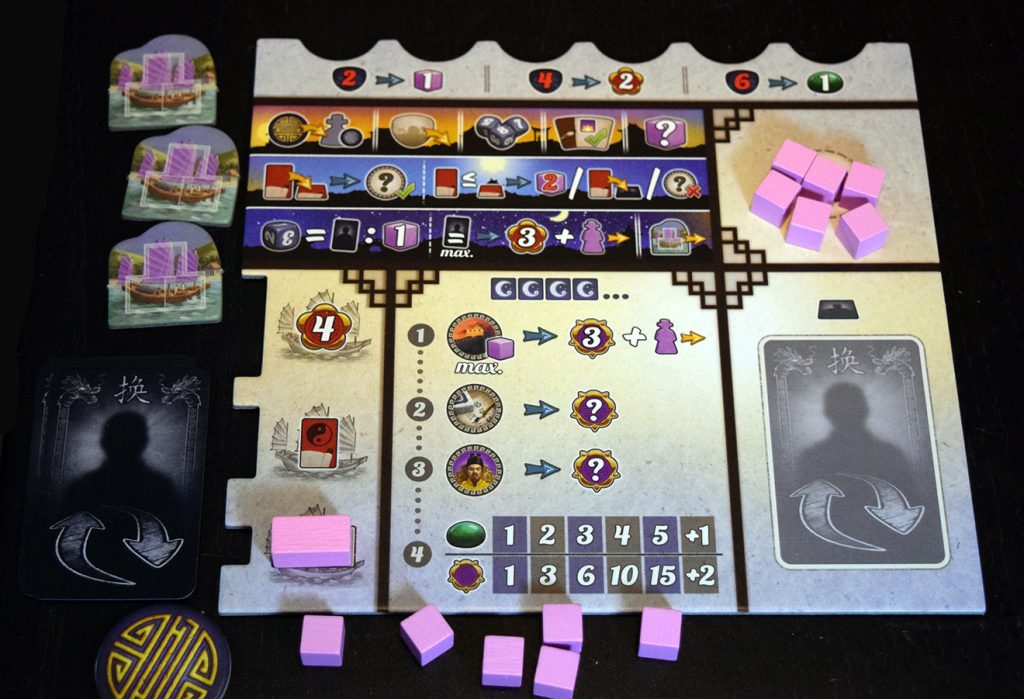 That also means you’ll want to diversify your interests.  While advancing the Palace of Heavenly Purity is the only absolutely required objective (if you’re not in the palace by the end of the game, you literally cannot win regardless of your score), all the other paths to points feel valid. 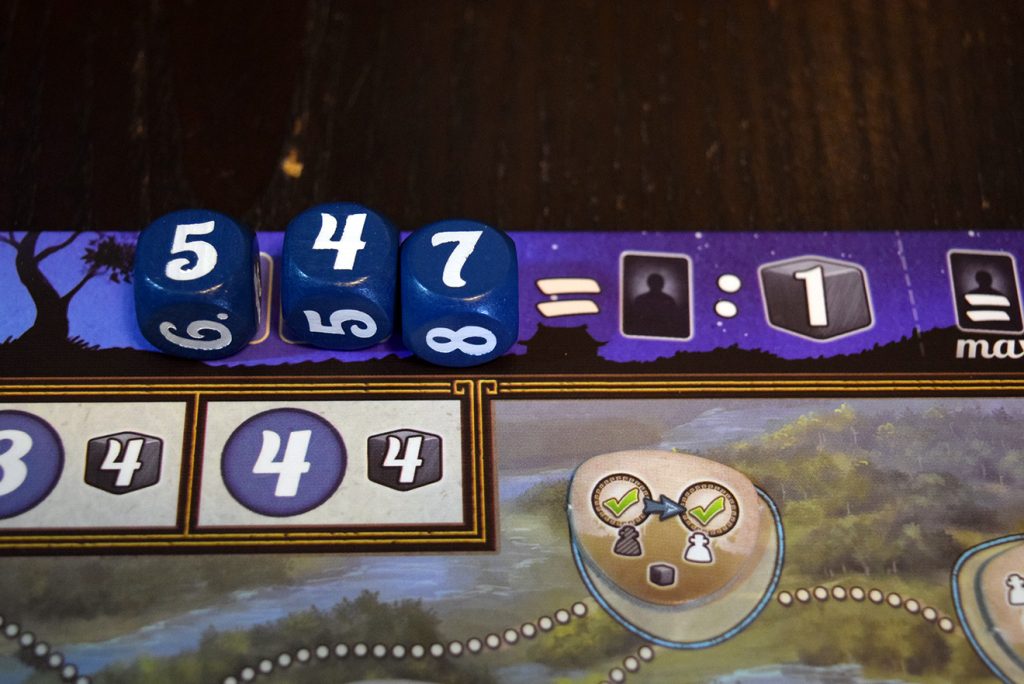 Specializing doesn’t always work out well, and while spreading yourself too thin across the board can leave you short on resources, keeping your interests diverse means you’ll get points from a lot of different places, and more actions feel viable.

So, bottom line, I really liked Gùgōng . There is something at work here that feels both elegant and accessible, and all the game’s little systems work really well together.

Totally agreed! Gùgōng is heavier than most of the games we play, but not in a way that made it unfriendly. There’s great indirect tension between players because everything they do can potentially make your plays harder, but then again, they can also be setting you up for success, so it all levels out!

We keep saying that Gùgōng is ‘heavier’, but by that all we really mean is that its more commitment of time and mental energy than other, shorter games.  The decision space in the game is fairly straightforward, and we had a fantastic time exploring it.

The bottom line is that Gùgōng is a great game – there is something at work in the design that felt brilliant, and we absolutely enjoyed engaging it.  And in case it wasn’t clear, we highly recommend you checking it out!