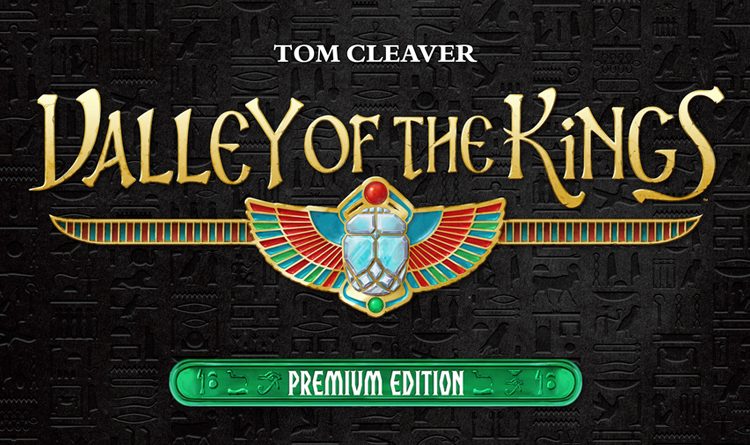 Valley of the Kings: Premium Edition is the definitive version of a really interesting little deckbuilder.  This significantly larger reprint does a good job of honoring Tom Cleaver's clever game design, and we really like the upgraded card size and cleaner aesthetic.

Over a year ago, we did a Game in a Minute on Valley of the Kings, a compact, clever deck builder that we really liked (and still do), marveling at how much unique gameplay designer Tom Cleaver managed to pack into such a small package.  Back in April of 2019, publisher Alderac Entertainment Group ran a successful Kickstarter campaign to reprint both the core game and its expansions, upgraded with larger cards, bigger art, and the addition of variable player powers.  Having started with a solid game to begin with, is the Premium edition really an improvement?  Or should it be buried alongside other bloated reprints?  Well, don your excavation gear and your curse-proof charms as we unearth the secrets of Valley of the Kings: Premium Edition!

Gameosity got a review copy of Valley of the Kings: Premium Edition

For the uninitiated, a quick summary of Valley of the Kings: Premium Edition goes something like this.  In Valley of the Kings: Premium Edition, players are competing to be buried with the most valuable assortment of cards (talk about long-term planning), and they will do this by using their cards to purchase more from the market.  Each player starts with an identical deck of cards, and as they add more cards, they will be able to use the cards’ unique powers to their advantage.  Some cards enhance buying power or let you draw additional cards, while others affect your opponents’ hands and decks.

The market has a unique ‘crumble’ effect; shaped like a pyramid, players can only buy cards from the lowest row, and as they get purchased, higher up cards fall down to fill the spaces in.  It’s a neat mechanism for giving players a preview of what cards are coming up for purchase without giving a clear indication of how quickly they will be available.  Intentional manipulation of the pyramid can put you in a position to buy just the card you need, but doesn’t complicate gameplay too much.

The central concept of Valley of the Kings: Premium Edition, the thing that makes it so darn clever, is the fact that cards are worth absolutely nothing as long as they are in your deck.  In order to score points for the card sets you’re purchasing, you’ll have to bury them, which is to say permanently remove those cards from your deck, placing them into your tomb.  Once there, they will contribute to your score at the end of the game, but, of course, will no longer be accessible for use. 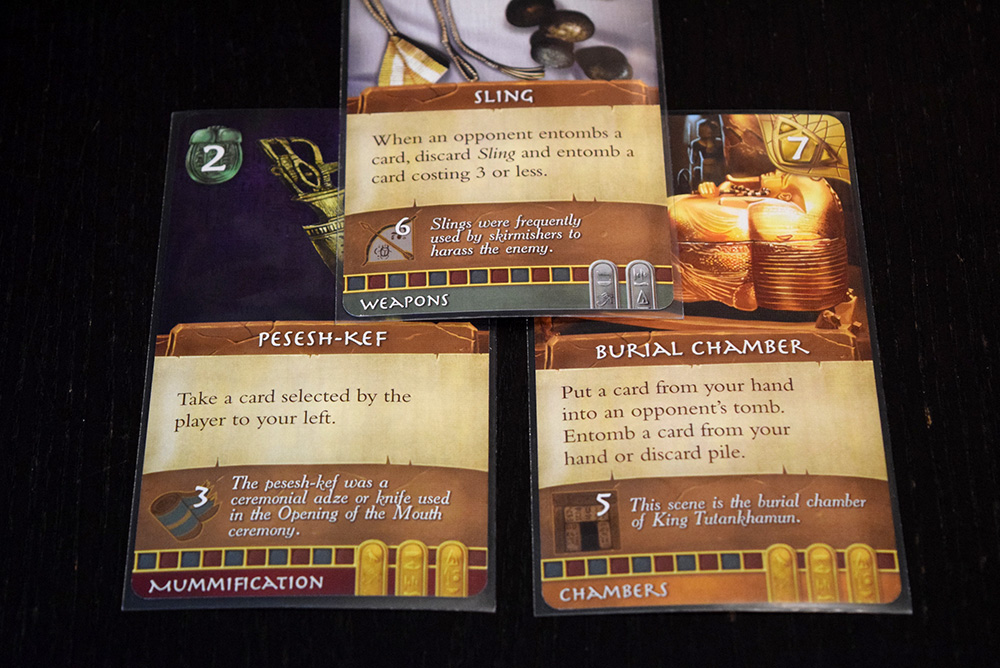 Jess
It’s sooo smart! Of course you want to grab powerful cards so that you can use their abilities, but if you wait too long to entomb them, then they won’t help you score any points. It’s a great balancing act!

Andrew
I totally agree with you. Valley of the Kings is an excellent game, and that push-pull of adding and removing cards can be incredibly engaging and tight. Nothing worse than the game ending just before you manage to bury a key card or two, aside maybe from burying them too early and missing out on the advantage of having bought them at all!

So that’s a brief summary of the original Valley of the Kings.  It’s an incredibly clever deck builder that thrives on card combos and smart timing in how you’re both adding cards to and pulling cards from your personal deck.  The original was followed up by 2 standalone games, Afterlife and Last Rites, each of which brought subtle changes to the core gameplay without really upending the formula.  They all came in delightfully small boxes which turned a great game into a great portable game, and overall we have enjoyed playing Valley of the Kings for quite some time now.

But what about the current printing of Valley of the Kings: Premium Edition.  Is it truly Premium?  Well, here are some of the major differences between it and the original: 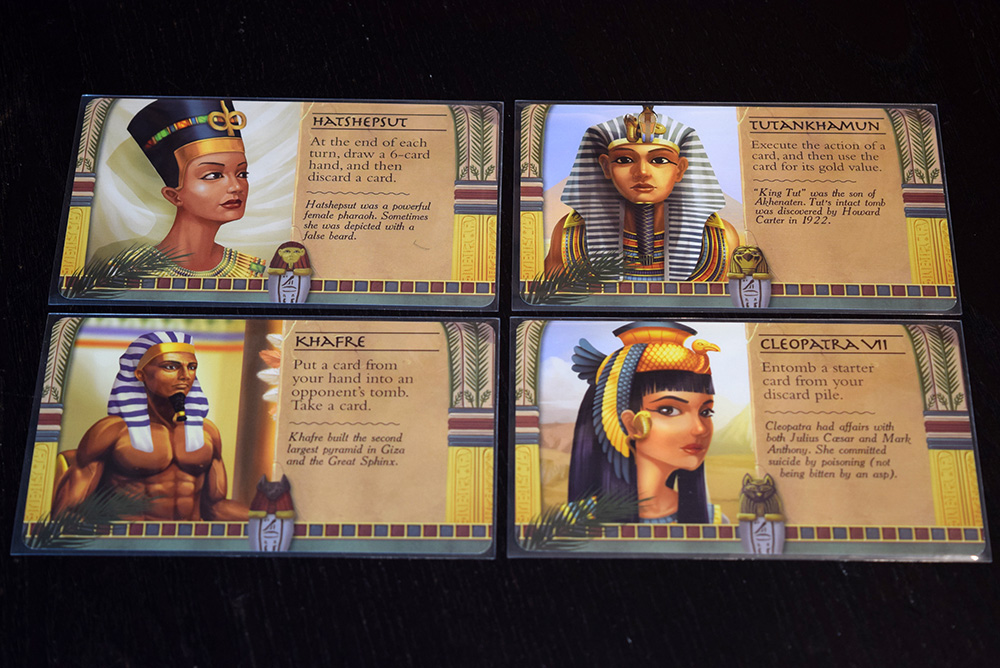 Andrew
So the thing to keep in mind here, clearly, is that Valley of the Kings: Premium Edition is a reprint, first and foremost. Aside from the Pharaoh cards, which are an awesome addition, it changes nothing about the game itself. All it really does is make things bigger. 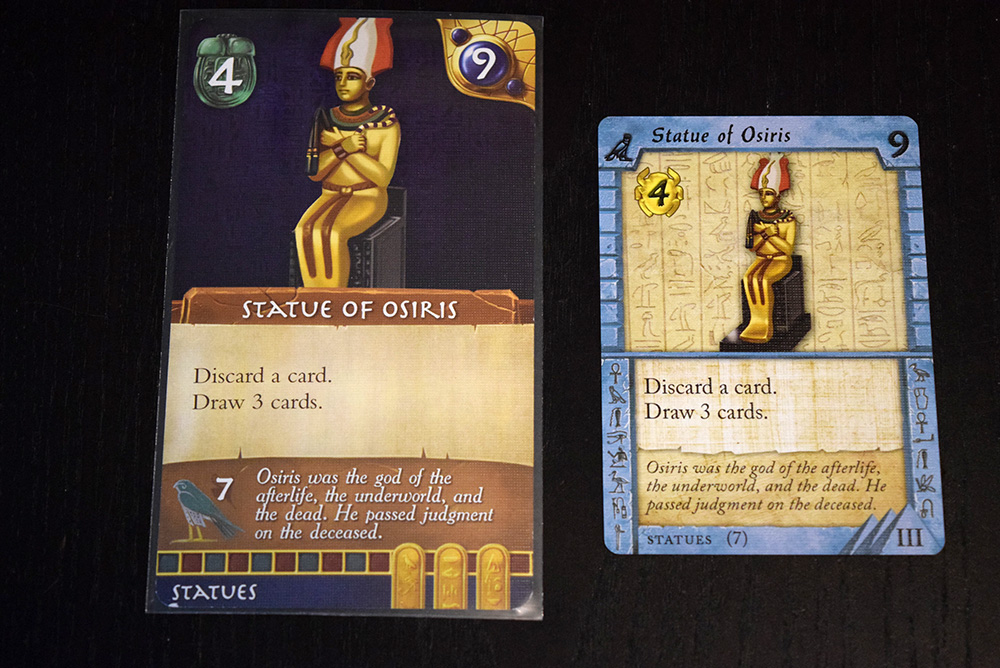 Jess
And that’s definitely a ‘your mileage may vary’ sort of thing. Personally, I love the bigger cards and the fact that you get everything in one box!…I just wish that box had been half as big, you know? 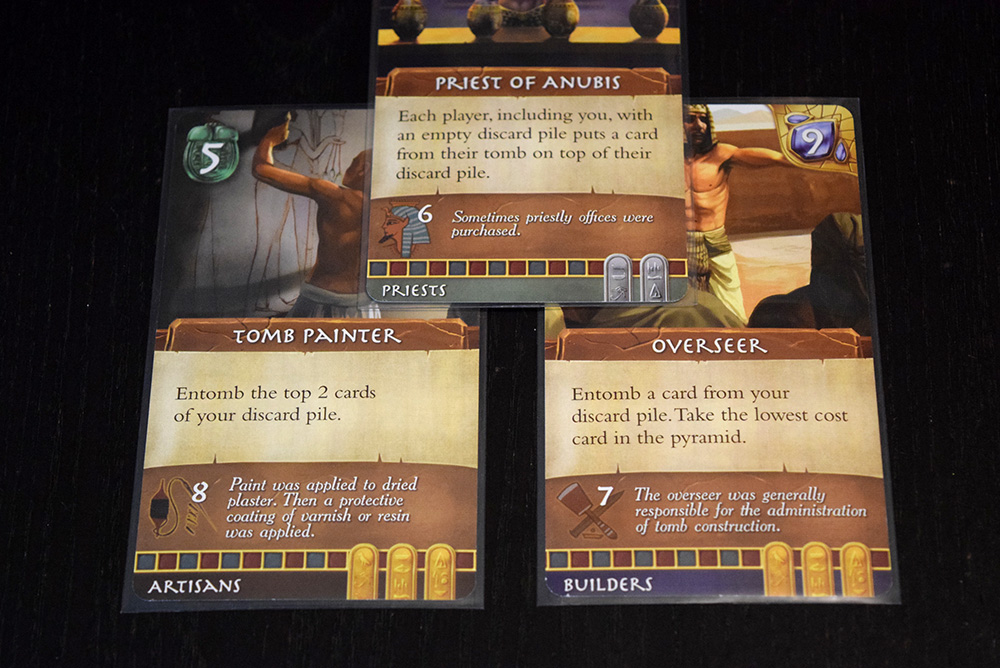 We don’t talk about cost much on Gameosity, because what is affordable or ‘worth the money’ for one person can vary wildly from another.  So the fact that Valley of the Kings: Premium Edition‘s price tag has grown to reflect both the inclusion of 3 games and the larger cards isn’t something we’ve got a strong opinion on, aside from simply acknowledging that it’s happened.  That said, Valley of the Kings: Premium Edition isn’t actually more expensive than it was for us to get the 3 games in their original state, so there’s that to consider. 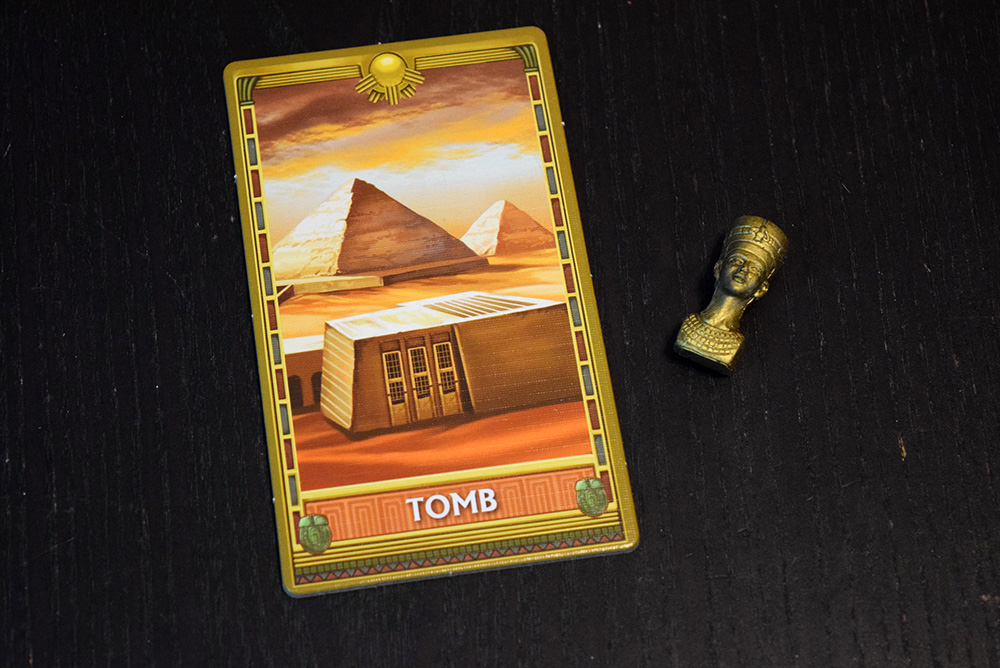 Jess
Exactly, yeah. The nicer cards and the Pharaohs might make the case for some, but for me, I’m just happy to see such a solid little game get the not-so-little treatment.

Will we miss the small box?  Sure, of course we will – being a small, relatively affordable game made it very easy to recommend Valley of the Kings.  In this bigger package, it’ll be much less of an impulse buy/stocking stuffer.  But the value of the game itself is still rock solid, and the variety that this presentation brings means that you’ll be able to play Valley of the Kings: Premium Edition the way your group wants to play it.

And most significantly, Valley of the Kings: Premium Edition is the only way you’re likely to get Valley of the Kings these days.  Unless we’re mistaken, the small box printing of the original isn’t readily available at this time, so if you want to add this excellent game to your collection (possibly to be entombed with you for all eternity), you can take pleasure in knowing that you’re getting the definitive version of a really great game.