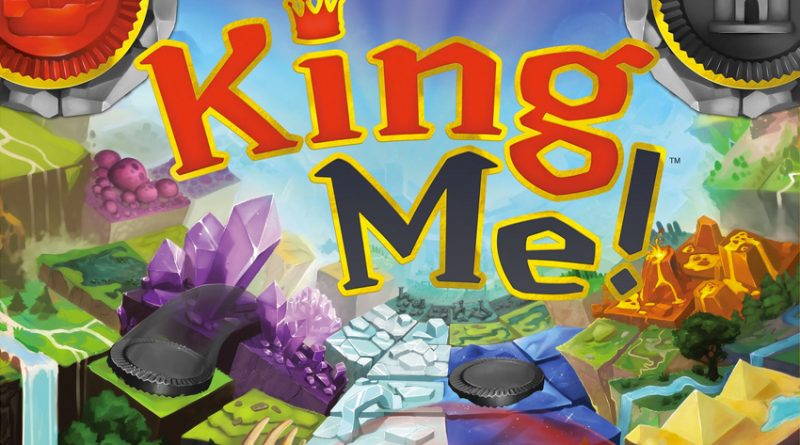 King Me! shows up with some neat ideas, a brightly-colored board, and a concept that got us excited, but didn't quite deliver on gameplay.

King Me! is a great example of how tough it can be when you try and reinvent the classics.  While there are literally thousands of new board games published every year, there are some that endure the test of time, nearly unchanged from the moment of their invention and certainly locked in amber from many of our collective childhoods.  Of course, being a classic absolutely doesn’t mean a game is great (or even good) or that it shouldn’t be tinkered with, but you’ll always have an uphill struggle with these designs – too much change and you’ll lose the purists who value the original, not enough innovation and you won’t attract those looking for something new and fresh.  And in that way, my indifference towards King Me! isn’t a function of it being a bad game, only that it falls squarely between those two criteria, failing to meet either. 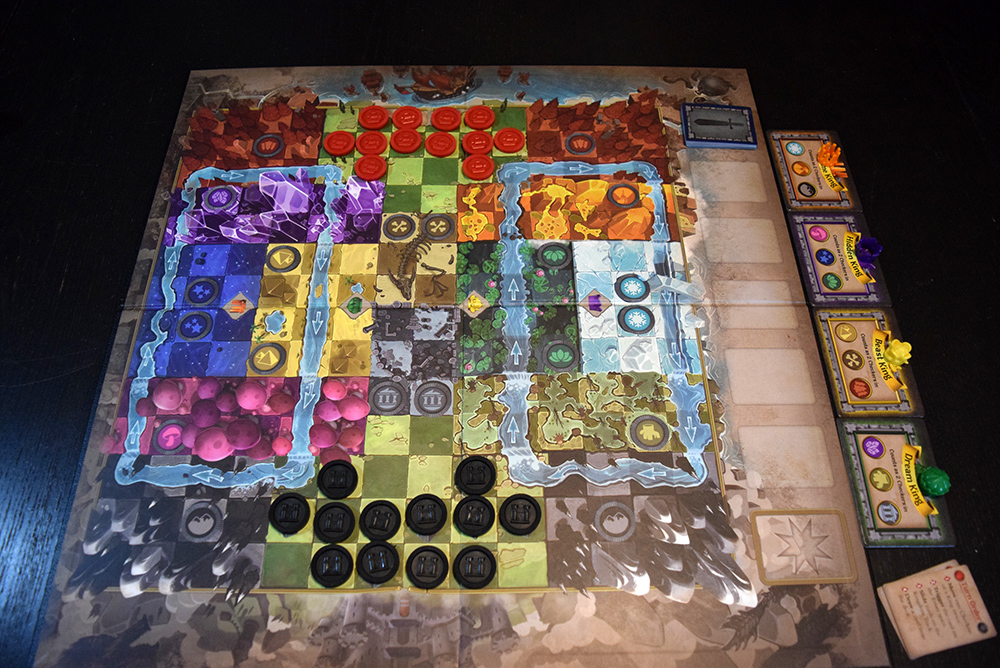 We received a review copy of King Me!

Now, I’m going to try not talk about checkers much, both because King Me! deserves to be discussed based on its own merit, and because I don’t want to give the impression that all the ‘meh’ I feel about it is because of its similarity to/differences from checkers.  So to be clear, King Me! isn’t a re-skin or re-theme of checkers.  It’s checkers-inspired.  Checkers-adjacent.  But the similarities are more than just the flat, circular pieces. 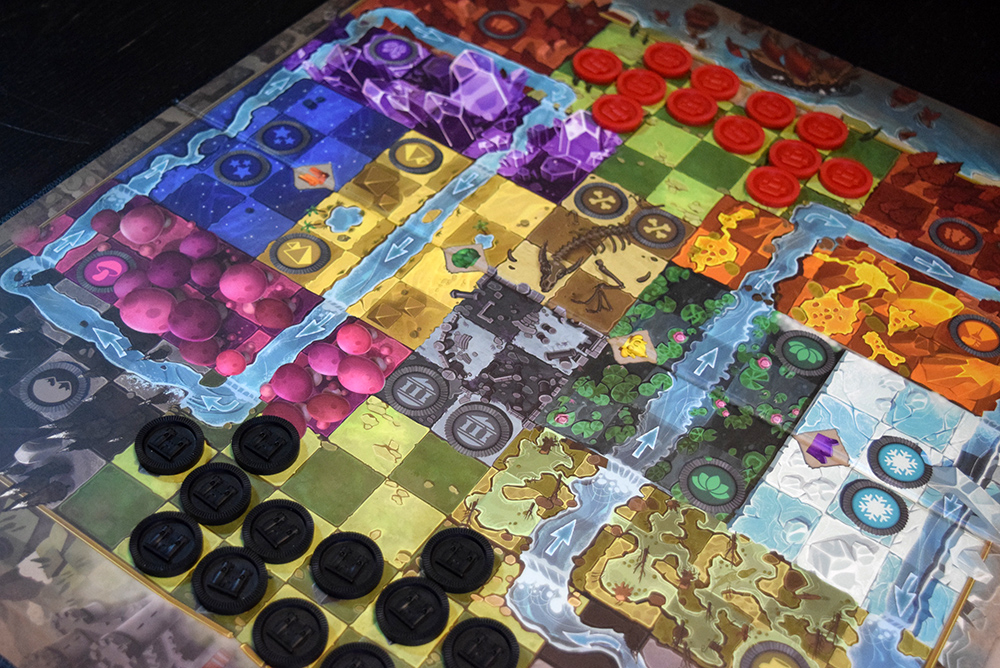 First, as I just mentioned, King Me! is mostly an area control style game.  Two players will take on the roles of the Crimson Kingdom and the Onyx Empire, each vying for control over the…board, I guess, because that’s basically the full extent of the flavor text in this virtually pure abstract game.  Which is fine, because in practice, you only need to know that you and your rival will have an army of checker pieces that you will move across the board, trying to hold majority control over each of the different areas as they come up for scoring.  The player who manages to earn the most points from majorities and capturing enemy pieces is the winner. 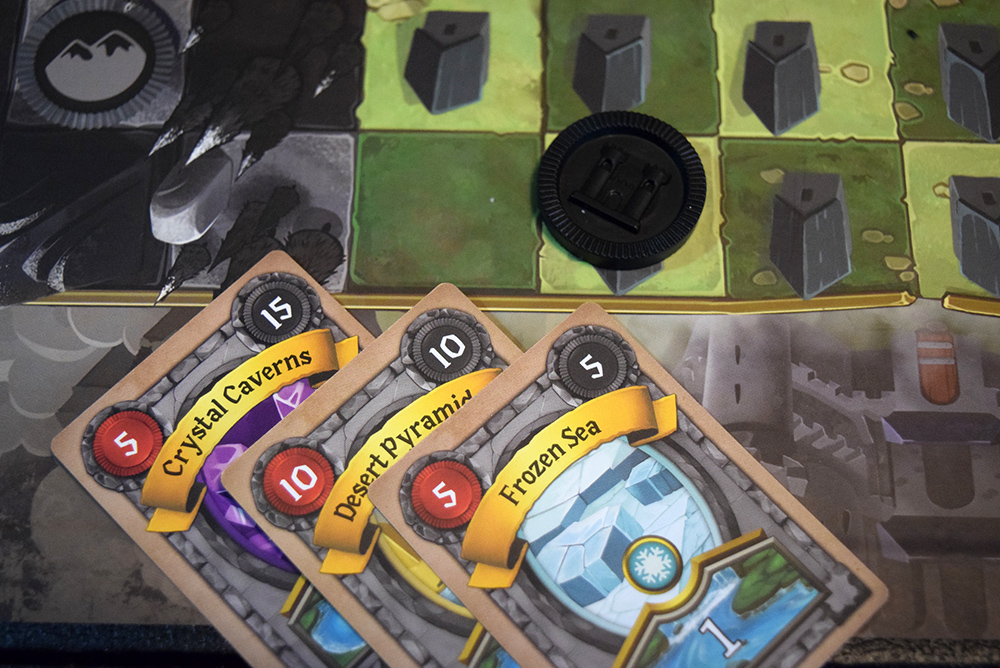 Movement is, of course, based on diagonal hops.  Every turn, you will move 2 pieces 1 space apiece (unless you’ve got a king, but more on that in a second).  You can move in any diagonal direction as long as you land in an unoccupied space.  These moves can be extended by hopping over any combination of friendly and opposing pieces, or the stone checkers scattered over the board. By creating chains of checkers, you can move pieces fairly quickly, though those chains are vulnerable to attack from your opponent, since any checker hopped over by an enemy piece gets permanently captured which is, again, classic. 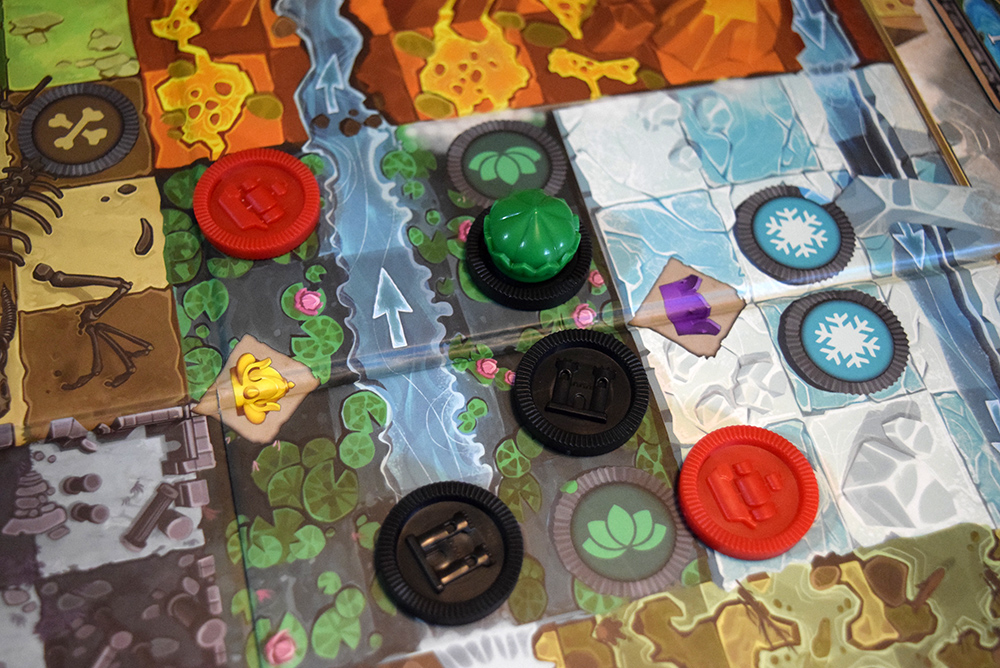 Every round, the cards in the Kingdom Track march on.  These cards do two things.  Firstly, they indicate the intensity of the river that surrounds the kingdom – any checkers on river spaces will move automatically the number of spaces indicated on the card.  This can be a powerful way of moving pieces without needing to spend your actions on it.

The other thing the Kingdom Track handles is the triggering of scoring.  When a territory card reaches the end of the Kingdom track, that territory is scored.  Whichever player has the majority control over that space gets the territory card.  Territories further from a player’s starting side are worth more points to that player, and any king pieces in the region break ties. 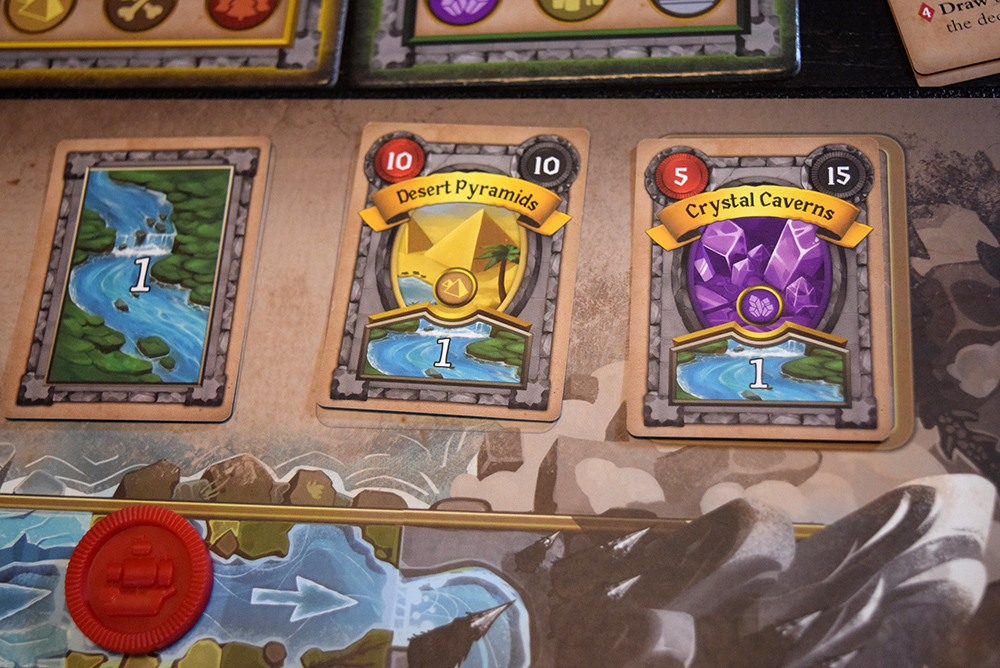 And at this point, we should mention the titular kings.  If you can end a checkers’ movement in one of the 4 king spaces, you can claim an available crown.  King pieces can break the 1 move per turn rule, including the turn they become kings, and are each tied to 3 terrain types across the kingdom.  When a king is in their own terrain and that area is scored, they count as 2, making it easier to hold majority.  Kings can be captured in the usual manner, and the capturing piece becomes the new king of that type. 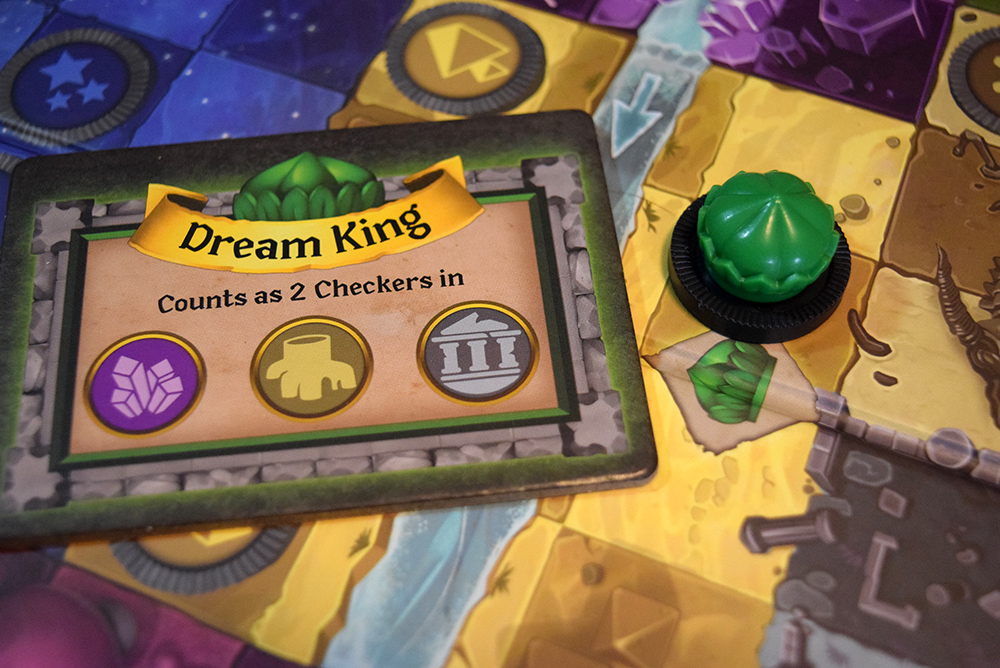 Once the Kingdom deck is exhausted, the game is over.  Players will score points based on the terrain cards they claimed, enemy pieces they captured, and any kings they control.  The player with the higher score wins.

So that’s King Me!, and honestly, I really wanted to like this one.  I love abstracts, especially 2 player ones, and the bright colors and nice production made it look way more engaging than checkers (a game that really doesn’t do much for me, if I’m to be honest).  But at the end of the day, King Me! fell short in a couple of ways that, for us, made it a bit of a disappointment. 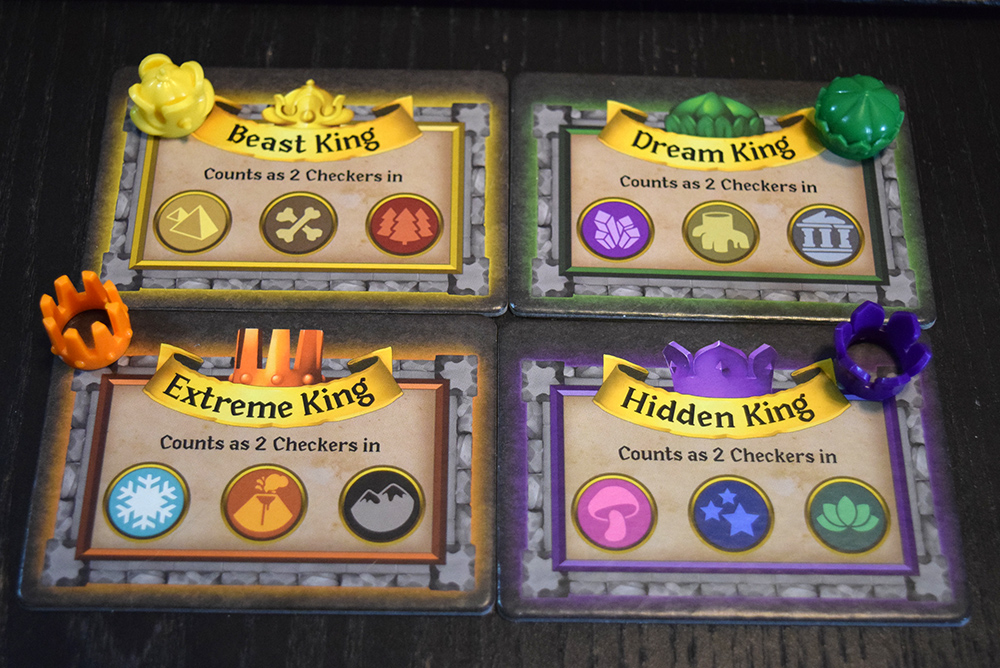 First and foremost, we found a lot of scoring rounds went by when one player or the other (or even both) simply couldn’t get to a terrain within the turns necessary to get there.  The Kingdom track does give players a few turns warning of what’s coming, but ultimately, movement is surprisingly slow in King Me!, and even smart use of the river often can’t get you where you need to go.  And that means that some areas are scored without contention while others simply aren’t scored at all, and that’s not fun.

But the biggest shortcomings are the kings themselves.  They just aren’t cool or powerful enough at all.  In a game where location and movement are everything, a king’s big advantage is that it can move twice, which can be occasionally useful, but is hardly particularly powerful.  And while breaking ties is nice, if a king isn’t in their native terrain when it scores, well, that ‘counts as 2’ advantage means nothing.  I wish there had been more excitement when someone got a king – maybe if it always counted as 2 and could teleport between its native terrains or something – but as it was, when one of us managed to snag one, it rarely changed hands and rarely made much of a difference in scoring.

Beyond these two criticisms, we generally just felt like King Me! was a bit of a flat experience.  For a game with such simple rules, it could be surprisingly slow, as we plodded our little pieces along the too-large board, something which also meant that conflict was surprisingly minimal.  At the end of the day, I really liked the idea of King Me! more than its execution, and while I can’t say this one is a keeper for me, I hope that there will be some checkerheads who will get a kick out of it.  But for us, it simply didn’t go far enough down the route of innovation, while not sticking close enough to what its abstract roots did well.