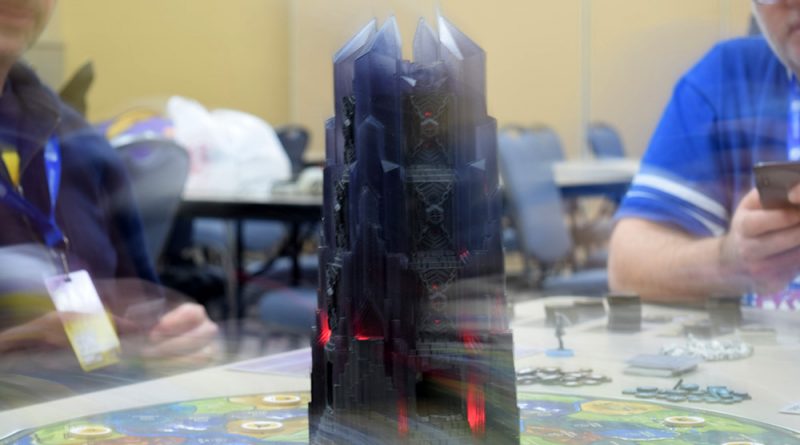 When released in 1981, Dark Tower was a technological marvel in the board game world; incorporating a small computer in its’ intimidating tower to allow for a surprising level of complexity and immersion. The computer assisted in gameplay and occasionally played ominous music to cue important moments in the game. Doing what they do so well, Restoration Games has taken this artifact of the 80’s and worked tirelessly to resurrect the Dark Tower, in the next chapter of its story: Return to Dark Tower!

Jess
I never played the original Dark Tower, but I’ve heard the legends. Stories of lands plagued by bandits, plagues, and monsters. Rumors of a magic scepter held by a terrible tyrant and his tower from which evil spreads over the kingdom…

Please note, all pictures in this article are of the already-awesome prototype.  The tokens representing some of the buildings have already been replaced with neat-looking minis, so pay them no mind.

It’s no secret that Team Gameosity is a huge fan of Restoration Games’ previous work, and I’ve been eagerly awaiting the day when I could get hands-on with the game. And as luck would have it, this year’s Pax Unplugged finally put me in the same room as that spooky monolith . I sat down with Christina Rouse from Blue Peg, Pink Peg, Jeremy Howard from Jambalaya Plays, and David Waybright from Man vs. Meeple to test ourselves against the latest version of the tower.

Return to Dark Tower is a cooperative adventure/survival game. Everyone will get a character with unique abilities and starting resources, and will start in one of the several kingdoms which surround the titular tower.  Each time you play, you can face a different combination of challenges in the form of enemies, allies, monsters, and other storyline surprises, many of which are managed by the companion app that Restoration Games is developing alongside the physical game.  I think it’s really neat when a game manages to combine physical and digital elements, and from what I’ve seen of the prototype, Return to Dark Tower is already doing that amazingly well.

The goal of the game is to complete a quest that will breach the tower and then to defeat the guardian. In our game, we needed to find a few artifacts which were hidden away in the items deck. Distracting us from our main goal were two side quests to defeat the brigands and shadow wolves that plague the kingdom. Each turn these groups of enemies would run around attacking characters and making everything harder, so it was important to burn them down as soon as we could. Of course, another complication was the tower itself. 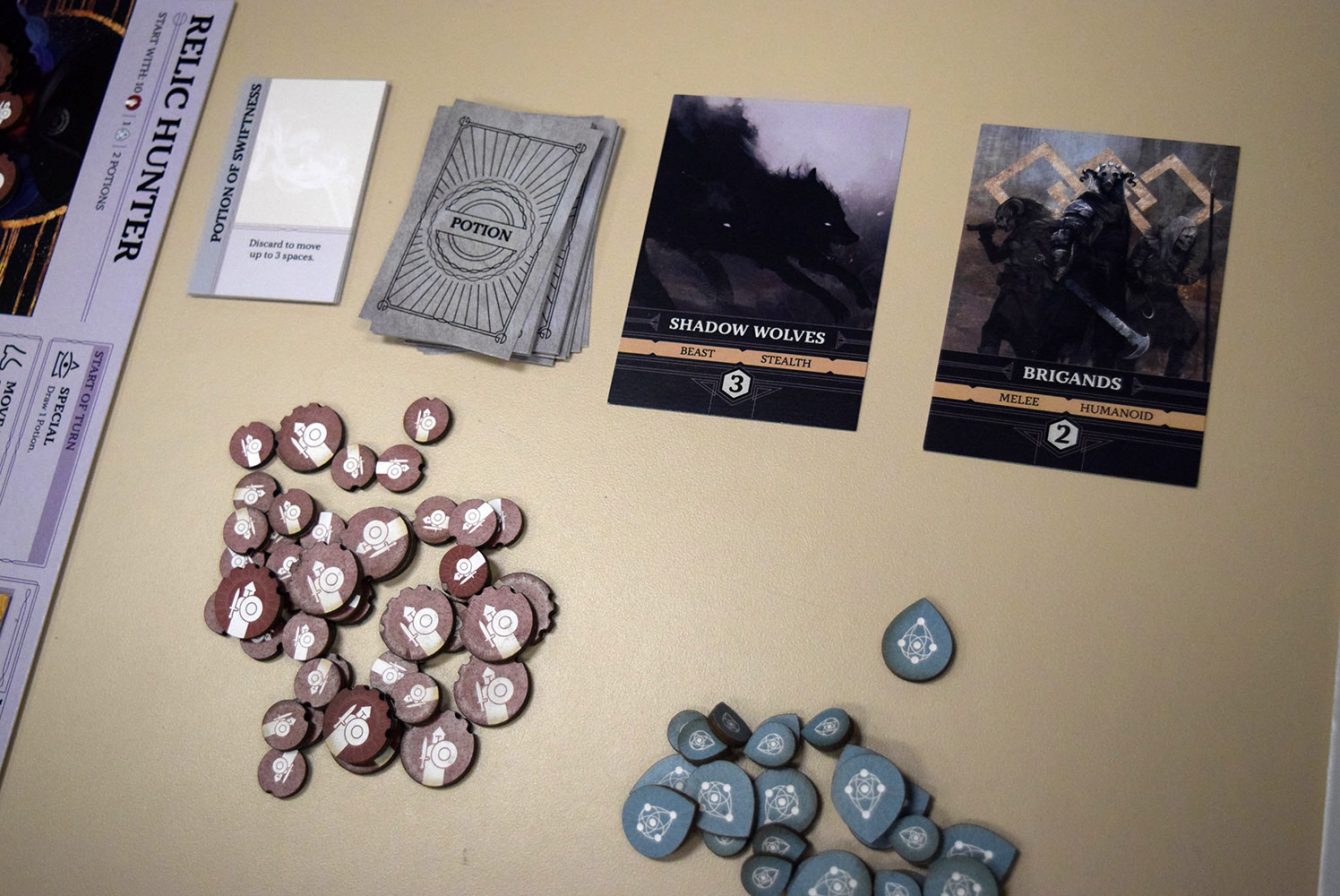 At the end of your turn, you need to add a skull to the tower, which you’ll do by dropping it into the tower itself, like the world’s most macabre dice tower. If the skull comes out the bottom, it must be added to a location in the quadrant the skull popped out on. Any skulls that mysteriously don’t fall out lurk in the tower, ready to flood the map whenever the tower decides it wants to punish you.

The skulls represent “Darkfire” (which is general badness) and a location can only hold 3 skulls before it is destroyed forever; giving the local hero a corruption. Keeping locations clear of darkfire is tough, as you only have a few actions each turn and limited turns before the end of each round. Finding a way to efficiently balance fighting monsters, moving, and cleansing darkfire means often letting skulls build on a location, gambling that you’ll have a chance to cleanse all of them in one go before the location pops. This push-you-luck element adds a great tension to the game and every time the tower lets loose another skull you feel a creeping dread begin to grow…

Everything about this game centers on that dread. There are multiple ways to lose in Return to Dark Tower (all the tower seals break, a hero gains a 3rd corruption, you need to add a skull to the tower and can’t, or you fail to complete the main quest in time). I never felt like we had enough time to get everything done, so strategic sacrifices had to be made. That said, the characters do have powerful skills that can grow over time. I started with the Orphaned Scion and, with my leveled up powers, if a skull landed in my kingdom I could immediately return it to the pool and whenever I cleansed a location I could also remove 1 skull from any other kingdom. I was a cleansing machine! 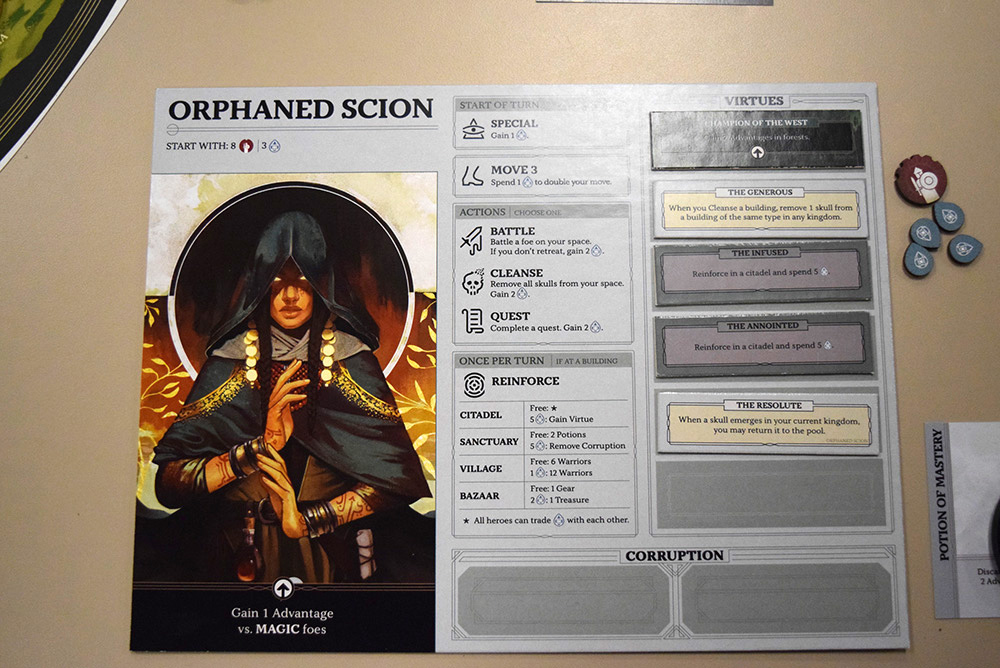 Finding ways to combine the party’s powers to pull off moves that built on each other was also very satisfying. One player had the ability to move enemies around while another was in a beneficial area to fight those enemies. By working together they managed to take a significant bite out of an otherwise impossible-feeling task, and the sense of teamwork around the table was a great counterpoint to the creeping dread of the tower’s machinations. 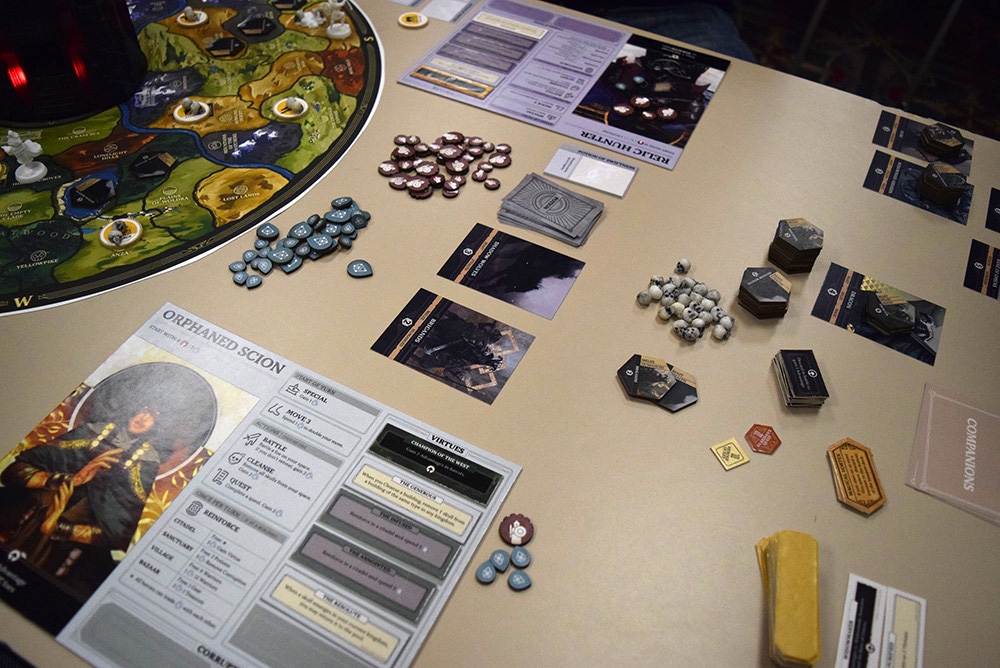 I don’t know how much things will change from now until the Return to Dark Tower Kickstarter which launches January 14th, 2020, but from everything I have seen so far I am very excited. The gameplay is fun and challenging, the art design is breathtaking, and the electronic portion of the game is pretty smooth. I was curious how much the actual tower would add to the game, but its’ distressing presence, otherworldly lights, and grim grumblings certainly help set a mood that will have you perched on the edge of your seat. I cannot wait to see the final design. This is a surefire campaign to back in my book. 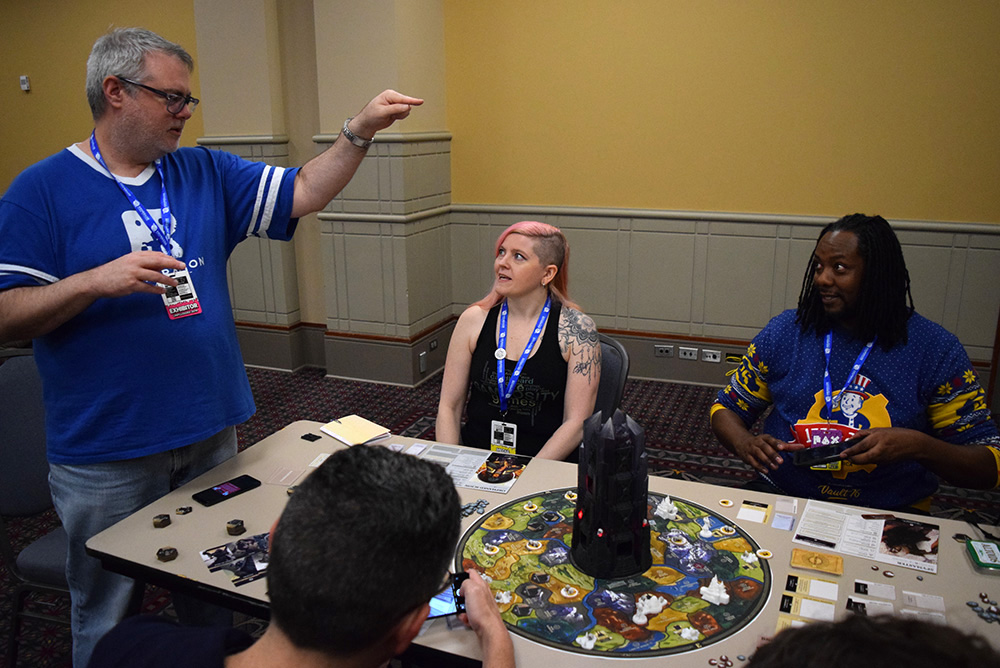 To sign up to be notified when the Return to Dark Tower Kickstarter campaign launches and receive the active player marker for free if you back for the game head on over to Restoration Games here.