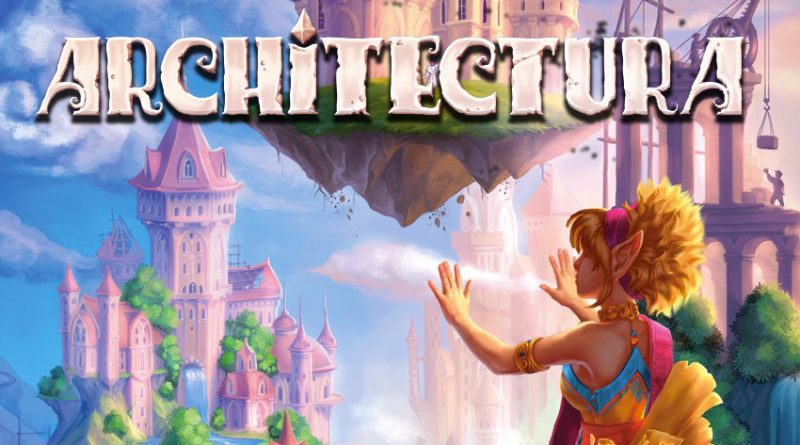 Architectura takes the city-building concept and condenses it into a neat tableau manipulation puzzle with a lot of potential interactions between players and some variable game setups that will keep things fresh.

There’s just something about a city building game that makes them go over really well here at Gameosity HQ.  So much the better if that game has nice art, accessible rules, and manages to pack a lot of gameplay into a relatively small box.  Well, Architectura from designer Pavel Atamanchuk manages to hit on all those criteria, packing some really solid gameplay into its modestly-sized box!

Jess
Now, the reason I like so many city building games is that win or lose, you end up having made something, and that satisfies the creative in me. Architectura doesn’t *quite* fit the bill there, but we’ll talk about that in a bit.

The truth is that the great artwork of Architectura barely hides a fairly abstract game.  While the box and art promise some vaguely fantasy-ish competitive architectural competition, your goal is to manipulate the tableau such that your cards are worth as much as possible, while devaluing the cards of your opponents as effectively as you can…like some sort of fantasy real estate competition.  And in that way, Architectura can be a kinda cutthroat experience, as players shank each other’s real estate investments, hacking away at the value of the cards you’ve so strategically positioned.  But on the other hand, smart card placement can vastly increase the value of your own cards, so it’s all all about clever placement and timing.

Each turn, you will play one card from your hand into the city grid.  There are as many rows (streets) as players, and up to 8 columns (blocks) per row.  Cards are placed from left to right, but can be added to any available rows.  Every card in Architectura has a starting value which might be a static number or it might be variable, such as being equal to the number column it’s in or being relative to a nearby card.  Upon being played, the new card’s starting value is compared to its neighbor on the left (if any).  Depending on the difference, a few things might happenr: 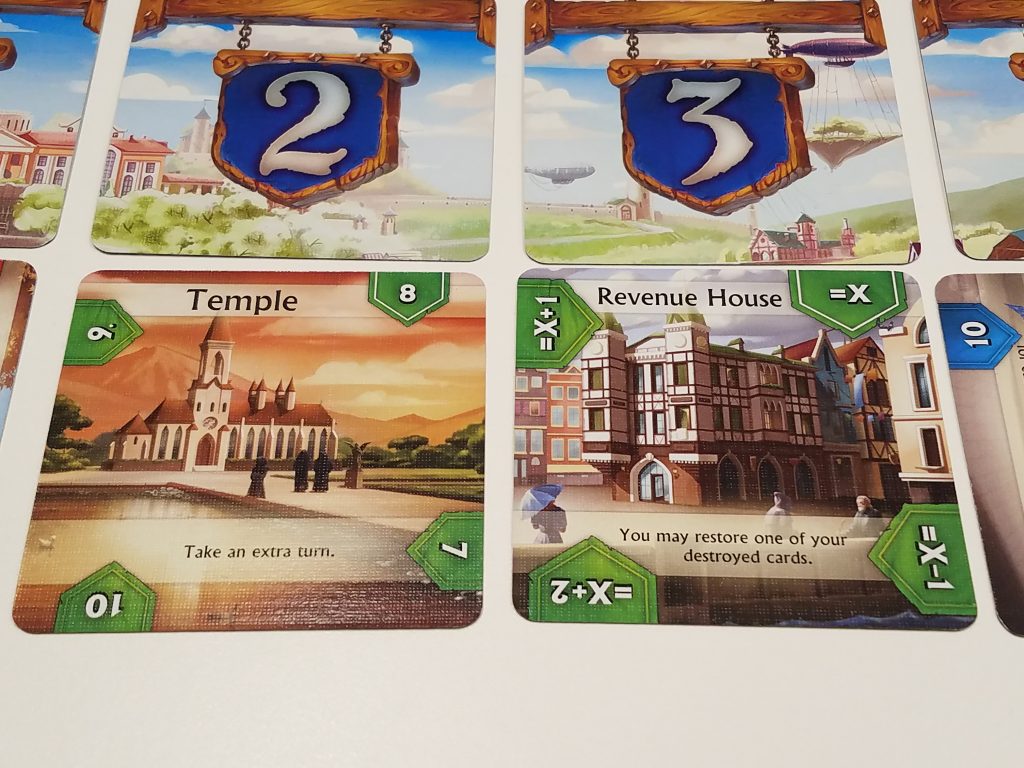 Andrew
So here’s where that whole timing bit plays in. You want to be sure that your cards aren’t going to get devalued by subsequent placements, so it’s a critical tactic to time your placements carefully. Of course, you’ll also want to take advantage of your opponent’s high-value cards to boost your own whenever you can. 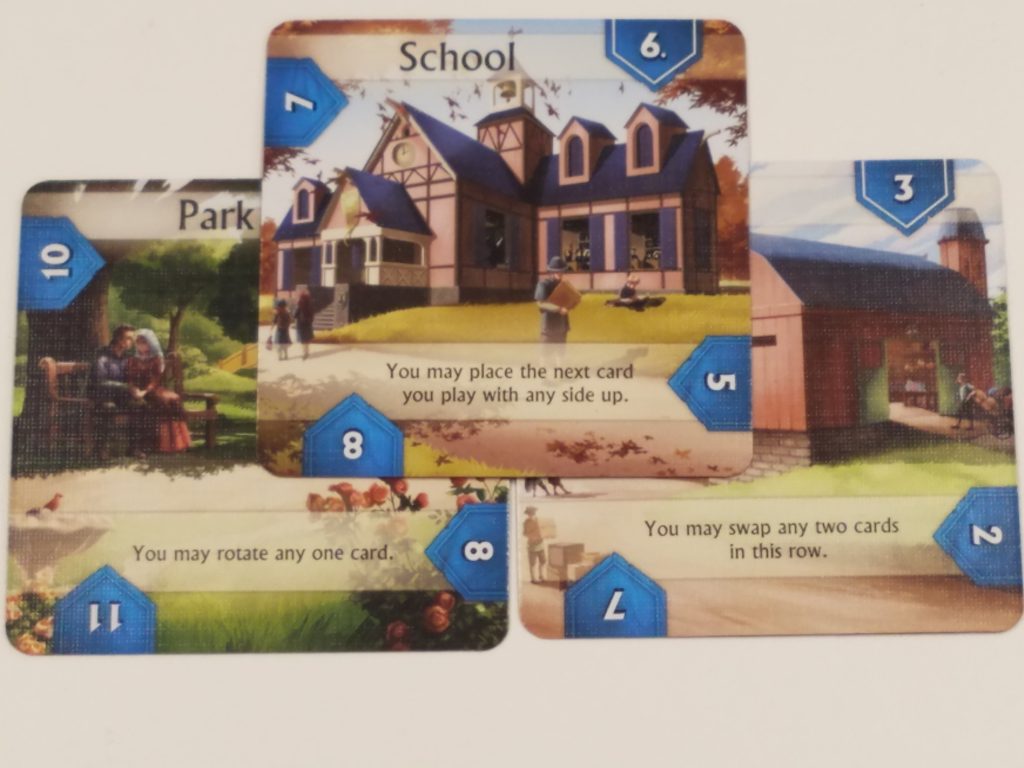 However, once values are compared and possibly adjusted, any special effect text on the new card takes place.  These effects vary pretty widely, from letting you rotate other cards to destroying cards outright to letting you make additional plays.  These special effects can powerfully manipulate the tableau in really unexpected ways, adding a layer of strategy to Architectura beyond ‘play low cards next to high cards and high cards next to low cards’.

Jess
The special effects are where Architectura really shines! Sometimes a card’s value isn’t its, you know, ‘value’, but rather how much it lets you manipulate the tableau!

Andrew
I have to say, I really, really liked Architectura. I know it isn’t your typical city building experience – you aren’t ‘making’ something, per say, and there is a lot more negative interaction than most, but I absolutely love the puzzle of how to best play your cards on any given turn. 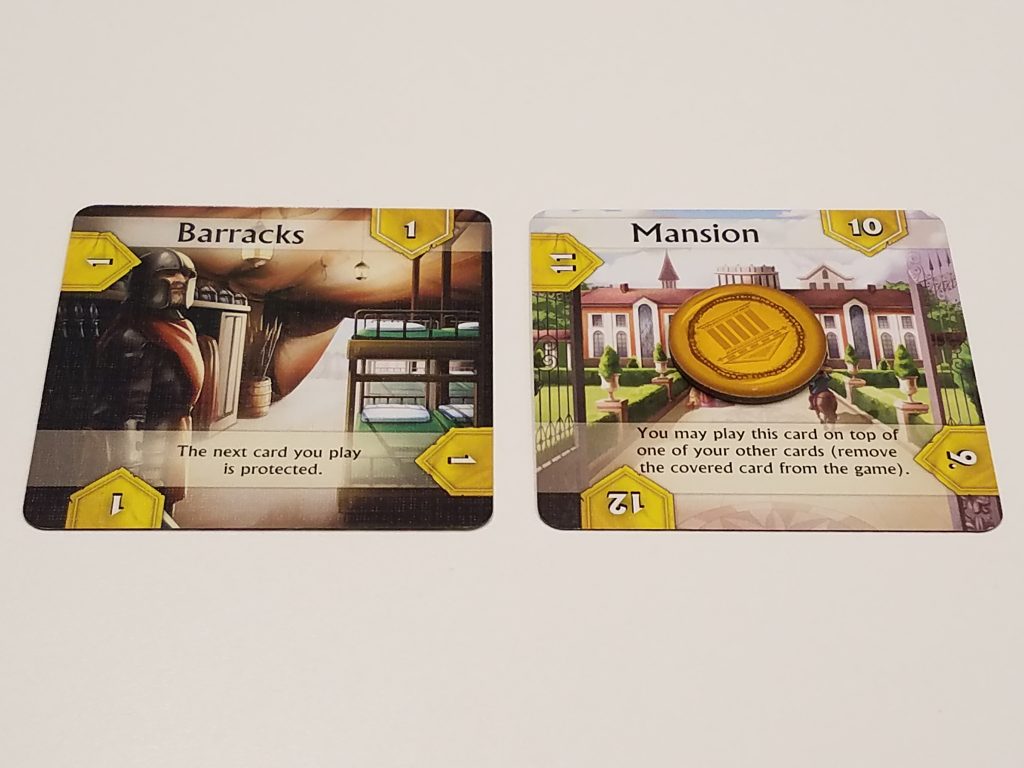 Jess
I actually agree, even though I don’t usually like games where you can mess with someone’s score. I said Architectura didn’t really give me the feel of a building game, and you hit the nail on the head with why – it’s not *my* city getting built. But the puzzle is great and the take-that doesn’t hurt that bad, since Architectura is interactive but doesn’t feel combative.

Adding some longevity to Architectura are the advanced cards, which pepper each player’s starting deck with a smattering of unique cards.  To play with the advanced rules, players agree on how many advanced buildings to add, and then swap out some of the base cards with their unique counterparts.  This makes every color play differently and causes some divergence in strategy, something that the game greatly benefits from.

Overall, we were really impressed with Architectura.  While things do get a bit chaotic at 4, it’s complexity and play time make it a fantastic 2 player ‘lunchtime’ game, and the only thing that stops us from considering it a fantastically portable title is the physical space the cards take up.  But anywhere you’ve got the table real estate, you won’t regret spending it on Architectura!