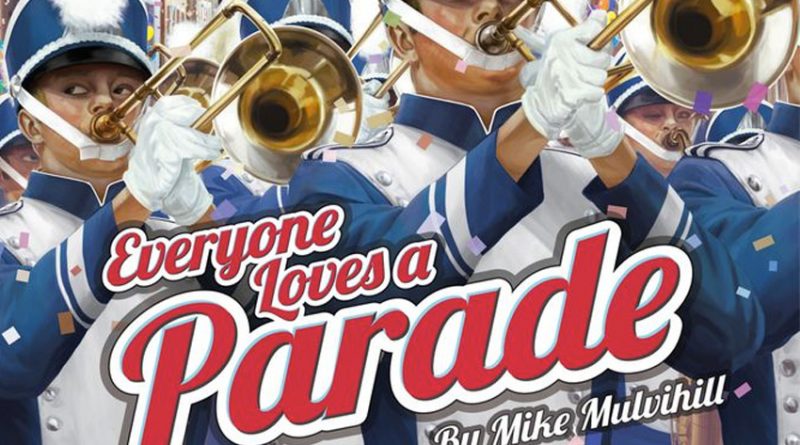 I mean, but do they?

So, I’ll tell you what Everyone Loves a Parade has going for it right off the bat – the theme is just plain neat.  I love the idea of competitive parade float construction, where teams of, uh, floaters square off in a battle to see who will make the most popular float and claim the title of Grand Marshall!

Jess
Did you really just call the players ‘floaters’?

Andrew
Look, I am unwise to the mysterious ways of mobile pageantry, ok? 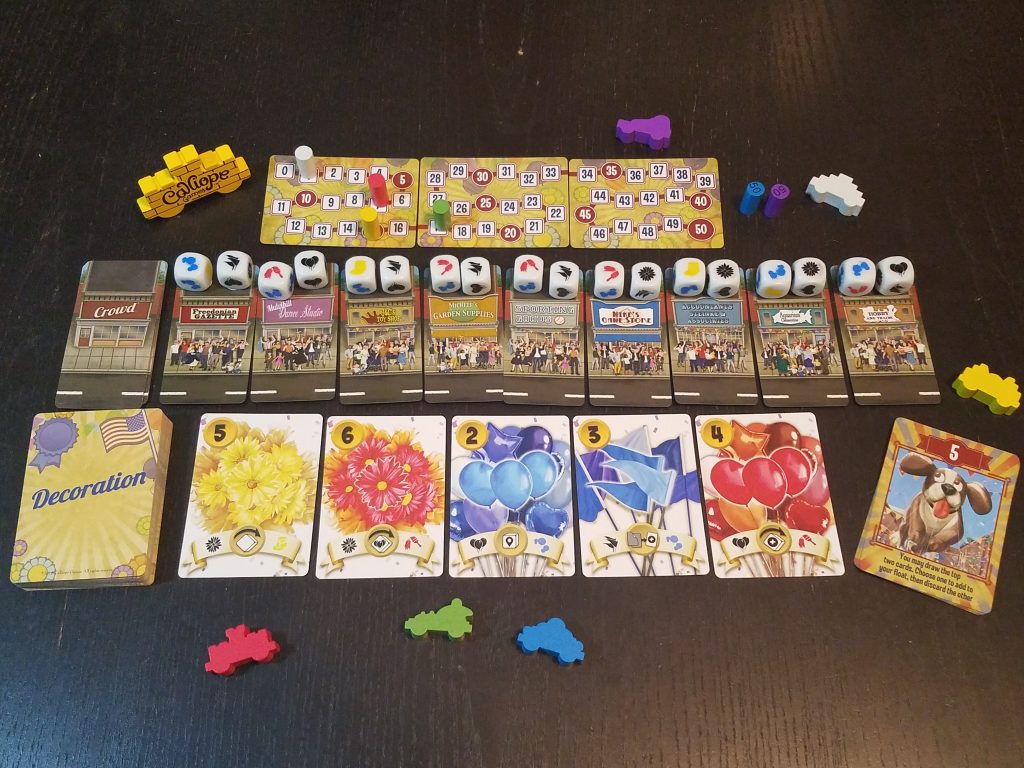 In Everyone Loves a Parade, you and your fellow…we’ll call you float designers will compete to make the most popular floats for the titular parade.  Over the course of 3 rounds, you will draft cards into your float, each of which appeals to a different crowd demographic, who express their favorite colors and float features via dice which sit along the parade route.  The decoration cards you add to your float will not only provide opportunities to score popularity points with the crowd, but will also give you one-time special powers which you can evoke in order to manipulate either the crowds or your own float in order to get the best chance at scoring the most points.  At the end of the drafting round, players will score their floats against one crowd card apiece, and will earn points based on how many decorations they have that get the crowd excited (which is to say, are present on the crowd dice).

Jess
Now I know what you’re thinking – balloons and flags and bright colors; Everyone Loves a Parade must be a fluffy, friendly game? No way man! Parades are apparently vicious!

That’s because the majority of card actions are really, really good at messing with your opponents.  Let’s say I’ve got some decorations designed to appeal to people who like balloons and yellow (and I would have drafted those based on the tone of the crowd at the beginning of the round).  Well, if my fellow players see that I’m likely to score big for my float, then it’s definitely in their interest to use their card actions to reroll or otherwise alter the dice on the crowd away from those colors and features.  If done correctly, you can leave a player with a float that won’t appeal to anyone, while you hopefully truck away with all the points.

Andrew
Of course, you can also focus on trying to turn the crowd in favor of your own float features, but so long as you and your opponents don’t have the exact same scoring opportunities, then you can neatly accomplish both goals of securing your own points and screwing your opponents.

Adding a little wrench in the gears are the Order cards, which are dealt randomly to players at the beginning of each round.  These cards determine what order you will choose a crowd card at the end of the drafting phase (remember that players only score one crowd card per round), and also give unique abilities that players can use just before selecting a crowd card.  Order abilities are often powerful, letting you either add or reroll dice or even add additional decorations to your float just before scoring.  These powers can sometimes swing a turn wildly in a player’s favor…or, just as likely, against another. 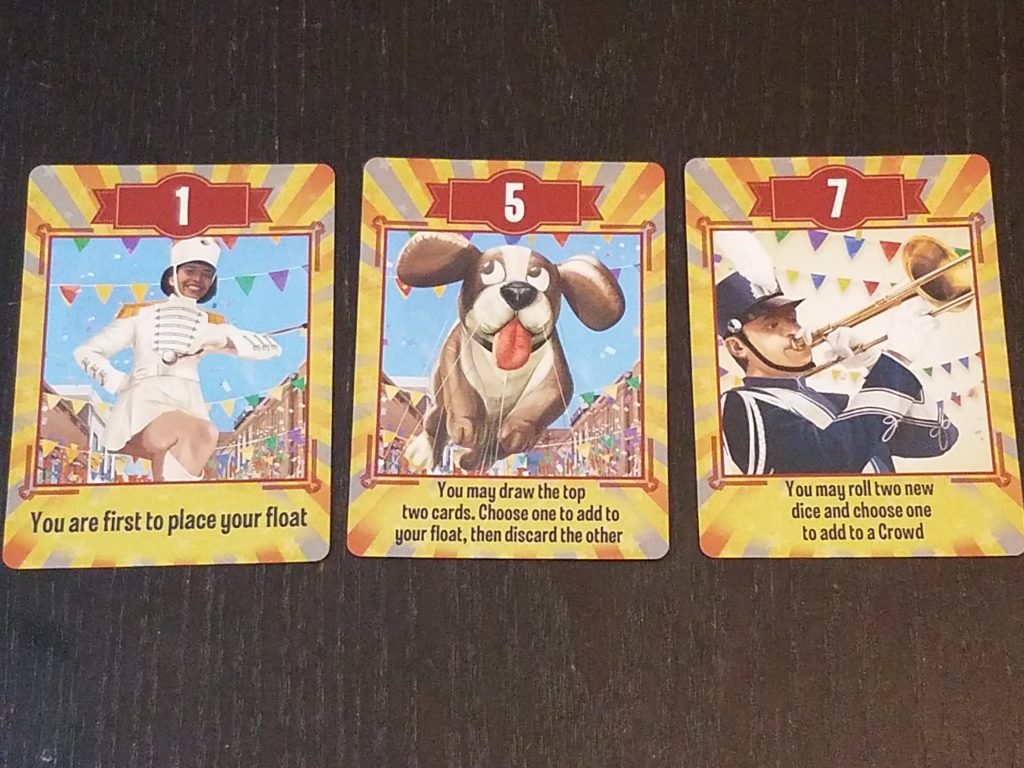 After three rounds of float construction and crowd-amazement, players will total up their scores and the player with the highest is the Grand Marshall!

Andrew
And I guess the score track is as good a place to start my criticism of Everyone Loves a Parade as anywhere.

Ok, so by all rights, Everyone Loves a Parade should be a simple, fun, occasionally vicious little filler of a game.  And it is those things, mostly.  But I have to say, this title needed a little more love.  The material and component design simply aren’t the best.  The score track is…ugh, I mean just look at this thing.  It’s like it was designed by someone who hates knowing what their score is.

But what really got me was how kinda meh the gameplay was.  I totally realize that Everyone Loves a Parade is meant to be a light, easy-to-engage game, but the randomness of the dice, paired with the take-that nature of the actions, meant it was really hard to actually have much of a strategy, and it was frequently the case that you’d draft yourself up the best float you could manage, only to have another player simply move or reroll the crowd dice you were counting on scoring.

Jess
Or just take the float you wanted, because their order card let them do that. Nothing more frustrating than getting snaked away from the crowd you were all set to impress.

Andrew
And, to be honest, there wasn’t really much sense of accomplishment when you did manage to score big. Everyone Loves a Parade just isn’t really about that, I guess.

And actually, that leads us to our final criticism of Everyone Loves a Parade – some actions just seem to work better.  There are, among the rerolls and dice manipulations and card switches, some decoration cards that let you add additional decorations to your float.  In virtually every case that they came up, those cards decided major swings in points because, hey, it’s the shotgun method of scoring – with more decorations, it matters less what crowd you end up trying to impress, because if you have a little something for everyone, then hey, you’re scoring no matter what.  If someone has 3 decorations and someone else has 5, it is very likely that the second person is going to win the round, and there isn’t much you can do about it.

Now, all the above just means that Everyone Loves a Parade simply wasn’t for us.  Which is a shame, because as we said in the beginning, the theme is actually pretty darn cool and we do like light, fast, slightly chaotic games.  That said, we’re 100% sure we know who will likely enjoy Everyone Loves a Parade – this has ‘family game night’ written all over it.

Andrew
I mean, look, if your kids are already beating you in Power Grid or whatever, that’s awesome. But you could stand to do a whole lot worse than investing a half hour in some fun take-that gameplay with a really neat theme wrapped around it.

Everything that didn’t land for us about Everyone Loves a Parade – the components, the wonky art, the chaos – will either not matter or be a great feature for the right gaming group, and we definitely imagine that a family will be able to have a good time messing with each other’s crowds and building the best floats they can manage.  Everyone Loves a Parade is that sort of good time, and will be perfect for some.  Just, you know, not us.

Jess
Ah well, they can’t all be winners, I guess. Like these floats we keep churning out that the crowd is downright ambivalent about. Maybe we’re just not cut out for the whole ‘float design’ thing. 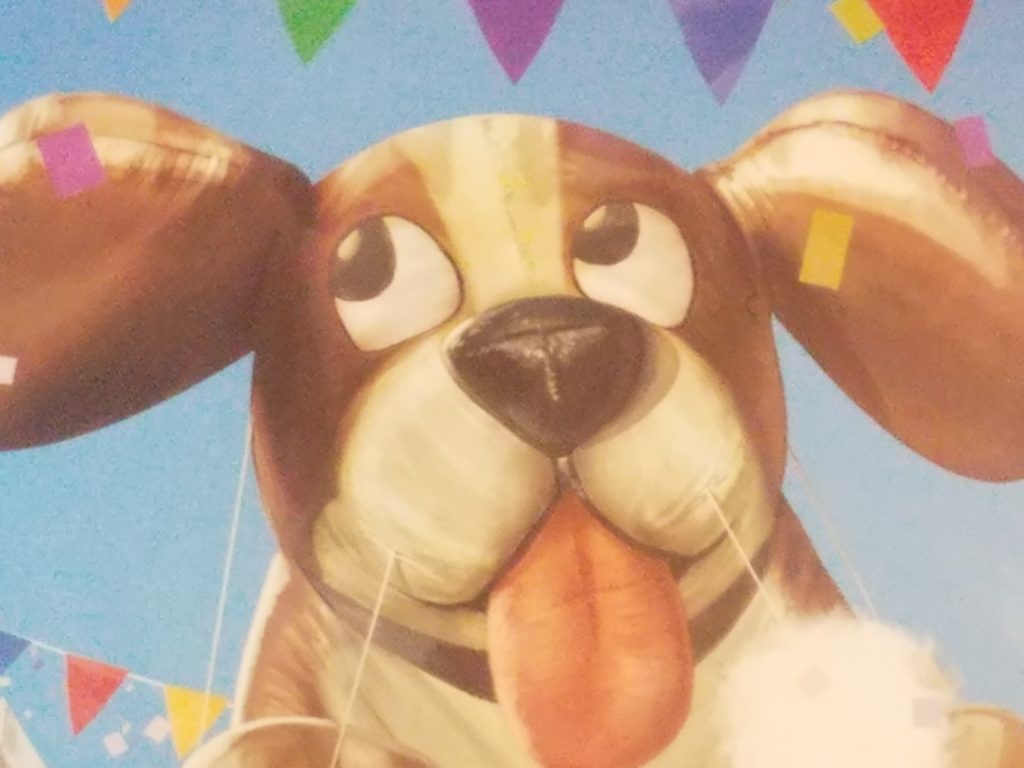