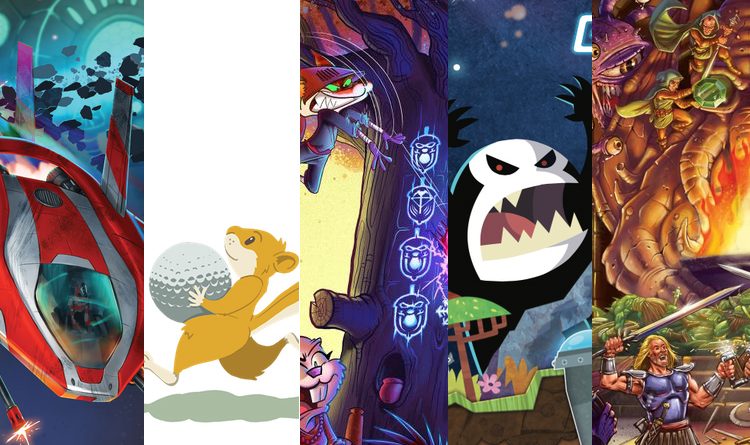 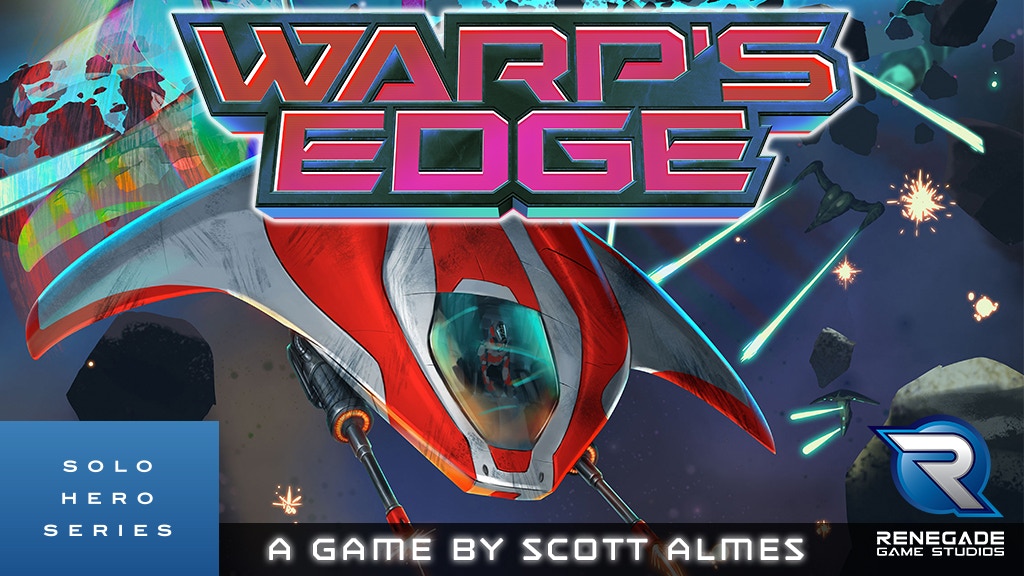 Warp’s Edge is a solo game about a rookie pilot named Taylor Minde. You’ve separated from your fleet and must find your way through the warp gates to rejoin your fleet and help in the battle against the enemy’s mothership. The game is part of the solo hero series where each game is comes with a story book. In Warp’s Edge , you’ll follow Minde’s story to the edge of the galaxy and back; making choices and fighting enemies. You’ll have different set-ups with a variety of ships, pilots with special abilities, and cargo holds of various sizes. Your cargo hold will carry a pool of tokens that act as your ships shields and when those are depleted you will begin to lose points from your ships hull (its basically your hit points). If you ever lose all your hull points, you lose the game. 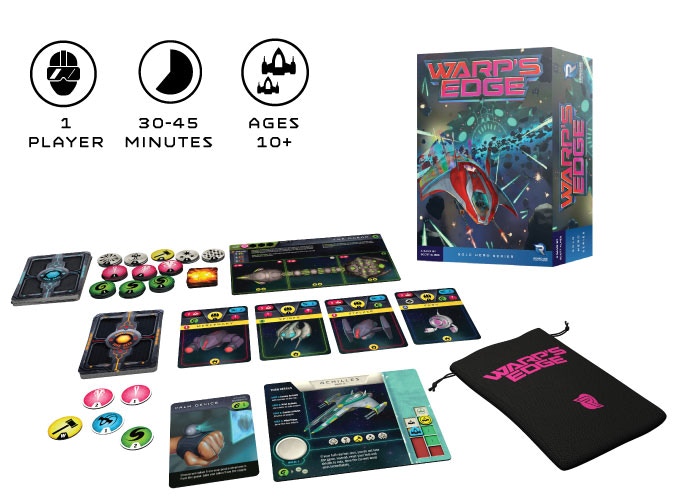 The game has a fun, comic book-esque look to it and with so many different set-ups, it looks like Warp’s Edge will have a lot of variety and challenge levels. You can check out Warp’s Edge here on Kickstarter. 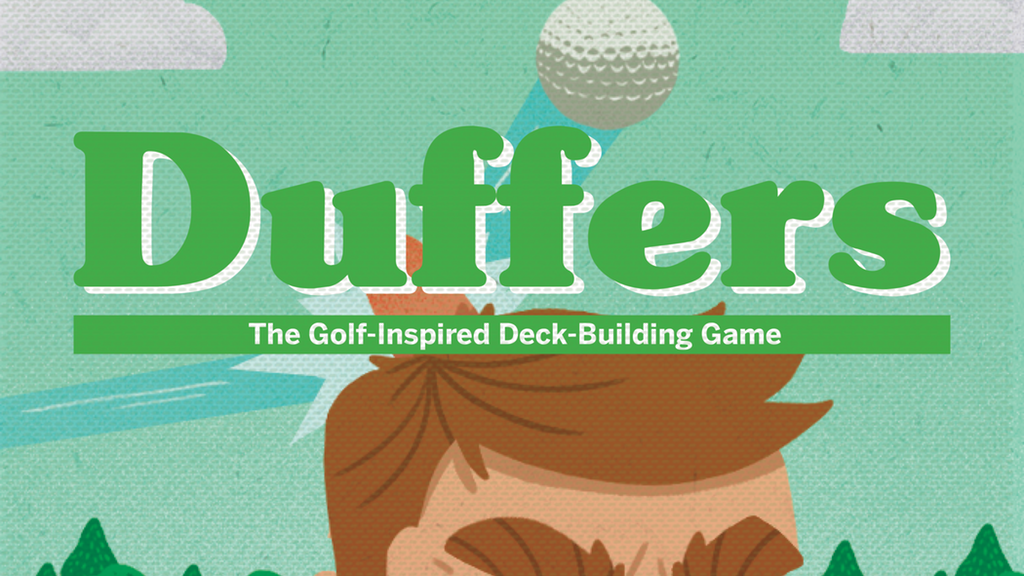 A Duffer is a mediocre golfer and in Duane Wheatcroft’s Duffers, everyone is looking to surpass their dufferness and become pretty ok golfers. it’s a drafting game where players will buy equipment and assitants from the pro shop in order to get the yardage they need to complete 9 holes. At the beginning of the game, you will choose the holes that will make up the course and craft your hand to hopefully provide you with the items you need to succeed. Your item cards all have various yards listed on them and you must add any played cards together when attempting a hole. If you overshoot a hole by more than 50 yards, you have to try again. The first player to complete 9 holes triggers the end of the game. 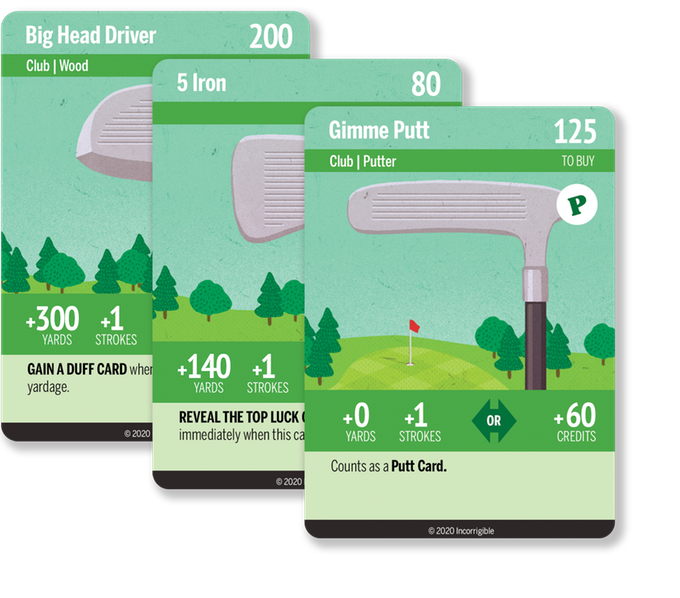 Duffers looks like a light-hearted take on golfing that sounds a lot more fun than the actual sport itself (don’t hate me. I was just traumatized by years of being forced to watch golf at my grandma’s house). Swing by the Duffers‘ Kickstarter page here for more info. 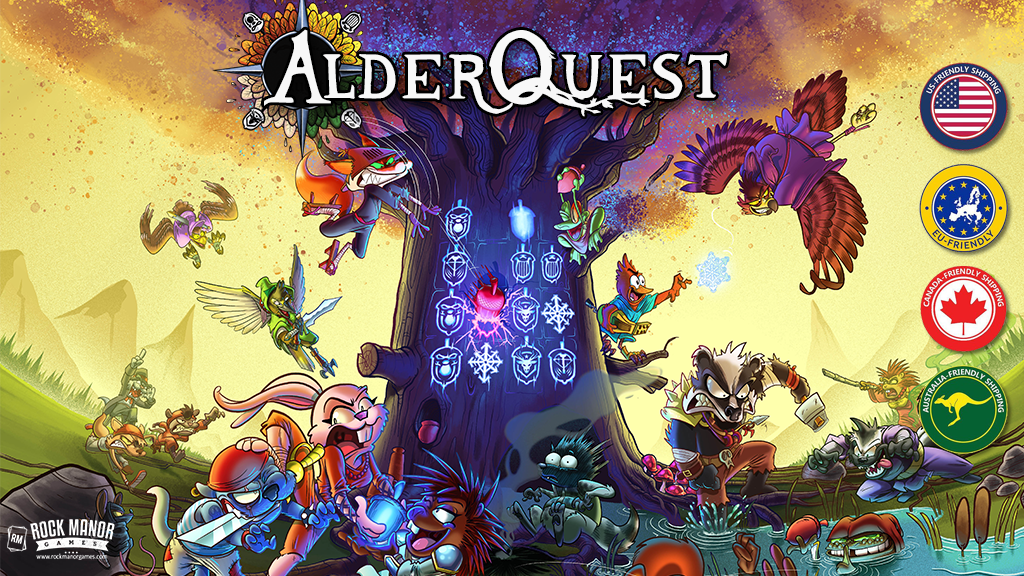 In AlderQuest, it’s the four-seasons tournament and the High councils of Aleron are demanding acorns. All the animal guilds have come to compete against each other, gathering acorns, to be named the champions. As an area-control/set collection game, AlderQuest has very similar mechanics to a match-3 game. You’ll be moving tiles to makes sets of three to collect resources. As tiles are removed from the board, the remaining tiles will slide down and could potentially create additional matches. 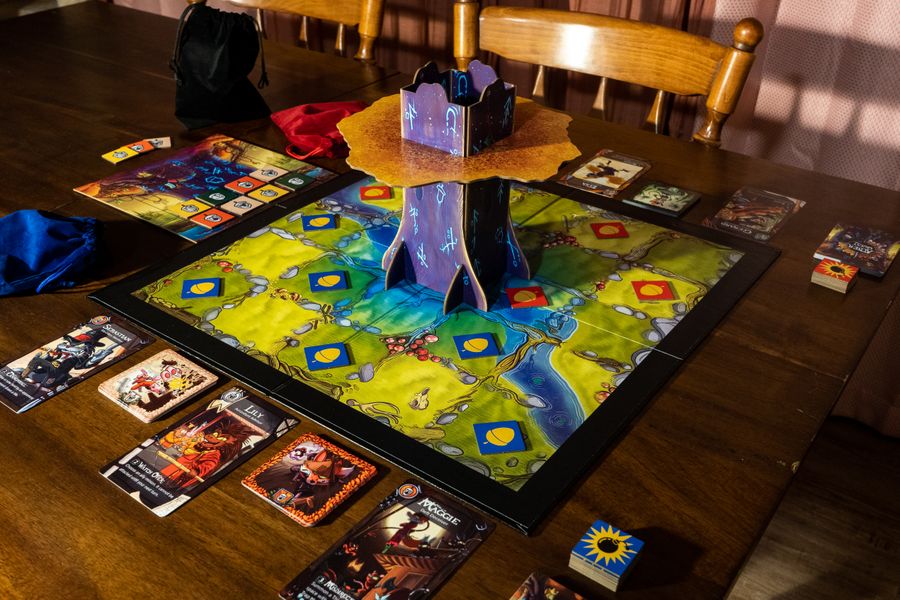 During the game you’ll also be controlling heroes which will span minions that can run around the battle field collecting acorns and delivering them to the tree in the middle of the game. If you enjoy match 3 apps then definitely check out AlderQuest on Kickstarter here.

Lift Off! Get me Off This Planet! – Expanded Deluxe Edition 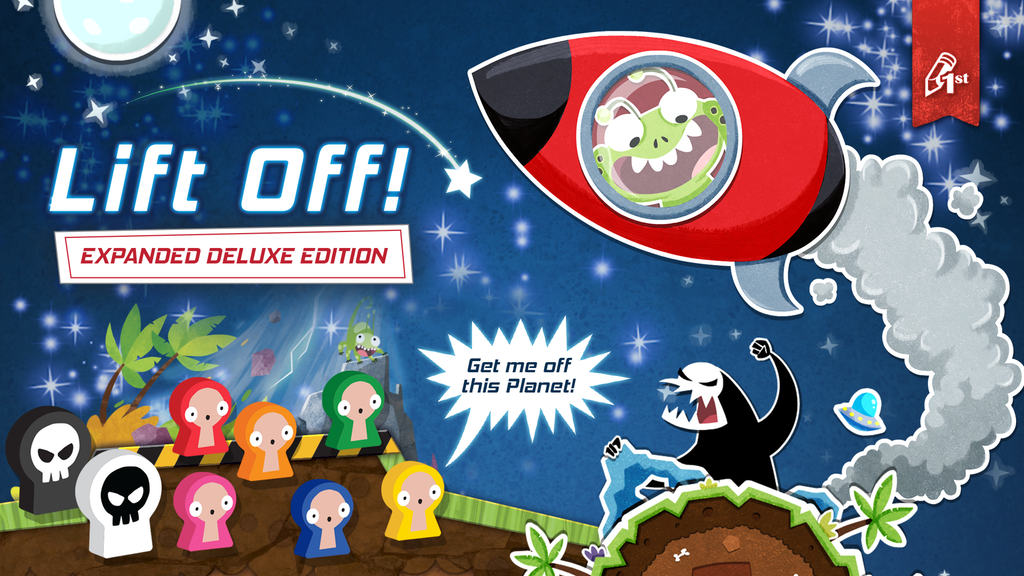 In Lift Off! Get Me Off This Planet! the world is about to explode and you must help your aliens escape before it all goes boom. This family-weight, worker-placement game is semi-cooperative as the spaceships you need to escape will require multiple players to build. The ships can carry a varying number of aliens off the planet, so players will need to use special actions to secure their seats. 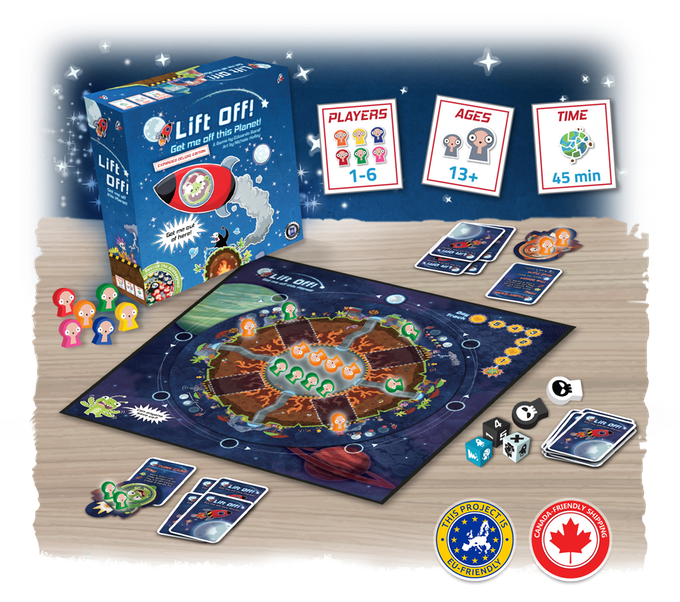 Lift Off! Get Me Off This Planet! was previously published in 2015, but now Pencil First Games is Kickstarting a deluxe edition that will come with double-sided boards, solo-player rules, a sixth player slot, upgraded components, and more. If you already own a copy of the game you can instead back it for an upgrade kit and get everything you need to update your current copy. Learn more about Lift Off! Get Me Off This Planet! on Kickstarter here. 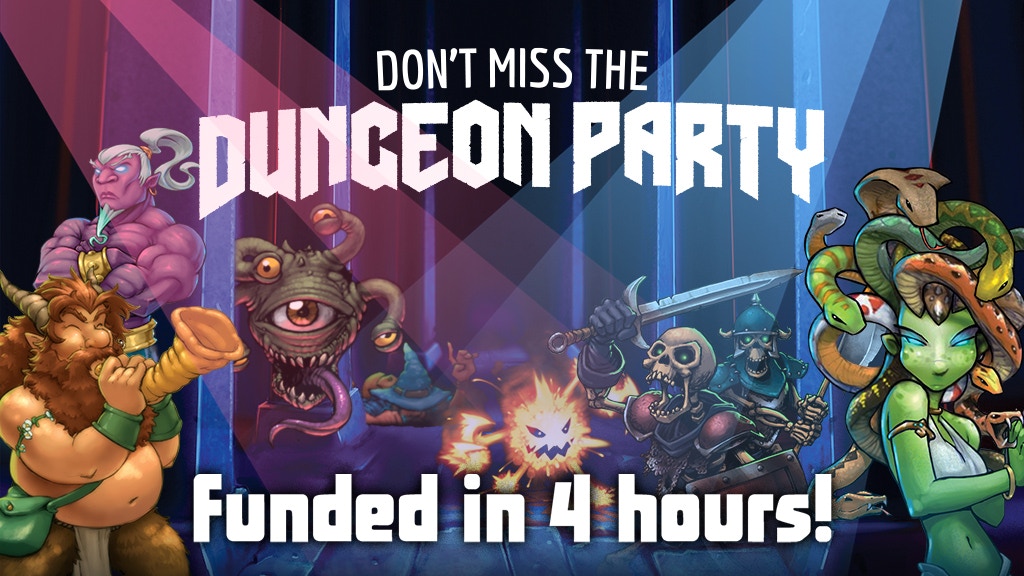 Dungeon Party is a dexterity-party game where players will explore a dungeon composed of bar coasters. To take actions players will need to bounce a coin; hoping to land on spaces that will allow them to explore rooms, defeat monsters, and disarm traps. The group will adventure together, but the player who collects the most loot during the game wins. 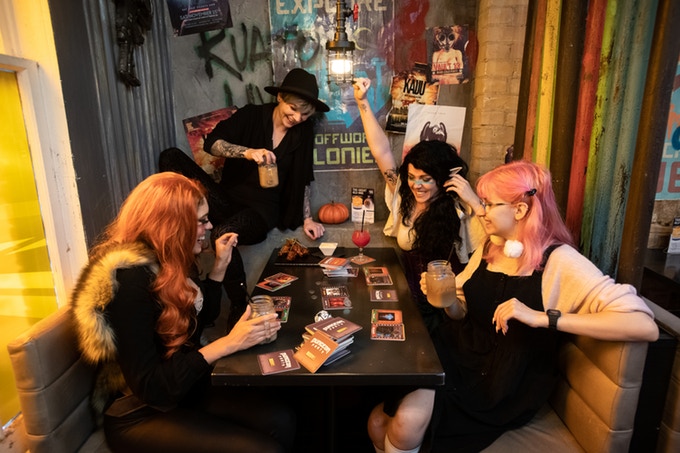 I have on at least 1 occasion had a player mistake a component for a beer coaster, so it is kinda fun to see a game specifically designed to be just that. I’m still not sure I’d let anyone actually use the pieces as coasters though. Dungeon Party looks like a light-hearted, goofy party game that can be enjoyed by drinkers and non-drinkers alike. Check it out here on Kickstarter.