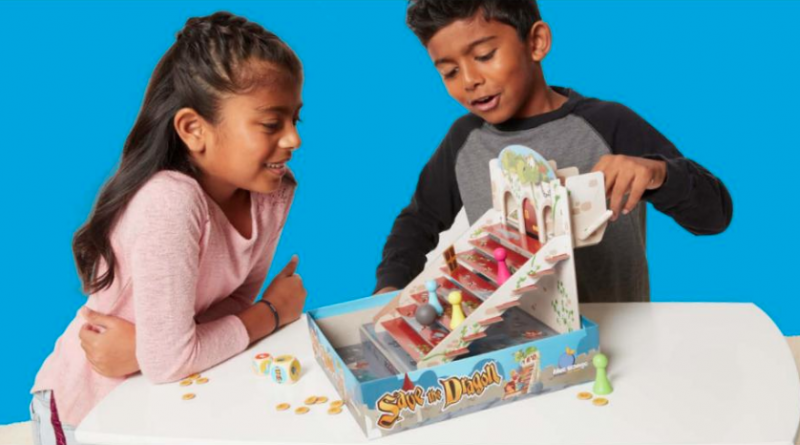 Blue Orange Games has been making award-winning, delightfully fun games for twenty years now and to commemorate the year, they will have 20 new games on the market!

“It​ has been twenty years now since the launch of our very first game, ​Gobblet​,​” says Martin Marechal, CEO of Blue Orange Games. “So​ we are celebrating twenty years by releasing twenty new games in the year 2020. As we always say, ‘time flies when you’re having fun,’ and it feels especially true when you’re in the business of making games for children and families, and partnering with wonderful toy stores! We are so excited for the year to come! Our team has worked hard to develop the very best games possible, while staying true to our commitment to quality games that ignite family fun and develop fundamental children’s skills.​”

We’re going to have our work cut out for us this year at Toy fair checking out the booth as Blue Orange Games will be showcasing 16 of the new titles. The games will be available in stores and online early spring. They will release four more unannounced games at this year’s Gen Con including a new game from Bruno Cathala in the Kingdomino collection, and a new concept from Phil Walker-Harding. You can see Blue Orange’s announced line-up below.

Fish Club ​ 2​ players | 5 & Up
Fish Club​ is a classic two player abstract strategy game with a modern twist. Two families of fish go head to head for the best spot in the new aquarium!  On your turn, choose one of your fish and physically drop it in the tank. Try your best to make it land next to the other fish in your color. The first player to connect 5 of their fish together wins the game.

Snip Snap ​ 2-6​ players | 7 & Up
Snip Snap​ is the fast-action dice-matching game that will get your head spinning! Roll the dice and race to find a match between the dice you rolled and the dice your opponents rolled. See two sharks? Call out “SHARK SNAP!” Then snatch them fast to score!

Starlink 3-6​ players | 8 & Up
Starlink ​is a drawing party game that takes its inspiration from the constellations in the night sky. On your turn, you must try to represent a secret word by drawing straight lines between the stars on the board, and then hope that the other players can guess what you are illustrating.

Slam Cup ​ 2-4​ players | 6 & Up
Slam Cup​ is an intensely fast speed matching game. Match the color on the inside of your cup to the color on the outside of the top cup on the stack. Then slam your cup on top as fast as you can, before someone beats you to it! The first player to stack all their cups is the winner!

Droll ​ 2-6​ players | 7 & Up
Time to break out the dice and get this party rolling! ​Droll​ is the hilarious dice-drawing party game where players race to draw images related to a secret word on each side of their giant dice. When everyone is done drawing, everyone rolls their dice and tries to guess the other players’ secret words!

Cupcake Academy ​ 2-4​ players | 8 & Up
Cupcake Academy​ is a cooperative game of logic and speed. Work together with your fellow pastry chefs to organize your kitchen based on your instructor’s assignments. Each assignment wants your cupcake cups to be arranged in a specific layout in the kitchen, so you must quickly move the cups to empty plates or on top of smaller cups, one at a time, before time runs out!

Cross Clues ​ 2-6​ players | 7 & Up
Cross Clues​ is a cooperative party game about making connections between clues. Work together to fill in the grid of code words by giving single word clues that represent the crossing of two different words in the grid. Consider your clues carefully and think as a team to fill in as much of the grid as possible! Thousands of different combinations guarantee endless fun!

Talent Show ​ 2-10​ players | 7 & Up
Talent Show​ is a silly party game with a variety of different challenges. Play against the game or each other! Roll the dice and complete the challenge for the round. Challenges include: drawing, singing, miming and combining words together. You will score points if the other players can guess what you are trying to represent. Do you have what it takes to win the talent show?

Rip Off ​ 2-6​ players | 8 & Up
You’ve got just one bill to cover all your expenses! ​Rip Off​ is an innovative game of visual perception unlike anything you’ve played before. Each turn you will physically rip off a piece off your fake bill to literally cover the objects you want to buy. Make sure the pieces you rip off are just the right size! The more you rip off now, the less you will have to cover future expenses. The player with the biggest bill remaining at the end is the winner!

Rip Off​ is the newest game from ​Urtis Šulinskas, the inventor of ​Planet​ and ​Emojito (nominated for the Kinderspiel in 2018).

Piece of Pie 2-4​ players | 8 & Up
It’s time to piece together the perfect pie! ​Piece of Pie​ is a deliciously themed drafting game. Each turn, you take one of the available pieces and add it to your personal pie. Follow the recipe cards to earn the most points possible. Pick the pieces that match the featured recipes on display… and don’t forget the decorations!

Rose Ceremony 3-6​ players | 8 & Up
Love is in the air! In ​Rose Ceremony​, you get to offer a rose to the player of your choice… but they can refuse if they suspect it comes with too many thorns. If a player doesn’t accept your rose, then you will have to add it to your own bouquet! Try to create the most beautiful bouquet of roses possible, while avoiding all those pesky thorns.

Rose Ceremony​ is the newest game from Ken Gruhl, the inventor of ​Happy Salmon​ and Fast Flip​.

Animix 2-6​ players | 8 & Up
Score the most points with the right mix of animals!​ Animix​ is a set collection game with beautiful, modern illustrations. Animals you collect score points based on the animals left in the center of the table at the end of play. Each animal scores points differently, so plan ahead to collect the perfect mix to win the game!

Pig Puzzle 1​ player | 5 & Up
A storm is brewing! Help the pigs get home safely while keeping an eye out for the hungry wolf and the flooded lake! ​Pig Puzzle is a single player logic puzzle played over a series of challenges of increasing difficulty. Each challenge, you will gather the pieces listed and then place them on the map so that you make a continuous path from the pigs to the safety of their homes!

Bye Bye Mr. Fox! 1-4​ players | 5 & Up
Bye Bye Mr. Fox​ is an adorable cooperative game that teaches young players about teamwork and strategy. Work together to help the hens keep their eggs safe from the cunning Mr. Fox! Spin the spinner and see what will move this turn: an egg, a chicken, or Mr. Fox? Move three eggs into each hen’s house to win!

Bye Bye Mr. Fox​ is the newest game from Wilfried and Marie Fort, the inventors of ​Fishing Day​ and ​Where’s Mr. Wolf?.

Save the Dragon 2-4​ players | 5 & Up
Save the Dragon​ is a roll & move game with an engaging table presence. Take turns rolling the dice and climbing the stairs to the dragon’s tower… but watch out for falling boulders! The guards will try to knock you off and send you back to the start! The first player to reach the top is the winner.

Save The Dragon​ is the newest game from Frederic Moyerson, the inventor of ​Saboteur and ​Vroom Vroom.

Maracas 2-8​ Players | 6 & Up
Shake those maracas… with a twist! Maracas is​ a silly guessing game that is played with a single maraca. One player fills the maraca up with beads and the other players try to guess how many are inside by shaking it and listening closely.

Maracas ​is the newest game from Bruno Faidutti, the inventor of ​Citadels ​and ​Attila.