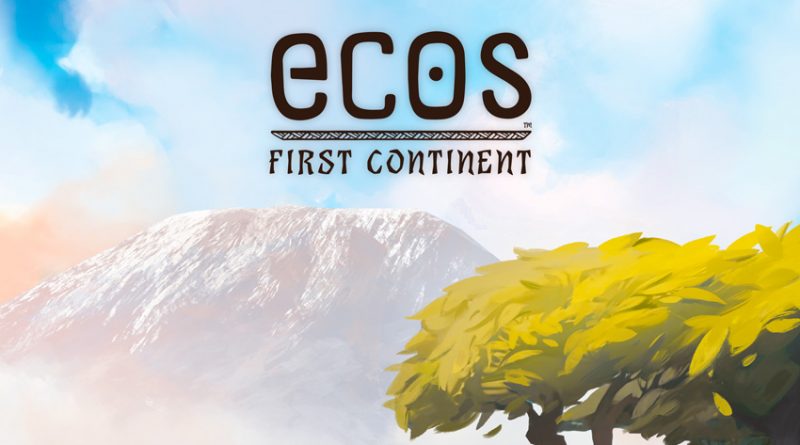 
John D. Clair’s tile-laying/set-collection game, Ecos: First Continent, has bingo-style gameplay reminiscent of Rise of Augustus, yet adds a layer of complexity that leaves me a little unsure of where I stand on it. I’ll explain, but first a quick overview.

Andrew
Heh, when you say a quick overview, you mean it!

Jess
Faster than someone can yell ECOS!

We received a copy of Ecos: First Continent for our consideration & possible review

In Ecos: First Continent, the primary way you’ll take actions and score points is by activating your cards.  Each player starts with a handful of them, and you can put more into play as the game goes on.  Every card in Ecos: First Continent is unique, and activating them triggers a variety of effects, including gaining points and affecting the shared landscape tableau that all players are building together.

To activate a card, you will need to cover each of the Energy Symbols along the left side of the card.  Each turn, one player (ominously called the Harbinger) will draw an energy tile from the, uh, energy bag, and call it out for the table.  Each player may then take one of their energy cubes and place it on a matching symbol on one of their active cards.  This process repeats until someone manages to cover all the symbols on one of their cards, at which point that person yells “ECO!” as loud as their fellow players will tolerate, at which point gameplay pauses while that player resolves whatever effects their card produces.

Once the Harbinger draws one of the Wild energy tiles, all the previously drawn tiles go back in the bag and the next player becomes the Harbinger, and you rinse & repeat until someone scores the game-ending 80th point.

Jess
So, Ecos: First Continent sounds like a pretty straightforward Bingo-ish game. But what we haven’t really talked about yet are the tiles, forests, mountains, and animals.  Also, you shouldn’t literally rinse your board games.  They almost never dry flat.

See, Ecos: First Continent isn’t just about the cards. In the middle of the table will be a continent made up of land and water tiles. The your completed cards will allow you to add or manipulate tiles as well as populate them with trees, mountains, and animals. When it comes to tiles and features, where they are placed will factor into how you (and your opponents) might score. You might gain points for the number of trees you have in a habitat (a group of adjacent tree, adjacent mountain, or adjacent Map tiles of the same type), or you might gain points for every animal of a certain species, etc.  By completing cards and being clever with how you manipulate the continent, you can set yourself up to earn piles of points!

So the idea is, fill in a card take the listed actions. You might think “Ok I finished this card. On to the next”, but no. Most cards can be used multiple times, emptying of cubes after every activation. Every time you fulfill a card you must turn it 90 degrees, counting down until the card expires. When you are only focused on a few cards at a time this is fine, but if you build up a large card pool, keeping track of all of your potential actions, the repercussions they will have when activated, and how many uses they have left can quickly become a daunting task.

Jess
And I guess that brings me to my big issue with Ecos: First Continent – it can go from quick to reeeeeal slow all at once.

To start with, like I just said, you start with a pile of available actions in front of you, and over the course of the game, you can (and probably should) add more.  Each card is completely unique, and in addition to letting you change the continent or score points, plenty of cards let you place more energy cubes.  And that means that lots of cards give you the opportunity to fill in spots on other cards, potentially activating them, and so on and so on.

Andrew
Which is honestly awesome! Triggering a combo of cards that lets you score points and change the terrain and then activate more actions and get even more done feels so damn clever when it comes together!

Jess
Yeah!…for the active player, anyway. But every time someone yells ECO, it means the game grinds to a halt while that player triggers their card, makes their choices, possibly triggers another…

Andrew
Totally. And with each activation, it’s possible that your own plans might get mucked up, like if you’re trying to score for certain animal adjacency and someone else moves those animals, well, you might just want to think twice about activating that card you’ve been working on for 5 pulls.

See, Ecos: First Continent isn’t a complicated game by any stretch. Wait for the energy you need, activate your cards when you can, score points faster than your opponents.  The randomness of the energy draws is a limiting factor on how strategic you can be with your timing, but there’s still plenty to think about, since all of your cards will do slightly different things.  And that’s sorta the problem – there are too many slightly different, but ultimately fussy things going on at once.  At higher player counts, the state of the continent is constantly changing, and planning gets really tough, whereas lower counts mean you’ve got much less chance of being able to take advantage of the moves some other player is making, so your point acquisition is likely to be much slower.

Jess
And I could forgive all that, except for the slowdowns around card activations. I’m not sure that’s Ecos: First Continent’s fault, but when someone is ECOing, all the game’s momentum smashes to zero.

Andrew
For sure. And I think it stays around just a little past its welcome. 80 points can be a lot, and I think it’s telling that the rules basically say ‘if you’d rather, just play until 60’.

So that’s where we are.  On the one hand, Ecos: First Continent has some real sticking points for me.  It can be slow and grindy and a little difficult to continuously engage (which is really ironic, given that one of the game’s major selling points is how quick and simultaneous gameplay is when the Harbinger is drawing tiles).  On the other hand, the core concept is awesome and the production is p.h.e.n.o.m.e.n.a.l.  Seriously – the tiles are great, the tokens have built-in organizers, the tiles are big and colorful, and the forest and mountains stand out really nicely on the table!  It can play a huge number of people, which is theoretically awesome, but then it bogs down really badly at higher player counts (I think we enjoyed Ecos: First Continent most at 2 players).  Even Ecos: First Continent’s excellent component design suffers from the same tiny missteps of its mechanics – tiles can get overfull of tokens easily, animal terrain icons are relatively tiny, and (nitpicking here) the names of the animals can be a little hard to read on the organizers.  Like I said, it’s a nitpick.

So, at the end of the day, do I recommend Ecos: First Continent?  Well, yes, mostly, as long as you know what you’re getting going in.  Because I have to say, even though I’m a little lukewarm on Ecos: First Continent, ‘Bingo with quests’ is a great concept for a game mechanic, and it worked super well in Rise of Augustus, a game we still consider to be an excellent game-night game to this day despite having been printed 7 years ago (which is like 30 in board game years).  So for those of you who have experience with that game but felt like there just weren’t meaty-enough choices, you should definitely check out Ecos: First Continent, because it’ll probably be exactly what you’re looking for.