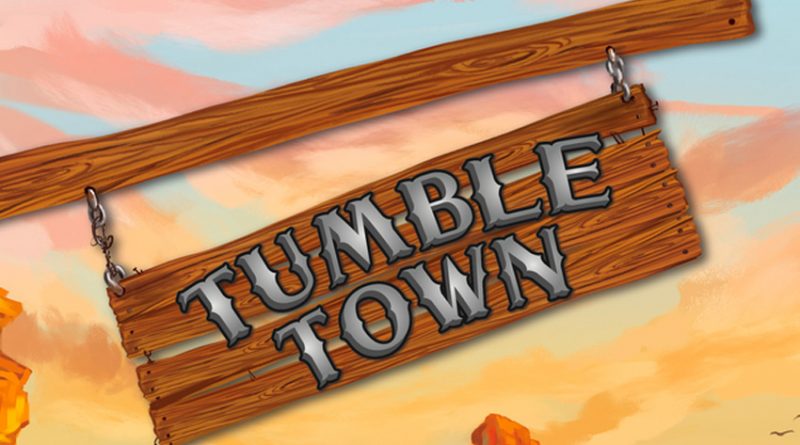 Jess
Welcome to Tumble Town, partner! Folks around these parts are looking to elect a new mayor, and the person who puts together the most impressive plan for building up the town is sure to win!  So put your construction hat over your cowboy hat and let’s get to work!

In this set-collection/dice-rolling game, 1-4 players will be drafting building plans and rolling up materials in order to construct various establishments in town. Each player will also have their own Main Street where they can place their newly planned buildings; the placement of which can score them some nice bonus points.  But just planning on the biggest, flashiest buildings won’t be enough, since without an infrastructure of support buildings (to manipulate your dice), you’ll be left to the vagaries of chance.

Please note that we received a prototype for this preview, with the option of asking for a final copy of the game.  We weren’t otherwise compensated, and we’re sure everything will look more awesome when it’s finished!

In your quest to make the best town in the west, you’ll be using dice to act as material components and building plans to help guide your construction efforts.  The building plans come in 3 levels of difficulty to build. Each level will have 4 cards on display to choose from. You can take from any row you want, but starting off on the easier buildings will help build up your ability to manipulate the dice when it comes time to assemble those bigger buildings.

Andrew
Getting buildings early-on that help mitigate the randomness of your dice is key! Those fancy, valuable plans might call your name, but you’ll make life a lot easier by setting up some manipulation & resource-gathering options up front.

When you pull a card from one of the plan rows, you will get the building resources (dice) that match the back of the face-down deck for that row.  So the choice of which plan to pull isn’t just about what you want to build, but it’s also about getting the right resources.

Completing plans for a building requires that you have the correct materials with the right numbers available to you.  Once you do, you can add that building to your Main Street display and the building’s ability (if it has one) will now be available for your use on future turns.  Buildings without abilities might instead give you one-time resources or end-game scoring opportunities.  All buildings are also worth a number of points on their own, as well as having a ‘style’ which might be an additional source for points, such as the strange preference expressed by your horse:

Once the supply of resources runs critically low, all players will take an equal number of turns and then count up their final score.  The player who manages to impress the townsfolk most will be named the new mayor!

Jess
The thing I love about Tumble Town is how, despite all the dice on the table, it’s really a game about controlling the chaos. The mechanics are smooth enough to keep the game moving, but the really fun part is having to adapt to the vagaries of the dice as you keep your town growing. The whole ‘main street’ concept is a cool one, and I really enjoy how you’re both building an engine and a town at the same time, and how each new building potentially expands your future options.

Andrew
Absolutely. The engine-building is clean and simple, and I like the whole ‘tipping point’ question about when it’s best to focus on building up your engine vs. working towards straight-up points.
We enjoyed Tumble Town a lot; it’s not a complicated game, but there’s still plenty of strategy and as engine-builders go it spins up fairly quickly and is easy to play and engage.  We’re also suckers for a western theme and, while it’s completely pasted on, it still adds a nice touch (and will only get nicer as the art improves through the Kickstarter).  We definitely recommend heading on over to the Tumble Town Kickstarter page and giving it a look!