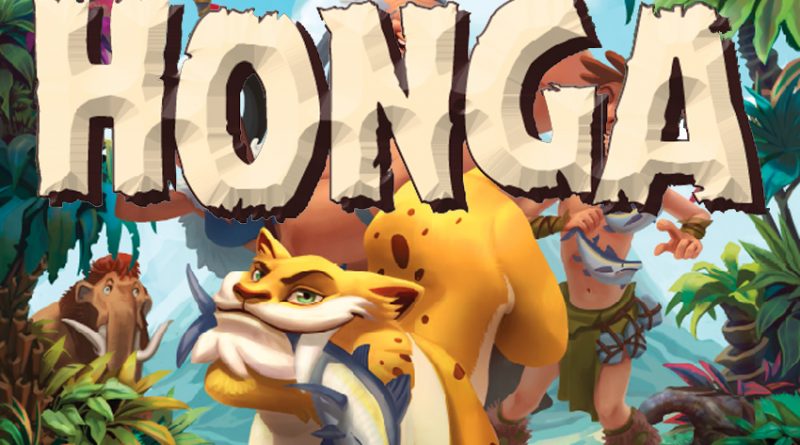 Honga, by designer Günter Burkhardt is a family-weight action selection/set collection game about a group of cavepeople looking to establish themselves as worthy of leading their tribe.  Publisher HABA is an absolute ace at publishing games geared toward younger players (in their iconic yellow boxes), but more and more they’ve brought ‘game night approved’ titles to the table – games that are just a little bit more complex and form the perfect bridge between younger or more casual players and more hobby-style gamers.  And while the saber-toothed tiger on the cover meant some of us absolutely had to play Honga…

…the great news is that the game really does deliver on the promise of an experience that is perfect for family or more casual players without ever feeling oversimplified or unengaging! 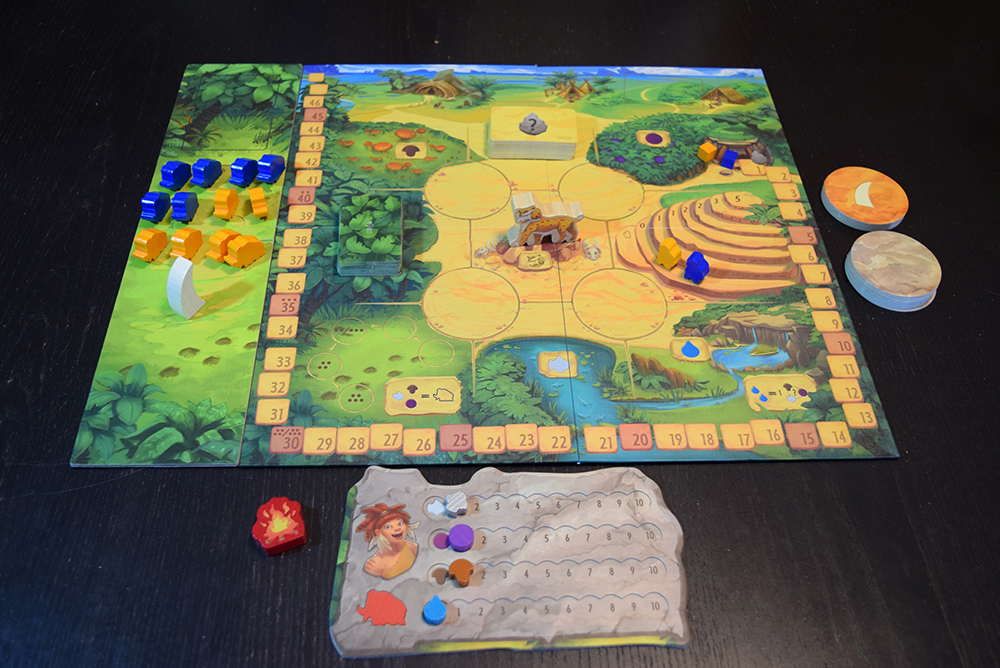 We were sent a copy of Honga for our consideration and possible review.  We weren’t otherwise compensated.

In Honga, each player is trying to prove their worth as a leader of their tribe, and in doing so will be overseeing a bunch of tasks.  There are forests to explore, supplies to gather, mammoths to manage, etc.  You know, all those classic prehistoric activities! There are several ways of scoring points in Honga, and each work slightly differently, like racing up the sacred mountain to be the first to worship nature gods, or by trading with foreign clans.  Each player has their own player board, where they will track the supplies they have in reserve.

Jess
You can also spend supplies to attract mammoths to your herd, which can give you the benefit of access to more actions per turn! 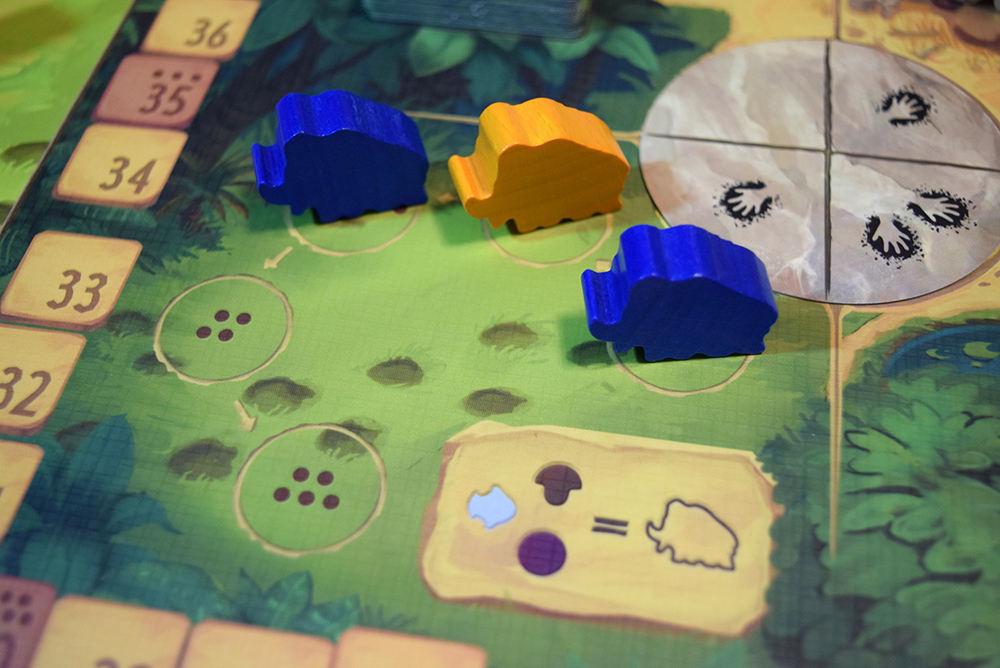 The action-selection mechanism in Honga is really unique – each turn you will place an action disk on one of four spaces.  Each action disk is divided into quarters and feature 4 (or 5) hands.  Depending on how you orient those hands, they will point to different activities around the board and will allow you to take the associated action that many times.  Clever action tile placement will mean being able to chain actions together and gather lots of resources you need!

Andrew
I have to say, the action tile mechanism is my favorite part of Honga. It’s so simple but at the same time it makes things just a little bit puzzly, since you can’t always do exactly what you want but have to make the best use you can of the disk you’ve got. 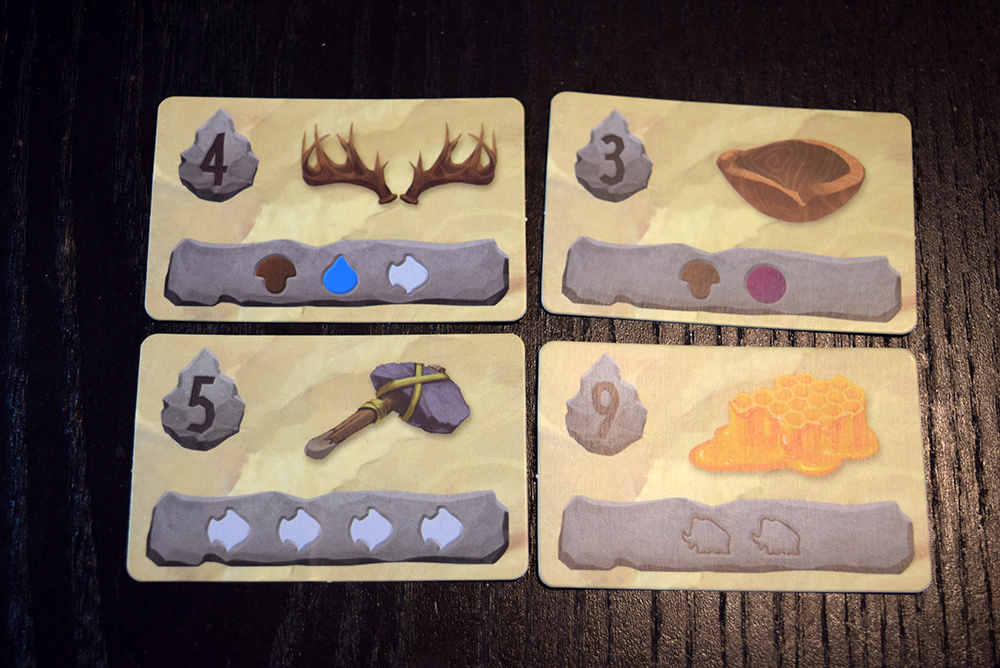 Jess
Yeah! And while you can place the disk in any orientation, you probably want to spend at least one hand’s worth of actions petting Honga! Or else.

‘Or else’ is right.  That smilodon in the middle of the board demands pets, and woe to the player who ignores the giant kitty.  If you orient your action disk so that at least one hand is pointing at Honga, then you’ll be fine – an application of chin scritches will keep the saber-toothed beast at bay.  However, if you didn’t pay attention to the titular cat, it will come over to your play area to get the attention it feels it so richly deserves.  When Honga visits, he eats your supplies (starting with the most valuable) and won’t leave until either a bonus card shoos him away or another player neglects to point a hand towards his space. 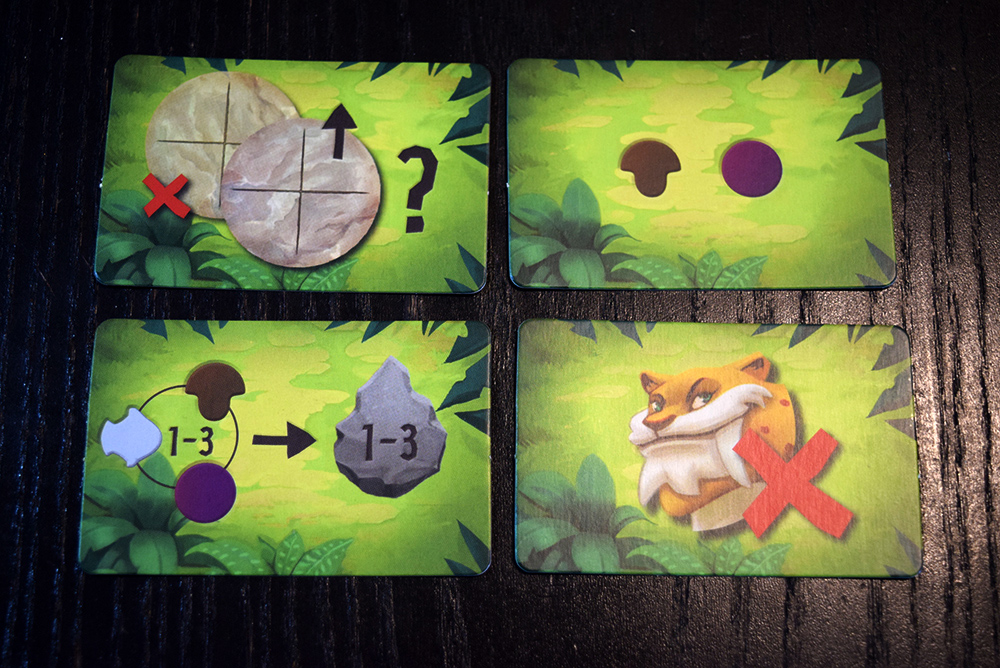 Andrew
I’m just going to come out and say it – Honga is a bit of a jerk.

Jess
Hey, it’s not the kitty’s fault if you ignore your responsibilities to give it pets!…but yeah, you probably want to get rid of him as soon as you can. 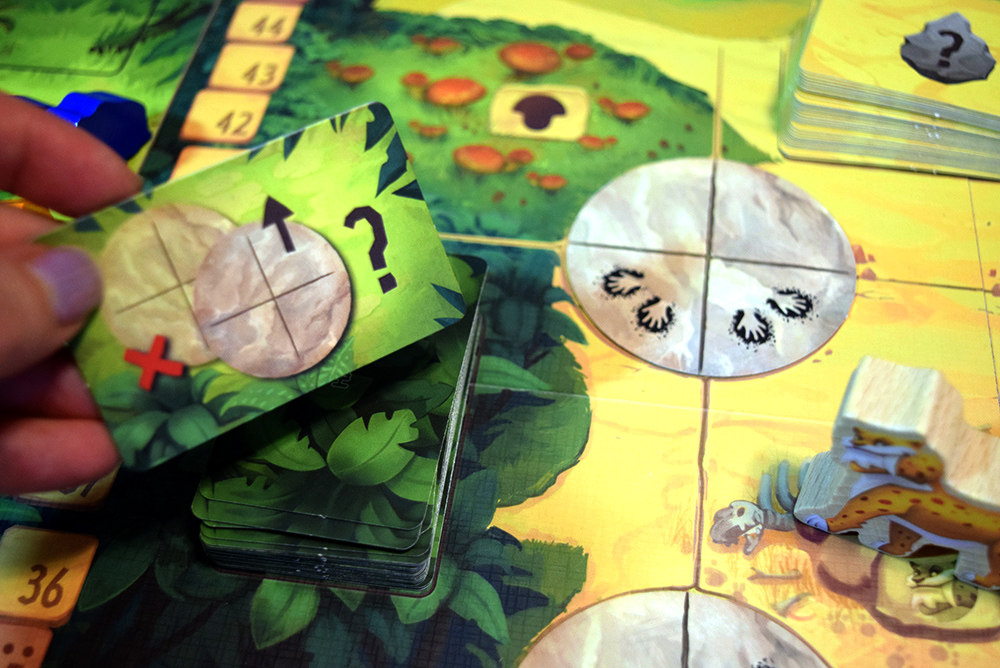 Honga is a pretty straightforward game, making it perfect for family game night.  While the action tile mechanism might take a little getting used to for younger players, it’s really quite clever while being easy to engage.  And while it’s no brain-burner, it’s not exactly a filler either, providing just enough light decision-making that it kept us interested for its relatively short playtime.  The art is great, the component quality is overall extremely high (those inset player boards are great!) and its just really well presented.  Honga is a perfect game for family (or casual) game nights, and we highly recommend checking it out! 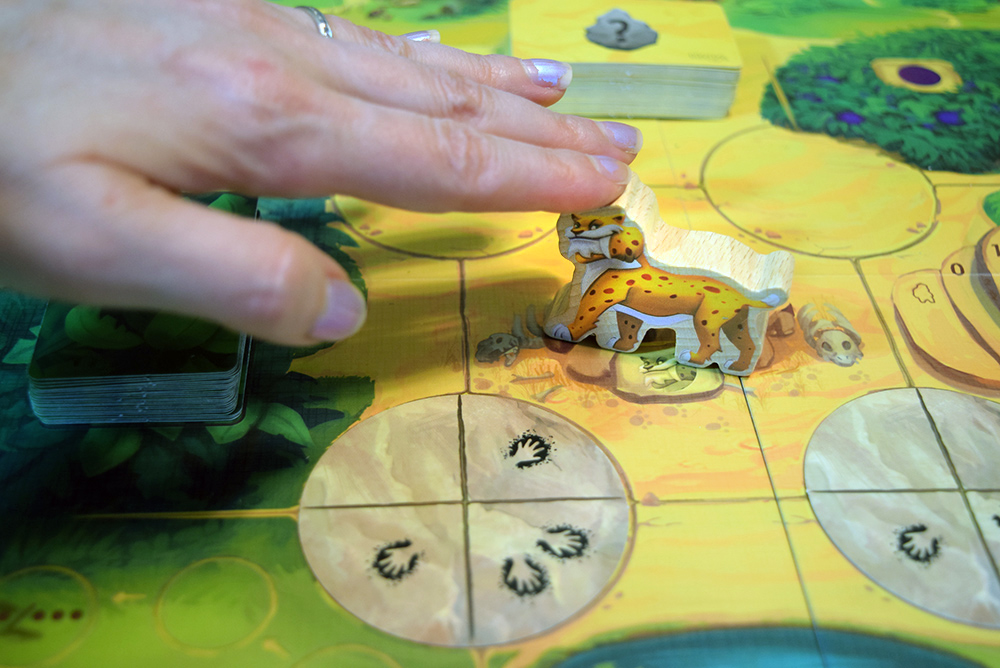