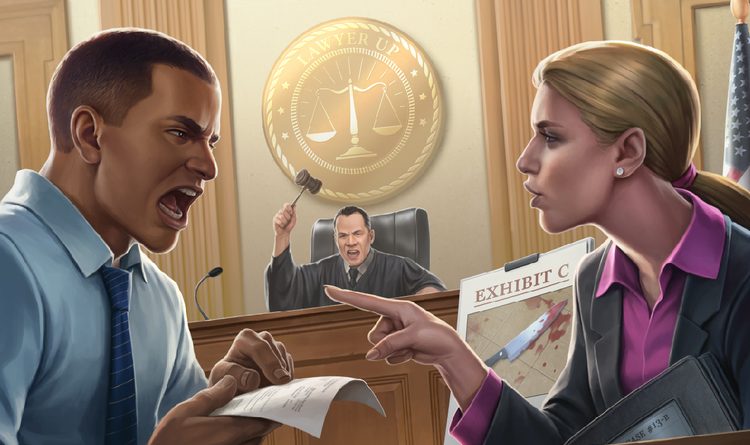 
Lawyer Up, from Samuel W. Bailey Mike Gnade, is wrapping up a very successful run on Kickstarter right now, once again proving to us that lawyer-themed games can be (surprisingly) excellent.  Lawyer Up describes itself as an ‘asymmetrical 2-player courtroom drama card game’, and that honestly feels pretty apropos (though you only get as much drama as you’re willing to put into it, in all fairness).  However, what that snappy marketing line leaves off is that it features not only the hand management and clever card plays you might imagine, but also that the asymmetry comes not only from the fact that each game has the defense & prosecution ‘build their cases’ by drafting cards, but also from the facts of whatever case you might be trying.  So let’s end this opening statement and start our examination of Lawyer Up! 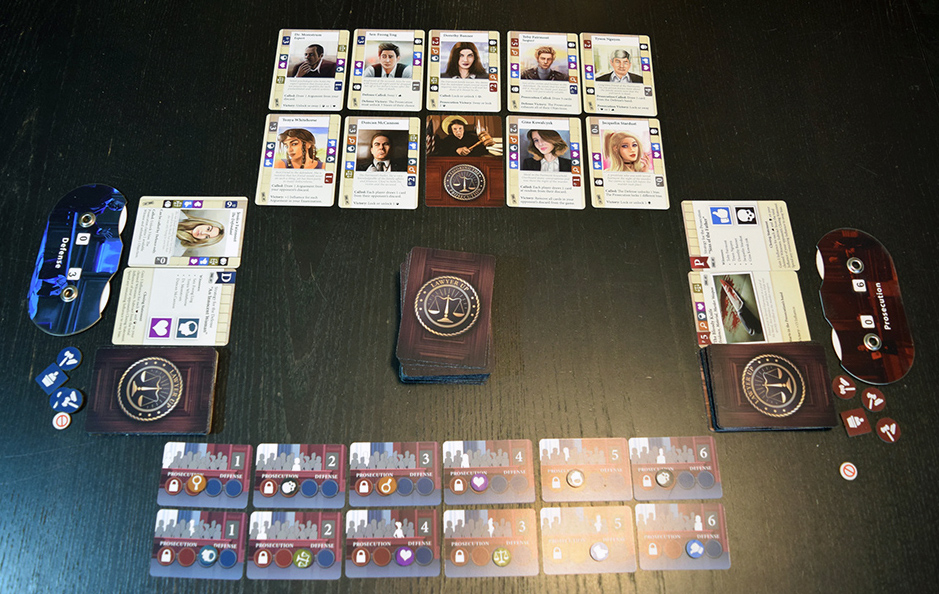 We received a prototype of Lawyer Up for this preview, with the option to request a finished copy after the campaign.  We weren’t otherwise compensated.  All components shown are prototypes

In Lawyer Up, 2 players will go head-to-head in a courtroom battle.  The prosecution’s goal is to sway the jury to see that the defendant is guilty.  The defense, on the other hand, needs to ensure that doesn’t happen – poking holes in the prosecution’s arguments, presenting contrary evidence & testimony, and making sure that at least one member of the jury isn’t convinced of the defendant’s guilt.

A trial in Lawyer Up takes place over two main phases.  In the Discovery phase, players will draw cards from the evidence deck 3-at-a-time.  1 of these cards will go into that player’s own deck, the second gets added to their opponent’s deck, and the third will be added to the ‘buried evidence’ deck.  The key concepts here are that you obviously want to make sure that you’re holding the cards that will serve your case best, but you’ll also want to prevent opposing counsel from getting their hands on powerful cards.  Dropping those cards in ‘buried evidence’ is a mostly safe option, but there are cards that will let players dig through that deck, so ‘buried’ doesn’t necessarily mean gone. 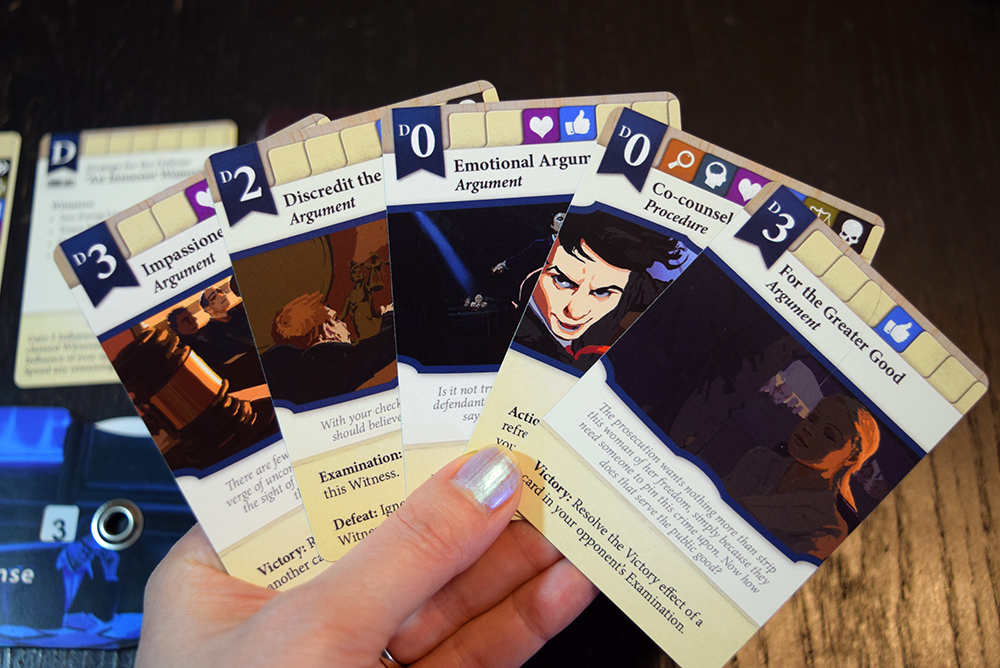 Once both players have gone through discovery and built up their deck, it’s time for the trial.  This main phase of the game consists of players taking turns calling calling witnesses, and then examining those witnesses in order to build up their credibility with the jury and ultimately influence its members towards their side of the case.

Examination involves the attorneys taking turns playing cards, building chains of evidence and arguments (through a cleverly-simple symbol matching system).  The player who manages to make the biggest impact during examination wins the witness, and gain some influence over the jury.

Often, cards will have extra effects when played, including cards which are more powerful when played by either prosecution or defense, bombshell evidence which can only be played under particular circumstances, or even powerful legal procedures that can manipulate the state of the courtroom…sometimes at the expense of the judge’s favor (without which you will find yourself in precarious situations). 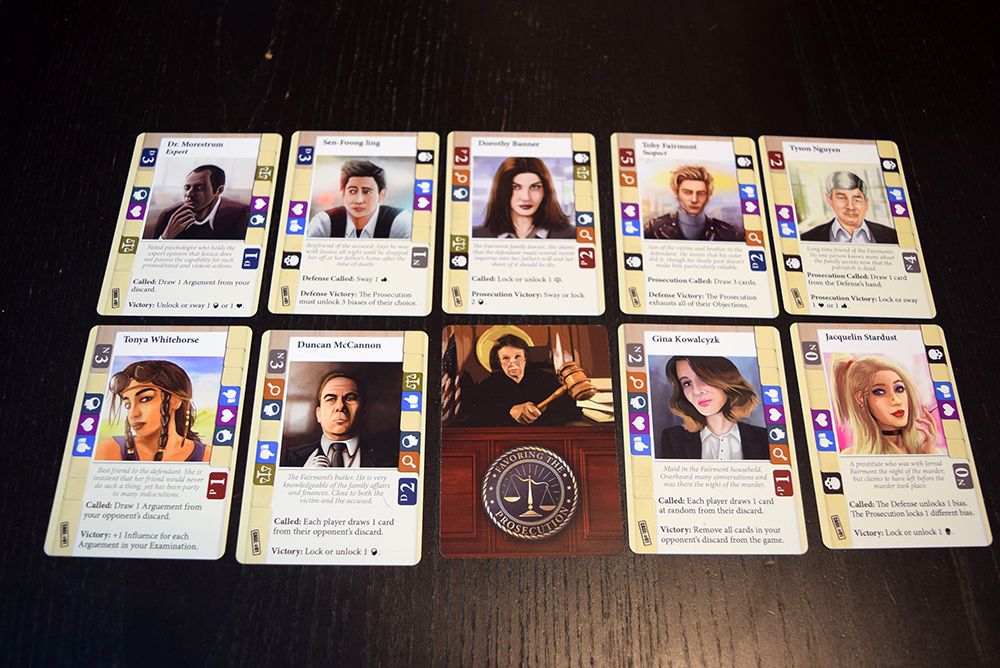 With each witness called, the trial draws closer and closer to its end, and once the dust settles, the attorney who managed to win over key witnesses (and played their cards just right) will win the case. 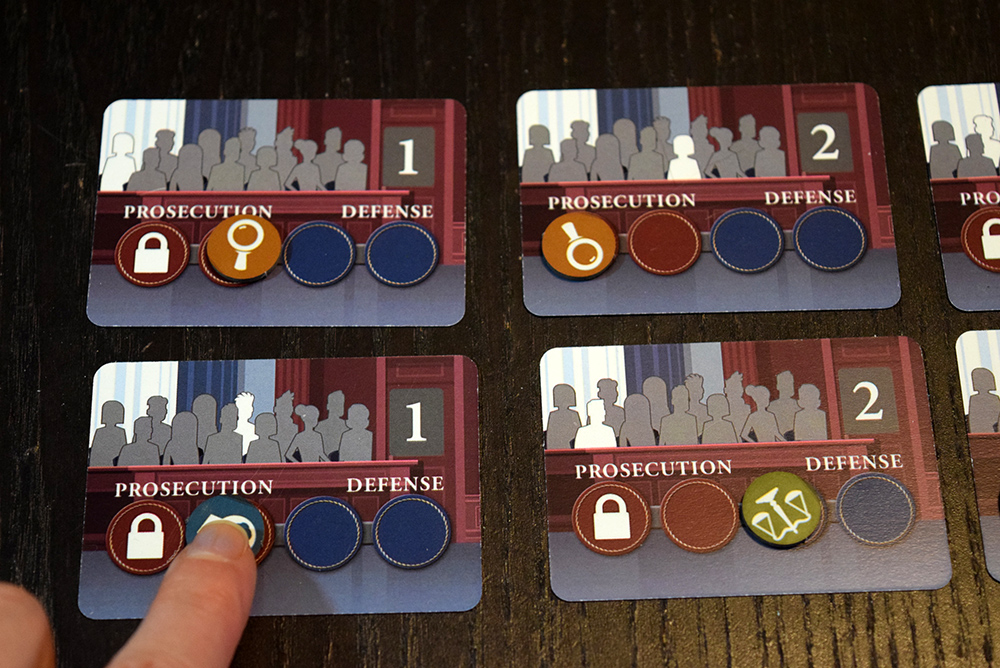 So, like we said at the top, we underestimated legal-themed games in the past, and in at least one other case found ourselves kinda loving a game that threatened to be, well, pretty dry.  The good news is that Lawyer Up is even easier to engage and even more dynamic than High Treason, and the great news is that there’s even more variety in Lawyer Up.  The Kickstarter features multiple unique trials to be played through, including some expansion content that features period cases from the Witch Trials and a mobster-style criminal case! 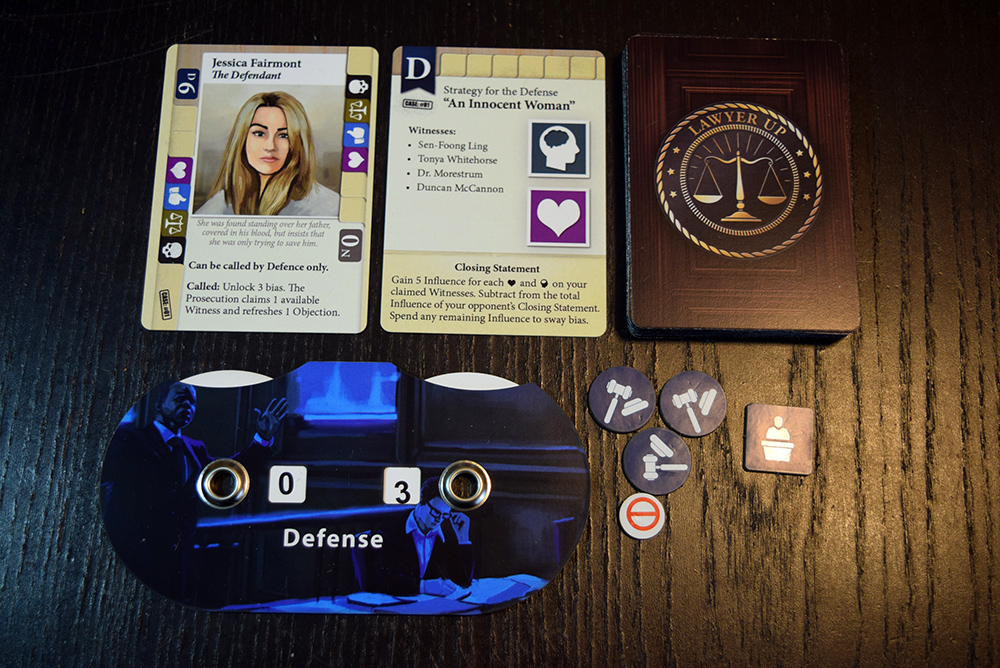 On the whole, we were really pleased with Lawyer Up.  Between the clever design, easy-to-engage gameplay, and what we hope will be a fairly wide variety of cases, this small-box game promises some big gameplay, and we absolutely recommend checking out the Kickstarter asap!