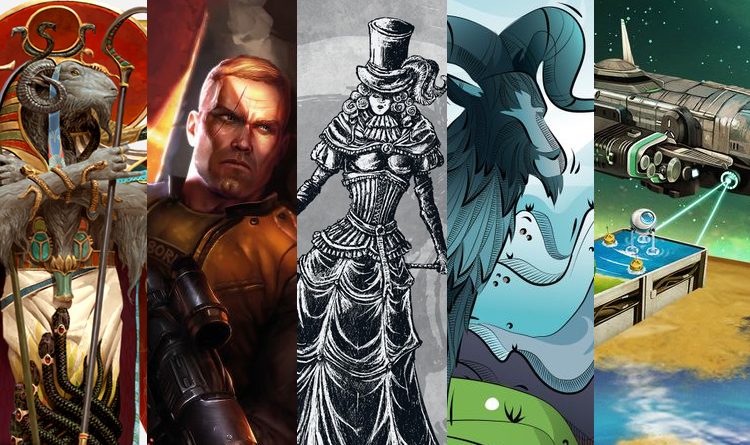 CMON is well know for their huge, mini-packed games and this week they are Kickstarting the newest game in that vein: Ankh: Gods of Egypt. In the game everyone plays as different ancient Egyptian gods battling it out to become the one ultimate god. To achieve victory, players will recruit worshipers, have them build monuments, summon monsters, and guide warriors to battle in their honor. 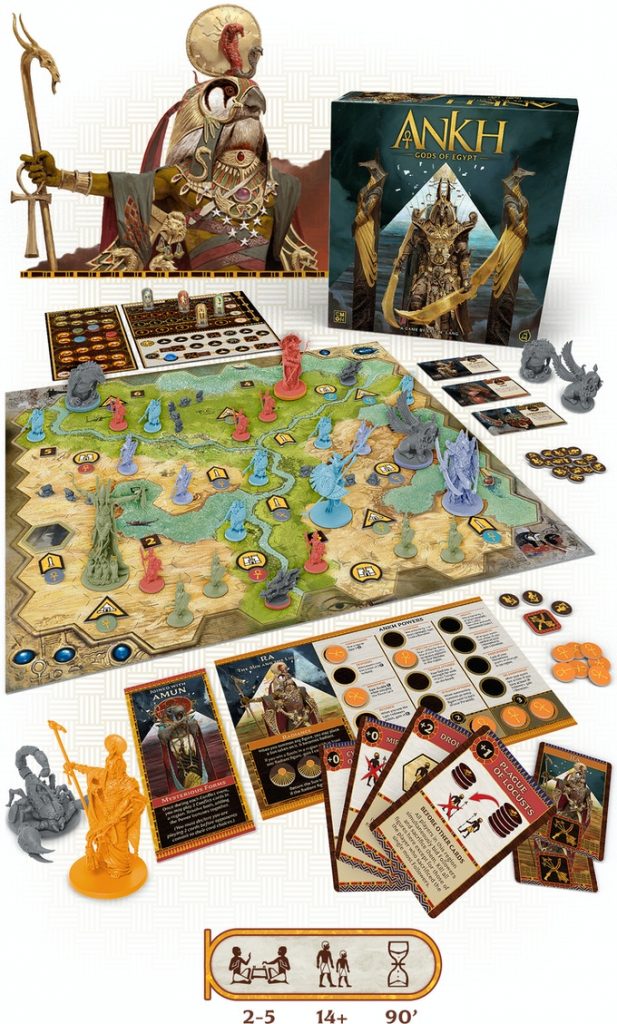 As always, the production quality looks fantastic and the minis are drop-dead gorgeous. I like that there are multiple paths to victory and the twist cards, which allow you to play miracles, plagues, droughts, and more, look like they help make battles more dynamic. You can learn more about Ankh: Gods of Egypt here on Kickstarter.

Wolfenstein: The Board Game

What happens when you cross the classic feel of Heroquest with some butt-kicking of Nazi scum? You might get Wolfenstein: The Board Game! Based on the popular video game developed by MachineGames, Wolfenstein sets players in a cooperative dungeon delve in an alternate history where Nazis won the Second World War. Infiltrate the castle, fight Nazi’s, and complete your goals before time runs out. 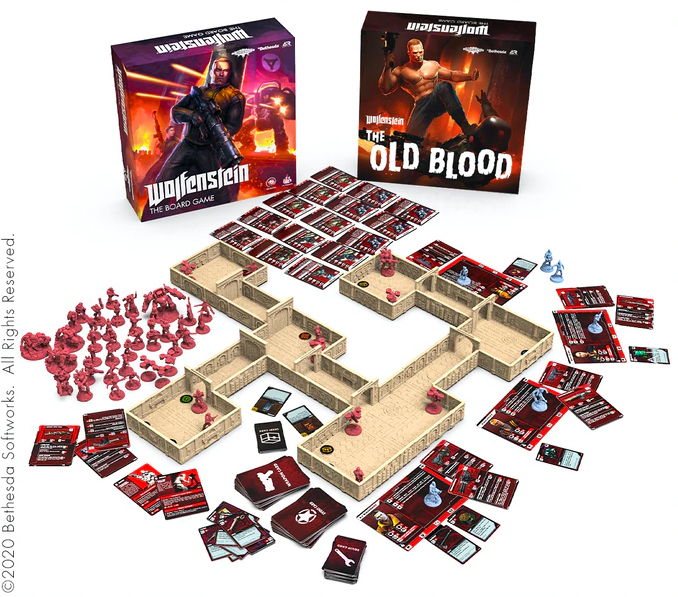 Wolfenstein: The Board Game looks like an awesome choice for fans of the series, but if you’ve never played before, you may still enjoy it. The game looks like a typical dungeon crawler, but you can mix it up with the 3 different enemy styles (Nazi zombies, Mechanized Nazis, or a mixture of both). You’ll even get the chance to take down the dreaded Mecha-Hitler. Check out Wolfenstein: The Board Game on Kickstarter here to learn more.

The Kingdom of Brie has created a magical cheese and unfortunately every rat in the world has heard the news.  Besieged by vermin, the Kingdom has hired you, a rat-catcher, to save everyone from the ravenous rats. This is easier said than done when the rats are mutating from eating all the cheese. The Ratcatcher is a solo-play game with a randomly generated city. You’ll need to gather up the magical cheese, lay traps, and fight numerous rats through a dice-based combat system. In order to win, the player must defeat the “Nemesis rat”; a super-powered rodent that seems to be controlling the rat invasion. 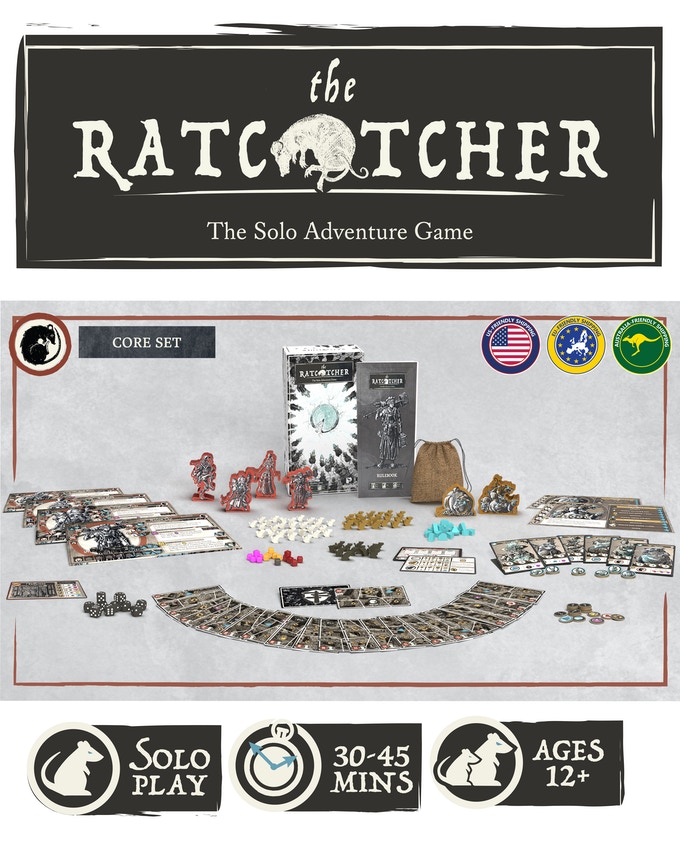 I love the stylized look of the game and who can resist all those rat meeples. The gameplay looks like it could easily become overwhelming, so you need plan well and hope the dice are on your side. Catch yourself a copy by heading over to The Ratcatcher Kickstarter here.

I love it when I can play a bunch of games in one night so quick play, easy to learn games are great. Chad DeShon, founder of BoardGameTables.com, is Kickstarting 3 of those kinds of games with one project. Each one is designed to play in under 10 minutes and only take 30 seconds to learn. Mountain Goats is a king-of-the-hill, dice rolling game where you want to move your goat to the top of the mountain where it can score points until someone else knocks it off. Sequoia is an area influence game where you want to grow the tallest tree. You’ll roll dice, make sets, and use them to determine which trees you will grow; trying to build up your majority on them. GPS is a spinner based game in which you must try to get all of your satellites in order orbiting the planet. Each turn you’ll spin the rocket and then everyone can place a satellite of their choice on the space the spinner points to. 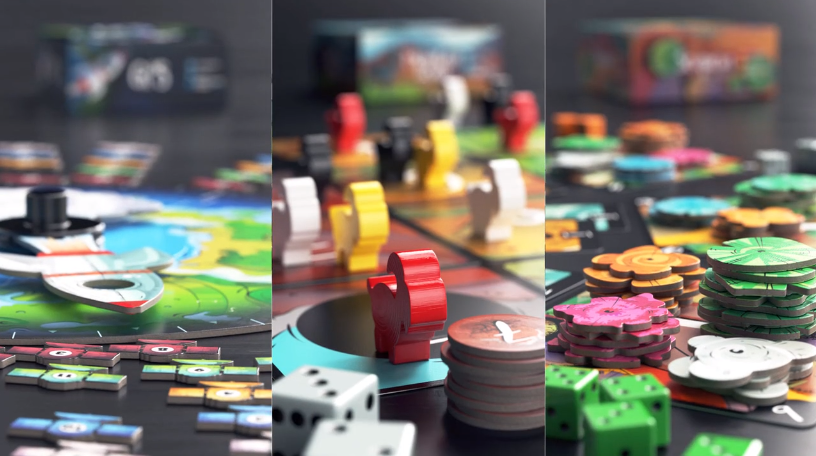 All three games look colorful, bright, and light enough to be family friendly. Get a more in-depth look at GPS, Sequoia, and Mountain Goats here on Kickstarter.

In Planet Unknown players must develop the best planet they can with the resources available to them. Each turn players will draft polyomino tiles from the rotating offer in the middle of the table and then must fuind a place to put those tiles on their planet. Once you place a tile you can take the two actions associated with the two infrastructure types on the tile. As you add more tiles to your planet, you build up your engine; getting more actions and making each turn more efficient. Whoever score the most points from their planet wins.

I like Planet Unknown’s lazy Susan drafting and the deluxe version (pictured above) looks like it will hold the pieces better than the retail version. Overall the game looks puzzley and I’m a fan of the fact that you can choose between everyone playing with the same planet setup or flip your boards over for asymmetrical planets; giving each player different requirements for placement. Rocket on over to Planet Unknown’s Kickstarter to learn more.