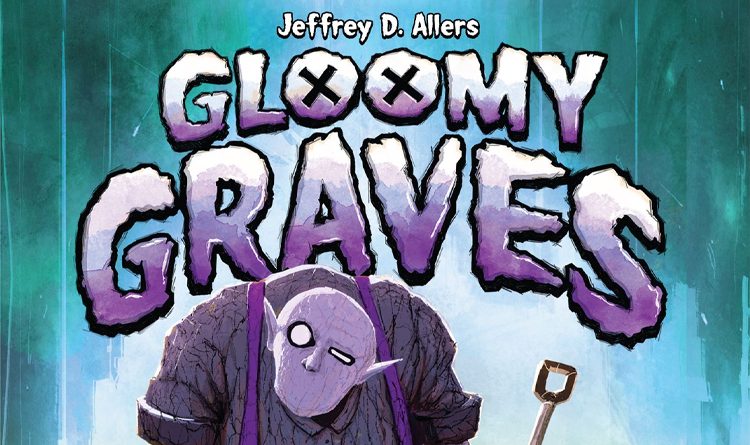 Gloomy Graves is both macabre and colorful in its theme, and clever in its gameplay.  The puzzle it presents is both one of card placement and timing, giving you a nice bite of complexity to go along with its small size.

In the middle of a raging war waged by rabid pixies, savage dragons, and killer unicorns, there stands one very important question: What do we do with all these bodies? Seriously, how do we keep ourselves from being knee-deep in goblin guts all the time?

Gloomy Graves has the answer. Hire perplexed-looking ogres to bury the bodies in tidy little piles. Voila! Your warzone is free of postmortem pixies and decapitated dragons with minimal fuss. 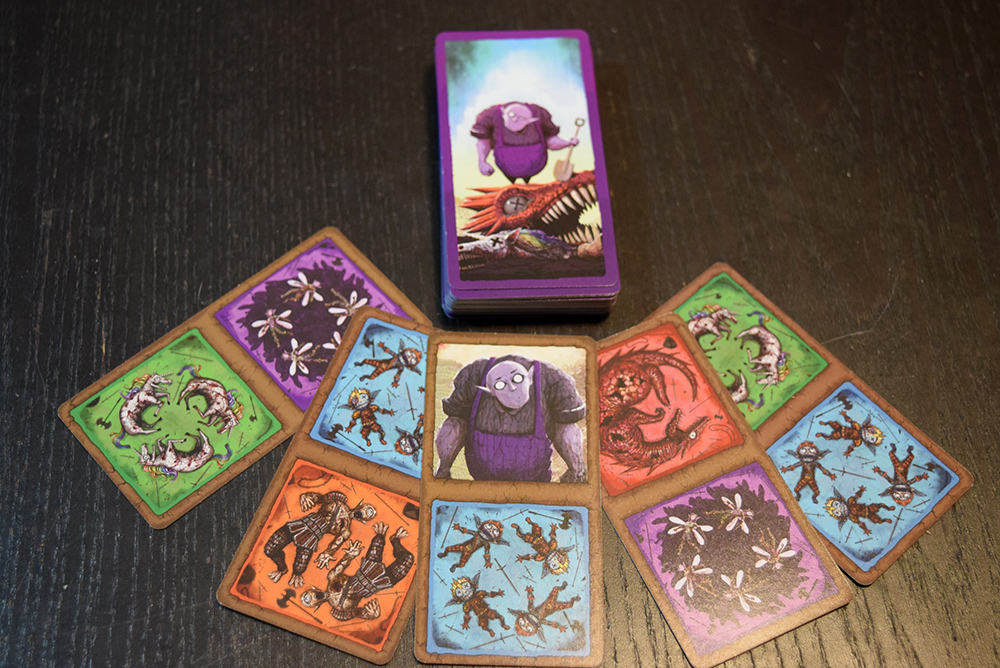 Gameosity got a copy of Gloomy Graves for our consideration and possible review.  We only publish reviews of games we think are worth discussing, so we weren’t otherwise compensated.

Andrew
Honestly, it’s a good question – ever since you made that D&D character who was the undertaker, I’ve always wondered about the byproduct of fantasy warfare.

Gloomy Graves is a card drafting/laying game where you must bury cards to build sets which will score you points. Each turn, you will be selecting 2 cards from your hand. One will be buried in your private crypt while the other will go into the communal graveyard.

When placing a card you must adhere to a few rules: 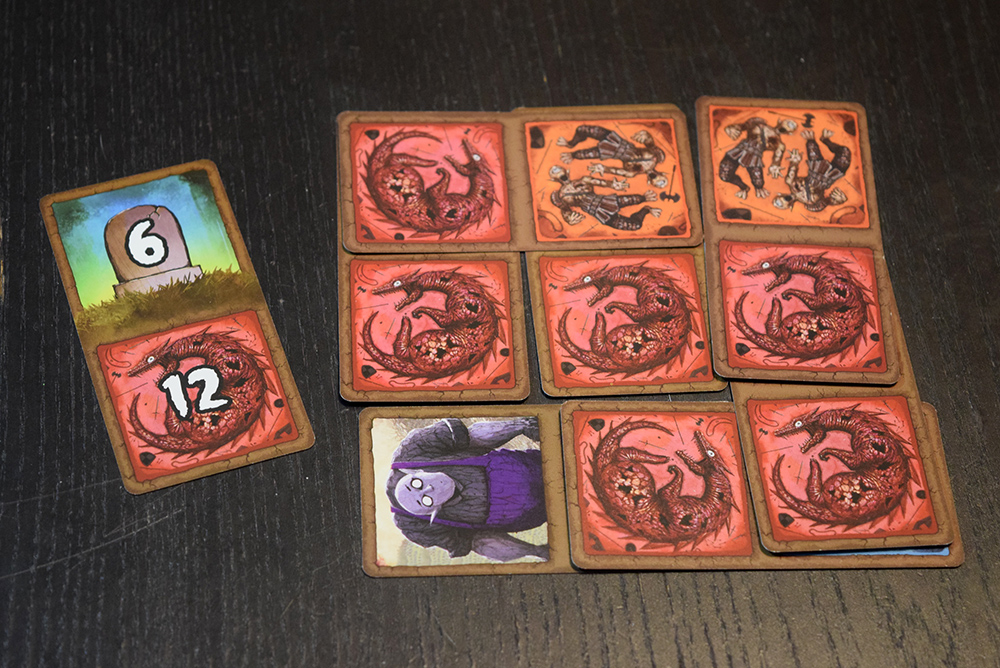 Your private crypt can only be a 3×3 grid. Each card has two different types of bodies on it so they take up 2 out of 3 spaces in a line. You can place a card anywhere you like so long as it fits in the grid and is either adjacent or covering another card.

The communal graveyard works a little differently as there is no size restriction, but when placing a card you must cover exactly 1/2 of another card. This way the graveyard grows outward each turn.

Once you’ve placed both your cards, you can check to see if you have created any sets worth scoring. You can only score a set that matches one of the two monster types you placed in the communal graveyard on your current turn. When counting your set, you include all adjacent monsters of 1 type in both the communal graveyard and your private crypt. Gravediggers are wilds and count as any type of corpse you are scoring and if you placed a gravedigger in the communal grave then you can choose any set you like to score, but be mindful: You can only score each monster type once. 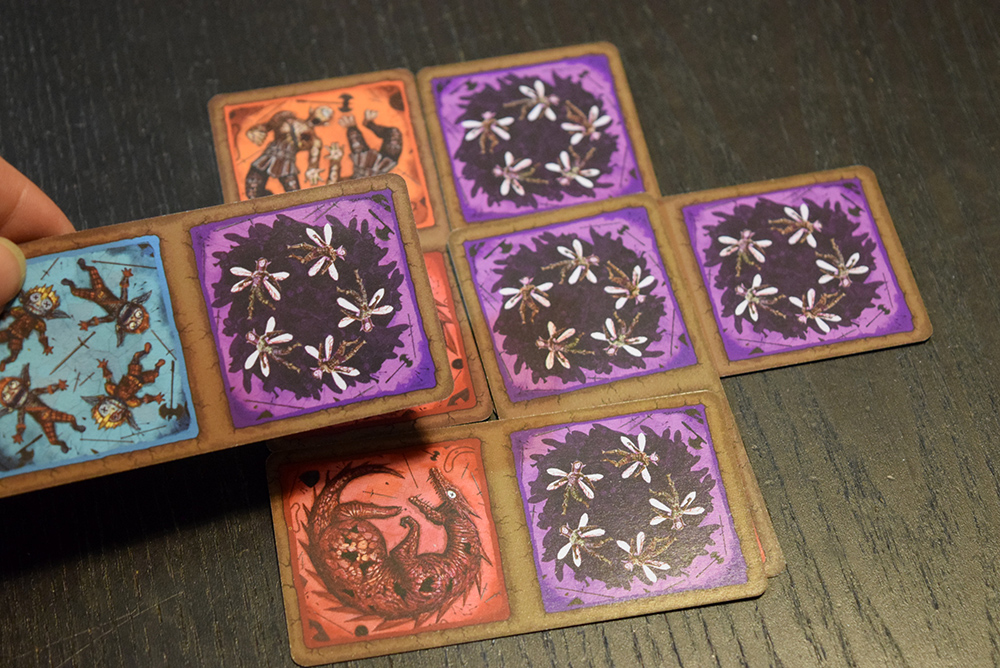 Knowing when to score a set is the key to the game as there are score cards for each type of monster and the more corpses in the set you have the higher the score you can get. Once a score card has been taken though, no one else can get that number. 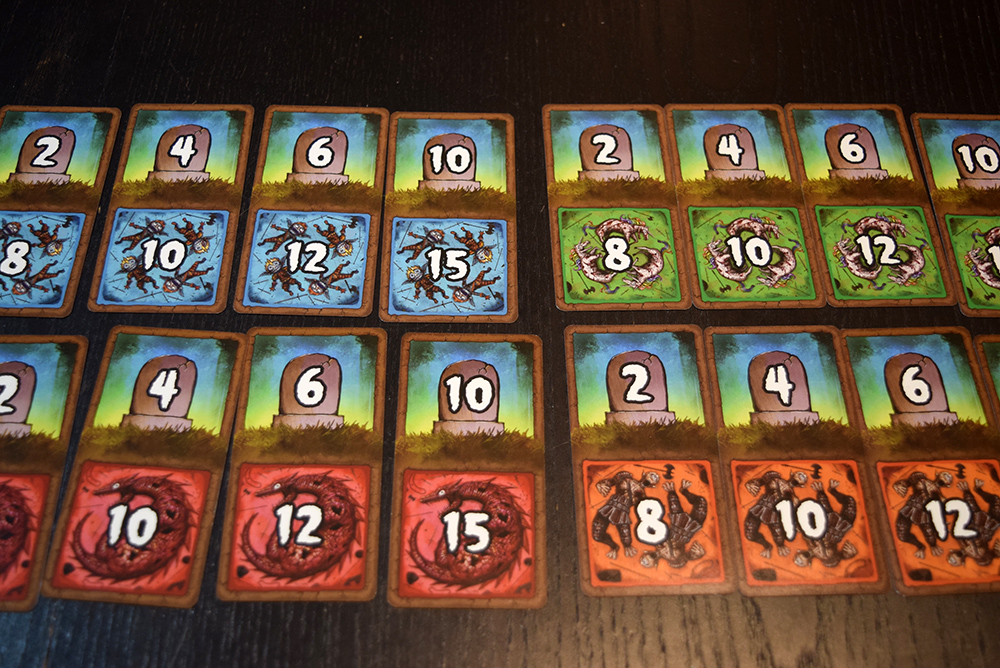 The game is triggered once someone has 5 score cards and whoever has the most points wins, so the question is: Do you score early trying to race to the end or do you build up your sets hoping to grab the higher scoring cards?

Jess
That can often be a bad sign in a game – being able to rush the end can short-circuit things sometimes. But I didn’t have much of a problem with that in Gloomy Graves, maybe since it’s a relatively light game to begin with.

Andrew
I agree on both counts. There’s good tension here, between holding off on scoring to try and get a bigger set, and of course also worrying that you’re setting your opponent up for a big score because of what you’re adding to the communal graveyard. It’s simple but it’s smart!

Gloomy Graves really isn’t a complex game (You can learn it in just a few minutes), but can be a thinky game. The puzzley nature of card-placement combined the timing aspect of figuring out when to score makes for a surprisingly strategic game with a darkly humorous theme. I like the communal graveyard as it keeps the game from becoming too solitaire. You have to stay aware of what your opponents are doing as not only do you want to capitalize on the sets they grow there, but also you want to be able to anticipate when they might try to score. If you play it right, you could snatch a great score card using what your opponents make available to you!

Player-count wise, I think the game plays well at two. Four players ends up slowing everything down more than I prefer, so I don’t think this one will hit the table much during our get-togethers with friends. Lastly, the theme, while gruesome, doesn’t really bother me, but I could see it being a problem if playing with younger players.

Jess
Actually, to be honest, I think the theme is great. I get that it won’t be everyone’s cup of tea, but it’s bloodlessly gory in a kinda hilarious way.

Overall I think Gloomy Graves is worth trying out if you like puzzle-style card games, especially if you appreciate a grisly twist.  It’s portable, quick, and lots of fun, and definitely one to check out!