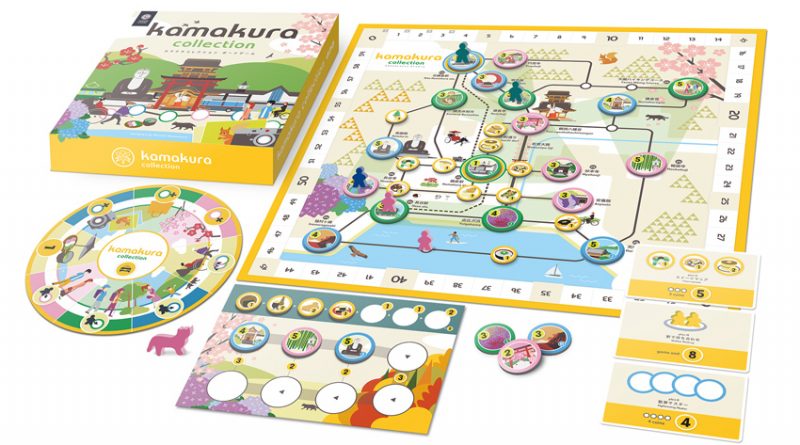 Though it might be hard to find right now, Kamakura Collection is a charming, fairly abstract set collection game, themed around tourists visiting the titular city, trying to have the most enjoyable time while they explore the sites.

Of all the many and varied themes that we’ve seen in board games, there are few that inspire the sort of pastoral joy of games which focus on travel and exploration.  Kamakura Collection, named for the Japanese city that it depicts, is a fine example of it – as we traveled around the city board, taking in the sights, we couldn’t help but feel a sense of peace and satisfaction, a sort of gentle relaxation really, that made every minute of playing this relatively simple set-collection game a…wait, why are you going to the Kenchoji Temple?  I was going to the Kenchoji temple.

Jess
Well, because it completes my travel itinerary, silly! Also, the sweets I want to snag are right next to it, so I’ll complete that bonus card, too.

In Kamakura Collection, each player will separately explore the titular city, aiming to see its sights and sample its snacks in the most enjoyable (point-generating) way possible.  With each movement, players have the opportunity to collect discs representing their travels – the game calls these cardboard discs ‘coins’ – and by collecting the right set of coins in the right sequence, players will be able to obtain bonus points and complete scoring objectives. 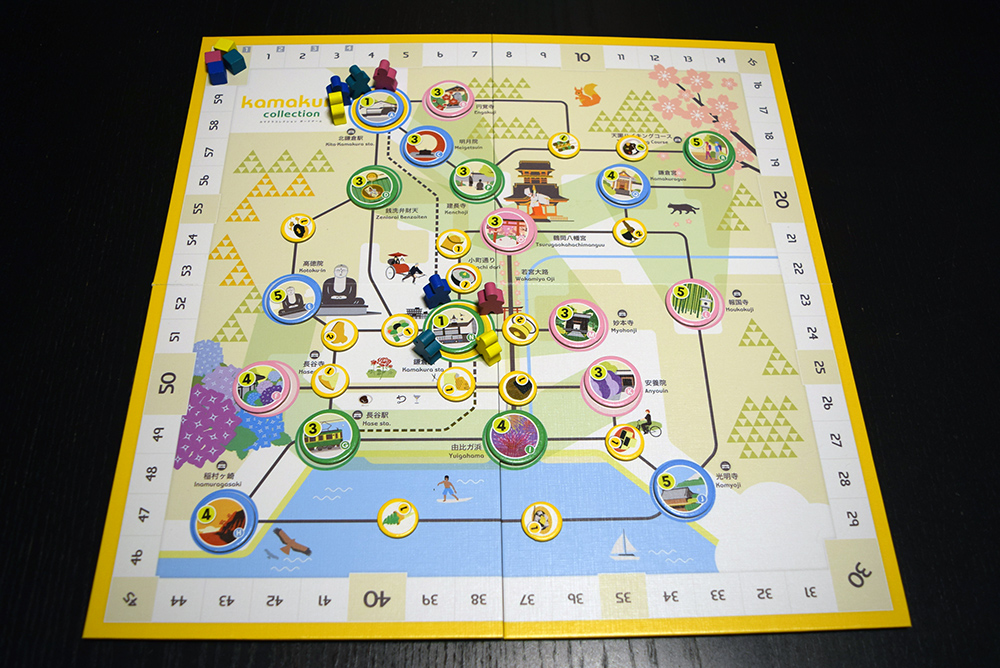 On your turn, you will chose an action to take by moving your cat on the Sightseeing Action board.  Available actions include moving around the city either by walking, rickshaw, or taxi, taking in sights, hiring a taxi, or just straight-up getting a point.  You cannot leave your cat in place, so it is impossible to take the same action twice in a row, and you also can’t pick an action already occupied by another player’s cat (territorial animals that they are). 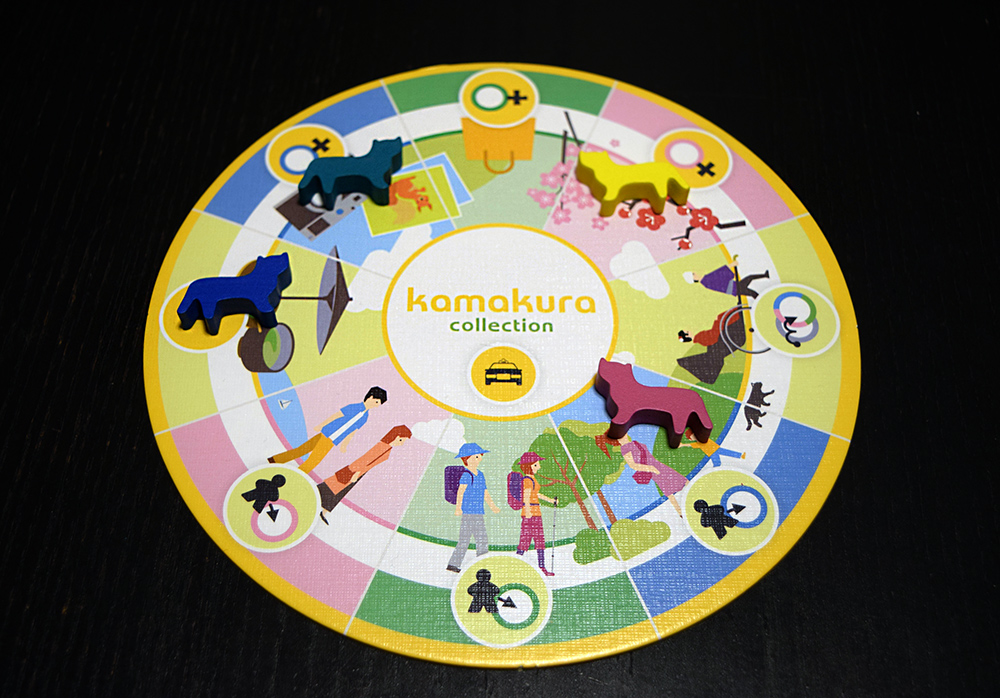 Jess
I know some of you are probably all like ‘why’s the action selection piece a cat?’. Well, it’s because this game is great, that’s why.

The restrictions on how you select actions is at the heart of the strategy in Kamakura Collection.  Your movement options are limited, and it can take several smartly-planned turns to get one of your pieces to a locale you’re trying to collect and to grab the coin there.  The fact that each player controls 2 pawns on the board, and that players will block each other from landing on spaces, means that Kamakura Collection only gets more strategic as the player count goes up, as competition over actions and board spaces gets tighter and tighter. 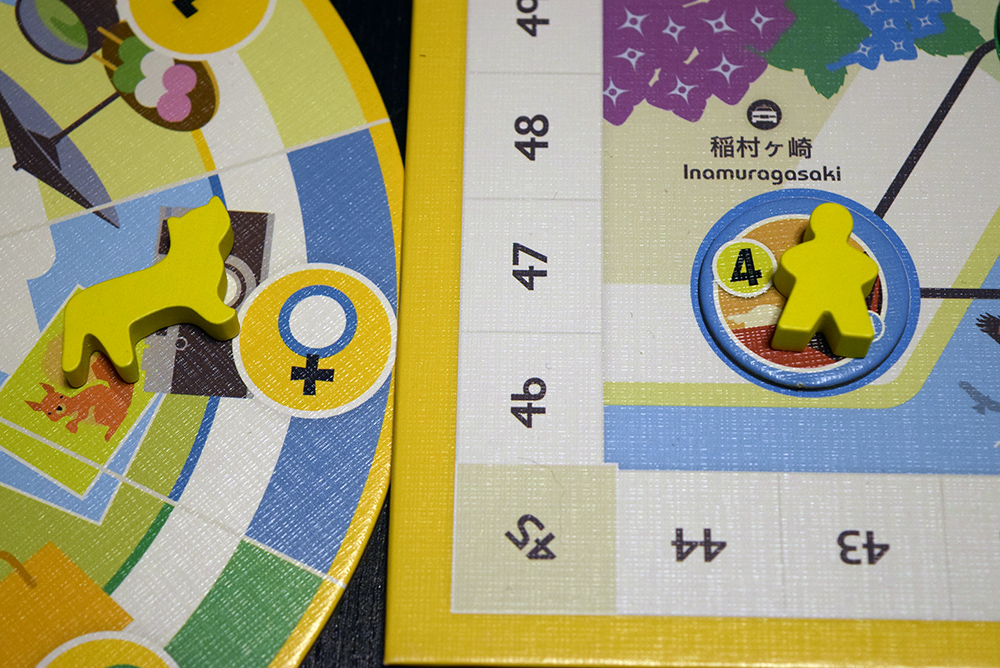 Andrew
The rulebook even points out that Kamakura Collection is a very popular, often crowded tourist destination, so this is a bit of the theme coming to the fore. On the other hand, Kamakura Collection adjusts for 2 players by reducing the available locale coins to keep things tight. 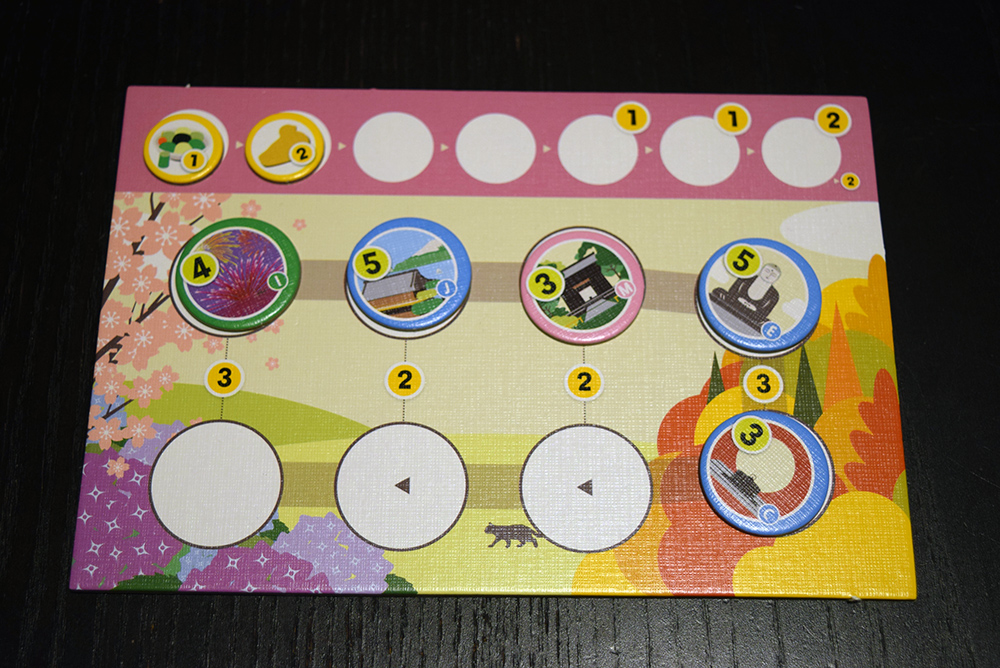 As players gather coins, they will be added to their Memento boards.  These boards serve two functions – they give the players somewhere to store their coins (the collection order of which can add big bonus points), and also serve to track the end of the game, because once a player has grabbed their eighth coin, each other player takes a final turn and then scores are tallied. 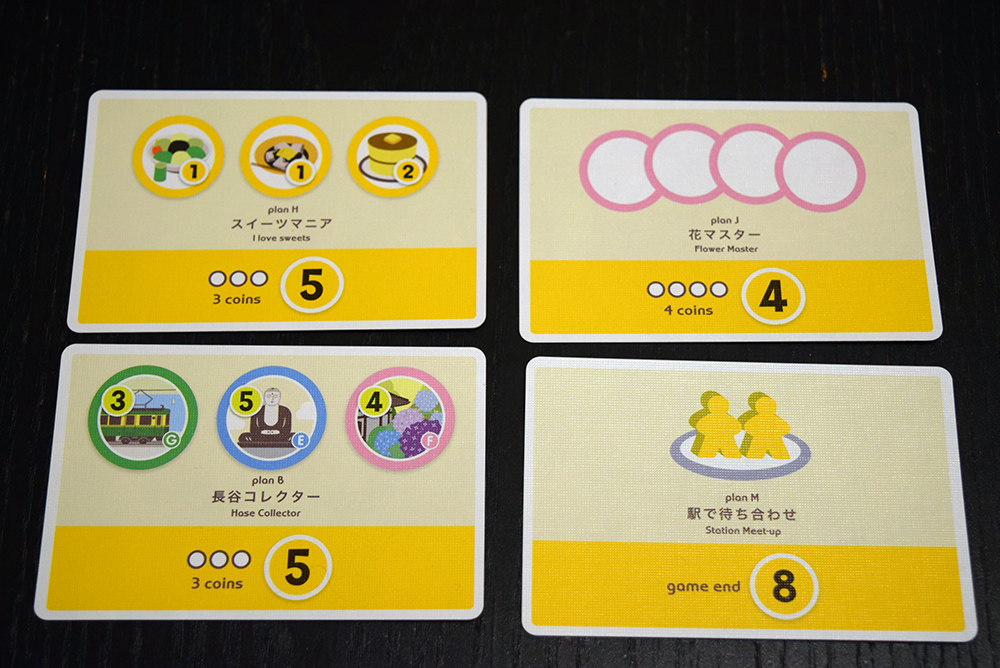 While players are gathering coins, they should be keeping an eye on the Exclusive Tour cards, which are another potential source of end-game scoring.  Taxi cards allow players to immediately move to the card’s indicated location, but can also be kept for points should a player manage to get the coin for that spot before the game is over.  Knowing when to use a taxi is really valuable, because mobility is key to Kamakura Collection, especially since it’s not just what coins you collect that matter, but also potentially the order that you grab them for bonus points. 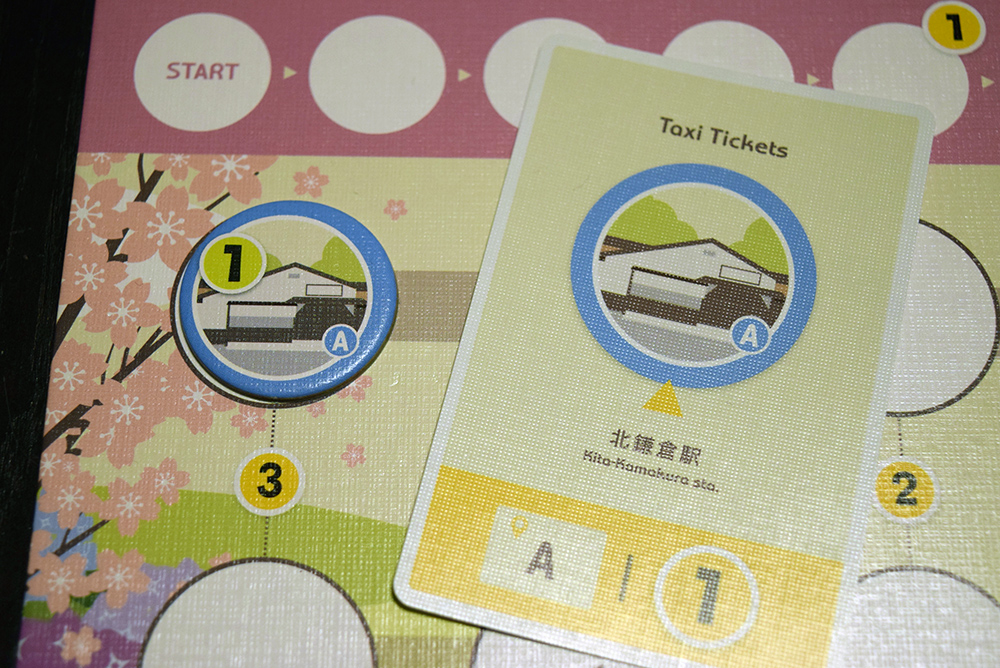 Jess
I think Kamakura Collection is really charming! It’s a pretty game, and I love the theme of wandering around a beautiful city, seeing the sights and munching on snacks!

Andrew
Me too, though I’m sure it doesn’t hurt that you’re really good at set collection games in general. I like Kamakura Collection too, but I do think it’s got some little snags people should consider. 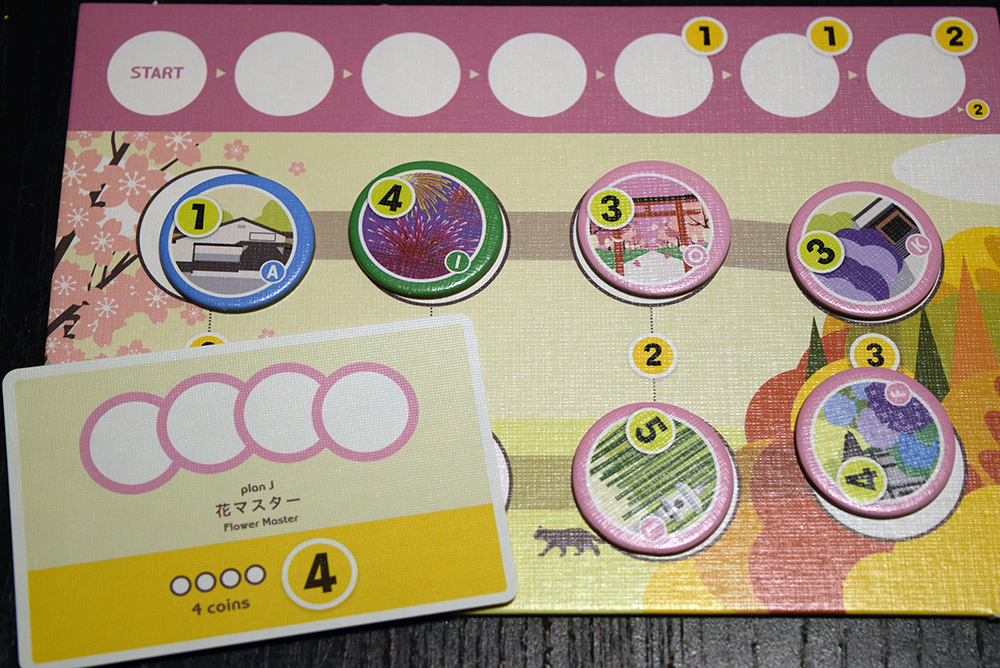 Firstly, the layout of the city is (appropriately) static – the food tokens get randomly distributed each game, sure, but the sights stay the same, and by the second or third game, that lack of randomness means that you’ll quickly be able to assess if it’s worth even trying for some of the Exclusive Tour cards.  And to that point, especially in a 2 player game where each site only has one coin, if you aren’t the first player to grab a coin indicated on one of the tour cards, all you can do is block the other player from completing the set at best – there’s no chance of scoring those points once another player has started completing the card.

Jess
Yeah, that does kinda suck. And in our first game, you were able to complete 2 objectives within just the first few turns! It was really hard for me to stay competitive at that point!

Andrew
Absolutely, yeah. I think that Kamakura Collection plays differently at 2 than at higher counts. At 3 or 4, the biggest challenge is congestion, both in the city and on the action board. At 2 though, its the puzzley race to get the coins you need before your opponent can box you out, ideally while stopping them from doing the same. 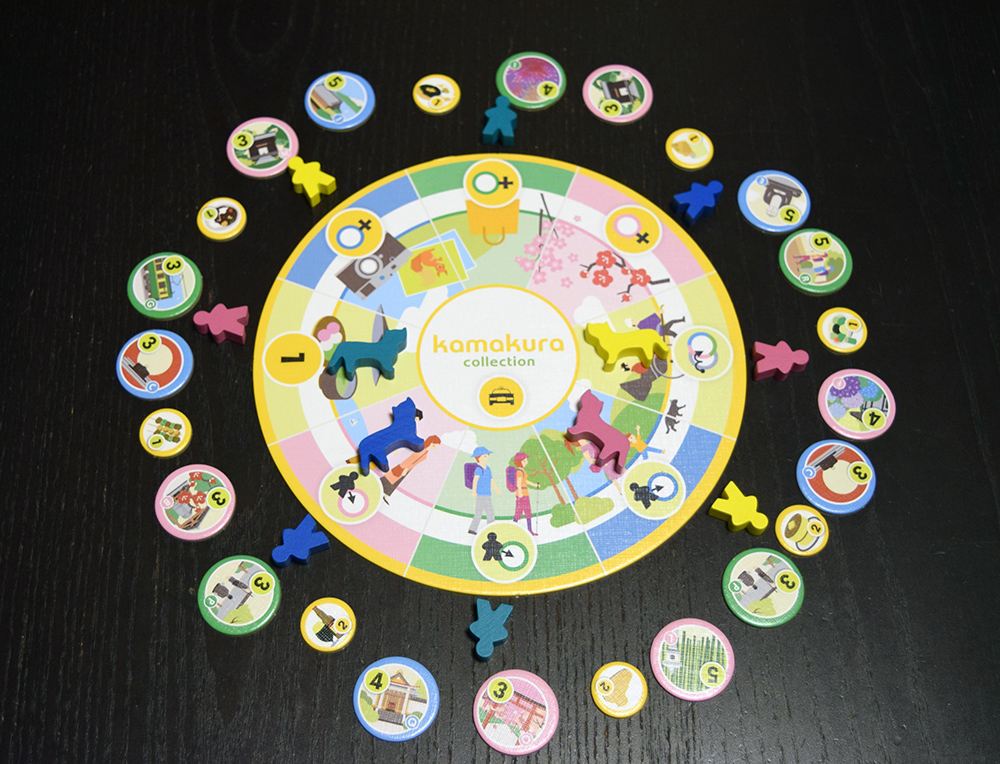 But with those caveats in mind, we definitely enjoyed Kamakura Collection.  It’s a game that rewards planning and just a bit of luck, since your opponents’ actions directly interfere with your options.  And we especially liked how it played with two, though that was when the game was most directly contentious.  Unfortunately, as of this review, the game is pretty rare in America.  It seems to be easier to find in Japan, though, so if the charm and challenge of Kamakura Collection seems like your kind of thing, it’s definitely out there to be found!

(Please note – the link below is to Amazon Japan – there may be other alternatives to getting a copy of the game too.)