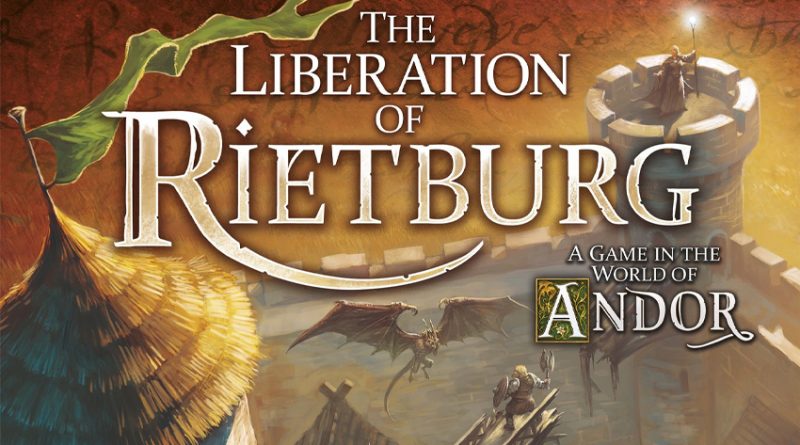 The Liberation of Rietburg is

Now it’s no secret that Team Gameosity loves a good cooperative game.  And up there with some of our favorites is Legends of Andor, a narrative-driven adventure game.  In The Liberation of Rietburg, players will return to the world of Andor, but this time instead of being tasked with defending an entire kingdom over the course of several scenarios, they must instead contend with the defense of the titular city as waves of monsters batter its walls and infiltrate its depths.  Do you and your fellow adventurers have what it takes to protect the city before it’s overrun with monsters?  Lets find out as we take a look at Liberation of Rietburg! 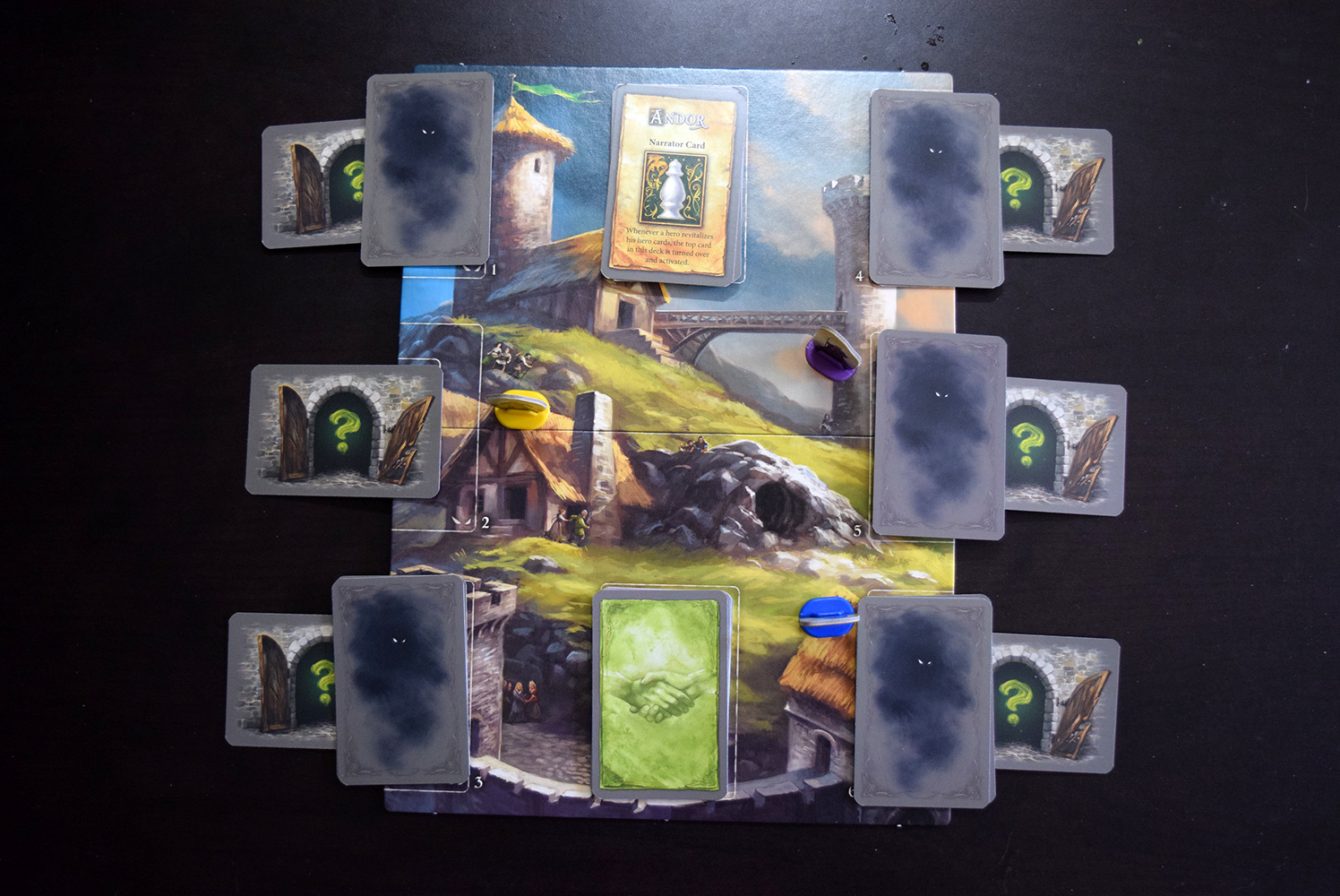 We received a copy of The Liberation of Rietburg for our consideration and possible review.  We only review games we think are worth talking about, so we weren’t otherwise compensated.

Andrew
Worth noting is that you absolutely don’t need to be familiar with Legends of Andor in any way to play The Liberation of Rietburg. Its narrative elements do connect back to the greater Andor storyline, but aren’t the slightest bit required to engage the game

For folks familiar with Legends of Andor, The Liberation of Rietburg aims to provide a similar-feeling gameplay experience in a much shorter playtime – The Liberation of Rietburg usually clocks in around 45 minutes at most, and exchanges the kingdom map and dice-driven combat with action selection and cards.  But we’re going to hold off on further comparisons for the moment and start by just looking at the game on its own merits. 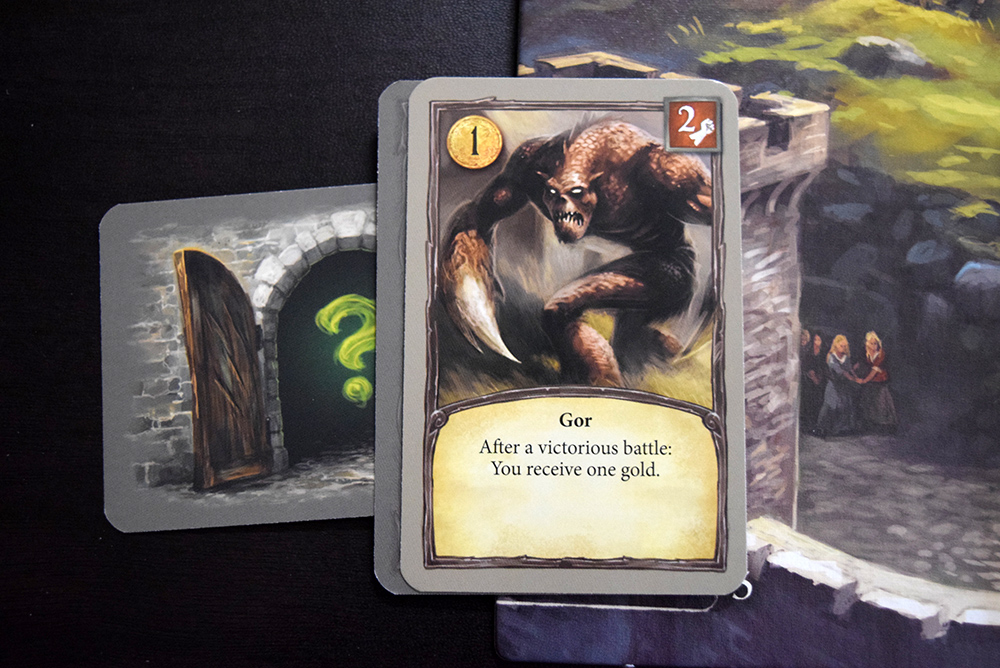 The Liberation of Rietburg is a purely cooperative game, meaning that its the players against the board, and they will either win or lose together.  The city of Rietburg is comprised of 6 locations, each of which has a randomly-placed task.  These tasks are the key to victory in The Liberation of Rietburg – if the players can manage to uncover and overcome 4 of them, then the city (and victory) is secured.  However, that won’t be so easy, as each task starts the game hidden at the bottom of a stack of monster cards, and more will keep piling on as the game goes on. 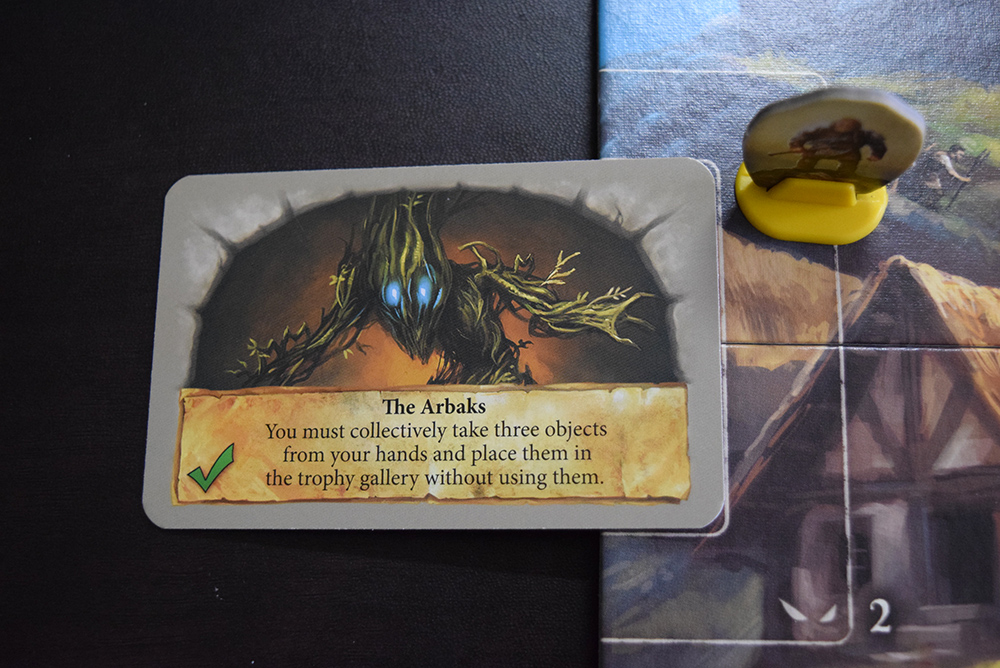 The heroes are far from powerless against the invasion.  All 6 of the heroes defending Rietburg have slightly unique skills and resources that they can use to defeat their foes, such as Kram’s mighty axe or Kheela’s water spirit familiar.  On each player’s turn, they will select one of their hero’s action cards to activate.  These actions typically move heroes from place to place within the city, add or manipulate hero resources, investigate locations, and let heroes fight the enemies attacking the city.

Jess
One of the things I like most about The Liberation of Rietburg is how each hero feels unique, like how Eara’s spells produce a variety of effects, or how Thorn tends to get big reserves of Willpower tokens that lets him make big swings when he’s fighting! The different combinations of heroes makes each game a different tactical puzzle and I love that!

Combat in The Liberation of Rietburg is straightforward – players compare the strength of the battle action they have selected with the strength of the monster at the top of the location where they are fighting.  Items and abilities can be used to further increase the hero’s strength, and other heroes at that location can optionally participate in combat, which is key to defeating some of the bigger baddies that can turn up to threaten the city.  Foes which are felled result in the heroes receiving rewards, such as treasure, coin, and allies. 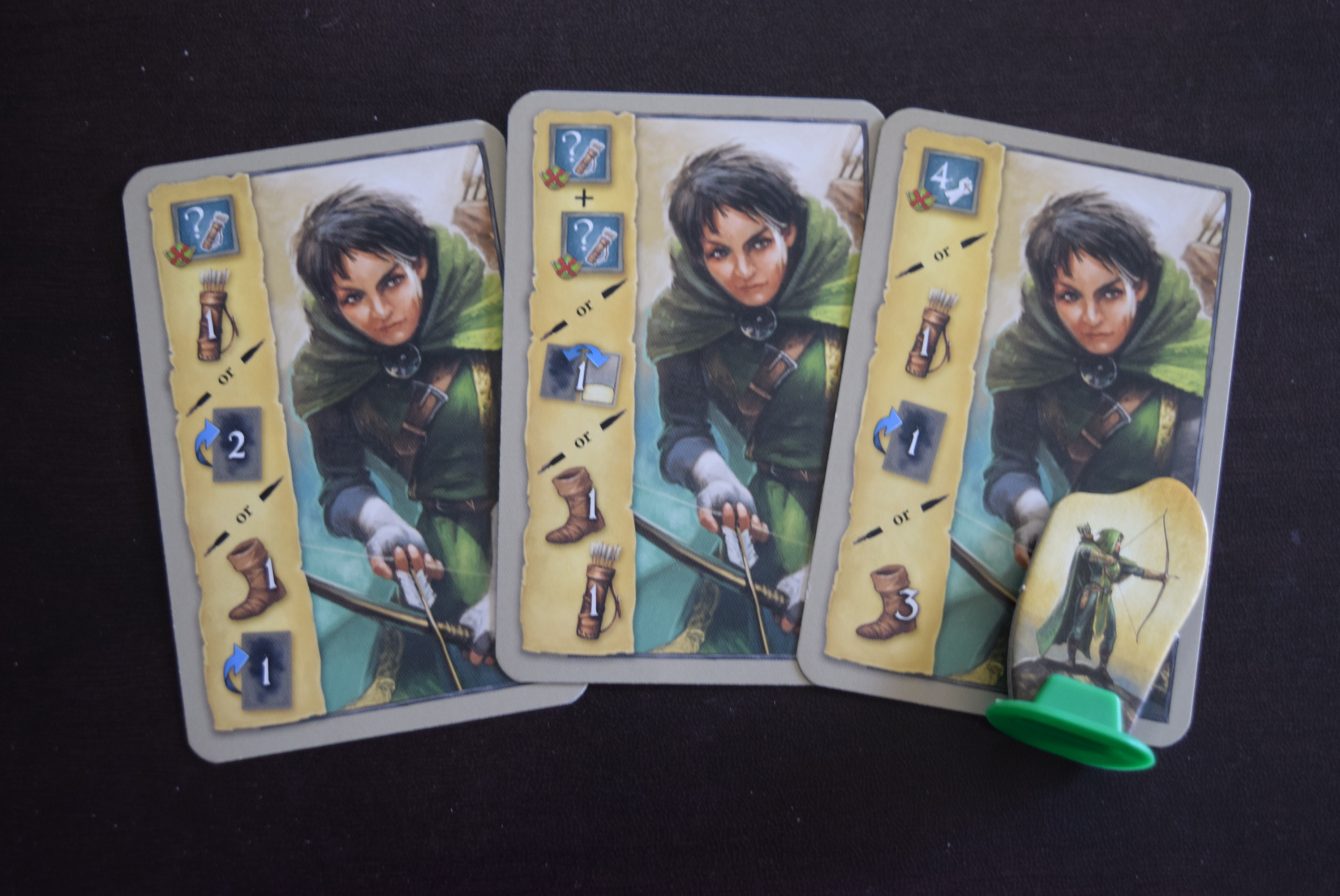 Hero cards are exhausted once they are used and can only be retrieved when a player spends their turn revitalizing, which refreshes all their spent hero cards, but also triggers the turning of a Narrator card.  These cards intensify the situation by adding additional foes to the city and hastening the end of the game, for if you ever need to flip a Narrator card and cannot, then the heroes have run out of time and the city falls. 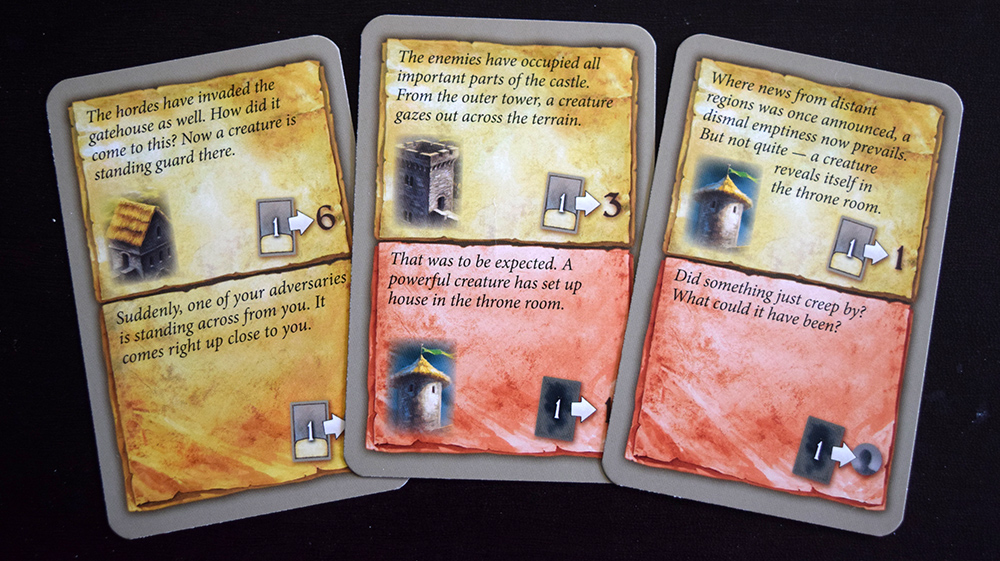 The only way for the heroes to win is for them to battle their way to the bottom of the encounter decks in order to uncover and (hopefully) complete 4 of the 6 task cards set up at the beginning of the game.  These tasks range from having defeated a certain number of specific monsters to handing over treasure and gold, to having cleared particular locations in the city of all threats.  There are 16 task cards in The Liberation of Rietburg and you use a random 6 each game, so there is a surprising variety of end-game goals, making it difficult to cheat the game by guessing what your heroes may need to do to win before the tasks get revealed.

Andrew
Actually, between the 6 heroes, the 16 tasks, and the randomization of the Narrator cards, I think The Liberation of Rietburg has a lot of replayability, aside from the overarching gameplay itself. You’re always going to be moving between the 6 locations fighting monsters, but the particular challenge of any given playthrough will be pretty unique. 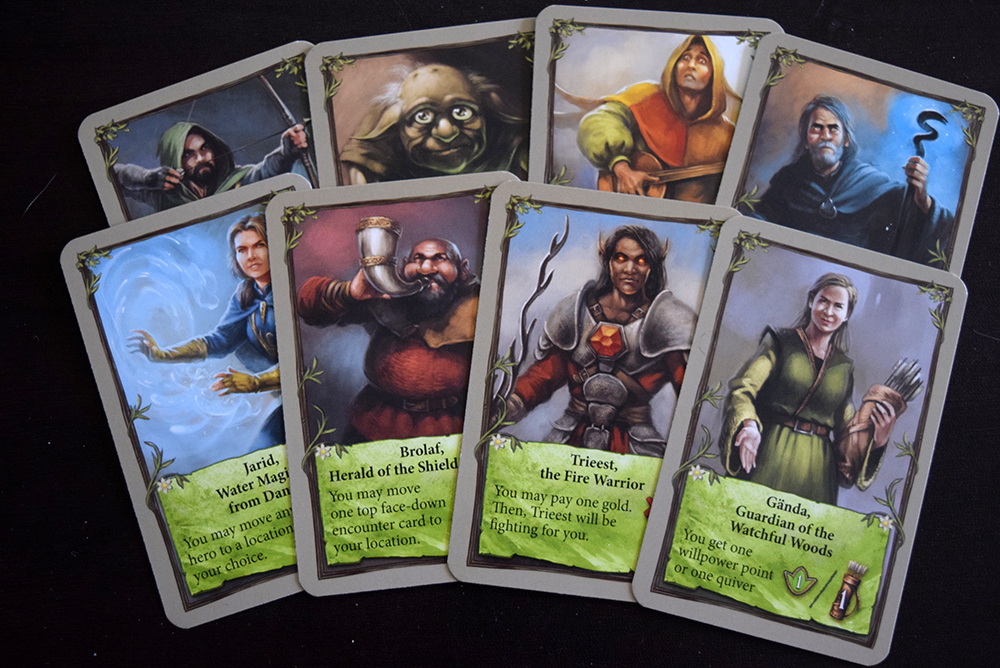 On the whole, we really enjoy The Liberation of Rietburg.  Like so many cooperative games, it’s more a puzzle than anything else – how can we, working together, spend our turns in such a way that we move toward winning the game, all the while trying to stop the game itself from creating an unwinnable situation?  What The Liberation of Rietburg does well is deliver that sort of puzzle in a tight format, and it puts randomness in good places.  Player abilities, for example, are nearly without randomness – you’re not going to get bad luck on the dice and be unable to defeat a monster.  However, what is random is the task cards in play, as well as the distribution of foes, and it can feel incredibly tense when all you need to do is keep a location clear for one more turn but a player needs to refresh their hand and that means flipping a Narrator card that could easily dump monsters on that location.  Encounter cards are placed both face up and face down, meaning that you don’t always even known what sort of enemy you’re facing when you head to a location, and the need to work together to defeat some foes means that you’ll often be tempted to stick together, which of course limits your ability to deal with threats across the city. 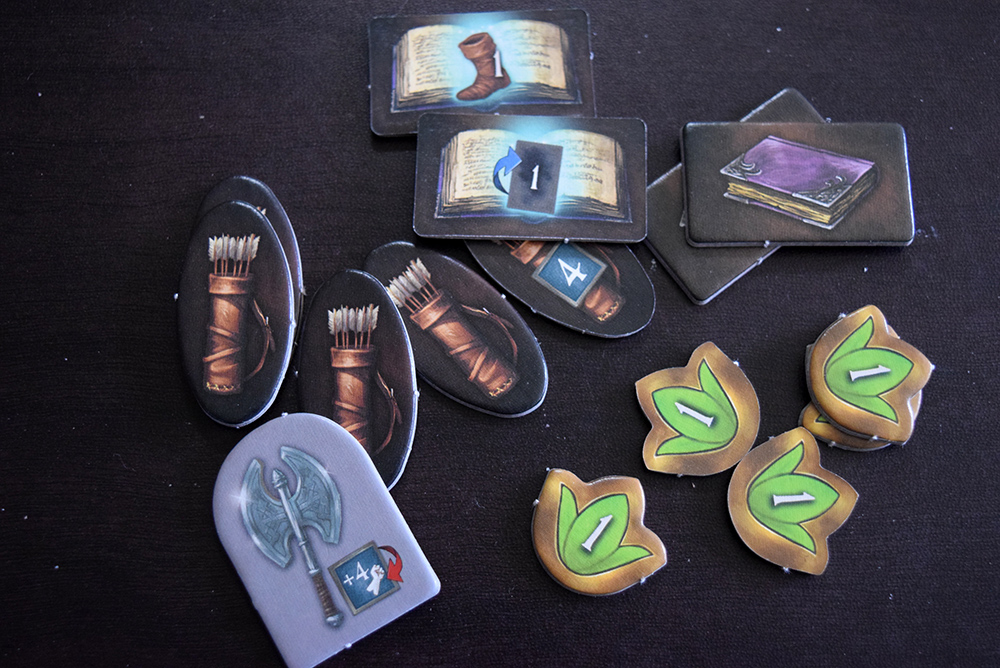 Jess
The Liberation of Rietburg definitely evokes that ‘efficiency puzzle’ feel you get from some cooperative games. Each player’s actions are important, and fitting them together is the heart of the game. I like that, because I like feeling like we’re all contributing towards the group win.

Andrew
Yeah, for sure. And while there are turns where you might not be able to make an optimal move, for the most part The Liberation of Rietburg is tuned tightly enough that you’ll always be doing something, even if it’s just getting yourself into position or gathering some willpower tokens to prep for another, bigger turn. 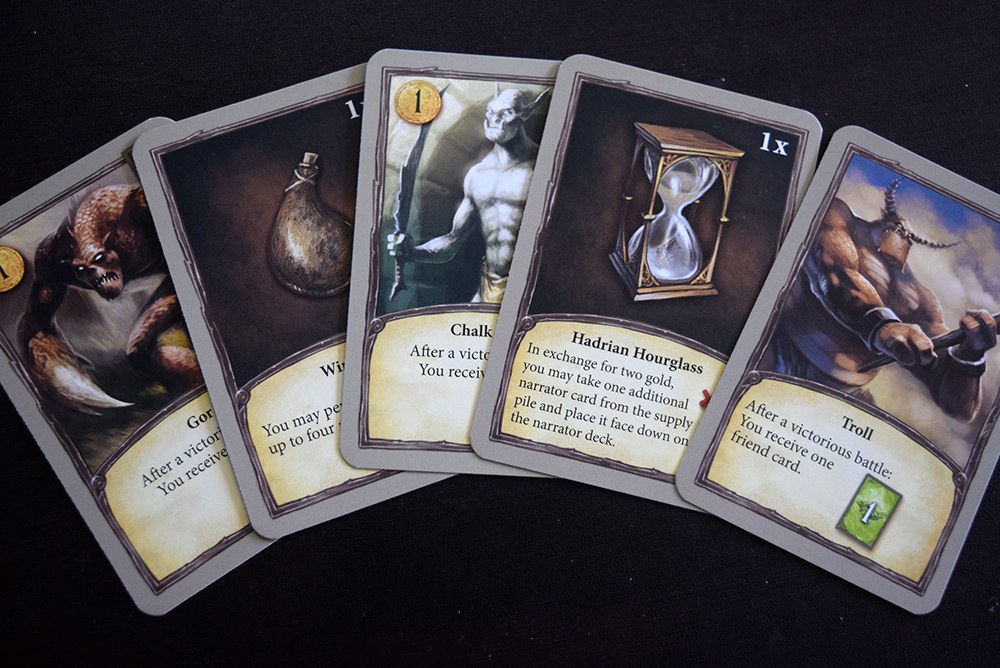 The Liberation of Rietburg isn’t a filler game by any stretch, but its shorter playtime means that we’ve enjoyed playing it when other, lengthier cooperative games simply wouldn’t work.  The simplicity of its mechanics and the limited per-turn decision space keeps things flowing and it’s entirely possible for players to manage multiple heroes simultaneously, should they want to do so (or if you’d like to tackle the city’s defense solo).  While it’s not a replacement for Legends of Andor, we’re sure it was ever intended to be, and The Liberation of Rietburg will absolutely appeal to people who appreciate the sort of cooperative puzzle that it presents in a tight, easy to engage package.