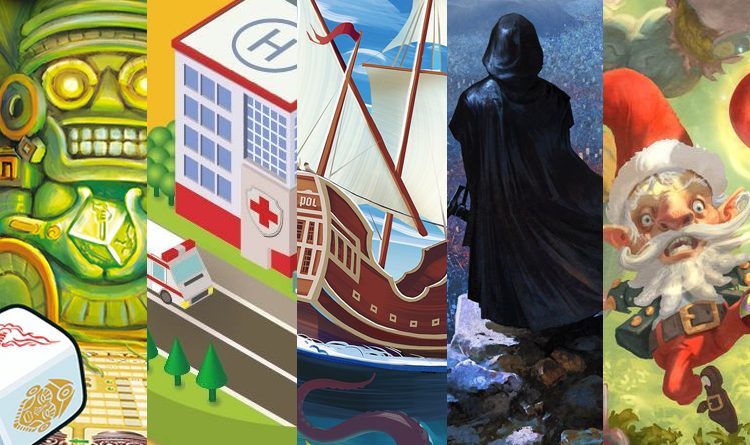 Based on Kristian Amundsen Østby’s Escape: The Curse of the Temple, Escape Roll & Write is a cooperative game that tasks players with collecting gems from the temple before it collapses. During a round, the active player will roll the the dice two at a time; deciding if they will keep them before rolling the next set. If they roll a Black Mask the die is locked and cannot be used for 3 rounds. The dice that are kept are used as a common pool of actions for everyone to use. Those actions will help players explore the temple and, as they do, the players can gain gems and bonus actions. Special chambers require two players to occupy chambers of the same color in a round to gain two gems at once so coordination is key. 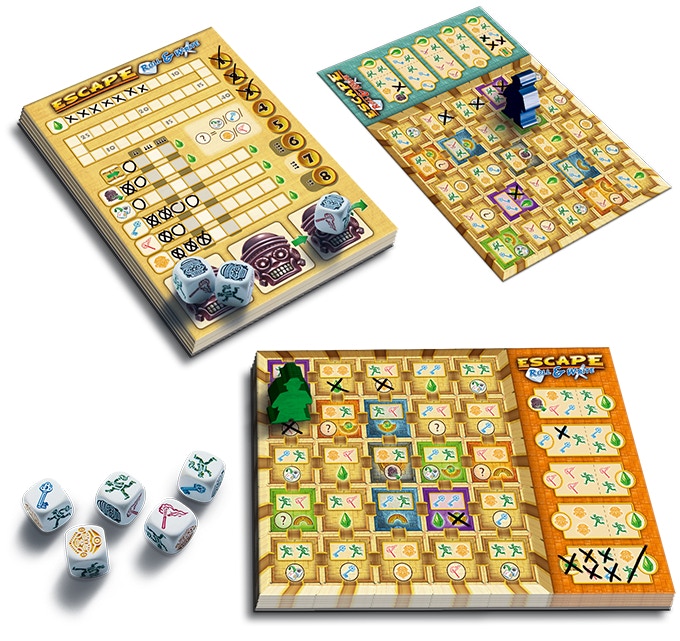 Escape Roll & Write looks like a fun and portable distillation of the original Escape game. As a bonus Queen Games is offering packages of Eascape: The Curse of the Temple expansions and big box as well as add-ons of some of their other games. Learn more about Escape Roll & Write here on Kickstarter.

I haven’t seen a game about veterinarians, so I was intrigued when I stumbled across Puppy Care. The goal of the game is to treat as many sick puppies as you can. During the game you will have a hand of puppies with various ailments and it is up to you to secure the treatments they need by placing them on the “Diagnostic Direction” cards. The treatment cards are laid out in a grid and the Diagnostic Direction card shows you which row or column you can send your sick pup to. You’ll be able to pick up equipment cards that can which can affect the direction cards, your hand of pups, and other actions. 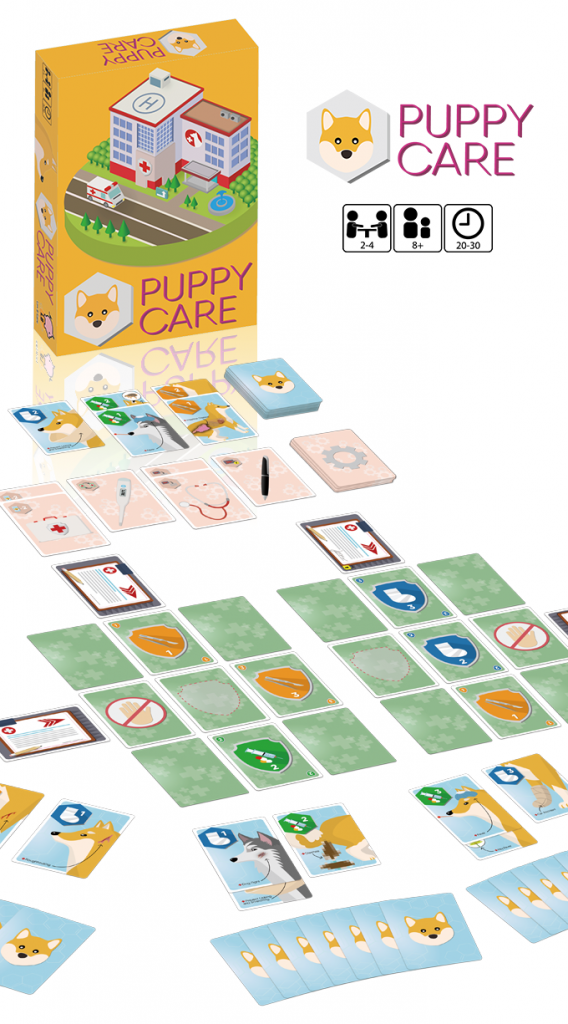 I think this game could be a fun one for people who enjoy spatial puzzles or love taking care of animals. It’s art might be a tinesy bit upsetting if you don’t want to see puppers with boo boos or pooping pixelated diarrhea, but if that doesn’t bother you then check out Puppy Care on Kickstarter here.

There is a bounty of treasure in the Sea of Nadia and you’re about to go find it. In Sea of Nadia the players have taken on the roles of brave captains travelling around the sea collecting treasure, working alongside and occasionally messing with other captains, and improving their captainly powers. Each turn 1 player will roll the dice and assign them to the players. The dice tell you how many actions you will have and if any additional effects will trigger on your turn. Then players will move their ships around the board collecting resources and trying to open treasure chests. The first player to open 7 chests wins. 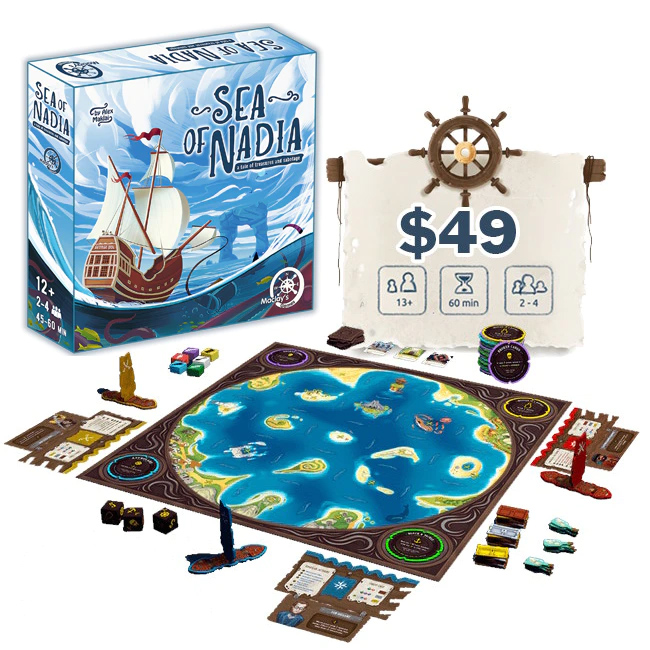 The neat thing about this game is that it uses integrated Augmented Reality tutorials . All you need to do is download the app and scan any part of the game and you’ll get a video tutorial and examples to help you navigate playing. This is a super cool element that may help speed up gameplay and I can’t wait to see how it works. Sea of Nadia looks light, engaging, and designed to help you dive right in. Discover more about the game here on Kickstarter.

In A War of Whispers players seek to influence a war from the shadows. As leaders of a secret society you use intrigue to shift loyalties and claim cities for themselves. This Kickstarter presents the collector edition and a new expansion. The Dark Alliances expansion adds powerful new cards that start the game mixed into the main deck and allow you to ally with other players. The Collector’s Edition includes new Treasure and Conquest  cards and over 175 minis, tokens, buildings, and other upgraded components.

if you love area influence games packed with spies and shady politics then this Kickstarter is perfect for you. The Collectors Edition looks like a nice upgrade to the original game and the expansion sounds like it adds even more machinations for the players to delve into. Check out A War of Whispers here on Kickstarter.

Great gardening wizards! Yes, in Gnome Elf Troll, players take on the roles of wizards, trying to grow magic beans, enchanted apples and cursed pumpkins. To help out with all the gardening, wizards can hire gnomes, elves and trolls. These magical beings can havest produce or mess with their opponent’s gardens.The first player to harvest 10 crops of the same type wins the game. 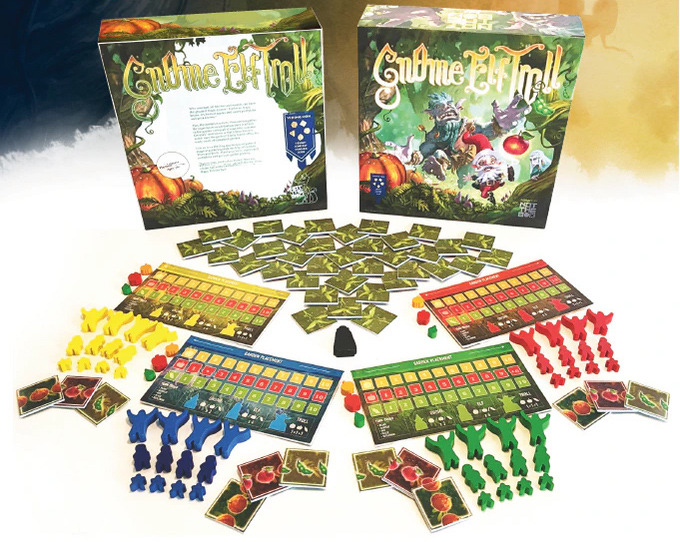