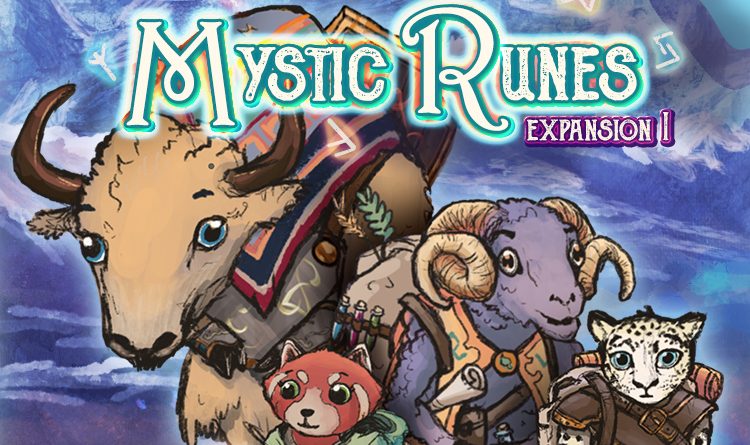 Squire for Hire: Mystic Runes takes everything we enjoyed about the original and adds just a little bit of magic (and the ability to play with 3-4 when combined with the original), keeping this awesome microgame easy to keep playing.

We recently did a Game in a Minute feature on Squire for Hire, and for those who can’t spare the 60 seconds to watch it I will summarize here by saying that it’s a light, fun, super-portable little puzzle of a microgame that we’ve really enjoyed.  It’s not every game that sings the song of the unsung heroes of every fantasy adventure – the people in charge of organizing and carrying the hero’s bags!  We loved the art and found its modest card count belied a game that delivered a delicious bite of gameplay. 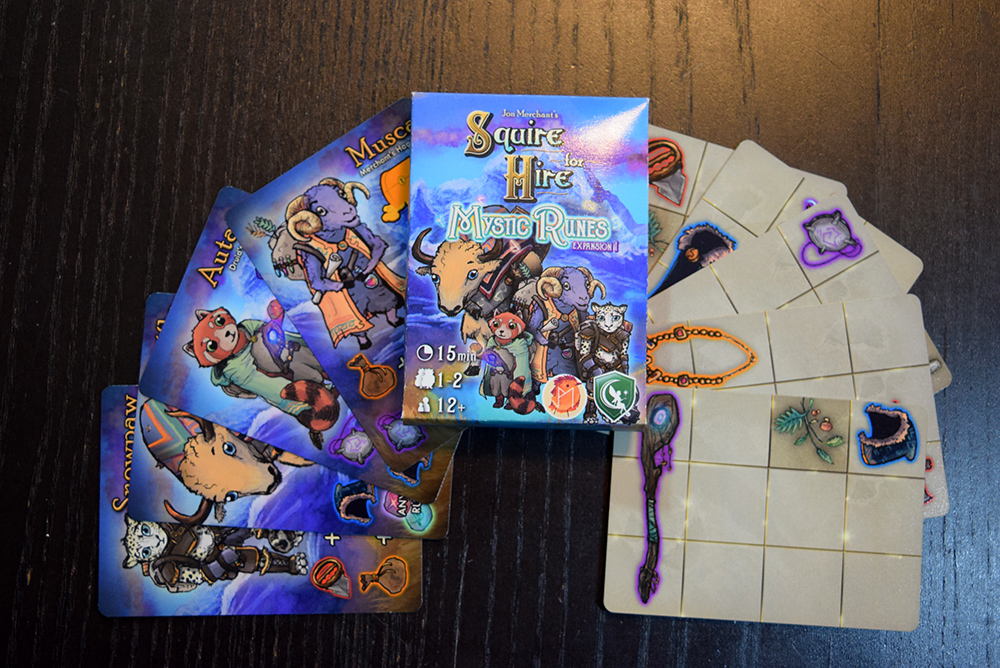 Since then, publisher Letiman Games has successfully Kickstarted Squire for Hire: Mystic Runes, a standalone sequel/expansion (expandalone?) to the original Squire for hire.  Coming in at under 20 cards, what good things come in this new, small package?  Let’s take a look!

We got a pre-production copy of Squire for Hire: Mystic Runes for our consideration and possible review.  We weren’t otherwise compensated.

Jess
I’ve got to say, I was really excited to see Squire for Hire: Mystic Runes, but I was also a little surprised – the original seemed like such a complete thought!

Andrew
Agreed on both counts. But let’s cover the basics before we go into the differences.
In Squire for Hire: Mystic Runes  (just as the original), each player will be a titular Squire, responsible for stowing the gains of their adventuresome companions and ensuring that the right gear is always on hand when it’s needed.

Each turn, the active Squire will attempt to overcome the current challenge, either by having enough of the requisite items on-hand (visible in their bag), or by ‘spending’ some gear (which means taking a new card and covering up the indicated items).  Challenges are either Quests, Encounters, or Dungeons, and completing them will earn you more goods to stow in your ever-growing pack of stuff.  At the end of the game, the Squire who has managed to amass the biggest pile of treasures (while covering up the junk) will have the most points and win! 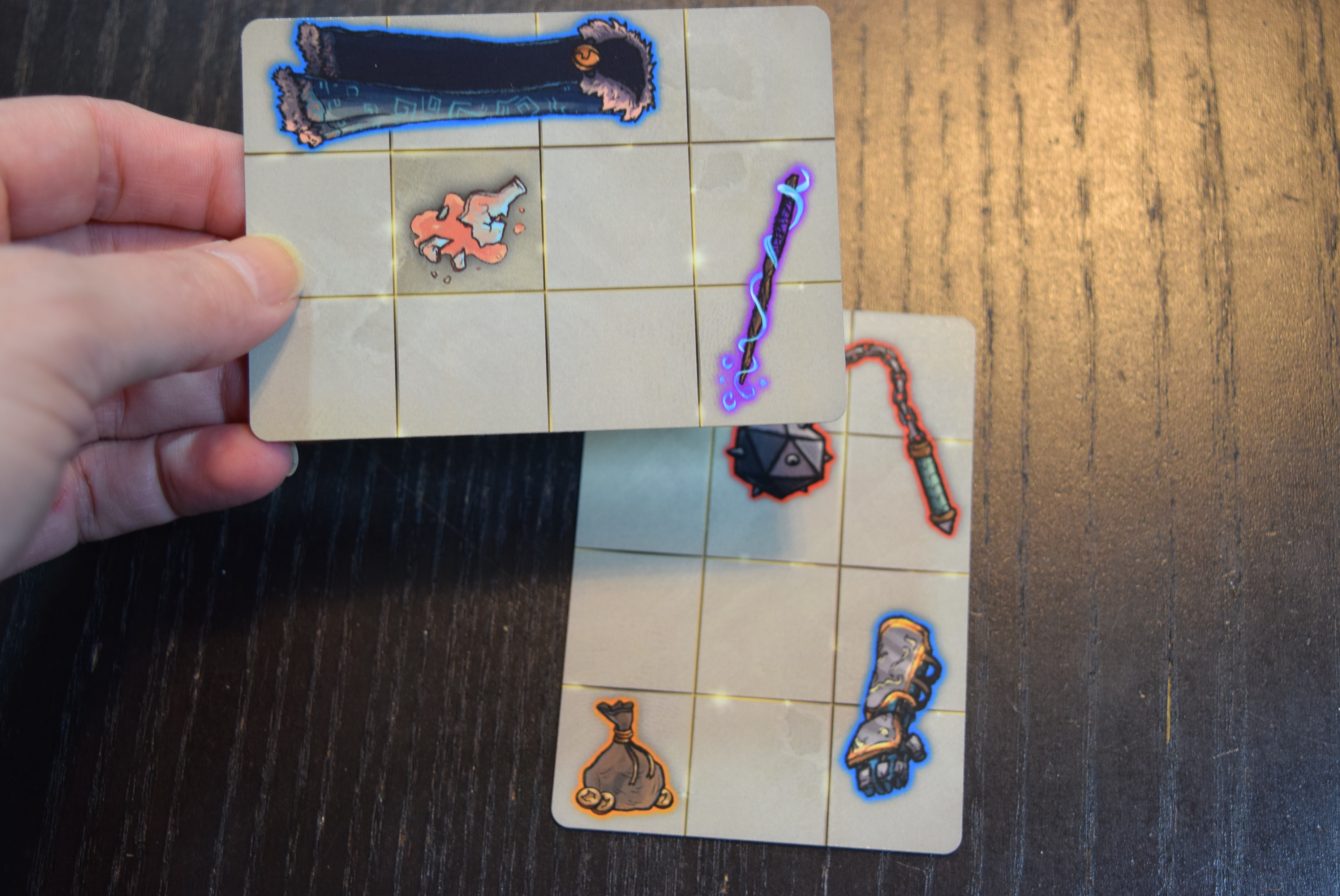 What Squire for Hire: Mystic Runes brings that’s new compared to the original are some new Squires and the inclusion of runes.  The new Squires, much like the original game, have different scoring affinities and each one has a unique player power that will help you form your strategy.  But where things get really interesting are the runes. 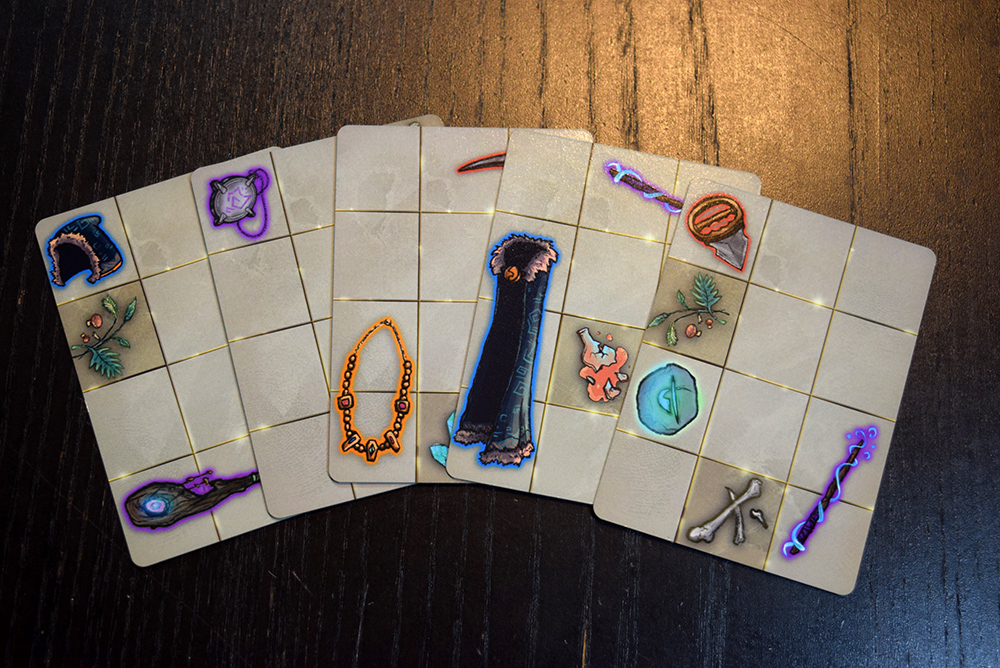 Each of the three different kinds of runes can show up in the hauls of treasure you will be collecting, and all three have a unique function (in addition to being worth a point apiece at the end of the game):

Andrew
So there you’ve got it – Squire for Hire: Mystic Runes doesn’t reinvent the original, and in no way did it have to. What remains still works great, but the little addition of the runes adds some sparkle to an already fun little game.

Jess
For sure! And I enjoy the new Squires, too. Squire for Hire: Mystic Runes still has great art, and nowhere is it cuter than Gruffle, who wants so badly to help you carry your stuff! 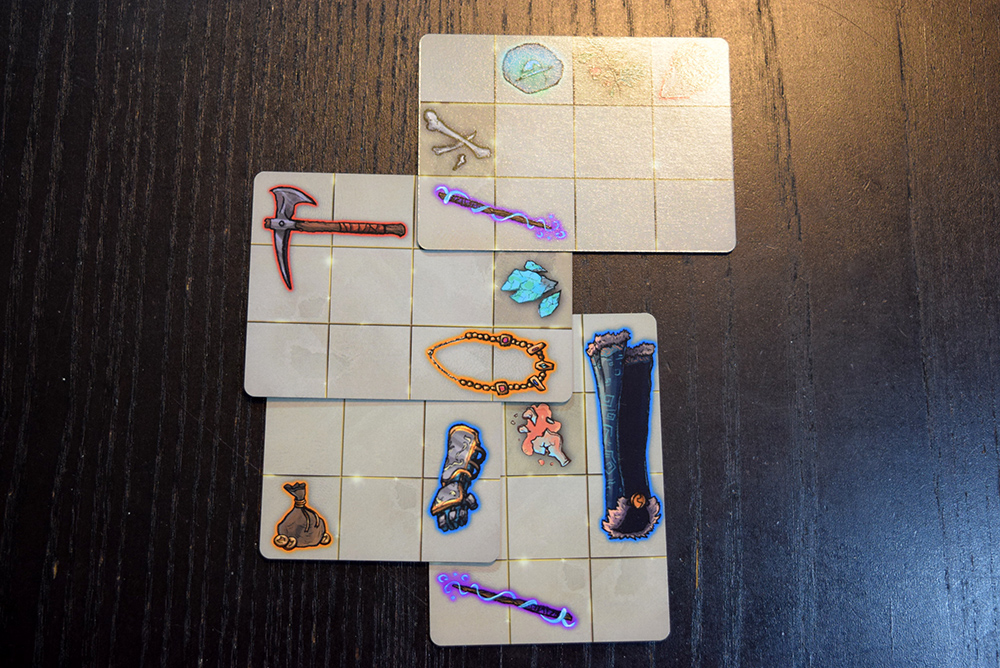 Jess
Which is really fitting, since, you know, Squire for Hire: Mystic Runes is all about packing efficiently!

You can order Squire for Hire: Mystic Runes, the original, and the Squire Pack directly from Letiman Games!