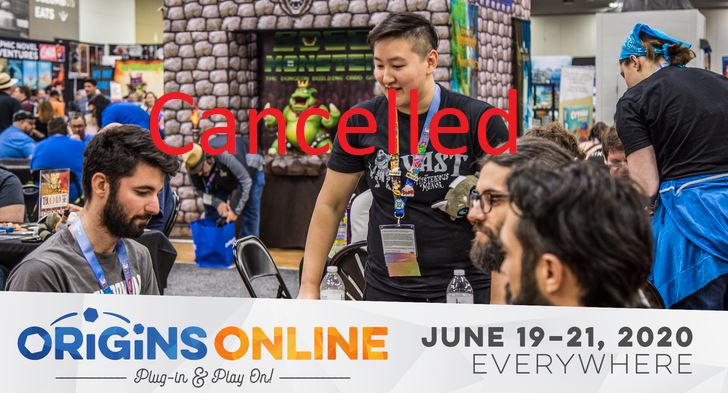 Amidst the mounting outcry from prominent voices in the tabletop community for their lack of any statement on #BlackLivesMatter, the Game Manufacturers Association (GAMA) has moved to cancel its Origins Online convention, a digital adaptation of the annual Origins convention, which has been postponed due to the ongoing pandemic.

For the last several days, individuals associated with the event, as well as prospective attendees, have been voicing an increasing concern that the board of GAMA had not yet issued any statements relating to BLM or the ongoing struggle of civil rights activists across the country and the globe.  Industry voices, such as Eric Lang, Gil Hova, Elizabeth Hargrave, and a host of others who were set to appear in and be involved with the event withdrew their support for it in a display of solidarity with Black creators, designers, publishers, and gamers.

Elizabeth Hargrave had been assembling a list of people/organizations which had withdrawn from the event.

This mass exodus grew to encompass not only individuals but also advertisers, exhibitors, publishers, and sponsors.  Despite this, and despite direct calls for them to make a statement on behalf of the organization, the GAMA board remained conspicuously silent.

Finally, at midnight on Thursday, 6/11, GAMA issued a statement on its Facebook page, formally cancelling Origins Online, pledging to match donations made to BLM charities, offering full refunds to all attendees, vendors, and sponsors, and finally actually saying the phrase ‘Black Lives Matter’.  Here is their full statement:

While this statement finally articulates the GAMA board’s position, it doesn’t explain why it took the board so long to do so and already, outspoken voices on Twitter are expressing frustration that this statement only came about after the massive walk-out that preceded it, casting unavoidable doubt as to the motivation of the cancellation and the statement which announced it.