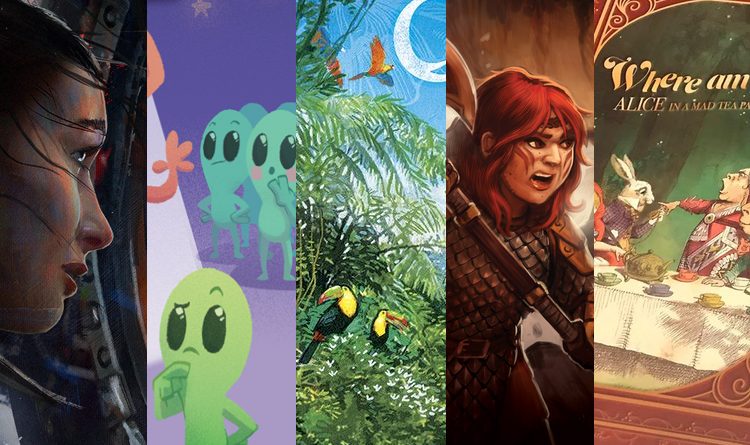 In Intrepid players take on the roles of astronauts from different nations on the International Space Station and things have gone terribly, terribly wrong. Working together in this asymmetric game of survival, the players will need to satisfy enough emergency repair cards to save the station. By rolling and manipulating their dice players can gather the resources they need to thwart the ever growing pile of problems the station faces. 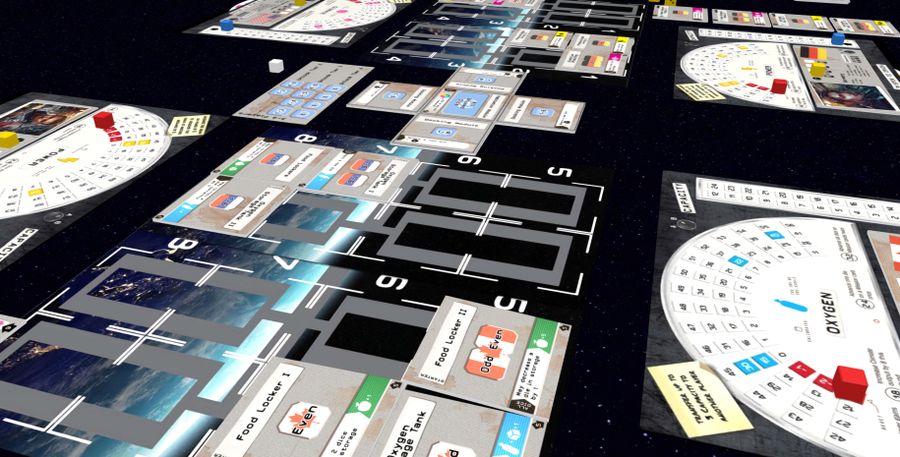 Intrepid has some very interesting and cleverly designed parts like the resource board’s movable dial that keeps track of the drain on the systems. I also like that each astronaut has different skills and technology of varying complexity which allows players to adjust the level of challenge they want to face. Intrepid looks like a fantastic addition to the cooperative survival genre. Intrepid

While Intrepid has no aliens in the game, French Toast is, strangely enough, all about aliens. Aliens have visited Earth and the first thing they saw was French Toast. Now they compare everything to that delicious breakfast meal. In French Toast, the Toastmaster (or lead player) must get the other players to guess a secret word. As a  “Hot and Cold” style game, players will make guesses as to what the word might be. The Toastmaster can either say French Toast if they thing the guess is not like the word or repeat the guess if they think it is closer to the word. The Toastmaster will also be able to draw Hint cards that they can place on a Hint scale to indicate how well the card describes the secret word; giving the players additional information to help them guess. 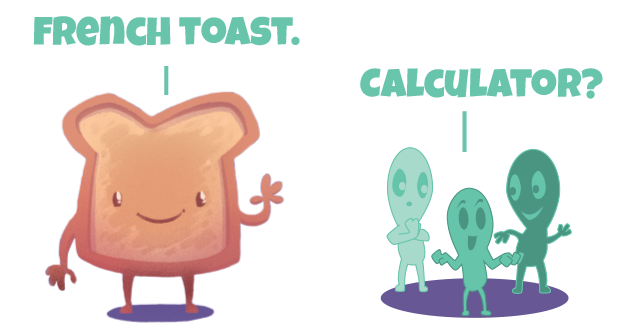 French Toast is a light, family-friendly party game whose fun theme is bound to appeal to a wide variety of players. See how you fit on the French Toast scale by visiting the campaign on Kickstarter here.

Canopy is a 2 player tableau-building game where everyone is trying to create the best rain forest. Each turn you will draft a column from the display and collect whatever Plants, Trees, Wildlife and Weather cards are there. Any columns you skip over will have cards added to them, making those columns more appealing to your opponents. Plants give you set collection points while trees gain points for their height and animals give you abilities to help you. There is an element of push-your-luck mechanics in that threat cards (fire, disease and drought), which can damage your forest, are mixed into the deck. 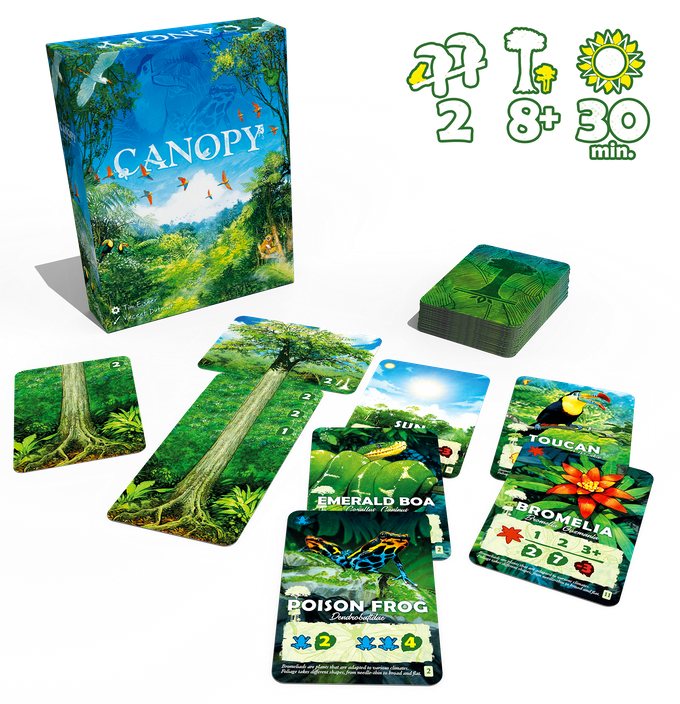 With its’ gorgeous illustrations by Vincent Dutrait and simple yet strategic gameplay, Canopy looks like a sure winner for me. Grow your interest in Canopy here on Kickstarter.

Roll Player is a fantastic board game about creating characters for roleplaying. Now Thunderworks Games is expanding on the idea with Roll Player Adventures; a cooperative storytelling board game. In the game players will explore the realm of Ulos and discover monstrous enemies, make new allies, and perhaps even change the world. The game comes with 12 storybooks and the choices you make will affect how the story progresses so you’ll need to make your decisions carefully. 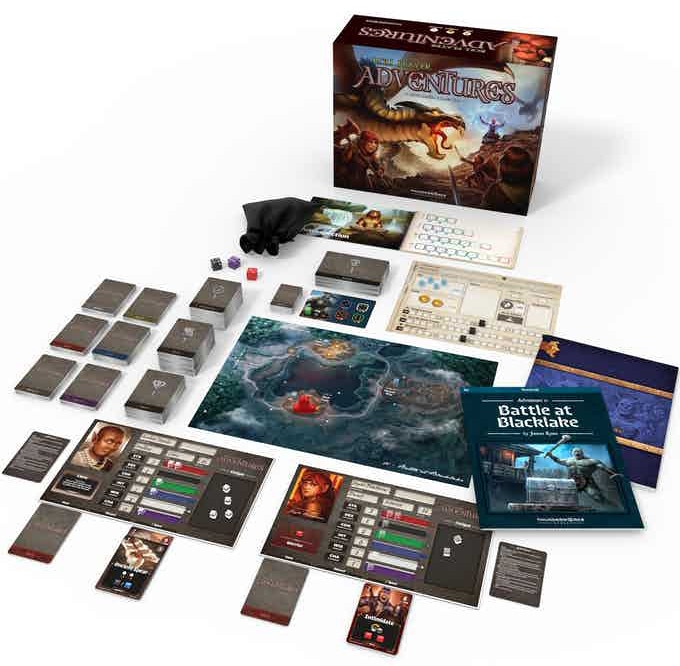 One of the neat things about Roll Player Adventures is that you can use characters from  Roll Player or any of its expansions. The game is a stand alone, but I like that it gives you a place to explore the stories of your favorite characters. You can learn more about this latest installment in the Roll Player line here on Kickstarter.

Where am I ? ～Alice in a Mad Teaparty～

Can you imagine a game that comes with a tiny ceramic tea set as part of the components? Wouldn’t it be delightful? Well GOTTANI Co sure thought so. Their upcoming game Where am I ? ～Alice in a Mad Teaparty～ is a social deduction game with adorable components to give you that mad tea party feel. In the game you must try to deduce the identity of each player while trying to get the best seat at the table. Each seat at the table is worth a number of points depending on what is on the table in front of it. During your turn you can take 1 action to either place an item on the table, seat any character in an open chair, or send a secret letter to another player to try to guess their identity.  Once all characters are seated, the players check to see if their identities were guessed and points will be distributed accordingly. After a number of rounds based on the player count, to points are totaled and the player with the most wins. 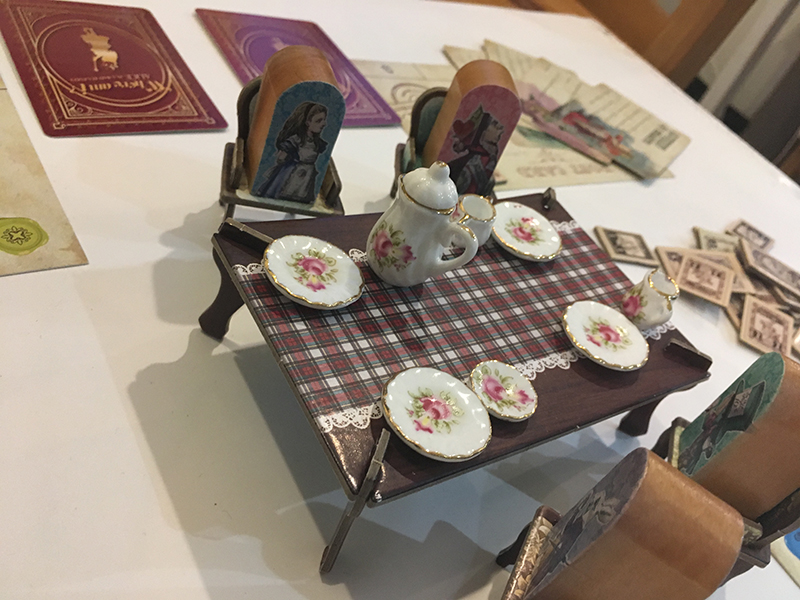 Where am I ? ～Alice in a Mad Teaparty～ looks chaotic and fun, just like the tea party in Alice’s Adventures in Wonderland. I am enamored with the components and I kinda love that the publisher said “Honestly just using the game as a little doll house accessory pack might even be a valid good use of it.” Learn more about this enchanting little game here on Kickstarter.