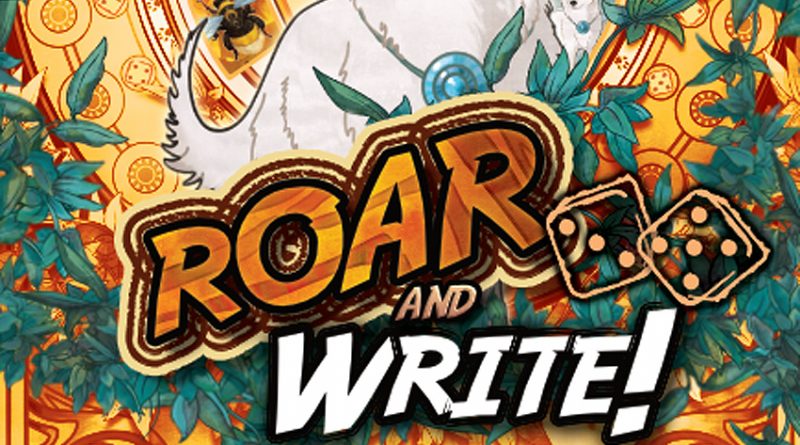 
Roar and Write is a new roll & write game from Galactic Raptor Games and a spiritual successor to the absolutely fantastic and completely gorgeous Animal Kingdoms.  While the original was a great hand management/area majority game, Roar and Write trades in the cards for dice and gives each player their own kingdom scorepad to keep track of.  The goal is still the same – be the player with the most points at the end to win the game and be named the new ruler, but can Roar and Write keep up with its predecessor?  Let’s find out! 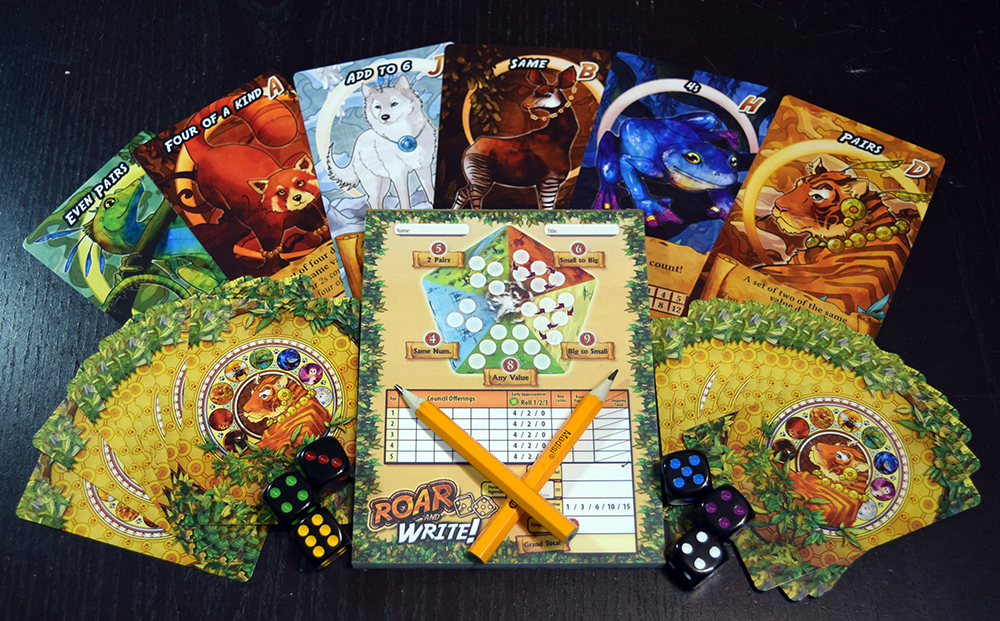 We got a prototype of Roar and Write for this article, with the option to request a finished copy of the game.  We weren’t otherwise compensated.

Jess
So right up front, I just want to say I love the idea of Roar and Write. Roll & writes can be really fun, and the original Animal Kingdoms was such a good game, I was super excited to see it getting the R&W treatment!

Andrew
Me too! My biggest question was how the mechanics of the original would translate to this form, or if it would branch off in a new direction. 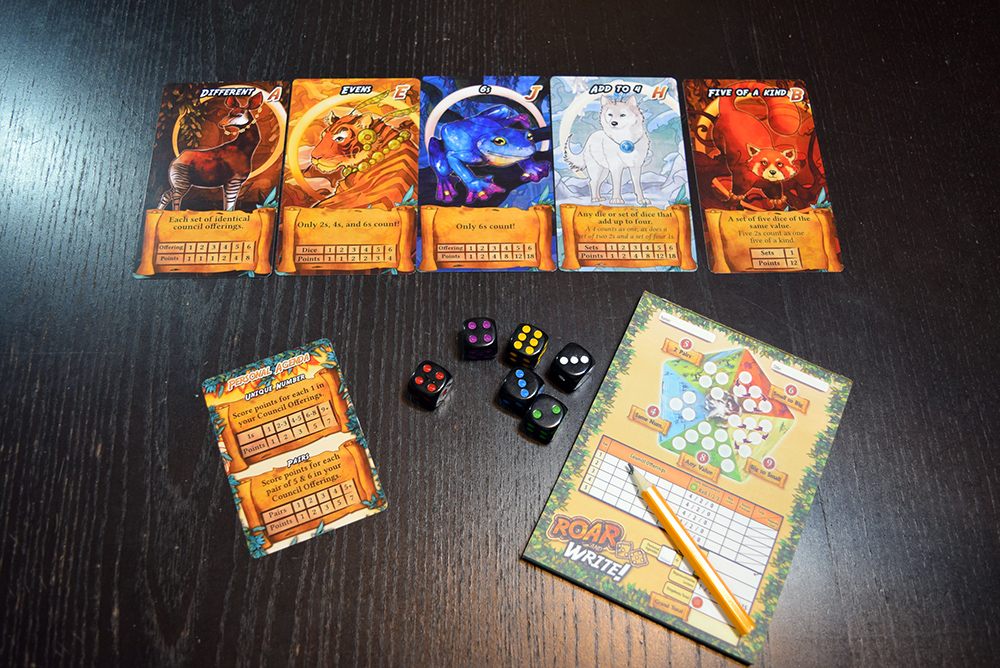 Well, to answer the question, let’s get into the mechanics of Roar and Write.  Each player starts with their own kingdom sheet, where they will track their efforts to gain favor in the council.  Each game, a different selection of 5 different council representative cards, each one displaying a unique scoring mechanism. 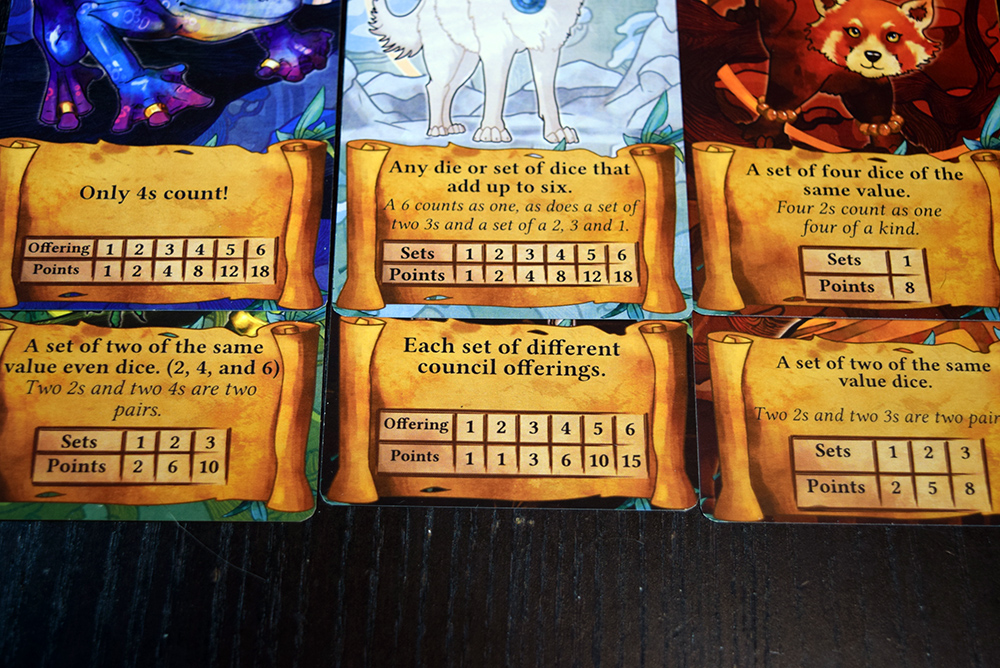 Then, players get to rolling.  One player will roll all 6 dice and then each player separately decides how to use this shared dice pool to influence the council or grow their kingdom (more on that in a sec), choosing to record anywhere from 0 to 6 of the current roll into their sheet for that Age (round).  The dice rolling process is repeated 2 more times, after which players will have (probably) added 6 values to their Sheet. 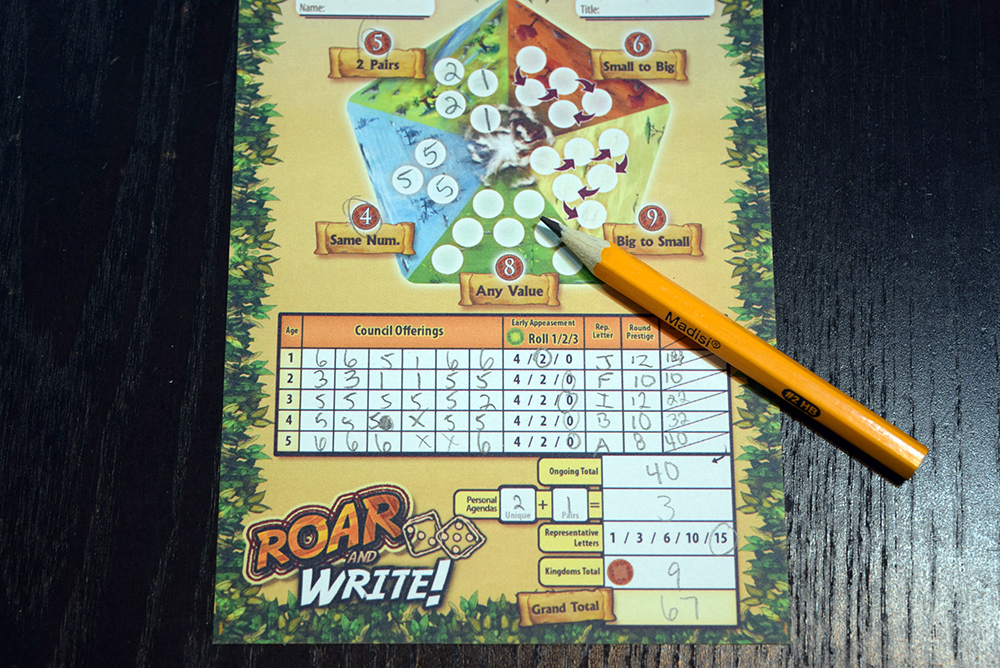 Jess
With 3 rolls per Age, Roar and Write does have a bit of a press-your-luck thing going on. You all share the same dice, but deciding which to record is always the question.

Andrew
Exactly – for each roll, you’re deciding whether you’ll get what you need to score with the Council, or whether you should hold off to commit until a later roll.

Jess
Right! And while it’s always tempting to let things ride in the hopes of getting that perfect set of numbers, any blanks are lost opportunities to score. And you also get bonus points for recording all 6 numbers before the final roll of the current Age!

Aside from the council representatives, there are a few other ways to score in Roar and Write.  First of all, the miniature kingdom map at the top provides 5 more set collection mechanics, as each segment can be filled in using dice not assigned to council.  You also score bonuses for working with a diverse set of council reps over the course of the game, as well as individual hidden personal agendas which are dealt out at the start of the game. 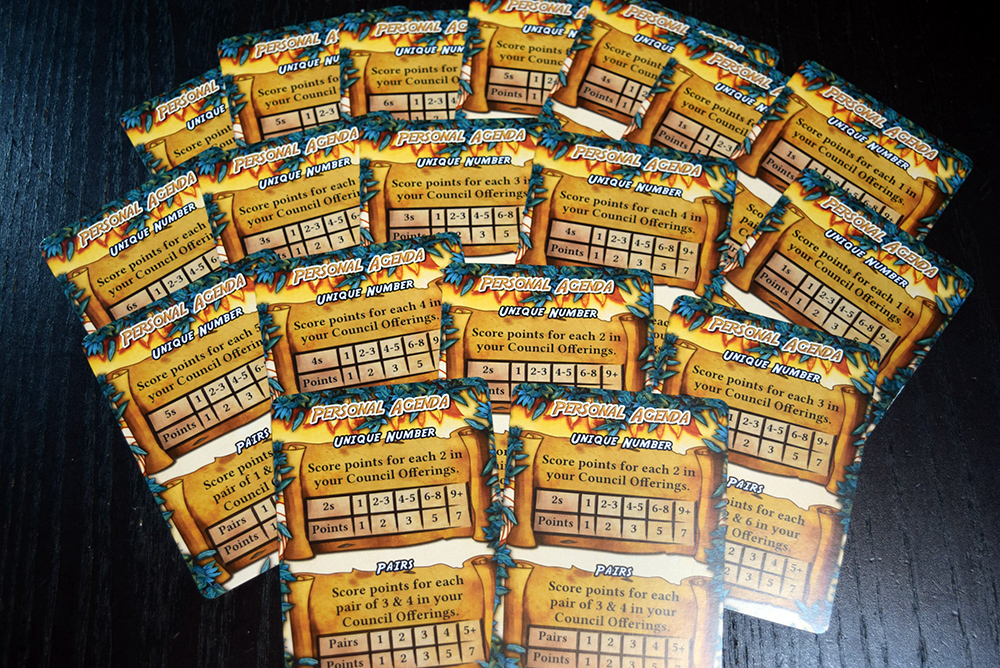 After 5 Ages, players will reveal their hidden agendas, add up their points, score their bonuses, and a winner declared!

Andrew
So, overall thoughts on Roar and Write?

Jess
I liked a lot about Roar and Write! I love roll & write games, and I really enjoy ones that give you a bunch of ways of scoring points. I also love games where everyone participates on every roll, and Roar and Write has basically zero down-time. 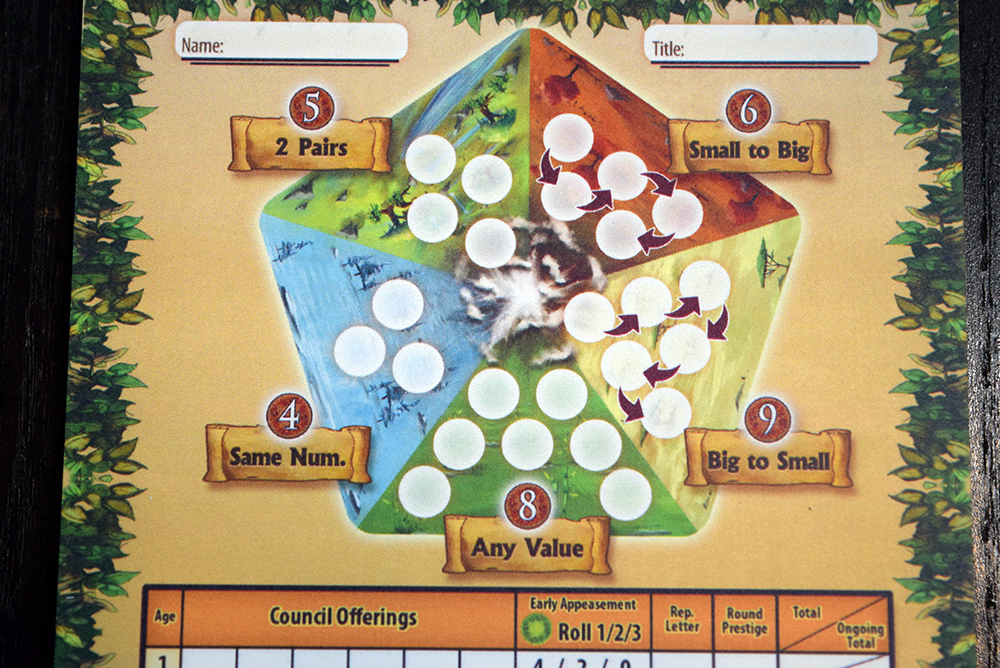 Andrew
Agreed. My favorite part of Roar and Write is that there is almost always a way to use any given roll, so very few turns ever feel completely wasted. On the contrary – you’ve got your eye on 3 or 4 different ways of scoring at the same time, so you’ll always be sorely tempted by that push-your-luck aspect to try and wait for exactly the right roll, and hopefully you get it before the Age is over.

Jess
On the other hand, one of the things I love most about it, the shared dice pool that lets everyone play simultaneously, can sometimes make for oddly limited options. By which I mean between the shared dice and the shared council members, there are times when the ‘best’ use of the dice is very clear for all players, and there isn’t much decision-making. That’s a bit of a bummer.

To illustrate the point, If there is a council rep who wants, say, 4 of a kind in order to score, and your first roll of the age looks something like this… 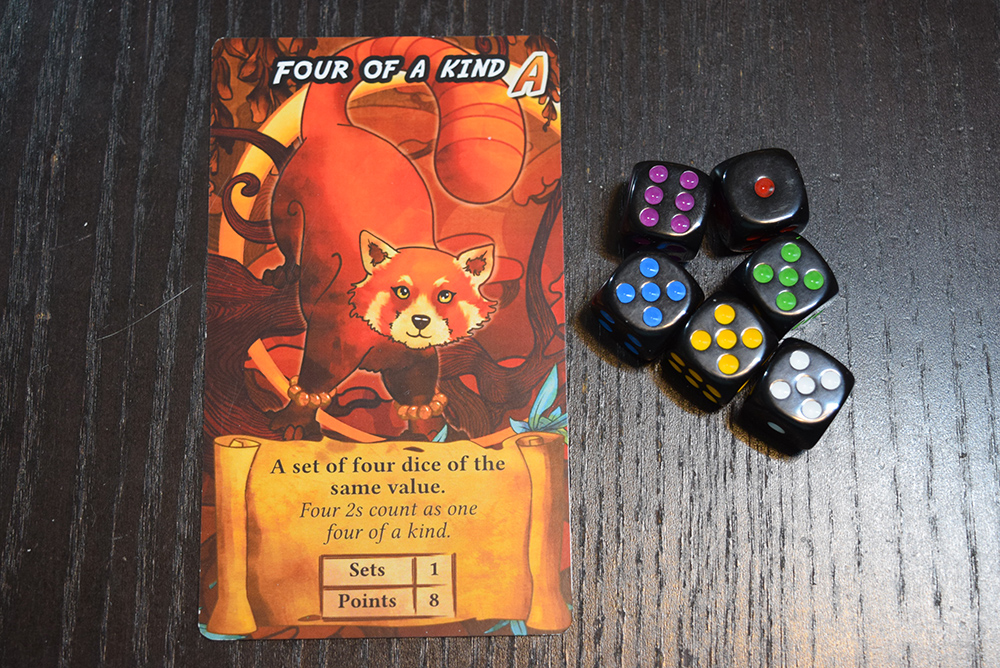 Well, that pretty much decides how everyone at the table will play for that roll.  This, of course, is a natural consequence of having shared dice and scoring mechanisms, but it would be eased a bit if the hidden, personal scoring goals were a little more valuable, because then you might be tempted away from the obvious point gain of satisfying the council.  But generally speaking, there is little to deter this effect, and in our experience, a lot of ages went by with our scores being nearly identical because which dice to take and how best to score them were simply pretty obvious.

Andrew
Those quibbles aside, I definitely enjoyed our plays of Roar and Write. I think it’s a really fun little game, and manages to capture some of the great bits of Animal Kingdoms while delivering its gameplay in really fast, really accessible bites.

Jess
I felt the same way! You’re not competing with other players in the same way, but it does still have some of the same core feel, and I enjoyed it on its own merits, too! It doesn’t hurt that it’s so darn pretty, either!
We were (and are) huge fans of Animal Kingdoms, so Roar and Write did have some pretty big pawprints to fill.  Though it might not meet the excellently-machined mechanisms of its progenitor, it stands on its own, bringing tight, quick gameplay in a perfectly portable package that’s a blast to break out anytime you’re looking for a little dice-chucking action!


You can check out the Kickstarter here.