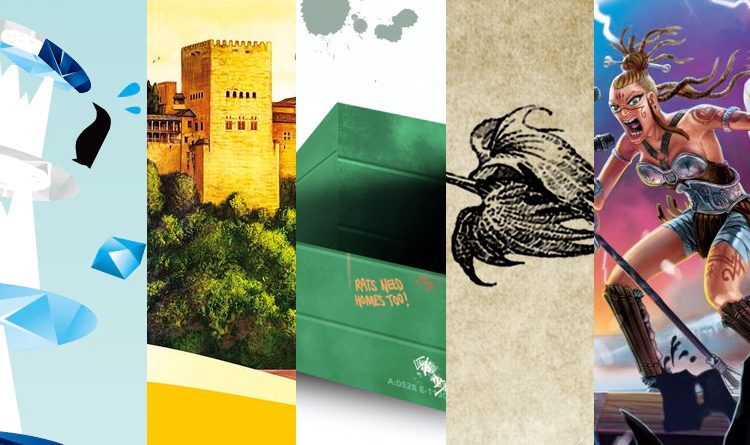 Jess
It’s Friday afternoon. I’ve got my tea and I am ready to peruse some Kickstarters! Let’s see what’s popped up.

Yura Yura Penguin is a dexterity stacking game where players seek to be the first to play all of the cards in their hand without knocking over the iceberg. On your turn you must follow the directions of the previously played card, adding icebergs, penguins, and ice pieces, before playing your own card. When you only have 1 card left you shout “Penguin!”. Play your last card safely and you win. You lose if you knock the iceberg over and the player with the least amount of cards then becomes the winner.

The game looks light enough for the entire family to enjoy while still being challenging enough for a hilarious game night between friends. I imagine there will be tons of penguin flying fun as icebergs topple due to precariously placed cards. Learn more about this charming balance game on the Yura Yura Penguin Kickstarter page here.

Alhambra is a fun city-building game of card drafting and set collection, where players construct buildings in their Alhambra (fortress complex). Alhambra Roll & Write intends to give the same experience, but this time with dice (not to be confused with Alhambra: The Dice Game). During the game players will roll a set of blue and yellow dice three times and mark off the building where the two results meet on the grid. If you roll results that have already been marked off, you can take one coin for each crossed out building. The coins you collect can be used to reroll dice so they’ll help you get those   As buildings are marked off they will also be recorded on a separate sheet that shows everyone’s progress and at the end of the game players will gain points for having the most of each building type as well as completed rows and columns. 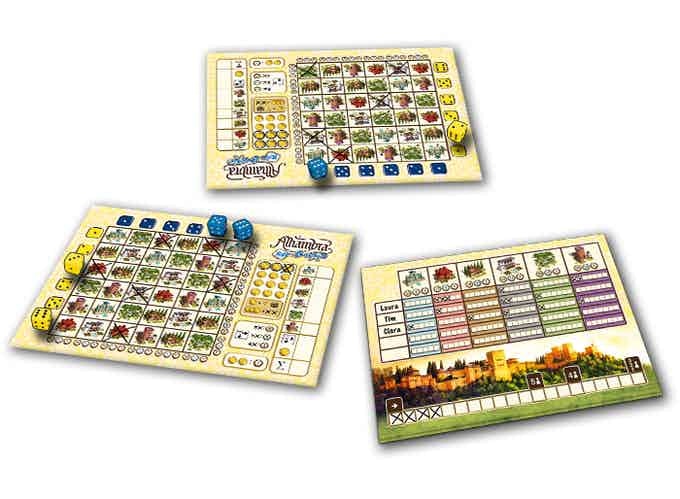 Andrew and I love to watch cooking competition shows and Recipe for Disaster looks to capture the energy and fun of those tasty tournaments. In the game players will be gathering ingredients and trying to perfect their dish before its time to present. You can get ingredients by visiting the market, which lets you trade 2 cards for 1 in the offer, drawing a random card from the Fridge deck and discarding 1 card to the dumpster, or grabbing what you can from the dumpster within 10 seconds. If you do dumpster dive, you have to roll the health inspector die and might pick up a strike card which can negate good reviews. Once a player thinks their dish is done or if the “Time is up” card is drawn, everyone must present their hand to see how well they created their dish. Players will hand out review tokens and adding up your review points and points you gain from matching ingredients to your dish you’ll score your creation. The player with the most points wins. 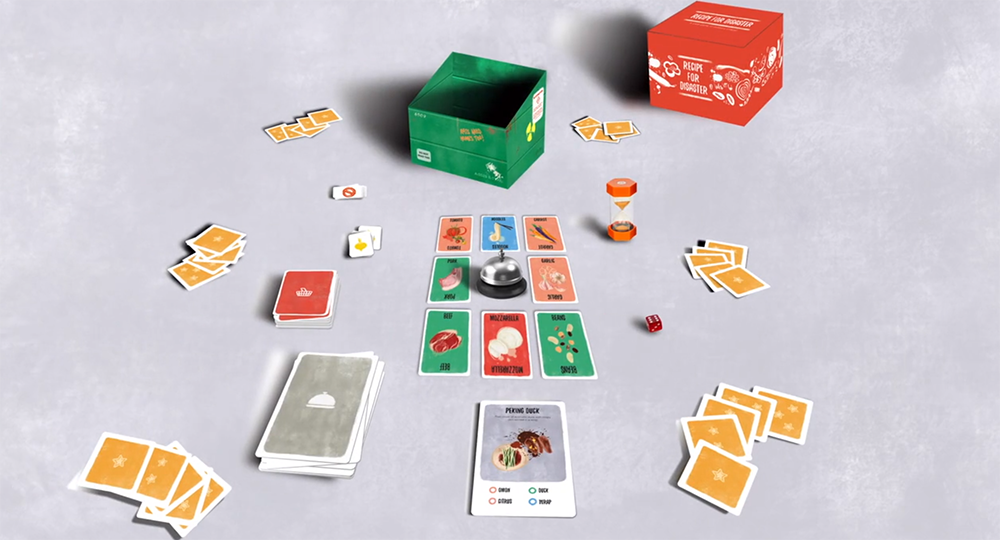 Recipe for Disaster looks like a fun, party-style game. I like that if you can’t manage to get all the perfect ingredients for your dish, you can still make an argument for why you think it would be delicious and try to convince your friends to give you high reviews, but the game doesn’t solely rely on making those arguments. I sometimes have a hard time with games where you need to plead your case, so knowing that there are different routes to winning (arguing or good set collecting) is awesome. You can follow the Recipe for Disaster here on Kickstarter.

Mantis Falls is a troubled town and the players have seen something they shouldn’t have. Now the mob is after them and if they want to survive they must work together… sometimes. In this semi-cooperative, hidden-role game, the players might all be on the same team, but you can’t always be sure as someone might be dealt an assassin card; turning them into a secret enemy of the group. The witnesses are just trying to stay alive until the end of the game or to manage to kill the assassin. Meanwhile the assassin must manage to kill off one of the witnesses and stay alive until the end. As you play there will be event cards which the players must navigate with their action cards. Of course, if there is an assassin that person will be trying to thwart the other players actions without revealing their identity. 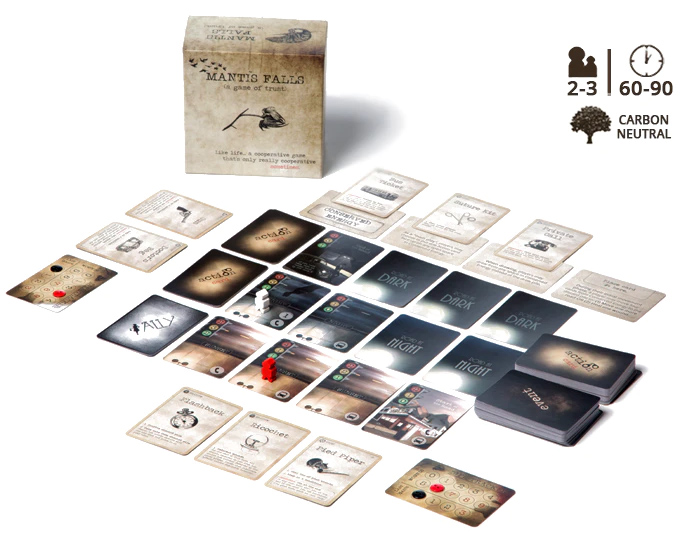 Mantis Falls looks very thematic and tense. You’ll need to play your cards carefully while keeping an eye on your friends/enemies. While we’re not usually big fans of hidden roles games around here, I like ones that can utilize mechanics to help the players mask their identities while still getting to act and Mantis Falls looks like it might pull that off well. Check it out here on Kickstarter to find out more.

RagnaRok Star brings vikings and rock & roll together in sweet, thrashing harmony. In the game, Odin has proclaimed that the best viking band will get to go to Valhalla, which sounds pretty kick ass. The only trouble is, your band has no fans! Using programmatic movement, you’ll need to go port to port, completing challenges, gaining fans, and proving your band is worthy of Valhalla greatness. 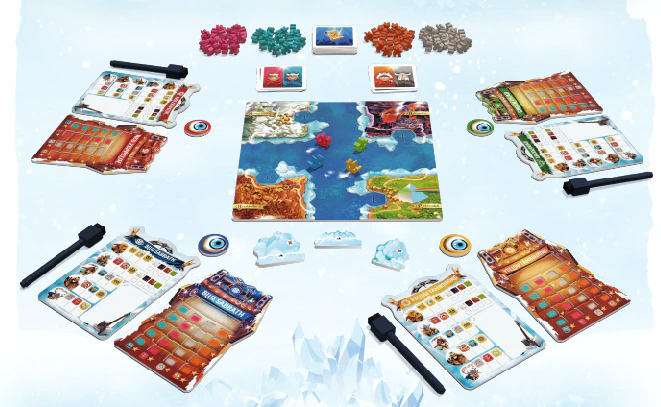 I’m totally into this crazy little mash-up of genres that RagnaRok Star is working with and the music references are delightfully silly. I like that there is a mixture of indirect and direct competition between how you form and block routes to stealing fans from your opponents. RagnaRok Star looks like a fresh take on the viking genre. If you’d like a closer look, check it out on Kickstarter here.