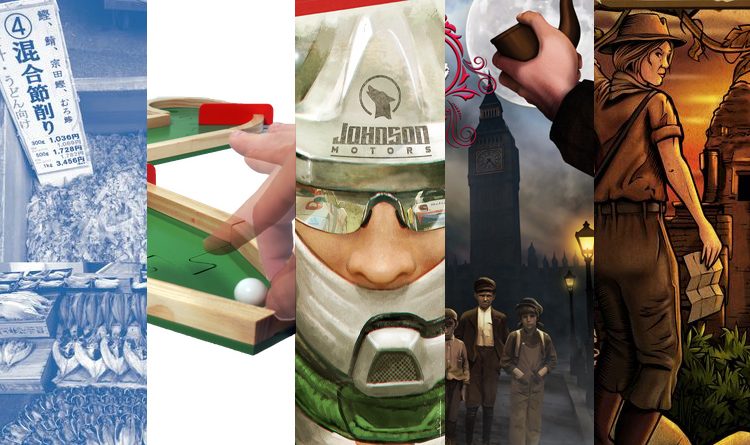 Jess
Kickstarter time! (Sorry for the short into. It’s been a month of a week).

Jordan Draper’s Tokyo Series is a delicate and beautiful exploration of Japanese culture. These tiny games are packed with impressive miniature components that I’ve never seen the likes of. The expansion Kickstarter is for 2 new expansions adding new gameplay to TSUKIJI MARKET and TOKYO METRO.  TOKYO TSUKIJI MARKET is an economic game where players run a fishing company. The expansion adds new markets that allow you to rent ships, auction swordfish, deal with market crashes, and more. TOKYO METRO is a train investment game of worker placement system and spatial strategy. The expansion brings players a new map and action cards to make for a speedier game.

The Tokyo Series is part game and part art. These expansions look like fantastic new additions to the games and if you haven’t picked up the origianls, you can do so through this campaign. Check out the TOKYO SERIES: Expansions Kickstarter to learn more.

I unabashedly love minigolf and dexterity games, so mash these two activities up and you’ve got my attention. Pitch & Plakks is a modular wooden board game where you can create challenging mini-golf courses. The game sets up in a matter of seconds and you’re ready to start flicking holes in one (or ten). The game is composed of chunky wooden puzzle pieces designed to mix and match easily so you can design a variety of courses.

The idea is so simple, but the execution looks fantastic and the gameplay promises to fun for the whole family. You can also pick up the expansion which adds a bunch of newcourse pieces and obstacles. Visit Pitch & Plakks on Kickstarter here for more info.

Based in the Rallyman racing series, Rallyman: Dirt puts the players behind the wheel once again to speed along dirt racetracks to see who can claim the trophy. To move around the track you’ll be rolling Gear, Brake and Coast dice. Of course racing isn’t that easy. Each die has warning symbols and if you’ll lose control of your car if you roll 3 at a time. This can damage your car and increase the time it takes to move around the track. There are also plenty of obstacles to keep you on your toes.

This new edition combines the original Rallyman from 2009 and its expansion: Dirt.; making it the perfect way to get into the game. It features new artwork, upgraded components, and new map tiles. Race on over to the Rallyman: DIRT Kickstarter here to learn more.

The Original Sherlock Holmes and his Baker Street Irregulars

I am a huge Sherlock Holmes fan so The Original Sherlock Holmes and his Baker Street Irregulars had me hooked from the title. Its a simultaneous-play, card-drafting game. Each turn you will have a hand of evidence cards from which you will pick one then pass the hand to the next player. You’ll need to pay for the cards you take with tokens and once you have enough evidence with symbols matching a villain you can arrest the criminal to score points. 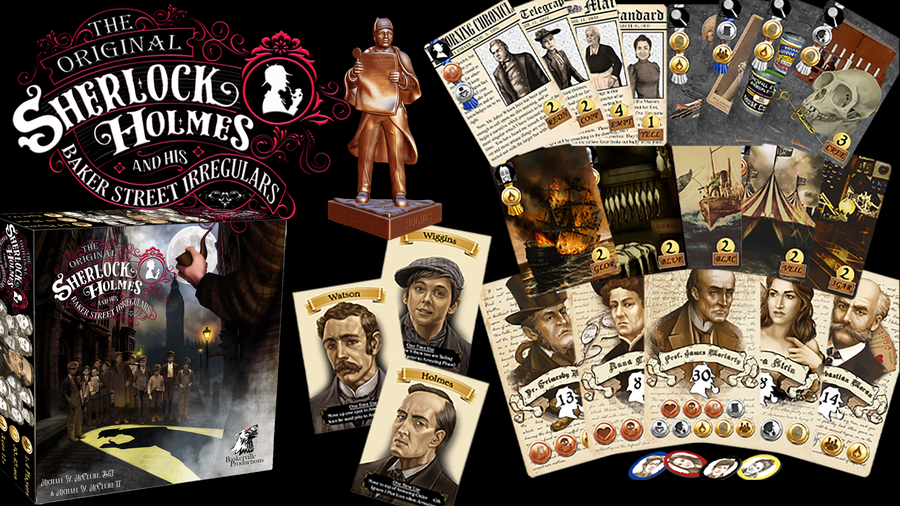 It looks like a lot of the strategy comes down to how you manage your currency tokens and what cards you keep vs what cards you hand your opponents. I expect the game will be quite thinky, but that seems to be quite in line with the theme. Investigate The Original Sherlock Holmes and his Baker Street Irregulars hereon Kickstarter to learn more.

Relics of Rajavihara is a 3D solo adventure game where you take on the role of Virginia Rivers, a thrill-seeker looking to collect up rare and valuable artifacts. You’ll need to make your way through 50 different and challenging puzzles in this exciting campaign-style game. Each level will give you a goal that you must complete by navigating a board covered in 3D crates, climbing over or moving obstacles, finding gems, and ultimately dealing with your arch nemesis. 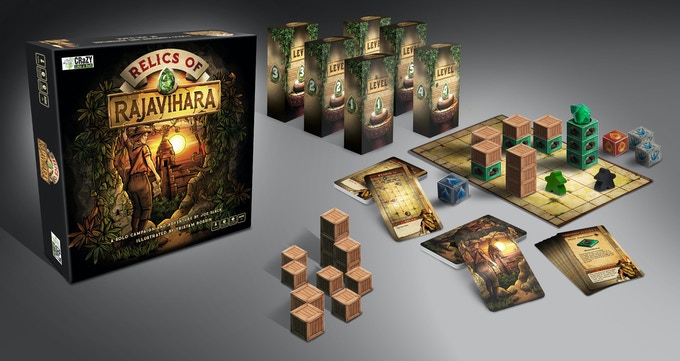 I like that game uses 3D blocks as it makes visualizing the puzzle easy and you can manipulate the blocks just like your character would be. The game is geared towards ages 12 and up, but I suspect that if a parent were to assist, a younger player could have a lot of fun with this game. Discover more about the Relics of Rajavihara here on Kickstarter.